FUDGE AND THE MAGIC BOOK BY KEN REID - PART TWO 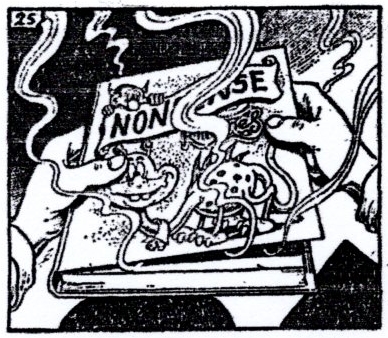 Part 1 of my account of Fudge and the Magic Book by Ken Reid ended at the point when the two elves completed their mission in Imaginatia and were ready to go back to the World of Reality. This is where Ken’s story turns even more surreal and absurd…

First, the two elves had to cross the Darkness of Doubt: 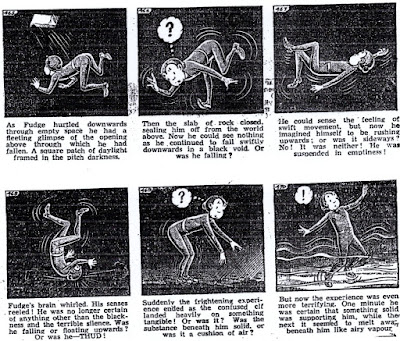 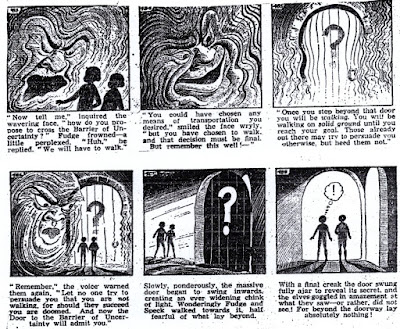 Fudge and Speck stepped through the door and were faced with absolutely nothing, or, as the Keeper of the Door described it – the thought plasma… I like the sequence of panels below: 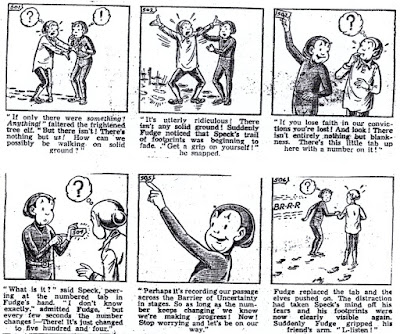 The nothingness proved to be not so empty after all: there were all sorts of people traveling there by all kinds of means, but it turned out they all lacked confidence in their reality. The first one was a motorist who met an old skipper on a motor boat. The skipper mocked the motorist out of his conviction that he was driving on paved road, and this is when the true meaning of the warning issued by the Keeper of the Door revealed itself: as soon as the motorist got persuaded he was at sea, he sank together with his car!

Moments later, the skipper ran into an airplane, and after a short discussion the pilot made him believe he might be ‘sailing’ at an altitude of 15,000 feet, and as a result, the skipper’s flying boat went into a sudden nose-dive.

Droning on, the plane pilot bumped into a deep-sea diver who persuaded the pilot that he was flying his plane 20 fathoms underwater. 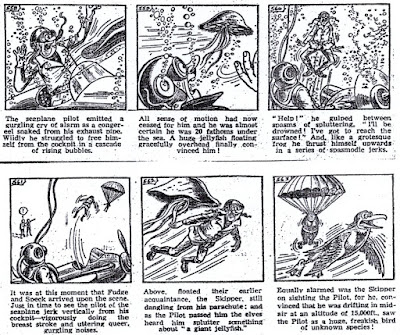 And finally, the deep-sea diver met an Austrian mountain climber who shook the diver’s conviction about being underwater, causing him to plunge down a 15,000 feet drop.

Fudge and Speck witnessed all the disasters while trudging across the Barrier of Uncertainty and firmly hanging on to their convictions that they were walking on solid ground. It turned out the mountain climber was only half-convinced he was on top of a mountain, and, seeing the elves’ footprints, he took one step forward to test what he believed was thin air: 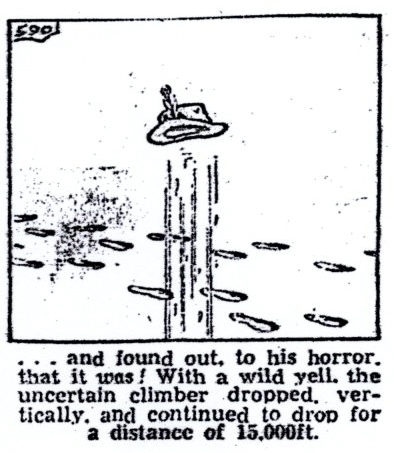 Fudge and Speck finally made it home to the Leafy Wood. They used the magical properties of the Two-toed Twale’s nail to whisk Hoppity and the old witch out of their Nonsense book and then walked to Hoppity’s house to attend to the final order of business – subdue the Nonsense characters that had taken possession of Hoppity’s residence.

The elves were confronted by two fierce defenders of the house – the Telephant: 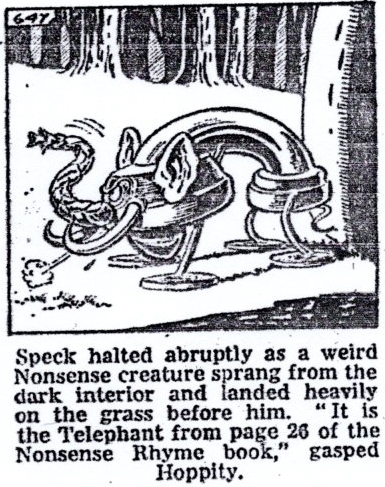 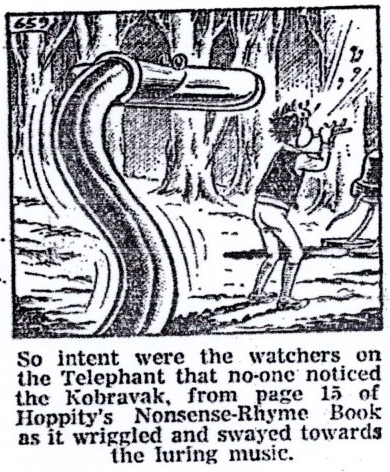 but Fudge prevailed and the tale reached its happy end. 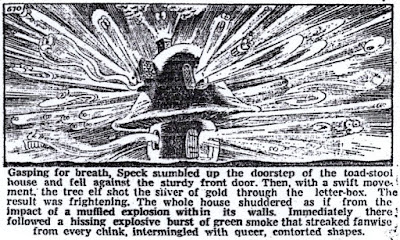 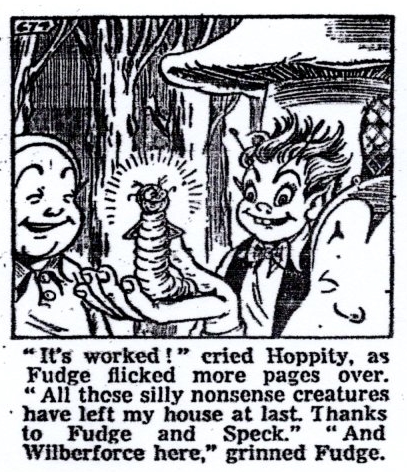 The Book of Nonsense Rhymes and its weird characters remind me of Ken’s Creepy Creations collection by Rebellion. I deliberately included the names and images of all those weird creatures featured in the story to illustrate my point. It is also fun to see familiar face expressions and figures from Ken’s comics work of the late 50s and the early 60s (Jonah, Ali Ha Ha and the Fourty Thieves, etc.). Some panels even remind me of Queen of the Seas and The Nervs, which of course were still years ahead in the future at the time when Ken created Fudge and The Magic Book. The story itself is very good and I think it would make an excellent feature film!

Patrick has one more Fudge story that he will post to me in the near future. He doesn’t know the title, and I very much hope it is one of the later adventures, similar in style to the one covered in the last two posts here.

And if you are a fan of Ken Reid, click on the POWER PACK banner in the right-hand column and get your copy of the POWER PACK OF KEN REID - the deluxe two-volume set of Ken’s strips in WHAM!, SMASH! and POW! comics of the ‘60s.

Email ThisBlogThis!Share to TwitterShare to FacebookShare to Pinterest
Labels: Fudge and Speck, Fudge the Elf, Ken Reid, The Power Pack