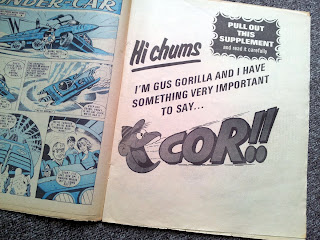 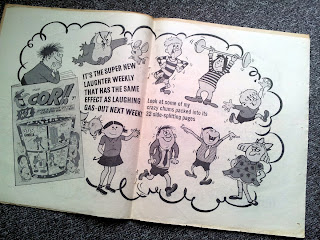 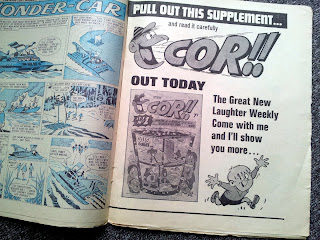 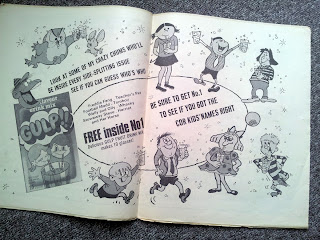 WELCOME TO COR!! THE LONG-LAUGH COMIC THAT IS TOO GOOD TO MISS!


COR!! arrived on the newsstands in the early summer of 1970. Edited by Bob Paynter, it was the second weekly humour title after Whizzer and Chips published by IPC Magazines. The premiere issue had an eye-catching cover drawn by Mike Lacey and came with a sachet of fruit-flavoured lemonade powder for a free gift, enough to make 10 glasses.  “Have a drink on us!” read the sign beneath the screaming masthead. Check out these pictures of the free gift as it looked glued inside the paper. Thanks to Phil Shrimpton (a.k.a. phil-comics on eBay) for the images! A fine copy of COR!! No. 1 with the free gift fetched a whopping amount of £659.00 on eBay in April 2014! 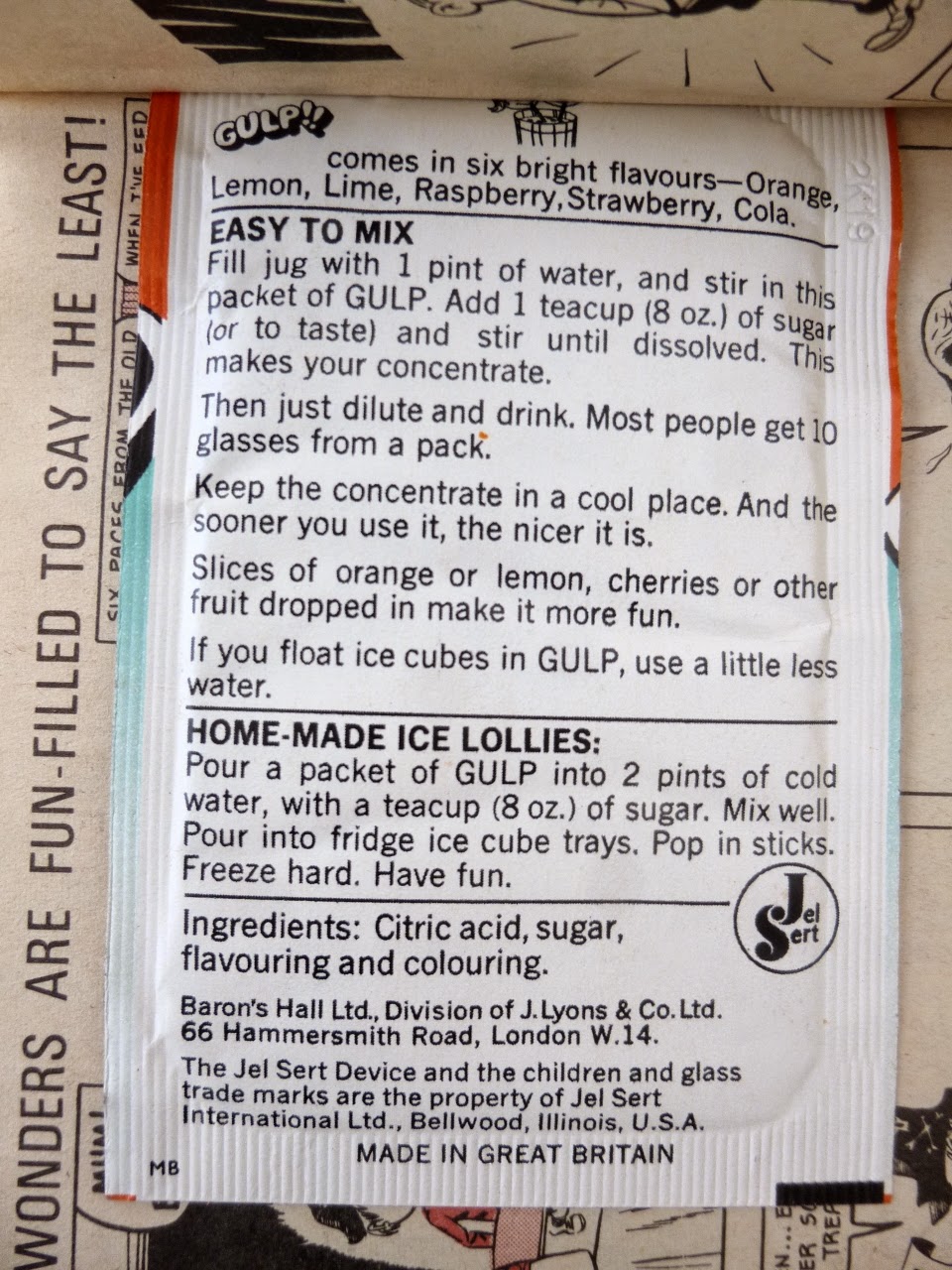 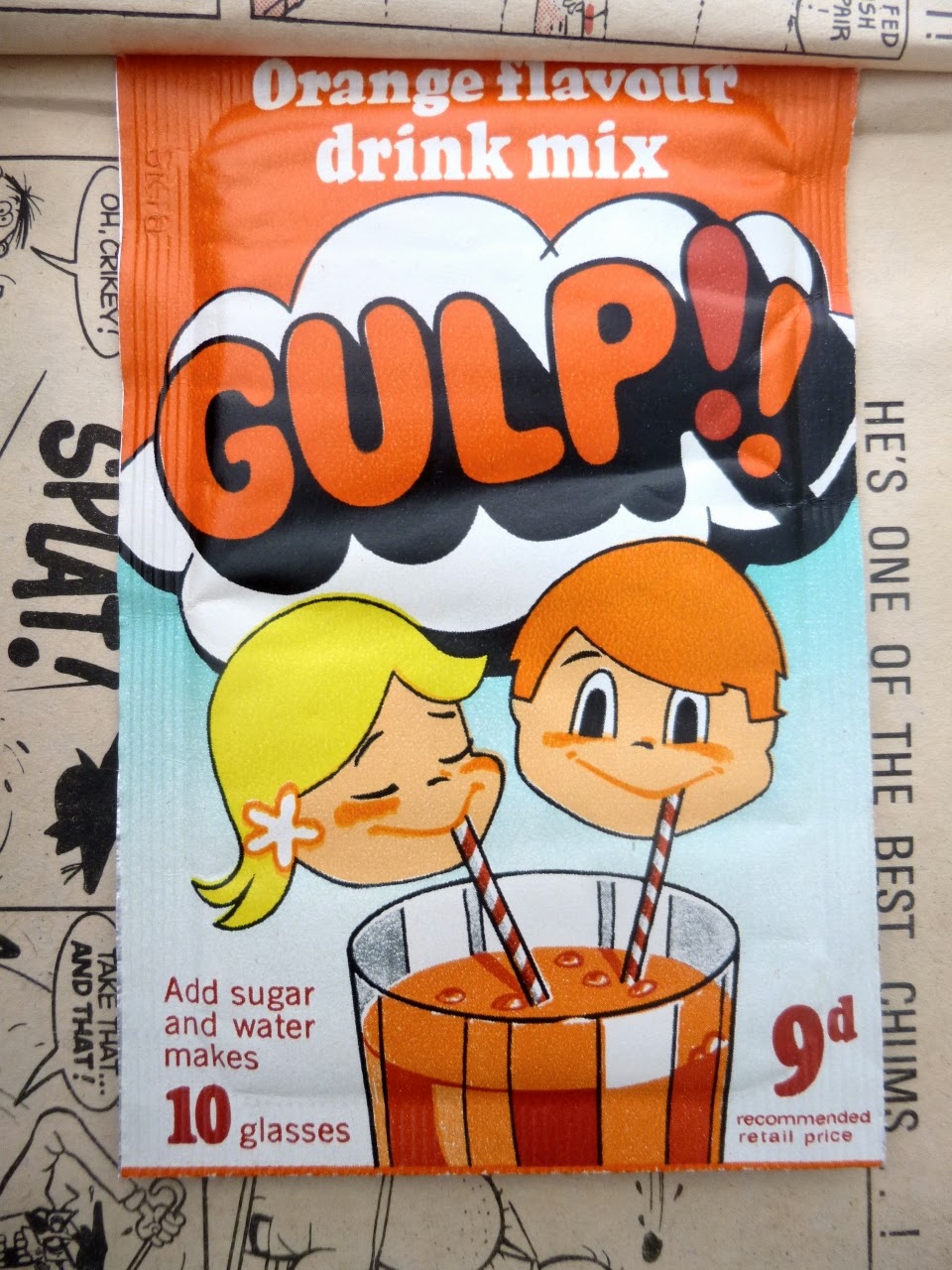 In his excellent website Dez Skinn, the then sub-editor under Bob Paynter, explains that for IPC that was known for its strict “offend nobody” policy the choice of the title was quite controversial: the Cockney slang word “cor” – as in “cor, blimey!” – derives from “God, blind me” so, unbelievably, the puritanical and mighty IPC was actually launching a nationally distributed comic named GOD!! Dez Skinn recalls that they were so tickled by this that a private mock-up was produced with GOD!! as the title logo, the free lemonade powder cover mounted gift receiving the revised text of “Have a drink on God”.

Like Whizzer and Chips launched merely a few months before, Cor!! contained a mixture of traditional British children’s humour strips and some adventure stories with the former outweighing the latter considerably in terms of page count. The combination was common in other Fleetway/IPC comics of the period but titles like Smash! and Valiant presumably were aimed at a slightly older audience and had more adventure strips, while in Buster the ratio was approx. 50 : 50 at the time.

Story ideas of the majority of humour strips in Cor!! weren’t very original: Gasworks Gang exploited the well-familiar theme of a group of naughty school-boys and their teacher (talk about Bash Street Kids, The Tiddlers, etc.), Tomboy was a mischievous boyish girl who was a headache to her parents and pretty much everyone around her (sounds like Beryl the Peril or Minnie the Minx, doesn’t it?), Parallels can be drawn between Tricky Dicky and The Beano's Roger the Dodger.  Another large group of strips could be described as stories about kids with something special about them, be it their peculiar friends, talents, obsessions or hobbies; titles of the features spoke for themselves: Andy’s Ants, Chalky, Football Madd, Swopper Stan, Jelly Baby, Zoo Sue, Jack Pott, Jeanie and her Gennie, Val’s Vanishing Cream, Wally's Weirdies, etc. They must have been quite a strain on writers’ imaginations.  Hire-A-Horror was one of those horror-themed comic features that were so popular throughout the 70s; it was in more ways than one like Rent-A-Ghost in Buster. Ivor Lott and Tony Broke was a new concept in the sense that it exploited opposition between the rich and the poor. The theme later became a recurrent one in many IPC strips elsewhere. The Slimms was quite a clever parody of dieting. Jasper the Grasper was another fresh idea that hadn’t been used much before in UK humour comics.

Adventure strips weren’t plentiful, but they surely were very appealing to the eye: Kid Chamaleon painted and printed in full colour occupied the centre pages for nearly two years; Rat-Trap was also popular with the readers and appeared in nearly 100 issues. Then there were The Goodies – a strip that is somewhat difficult to categorise: it was adapted from a popular TV comedy series and was another great addition to the package.

The team of artists who worked on Cor!! consisted of IPC's top talent including Terry Bave, Reg Parlett, Frank McDiarmid, Joe Colquhoun, Mike Lacey, Graham Allen, Trevor Metcalfe, Robert Nixon. etc. In many strips the quality of art and the level of detail was outstanding, and IMHO Cor!! must have been a very appealing package to the young reader back in the day. Listing through the pages and looking at all the fine artwork, I can’t help admiring the high regard that the editors and artists had for their audience of 10-or-so-year olds; IPC firmly upheld this attitude towards its junior readership throughout most of the 70s.