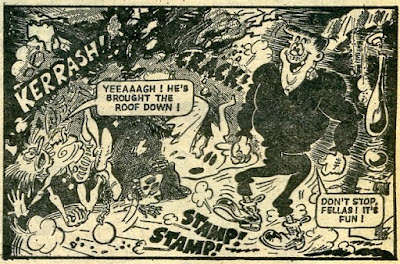 When SHIVER AND SHAKE merged into WHOOPEE! in October 1974, Scream Inn and Frankie Stein were among the strips that confidently made it to the combined paper. A few weeks after the merger Frankie Stein stopped by at the spooky inn and tried to win the million quid. Brian Walker was a very good imitator and his Frankie looked very much like that by Robert Nixon. It’s a shame the printing presses used by IPC at the time often failed to present beautiful artwork decently. The episode is from WHOOPEE! AND SHIVER & SHAKE cover-dated 23 November, 1974 (No. 38). Followed by both pages of the Frankie Stein strip from that same issue, by Robert Nixon, of course. 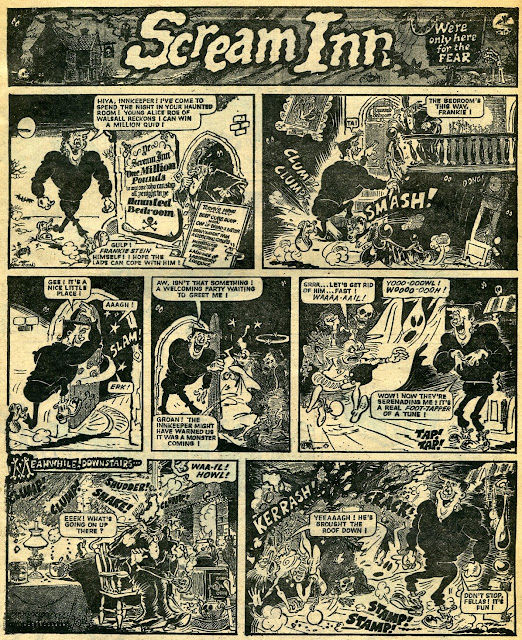 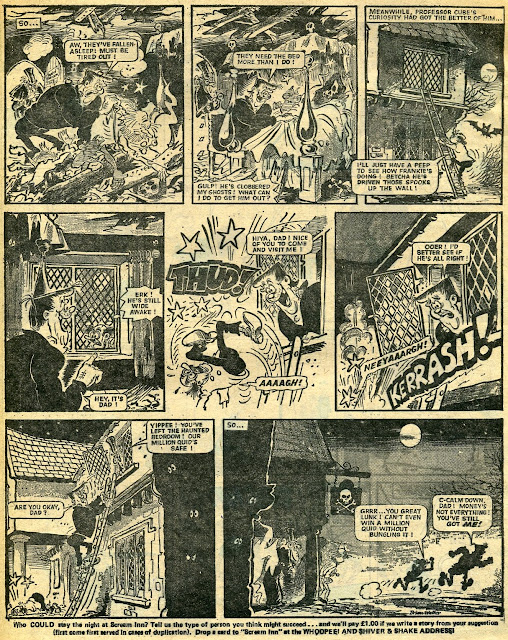 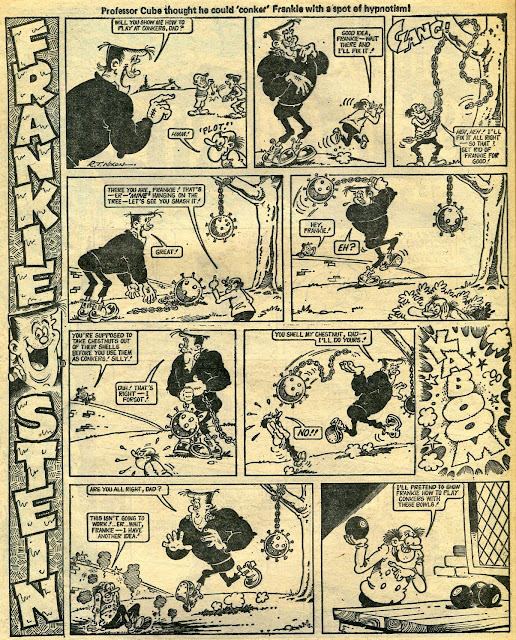 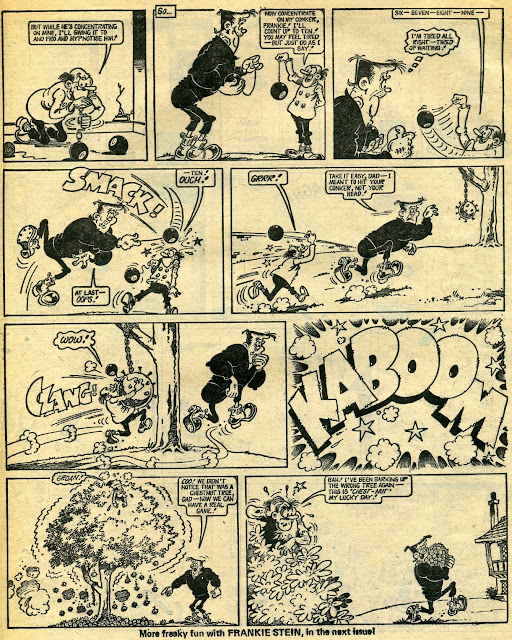 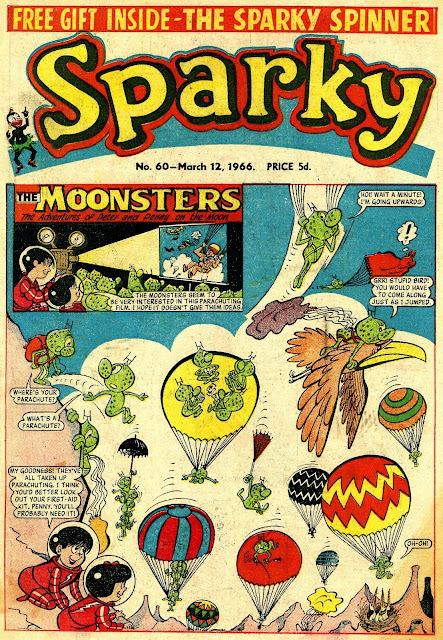 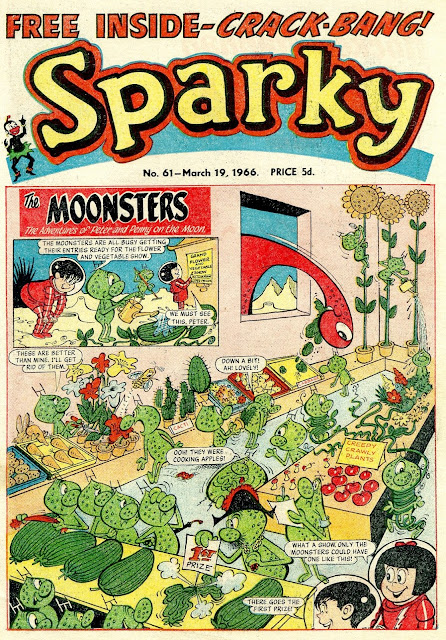 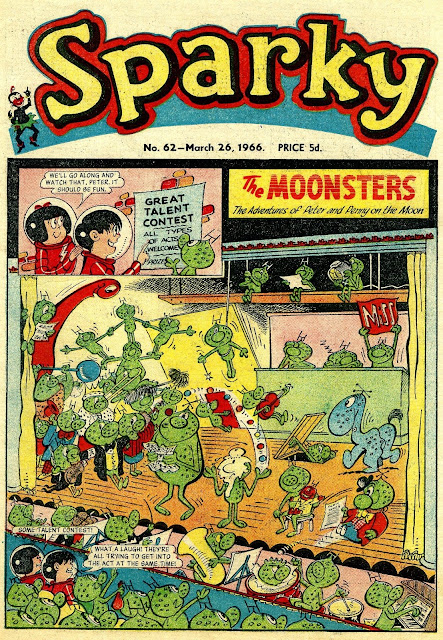 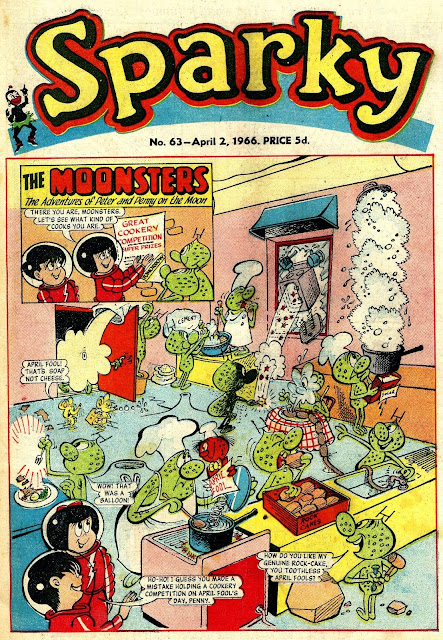 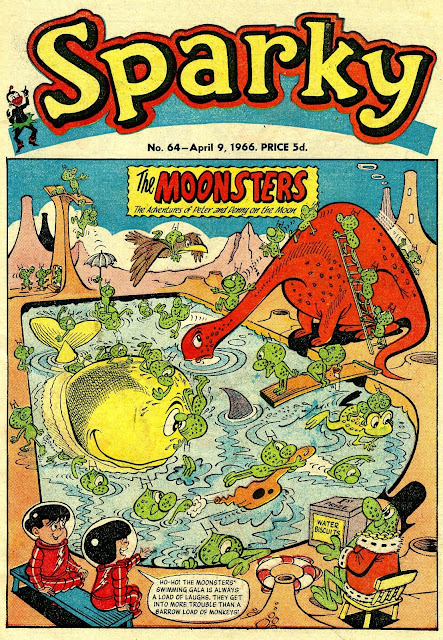 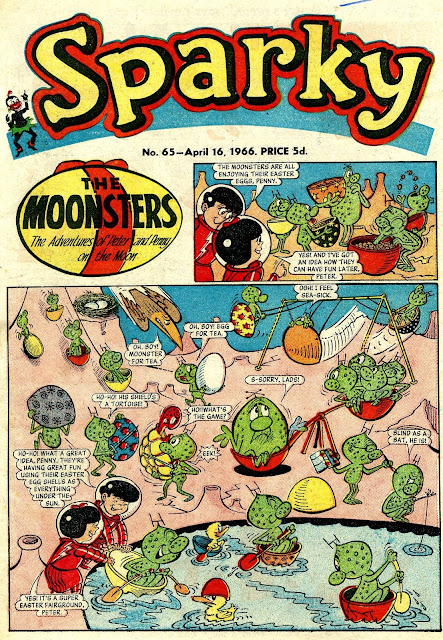 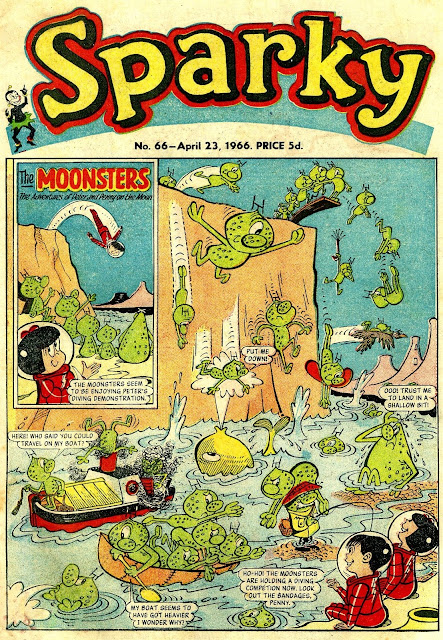 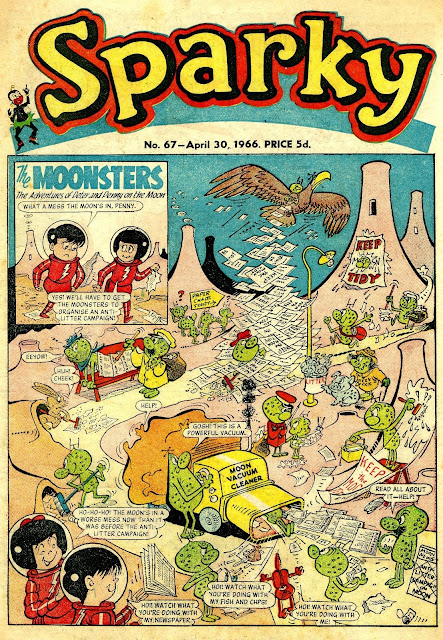 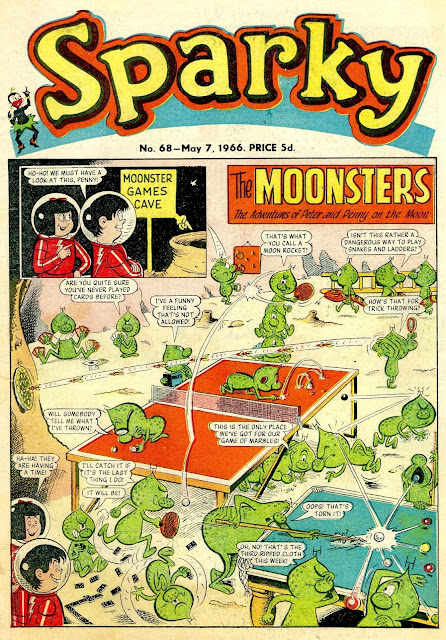 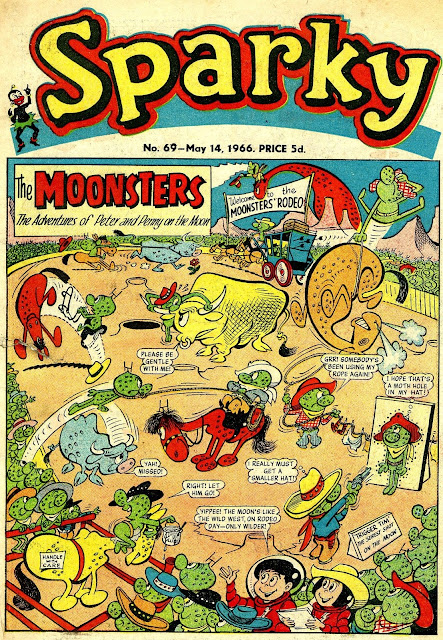 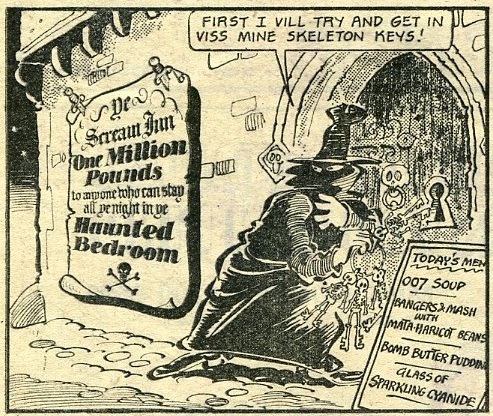 Shiver and Shake merged into Whoopee! in October 1974 and Scream Inn was one of the strips that found its way into the new paper with the clumsy title of Whoopee! and Shiver & Shake.

The first guest appearance in Scream Inn can be found soon after the merger, in the issue cover-dated 26 October 1974 (No. 34), and it was quite an unusual one indeed. That week’s guest looked a lot like I Spy from SPARKY comic published by DCT. I believe this is one of very few examples in British comics when a character appeared in a rival publication produced by the competitor. Brian Walker illustrated I Spy starting from SPARKY issue No. 300 (17 October 1970), so the inclusion of a look-alike into the episode of Scream Inn in Whoopee! and Shiver & Shake (published by IPC) must have been a cheeky experiment on his part. Here is the episode, followed by the three-page set of I Spy from SPARKY, the first one by Brian Walker. 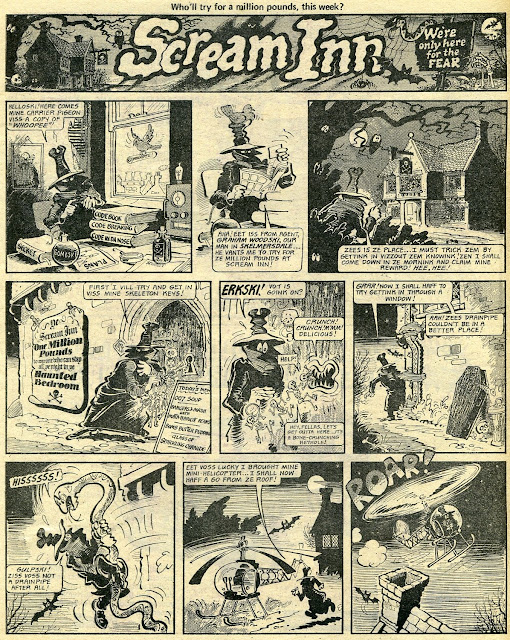 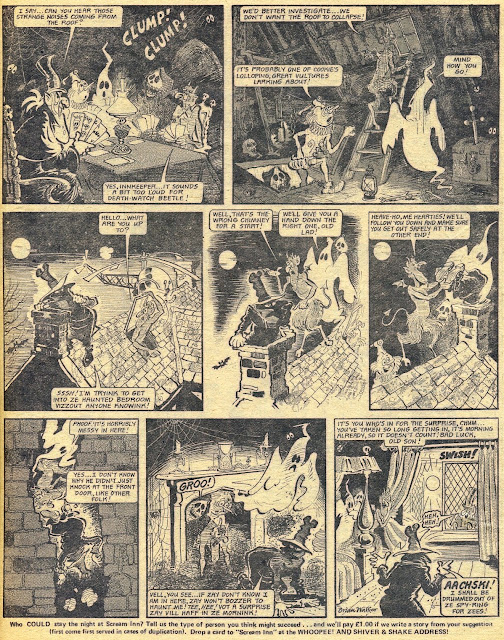 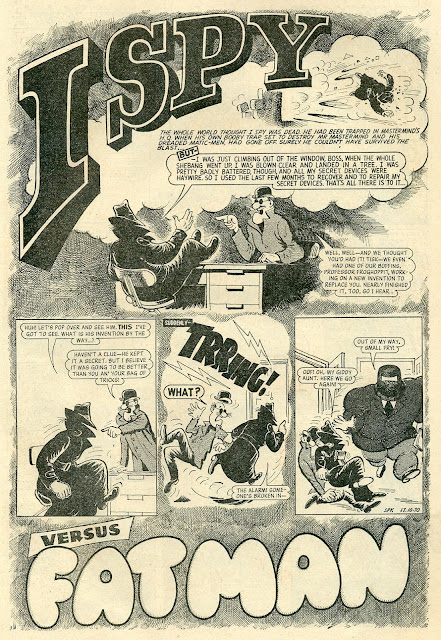 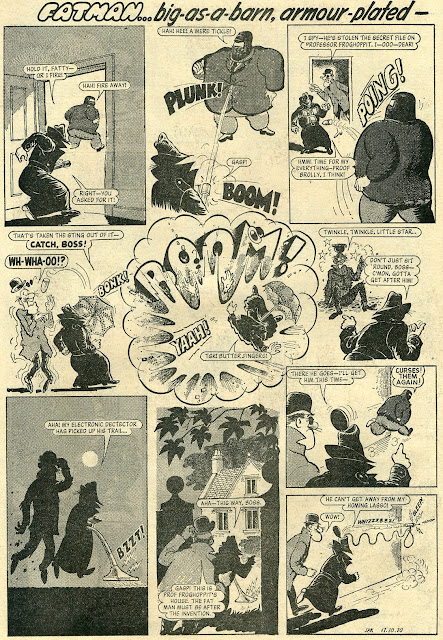 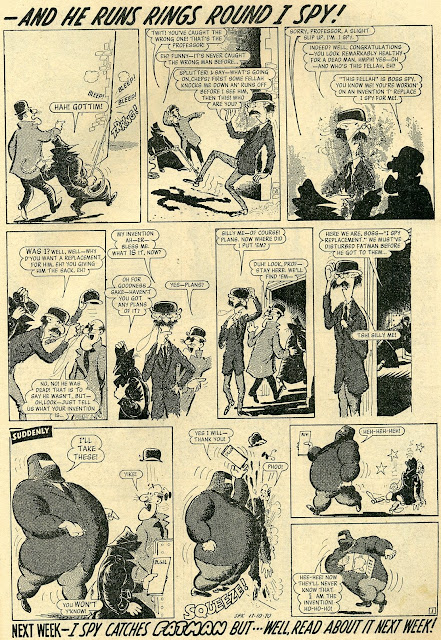 While we are on the subject of SPARKY’s I Spy and cheeky sneak-ins by Brian Walker, who is that bespectacled bloke in the top right corner of this panel of Scream Inn from Shiver and Shake issue 51 (February 23rd, 1974)? 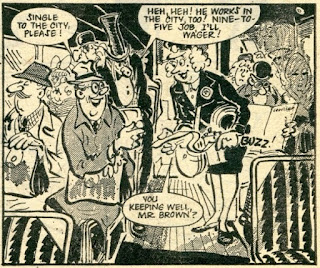