Dough Nut and Rusty offered the readers of MFC a glimpse into the future – the scene of the strip was set a quarter of a century ahead of 1975 in the year 2000 (let us ignore the episode in MFC No. 13 which said it was 2075; issue No. 13 contained quite a few odd surprises and deserves a post of its own which I will do near the end of the MFC series).

The Posh family advertised for a butler’s position at the Posh mansion and received two applicants: 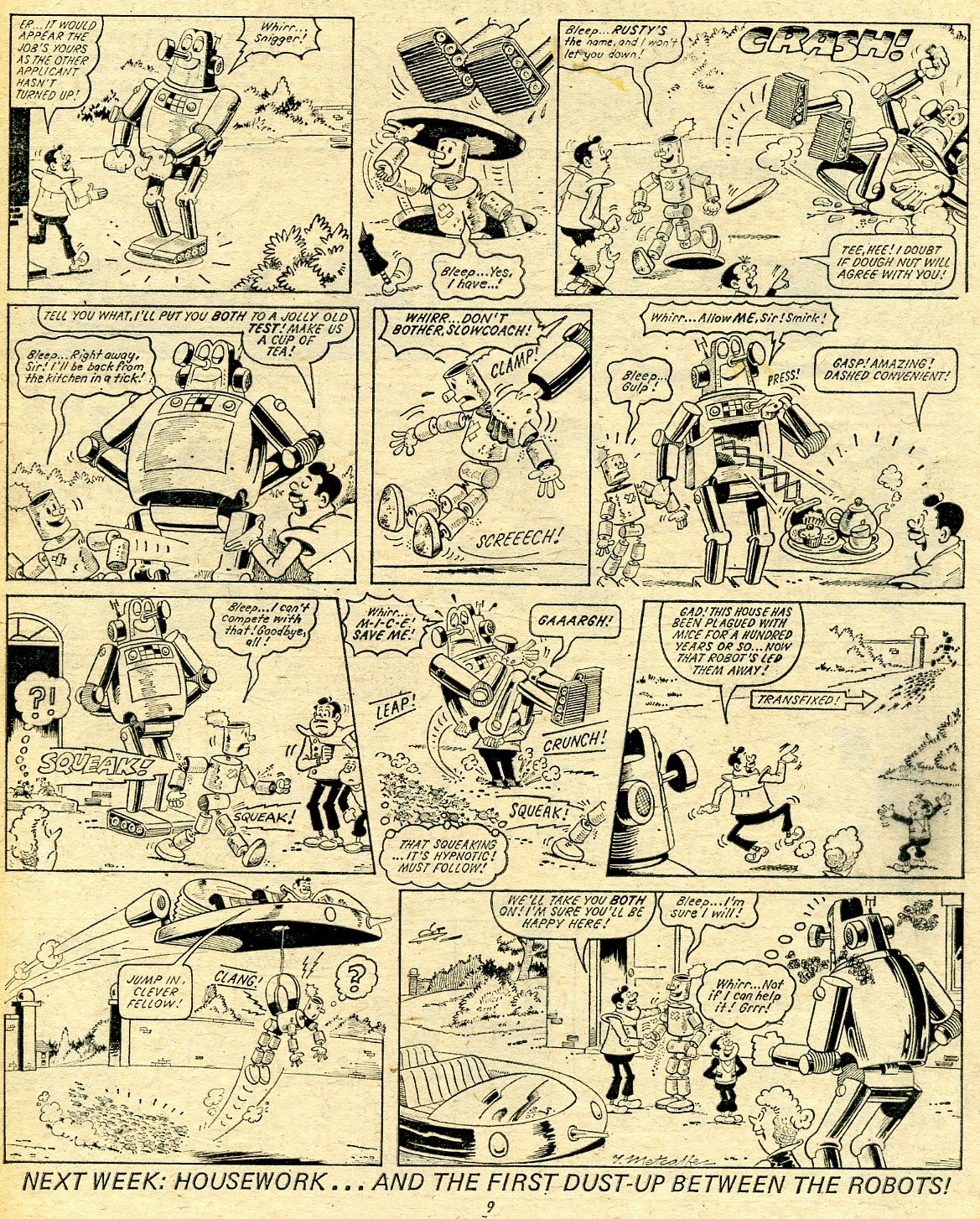 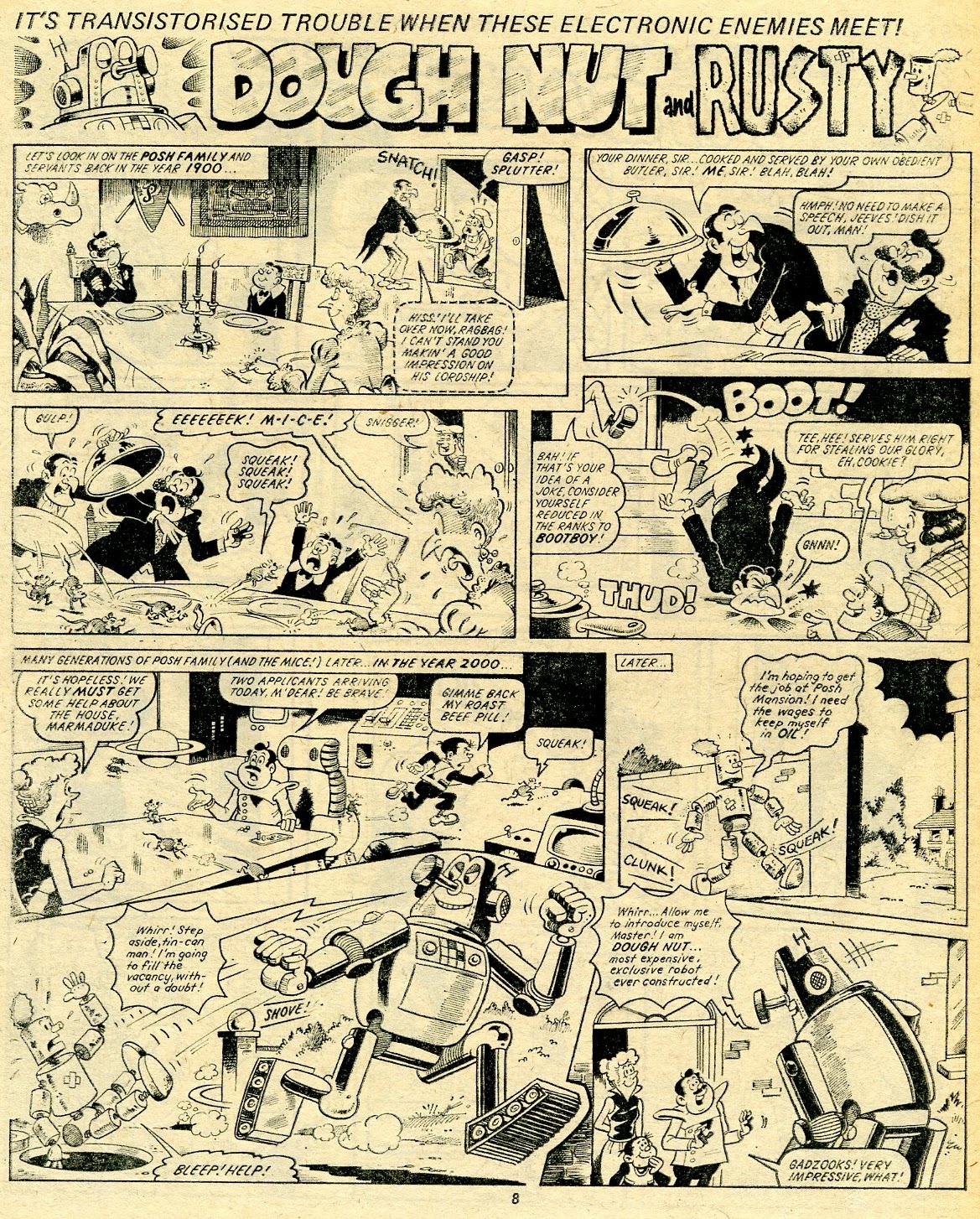 Dough Nut was a super modern brand-new shiny robot that spoke with a smooth whirr-sound. He was efficient and expensive (actually, the most expensive robot in the world, according to his own words), equipped with a huge arsenal of labor-saving gadgets and other surprises, such as telescopic/hydraulic hands and legs, a radar scanner, a sonar device, an inbuilt instant fryer, an adverse weather excluder, built-in miniaturizing/giantiser rays, a disintegrator gun, a laser beam, a super-strength fertilizer ray, a photo camera, a video camera, a trick camera, etc. etc.

Rusty was an old bleeping machine from the early seventies (i.e. the times of MFC) and had nothing fancy to offer. He was just a grubby robot with a rusty tin-can for his head, but he was the one with a brain and a heart, plus he had the advantage of first-hand experience and good memory of all the favorite pass-times of both children and grown-ups in the seventies, and it so happened that the Poshes were very fond of the old times they knew so little about. 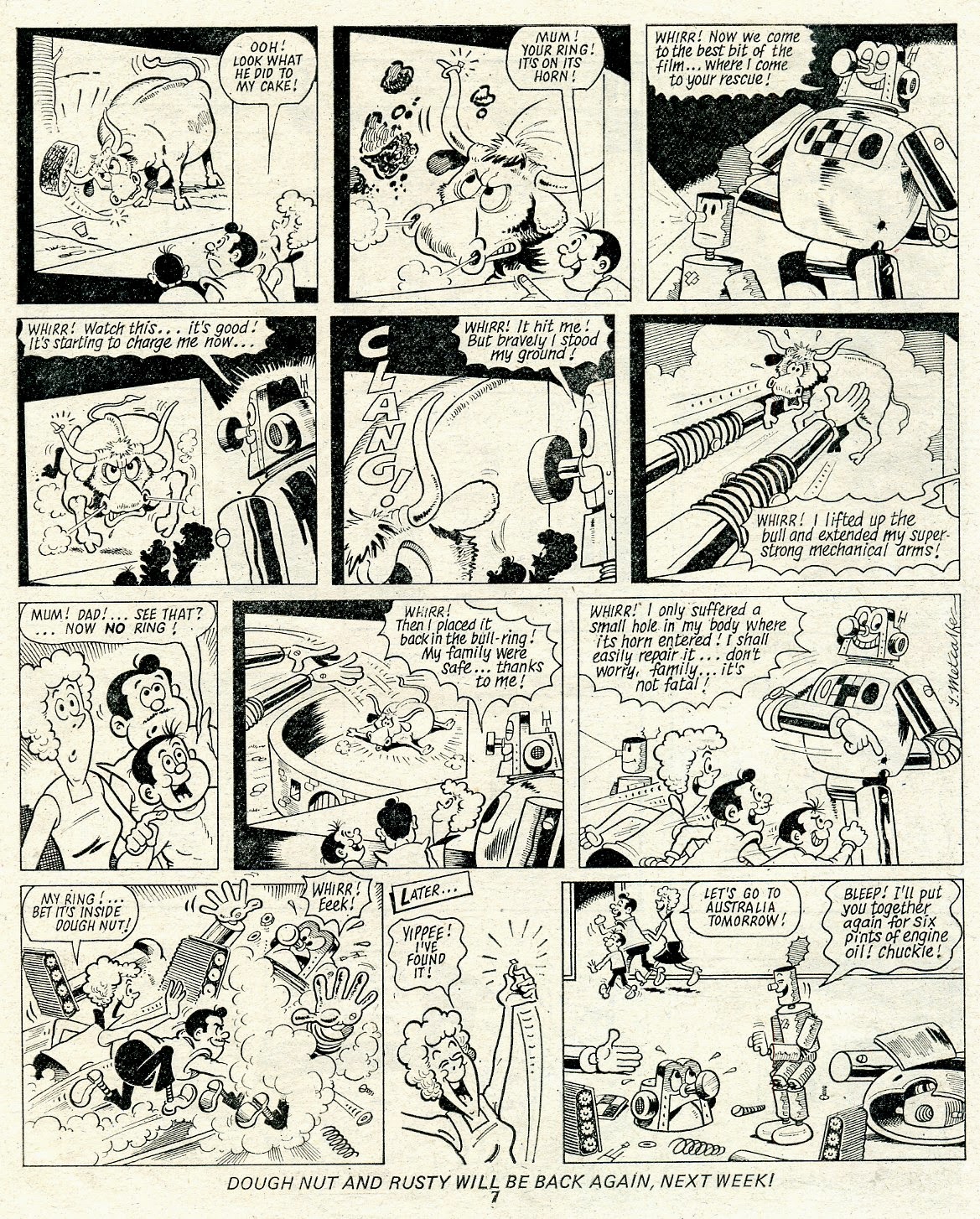 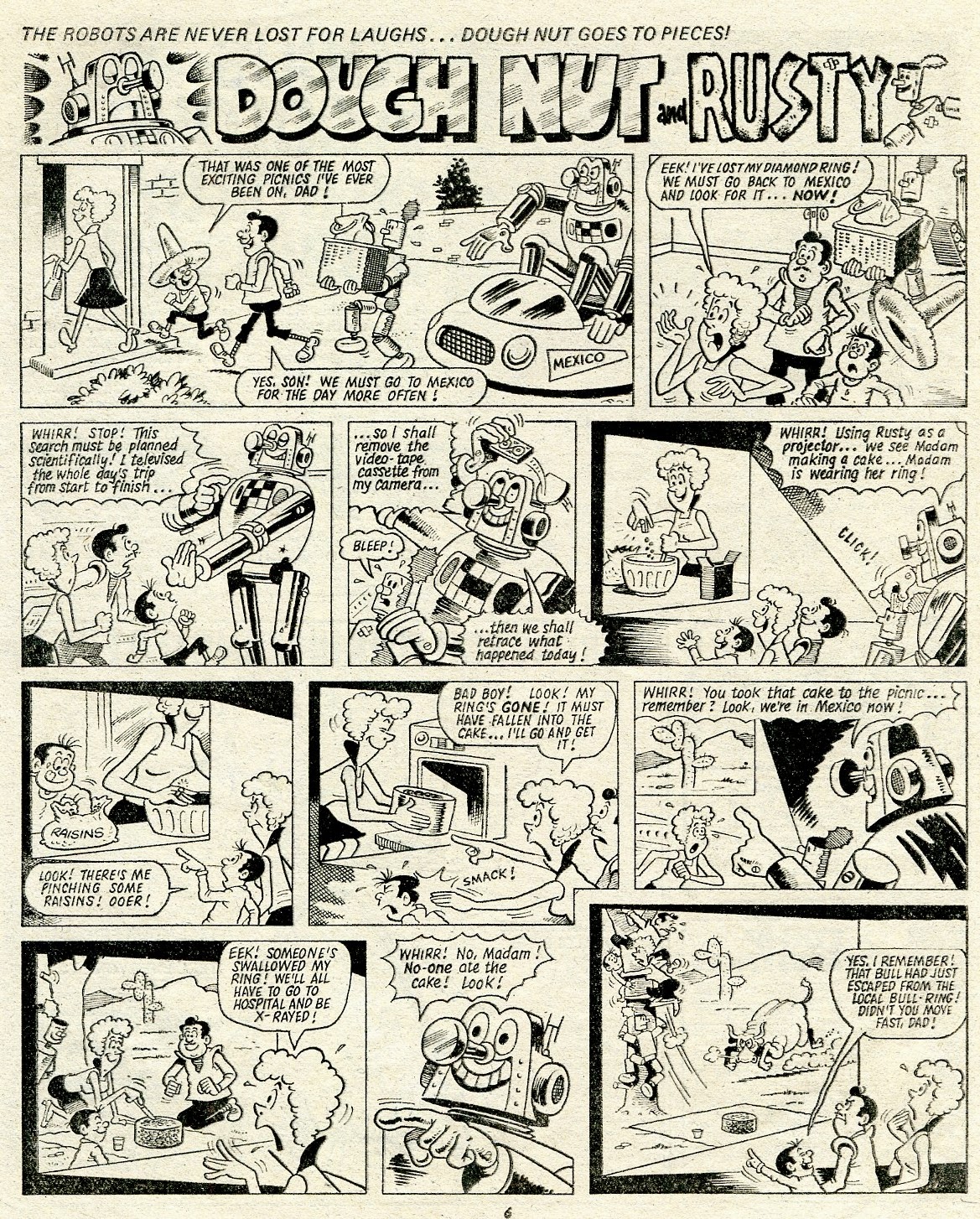 Rusty was a good-natured little piece of engineering who was genuinely eager to be a good servant to the Poshes and earn his wages to keep himself “in oil”. Dough Nut’s main motivation was to be in the good books of his masters, he was a pompous and egocentric figure, very eager to be praised and appreciated. Dough Nut always saw Rusty’s efforts to serve the masters and as attempts to get into their good books and undermine Dough Nut’s position. That’s why he was always mean to Rusty, calling him names (tin-ribs, tin-brain, tatty tin fool, interfering heap of tin, etc.), trying to show him up and take credit for his good deeds and smart ideas. It wasn’t uncommon for Dough Nut to turn violent on Rusty and smash him to pieces. Needless to say, however, Rusty always came out on top. His knowledge of the past often came in handy because both Sir and the young Sir loved to play long-forgotten games of 1975 (like conkers, cricket, cowboys and Indians, etc.) and eat old-fashioned foods (like fish and chips wrapped in newspaper) that were Rusty’s specialty. Dough Nut also tried his best to oblige but always made a fool of himself because his knowledge of the old times was computer-based and he never got things right. 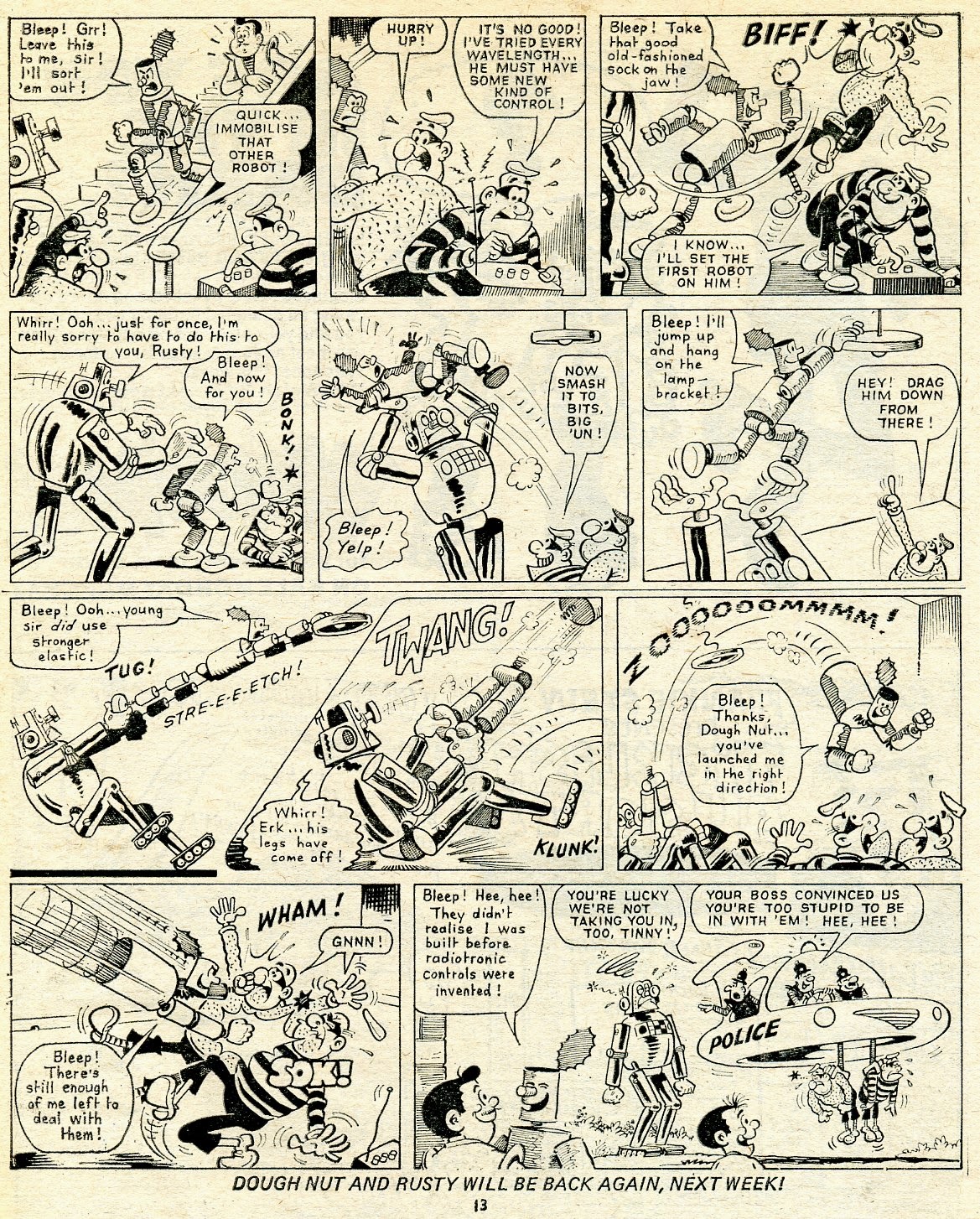 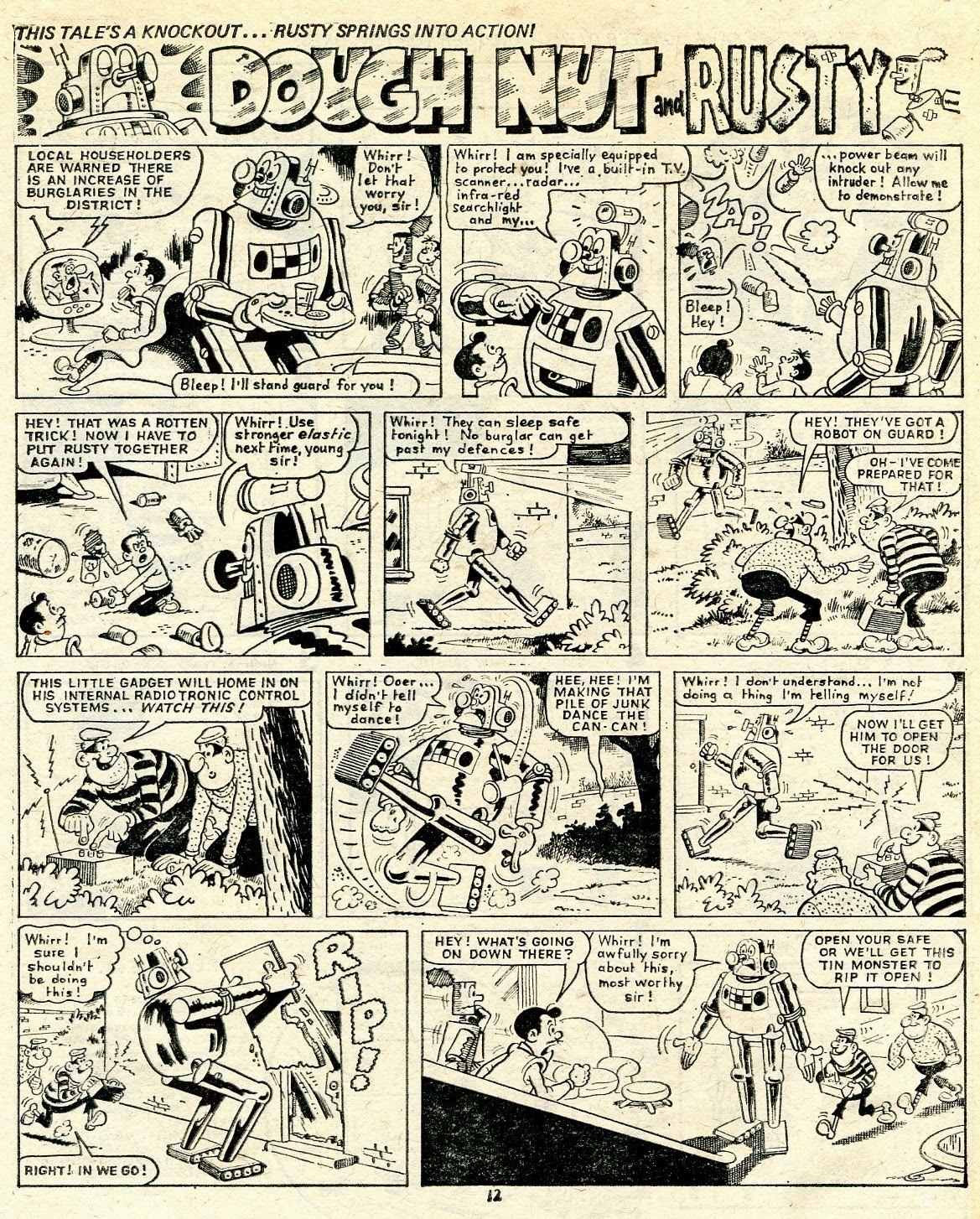 Dough Nut and Rusty occupied two pages and was illustrated by Trevor Metcalfe (save the odd episode or two when someone else ghosted him). Mr. Metcalfe signed nearly all of the episodes. You can read more about it the short interview with Trevor further down this post.

Both robots can be seen on the front cover of MFC issue No. 2 and they got their own poster in No. 27. 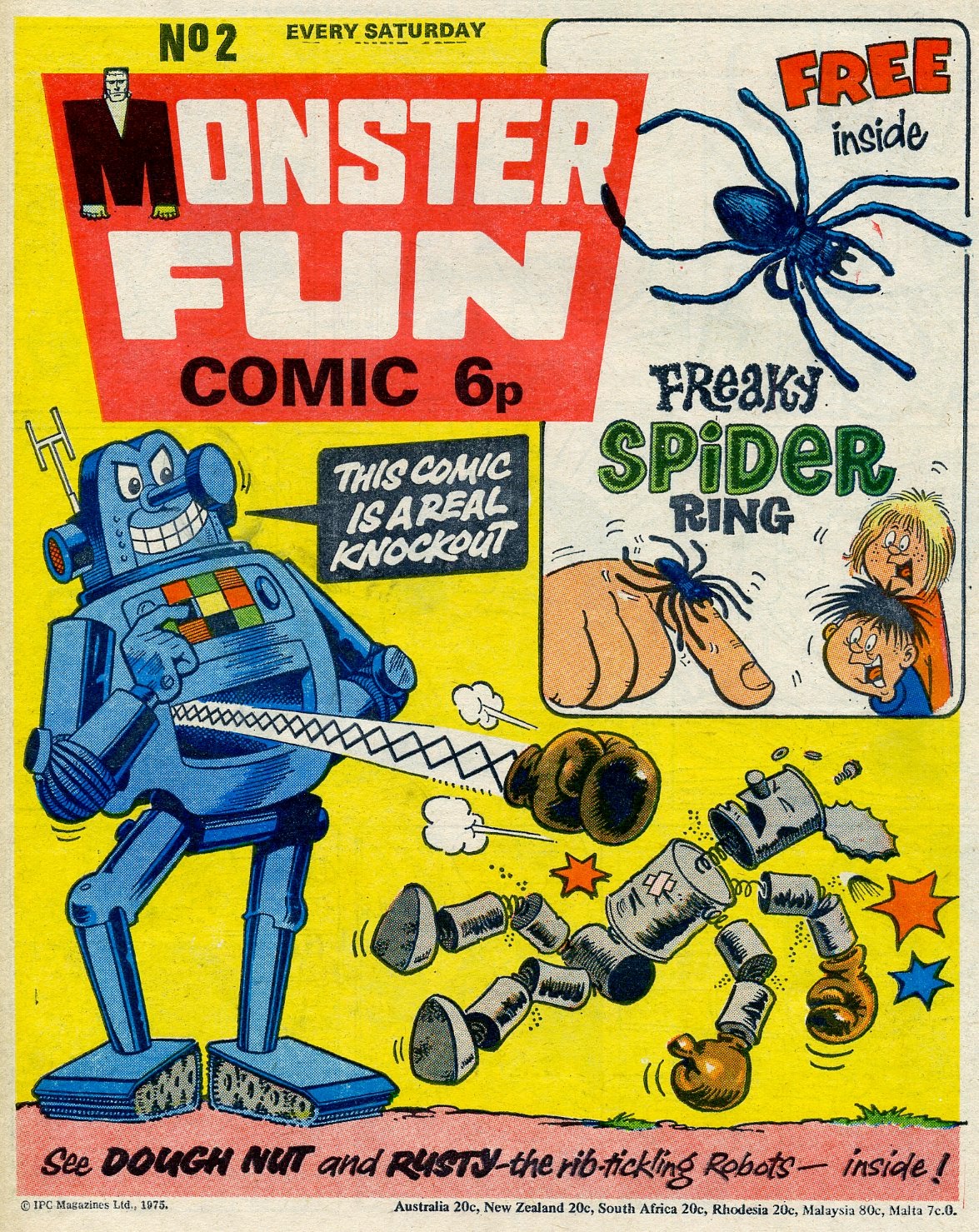 What puzzles me slightly is the connection of the strip with the horror theme because I just can’t see it. Perhaps robots fell into the category of monsters by the standards of those days…

The episode in issue No. 6 featured a well-known media personality whose appearance in a children’s paper looks so inappropriate from today’s perspective…

I am happy and proud that Trevor Metcalfe is a Member of this blog so I contacted him with a few questions about the strip and his IPC work in general. Here is what he had to say on Dough Nut and Rusty, his drawing speed at the time and IPC policy of not allowing artists to sign their work, or more precisely, how that policy came to an end:

The idea and title was put to me by the managing editor of comics at IPC when he invited me to draw the strip. The editor was Bob Paynter at the time. The concept was a tried and tested formula for story lines, used over many years. Basically, poor kid/rich kid, toff v tough, haves v have nots, posh car v scrap car etc etc. In other words the big shiny robot with all the gizmos versus the tatty small and rusty robot made out of old tin cans, would be a sure-fire winner!  That was the plan anyway.  I don't remember the names of any of the scriptwriters I'm afraid, it's a shame they never got any recognition for their important contribution to comic creation. I enjoyed drawing the strip very much, as I did with all the many strips I worked on over the years.

It took me an eight hour day to draw a finished page of comic strip for an IPC weekly comic, rather less time for annuals and summer specials because there were less frames per page.

I live in Hampshire now, but in about the summer of 1972, I was still living in Guisbrough, Yorkshire, only a couple of streets away from my late dear friend Bob Nixon.  It was at this time that Bob Paynter (Editor) was in nearby Middlesbrough visiting a printing works to arrange for them to print a planned summer special. So Bob Nixon and I spent an hour or so with our jolly editor at the printers with a few beers to follow in a local pub.  It was there, where we cartoonists persuaded Bob to allow us to start signing our work. There was a little resistance to the idea at first, we were told that if we did it, everyone would want to sign their work too. We pointed out that nobody would want to put their name to a bad piece of work and therefor the practice would raise standards. This argument won the day, so my next piece of work, I signed.

That's the first time I've related that story in print!  I've mentioned it verbally to a few folks when asked about it.

Be sure to visit Trevor’s webpage HERE.
Posted by Irmantas at 7:05 AM 5 comments: