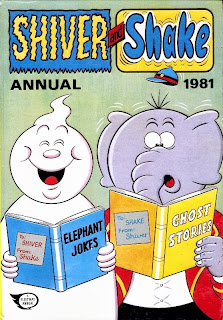 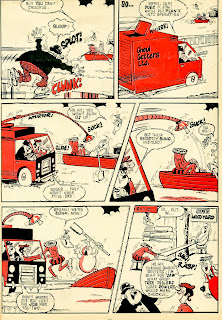 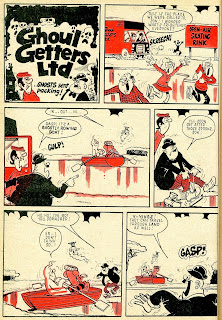 All 6 sets of Sweeny Toddler are by Tom Paterson. They are either reprints of the episodes from WHOOPEE!, or possibly new material drawn especially for this Annual. Here is one: 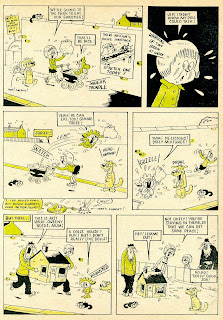 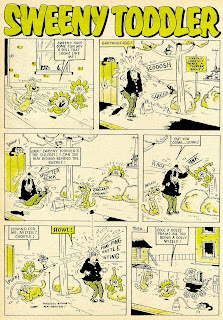 In the new episode of the Forest Legion Boss and Butch have a clever plan how to sneak into Lord Stately’s home and rob the Lord. The plan involves joining the Lord’s hunting party, bagging a fox and getting invited into the house. Needless to say, the legionnaires derail the plan once again. 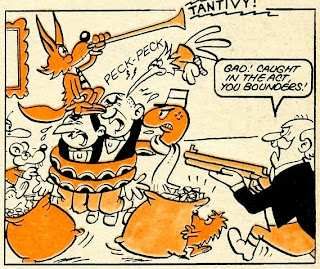 The episode of Shake is interesting in the sense that it plays the theme of the old and long-forgotten rivalry between Shiver and Shake. I wonder how many readers of the Annual still remembered the times when the comic was a two-in-one package, like Whizzer and Chips… 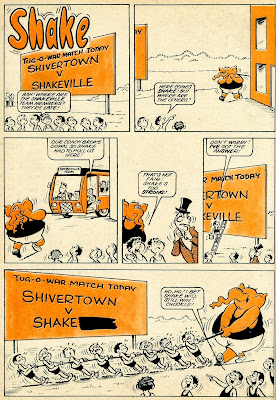 The Ghoul Guides is the only new strip included in this Annual. It tells the adventures of two scout guides who are in fact young witches. In the first tale they try to earn their medical badge and in the second – their needlework badge. Illustrator unknown. 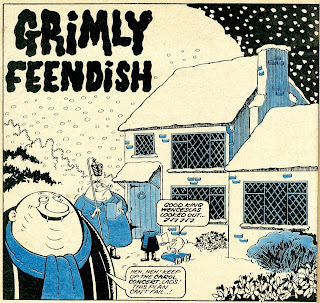 Grimly Feendish thinks of another smart scheme how to rob people’s homes at Christmas: his Carol singers make such a horrid row that Grimly easily sells his soundproof ear-muffs to the annoyed citizens. Now he is free to break into their house as they sleep because they can’t hear anything. On his way out Grimly runs into Father Christmas, accidentally knocks him down and comes up with an idea to rob every house in town disguised as Santa. The tale becomes completely surreal towards the end when it turns out that a lot of the story was in fact Grimly’s dream… or was it not??? Artwork by Paul Ailey. 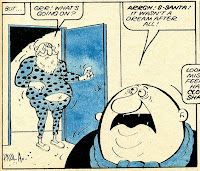 The second set of Grimly Feendish looks like a reprint. In it the crook takes up collecting stamps and has a go at the famous penny green… 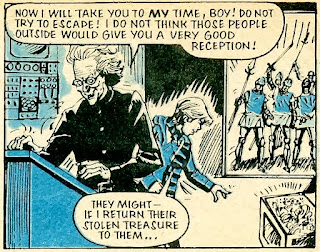 In the episode of Toby’s Timepiece, Toby trips on his long Doctor Who scarf and finds himself centuries back in time where he gets to meet a greedy time-thief – a villainous scientist from the future who has built a time machine to travel back in time and steal treasures from medieval knights. The knights take Toby for the time-thief’s accomplice but the boy returns them their treasure. Furious, the scientist transports Toby with him to his own time in the future where Toby is taken into custody by the scientist’s robots. In a strange and unconvincing twist of the plot Toby persuades the robots that the Professor has to be arrested for possession of unauthorized valuables that are the spoils of his many raids into the past… 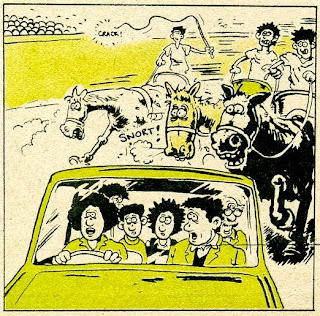 The last new strip I would like to cover is the second installment of Moving House by Steve Bell (the first appeared in the 1980 Shiver and Shake Annual). This time the Hardy family start all over again, as if the first episode had never happened – they are still unaware that the old grandfather clock in the attic is in fact a time machine and turning its hands means time-travel, house and all… The family are on their way to the circus, what they don’t realize is that the time machine has transported them to ancient Rome so they find themselves in Circus Maximus where they have a narrow escape from being run over in a horse chariot race. They escape from Circus Maximus to the relative safety of their house but the restless Grandpa turns the hands of the clock once again and the house lands in the Middle Ages where Grandpa is seized by a mean baron. Luckily for him, the same baron later challenges one of the Hardy boys to a joust, and is defeated. The Hardys return back home and reckon that the clock must be some sort of time machine. In the end, they get back to the 20th century just in time for the circus performance…

There are quite a few reprints in the Annual. I’ll mention two: Robby Hood is a reprint of the third story of Robby Hood and His One Man Band that ran in COR!! from 13th February until 27th March, 1971 (issue Nos. 37 – 43). You can read my account of the story HERE. 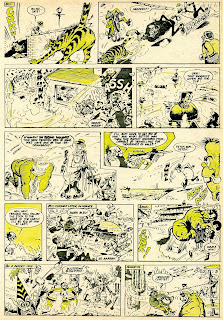 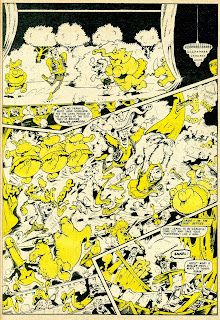 Overall, this is quite an unimpressive package to my eye.
Posted by Irmantas at 7:02 AM 3 comments: 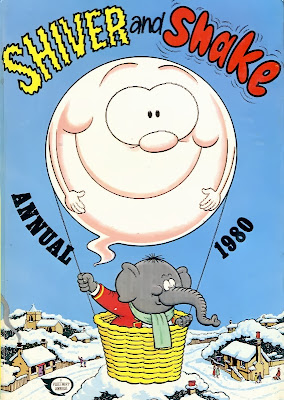 Two 'new' old strips were added to the lineup of reprints:  Chumpions was from COR!! (you can read a review in my COR!! series HERE) and Ding Dong Spells – Whacky Witch v. Fairy Godmother from WHIZZER AND CHIPS of the mid-70s. 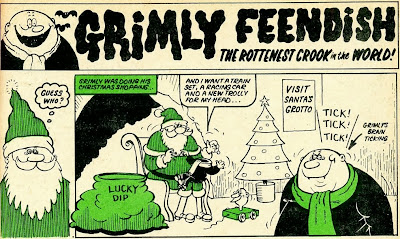 Paul Ailey contributed a nice Grimly Feendish story in which the rottenest crook in the World devised and implemented a clever and elaborate scheme for pinching customers from the town’s big stores that had a Santa’s grotto at Xmas. First, he made a store owner an offer he couldn’t refuse and took over his business in exchange for an “I.O.U.” note for 10 pounds. 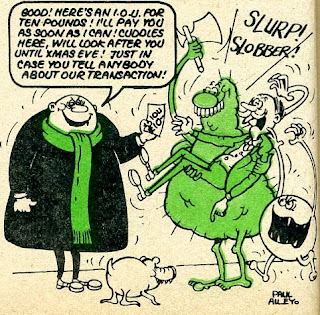 Then he had the Mad Professor build him four radio-controlled robot Santas and put them into work in competitors’ stores so that they would upset all the customers and drive them away, and they would all come to Grimly’s store. Quite a plot, isn’t it? All goes to plan until the robot Santas return to Grimly’s store and irritate a few costumers there. Grimly wants to escape with the cash but the sledge is too heavy for the deer to pull because the four Santas are also there. Grimly gets rid of the excess weight by discarding three of the four robots but the fourth Santa gets upset at the way Grimly has treated his friends so he throws the crook out of the sledge and Grimly lands straight in a cop shop where cops are celebrating Christmas. 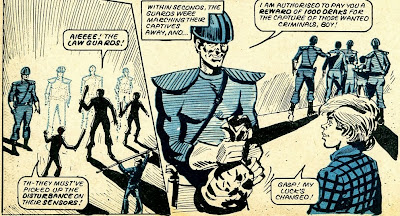 There are not one but two stories of Toby’s Timepiece in this Annual. In the first tale (a really messy one, if you ask me) the magic watch transports Toby 50 thousand years into the future where he helps the law catch some wanted criminals, gets rewarded with gold money of the future and makes a narrow escape back to his own time when the law guards realise that Toby himself is wanted for attacking the “law master” (a kind of computer super-judge). In the second story the timepiece takes Toby back to the days of the Wild West where the boy helps the sheriff arrest a gang of bank robbers led by Sheriff’s deputy. In the earlier stories Toby appeared to have learnt to operate the timepiece but in this annual we are told that “Toby never knew when the timepiece was going to work … so he kept it with him all the time, just in case”. If I was in his shoes and had experienced all those weird and dangerous adventures depicted in the earlier annuals and holiday specials, I’d have probably thought twice before carrying it around…

In the two episodes of Frankie Stein Prof. Cube tries to get rid of Frankie by using two new inventions – anti-gravity paint in the first story and vanishing cream in the second. Too bad the vanishing cream also has the effect of making things grow to enormous size which means destruction to Mildew Manor.

The tale of The Forest Legion is illustrated by a new artist, so Mazza’s signature in the last panel of the episode in the previous Annual must have signified his bye-byes. This time the legionnaires foil a kidnap plot, although the Major who is kidnapped was mean to them when they first met him.

In the two stories of Ghoul Getters Ltd Dad and Arnold have to deal with a ghostly court jester and a ghostly damsel in distress. Both spooks are put to a good use in the end: 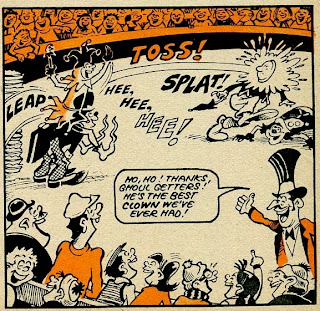 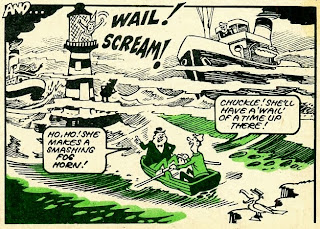 Enough about those familiar characters, let’s take a look at the new features. Clever Cloggs is quite an innovative blend of a comic strip and different puzzles, here is one of the two instalments by Les Barton that were included in this 1980 SHIVER AND SHAKE Annual: 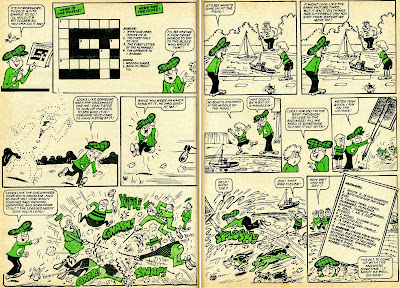 Doc Hoot starts without much introduction but it looks as if the Doc is yet another adventure-seeking random time-hopper, who travels with the aid of his weird pogo-stick contraption. In this story Doc Hoot helps poor King Richard regain his self-confidence by presenting him with a recording of a lion’s roar. That’s how the king becomes known as the Lionheart… Art by Alan Rogers.

Tommy’s Magical Telescope is about a boy who owns a magic telescope. If Tommy looks at things through one end they get smaller, and if he looks at them through the opposite end, they get bigger.  In this episode Tommy uses the telescope on a practical joker to teach him a thing or two. The set is illustrated by Cliff Brown whose style appears to have changed a great deal since the days of Timothy Tester in WHIZZER AND CHIPS…

Moving House tells the story of the Hardy family (Mom, Dad, Grandpa and three kids – Denise, Sidney and Billy) who have moved into an old house. Denise and Sidney discover a grand-father clock in the attic and fiddle with in without realising that it’s a time-machine. They soon find out that it is, when they are attacked by a mammoth, but the kids are an adventurous type so they continue playing with the dials. The time machine operates in such a way that it transports the entire house, hence the title ‘Moving House’.  The second journey takes the Hardies to the past where the press gang take Dad and Billy for recruits for the Navy. The story has a happy ending but instead of returning to their own time, the Hardies find themselves in the days of industrial revolution. A couple of local kids take Denise and Sidney down to a coalmine where the overseer makes them work hard pushing carts. Next day they are very happy to be back in the twentieth century and come top in history… Nice artwork by Steve Bell...

For dessert, here is a complete episode of Sweeny Toddler by Tom Williams: 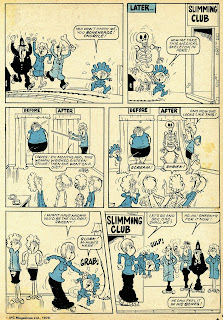 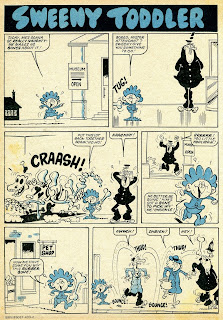