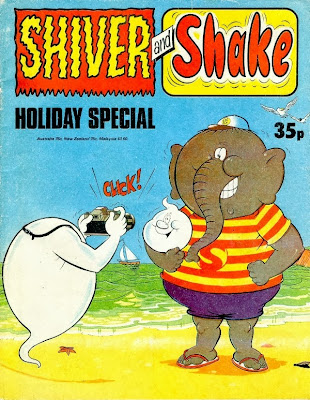 CONTENTS: Shake (2 episodes by Terry Bave), Horrornation Street (a 3-pager by Tom Williams), Holiday Haunts (gags by Jack Clayton), Creepy Car (by Jim Crocker), Grimly Feendish (a 3-pager by Paul Ailey, signed), The Shake Squad by Leo Baxendale (3 reprints of The Lion Lot from LION comic), Pest of the West (5 reprints from WHAM!), Freddie Fang the Werewolf Cub (4 reprints from COR!! by Reg Parlett), The Desert Fox (a 2-pager in full colour by Terry Bave), Puzzle-Time (by Tony Goffe), The Duke’s Spook, Sports School (by Jim Watson), Lolly Pop (a 3-pager), Bad Penny (2 reprints from SMASH! by Leo Baxendale), Webster, The Ghost Train Game in full colour on the centrespread, Moana Lisa (a new episode by Barrie Applieby), The Haunts of Headless Harry (by Mike Lacey), Frankie Stein (a 3-pager by the artist whose name I don’t know), The Fixer (new episode by Barrie Appleby), Sweeny Toddler (two pages in full colour by Paul Ailey), Tough Nutt and Softy Centre (a 3-pager by Norman Mansbridge), Shivery Puzzles to Shake-Up Those Brains (2 pages of puzzles by Les Barton), Mirth Shakers (two pages of gags by Tony Goffe), Ghouldilocks (2-pager by Barrie Appleby), Shiver (on the back page in full colour by Terry Bave).

Two more reprints were added to the package this time, both from old Power Comics: Pest of the West was from WHAM! and Bad Penny from SMASH! 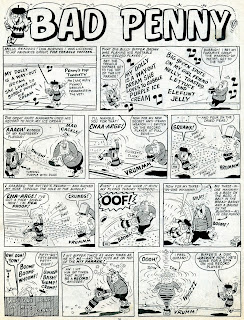 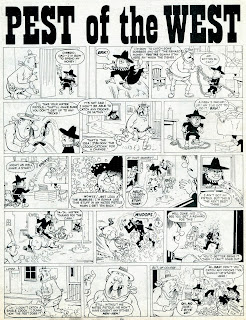 Mike Lacey contributed a nice episode of The Haunts of Headless Harry – a strip that had enjoyed a brief run in the revamped SMASH! in the early seventies so I am not sure if it was a reprint or new material: 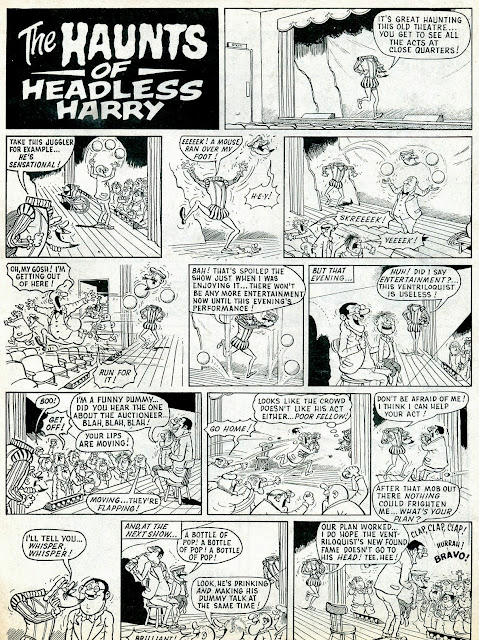 Speaking of new strips, Barrie Appleby was once again in charge of Moana Lisa, Ghouldilocks and The Fixer. The three-page episode of Frankie Stein was by the same unknown artist who illustrated it in the 1977 Holiday Special. In this edition Professor Cube takes Frankie to the seaside hoping that something dreadful will happen to him there. And happen it does but it’s not Frankie who’s the victim:

Grimly Feendish gets an idea to dress as a dangerous man-eating shark and scare everybody off the beach so that his gang can pinch all the rich pickings left behind by the panicked holiday makers. The plan works well but look what happens as the gang try to make their escape by sea: 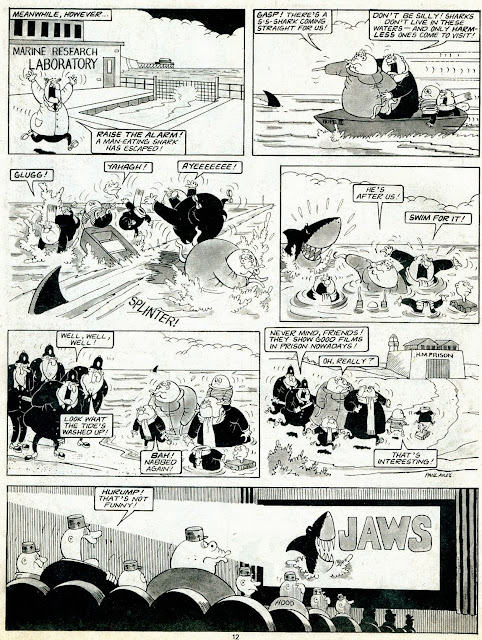 The Grimly Feendish set wasn’t Paul Ailey’s only contribution to the 1978 SH&SH Holiday Special. He also illustrated this episode of Sweeny Toddler: 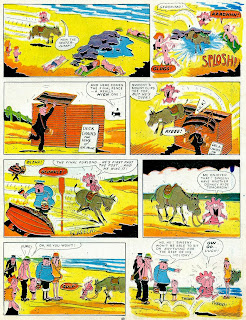 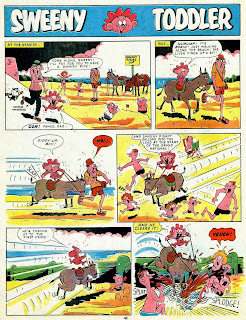 Generally speaking, there is nothing very interesting to note about this edition. It was an unremarkable package with seaside holidays as the dominant theme. One thing that caught my eye is the large number of page-wide last panels that different artists drew in their various strips: 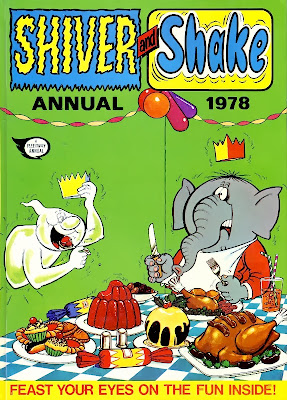 Contents: Sweeny Toddler (four episodes by Tom Paterson, 3 signed); Ghoul Getters Ltd (two  episodes by Trevor Metcalfe and one by someone else), The Desert Fox (one episode by Terry Bave and one by someone else), Shiver (2 episodes by Terry Bave), Shake (5 episodes by Terry Bave), Scrapper’s Scrapbook (5 reprints of a strip by Leo Baxendale but I don’t know where from), The Hand (two episodes, one by Les Barton and one by someone else), Frankie Stein (three sets - one by Frank McDiarmid and two by someone else, possibly Alf Saporito), Blunder Puss (2 episodes by Jim Crocker), Webster (two episodes – one by Les Barton and one by someone else but not Terry Bave), The Duke’s Spook (2 episodes), The Shake Squad (4 reprints of The Lion Lot by Leo Baxendale from LION comic), Toby’s Timepiece (8-pager, adventure), Sports School (2 episodes by Jim Watson, signed), Horrornation Street (two 3-pagers by Tom Williams), The Ghost’s Revenge (two episodes, most probably by Crocker), Tough Nutt and Softy Centre (two 3-page sets by Norman Mansbridge), Robby Hood and His One Man Band (reprint from COR!! weeklies); Webster, Lolly Pop (three sets, two signed by Les Barton and one drawn by someone else, possibly Arthur Martin), Grimly Feendish (a 4-pager by Paul Ailey); Creepy Car (most probably by Reg Parlet), Scream Inn (reprint of the episode from SHIVER & SHAKE No. 4), ‘Orrible Hole (a strip from WHOOPEE! that hasn’t been seen in Shiver and Shake before), The Forest Legion (8 pages), Space Jinx spot-the-difference puzzle; Mirth Shakers (gags, 2 pages by Tony Goffe), Revolt of the Robomen (space adventure by Ron Turner, 6-pages).

This was the first SHIVER AND SHAKE Annual that stopped pretending it was a two-comics-in-one package, and the first without blocks of full-colour pages. That said, the Annual was an “all-colour book” in the tradition of IPC comics of the seventies when all pages were printed in b/w with added red, yellow, orange, green or blue.

Both mascots were on the cover but inside SHAKE outdid SHIVER by good margin: there were as many as five Shake sets as opposed to merely two of Shiver.

Now let us take a look as some of the familiar strips.

Ghoul Getters Ltd rid a quaint English Inn of a spooky highwayman who always scared the tourists away; then they dealt with an interfering spooky fireman and hired him out to a car wash; in the third story they handled a phantom painter who painted in all the wrong places until Ghoul Getters found him the right job painting traffic lane line markings.

There were three new sets of Frankie Stein. In the first one Professor Cube tried to get rid of Frankie with the aid of a radio-controlled robot fly but it accidentally disturbed a bee-hive and the bees turned against the poor Professor. In the second episode Prof. Cube came up with an idea to build a monster wooden puppet and bring it to life with the potion he brought Frankie to life with, hoping that the puppet will then help him get rid of the ‘useless twerp’. Frankie derailed the plan by spilling the potion and bringing furniture and floor boards to life instead. In the third story Prof. Cube pretended to be Santa and sent Frankie off on a rocket-powered armchair by persuading him it was a sledge driven by Rudolph. Frankie ended up in the town shop and picked lots of presents while Prof Cube had to pick the bills for the toys and damages… The first set was by Frank McDiarmid but I don’t know who did the other two, Alf Saporito, perhaps?

Those of you who read the previous two SHIVER AND SHAKE blogposts will remember that I didn’t think much of the adventure tale Toby’s Timepiece. Well, I have to say that the 8-pager in this annual is definitely an improvement because it tells quite an agreeable story. Toby’s magical pocket watch transports him to a distant future in which his house as well as the whole neighbourhood has been enclosed under a dome and become part of the Museum of Ancient Culture. This time Toby helps law-enforcement (securobots) and a vigilant local boy Kyton to catch two crooks who stole some antiques (a kettle and a mixer) from Toby’s house. Toby himself is under suspicion at first but he soon demonstrates his good intentions. By now Toby appears to have learnt to operate the timepiece – he knows he’s got to wind it to put it into action. The only weak point in this particular instalment is that Toby does this without a reason, as if in an urge to get his fix of random time-travelling without a particular aim or purpose. This is how the story began: 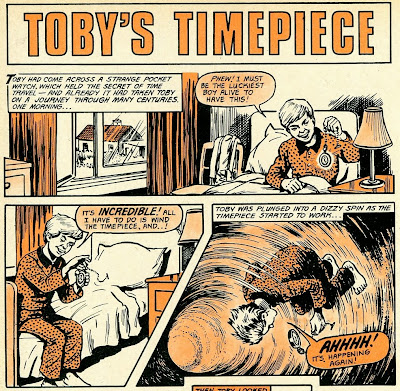 The 4 pager about the rottenest crook in the World is in fact two stories connected by the same instrument of crime - a giant bubble that Grimly Feendish blows with the chewing gum he pinched from a bubble gum machine; in the first story Grimly uses the bubble gum bubble in yet another failed attempt to steal money from the bank, and in the second story he uses the bubble to let himself into Lord Moneybag’s party but ends up behind bars, together with all of his aides. Artwork is again by Paul Ailey, I believe: 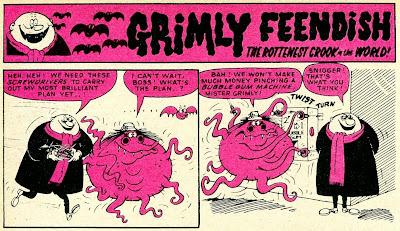 In the episode of the Forest Legion Boss and Basher are looking for a hidden treasure with a map they stole from the local museum. They come well-prepared but stand no chance against the Forest Legion who outsmart them and pass the treasure to the local forest tramp Smokey Joe so that he can claim a reward for finding it. I would very much like to find out the artist’s name: 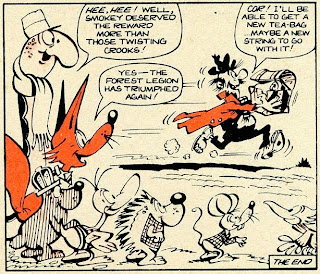 The Annual had an unusually large proportion of adventure stories. In addition to 8 pages of the Toby’s Timepiece tale mentioned above, it also contained two adventure stories illustrated by Ron Turner:  16 pages of Robby Hood and His One Man Band (originally from COR!! Nos. 29 – 36; you can read my review of the story in an old blogpost from my COR!! series HERE) and 6 pages of Revolt of the Robomen – most likely new work drawn especially for the Annual (although I remember seeing many such space adventure tales by Ron Turner in the early years of WHIZZER AND CHIPS). Here is the opening page with a splash panel: 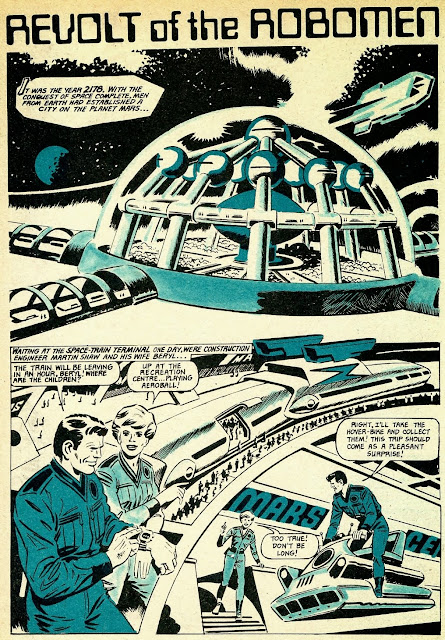 Leo Baxendale was represented with 4 pages of The Shake Squad that were reprints of The Lion Lot from LION comic. Each instalment had a headline: The Shake Squad… Really Dig Doing the Garden, …Having a Fair Old Time, …Running Their Indoor Sports, …Driving a Dad with their Zoo. Did the original episodes in LION have these? 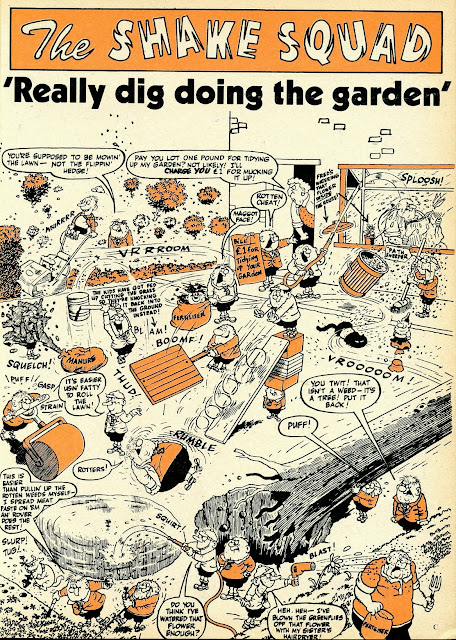 The Annual also has 5 episodes of Scrapper’s Scrapbook that are also reprints of Leo’s illustrations but I don’t know where from, although I am positive I’ve seen them somewhere… Can anyone help please? 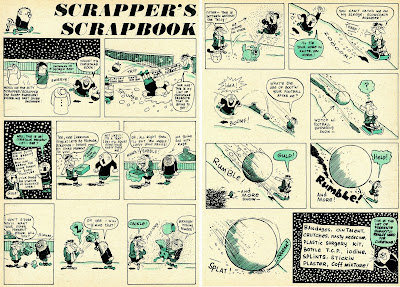 Finally, here is Space Jinx – a spot the difference puzzle that looks like a reprint too but I don’t know where from or who the illustrator was: 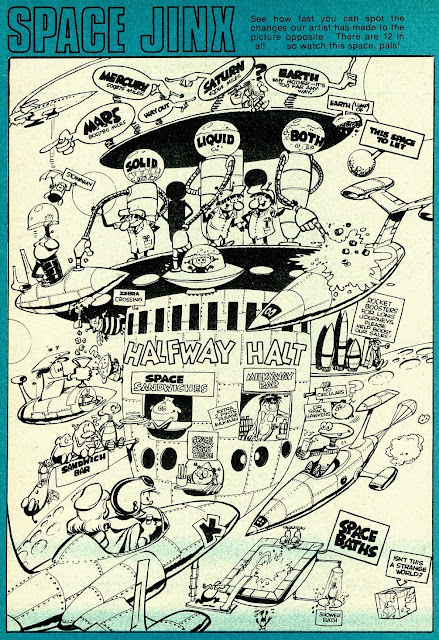 For dessert, here is one of the four episodes of Sweeny Toddler by Tom Paterson (all were two-pagers): 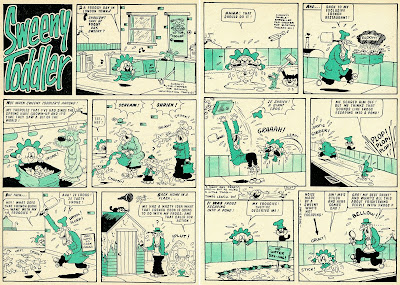