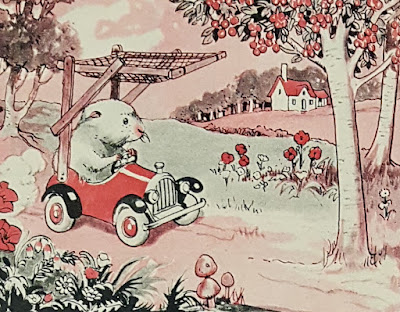 Here is part three of the article by John Wigmans, a guest-writer on this blog, where he covers the genesis of Gulliver Guinea Pig. Check out the previous posts if you missed the first and second part.

The First Steps of an Unlikely but Very Likeable Hero: Gulliver Guinea-Pig (Part 3)
by John Wigmans

In February, 2018 I wrote this about what I then considered to be the first steps of our brave little hero, Gulliver Guinea-Pig: "As it turns out, Gulliver didn’t start his travels in Playhour dated 24 May 1958 (No. 189). As far as I now know, his real debut was in Tiny Tots dated 17 May 1958 (No. 1298), as part of The New Nursery Rhymes." Luckily I kept my options open as I continued the post: "Unless other information surfaces, Gulliver made his first steps in [...] Tiny Tots dated 17 May 1958, No. 1298." Well, other and more exact information did surface. High time to share these hitherto unknown details.

In September, 2018 I did some additional research in the bound volumes of Tiny Tots which are held by the British Library in London. In this often neglected comic I found, to my surprise, four delightful stories starring Gulliver, three of which I had not seen before (well, two actually: see the list below). All were published as centre-spreads in 'The New Nursery Rhymes’ series, three in May and the last one in July, 1958. The instalment I had assumed was the first-ever appearance of Gulliver (#1298), was in fact the second. By the way: buying the comic with this episode on eBay in November, 2017 led me to write about the first steps of our unlikely but very likeable hero.

To cut a long story short, here is a list of the numbers, titles of the stories and cover dates of the four issues of Tiny Tots featuring Gulliver Guinea-Pig: 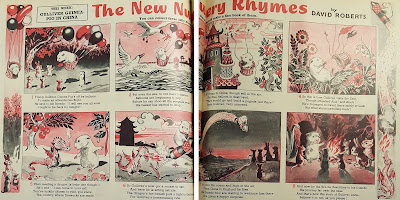 A revision of my earlier statement is now in order: As it turns out, Gulliver didn’t start his travels in Playhour dated 24 May 1958 (No. 189). His real debut was in Tiny Tots dated 3 May 1958 (No. 1296), as part of ‘The New Nursery Rhymes’. This official debut predates his adventures in Playhour by three weeks. But it still remains a mystery to me why Gulliver started his life in Tiny Tots. Was the fate of this comic already sealed in May, 1958? And were the travels of the guinea-pig used to entice young readers (and their parents) to switch over to Playhour, some eight months before the actual demise of Tiny Tots? Perhaps one of the readers of this blog can shed some light on this matter.

Now Irmantas can hopefully start working on a string of blogposts covering the entire run of the strip in Playhour, as he recently let me know. I can only hope he'll start this string with the adventures of our ‘roving world-traveller’ as published in Tiny Tots 1958 and the Tiny Tots Annual for 1959.

Click on the POWER PACK banner in the right-hand column and get your copy of the POWER PACK OF KEN REID - the deluxe two-volume set of Ken’s strips in WHAM!, SMASH! and POW! comics of the ‘60s.
Posted by Irmantas at 1:14 PM 4 comments: