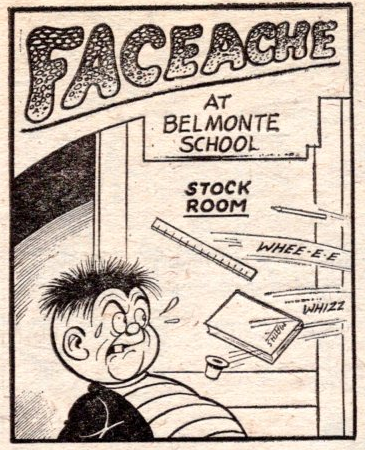 The next serialised Faceache story by Ken Reid appeared in two consecutive issues of BUSTER cover-dated May 19th and 26th, 1979, and it went like this: 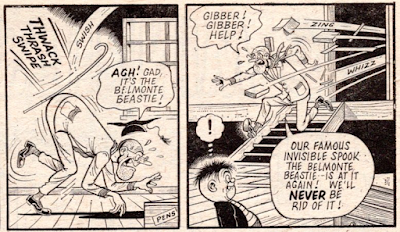 Mr. Snipe is terrified of the Belmonte Beastie, the famous invisible spook, which haunts the school’s stock room, and Faceache volunteers to get rid of it.

The spook is impressed with Faceache’s ability to scrunge. Flattered, Faceache nevertheless tells him to scat so that the lad can claim his month off homework. The ghost vanishes and Faceache reports to Mr. Snipe that the little horror has departed from the school forever. But somewhere in the limbo the Belmonte Beastie meets his fellow-spooks, and invites them back to Belmonte school to see a genius kid who could teach them all a few tricks… 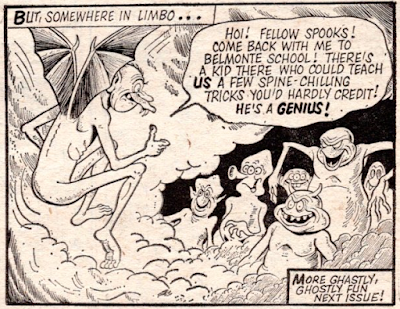 The Belmonte Beastie returns to school with some of his pals: 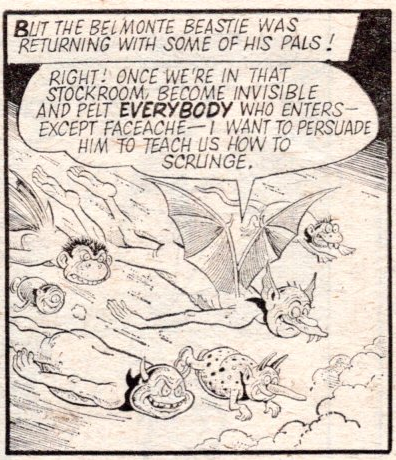 Thinking that it’s now safe, Mr. Snipe enters the stock room and is pelted by invisible ghosts. Upon hearing the racket, Faceache rushes to the stock room, thinking that the spook has returned and he’ll have to scrunge again to scare it off. Mr. Snipe takes the scrunged Faceache for the spook that has become visible, and assaults him with a stick, threatening exorcism: 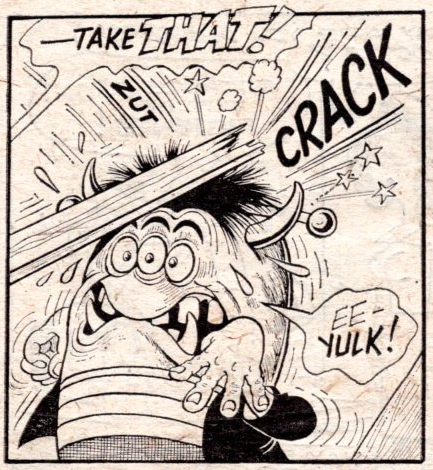 Seeing what scrunging may lead to, the ghosts leave the school stock room for good, not wanting any part of it...

Click on the POWER PACK banner in the right-hand column and get your copy of the POWER PACK OF KEN REID - the deluxe two-volume set of Ken’s strips in WHAM!, SMASH! and POW! comics of the ‘60s.
Posted by Irmantas at 9:25 AM 1 comment: