SERIALISED FACEACHE STORIES – PART ONE: FACEACHE FINDS HIMSELF AT BELMONTE


Broadly speaking, the whole Faceache saga consisted of two long periods – the first 292 episodes showed Faceache in his home environment in and around the village of Puddleditch, with Faceache’s Dad (first seen in episode 13 (24 July 1971)) as the second main character. The second period (episodes 293 – 695) depicted Faceache’s antics at Belmonte School for Uncontrollable Young Whelps where the lad was looked after by Mr. Albert Thrashbottom (Headmaster) and Mr. Snipe (Teacher).

All serialised stories that are the topic of this series fall within the second period, and the first one tells readers about how and why Dad committed Faceache to the special education establishment. The two-part story can be found in BUSTER AND MONSTER FUN dated 14 January 1978 and 21 January 1978. Faceache has a diabolical dream about a headmaster welcoming him at his ghastly establishment. Next morning he’s woken up by Dad who has won £ 75,000 in the pools. 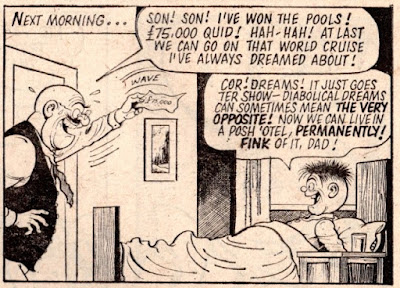 At last they can go on that World cruise Dad has always dreamed about! Faceache is delighted because now they can live permanently in a posh hotel. Dad realises that because of Faceache’s scrunging hobby they’ll get kicked out of hotels all over the Globe, and announces that Faceache’s future home will be Belmonte... 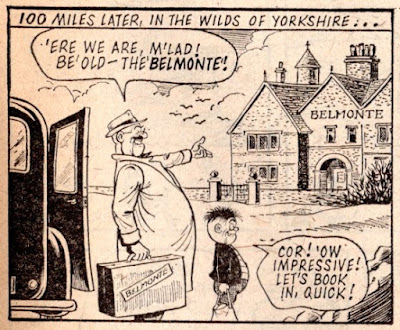 Faceache thinks it is the name of a posh hotel. In fact, it is Belmonte School for Uncontrollable Young Whelps. Dad is off, leaving Faceache in the iron hands of Mr. Albert Thrashbottom. 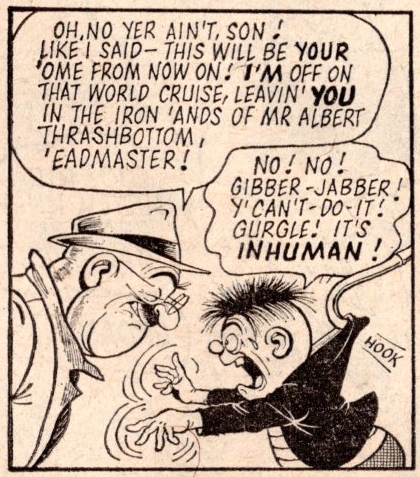 In the second part of this story Faceache scrunges into a Fangy-Faced Floogoe-Bug and tries to follow his Dad driving off in a taxi, but suffers an accident involving an airplane... 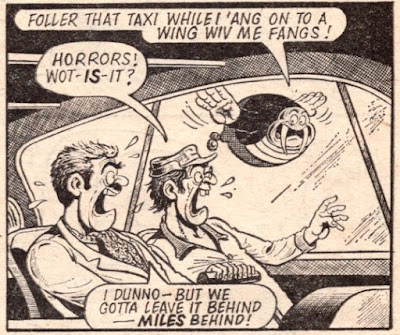 Mr. Snipe canes him for breaking the school motto – “Cleanliness and Truth” 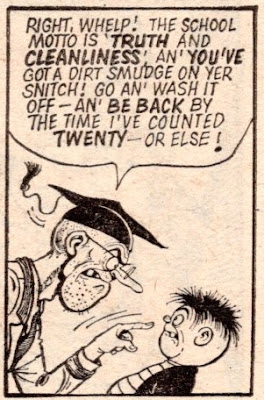 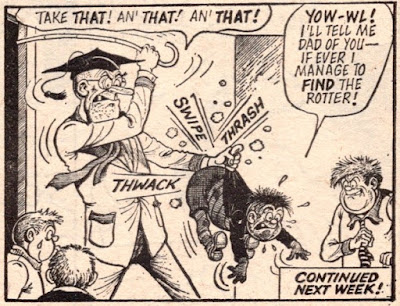 Click on the POWER PACK banner in the right-hand column and get your copy of the POWER PACK OF KEN REID - the deluxe two-volume set of Ken’s strips in WHAM!, SMASH! and POW! comics of the ‘60s.
Posted by Irmantas at 4:57 PM No comments: 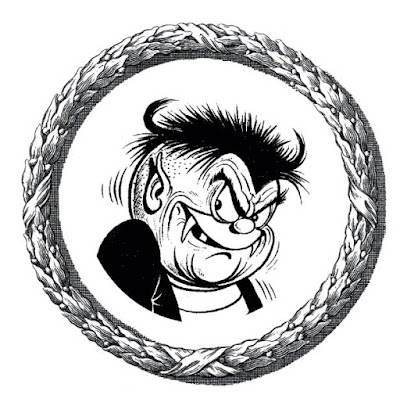 Faceache was Ken Reid’s longest running strip that began in the first issue of JET cover-dated 1 May 1971, and ended nearly 17 years later in BUSTER, cover-dated 14 March 1987. After Ken’s death the strip was continued by others, but I am talking about the run illustrated by the original artist only.

In the period between 1971 and 1987 Ken Reid drew as many as 695 pages of Faceache’s adventures in the weekly comics. The majority were self-contained stories, but some tales continued for two weeks or more, and I plan to start a long string of posts covering every single one of them, with synopsis of the plot, illustrated with a few panels from each. The stories were between 2 and as many as 6 weeks in length, and I have counted 34 of them, the first one starting in BUSTER AND MONSTER FUN of 14 Jan., 1978, and the last one (34th) ending in BUSTER AND JACKPOT of 26 June 1982. Come back soon for the first one!

… And while you are here, and provided you are a fan of Ken Reid, why not click on the POWER PACK banner in the right-hand column and get your copy of the POWER PACK OF KEN REID - the deluxe two-volume set of Ken’s strips in WHAM!, SMASH! and POW! comics of the ‘60s.

Posted by Irmantas at 2:23 PM No comments:


Below is another illustration that I would have wanted to include in the biography part of Vol Two of the POWER PACK OF KEN REID but wasn’t able to.

Odhams is said to have been a liberal publisher whose definition of things that were appropriate in a children’s comic was wider than that of other publishers at the time, but it turns out they also scrutinized Ken’s work and whited out the details they considered to be over the top – like the hanging scene in The Nervs. Check out the image shot from original artwork and compare it to the published version in Smash! No. 157 (1 February 1969). The artwork is from the collection of Peter Hansen, so thank you, Peter! :)

I couldn’t include it in the book because of poor image quality. 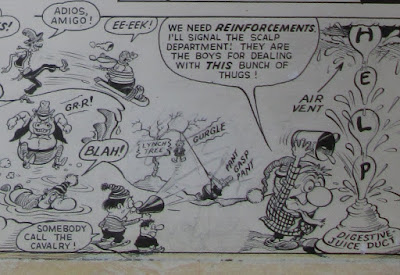 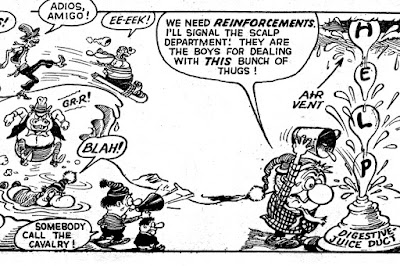 I will be closing the crowdfunding campaign for THE POWER PACK OF KEN REID on Sept 9, so if you want the deluxe limited slipcase edition, do not delay! Orders ship next day. A few copies are still available HERE.
Posted by Irmantas at 8:27 AM No comments: