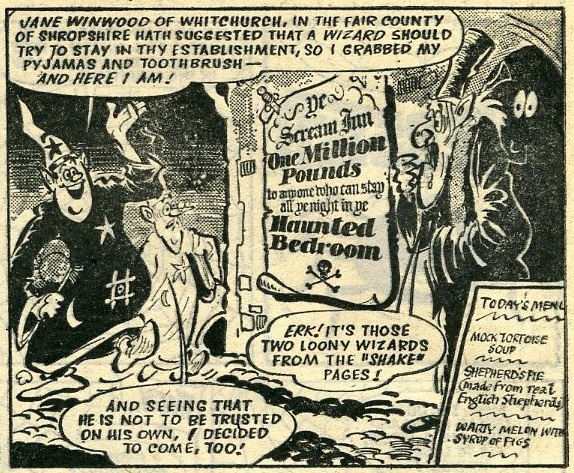 The very first time when characters from another strip showed up at Scream Inn was in Shiver and Shake issue No. 37 (17th November, 1973). That week the guests were Treacle and Brimstone from the excellent albeit short-lived Wizards Anonymous feature from the “Shake” section of the paper. I covered the strip in detail HERE, and even showed both pages of the episode, but I want this to be a complete series so I will show them again.

The first guest appearance was quite disastrous for Innkeeper and Co. because the potty sorcerers outsmarted the hosts and walked home with one million pounds. This, however, wasn’t the end for Innkeeper who made his own guest appearance in the pages of Wizards Anonymous in the very same issue, outfoxed Treacle and Brimstone and got his dough back. Here’s the complete story from Shiver and Shake issue No. 37 (17th November, 1973), drawn by Brian Walker, written (I suppose) by the usual writer, Brian Walker’s neighbour and mate Cliff Brown. Excellent stuff! 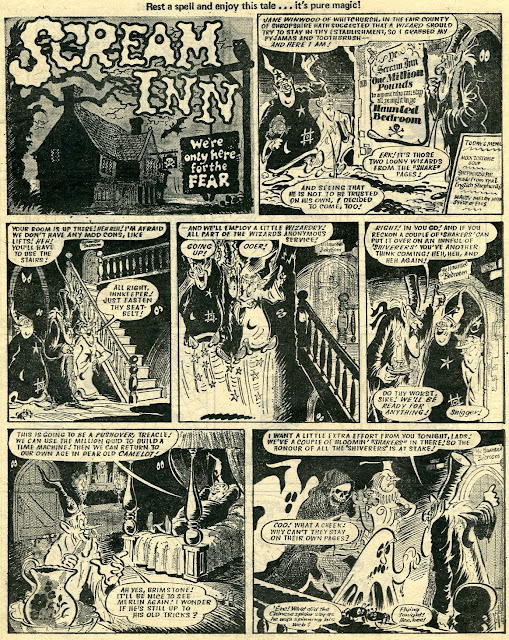 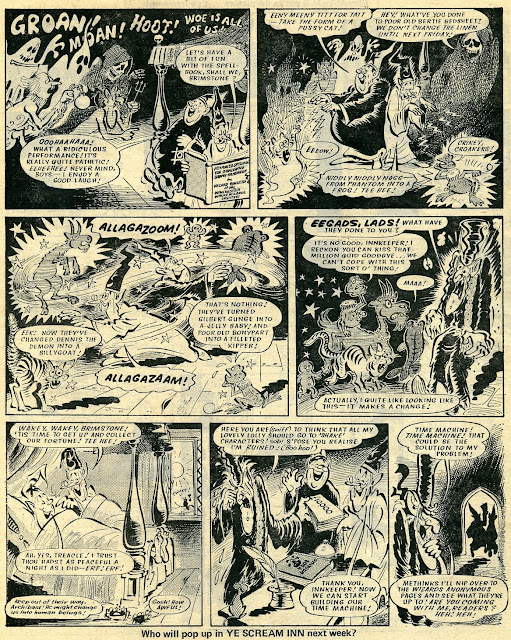 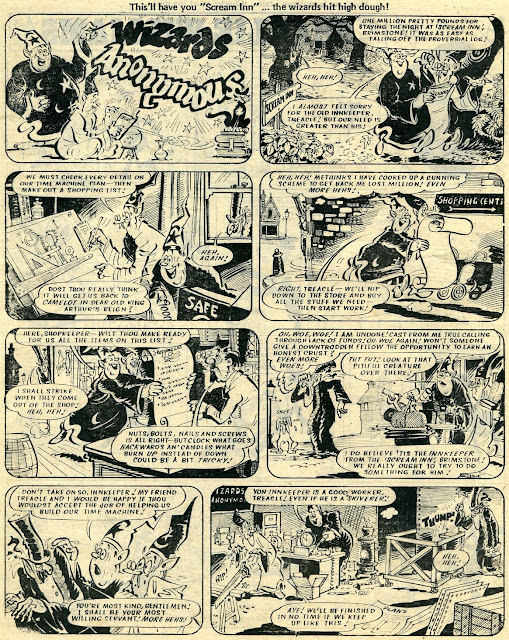 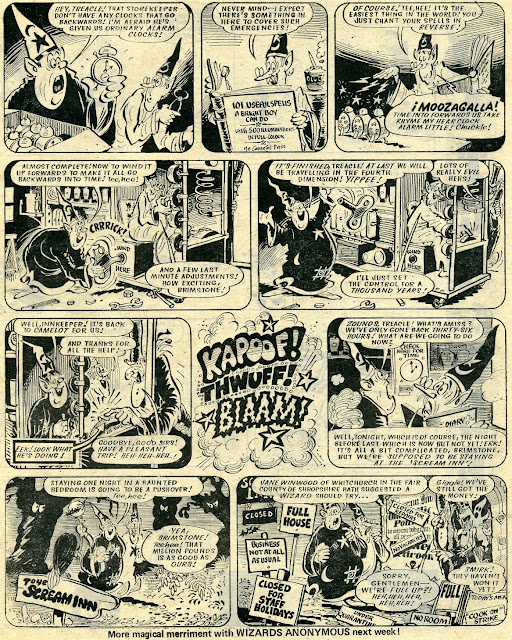 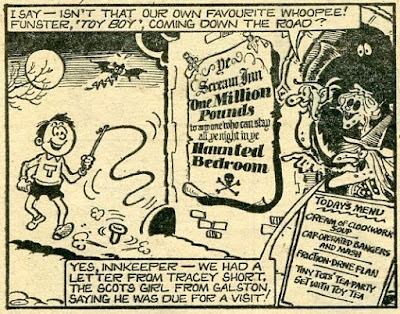 I like it when characters make guest appearances in other features. I may be mistaken, but Scream Inn may very well be the champion in this category, at least as far as IPC comics are concerned. The general setting of the strip with Innkeeper welcoming a fresh guest every week offered a perfect frame for including virtually anybody and anything into the story. 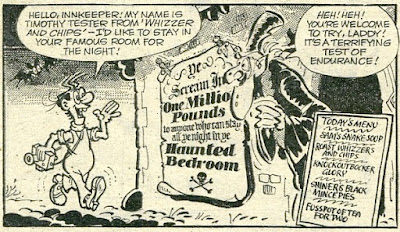 A quick look through my notes tells me there were at least 13 episodes with such guest appearances, so I thought it might be fun to do a series of blogposts and show them all! I will start it in a few days, but until then here’s a nice exchange of visits between two Whoopee! star characters – Scared-Stiff Sam and Frankie Stein from the issue of Whoopee! & Shiver and Shake cover-dated 5th April, 1975: 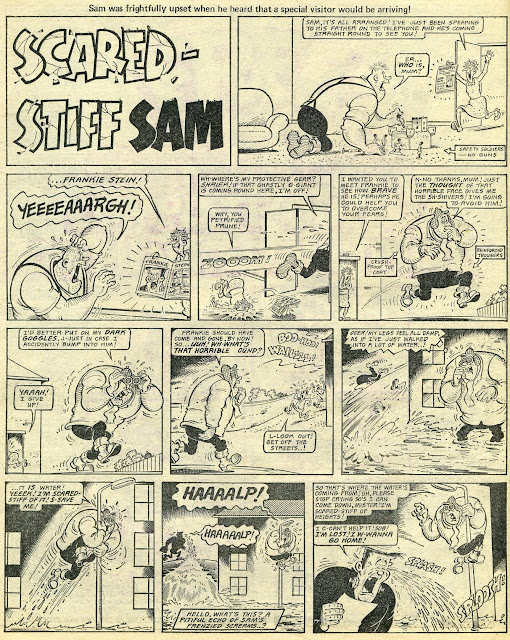 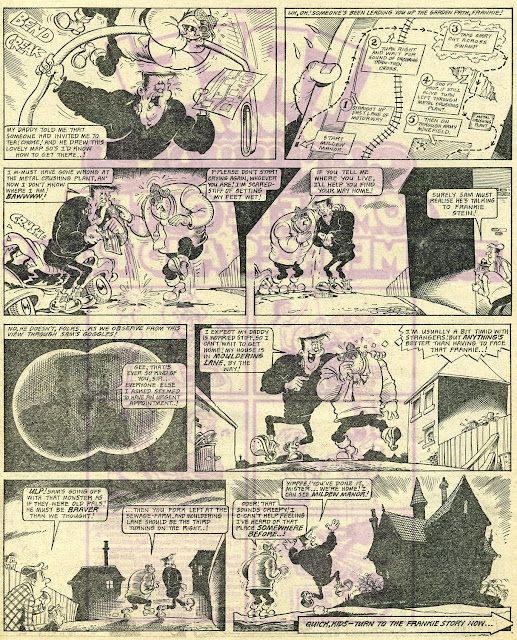 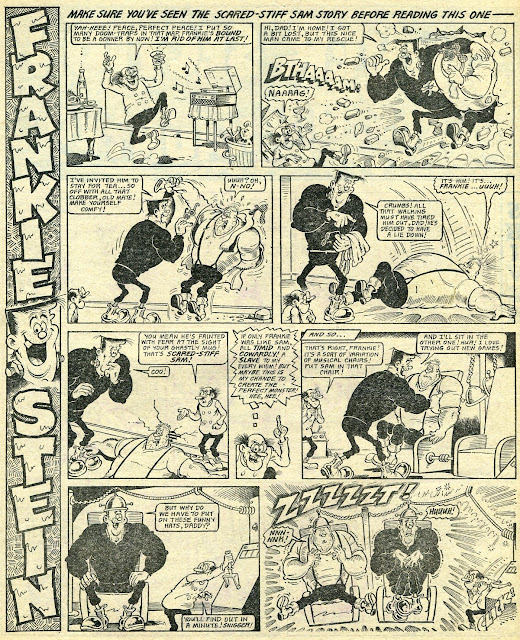 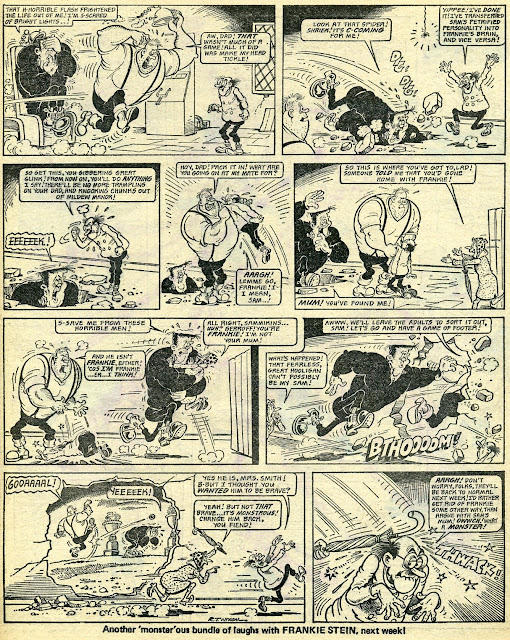 
While composing a recent post where I showed front pages of several landmark SPARKY numbers, I realized I’ve seen lots of beautiful covers of British comics but I’ve also come across a few that weren’t quite so excellent.

The examples that immediately came to mind were the covers of JACKPOT where attempts to draw realistic portraits resulted in these creepy caricatures of sinister-looking creatures: 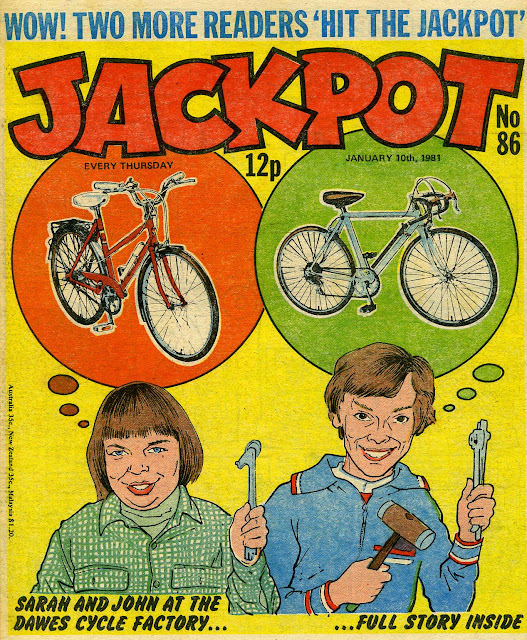 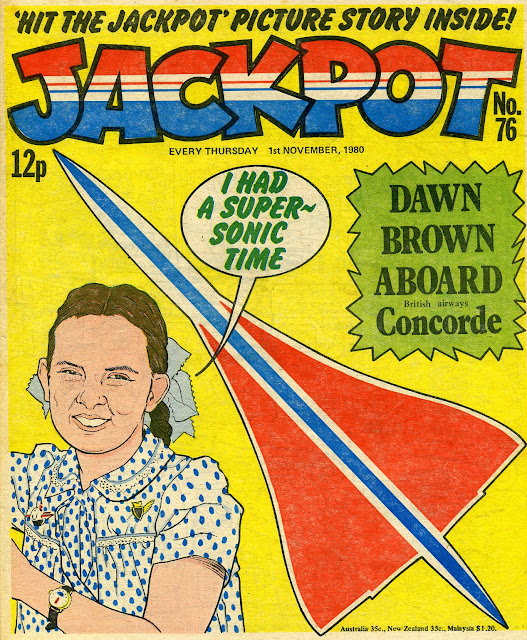 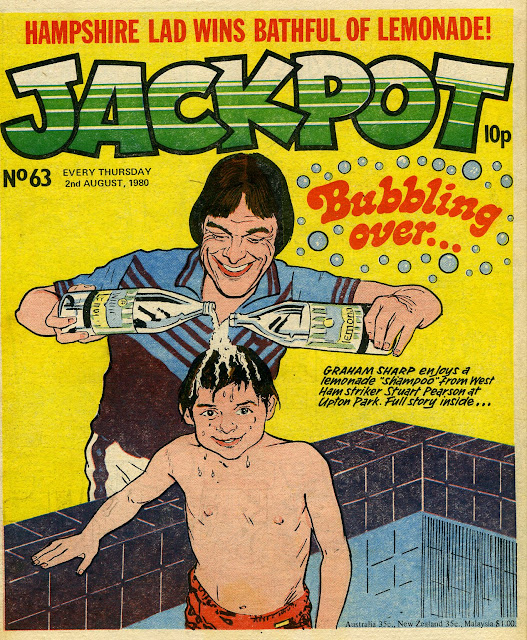 Tammy also had a few. Take a look at this one; there is something seriously not right with the poor girl on the right, don’t you think?.. 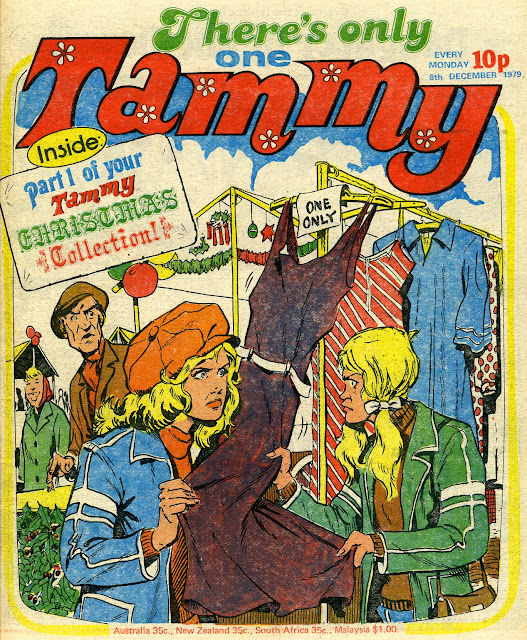 TAMMY had a series of covers drawn from readers’ ideas by one of the good artists but in this case the Editor was probably pressed for time and simply used the drawing sent by a reader: 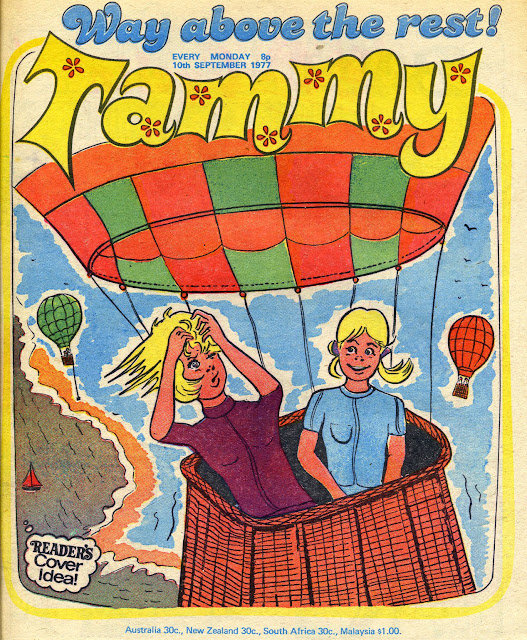 I am sure there are many more and I will expand the gallery when I come across some. Do you recall any covers that you thought weren’t quite up to the standard?


The very early installments of The Banana Bunch in The Beezer were full-pagers with a single picture. Drawn by the young Leo Baxendale, they were printed in colour on the back page of the comic for thirteen weeks starting from the very first issue (January 21, 1956). Starting from issue 14 (April 21, 1956) the feature was moved to the inside of the paper and appeared in black and red.

The reason I am writing this post is because some time ago I saw a copy of The Beezer from 1961 on eBay. One of the photos uploaded by the seller showed a reprint on one of those early full-page sets, rendered in back and red. I though my readers might be interested to see the two versions side by side. Here’s the original in full-colour from The Beezer No. 10 (March 24, 1956): 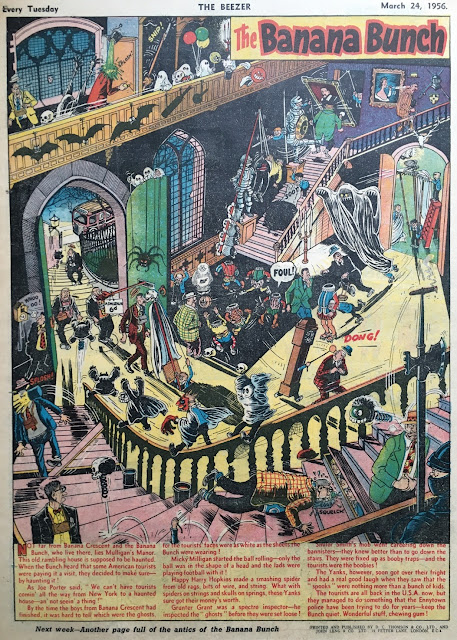 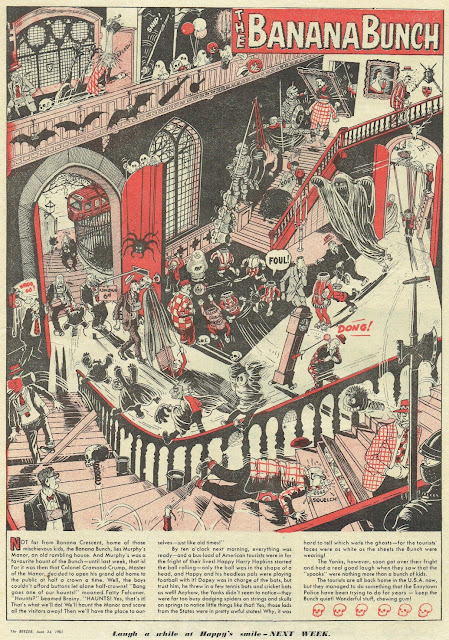 The colour version looks OK, but I have to say that in this particular case I prefer the reprint. What do you think? I wonder if DC Thomson reprinted other early installments of The Banana Bunch in the same way?
Posted by Irmantas at 5:40 PM 9 comments:

Email ThisBlogThis!Share to TwitterShare to FacebookShare to Pinterest
Labels: Leo Baxendale, The Banana Bunch, The Beezer

ALMOST THERE WITH MY SPARKY COLLECTION!


I’ll do some bragging today because recently I received a joblot of Sparky comics from 1966 and filled all of my gaps for the year. This means that my mission of collecting a full set of this interesting and scarce title is nearly complete. I am now only one number (No. 620 with the cover date of 4th December, 1976) away from being able to call myself a proud owner of one of the very few full sets that exist out there. I also need a complete copy of issue No. 110 (25th February, 1967) because mine has its centre pages missing.  Do let me know if you have spare copies of Nos. 620 and 110 to sell or swap!

The picture below shows the 4 boxes which hold my Sparky collection. All comics are bagged and boarded, two magazines per bag, one on each side of the board. 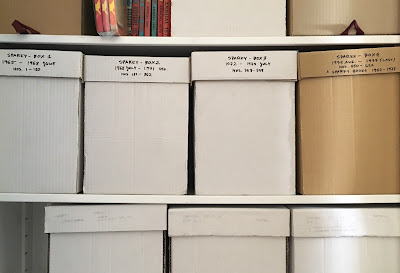 To celebrate the achievement, here’s a gallery of some landmark Sparky covers for you to enjoy: 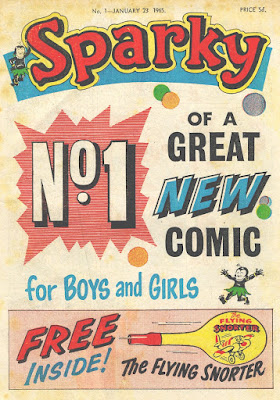 First cover with Sparky the character: 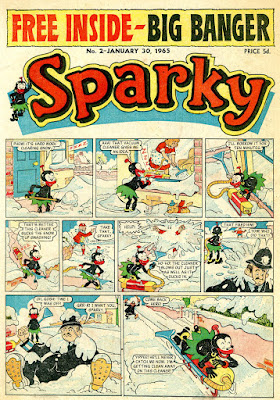 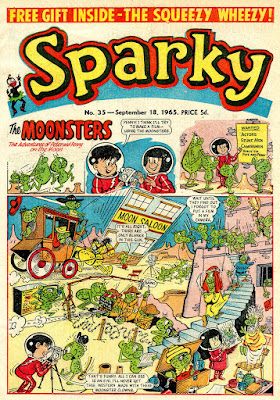 First issue with a new logo; Sparky the character returns to the front cover, ousting Moonsters to the back page: 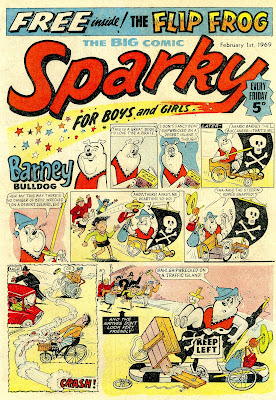 First issue with another new logo:

…and then another new logo:

…and finally the premiere of the last logo (a remarkably uninspired cover design, don't you think?..): 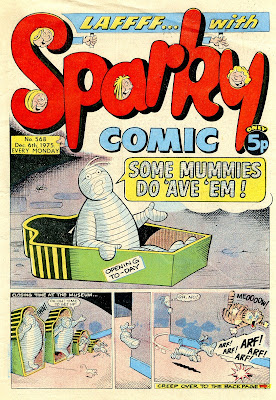 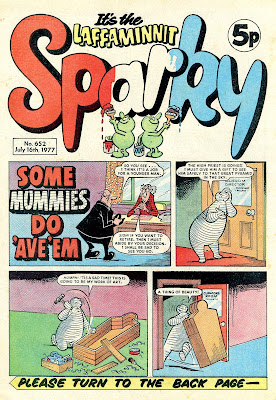