Who’d Kill Cockney Robin? was a suspense thriller that I found a real pain to read because I could hardly believe how embarrassingly poor and unconvincing the script was. It started off in a promising way with this 4-page introduction that took up the last two pages of SHIVER before SHAKE section and another two after: 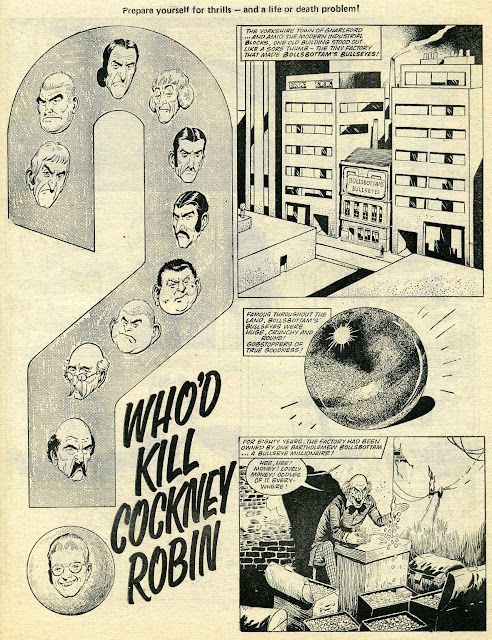 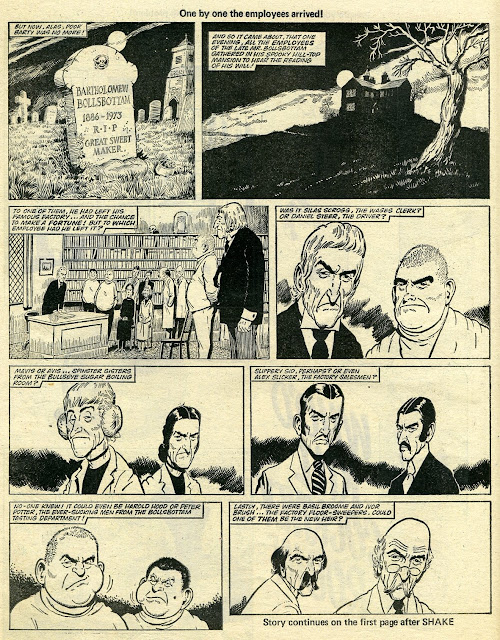 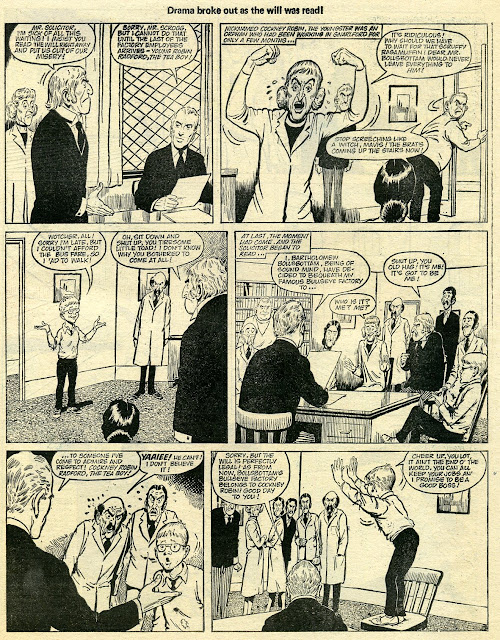 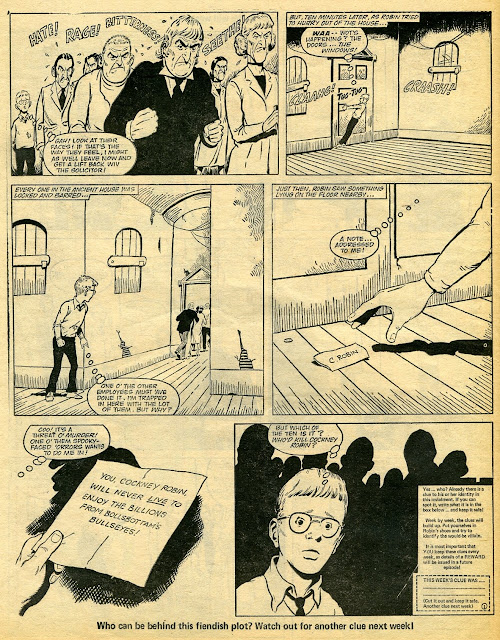 The plot is simple and effective: the mystery wannabe murderer unleashes a series of unsuccessful attempts on young Cockney Robin’s life in the enclosed and claustrophobic setting of the old mansion. In the end of each weekly instalment the clumsy villain drops a random personal item as he flees the scene of another failed murder attempt, leaving a clue to his identity. The growing number of clues eventually leads to the uncovering of the shady plotter by Cockney Robin.

The way in which the writer develops the story and characters, however, is lame and unconvincing, a clear case of overdoing things for dramatic effect. The sweets baron looks like a real skinflint, a very unlikely candidate to bequeath his multi-billion business to a tea boy whom he’s come “to admire and respect”. Then the crowd of grim and frustrated co-workers suddenly find themselves trapped inside an old mansion like a herd of submissive sheep in a barn. It looks as if they are resigned to spend the rest of their lives there, wandering pointlessly around like a pack of zombies and squabbling over trifles. Their efforts to contact the outside world for help are half-hearted and ineffective. So are the would-be murderer’s attempts on Robin’s life that are often so “sophisticated” that they border on absurdity: 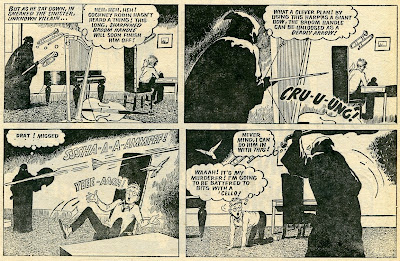 The story unfolds against a backdrop of continuous bullying and name-calling of the young Robin by begrudging adult co-workers who are unable to accept that the ex-tea-boy is their new boss: 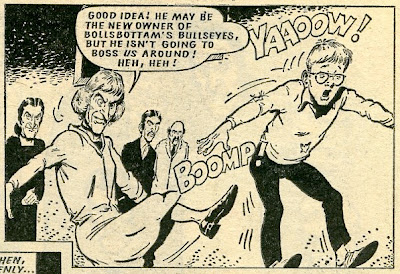 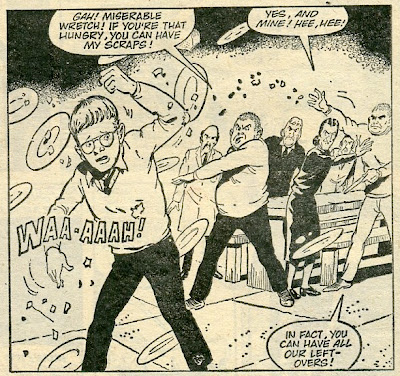 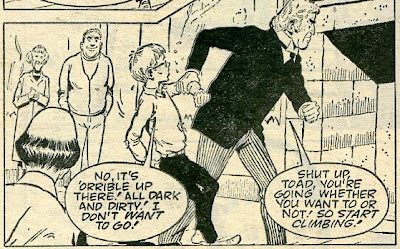 However, the herd of sheep that they are, they obediently line up and hold their palms up for examination at Robin’s command: 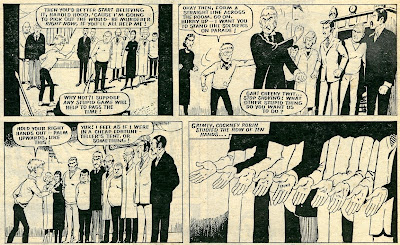 The final episode comes across as completely schizophrenic: impressed by Cockney Robin’s detective skills and appalled at Silas Scrogg's evil plots, the employees kneel down to pledge their eternal loyalty to the new boss… 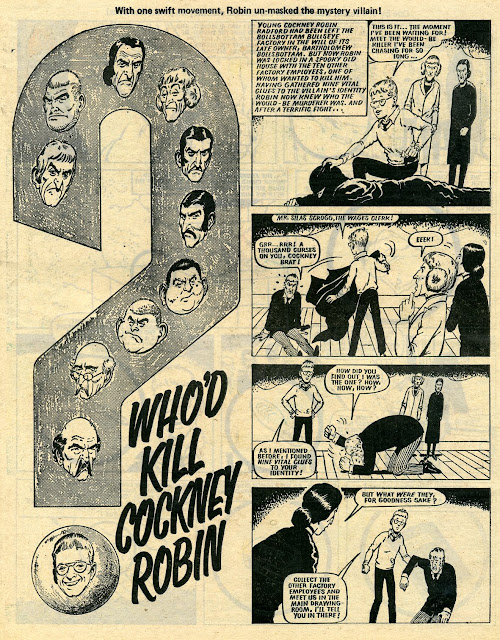 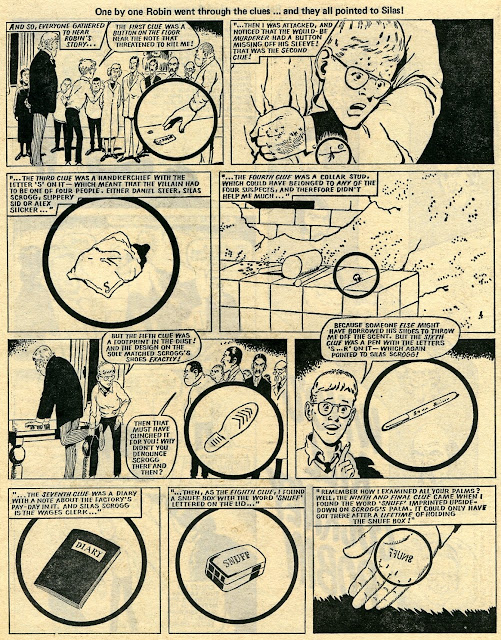 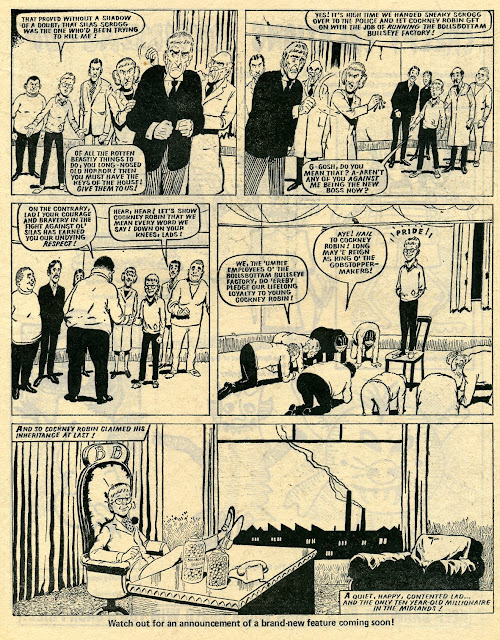 I am not a fan of adventure serials in IPC children’s humour comics of the 70s but this one stands out as particularly over-the-top IMHO. Of course, the story was written for the young reader of the day and I should know better than to scrutinize the script and rant over its alleged faults. In all likelihood many readers were thrilled by the yarn and enthusiastically recorded the weekly clues :)

On a positive note, the story had a well-conceived structure: nine clues were dropped over the period of nine weeks and by that time Cockney Robin already knew who the would-be killer was. Readers should have known too, if they had collected all the correct clues. 50 one-pound prizes were up for grabs but not for naming Robin's attacker. Readers were asked to list all the nine clues instead: 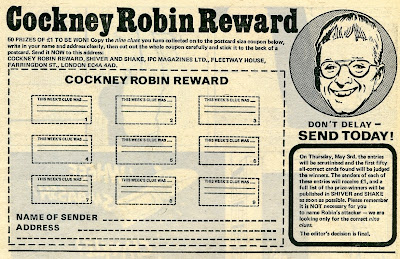 The story reached its climax next week in issue 10 and the correct clues as well as the murderous conspirator’s identity were finally revealed in the final episode in issue 11 (see the complete episode above). Names of the 50 lucky prize winners were announced 5 weeks later in issue 16: 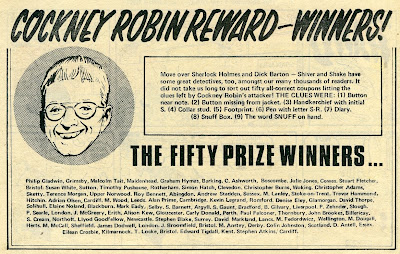 Illustrated by Tom Kerr, the story ran for eleven weeks in SHIVER section (issues 1 to 11). The first episode was 4 pages long and all the subsequent ones were three-pagers.
Posted by Irmantas at 6:30 PM 2 comments: