During the long history of British comics the weekly magazines came in a variety of sizes but to the best of my knowledge THE BIG ONE gets the prize for being the biggest of them all at 37 x 55 cms, or 14.57 x 21.64 in, while Nipper, with its early issues measuring just 15 x 21 cms, or 5.9 x 8,27 in, is on the opposite side of the size-scale.

Both experiments only managed short runs, which proves that size matters only as long as it is not one extreme or the other.

Below is a picture of the two oddities together to illustrate the contrast, followed by one where the pair is shown together with a copy of the familiar old newsprint Beano, to put the sizes into context. 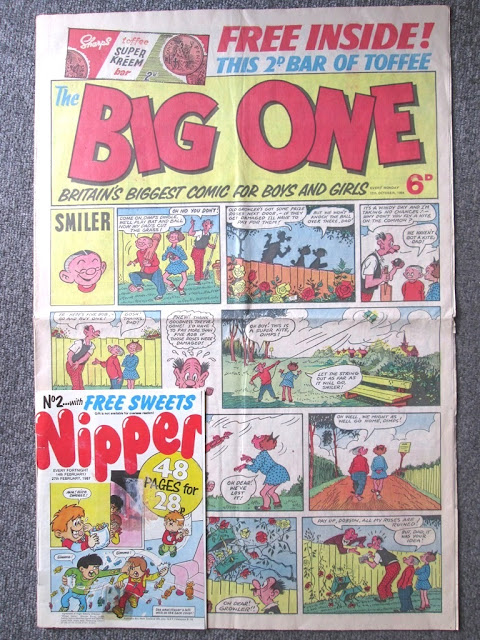 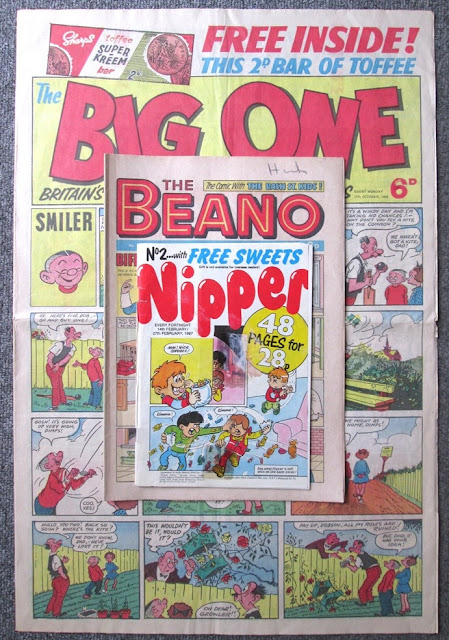 Email ThisBlogThis!Share to TwitterShare to FacebookShare to Pinterest
Labels: Buster, Comic oddities, The Big One


Not only were DC Thomson never big on comedy horror, they also rarely offered cut-outs or pull outs. However, two consecutive issues in 1976 (Nos. 1802 and 1803) did have cut outs, and not just some ordinary cut outs but monster-themed ones! 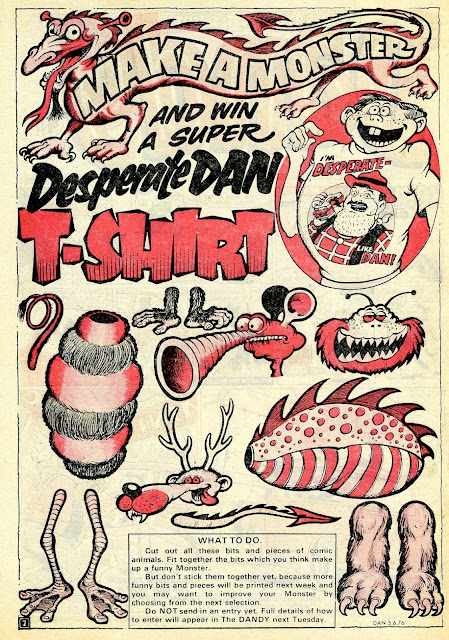 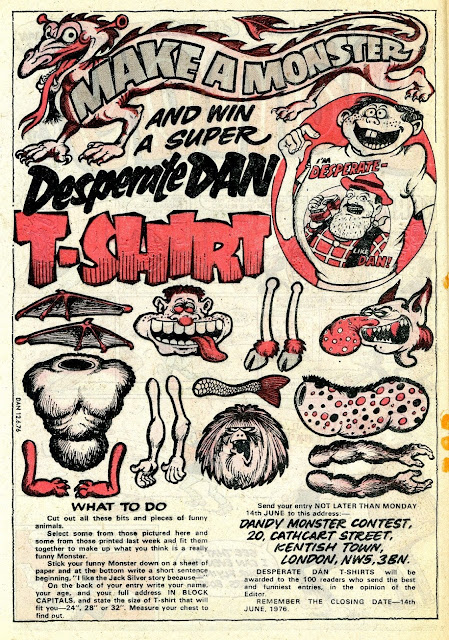 The 4-weeks’ competition began in issue 1800 dated 22nd May, 1976. At first the challenge was to dress up Korky but then they changed the theme for some reason and offered readers a possibility to assemble some funny monsters. 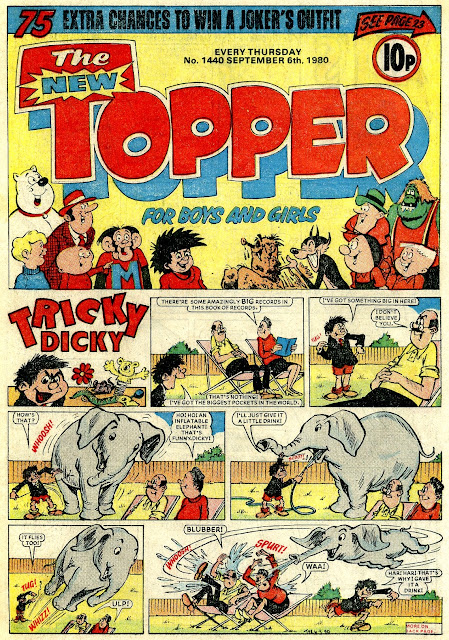 Differently from IPC, DC Thomson were never big on the horror comedy genre in their comics but the first “new look” issue of Topper in 1980 came with a 4-page all-horror THE EERIE EXTRA middle section. I don’t know how long it continued because it is just one of the very few issues of the comic that I have.

Note this is a landmark issue of Topper – the first one in A4 size. 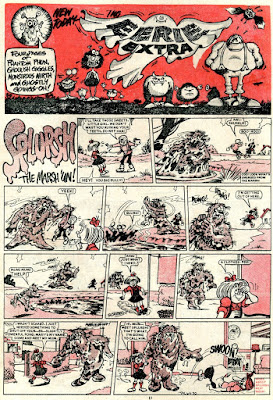 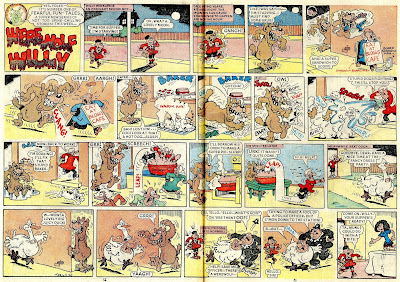 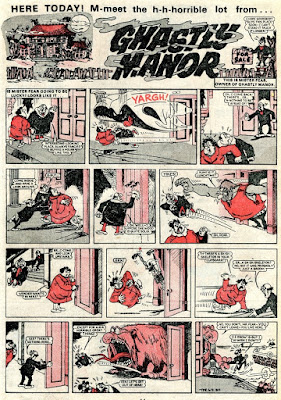 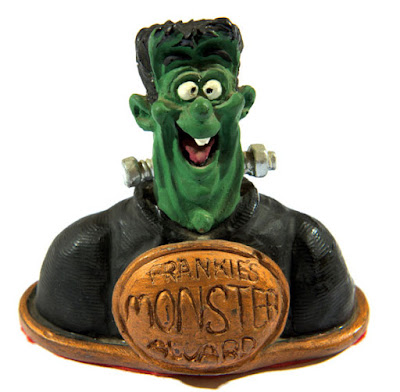 I’m back home after a brief but productive visit in the UK to meet with my mate with whom we are working on an exciting UK comics-related project that we will reveal in due course.


In the meantime, I’d like to share some interesting information which has recently come to my attention.


Those of you who follow Compal Comics online auctions and like Ken Reid might recall the bust of Frankie Stein that they offered a few years ago. Here is how they described the item: Frankie Stein Monster Award by Ken Reid for WHAM! (1960s). A one-off bust made by Ken Reid for a WHAM! readers competition that apparently did not take place. Entitled 'Frankie's Monster Award' the bust is made from resin and was modelled and painted by Ken with his brother's help. It measures approximately 4 x 4 x 2 ins deep. It is unique.


Someone ended up paying £275 for it but would have probably thought twice before bidding, had they known then what I know now. The truth is that the auctioneer had almost everything wrong in the description! The award was in fact offered in Whoopee! in the early 1980s. Here is the cover of the issue and the page announcing the competition: 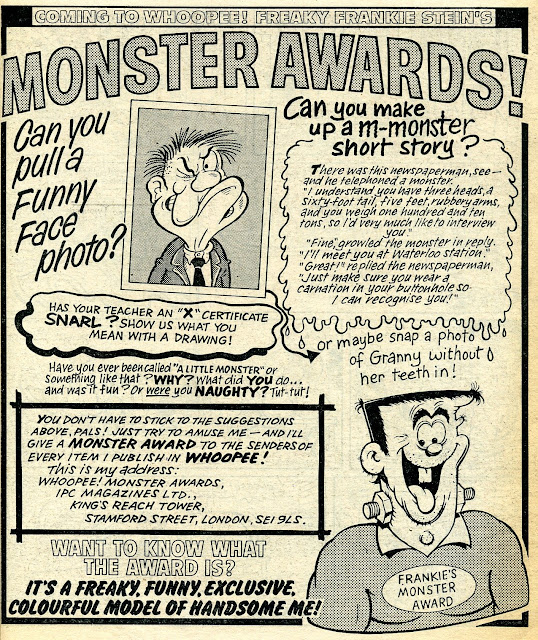 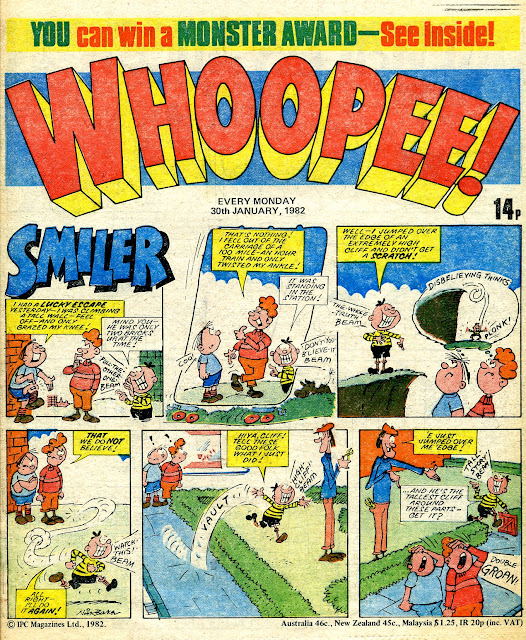 The first prize-winners were announced and their contributions printed in the issue of May 1st, 1982: 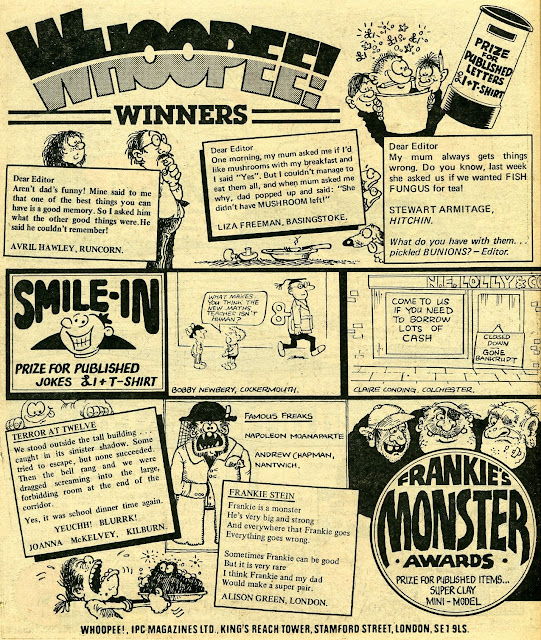 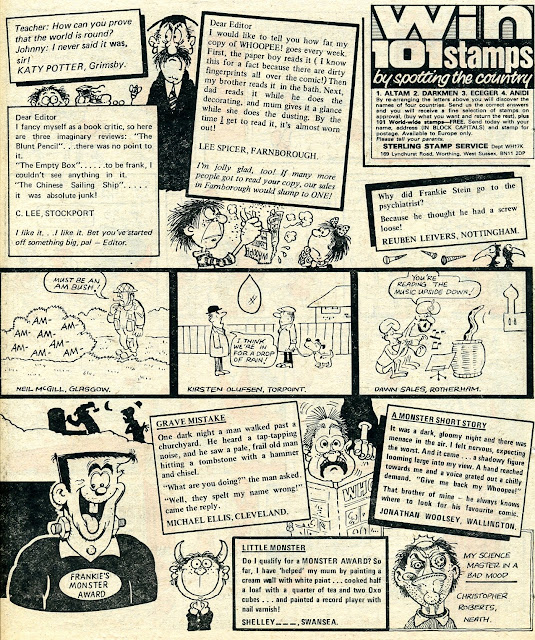 The competition continued for 22 weeks and ended in the issue of Sept 25th, 1982: 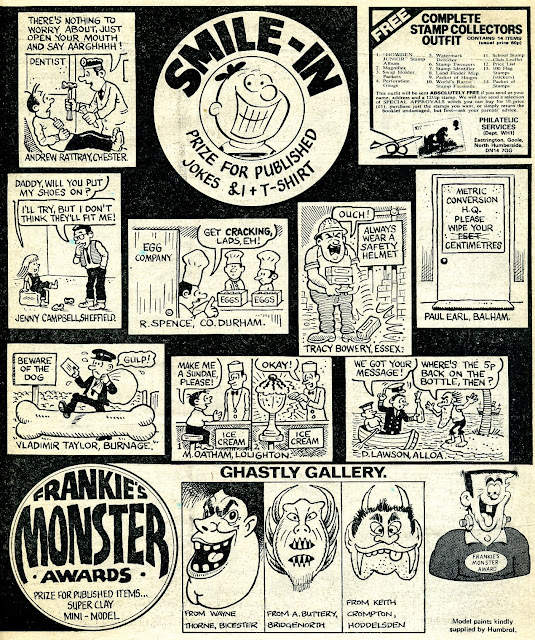 You can do your maths and see that at least 70-100 of Frankie's Monster Awards were handed out to the lucky winners so the gift may be rare but it is certainly not unique.


The auctioneer wasn’t completely wrong when he said it was made by Reid, only it wasn’t Ken Reid. The busts were in fact modeled and cast by Ken’s son Antony and his wife who made some 300 pieces of the award and shipped them to IPC. Unfortunately, the items were fragile and Antony didn’t pack them well enough so quite a few lost their bolts and other bits en route from Manchester to London. Antony still has a few of those left in his basement, here is an image of a coloured sample: 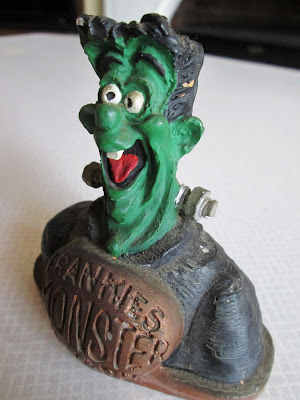 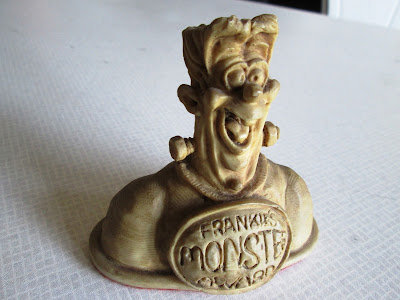 … and here’s an old photo of a squad of Frankies before it (the squad, not the photo) was off to London: 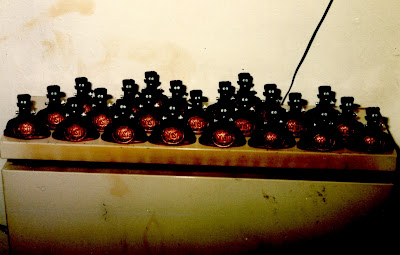 It is a nice item and I like the fact that it was modeled after Ken Reid’s original diabolical FS of the 60s rather its cuddly reincarnation of the late 70s/early 80s by Robert Nixon, but if you see another one on sale, don’t be misled by claims that it is a unique piece crafted by Ken Reid :)
Posted by Irmantas at 5:37 PM 1 comment: