WHO WAS BILL SWALLOW?

In my previous post I asked if my learned readers might have any ideas as to the identity of the Odhams employee by the name of ‘SWALLOW’ who wrote the letter to Ken Reid that I showed.

As it happens, I had an answer all along... I was checking my notes for something else the other day and found out that Ken had identified Bill Swallow as Editor of POW! in his diary.

I am aware that Alf and Bart were the official “spokespersons” for the Power Comics in the letters section and signed their replies to readers' questions. I also know that the Power Pack Index by Steve Holland says that the editor of the paper was Albert Cosser.

Ken’s notes, however, clearly suggest that POW! editor was Bill Swallow, and mention at least one phone call from the man with instructions regarding Dare-A-Day Davy strip.

I ran a search for the name in the context of Odhams comics but Google returned no relevant hits. I also checked the Dictionary of British Comics Artists, Writers and Editors by Alan Clark, and there’s no mention of Bill Swallow there either. Was he perhaps a sub-editor in charge of POW! humour strips? Or maybe he was in fact the editor who chose (or was instructed) to remain anonymous because differently from the letters section, News from the Floor of 64 (the editorial column) went unsigned (I did check my copies of POW!).
Posted by Irmantas at 12:11 PM 2 comments:


Ken Reid must have enjoyed himself when he worked for Odhams drawing Frankie Stein, Dare-A-Day Davy, Queen of the Seas, etc. because it looks like at least some of the staff were just as potty as he was and shared his sense of humour. This is demonstrated by the letter below that Ken received from someone at 69 Long Acre, London in the late 60s.

I am not sure who the author was because I’ve only seen the first page, unsigned. Any ideas as to who may have written it? It says “My name is Swallow, not Splutt”… at the bottom of the page, and it appears that the person was then in charge of POW! comic. 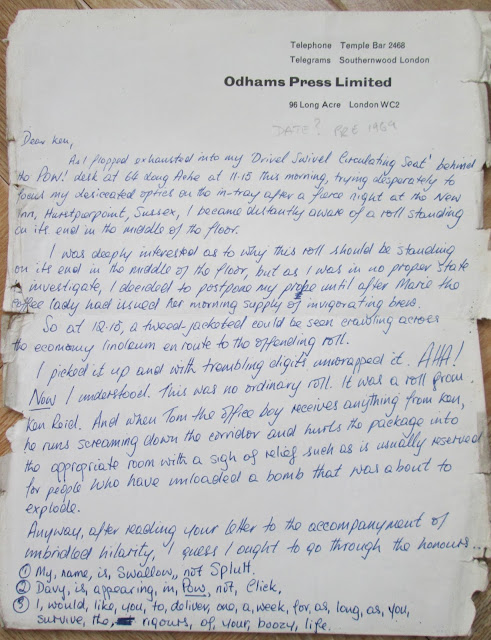