Four Alone on the Abandoned Island was an adventure serial that occupied two pages and lasted from the first issue of COR!! until 31st October, 1970 (issue No. 22). According to a post in Lew Stringer’s excellent blog, it was illustrated by Mike Noble (at least initially). The script-writer was Scott Goodall who wrote all adventure serials for COR!!

The scene was set in a remote part of Northern Wales at the Moordale Medical Research Centre. Three boys (Barry Norton, Fleshpot Farraday (“Fleshpot”) and Beanpole Baines (“Beanpole”) and a girl (Vera Miles) participate in an unusual scientific experiment to study the effects of exercise and controlled diet on children of different physical appearance. The three boys hate each other and keep trying to knock each other about, so scientists send the four on a four-week survival course in the mountains, hoping they might learn to get along. Curious about a strange red glow in the sky, the Four return to civilization and find that Britain has been taken over by weird soggy creatures called Spungees. The aliens are made of sponge and they fire soggy gas-bombs that stun people. The children discover that the landing of the aliens and their fake radiation blanket threat has prompted the government to issue emergency evacuation orders and the whole population has been transported to Europe. Spungees need water to thrive, they plan to flood the whole of Britain and use it as a base to conquer the planet. The Four soon learn how to repel the monsters with fire because Spungees dread heat and dryness. The children find alien HQ in the marshes on the edge of Dartmoor in Devon County. After a long sequence of cliff-hangers and multiple fallings into alien captivity and breakings back into freedom, the Four finally defeat the aliens, first by spilling oil into the river, setting fire to it and burning to death the army of aliens traveling upstream to establish more posts, then by grabbing the king of Spungees and demanding unconditional surrender from the aliens. British Army pilots are amazed to discover that liberation was achieved by four children who become national heroes and celebrities. The four stopped hating each other. They promise to stick together from now on. 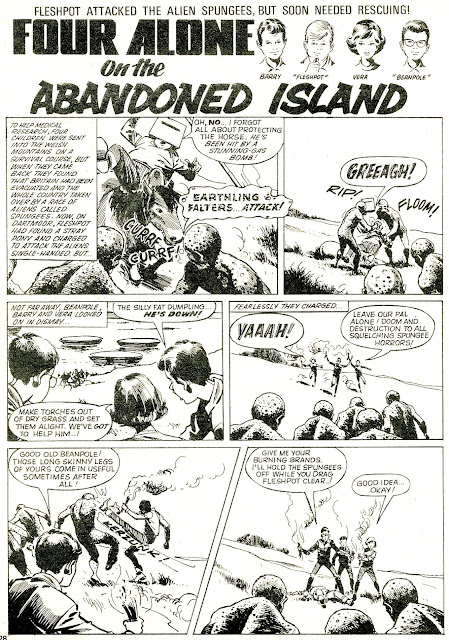 IMHO the story suffered from overuse of manufactured cliff-hangers alongside with pointless strife and name-calling between the children. Nonetheless, it was quite an OK adventure serial, particularly in comparison with the sequel …

The second serial ran from 1st May, 1971 until 18th September, 1971 (issue Nos. 48 – 68) and was called Four Alone Fight Formula X. The foursome are sent on a special mission to Castle Blaney Boarding School in the Scottish Highlands to investigate strange reports of rumblings in the night and farmhouses vanishing without a trace. The children find out that Herman Sourkraut, the school science master, has been secretly experimenting with Formula X that makes plants and living creatures turn into giant monsters. His experiments now complete, the evil scientist is ready to strike. Stage one of his sinister plan involves unleashing a swarm of bees that have their feet dipped in Formula X in order to make every plant they land on grow to giant size and cause chaos. Sourkraut’s plan is so cunning and devious that it takes readers and the four children a while to realise that the bee attack on a plant nursery in the village is only a diversion and that the evil scientist’s final mission is, lo and behold! to wreck Britain’s naval power by destroying the top-secret Holyoak Nuclear Submarine Base! Four Alone bravely deal with every giant monster that the evil scientist sends their way. Sourkraut’s plot is finally foiled and Fleshpot prevents him from escaping on board a pinched navy helicopter. The menace of Herman Sourkraut and Formula X is over at last. 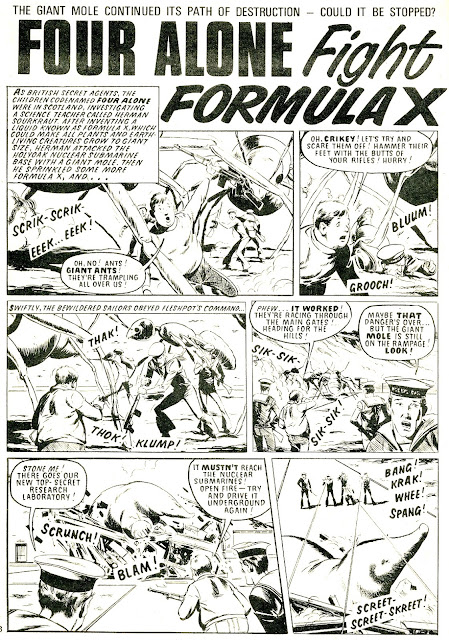 The quick summary of the plot makes it appear as if it was quite an exciting story to follow but IMHO it would have benefited a lot if the weekly cliff-hangers were just a tiny bit less made-up. To me the script clearly abused the possibility of introducing endless giant monsters many of whom came and went hardly contributing to the development of the story.

The two serials were the only ones that appeared in COR!! weeklies but there were four more stories in COR!! Annuals and one in a COR!! Holiday Special over the years. Here is the list:

COR!! 1972 Annual: Four Alone in the Castle of Fear (8 pages) – the foursome foil the plot of an evil scientist Llewelyn to launch a missile attack on London from his secret base in a crumbling castle in Wales.

COR!! 1973 Annual: Four Alone and the Alpine Adventure (8 pages) – British intelligence sends the Four to an Austrian ski resort on a mission to escort to London a Hungarian scientist who has defected to the West.

COR!! 1974 Annual: Four Alone and the Sky Jackers (8 pages) – Four Alone are on their way to visit Vera’s brother in the Middle East when a gang of terrorists hi-jack the airliner and demand money for their political cause.

COR!! 1975 Holiday Special: Four Alone Beside the Seaside (5 pages) - Four Alone help catch a gang of thieves who pinched plans of a new boat design from Russell Wolf, boat designer. It appears that the episode was illustrated by the same artist who drew Rat Trap and whose name is unknown to me. Here is the last page of the episode:

Posted by Irmantas at 7:08 AM No comments: