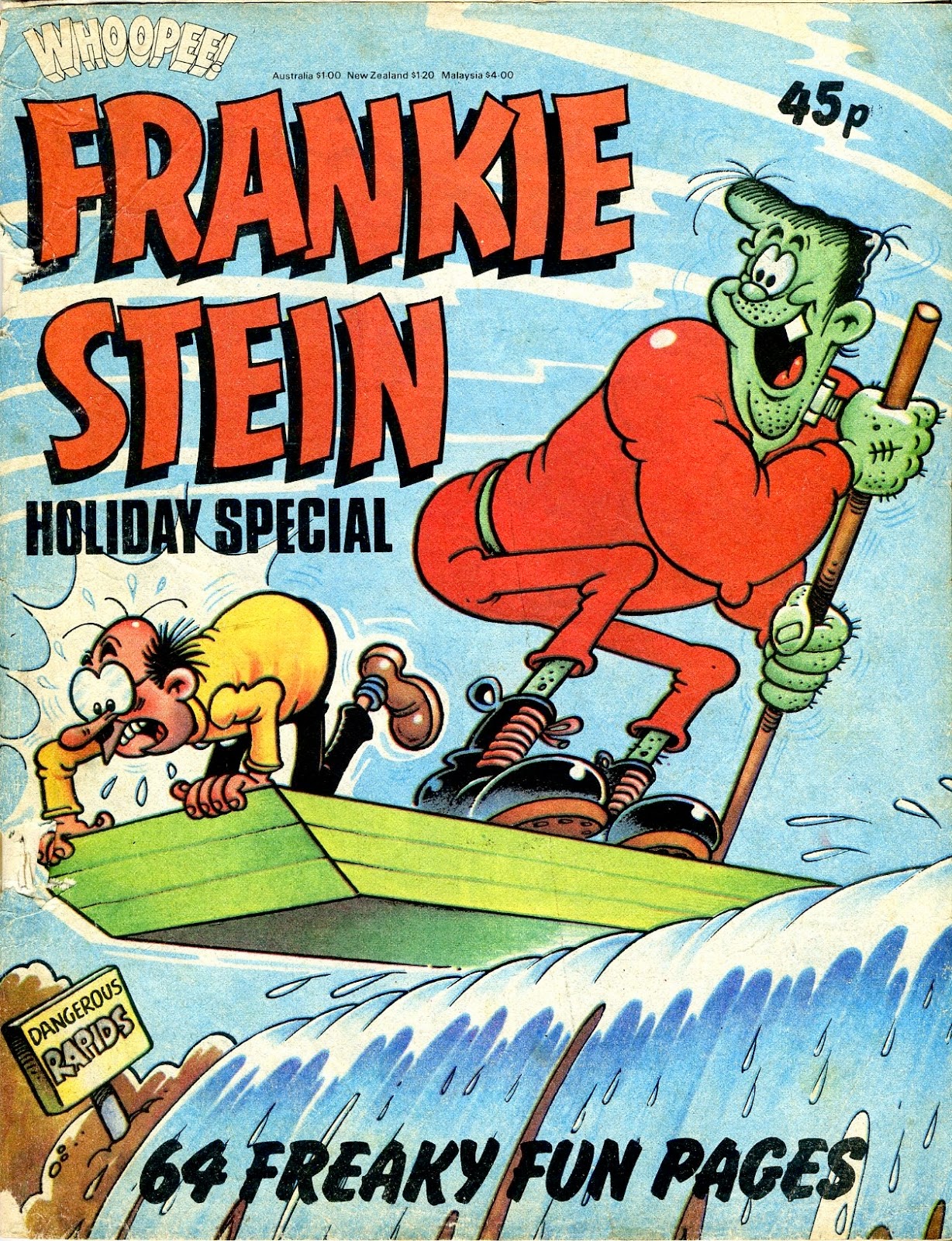 The penultimate edition of Frankie Stein Holiday Special came out in the Summer of 1981, it had 64 pages and cost 45 p.

There were 26 pages of Frankie Stein in it, mostly new material. It was the second year in a row that John Geering drew the main story for the magazine. Frankie Stein in ‘No Holds Barred’ consisted of 3 parts and occupied 18 pages. Crackpot inventor Professor Cube has an idea that putting his lab-manufactured son behind bars might be a great way to get rid of him so he writes a letter to the local Zoo telling them about a new and very rare animal Frankius Stupidius. A team of Zoo keepers set off after Frankie who senses foul play and runs as if his life depended on it. The mindless pursuit causes lots of damage in destroyed buildings and smashed vehicles. Owners have little doubt as to who should pick the bills and the poor inventor ends up as a Zoo exhibit: 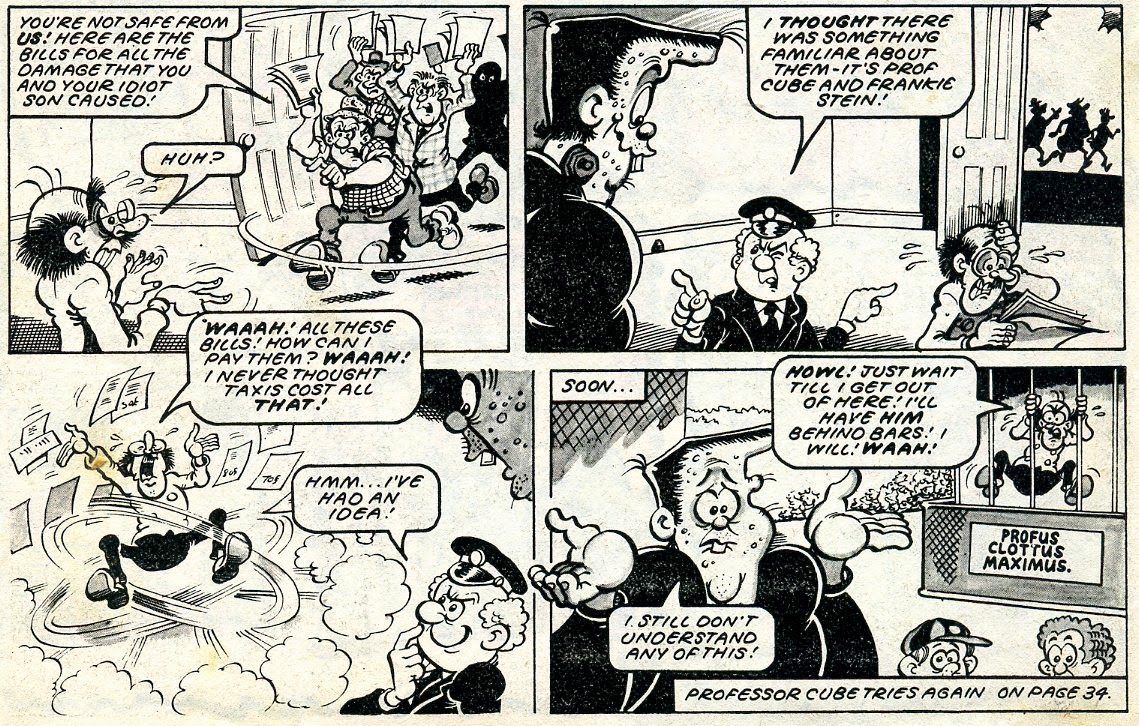 After enough people have paid to look at Prof. Cube to pay for all the damage, he is released from the Zoo and realizes that Zoo was the wrong kind of bars that he wanted Frankie put behind, and that prison was the answer. He tries a series of ploys to get Frankie in trouble with the law but ends up on the wrong side of the bars himself, again. 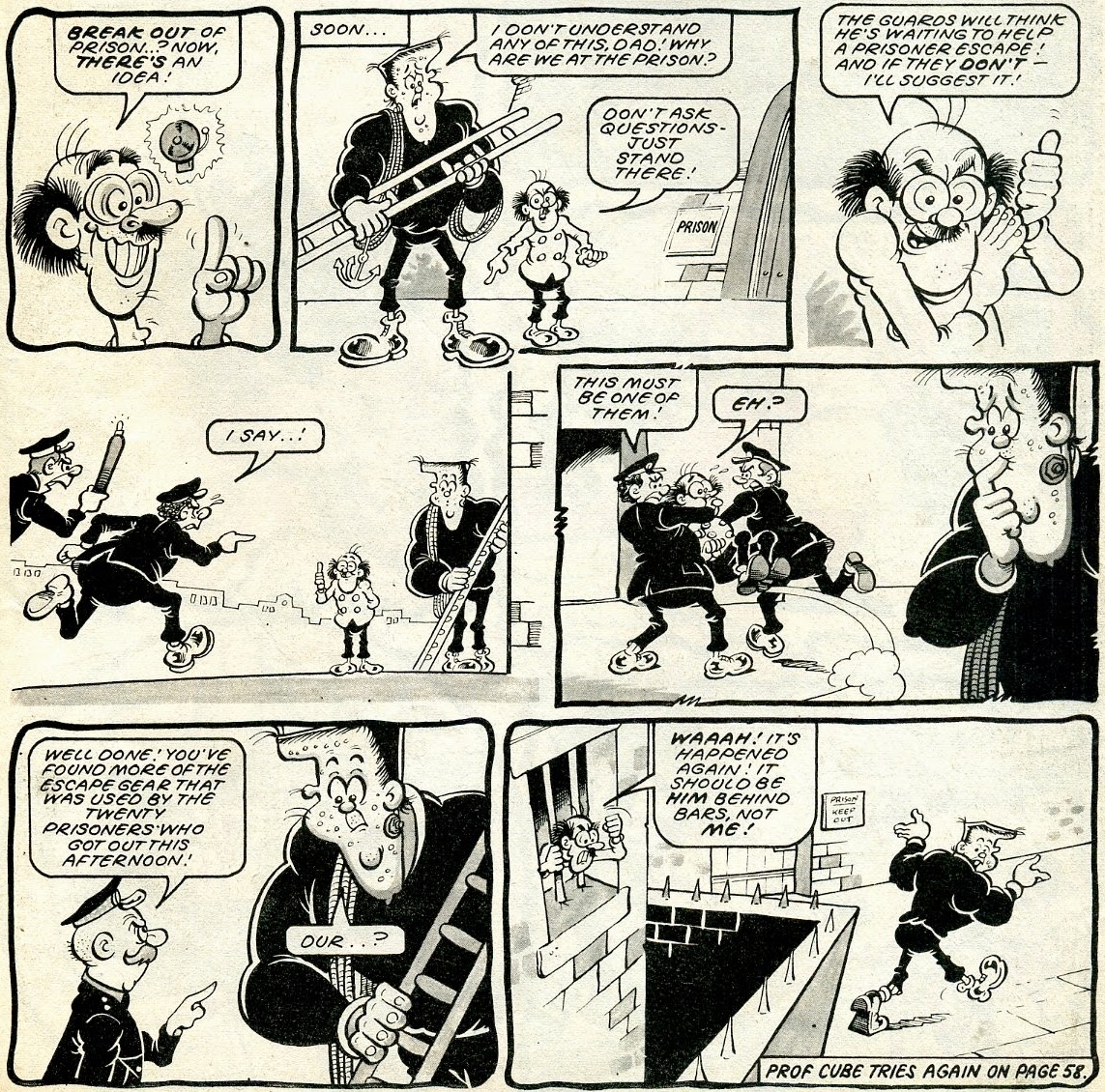 Upon his release, Professor Cube has an idea that if he can’t put Frankie behind bars in Britain, he should try somewhere else. He tells Frankie he has found him a job as a secret agent and that his first mission as Double-O-Nothing is to throw a stink bomb at the chief of a secret rocket base at Bugrolia. Frankie does well, is decorated by the real British Secret Service and gets more assignments in exotic countries which he carries out brilliantly, albeit always by accident rather than design. Oh, and his plotting Dad gets himself locked up once again. 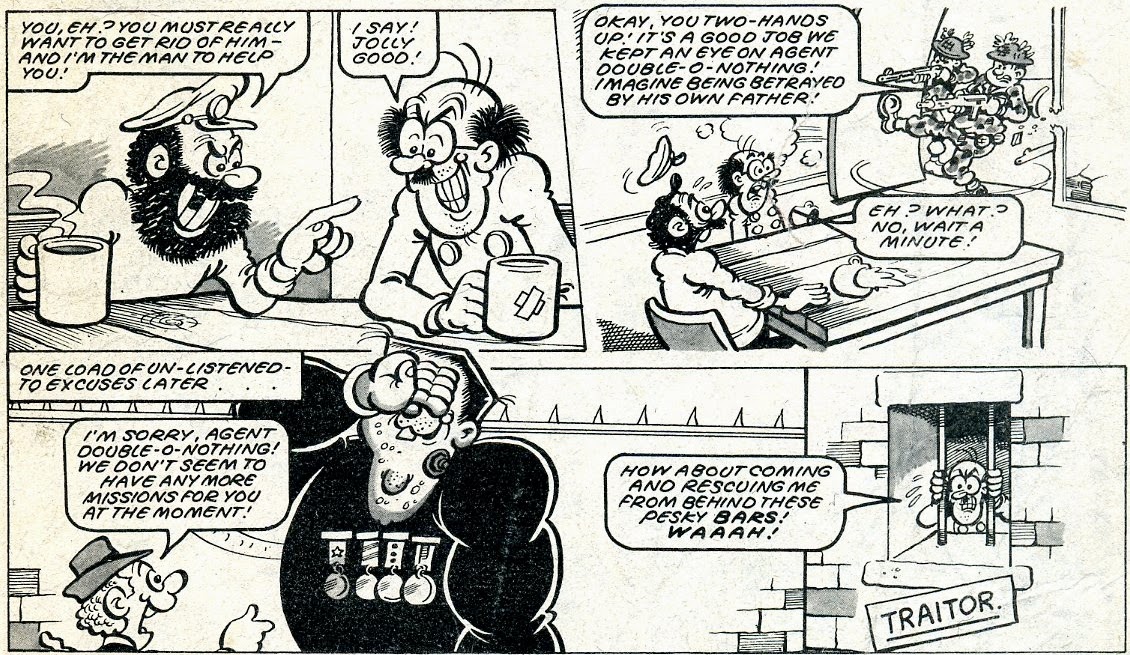 The Holiday Special also contains a two-page set of Frankie Stein by Robert Nixon which is a reprint from WHOOPEE!  Besides, Frankie’s name can be found on two reprint pages of Ticklish Allsorts by Les Barton from MONSTER FUN COMIC.


Nigel Edwards contributed one page of Frankie Postcards and two pages of Freakie Frankie Jokes! The editor of this Holiday Special kept Nigel Edwards busy: in addition to the three Frankie Stein pages, he also drew two pages of Creepy Cartoons and Monster Hits! gags, as well as Escape – a puzzles game on the centrespread, all in full colour (this is the first Frankie Stein Holiday Special without a poster of Frankie Stein). I really like his style, here are some examples: 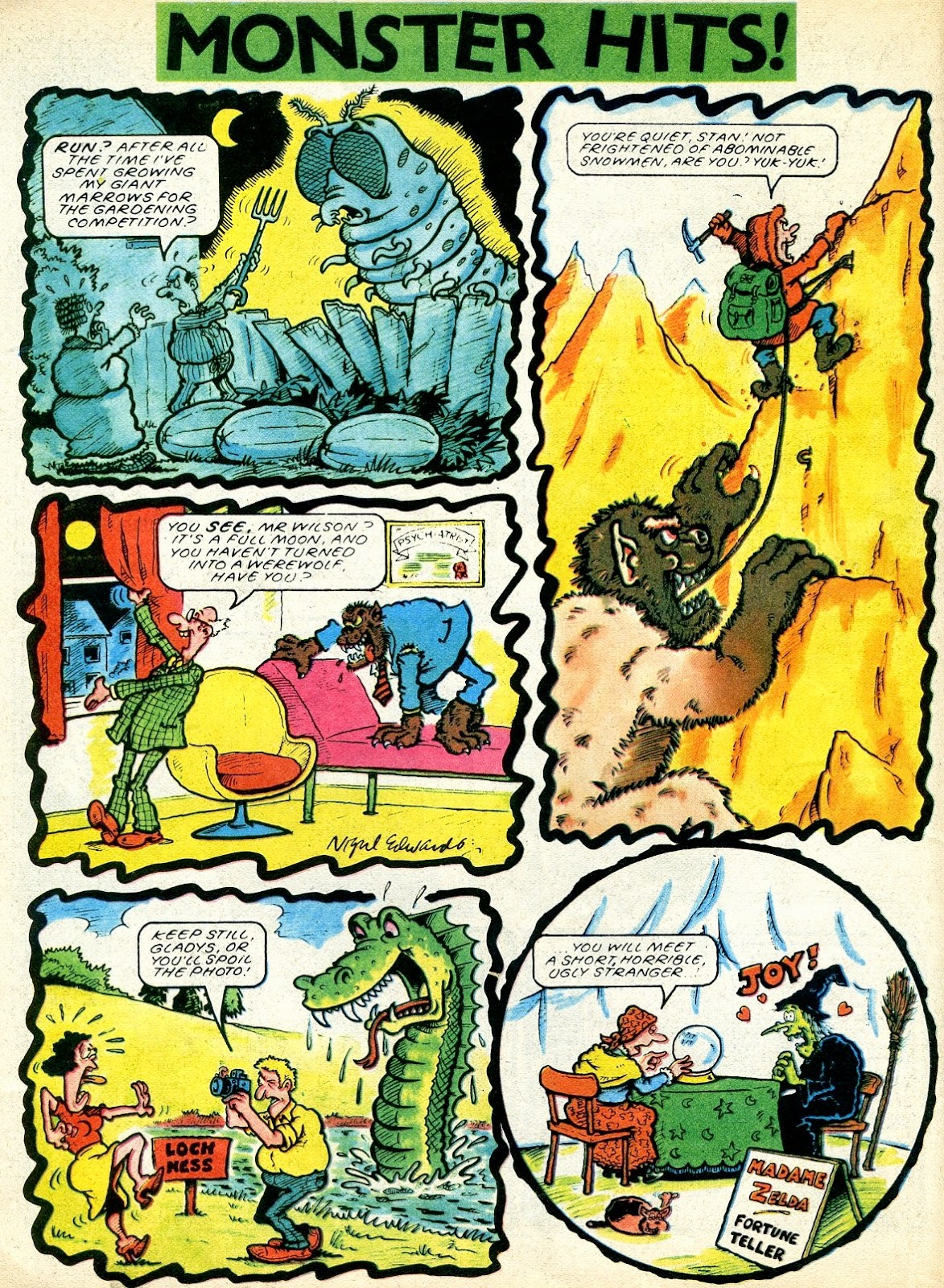 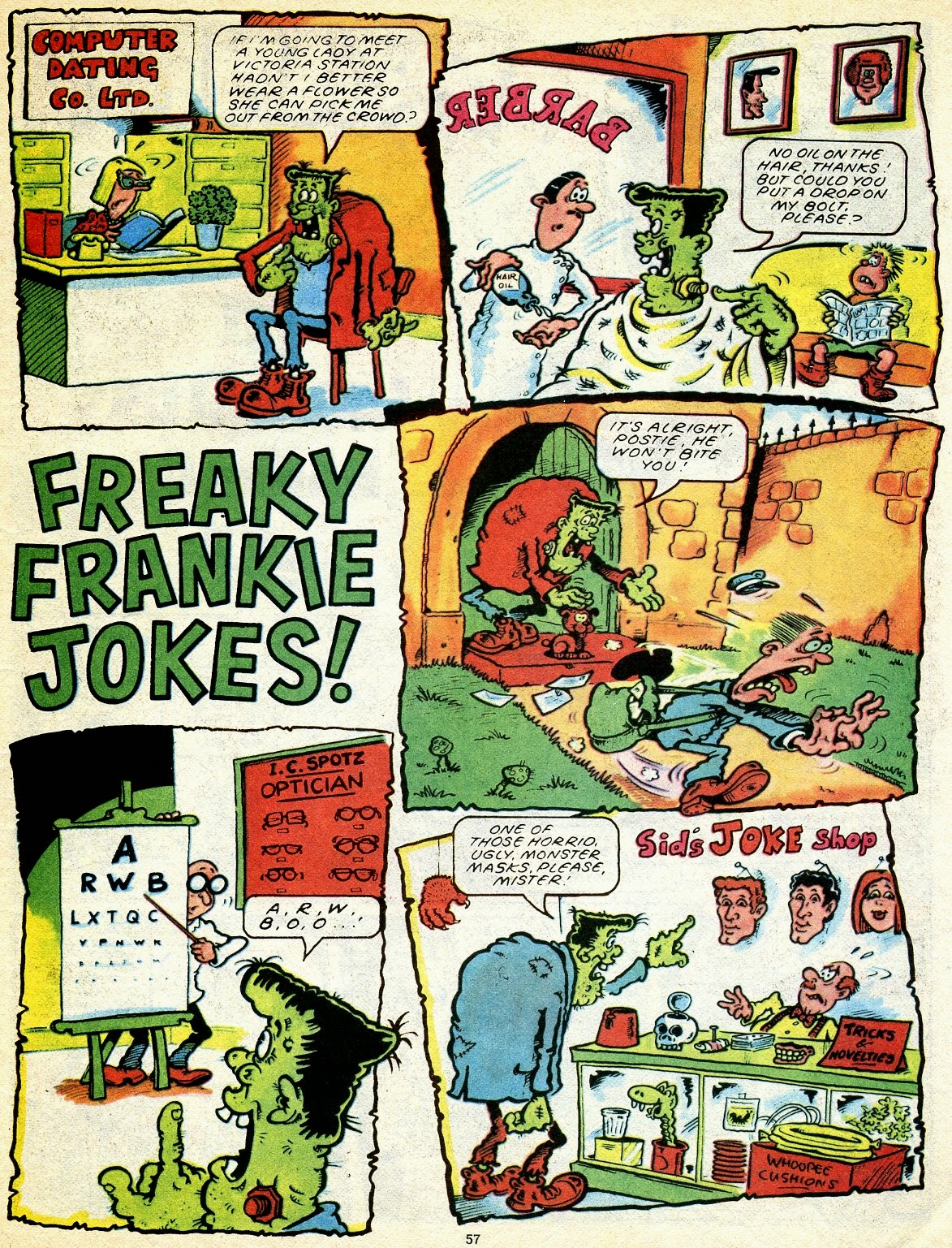 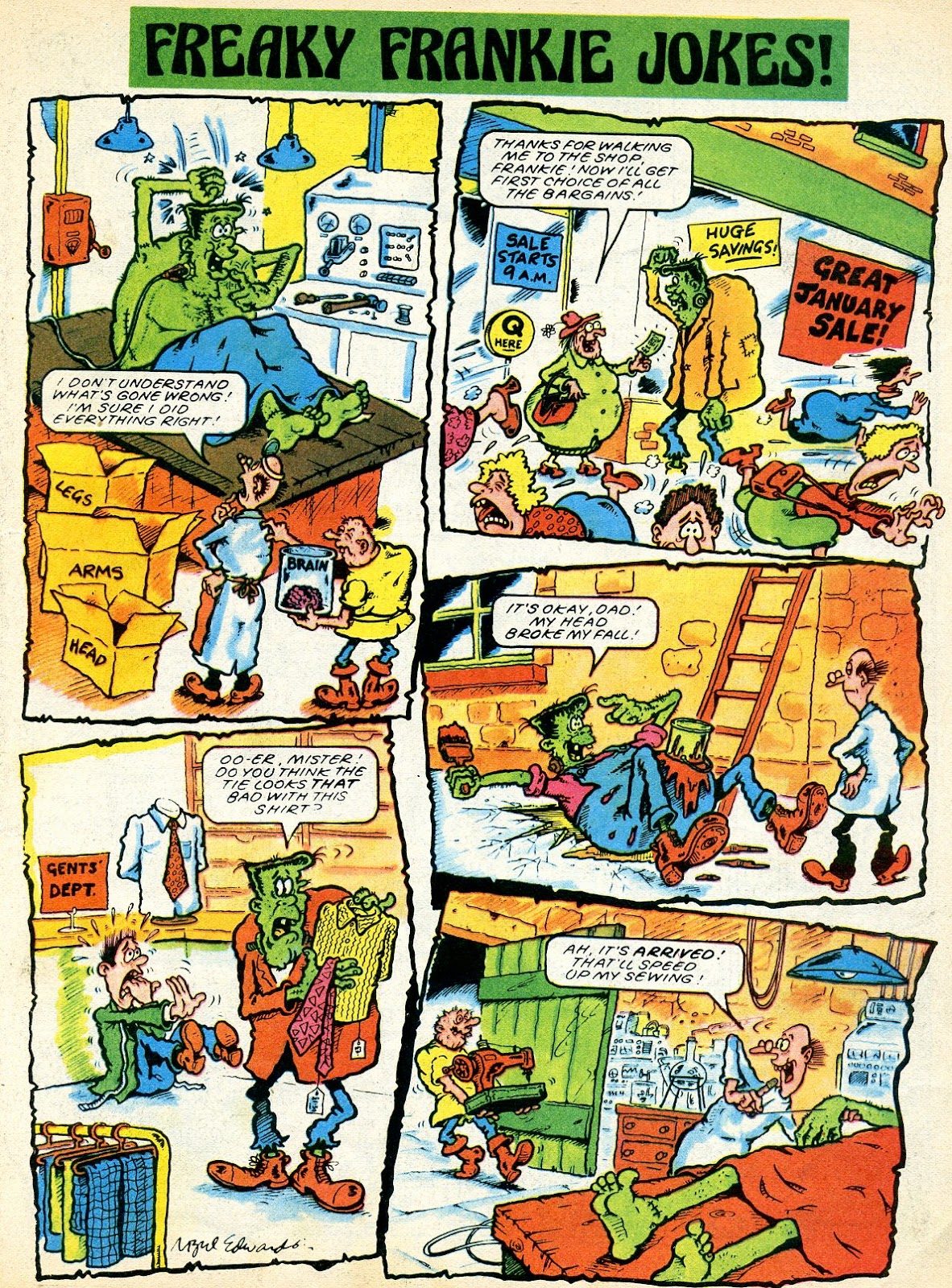 Mr. Hill illustrated two episodes of Monster Movie Makers. In the first one Carlo Monte realises that their titles are too way out and they need to do something more down to Earth. The idea of a film ‘It Came from the Cabbage Patch’ about a mutant caterpillar comes to his mind. It has to be the biggest, best and most expensive monster movie ever made so they hire all Britain’s top names to play the giant caterpillar: 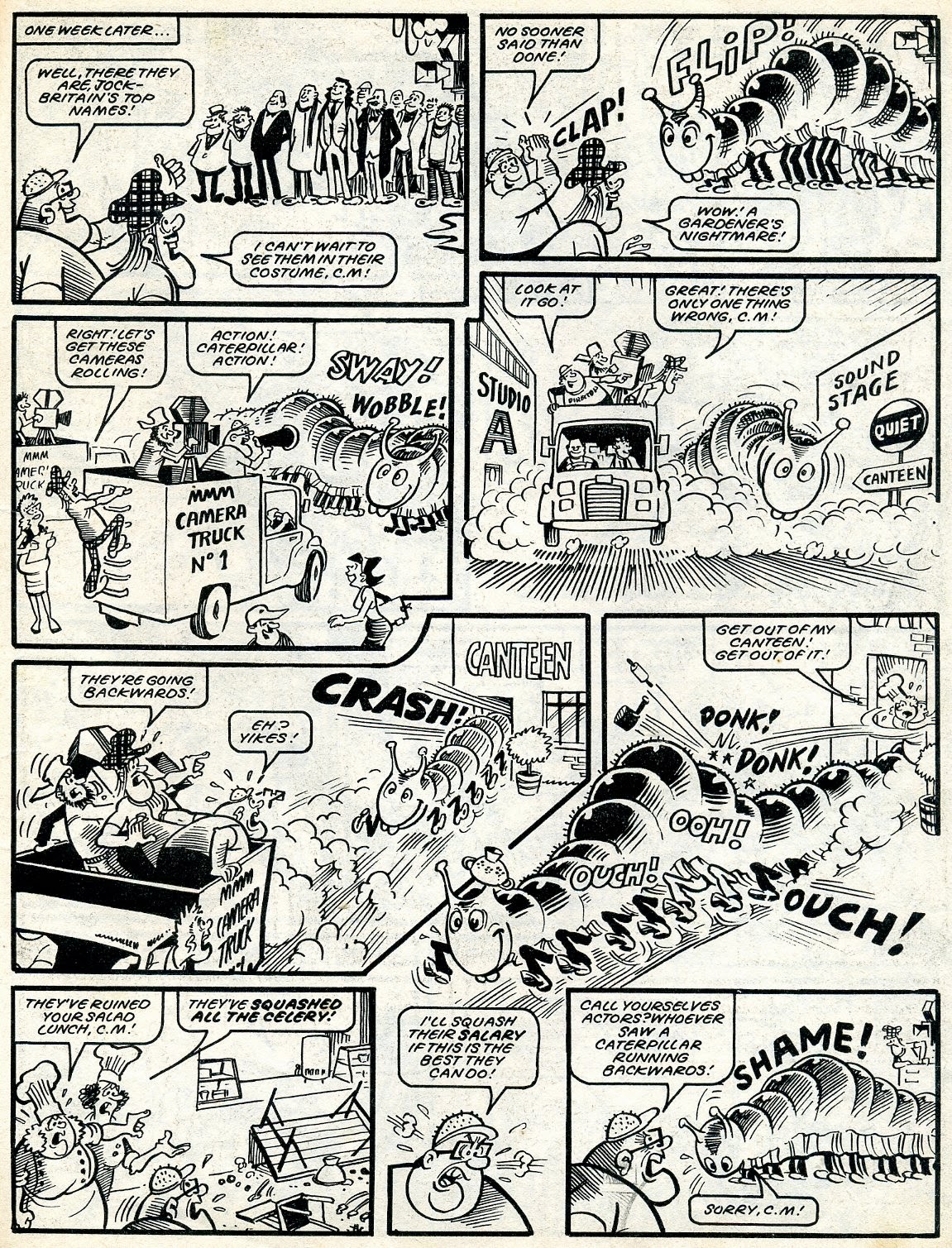 Things don’t go quite as planned but the film turns out a massive success and they win more Oscars than they can carry: 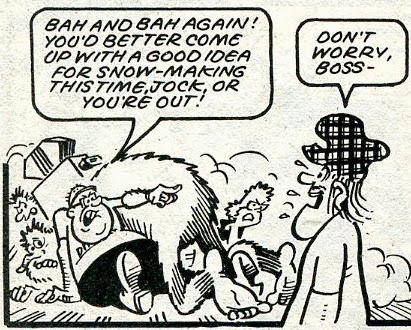 In the second story Carlo Monte and his crew are about to film their new blockbuster ‘The Abominable Snowman Strikes’ but it is the middle of summer and they need snow for the setting. They try salt, shaving foam and finally soap flakes. The result is not a horror movie but a Monster Comedy…

Let’s see what Computer Cop had on his hands in this Holiday Special. Well, he is in the bank vaults getting ready to transport the World’s biggest diamond to the museum. The crafty crooks come well-prepared once again but stand no chance against the super robo-cop. Too bad his chief is a clumsy old geezer: 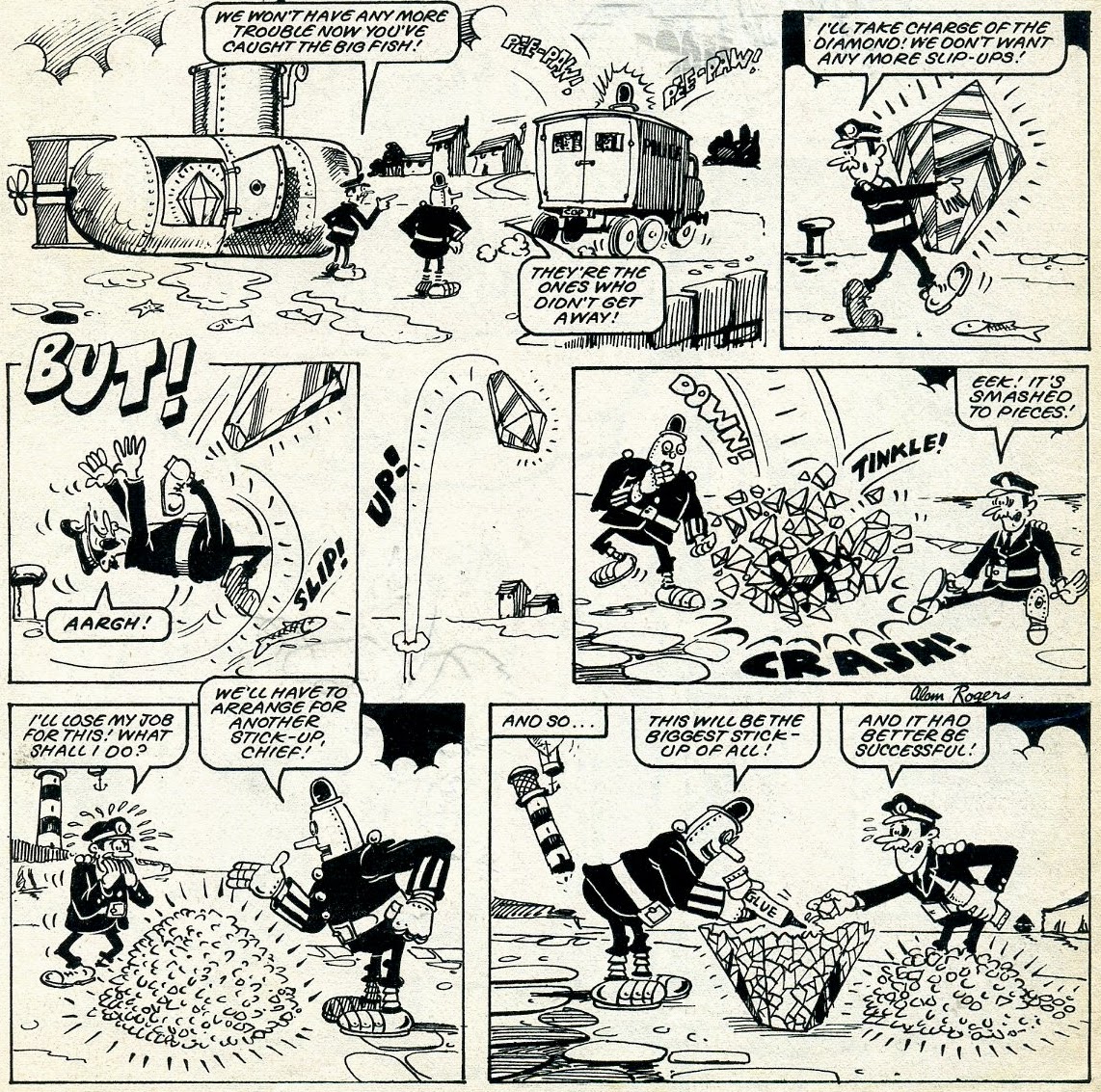 There is also a rushed episode of Gook the TV Spook by Artie Jackson, and that’s it as far as new material goes. The rest of the pages are reprints: there are 3 pages of Reg Parlett’s Freddie Fang from COR!! and the whole run of Grizzly Bearhug… Giant by Andy Christine from MONSTER FUN COMIC. Both have been covered in their dedicated posts on KAZOOP!, you can revisit the posts HERE and HERE. 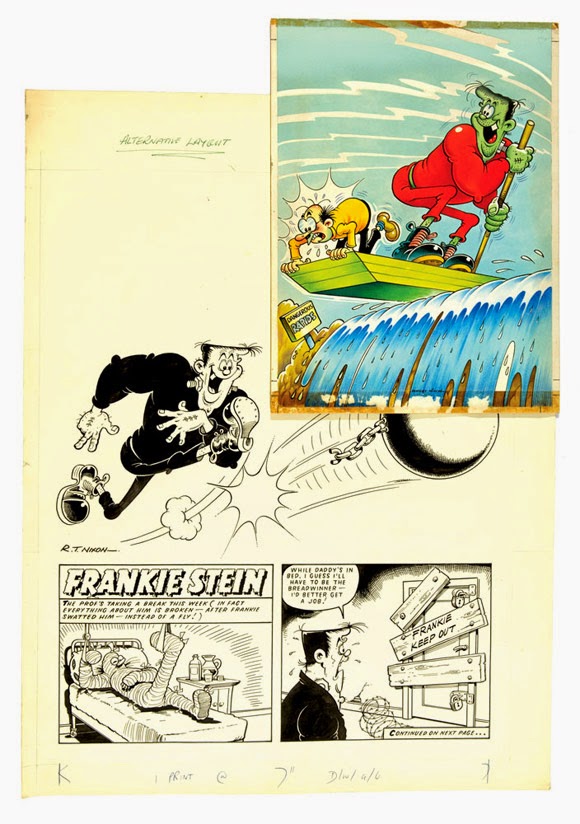 Front cover artwork for this FS Holiday Special was offered by Compal in their Autumn 2010 auctions. Here is how it was described: Frankie Stein Special original front cover colour artwork (1981) drawn and signed by Robert Nixon with Whoopee Frankie Stein page 1 original artwork (1981) also drawn and signed by Robert Nixon Special: Poster colour on board. 13 x 9 ins; Page 1: Indian ink on cartridge paper. 18 x 14 ins. They got the date of the front cover art right this time, but the b/w page was actually first used for the front cover of SHIVER AND SHAKE dated 21st September, 1974). The winner paid £181.

Images 2014 © Egmont UK Ltd.  All rights reserved. Used with permission.
Posted by Irmantas at 7:03 AM 6 comments: 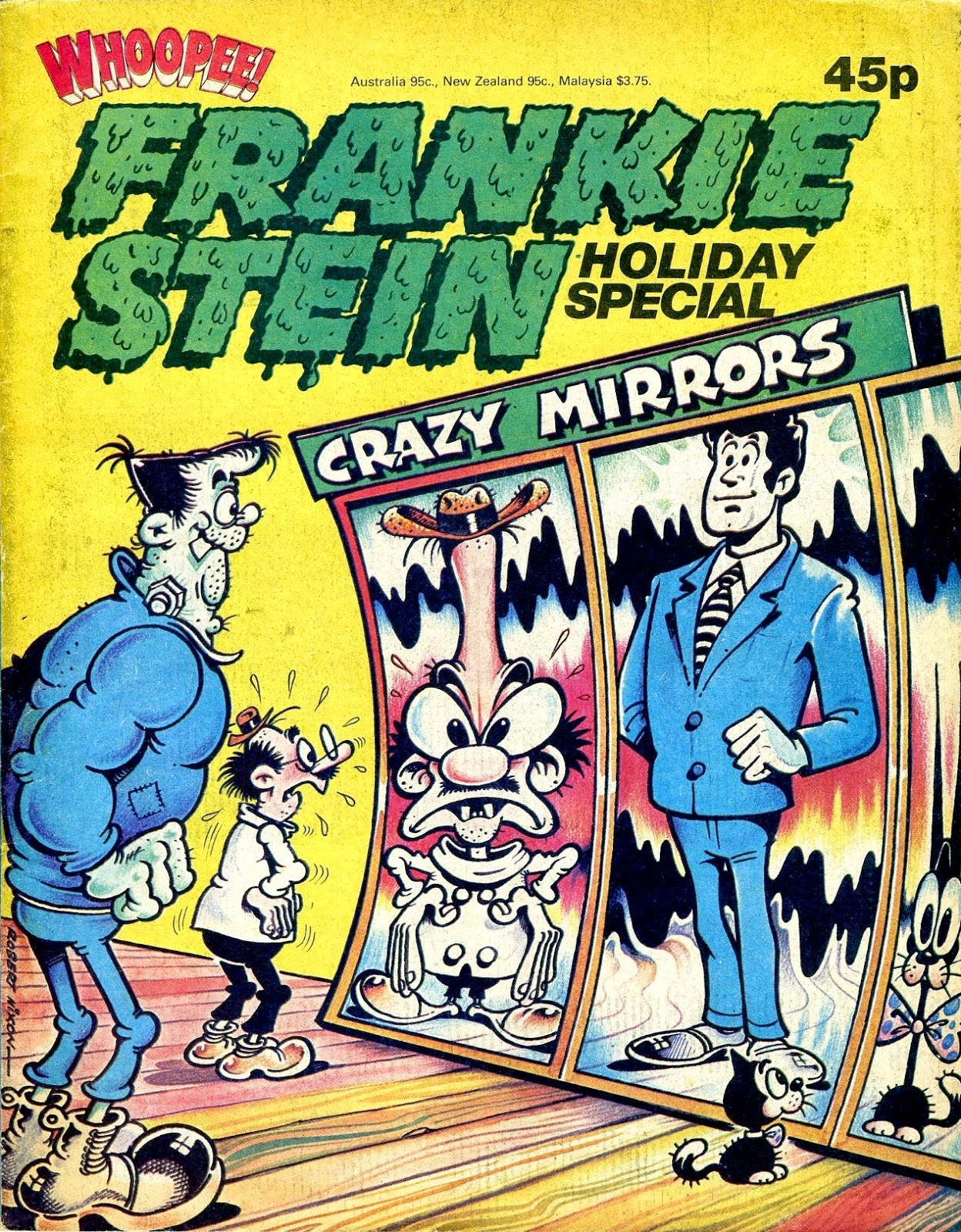 WHOOPEE! FRANKIE STEIN HOLIDAY SPECIAL 1980 had 64 pages and cost 45 p. Frankie Stein was given 20 pages, including the front cover and the pull-out poster by Robert Nixon whose style had changed dramatically for the worse since the first FS publications. The poster is nice, though: 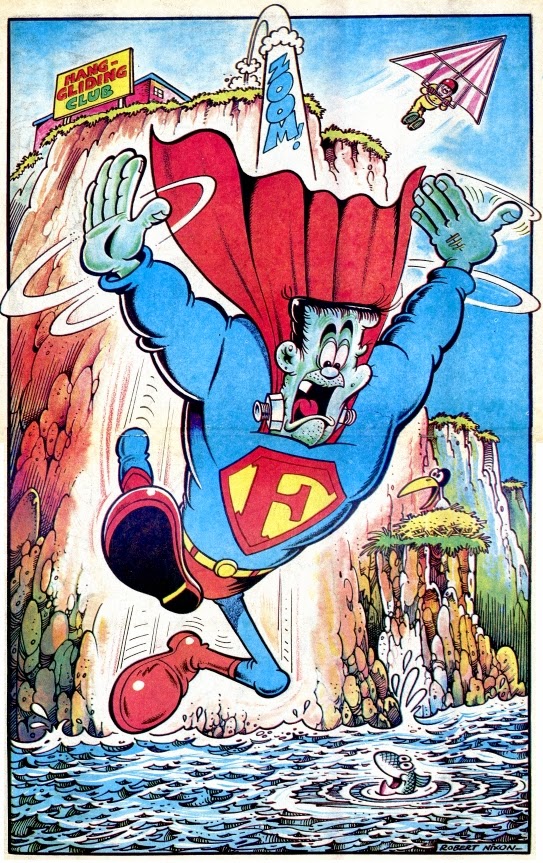 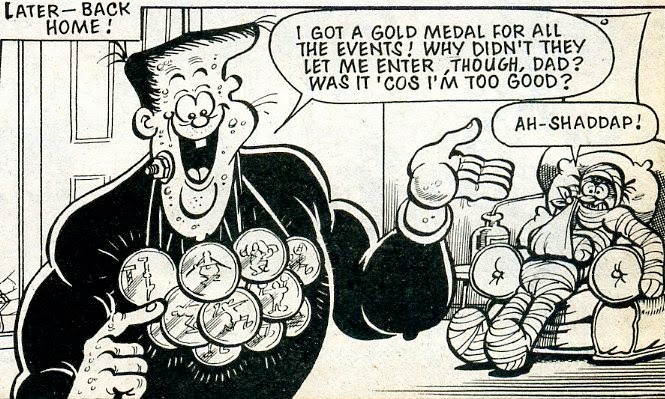 John Geering drew 2 Frankie Stein stories – an 8-pager and a 6-pager. 1980 was the year of Moscow Summer Olympics which was boycotted by many countries because of the Soviet invasion of Afghanistan. British athletes competed under the Olympic flag and it looks like Frankie Stein nearly made it to Moscow as part of Team UK. I showed the story in its entirety in the series of London Olympics blogposts a couple of years ago, you can view it HERE. 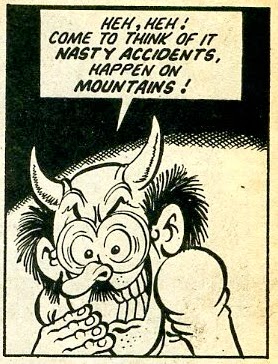 In the second Frankie Stein story Professor Cube realises that nasty accidents happen to mountaineers so he takes Frankie to conquer some peaks. Sure enough, a series of accidents does occur and Dad is at the receiving end once again. Frankie meets a Yeti and his family but Prof. Cube causes an avalanche which brings the Yeti hut down, alongside with a village at the foot of the mountain. Now Dad has to share Mildew Manor with four monsters instead of just one: 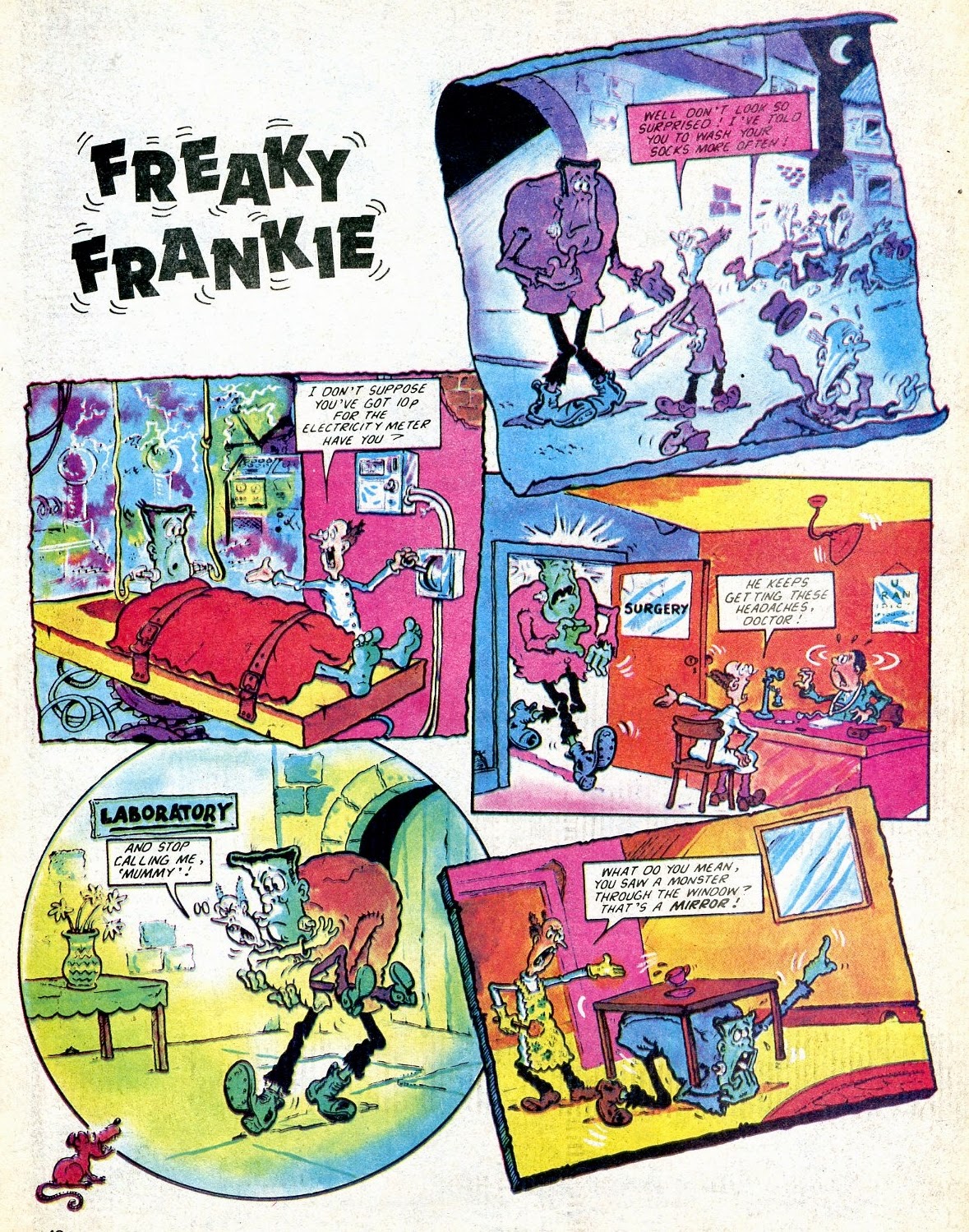 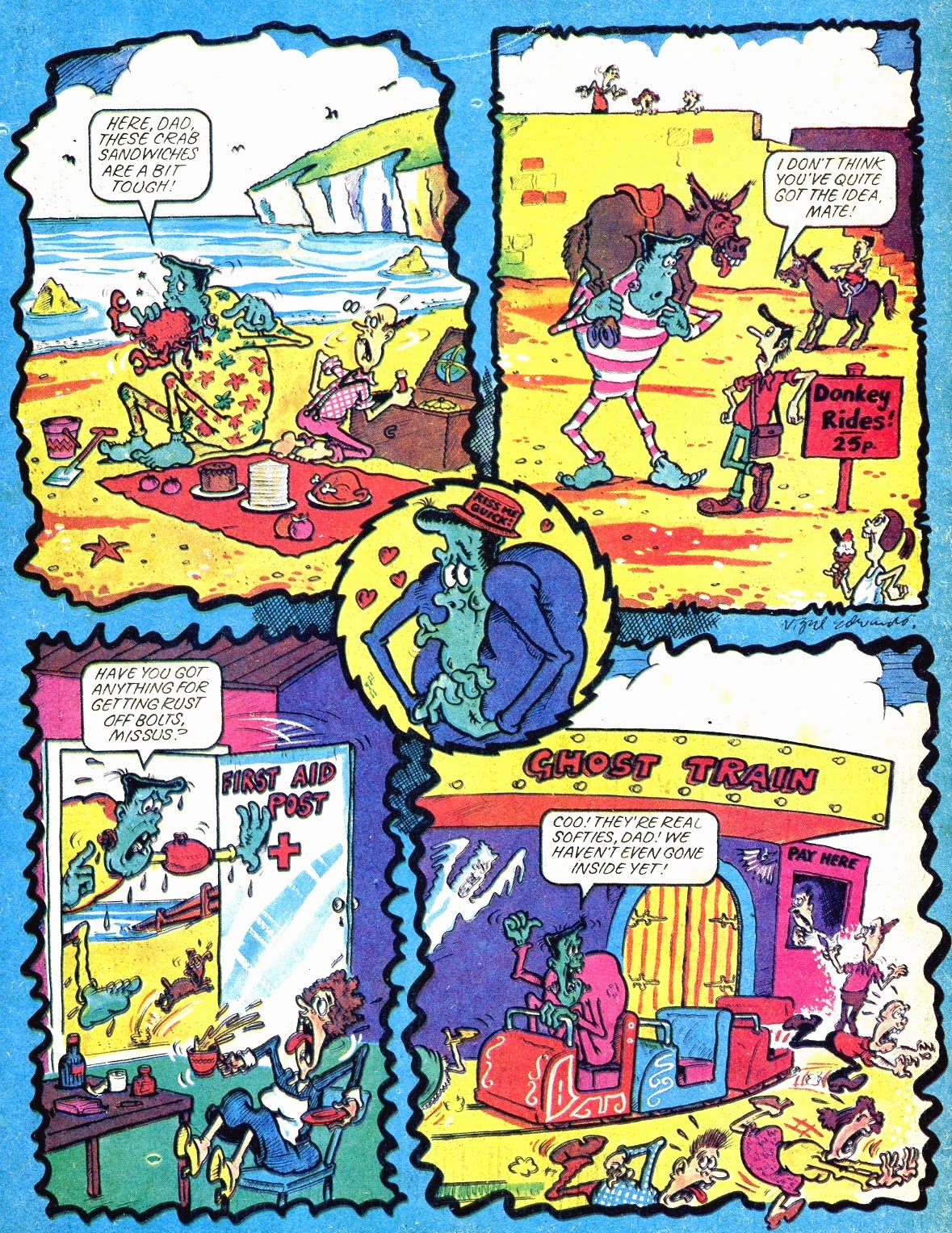 There were four non-Frankie Stein strips that weren’t reprints:  Monster Movie Makers (4 pages by Mr. Hill), Computer Cop (4 pages by Alan Rogers) and Gook-TV Spook (2 pages by Artie Jackson) were familiar to readers from previous FS books and magazines, while Animal Olympics (5 pages by Martin Baxendale) was new to them.

Monster Movie Makers manufacture a live dummy Bigfoot and travel to the USA to film on location in Timber Country. All is well until they upset the real Bigfoot: 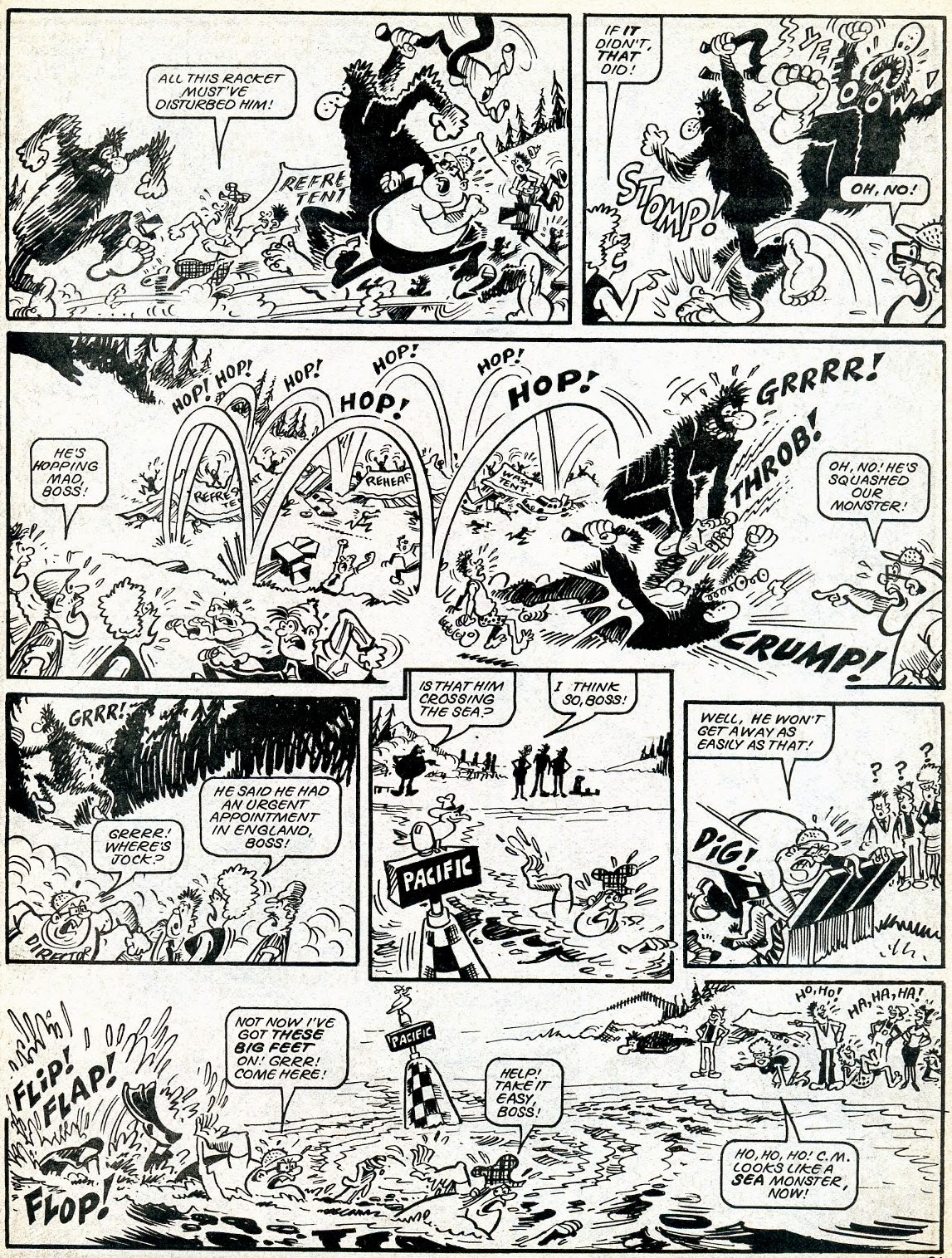 Computer Cop is on duty outside the secret inventions laboratory but a gang of crafty crooks outsmart him and steal a super-magnet which attracts anything the operator wants. The crooks are off to do some “window-shopping” with the jewellers but Computer Cop prevails in the end.

In Animal Olympics Mr. Frost the Head Zookeeper is off to watch the Olympics on the telly leaving all his chores to Fred the Assistant Zookeeper. A sports enthusiast that he is, young Fred organises his ‘alternative’ Olympics with Zoo animals as athletes. The style of Martin Baxendale strongly reminds that of his Father’s, perhaps he got some advice and assistance from Leo Baxendale when drawing the set.

As far as reprints are concerned, WHOOPEE! FRANKIE STEIN HOLIDAY SPECIAL 1980 has 2 pages of Ghoul Guides (from KNOCKOUT), 3 pages of Monkey Nuts (from I don’t know where) and 1 page of Tell-Tale Tess (from COR!!) – all seen in previous FS publications. The one that wasn’t was The Ghostly Galleon – the longest story in the magazine, spanning 18 pages. The story appeared in Shiver and Shake weeklies No. 71 – 79 and is reprinted in full, except that readers of SH&SH who followed the serial had an opportunity to win some cash which wasn't offered to readers of the Holiday Special. I reviewed the story in my series of SHIVER AND SHAKE strips, you can check the article out HERE (frankly, it is not exactly the best SHIVER AND SHAKE adventure strip).

Images 2014 © Egmont UK Ltd.  All rights reserved. Used with permission.
Posted by Irmantas at 7:02 AM 3 comments: