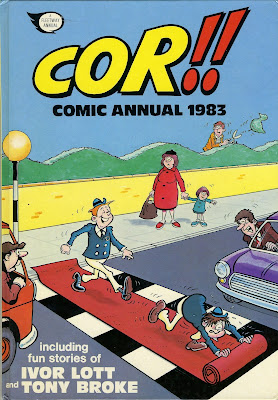 In this annual Football Madd was illustrated by an artist whom I don’t remember seeing anywhere else. I have to admit I am not very well familiar with new British artists from the 80s: 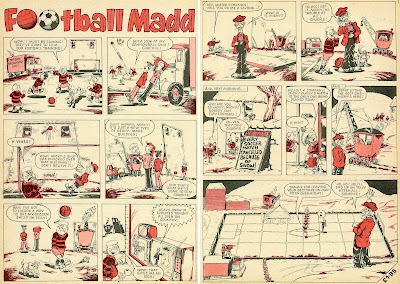 There were four one-offs.

Artful Artie was a version of Smartie Artie – a strip that appeared in COR!! 1982 and 1984 annuals. Both Arties were illustrated by the same artist. It was basically the same strip with a variation of the name. Smartie Artie appeared in two books and technically is not a one-off so it will be covered separately (although frankly there’s little to cover – I don’t think much of the stories or the artwork). Here is a sample page of Artful Artie: 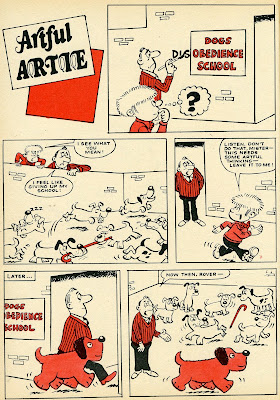 Percy Grower and his Fantastic Fertiliser was an one-off by the artist who illustrated Benny Bendo – a regular in COR!! Specials and Annuals. Does anyone know the artist’s name please? 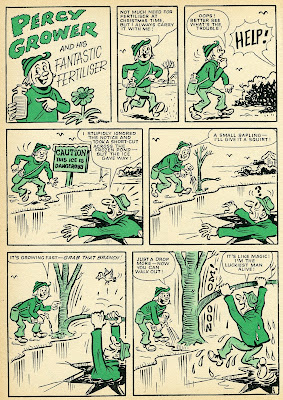 The third one-off was Moose: 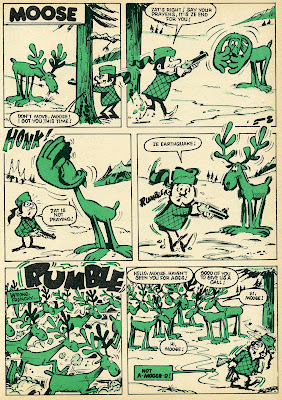 And last but not least, there was a set of Biffer, possibly illustrated by Mike Brown: 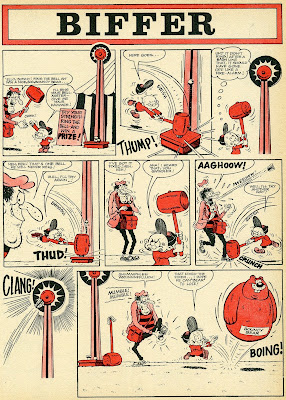 As can be seen from the summary of the contents, Crocker contributed and signed quite a large number of sets in this Annual. I can’t decide if he also drew the episode of Val’s Vanishing Cream, here is the opening page: 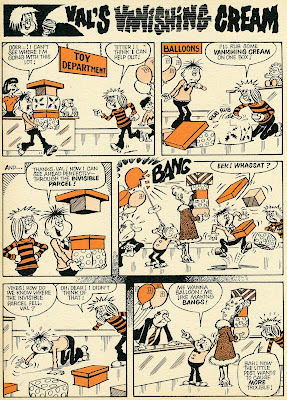 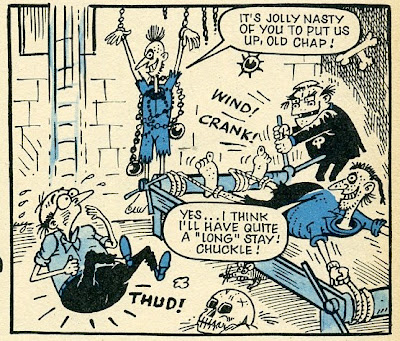 
Football Madd featured Micky Madd, a striped-shirt wearing football supporter extraordinaire who would take any steps to see a football match or win one. He was a die-hard United supporter. Cortown United that is.

Micky was a George Best fan: he collected and traded George Best cards and the footballer’s signed poster adorned his bedroom wall beside the bed (that had a goal for headposts and headboard). Incidentally, George Best himself – or at least I think it was him, made a couple of surprise appearances for reasons that had nothing to do with the script (COR!! issues dated 23rd January, 1971 and 20th February, 1971 (Nos. 34 and 38)):

Micky was extremely good at keepie-up. He was often seen accompanied by his pooch that was usually in the foreground wearing a silly or puzzled expression and occasionally conjured a thought or speech balloon.


Football Madd was one of the few features that ran from the first to the last issue of COR!! and successfully migrated to Buster where it continued for another year until September 1975. It was a black-and-white strip and had one page devoted to it. Micky Madd made as many as five front page full-colour appearances in COR!! issues dated 16th June 1973, 4th August 1973, 14th November 1973, 9th March 1974 and 13th April 1974 (Nos. 159, 166, 182, 197 and 202). I am not sure who the artist was. Peter Davidson perhaps? I even emailed Dez Skinn once to ask if he remembered who the illustrator was but he said he’d forgotten… Can anyone confirm please?
Posted by Irmantas at 6:25 AM No comments: