Here is the last batch of four artist self-portraits from MEET THE ARTISTS… series that ran in 1991 in Buster weeklies: 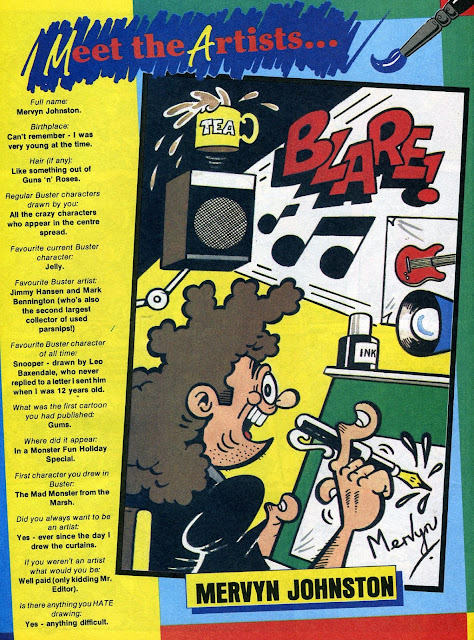 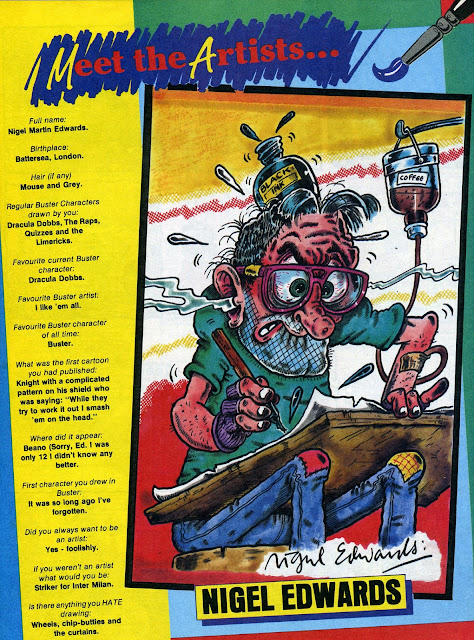 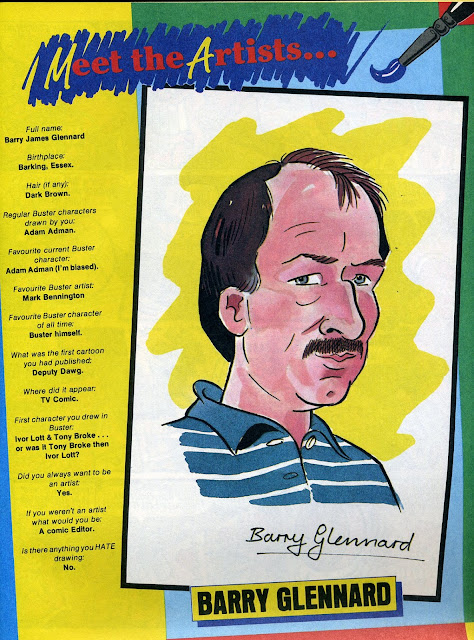 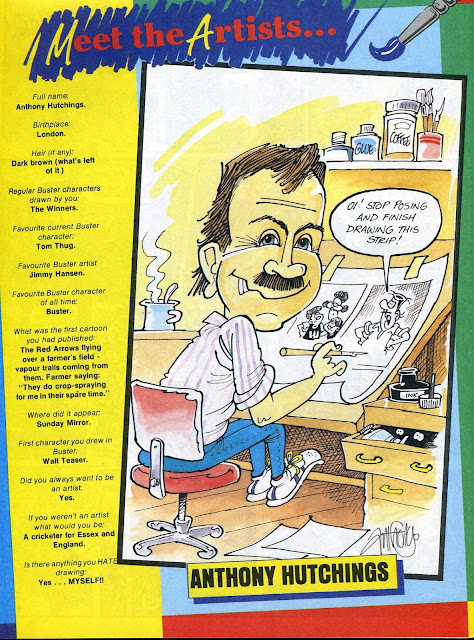 Here are four more pages of MEET THE ARTISTS... series from 1991 Buster weeklies: 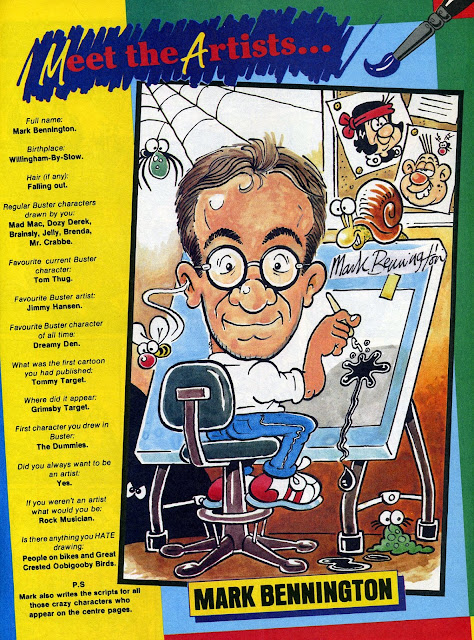 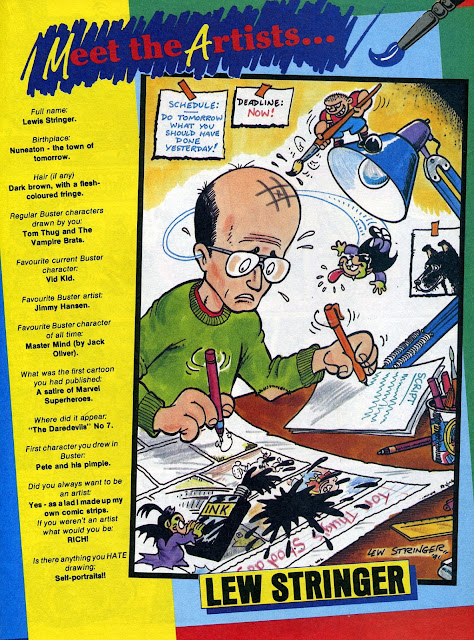 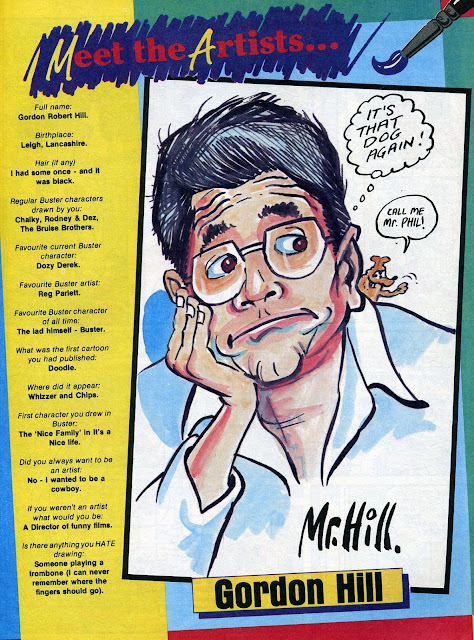 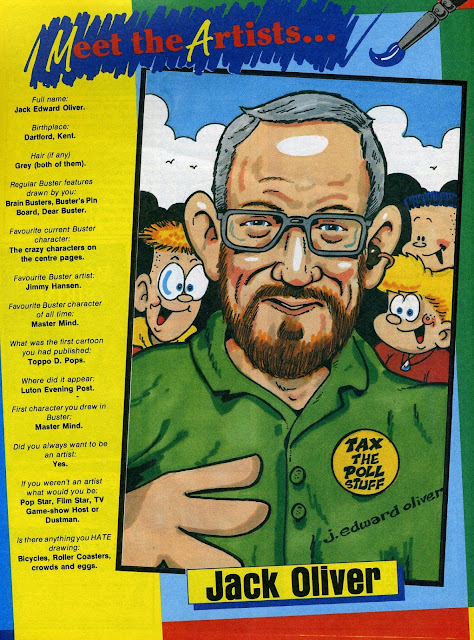 In 1990 and 1991 Buster ran a Meet the ArtistS series where the then Buster artists drew themselves and provided some details about their lives and artistic careers. To the best of my knowledge, the series covered a total of twelve artists, here are the first four. Others will follow soon: 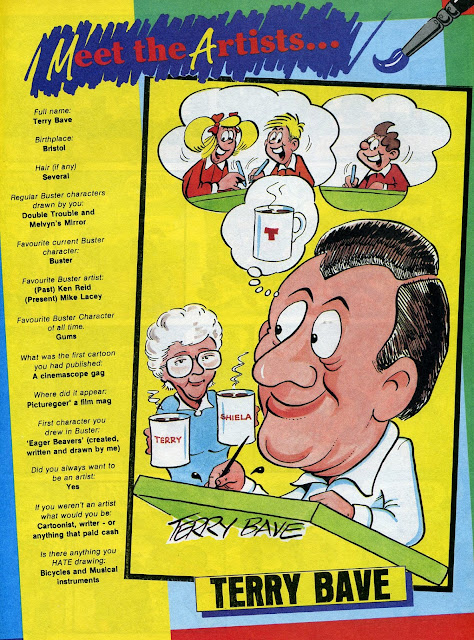 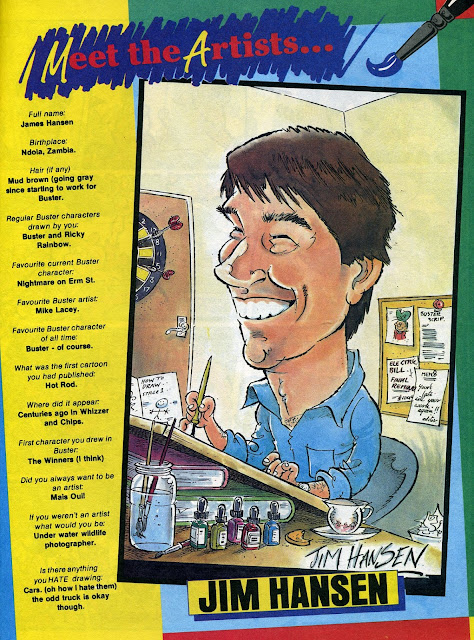 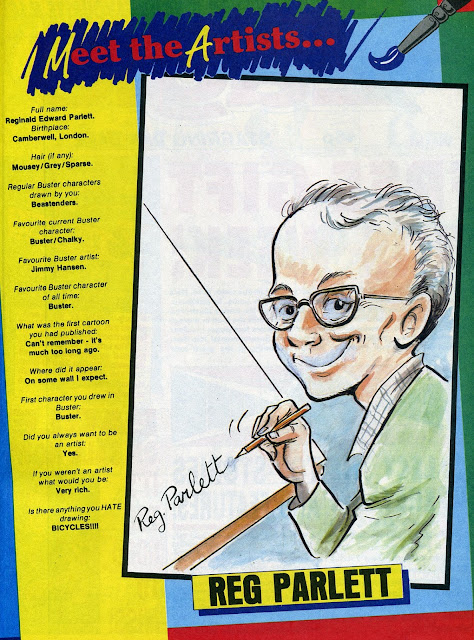 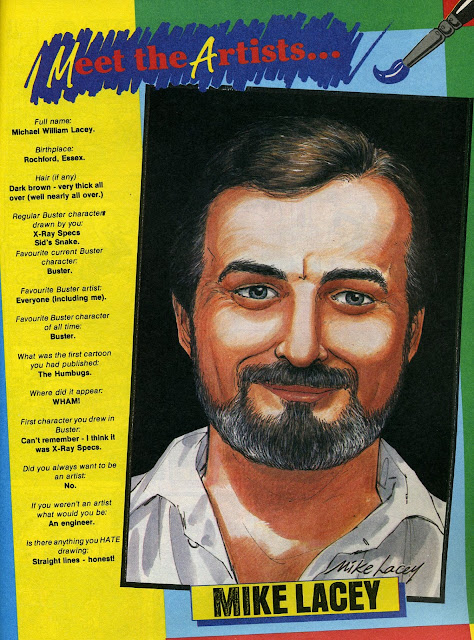 Scream Inn was a popular strip that originated in 1973 in Shiver and Shake and continued in Whoopee! after the two titles merged in 1974. Readers were invited to send their ideas suggesting who might be tough enough to spend a night in the haunted bedroom of Scream Inn and win a million pounds. The strip was illustrated by Brian Walker and one of the reader ideas was that the artist should have a go at the challenge.  Hence Brian Walker’s self-portrait in Shiver and Shake of 25th August, 1973: 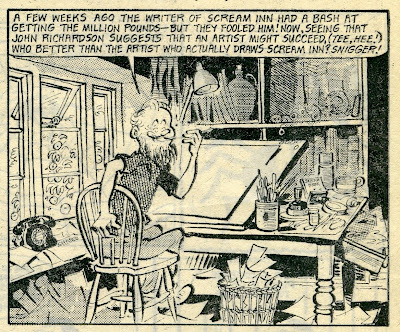 Actually, he appeared throughout the two-pager: 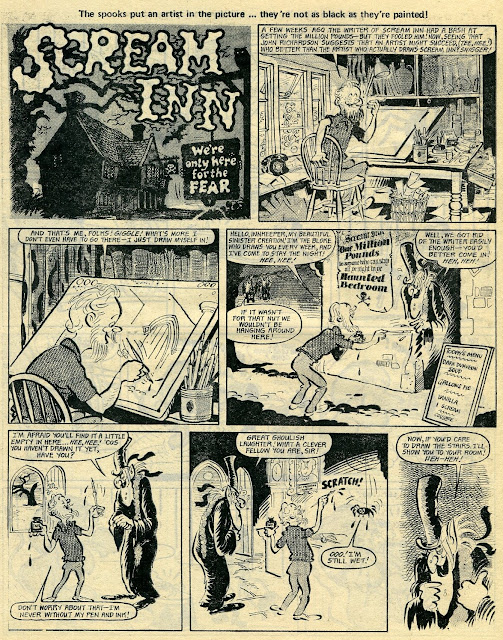 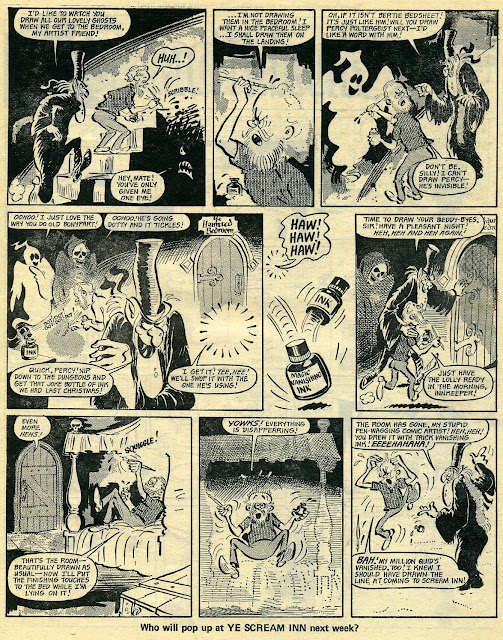 Slightly off-topic again, but some weeks earlier Scream Inn script writer (Cliff Brown) had checked-in at Scream Inn. This was in Shiver and Shake dated 7th July, 1973 (No. 18): 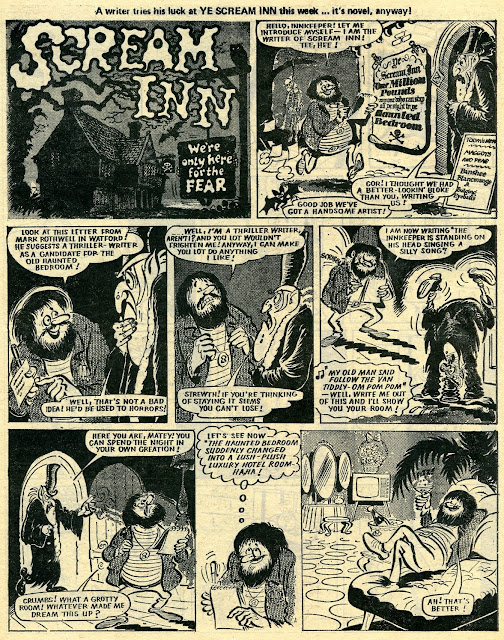 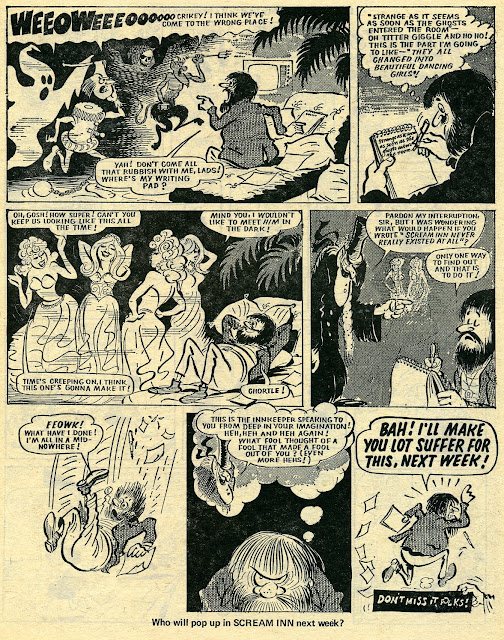 Last but not least for today, here is a self-portrait of Tom Paterson from Whizzer and Chips (thanks for the heads-up, George!). Tom drew himself twice in that issue and one of the drawings was on the front cover! 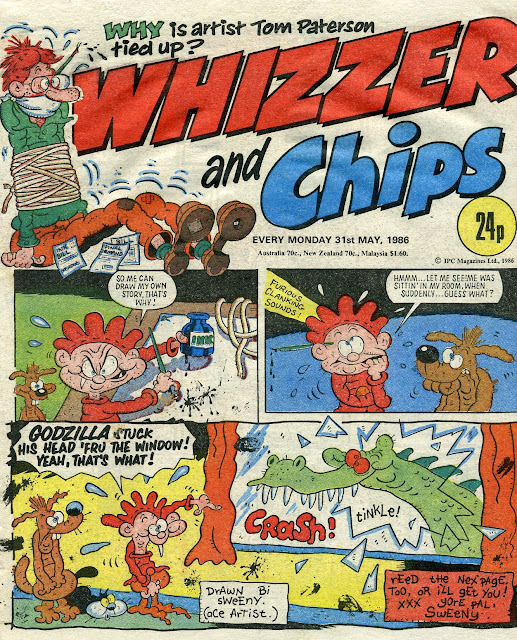 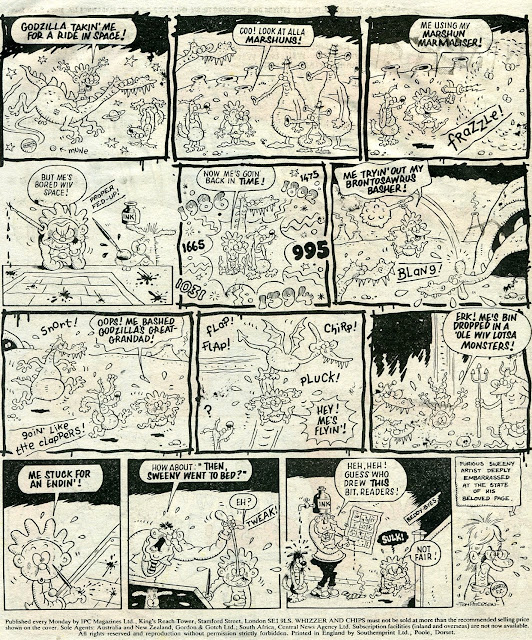 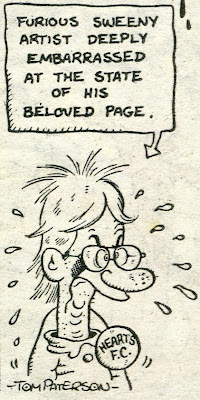 
My most recent post about the last COR!! Аnnual included a panel from The Gasworks Gang with Frank McDiarmid’s  self-portrait.  This prompted me to remember a number of examples of artists drawing themselves in British comics so I thought it would be fun to start this mini-series and create a gallery of such portraits. If you know of any examples, please, do let me know. 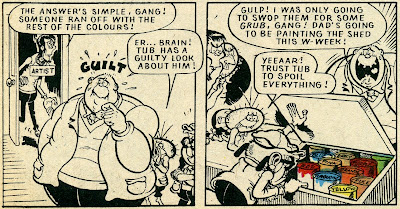 Mike Higgs drew himself in the opening panel of his famous THE CLOAK series when it premiered in the first combined issue of Pow! and Smash! (No. 137 dated September 14th, 1968):

Ken Reid’s brilliantly detailed self-portrait appeared in the episode of Dare-A-Day Davy in Pow! and Wham! No. 75 (June 22nd, 1968): 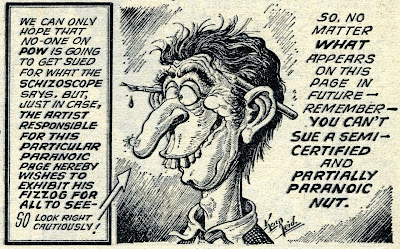 Slightly off-topic, but the episode also contained a portrait of Dare-A-Day Davy’s scriptwriter: 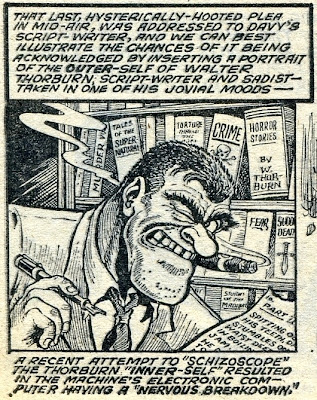 If I am not mistaken, Mr.Reid also included himself in the last panel of Faceache in Buster and Jet dated 30th December, 1972 (at least I think it’s him. I wonder who is the other guy sitting in the foreground in the left-hand side corner of the panel?):

I have more artist self-portraits lined up for the next couple of posts but would appreciate receiving more leads to make it more fun :)
Posted by Irmantas at 1:13 PM 7 comments: