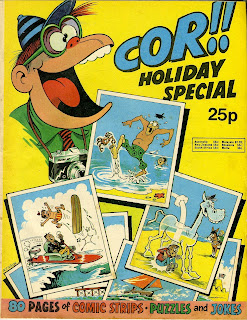 1975 COR!! Holiday Special was the first one to be published after the weekly folded. It was priced 25p and had 80 pages. It was also the last COR!! holiday special to have Gus Gorilla on the front cover.

Here is the list of strips and features (here and further on the strips that had never appeared in COR!! weeklies will be marked in red):

There were two one-off strips in the special:

Barny Owl by Terry Bave was about “the wisest owl around” that helped other animals with their problems. 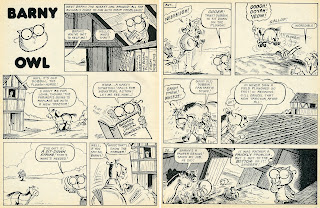 Opportunity Knox was about an optimistic guy who was always hoping for better things. Here’s a taste: 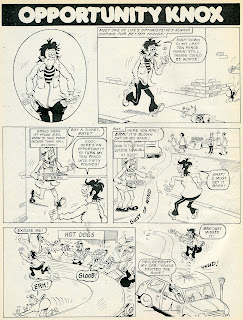 The magazine showed signs of IPC relaxing their policy of artists’ anonymity – Robert Nixon, Tom Paterson, Frank McDiarmid and Terry Bave signed some of their sets. Nixon’s signature was on the front cover illustration.

COR!! ANNUALS AND HOLIDAY SPECIALS AFTER THE WEEKLY

IPC carried on publishing COR!! annuals and holiday specials long after the weekly folded: the last special came out in the summer of 1983 and the last annual – in the end of 1985.  As was the case with many IPC annuals and specials, COR!! publications were chock-full of reprints and sets drawn by artists other than the regular ones. Some reprints were kept in their original format, while some had their panels resized and given the odd full-colour facelift. As a general pattern, one-page sets from the weeklies were turned into two-pagers while two-pagers became four-pagers.

The books and the specials are less fun to review but since this blog attempts to be a comprehensive resource for COR!! enthusiasts, I will go through all of them. I intend to show front covers and provide details about contents, price and the number of pages. One-off strips that didn’t appear in the weeklies will be covered under the headline of the respective annual or special, while strips that didn’t appear in the weeklies but were printed in more than one annual or special will receive a dedicated blogpost later on. I will identify reprints and new episodes as such where I can.


In his book A VERY FUNNY BUSINESS Leo Baxendale recalls redrawing Little Plum and Minnie the Minx from the BEANO as Barmy Army and Bad Penny in WHAM! and SMASH! However, he forgot to mention that he also redrew at least one set of The Bash Street Kids as The Tiddlers. Check out the scans below. The episode of The Bash Street Kids is from the BEANO Book 1960 and The Tiddlers is from WHAM! No. 64 (4th September, 1965). There is nothing in The Tiddlers set to suggest that Mr. Baxendale was over-exhausted or stressed out from working under a tight time schedule: the artwork is excellent and more detailed than in the original episode of the Bash Street Kids. Quite obviously the artist himself was pleased with the quality of the work because his signature appears on both pages of the set.

It is interesting to note that the Beatles theme was incorporated in two of Leo Baxendale’s remakes: the billboard poster in the set from WHAM! No. 64 below featured the whole band and Ringo Starr appeared in panel 5 of the Barmy Army set a week later (WHAM! No. 65) for no reason at all (see my previous post here). 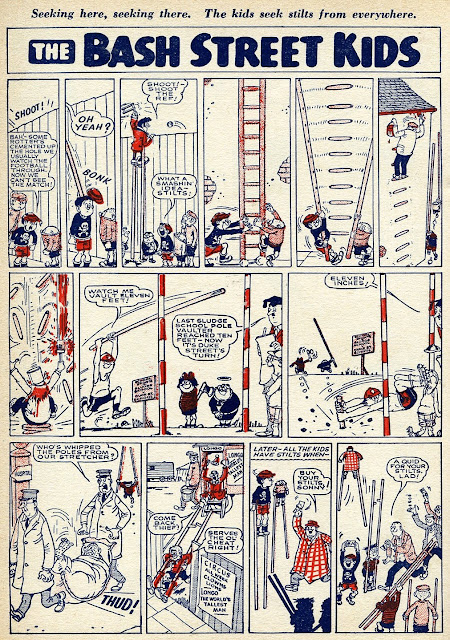 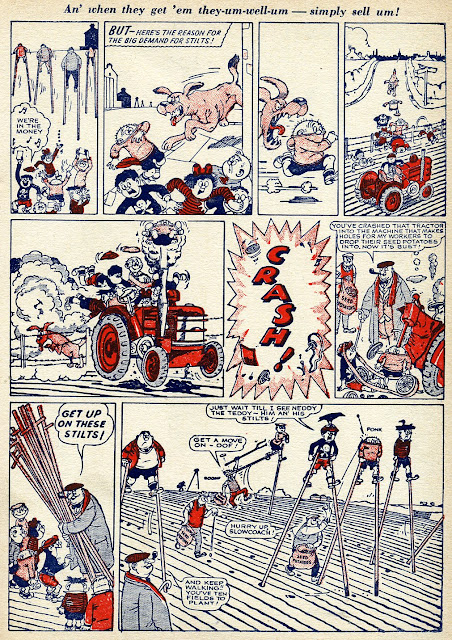 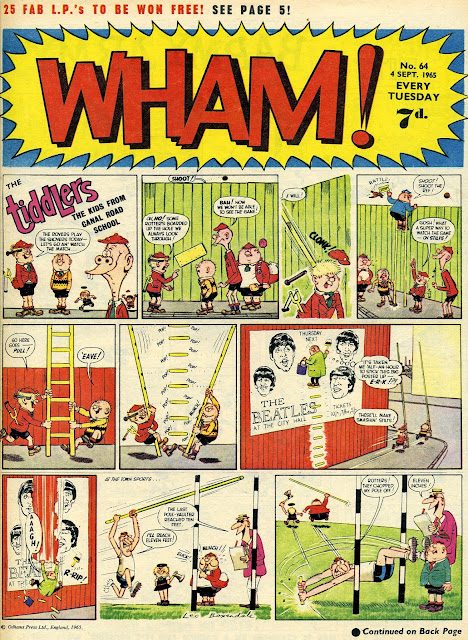 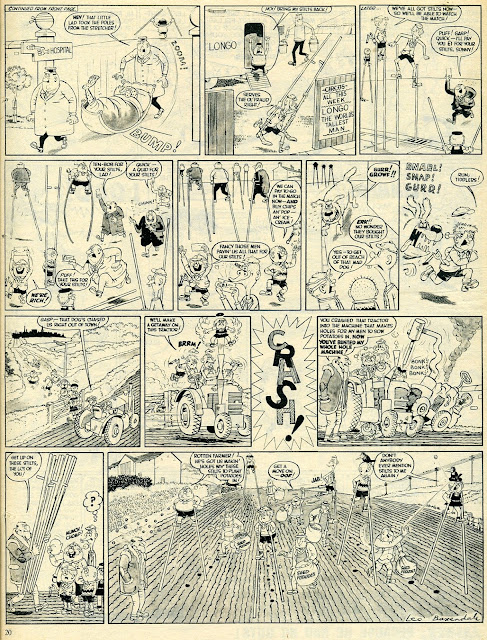 
Some time ago I said I was going to try and find more examples of Leo Baxendale’s remakes of his own Little Plum sets from the BEANO into General Nitt and His Barmy Army sets in WHAM! that he mentions in the book A VERY FUNNY BUSINESS.

Putting my findings into a time sequence, here is the first instance in WHAM! that I managed to spot. It was a rather cautious one with only a couple of ‘incriminating’ panels while the stories themselves have little in common (I prefer the one in WHAM!). The Little Plum set is from the BEANO Book 1960 and Barmy Army is from WHAM! No. 61 (14th August, 1965). It is interesting to note that Leo Baxendale's signature is absent in the set although he is said to have singed most of his ODHAMS work. 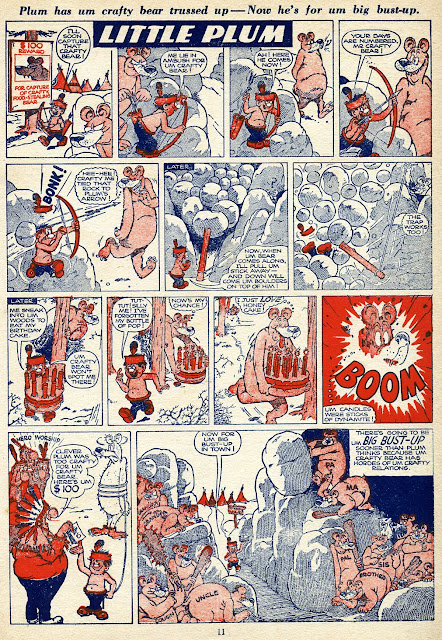 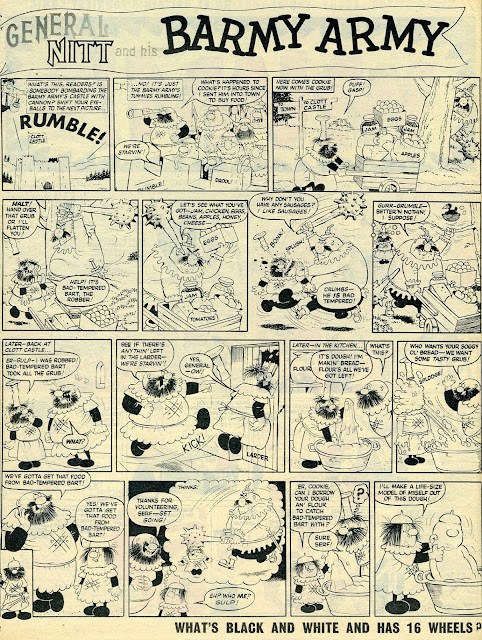 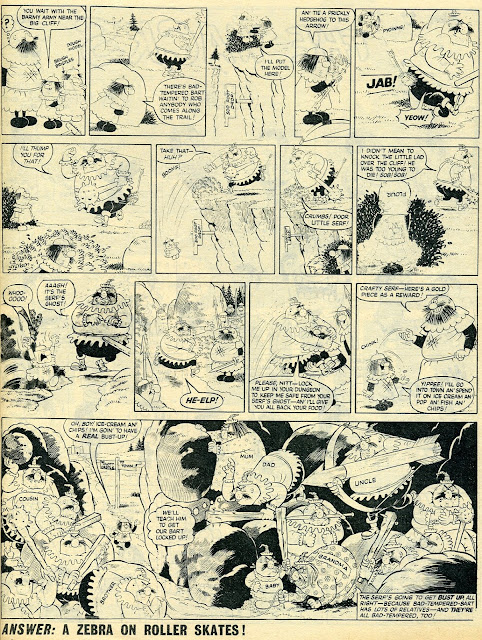 The Barmy Army set in WHAM! No. 62 was by another artist so it is of no interest to us in the context of this blogpost. The set in WHAM! No. 63 was the scandalous ‘carbon copy’ remake of the Bears v. Injuns football match set that Mr. Baxendale mentions in his book (you can view it here). In WHAM! No. 64 Barmy Army was again illustrated by another artist. Fast forward to WHAM! No. 65 (11th September, 1965) and, lo and behold, there is another remake! The original Little Plum one-page set was printed in the BEANO No. 936 (26th June, 1960). If I had to choose, the Barmy Army set would again be my favourite: 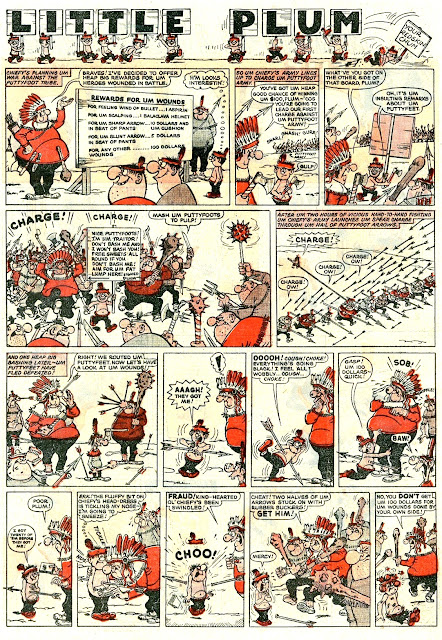 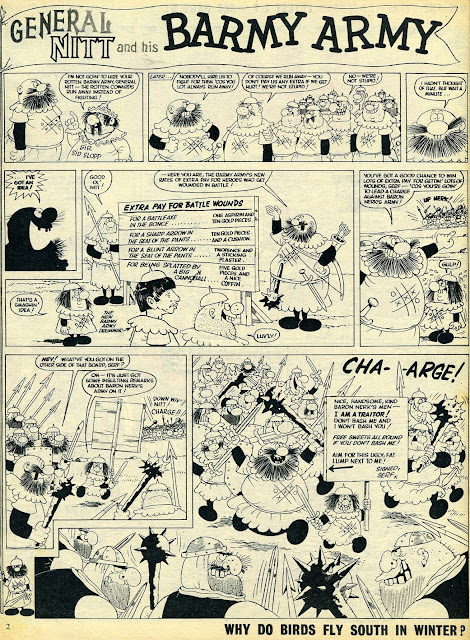 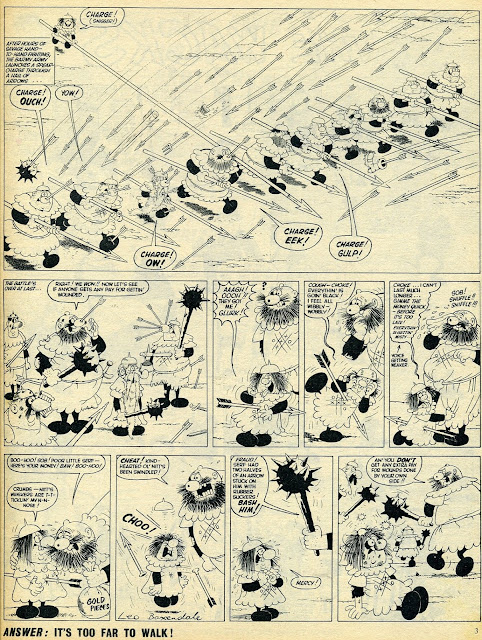 In the meantime the last blogpost about recycled strips inspired me to do some more detective work. Those of you who have been following my football blogposts in June may remember the post about a strange case of Leo Baxendale redrawing an episode of his Little Plum from the BEANO as General Nitt and His Barmy Army in WHAM! You can refresh your memory by revisiting the blogpost here. There was also a small discussion on Comics UK Forum about the possible mechanism used by Mr. Baxendale in producing the near carbon copy of his original artwork with a slightly different finishing. You can read the discussion here.

In his book A VERY FUNNY BUSINESS Leo Baxendale openly confesses he was so exhausted working for WHAM! that he did a “loony thing” of picking out the very best Minnie the Minx and Little Plum sets from old BEANO comics and redrawing them as Bad Penny and Barmy Army sets. He also recalls that as soon as these sets appeared in WHAM! and SMASH! “…D.C.Thomson erupted and spouted molten lava everywhere”.

Let us look at the ‘evidence’: the Barmy Army football set appeared in WHAM! No. 63 (28th August, 1965) and was so close to the original Little Plum set from the BEANO No. 929 (7th May, 1960) that it was indeed impossible for D.C.Thomson not to “lose their cool”. After Mr. Baxendale witnessed the wrath of his former employer, it is unlikely he ever repeated the ‘carbon copy’ exercise (although this remains to be checked) but the temptation to re-use some of his old material must have been too strong to be resisted. Some panels of this Bad Penny set in SMASH! No. 9 (2nd April, 1966) are suspiciously similar to those of Minnie the Minx in the BEANO No. 943 (13th August, 1960). Was this set of Bad Penny the one that Mr. Baxendale referred to in his book or were there others too? I will see what else I can find… 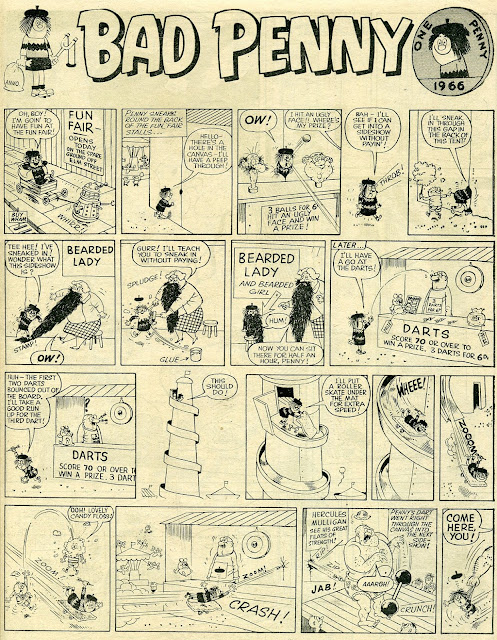 WHERE DID THE CASH GO???

It turns out that Frank McDiarmid was not only instructed to ghost Mr. Reid’s style but also to use a few of the original Dare-A-Day Davy scripts and layouts from POW! There is nothing sensational about recycling old scripts, this happened quite often in comics. There is also no sensation in the fact that publishers of VALIANT used scripts created for a different company: IPC devoured Odhams in the late 60s so technically the publishers of VALIANT owned rights to the material published in POW! The big question here is who pocketed the fivers that were allegedly sent to the lucky readers of VALIANT?.. :o 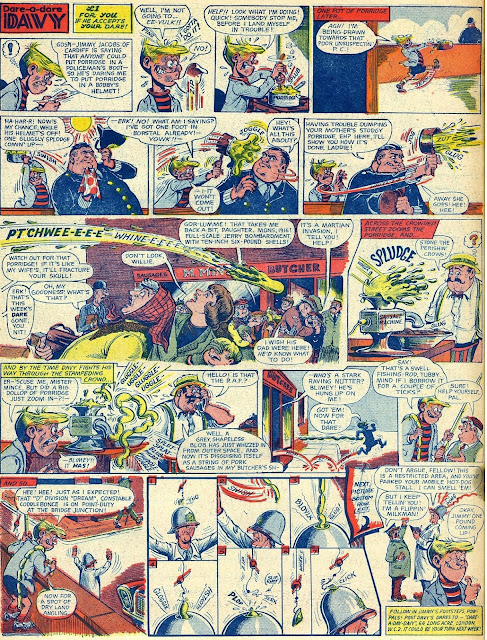 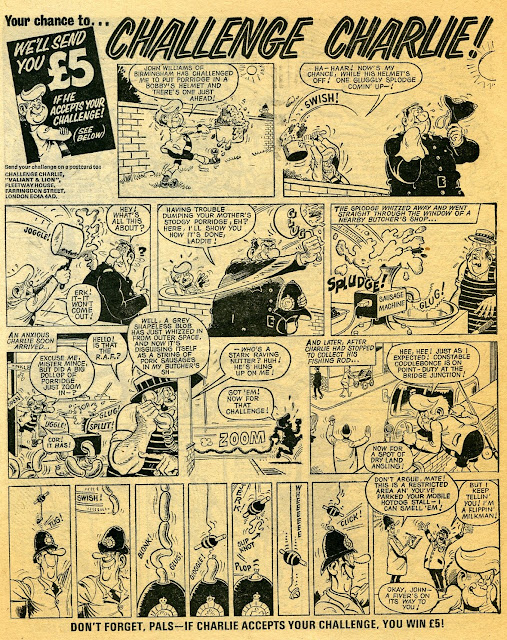 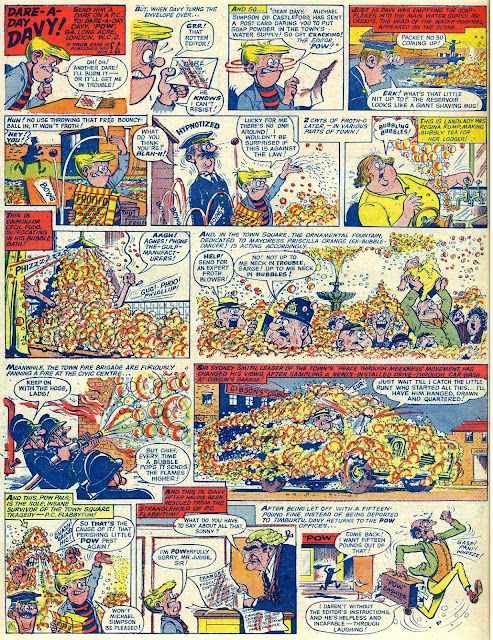 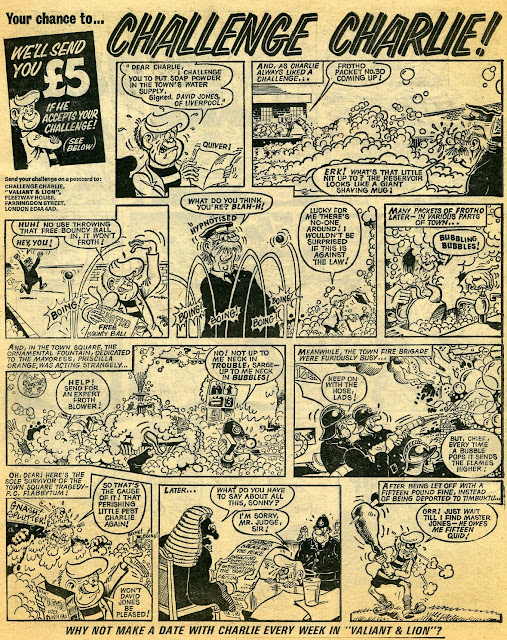 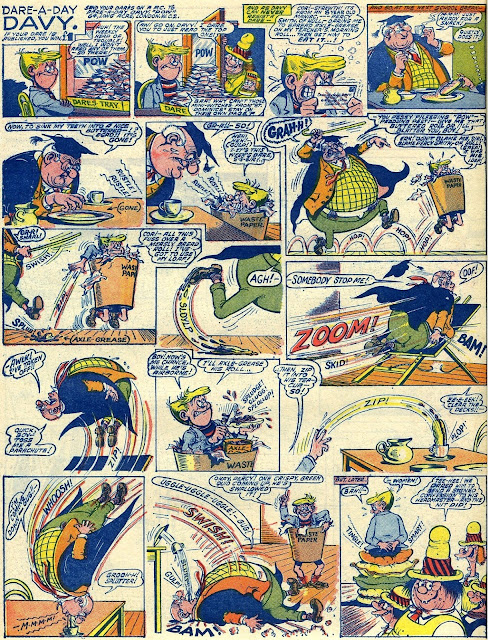 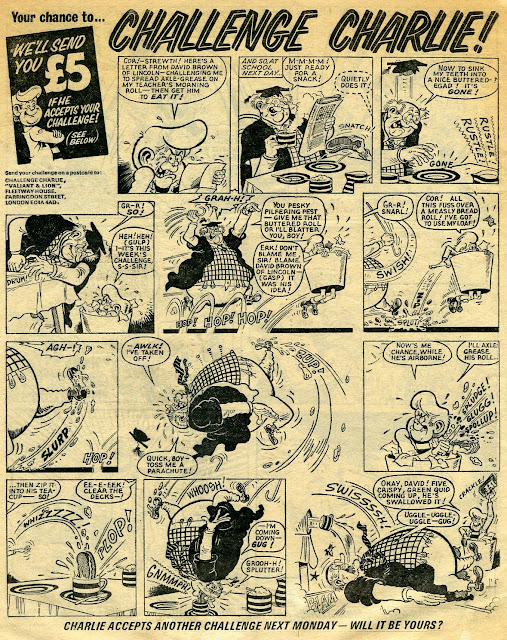 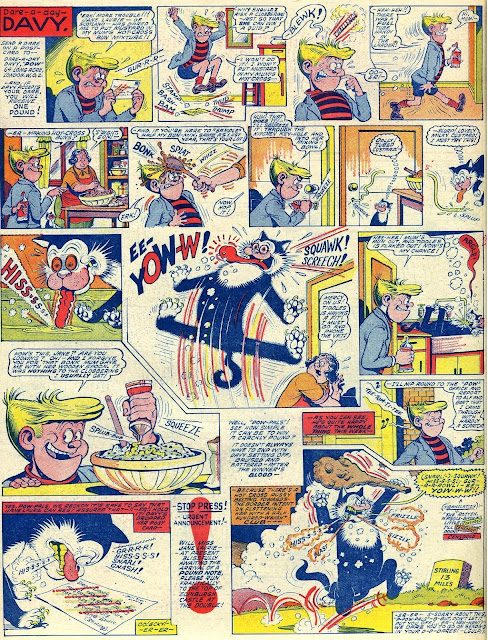 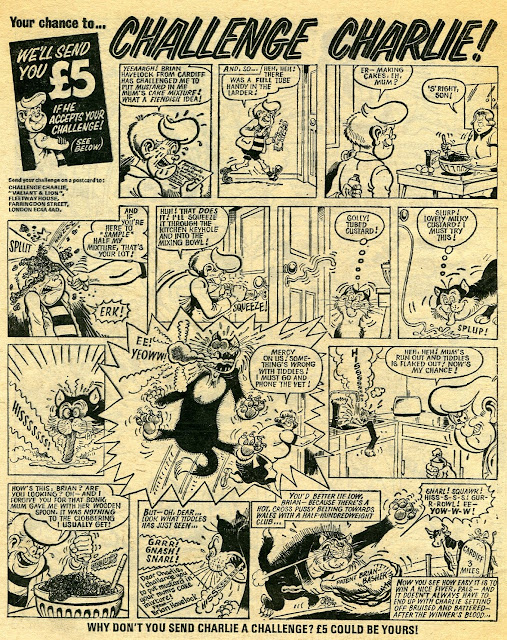 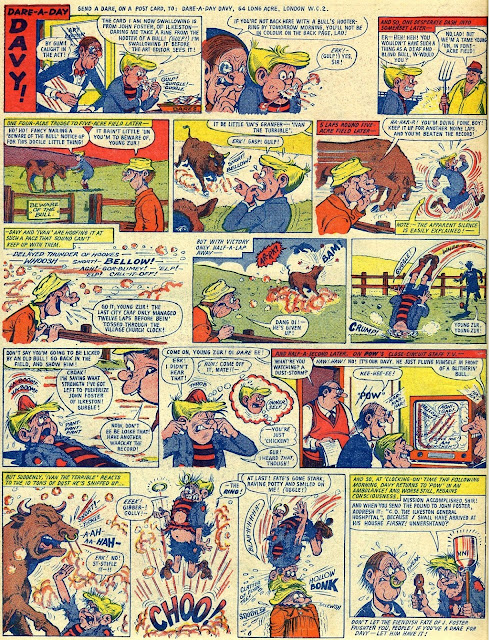 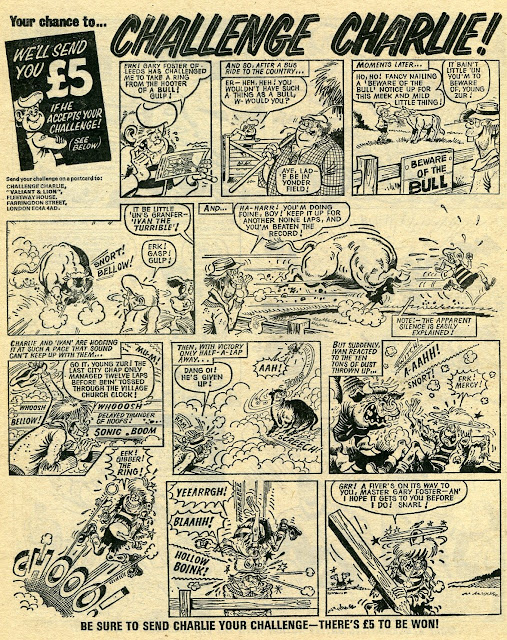 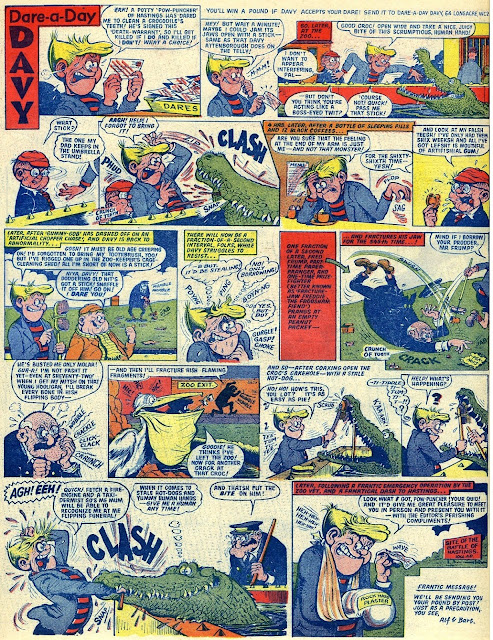 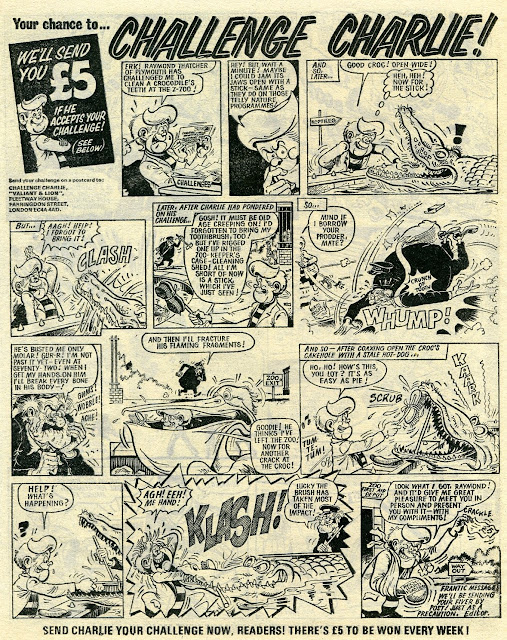