Terror TV was 'the channel of chills’ run by the gloomy skeleton Magnus Murkysome (named after TV presenter Magnus Magnusson, who presented the BBC's Mastermind – thanks to Raven for this piece of info!) and his team of telly fiends. The channel broadcast from an eerie castle which sat on hilltop in the middle of a normal suburban neighbourhood.

The arrival of Terror TV was celebrated by putting the strip on the cover for two consecutive weeks and moving Gums inside for a while. Here is the first episode as it appeared in MONSTER FUN COMIC issue No. 50: 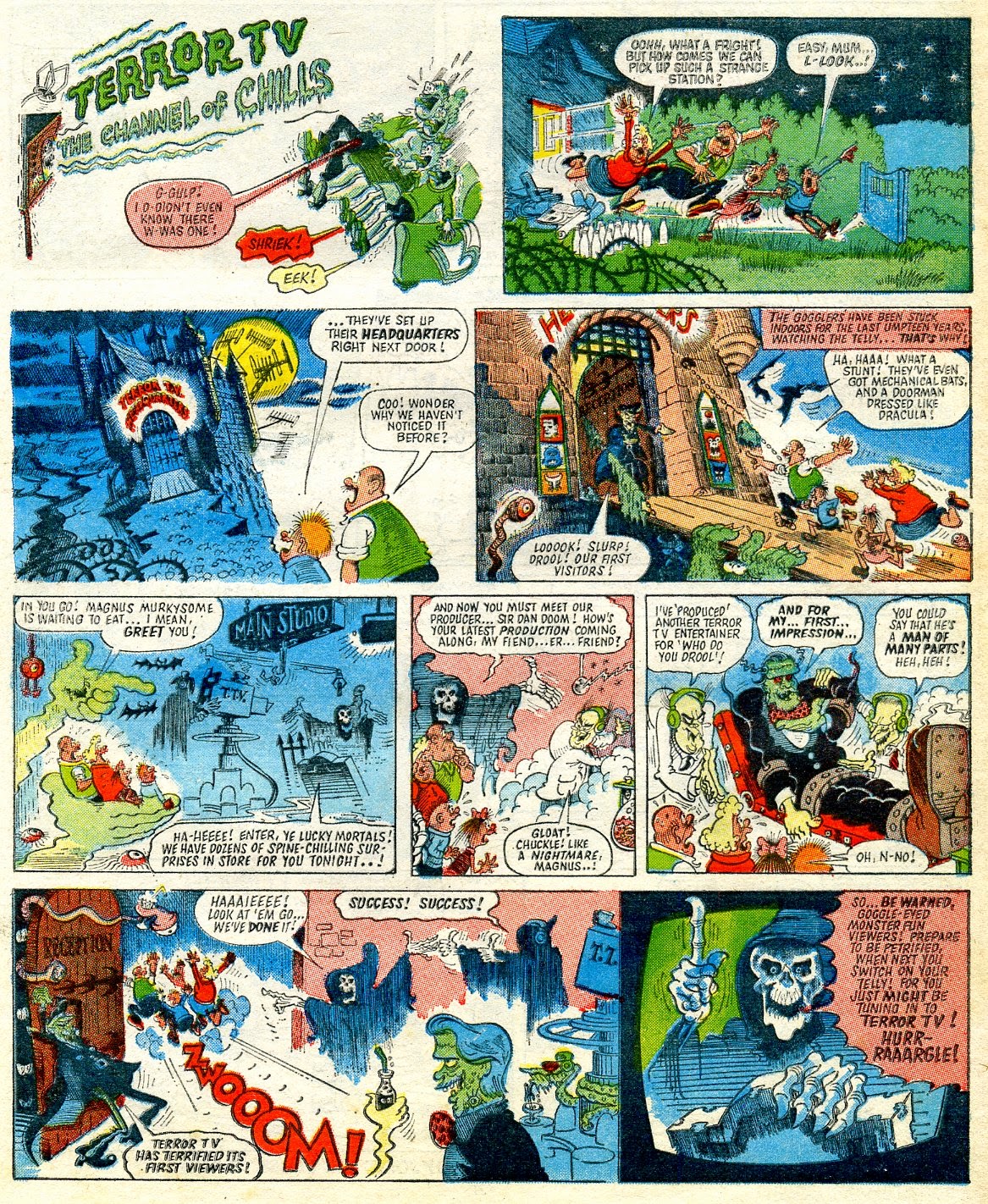 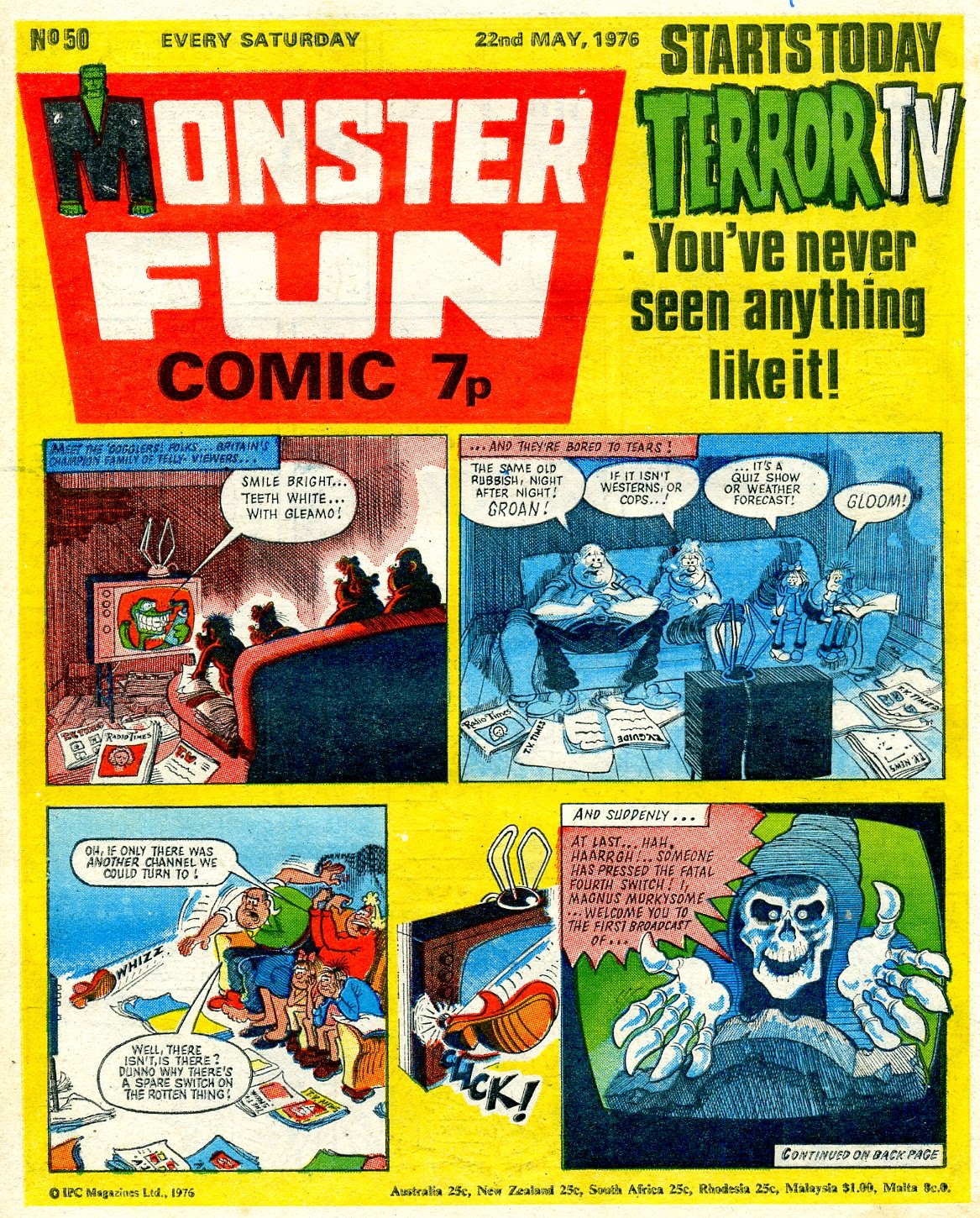 It is common knowledge that the rise of television was one of the factors which affected comics industry and the last frame of the first episode got me thinking perhaps scaring readers away from their TVs so that they had more time to read comics was one of the script-writer’s ideas...

The strip about the TV channel with a mission to terrify its viewers offered weekly monstrous parodies of popular TV shows. Initially it ‘monstrified’ generic shows without naming them specifically, e.g. a quiz show, a programme for gardeners, a spooky cooky programme, etc. Terror TV was the darkest strip in MFC and I suspect some of those early episodes might have looked really chilling to the young reader: 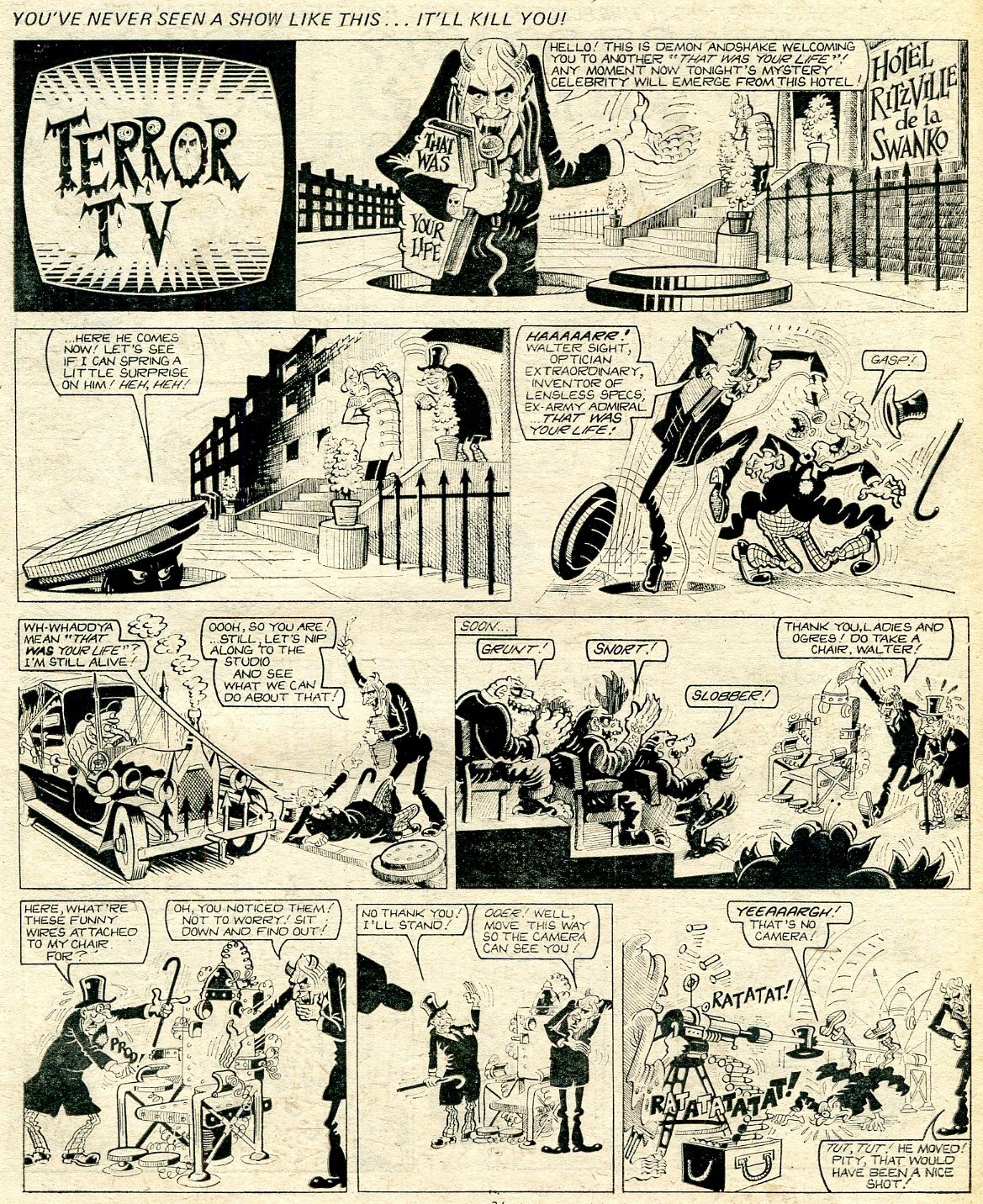 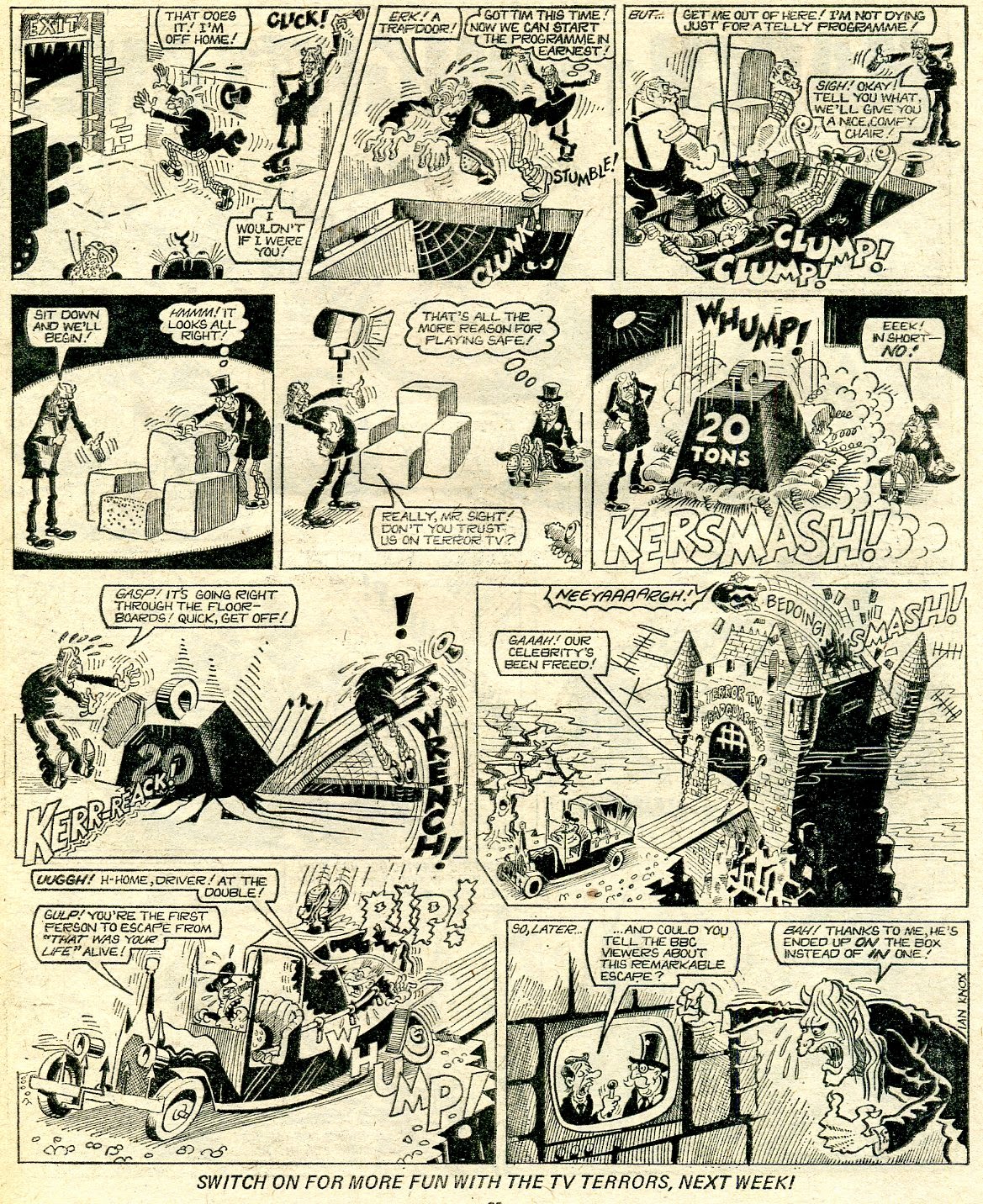 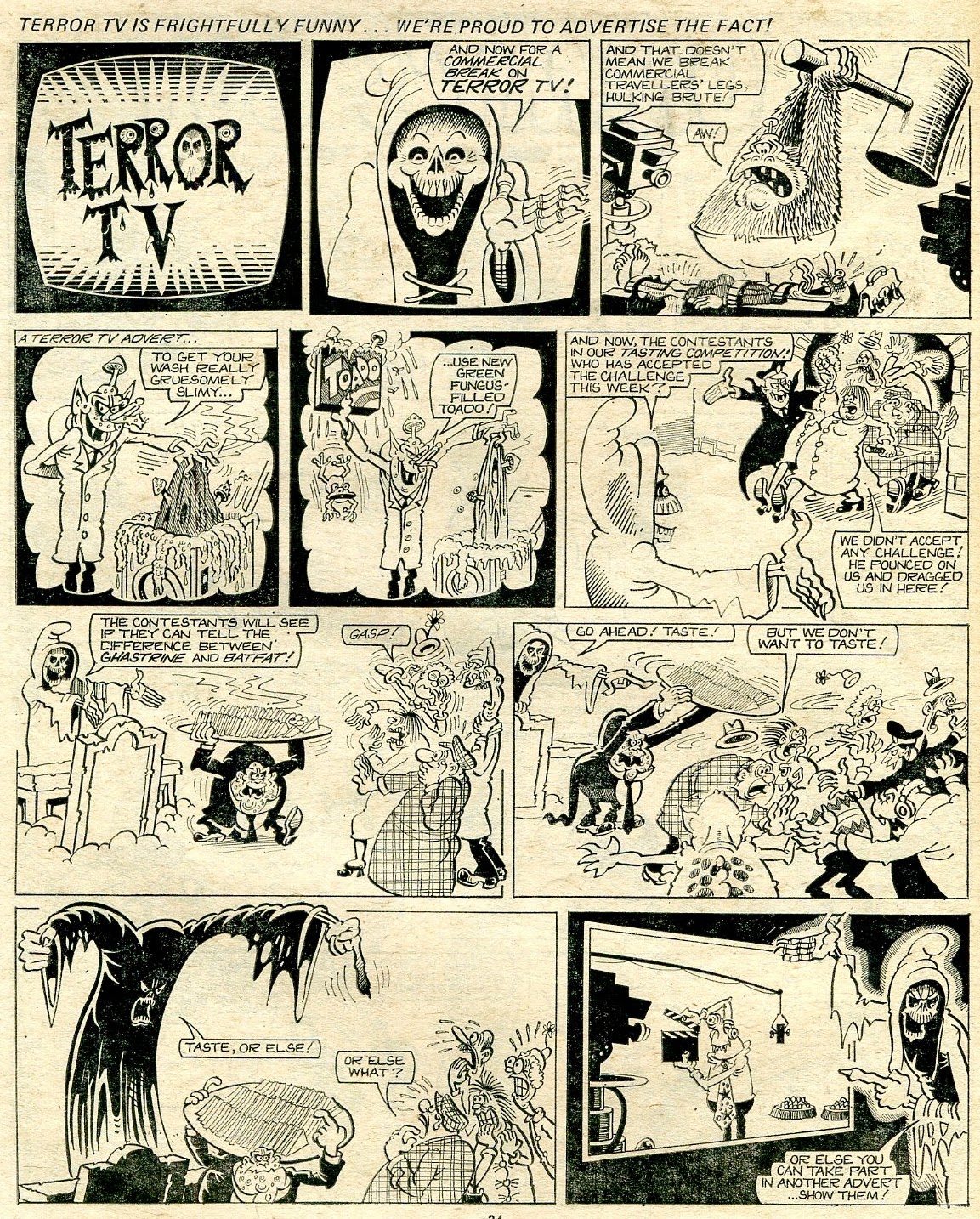 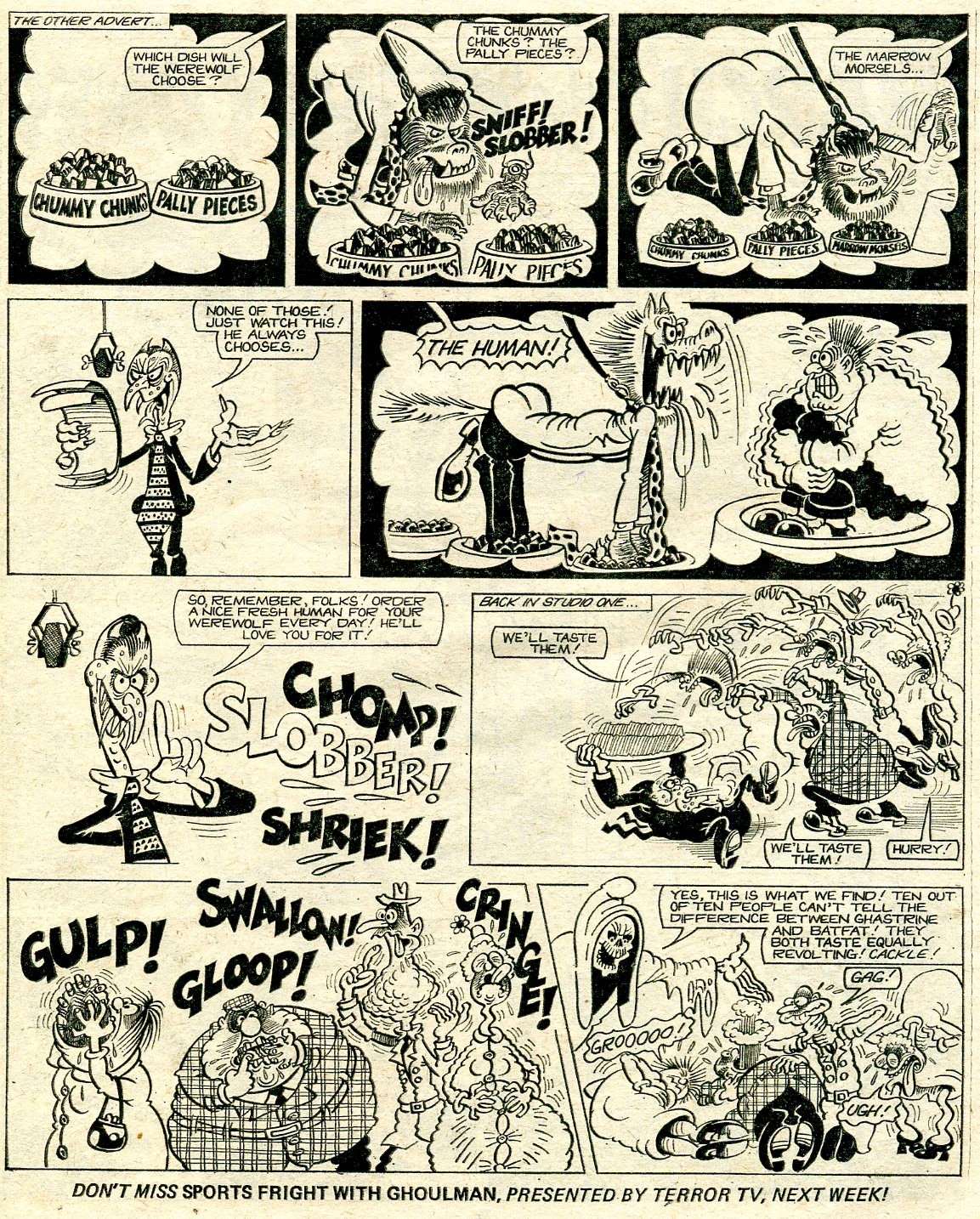 Terror TV also lampooned real TV shows. I managed to identify a few but not all of them because I didn’t watch British TV in the seventies. Below is the complete list of Terror TV shows from the MFC run of the strip, some with their real-life equivalents noted in red. UPDATE: Raven and Uncle Jesse have identified quite a few more for me, they are marked in blue: 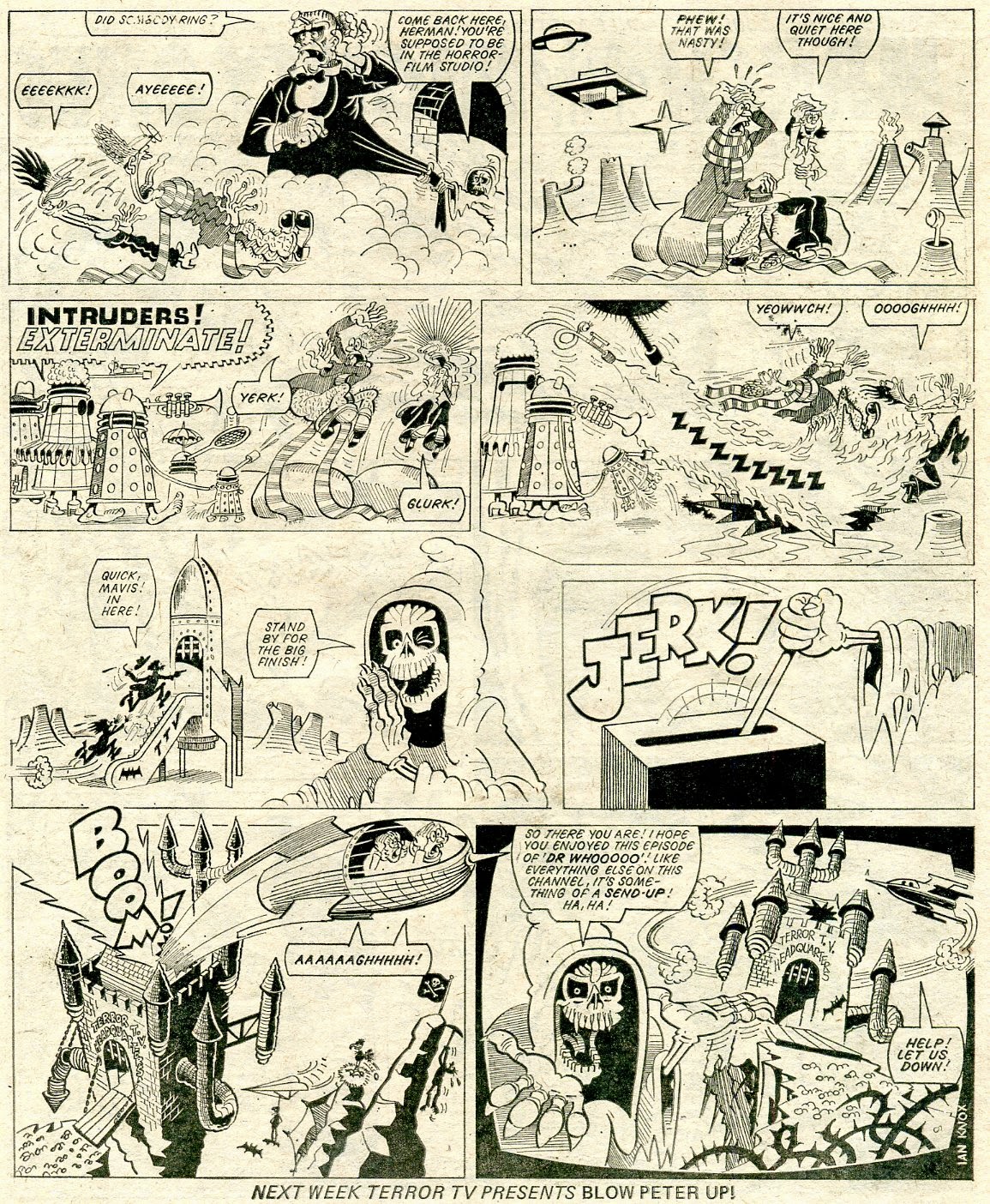 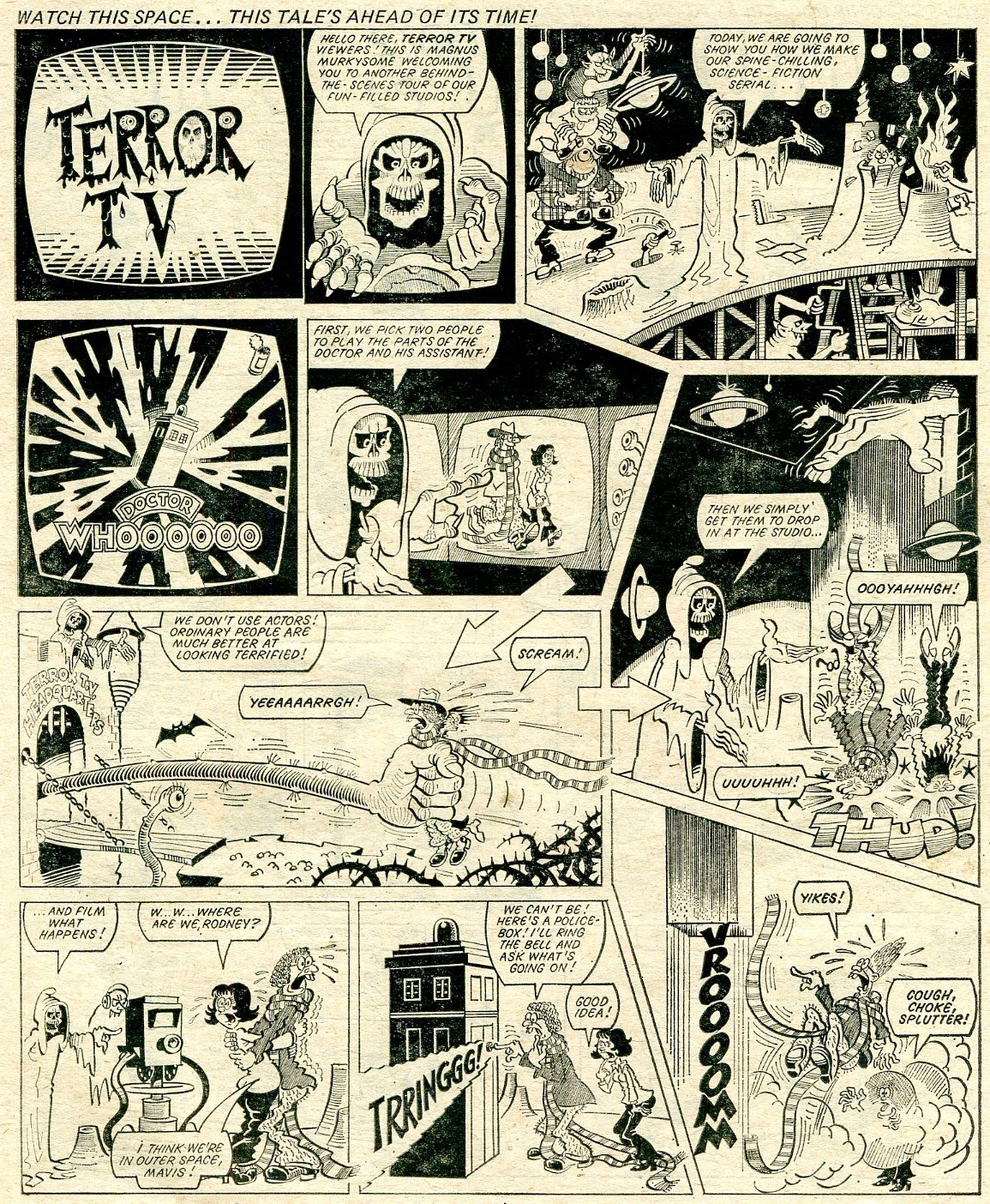 * Blow Peter Up (Blue Peter - long-running BBC children's magazine series; started in the late 1950s and still going)
* A Day at the Races
* The Ghoulies (The Goodies). Here is the episode in full: 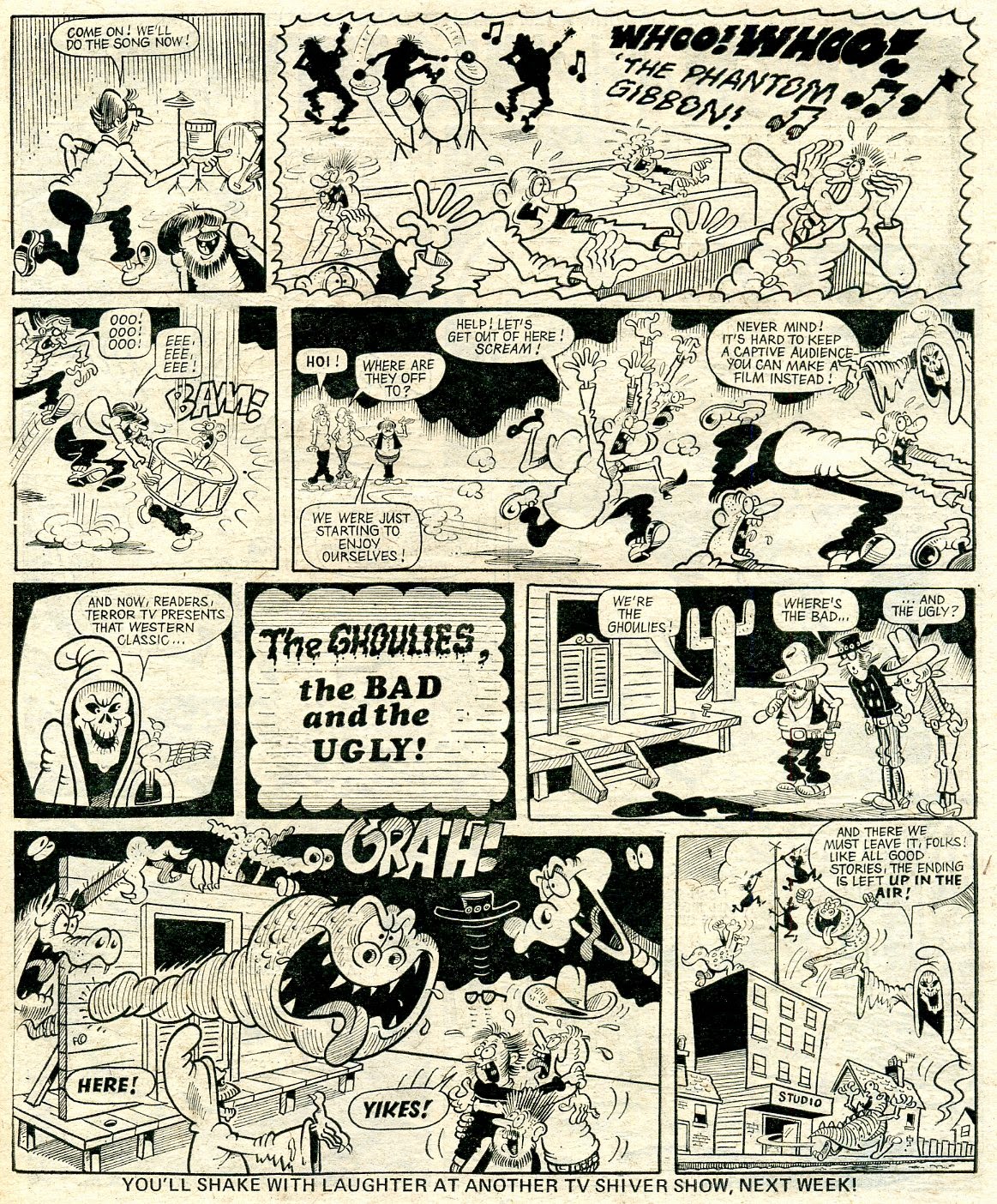 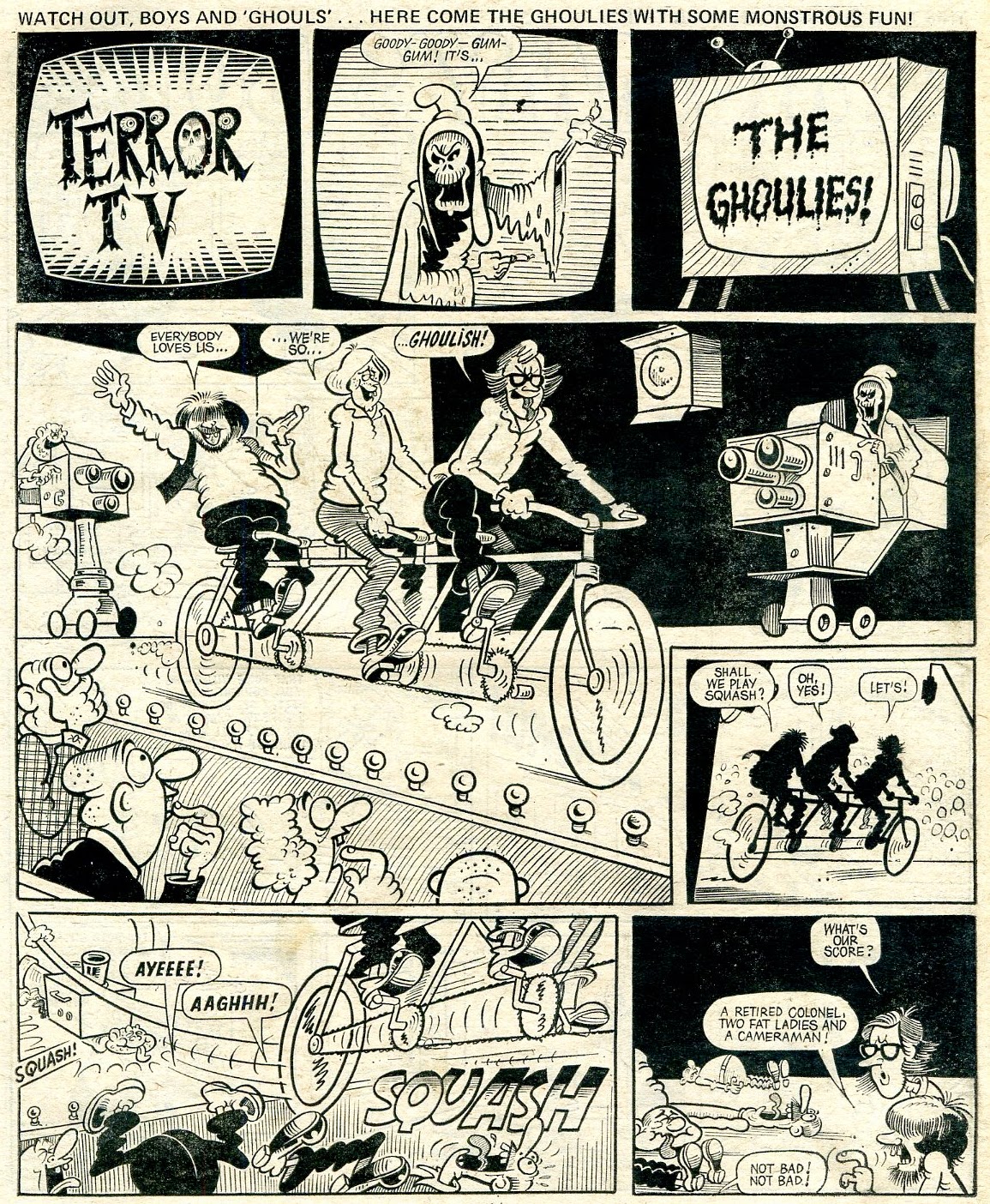 Can you identify the few remaining shows?

The two-pager ran in MFC issues 50 – 73 and didn’t miss a single week. Initially the illustrator was Ian Knox who signed or initialled the majority of his sets. Barrie Appleby took over starting from issue 67 and continued to the end of the series in MFC. His version of Terror TV was more cartoony and certainly not as depressing and frightening as Ian Knox’s. The strip received a pull-out poster in MFC No. 60 (31st July, 1976). After MONSTER FUN COMIC folded, Terror TV was transferred to the combined BUSTER AND MONSTER FUN where it shrunk to a single page and was drawn by Barrie Appleby. The BUSTER run of Terror TV expired on 18th February 1978. 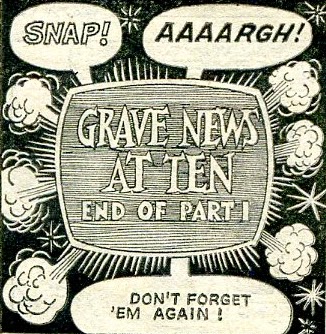 Terror TV completes the series of reviews of the strips ‘proper’ which appeared in MONSTER FUN COMIC. I am not done with the weeklies yet: there are quite a few interesting things remaining, including the famous Badtime Bedtime Books, before I move on to MONSTER FUN Holiday Specials and Annuals.
Posted by Irmantas at 7:02 AM 7 comments:

Freaky Farm was a tale about a farm with an evil reputation run by the froight’ning Freaky Farmer – a monstrous humanoid who spoke with the West Country accent and had a hat instead of a head. Everything on Freaky Farm was predisposed against ‘pesky visitors’ and worked to scare them away and off the farm. Everything includes literally everything – from the Freaky Farmer: 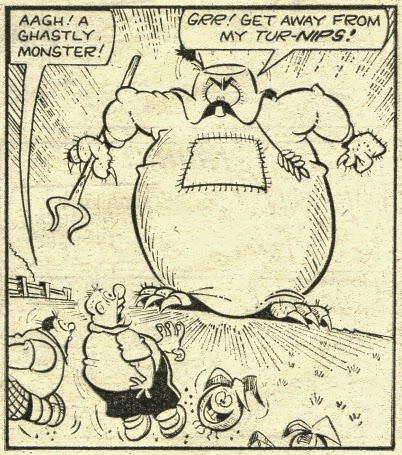 … to farm animals, poultry and crops: 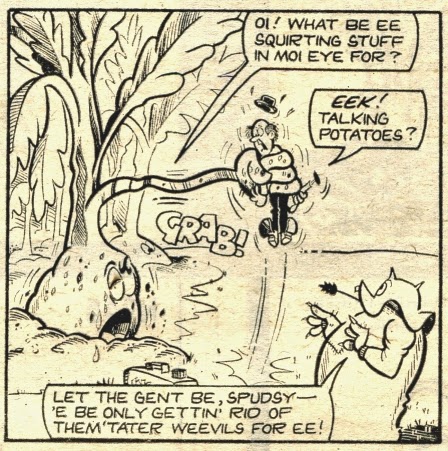 … to agricultural machinery and appliances: 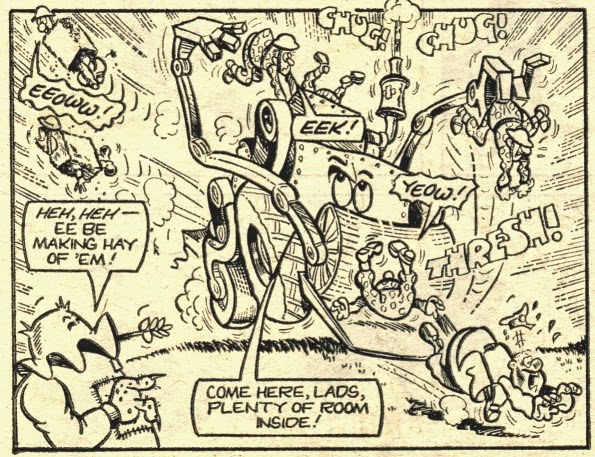 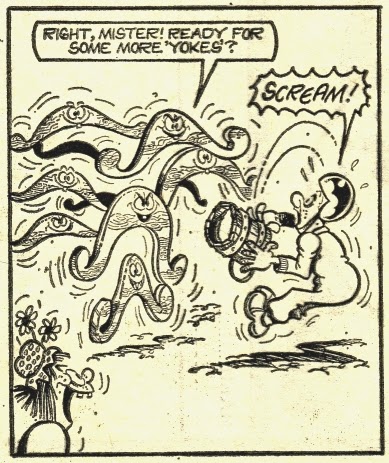 … to buildings and structures, such as the freaky farmhouse, the barn and even the rocks of the stone wall: 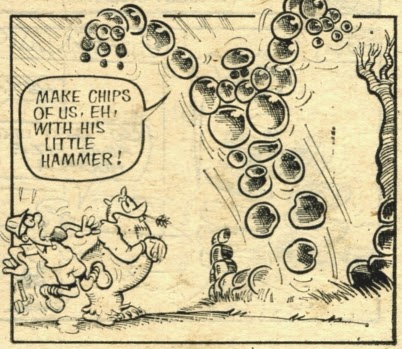 … to wildlife, trees and plants growing on the farm: 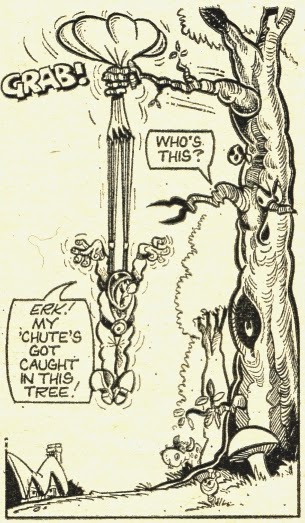 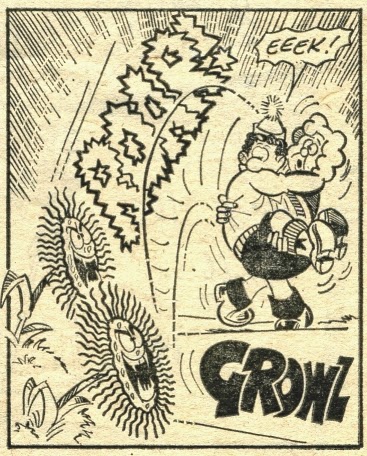 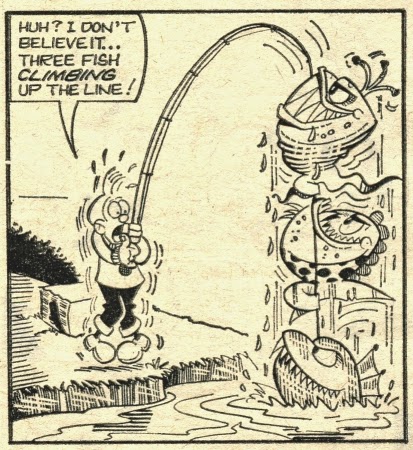 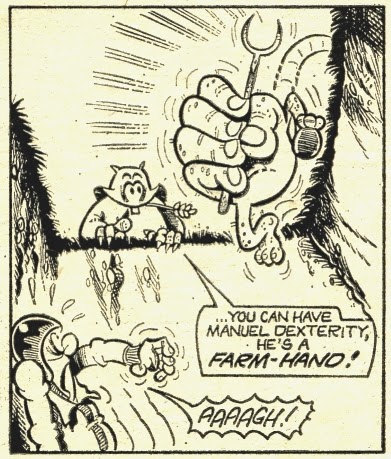 … and of course the scarecrow: 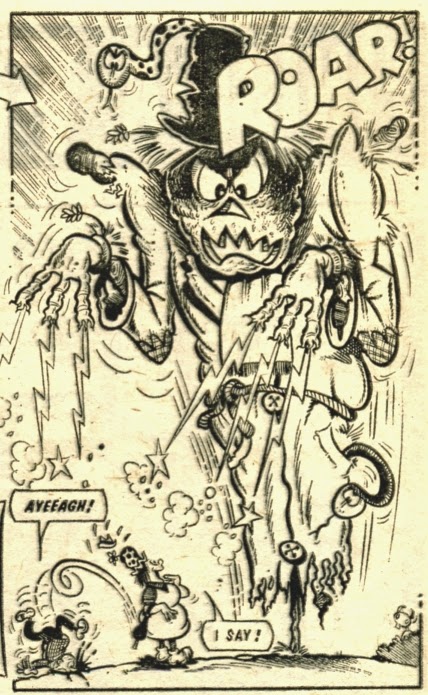 Every week a new ignorant trespasser or adventurer would turn up at the unwelcoming Freaky Farm and the farm community took a concerted effort to make him/her/it/them run away in shock and terror. Here are two nice representative examples: 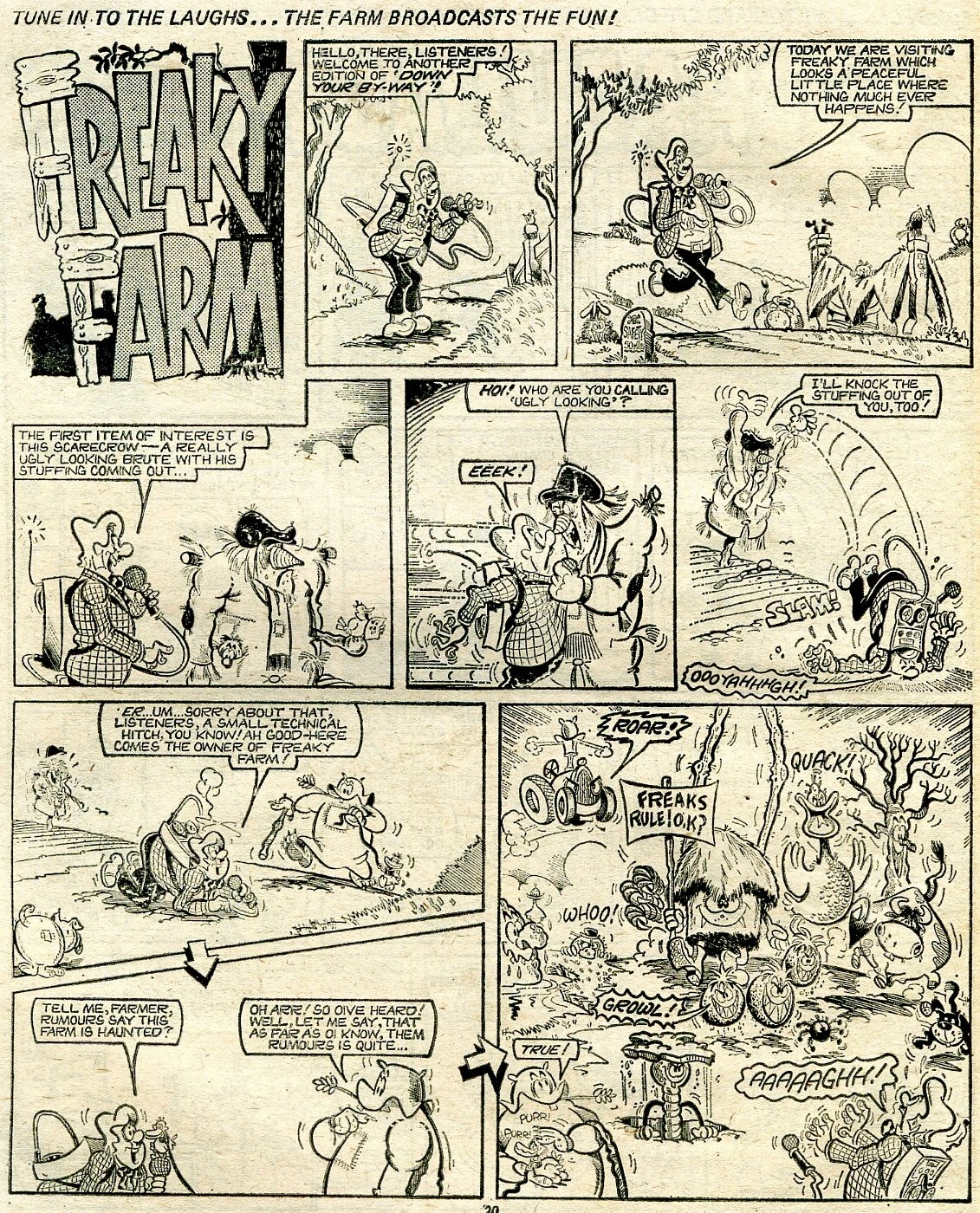 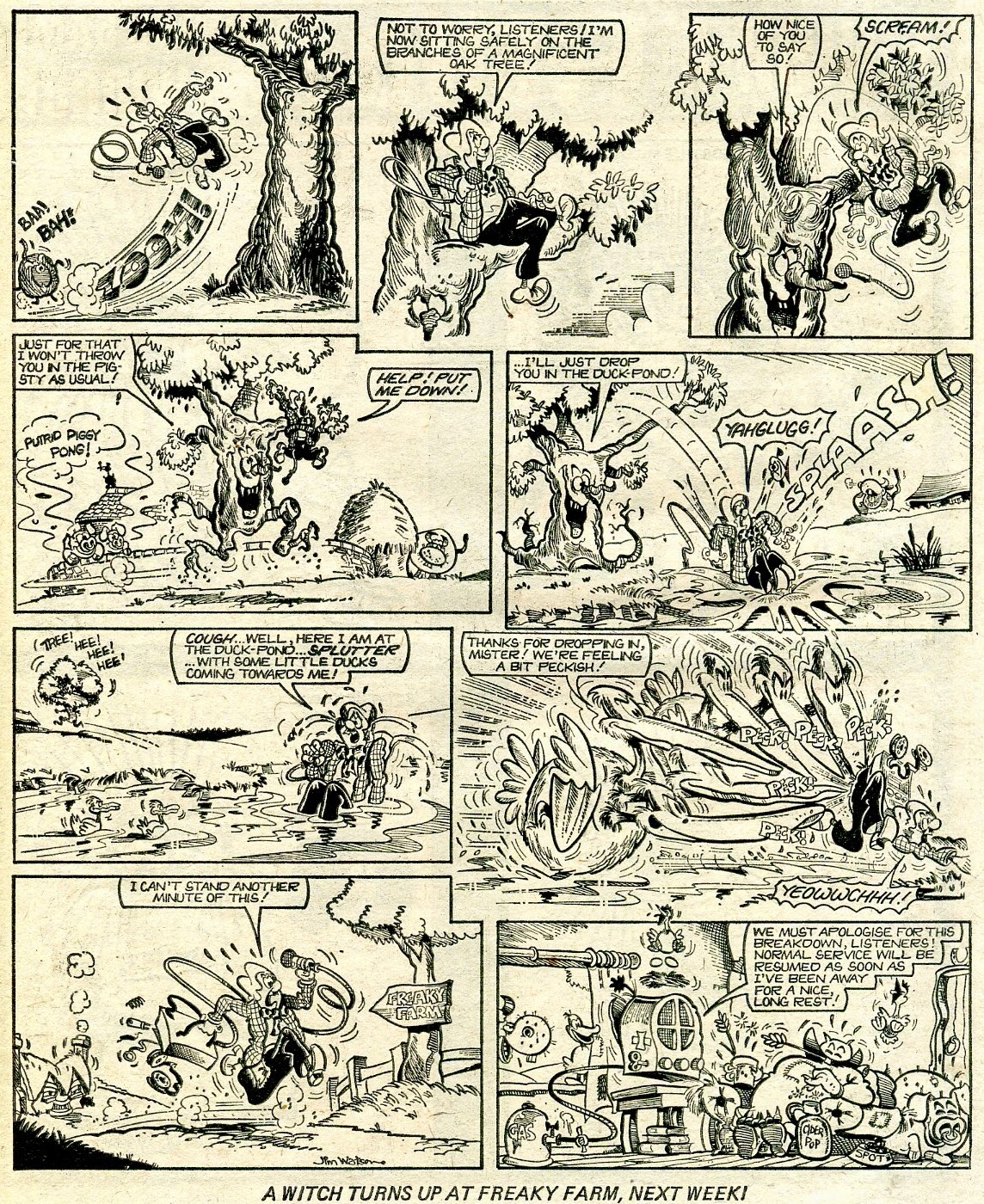 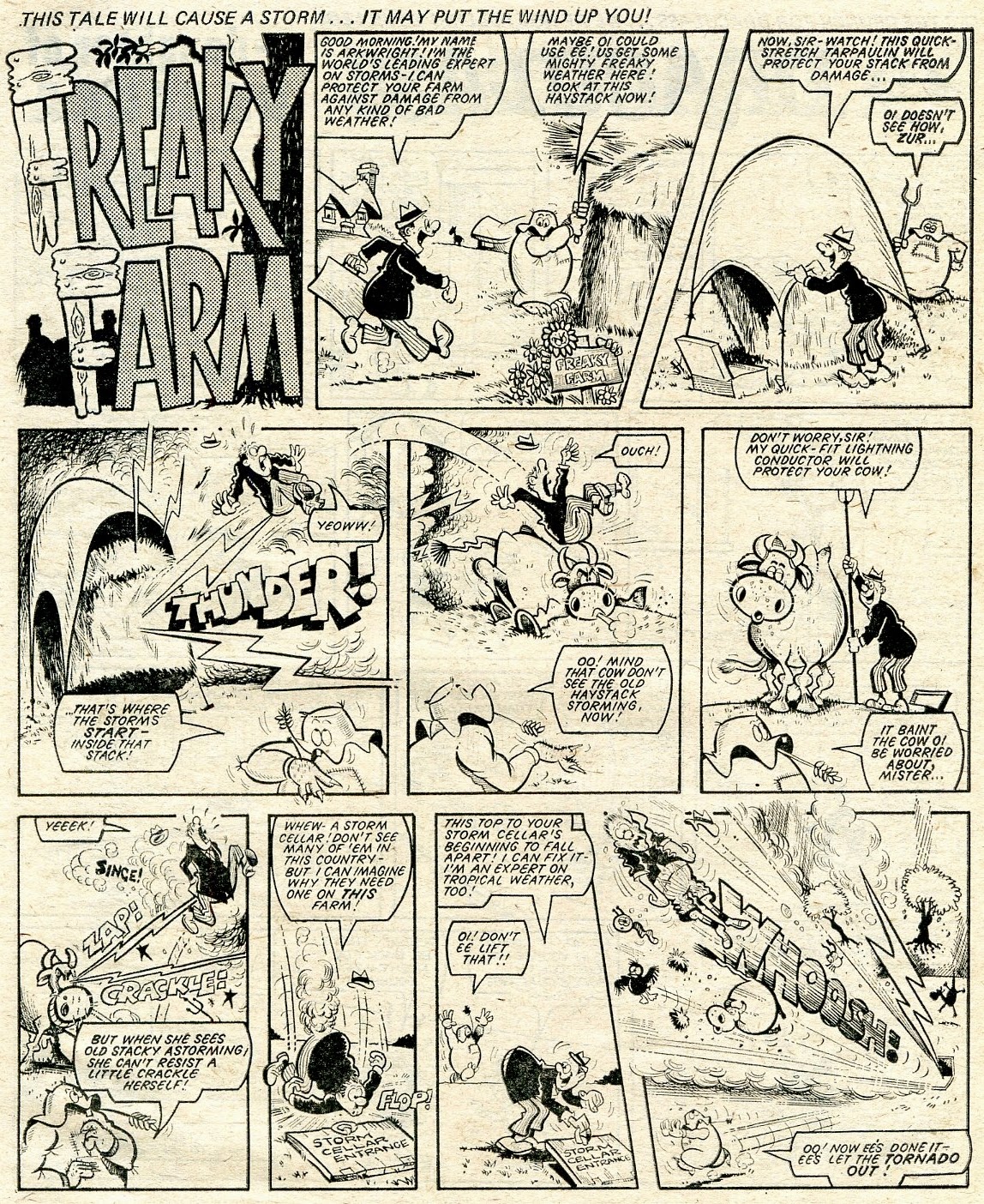 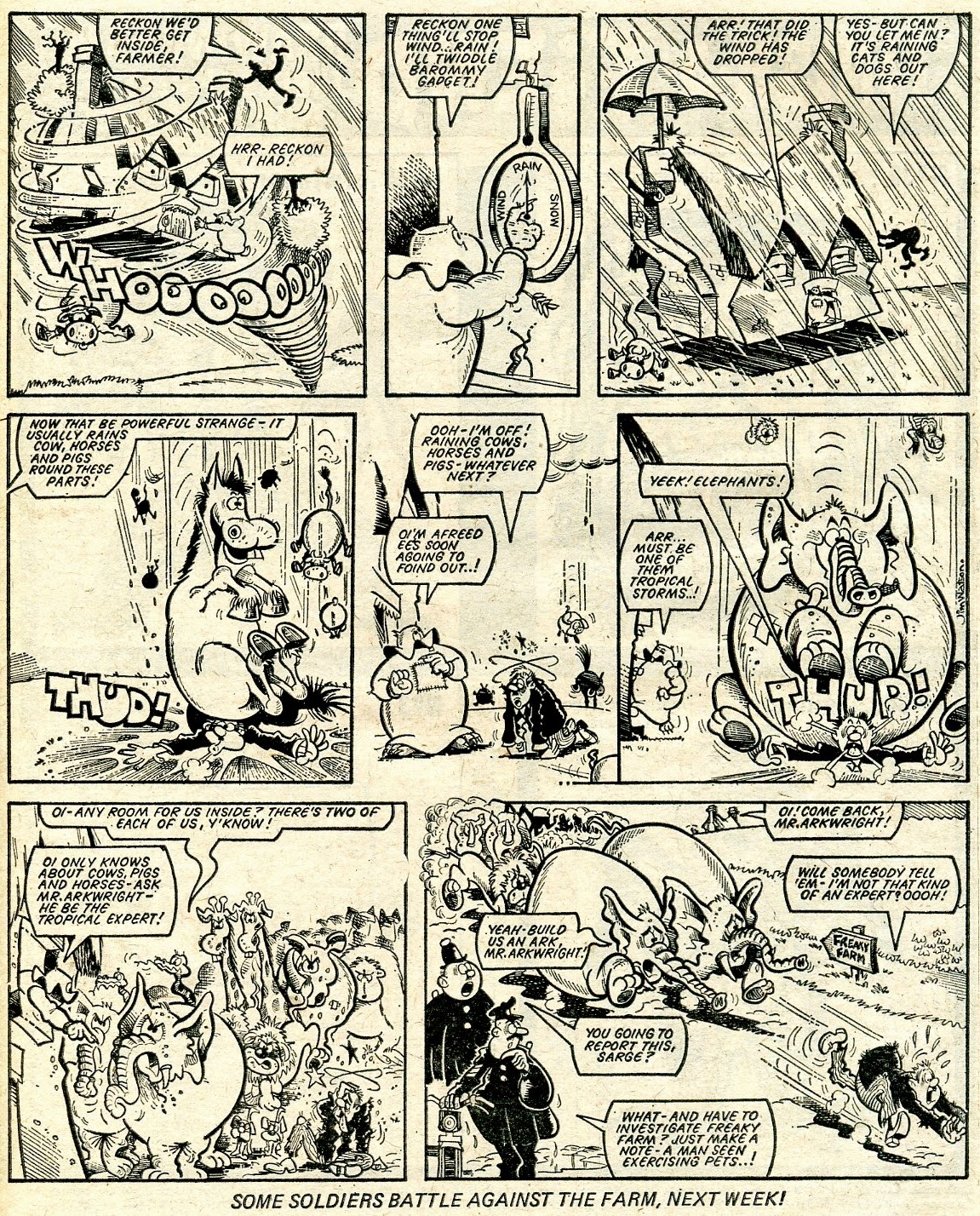 The horror show put up by the monsters of Freaky Farm never failed to produce the desired effect on the poor visitor(s), except in the very first issue when a reader of MONSTER FUN COMIC dropped by: 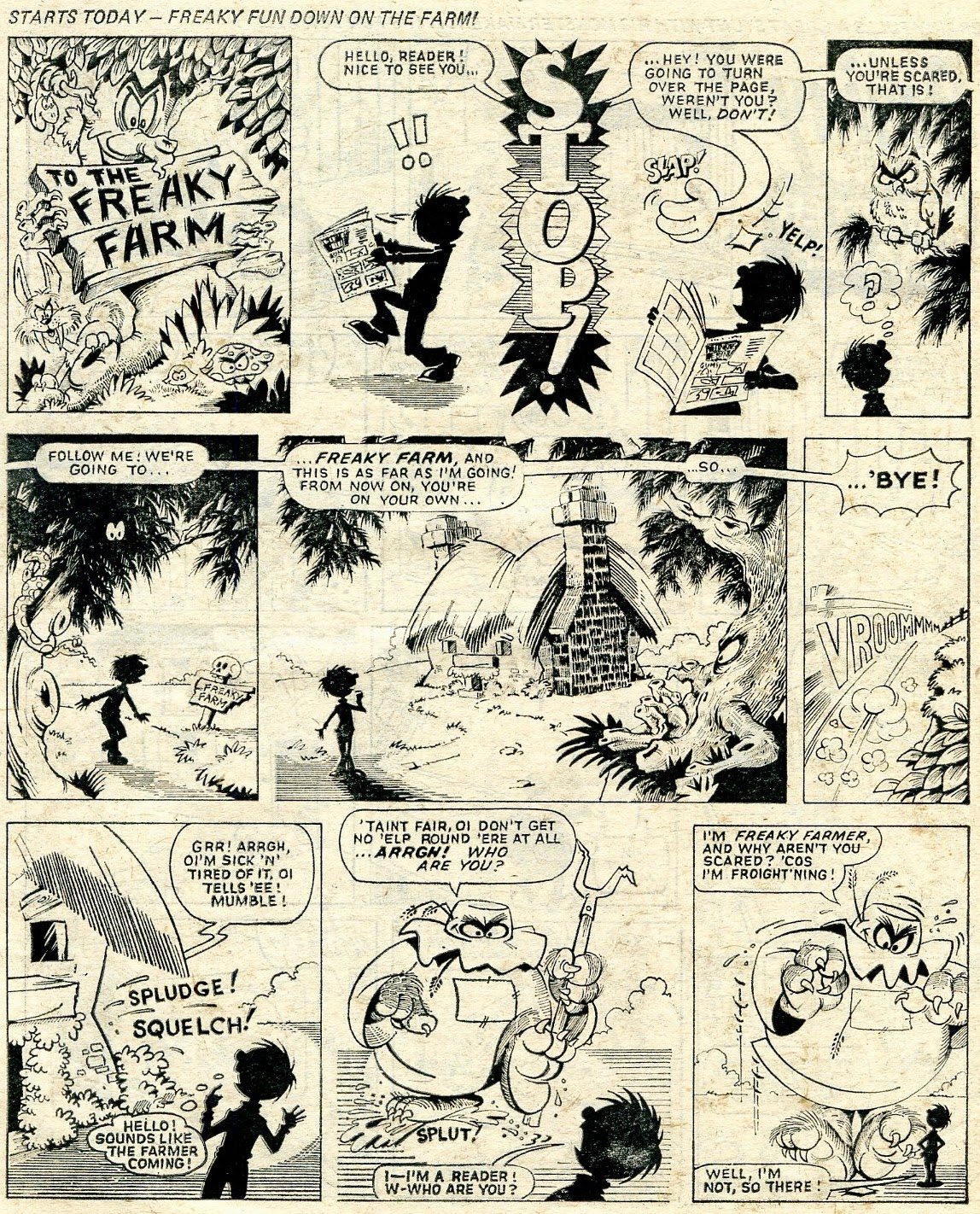 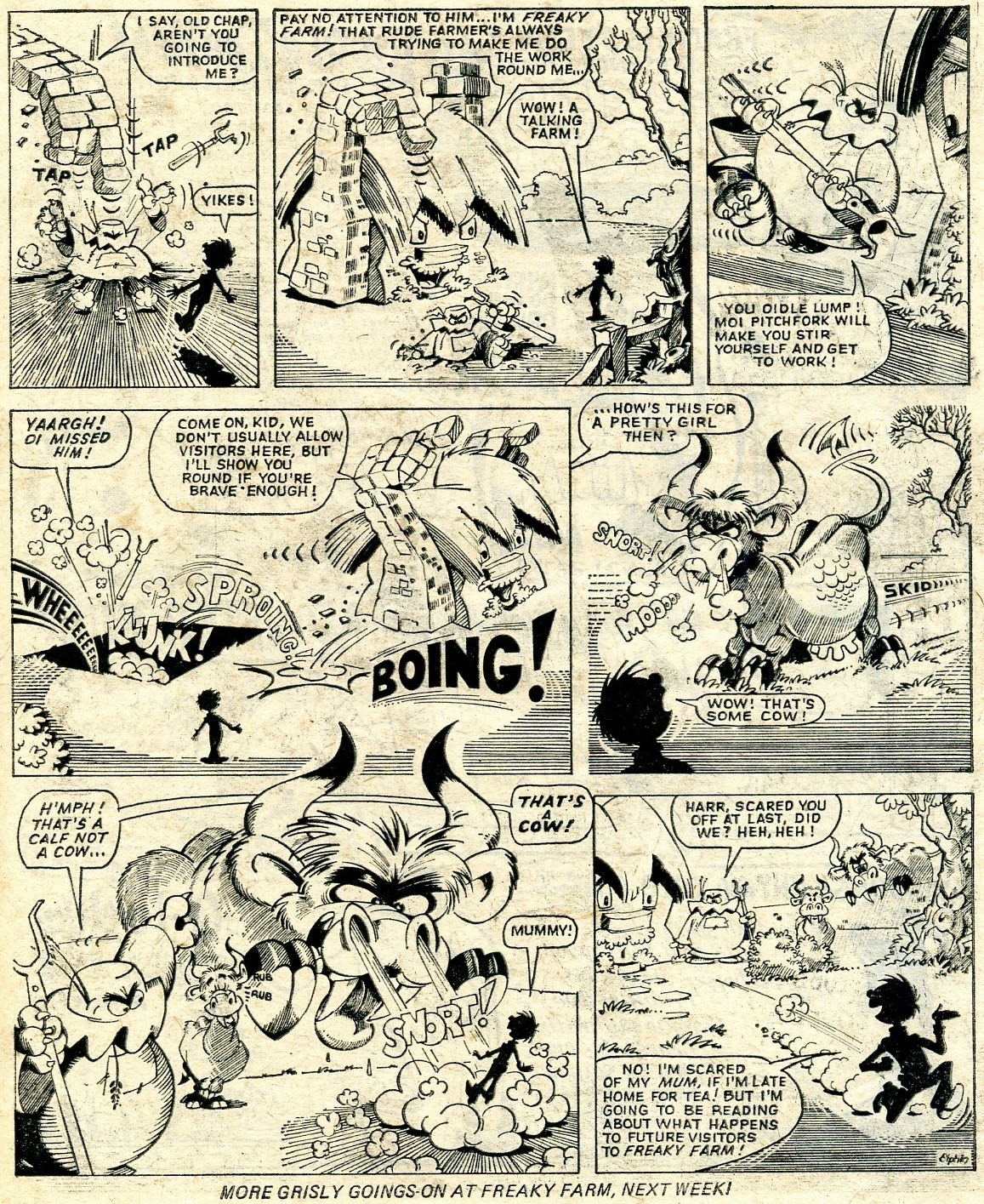 The 2-page strip ran in issues 40 to 73 and didn’t miss a single week. In the last frame of the final episode in MFC No. 73 Freaky Farmer told the readers he was retiring: 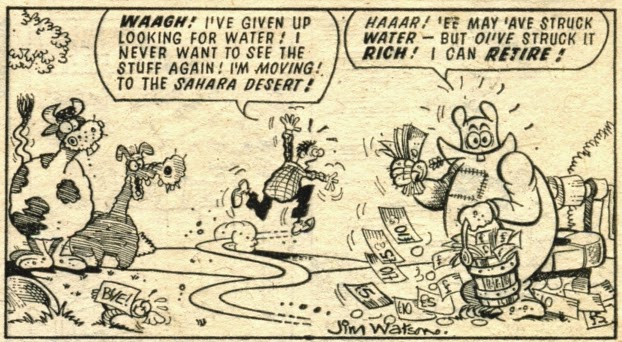 The main illustrator was Jim Watson who signed the majority of the episodes starting from No. 49. The first two sets were signed Elphin, although the first one in No. 40 looks very much like Jim Watson’s work to me. The episodes which followed in issues 41 – 48 may have been drawn by someone else but Elphin’s signature in No. 41 makes things quite confusing... Was Elphin a nom de plume of Jim Watson and it was him all along, experimenting with different styles before settling on the one he was satisfied enough to put his signature to?

The episodes in MFC issues 71 and 72 were drawn and signed by the excellent and universal Les Barton who IPC editors could always rely upon whenever their main artists weren’t available: 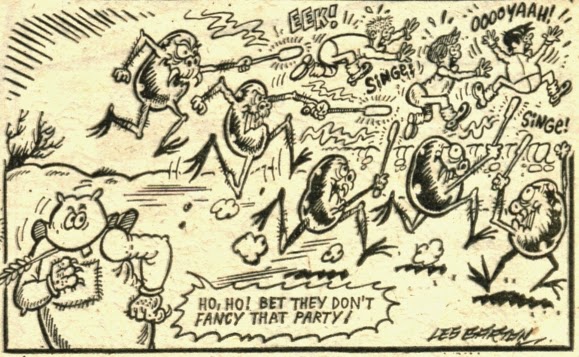 IMHO, the strip wasn’t very original or imaginative so it is probably not a big surprise that it did not make it to the new combined BUSTER AND MONSTER FUN.