Rick and Charlie Wild were super-athletes and the strongest boys in the World. Their adventures (illustrated by Mike Western and written by Tom Tully) appeared in Valiant weeklies for more than 10 years starting from 1964. I like this story from VALIANT Space Special 1968 because of the atmosphere and energy of a major sports competition that it carries. 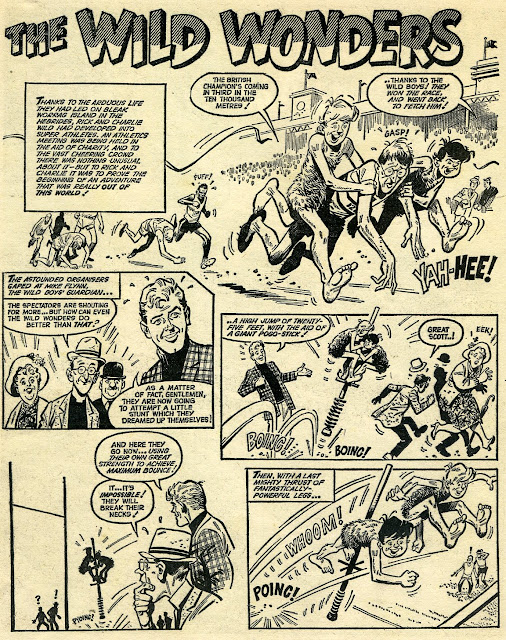 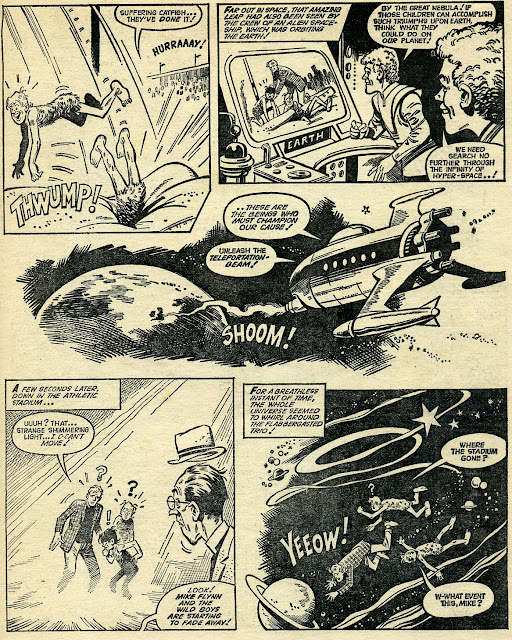 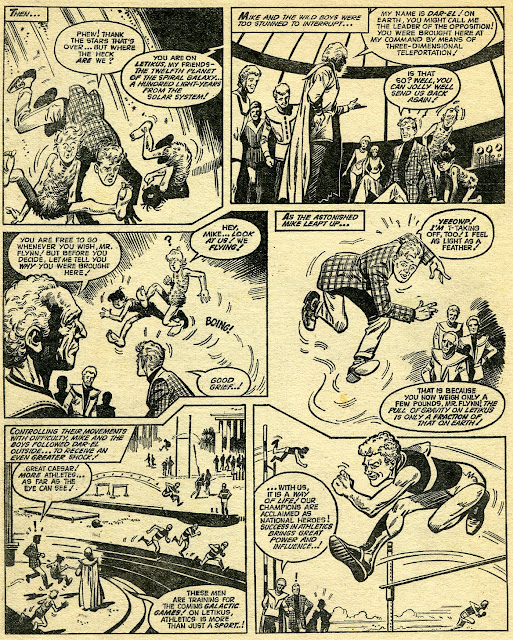 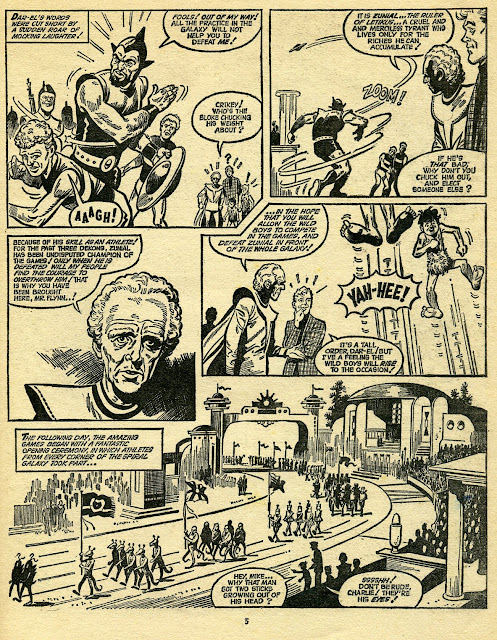 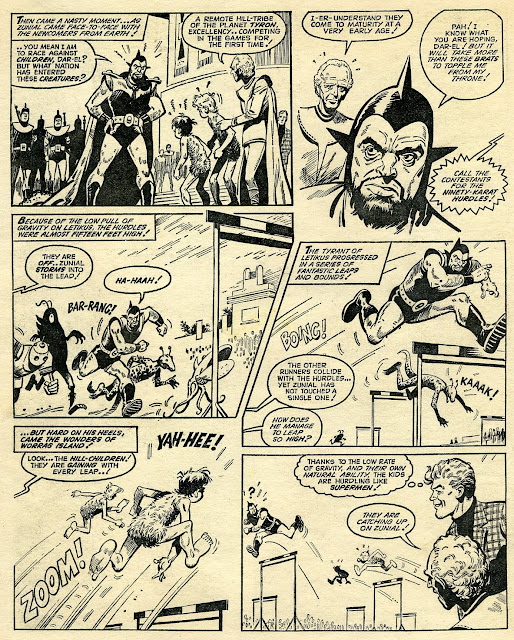 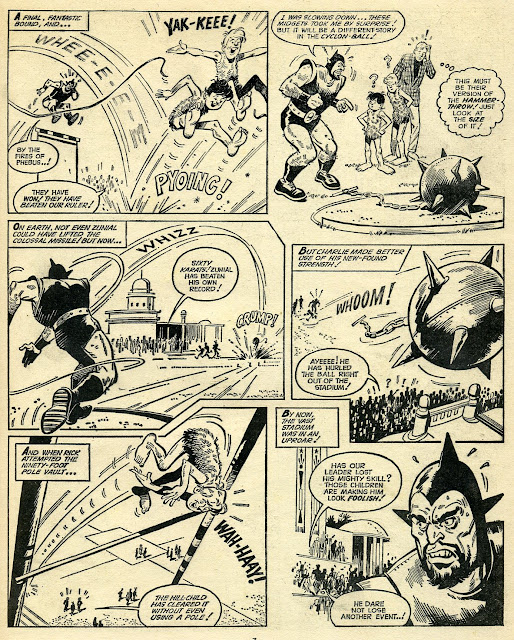 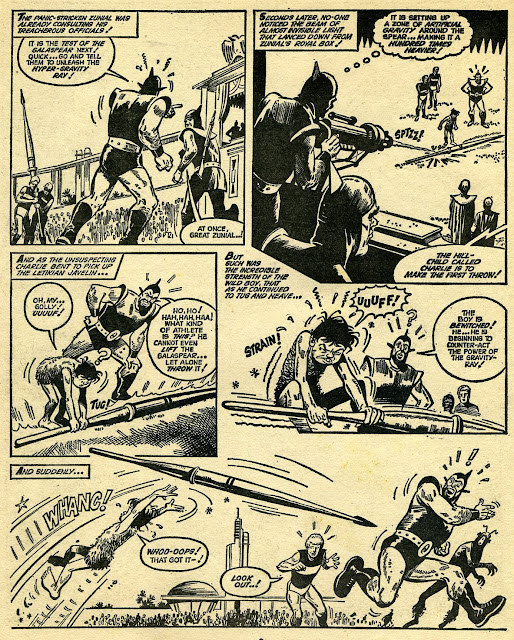 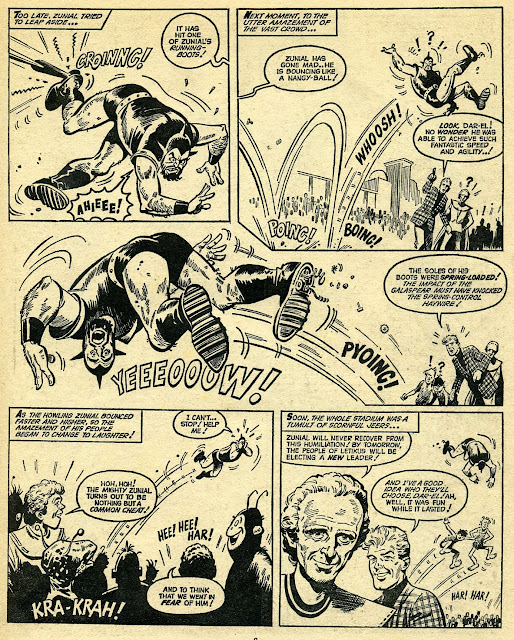 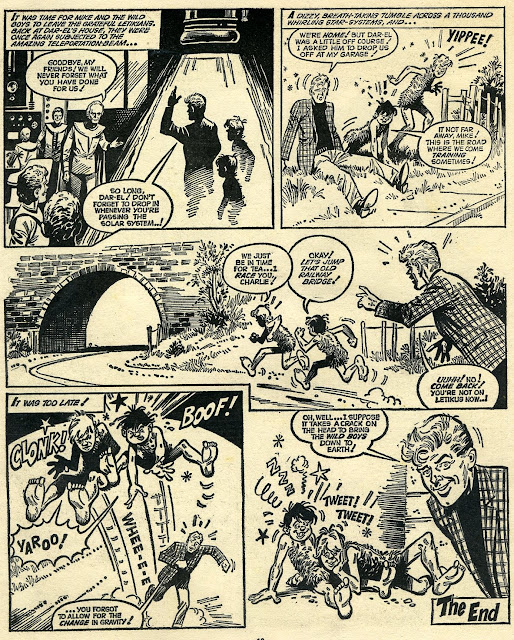 Posted by Irmantas at 2:54 PM No comments:

A LOOK AT COR!! STRIPS: FIENDS AND NEIGHBOURS


The appearance of Fiends and Neighbours in COR!! issue dated 24th November, 1973 (No. 182) was probably the last good thing that happened to COR!!  Alfred Jones and his wife (whose name I haven’t found mentioned in the strip), a childless mid-aged traditional couple, got new neighbours Mr. and Mrs. Really-Ghastlies and their two kids – daughter Bella and son ‘Orrid (who had tiny horns and slept hanging down from the curtain rail). Later in the series the Joneses discovered that their neighbours also had a giant baby who used to go missing for weeks on end hiding in the bushes. Mister Really-Grastly’s name was Igor and the Mrs. was never addressed by name (as far as I can tell).

In the opening episode the nosey Mrs. Jones is eager to meet their new neighbours so she pops round and pretends she wants to borrow a cup of flour. The lady is in for a series of shocks at the peculiar looks and ways of the new neighbours as she makes their acquaintance: 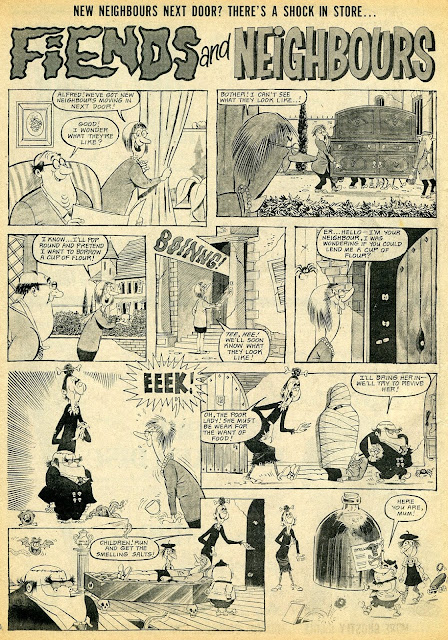 The Really-Ghastlies were a strange lot indeed, without any doubt they were close relatives of the famous Adams Family in America (no direct references were made in the strip though) and they also had family in Transylvania (we know that Bella’s grandmother lived there). The chambers of their crumbling mansion were decorated with coffins, skulls and old family portraits of witches, devils and fiends. The family’s favourite pet was a monster-octopus by the name of Cyril who appeared in many episodes. Little ‘Orrid had a pet vampire bat Grockle. Other pets included meat-eating fish and a jelly-monster by the name of Fido who fed on ant eggs. Besides, the Really-Ghastlies had a baby dragon and a vulture named Vernon, not to mention a whole swarm of other small creepy creatures that inhabited the mansion and the hideous man-eating plants that grew in the garden. Over the weeks the unfortunate Joneses also got to know their neighbours’ visiting relatives such as gnome cousins from the haunted wood and the giant cousin Boris. To make things even more exciting, in the last COR!! episode ‘Orrid made himself a Frankenstein friend by the name of Clunk-Click.

The comedy of the strip was created by “cultural differences” between the neighbours who never ceased to shock and surprise each other. There is probably no need to say which family always fell victim to the ‘shocks’ part of the bizarre neighbourly relationship. The Really Ghastlies, however, were also puzzled at the ways of the Jonses who they thought were a couple of very weird neighbours... 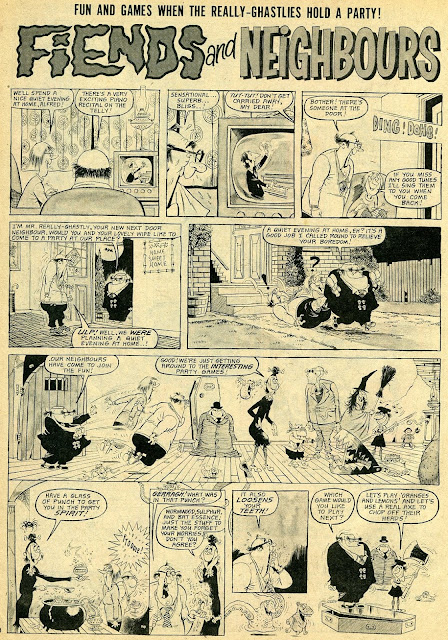 The feature was beautifully illustrated by Graham Allen who drew all but one of the 30 episodes in COR!! weeklies (the episode in the issue with the cover date of 18th May, 1974 (No. 207) was by another artist). During the short run of the strip the Really Ghastlies appeared on two front covers of COR!! issues dated 1st December, 1973 and 2nd March, 1974 (Nos. 183 and 196). They also led the crowd of COR!! characters on the front cover of the last issue of COR!! marching to join the lineup of BUSTER.

The feature survived merger with BUSTER and continued there until 22nd November, 1975. Ray Moore’s BUSTER index says that the script writer was Les Lilley, so I believe it is safe to assume that the same writer also contributed scripts for the COR!! episodes.

I saw some Fiends and Neighbours reprints in the short-lived SCREAM horror comic of the 80s. 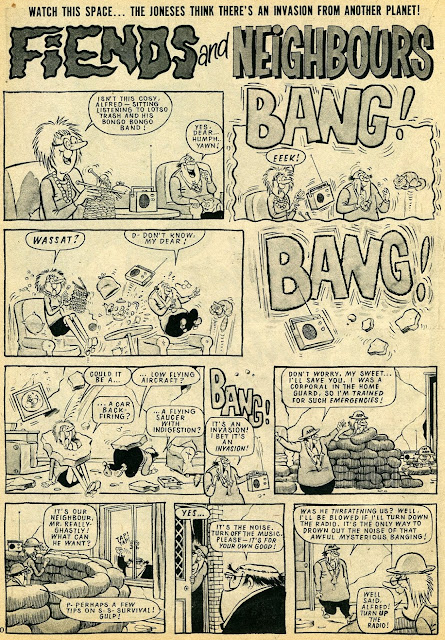 Here are details about appearances of Fiends and Neighbours outside of COR!! weeklies. As this is one my favourite strips and a highlight in COR!!, there is a good chance to find examples of the artwork in my blogposts dedicated to the particular Holiday Specials and Annuals.

Let’s take a quick look at tennis today. As I mentioned it in my previous post, tennis was one of the privileged sports in British comics. Many popular characters tried a hand at the sport once in a while so it probably won’t be the last time that we see it in this series of Olympic posts… 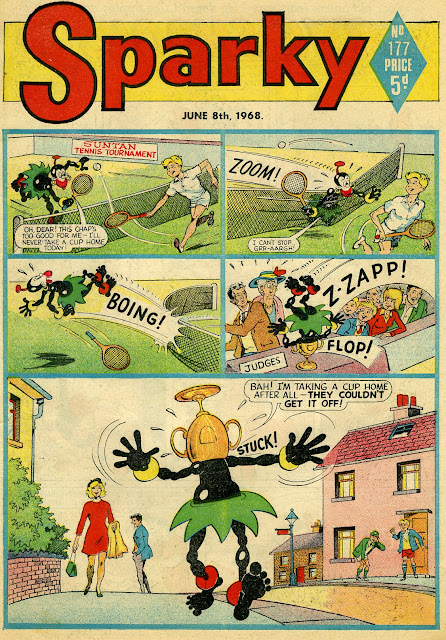 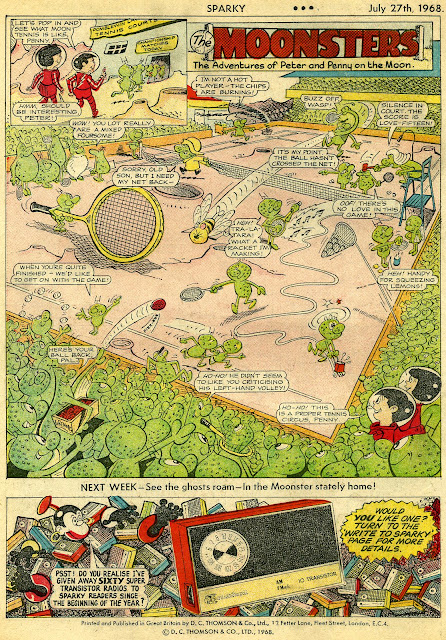 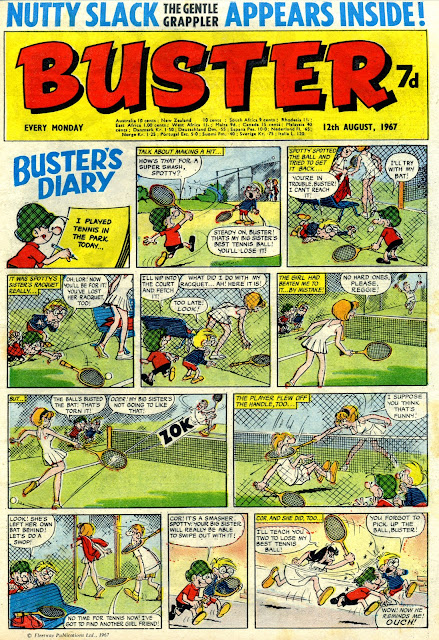 
Over the years, certain sports received considerably more attention in British comics than others. I am referring to football (of course!), cricket, motor sports, boxing and tennis. In addition to being “traditional” popular British sports that were very much part of the daily lives of many kids, they had strong comedy potential that could be exploited in comics.

Cricket and motor sports are not part of the Olympic Games, so I will leave them out. Football has already been covered extensively last month but I found one or two interesting examples and will probably include them in later posts. Tennis can also wait a bit. Today’s post is all about BOXING, and there is certainly no shortage of strips with the boxing theme.

Here are some from BEEZER by Leo Baxendale:

Leo Baxendale is said to have signed all of his work for WHAM! so it is safe to assume that any unsigned instalments were by other artists: 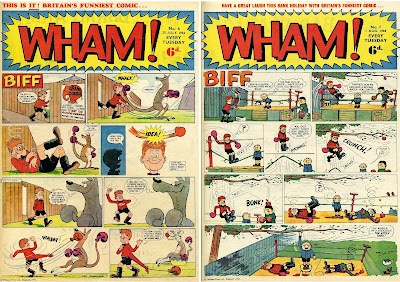 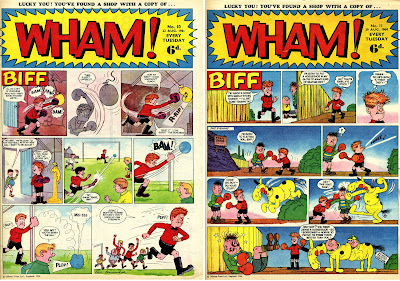 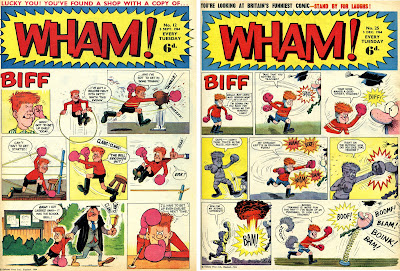 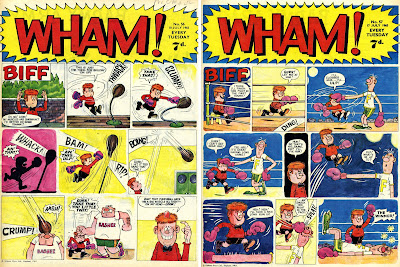 And here are some examples by Ken Reid from two different periods of his career:


In the 70s VALIANT had nice Mike Western covers some of which featured outstanding Olympic athletes from different countries. You could actually learn things by reading comics then... 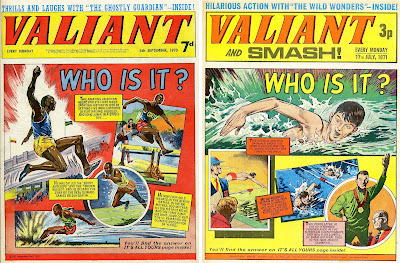 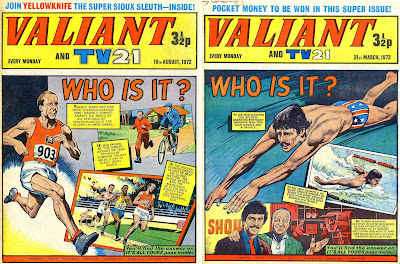 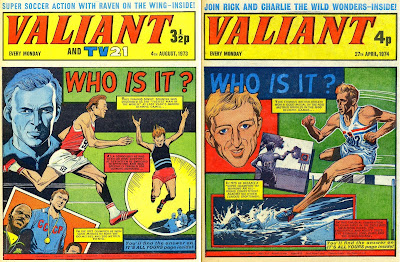 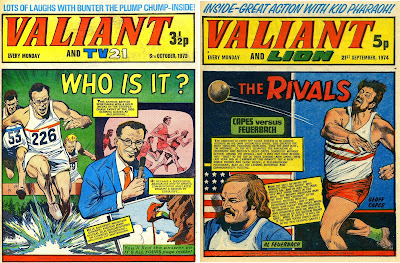 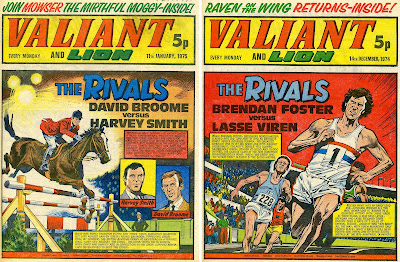 My intention is to focus on humour comics and I’ll start with this nice crowded Pirates’ Olympic set by Leo Baxendale from BUSTER dated November 25th, 1968: 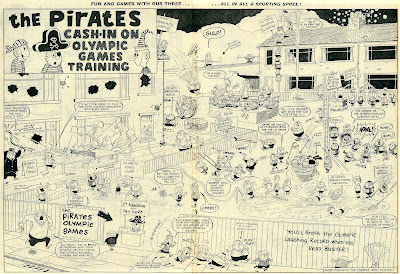