Regular readers might remember the little series of self-portraits of those tireless but often anonymous and uncredited toilers of UK comics – the artists, that I did a year ago. You can view all the old posts HERE. I’ve found a few more cute examples in the course of 2013 and will show them in the next few posts before I switch to the Festive theme. 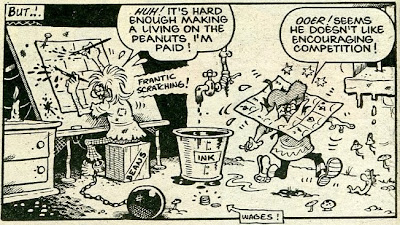 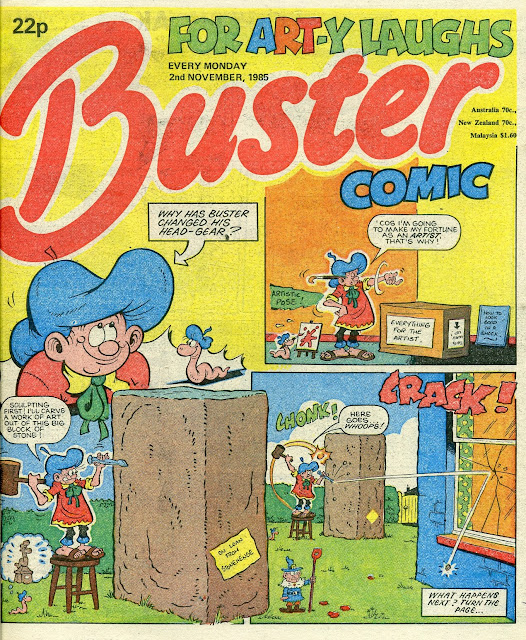 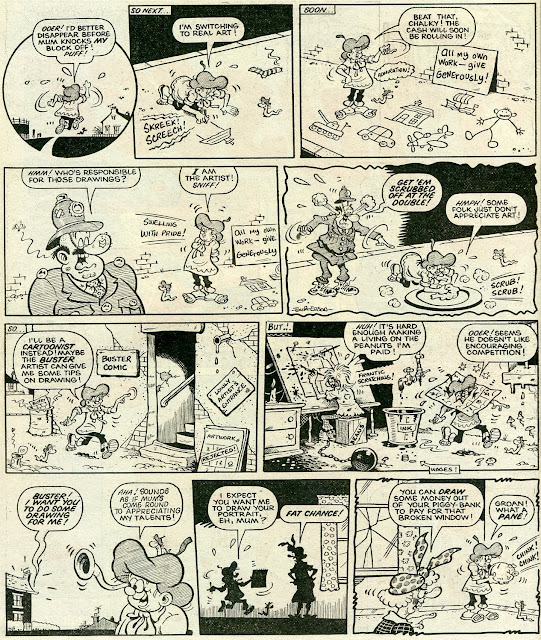 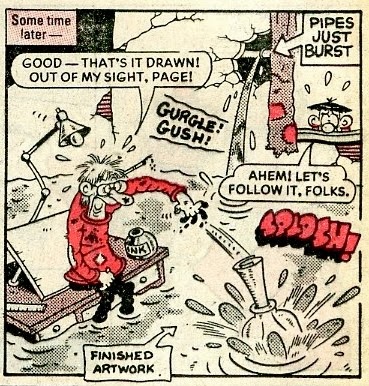 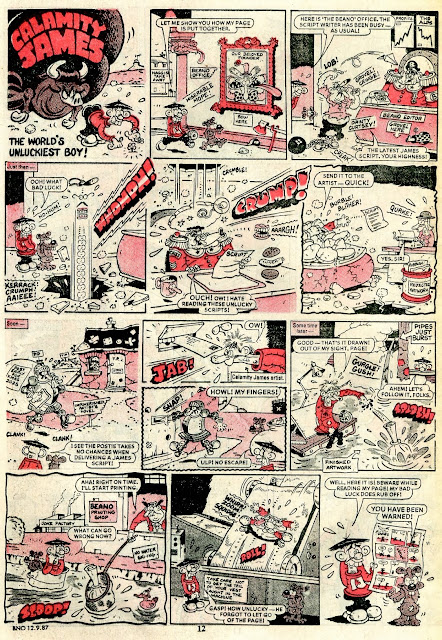 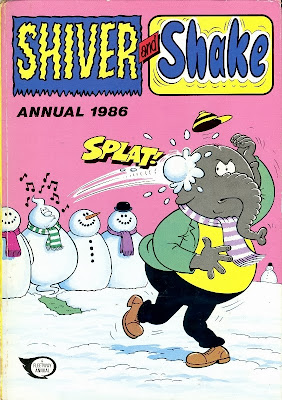 1986 SHIVER AND SHAKE Annual retained the page-count of 96 but the price increased further to £2.50 while the proportion of colour pages dropped considerably in comparison with the previous Annual. Things were rapidly deteriorating...

Frankly, those SHIVER AND SHAKE annuals of the mid-80s were increasingly becoming rather boring and formulaic (just as the entire stable of IPC children’s comics, if you ask me). Sales must have been declining and the publisher must have realized that enough was enough so the mid-80s was the time when many once-popular children’s titles had their annuals released for the last time (Christmas of 1984 for Krazy, Cheeky, Knockout and Monster Fun Comic, and Christmas of 1985 for COR!!, WOW! and Jackpot). SHIVER AND SHAKE was no exception and this 1986 Annual (published for the Christmas of 1985 of course) happens to be its last.

The last two annuals are very similar, as if they were both put together in one go.

Mitch contributed both inside covers – one set for spooks (Shivers) and the other one for elephants (Shakes): 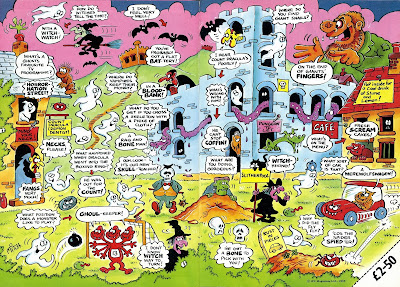 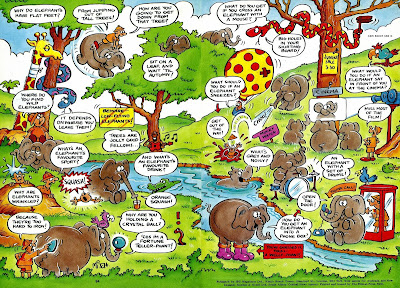 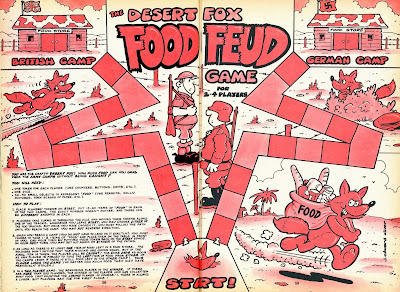 Ghoul Getters Ltd. failed in solving the problem of a shop keeper whose shop was haunted by a ghastly doorman who hated customers and slammed doors in their faces. In the end Ghoul Getters decided there was only one solution which was really going to work: 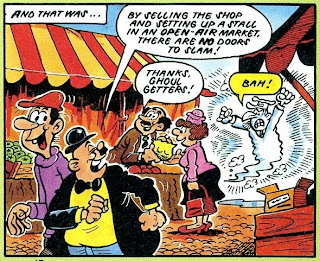 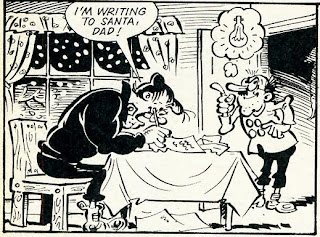 In the first Frankie Stein story Prof. Cube persuaded Frankie that he should deliver his letter to Santa in person because one couldn’t trust the post these days! Cruel Cube hoped that with luck, his dreaded son will get lost and never come back. Indeed, Frankie did get lost and fell asleep in a storage yard packed with gnome statues. Next morning a store manager took him for another statue and placed him in his Santa’s grotto display but when Frankie gradually thawed out the terrified customers caused a stampede.

In the second story Prof. Cube wants to claim his bingo prize from the local paper and nearly misses the deadline thanks to clumsy Frankie who is doing his best to be helpful. When Dad finally reaches the offices of the newspaper, he finds out that he got the numbers wrong because he was holding his card upside down. No prize money for Dad this time, only repair bills from owners of the property that Frankie destroyed as they rushed to claim the prize. 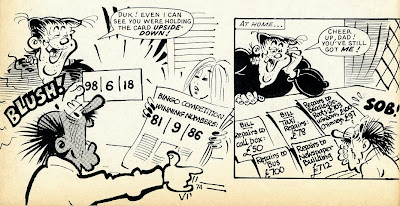 The Forest Legion put on a show in front of a TV crew who came to film some natural forest wildlife. The legionnaires are so eager to become TV stars that they overdo it and the TV people drive off angry and disappointed. Artwork is by the same illustrator who was in charge of the strip in the previous Annual. 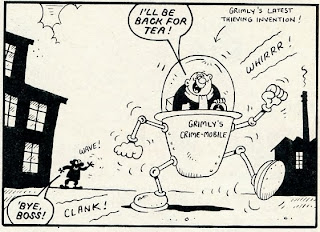 Just as in the previous Annual, there are two sets of Grimly Feendish, one in b/w and one in full colour, both drawn and signed by Martin Baxendale.

In the first episode Grimly Feendish has built himself a Crime-Mobile and is off to clean out every bank in town. This time the cops stop him by removing a manhole cover from his path.

The scene of the other episode is set at the Police College where students are watching a video film captured from Grimly Feendish documenting his various crimes, sneakiness and mastery of disguise. Grimly shows up disguised as a video repair man and gets his tape back together with the TV and the video player, only to find out that the laugh’s on him… 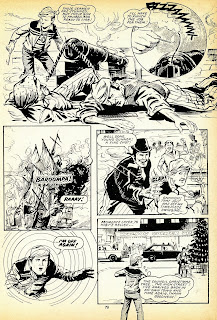 In the splash panel of Toby’s Timepiece we see Toby in a crowd of terrified Londoners who are running for their lives as the great fire of 1666 rages through the city. A bit later we find out that it all started on Christmas Eve when Toby realized that he hasn’t bought Mum’s Christmas present. Toby sets off to catch the shops before they close but accidentally drops his five-pound note and leaps to catch it before it lands on a bonfire. That’s all it takes to activate the timepiece and now we know how Toby found himself in the London of 1666. The watch does not react well to the crowded and violent environment of the burning city so it quickly transports Toby to the year 1805. The battle of Trafalgar is about to begin. Toby fires a gun and hits a French ship but the jolt sets the timepiece off again and he finds himself back in his own town and time with just enough time to buy his Mom a perfume with an unusual name of FLAME. The story is easily the worst in the whole series…

The review of the 1986 Annual concludes the series of posts on SHIVER AND SHAKE, a short-lived but excellent UK comic. Every single strip that appeared in the weekly has received its own post, as has each SHIVER AND SHAKE Special and Annual. It took me nearly a year to accomplish the mission and this blog is now the World’s most comprehensive resource for SHIVER AND SHAKE enthusiasts (all three of them…). You can revisit the whole sequence by clicking SHIVER AND SHAKE label HERE or in the column on the right.

SHIVER AND SHAKE is the second IPC comic title after COR!! that has been covered in every detail on Kazoop!!  If all goes as planned, 2014 will probably be the year of MONSTER FUN COMIC but a few weeks’ delay is likely to occur because preparations for a new series will take some time, besides, I always have lots of other things to do in December and the first months of the New Year. This does not mean there will be no blogposts –  as a matter of fact, I have lots of goodness lined up for the remaining weeks of 2013 and the beginning of 2014: I will continue with Artist Self Portraits series that I started a year ago; I will then do a complete retrospective of Christmas episodes featuring a character known as the ‘friendly monster’ (can you guess who?…), followed by a series of cover galleries of my favourite period of one of my favourite UK comics… It will be fun!
___________________________

P.S. If you decide you want to leave a comment, please, do by all means but be aware I won’t be able to read, publish or answer your comments until the end of November because when this post goes live I will be soaking up the sun in Dubai without the possibility and desire to connect to the web  :))))
Posted by Irmantas at 4:32 PM 1 comment: