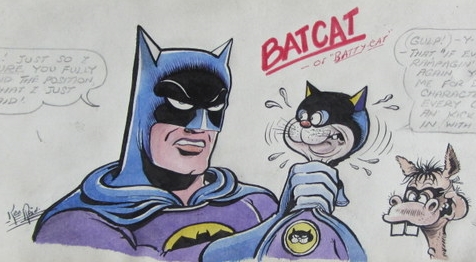 If you bought the Power Pack of Ken Reid, you may have already read the biography bit, and wondered why Part 2 only had one illustration while Part 1 had quite a few.

There were two reasons – firstly, the page count of Frankie Stein and Jasper the Grasper in Vol. One was smaller than that of the three strips that went into Vol. Two, so the Frankie+Jasper book had a lot more space available for extra images. Secondly – the quality of the images that I had and would have wanted to include in Vol. 2 was rather poor and not suitable for print. It is, however, good enough for a blog post or two.

You may have read in the biography that Ken pitched quite a few ideas for new strips to Odhams, and Batcat was one of them. I believe the Batman spoof would have made a hilarious strip, but the publisher rejected Ken’s idea. It is described in detail in Vol. 2, and here are a few drawings that Ken enclosed with his letter to the editor. 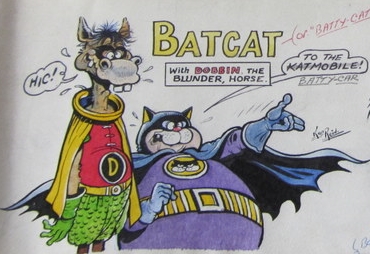 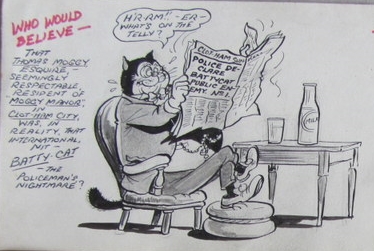 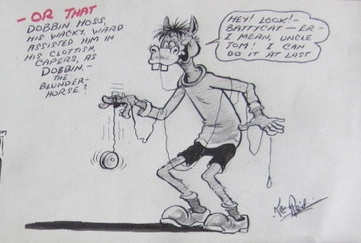 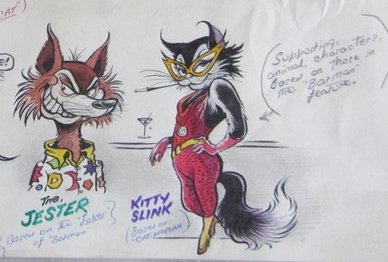 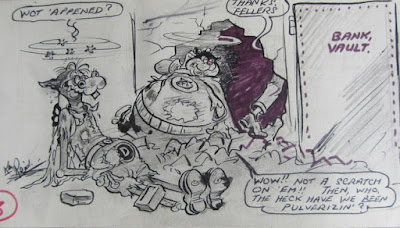 If you haven’t ordered your Power Pack, you can still do on the IndieGoGo page until the second week of September. If you prefer individual books, click on the banner on the right and go straight to my online store.
Posted by Irmantas at 9:12 PM No comments:

INDIEGOGO ORDERS FOR THE POWER PACK OF KEN REID FULFILLED ON SCHEDULE!

All orders for the POWER PACK have been shipped this morning, so if you supported my IndieGoGo crowdfunding campaign and are in the UK or the EU, expect a courier calling at your door sometime in the end of this week or early next week. The last POWER PACKS going to the USA, Australia, New Zealand and Canada will be posted tomorrow, and the supporters in those countries will receive their copies in a couple of weeks from now (depending on how quick the post office is).

Individual books are now available on eBay and directly from my online KAZOOP COMICS SHOP.

If you want the limited edition box set with free artwork prints, or individual books with the free prints, IndieGoGo is still the place to get them – I have updated the FEATURED PERK in the column on the right by indicating the number of slipcase copies still available. The offer will expire in the first days of September, or when the few remaining copies are sold – whichever happens first. CLICK HERE TO GO STRAIGHT TO THE CAMPAIGN PAGE!

I have lined up a series of Ken Reid posts to appear on this blog over the next few months, including one or two things that I wanted but wasn’t able to include in the biography part of the collection, and a long string of posts covering the serialized stories of Faceache in BUSTER (i.e. the stories that continued for two weeks or more)…

In the meantime, here’s an image of the pile of THE POWER PACKS before they were off to their new homes this morning: 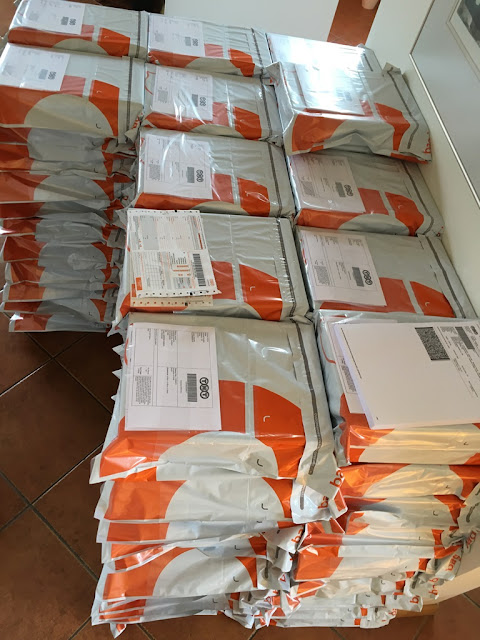 Posted by Irmantas at 2:30 PM No comments:

THE POWER PACK ORDERS ARE ABOUT TO SHIP!

The POWER PACK OF KEN REID slipcases have arrived ahead of time and I am starting to prepare the orders for shipping.

Here are a couple of images of what a 100 Power Packs looks like, followed by a video of me showing the box set and leafing through both books.

The IndieGoGo crowdfunding campaign is still live HERE, so if you still haven't pre-ordered your copy of the limited edition box set, now is the time because they are selling fast :) 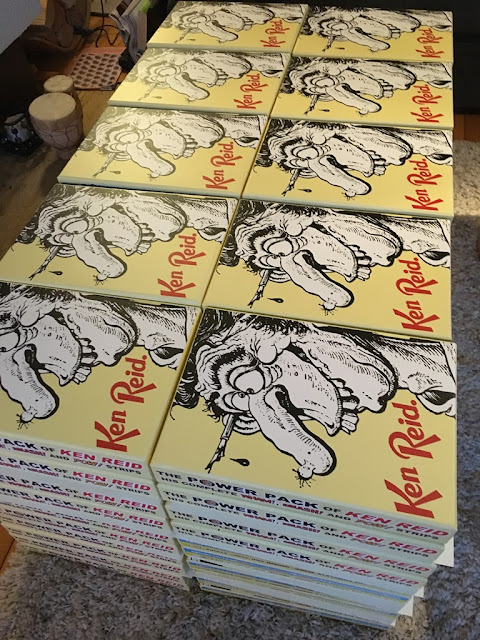 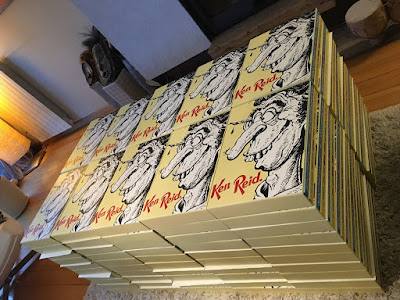 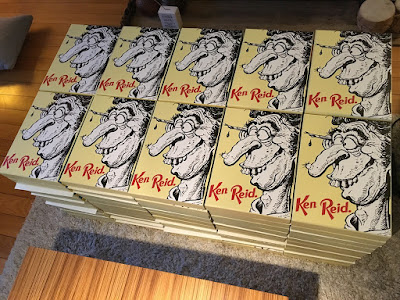 Posted by Irmantas at 9:16 PM No comments: