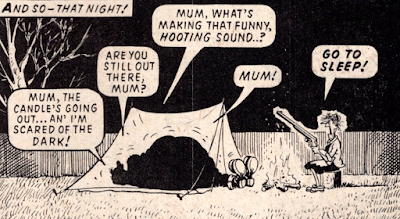 A look at the comics cover-dated 30th March, 1974 tells us IPC kept Mike Lacey very busy at the time. He drew at least 10 pages in COR!!, Shiver & Shake, Whizzer and Chips and Whoopee! Scared-Stiff Sam in Whoopee! is hands-down my favourite :) I believe Mike later used the drawing of Sam wearing his protective clothing in the last panel of that week's page 1 for a pull-out poster that came with one of the later issues of Whoopee! 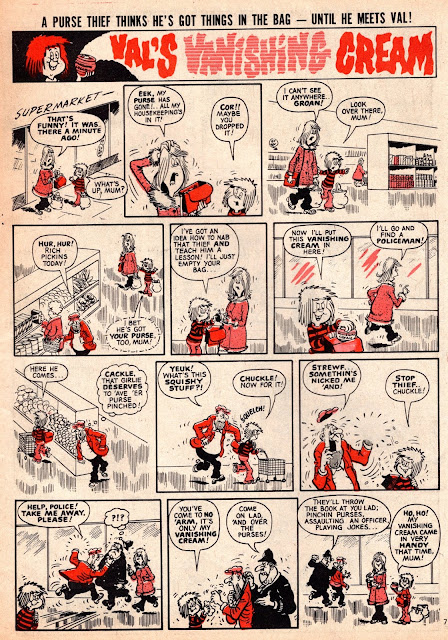 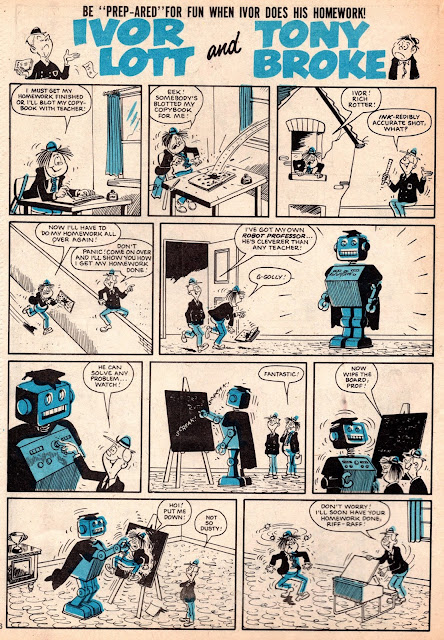 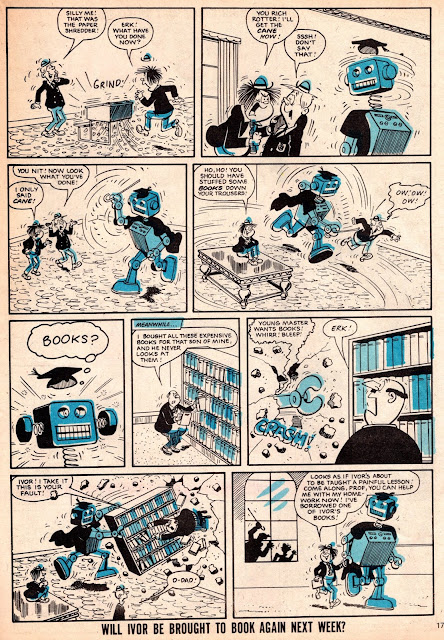 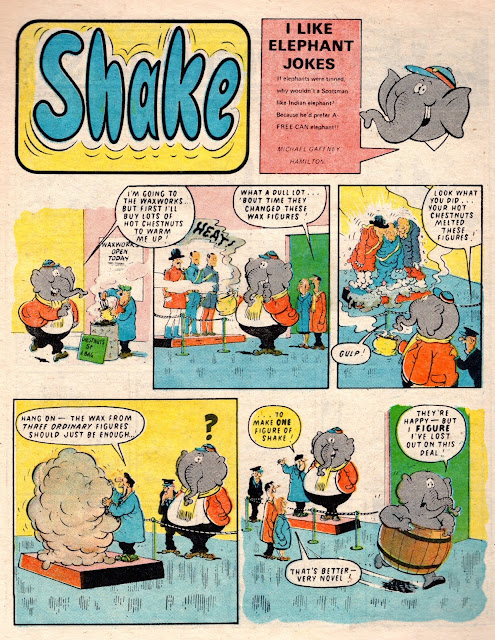 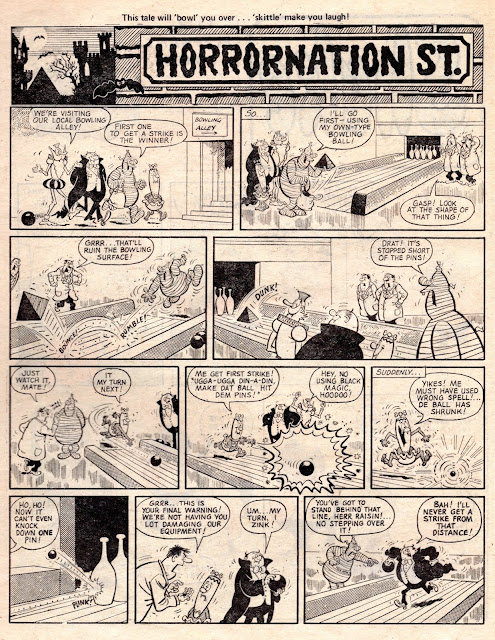 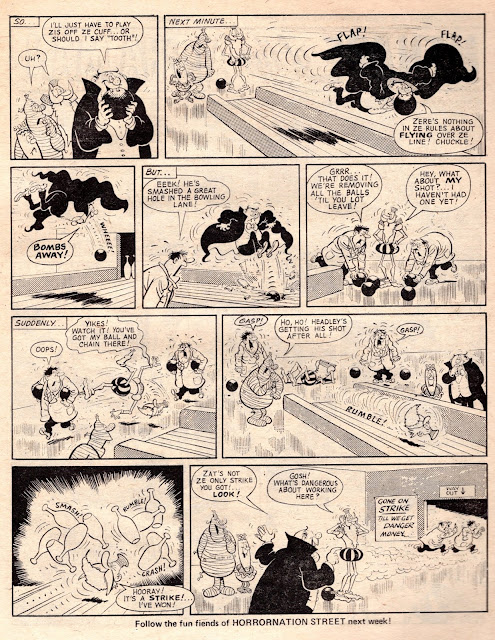 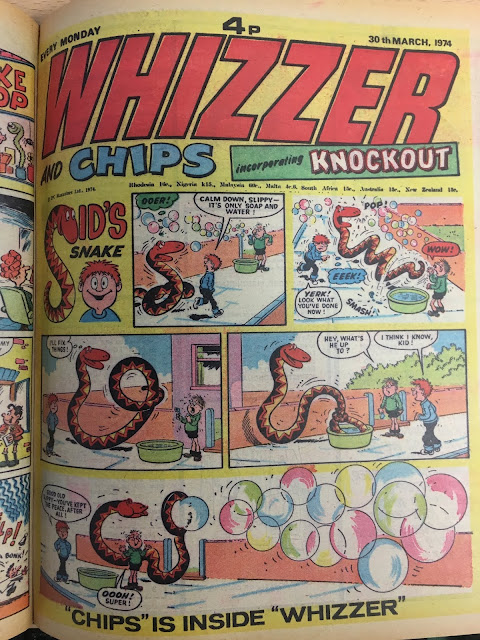 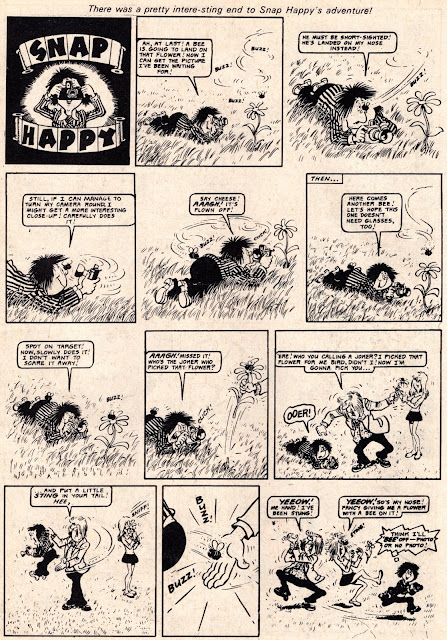 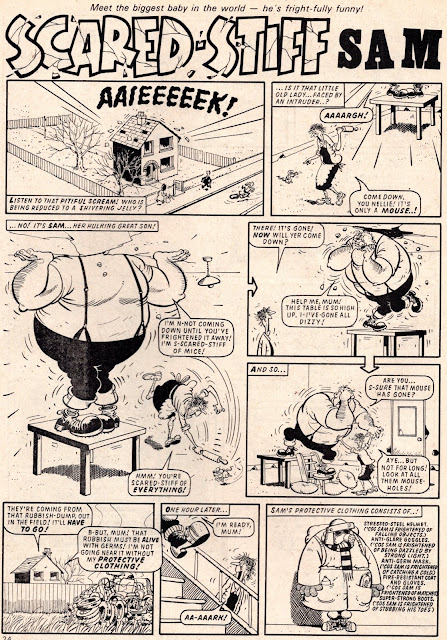 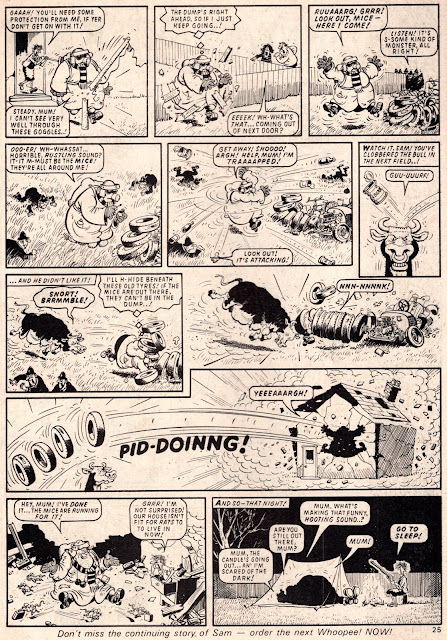 There are 4 more pages in Shiver & Shake, Whizzer and Chips and Whoopee! that I believe are also by Mike, although the style is somewhat different. If they are indeed by him, Mike Lacey’s stats for that week were a whopping 14 pages, but even if they aren’t, 10 pages is still a very impressive number! 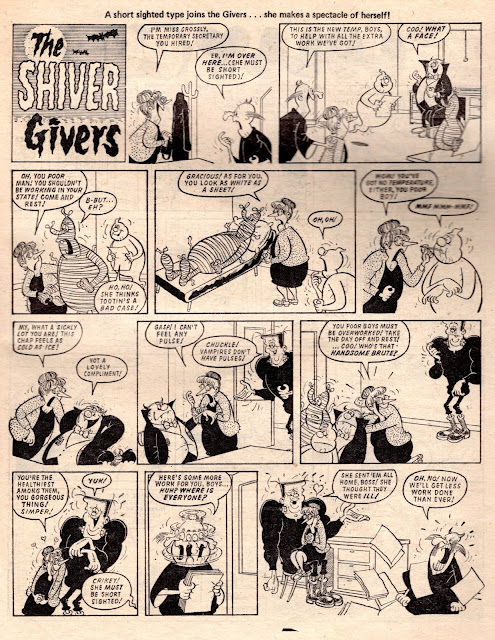 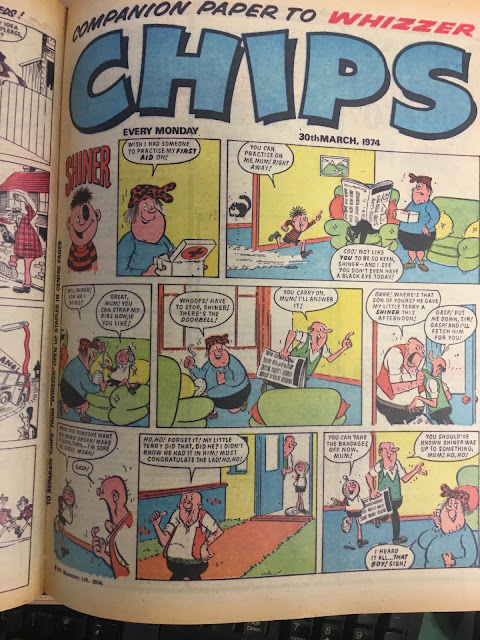 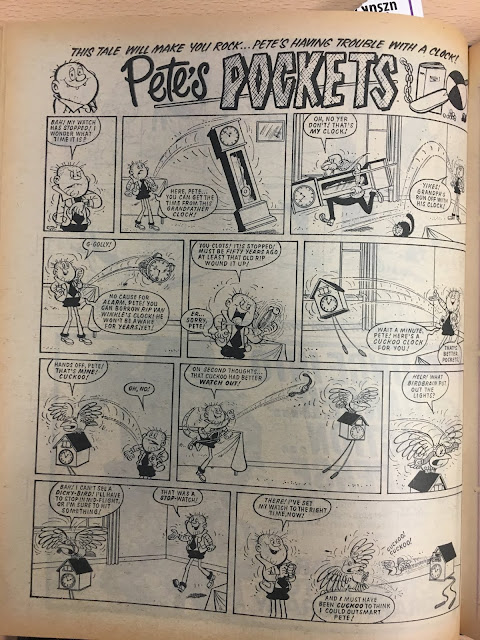 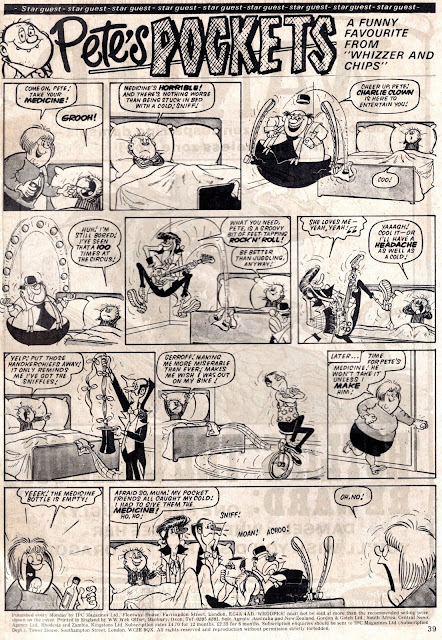 The next and final post in this series will cover the work of that week’s champion Robert Nixon!

Click on the POWER PACK banner in the right-hand column and get your copy of the POWER PACK OF KEN REID - the deluxe two-volume set of Ken’s strips in WHAM!, SMASH! and POW! comics of the ‘60s.
Posted by Irmantas at 6:46 AM 2 comments: 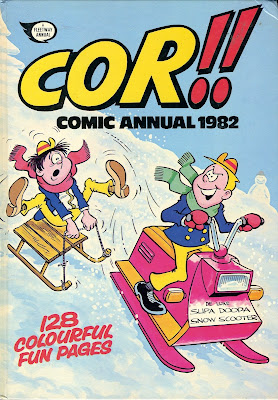 It is good to see original artists drawing new sets of their old characters in a COR!! publication again: Robert Nixon contributed a nice 4-pager of Ivor Lott and Tony Broke, Mike Lacey illustrated a new episode of Val’s Vanishing Cream and Frank McDiarmid drew a new set of The Gasworks Gang after quite some time. Here is Ivor Lott and Tony Broke by Bob Nixon: 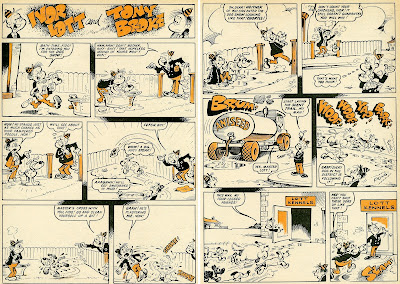 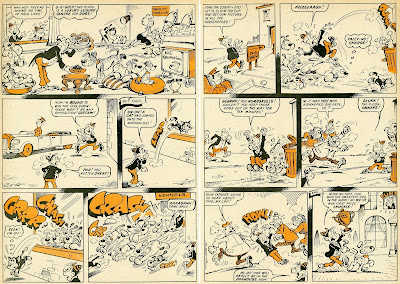 Two features were drawn by illustrators other than their usual ones: there is an episode of Teacher’s Pet by Mike Lacey (the only one so far, as far as I can tell) and a 3-pager of Jasper the Grasper by Frank McDiarmid (also the only one that I’ve come across). 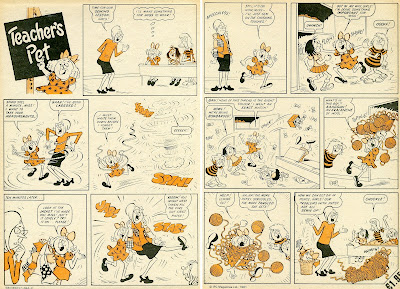 Les Barton’s Fiends and Neighbours didn’t have a new masthead this time but there were one or two large dramatic panels showing Jonses’ sufferings, here is a nice one:

Try Again Len was the only one-off in the Annual. It looks rather uninspired to me... 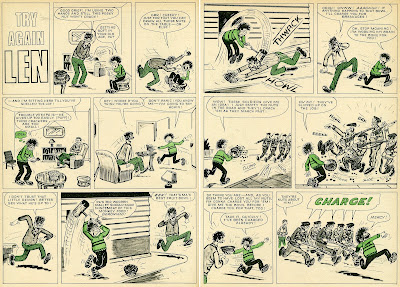 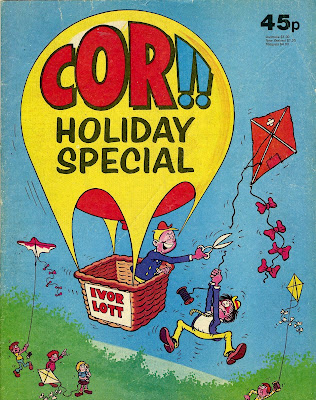 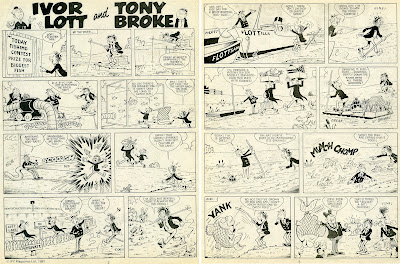 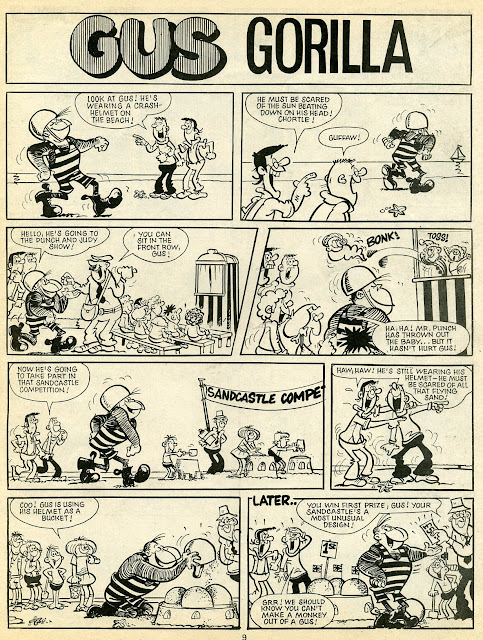 A LOOK AT COR!! STRIPS: IVOR LOTT AND TONY BROKE

Judging by the length of the run, Ivor Lott and Tony Broke was easily the most successful strip that originated in COR!! Not only did it survive COR’s!! merger with BUSTER but also continued there for many years to come and spawned a bunch of imitators in other IPC comics.

The series exploited the simple theme of class warfare between the haves and the have-nots, the former represented by Ivor Lott and the latter by Tony Broke. An offspring of wealthy parents, Ivor Lott was a spoilt brat who lived in luxury, treated his butler and servants like a slave driver and looked down upon other kids, Tony Broke in particular. Tony was a poor kid, often referred to as Riff Raff by Ivor. Mean rotter that he was, Ivor Lott usually came off worst in the end. His megalomanic ways often resulted in destruction of his Father’s property – mansion (Lott Hall), car, helicopter, plane, motorboat, etc. The punishment at the hands of Pater Lott was merciless and Ivor often got whacked in every imaginable way. A good deal of whacking also came from Ivor’s teacher. Together with Whacky and Patsy (of The Teacher’s Pet), he was one of the characters who suffered the most in COR!! – and deserved every single moment of it. Speaking of Pater Lott, he often sympathised with Tony who sometimes malevolently lent a hand in Ivor’s punishment.

The original illustrator was Reg Parlett. The feature (as well as Reg Parlett’s other work for COR!! and other comics in the end of the 60s onward) was a product of his adapting to the modern style of the 70s. In his interview for the Winter 1979 edition of GOLDEN FUN Reg Parlett said he had no trouble adapting, it had happened fairly naturally over a period of time.  The big change for him was that he no longer did his own lettering which he wasn’t particularly keen on. He also said he had probably been doing more actual artwork in the 1970s then he had ever before: in the old days he did everything himself – script, art, lettering, everything. In the 70s he was given scripts by IPC and had more time to devote purely to drawing then.

Ivor Lott and Tony Broke started off as a one-pager in the premiere issue of COR!!  In response to a very positive reader feedback, a few months into the run of COR!! the Editor began dropping hints about his intentions to promote the feature to two full pages. Starting from 20th March, 1971 (No. 42) he made good on his promises and the strip was given 1 ½ pages, then two full pages starting from 25th December, 1971 (No.  82). A further promotion took effect from the issue dated 22nd April, 1972 (No. 99) when the strip was moved to the centre pages and became a three-colour affair. Robert Nixon began drawing the odd weekly episode at about then.  Starting from 30th December, 1972 (No. 135) Reg Parlett handed over his illustrator’s duties permanently to Bob Nixon who remained in charge of the strip until COR!! folded (and for some time after merger with Buster). Terry Bave and Mike Lacey also contributed the odd episode in COR!!

Ivor Lott and Tony Broke made three front page appearances in full colour in COR!! issues dated 5th May 1973, 2nd June 1973 and 11th August 1973 (Nos. 153, 157 and 167). In his book The Comic Art of Reg Parlett Alan Clark writes that the characters were so popular that at the time of writing the book in the 80s there had been talk of a Christmas Annual devoted exclusively to Ivor and Tony. Apparently, this didn’t go beyond talk but the two favourite characters were cover stars in every single COR!! Annual from 1977 until 1986 and COR!! Holiday/Summer Special from 1976 until 1983.