The New Year issue introduced the second series of Cor-Medy Choice feature. In the Christmas issue of 1973 the Editor explained that the first series produced a strong response and proved to them that readers enjoyed choosing a new character for Cor!! so it was decided to run a new series in 1974. This time the candidate list was shorter and consisted of 6 new ideas. The feature ran for six weeks from the first issue of the year until the issue dated 9th February, 1974 (No. 193). Voting coupon was printed in the issue dated 16th February, 1974 (No. 194) and results were announced 6 weeks later in the issue dated 30th March, 1974 (No. 200).


The issue dated 30th March, 1974 (No. 200) was given a new look. The front page was again redesigned and both changes had to do with Gus. First, his familiar screaming face was re-drawn and moved to the right. Second, Gus Giggles feature was dropped and replaced with Gus Gags. A generous prize of £1 (in addition to the star, front cover billing) was offered to the sender of each cover joke published. The response must have been overwhelming and the quantity of material received was enough for two annual-type soft cover COR!! Books of Gags produced in 1976 and 1977. 200 issues old and still storming along!! – boasted the Editor in his special address on page 2:

Cor-Medy Choice No. 2 results were announced. The Editor chose to print total number of votes registered for each entry, confirming that the interest in the feature was indeed fantastic. This time there was not just one but two winners - The Spectre Inspector and Wally’s Weirdies, both to survive merger with Buster that was a little more than 2 months away. The Gasworks Gang enjoyed an excellent part-full-colour treatment that week – a very nice and unusual episode involving play with colours.

Easter issue dated 20th April, 1974 (No. 203) was the last in which new characters were introduced. Adding new strips to a comic that was about to go under sounds like a daft idea, but there wasn’t much of a choice because two of the three newcomers were winners of the Cor-Medy Choice series that must have been designed and launched before the decision to end the paper was taken. The third was Baron Von-Bonkers the Birdman – a very-amateur looking experiment IMHO and the motives for its inclusion are impossible to understand. 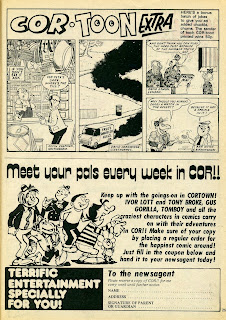 From retrospect we now know that the paper was living its last months, but looking at the early issues of 1974 one can hardly see signs of decline. Sales, however, must have been dwindling. In the last attempt to keep the comic afloat the editors included a large ordering coupon with the comic’s favourite characters. There were nine coupons all in all, the first one in the issue dated 22nd December, 1973 (No. 189) and the last one in the issue dated 11th May, 1974 (No. 206), by which time the writing was on the wall and the days of the comic were numbered.

In the last weeks signs of decay were beginning to show more prominently – Hire a Horror resorted to reprints of a couple of early Reg Parlett episodes, editors turned a blind eye on some artists (Trevor Metcalfe and Robert Nixon in particular) signing their artwork and some of the sets started looking a bit rushed or were ghosted.


The infamous Exciting News for all readers was announced in the issue dated 15th June, 1974 (No. 211). The last edition of the paper came with a beautiful cover and Gus’s screaming head was back on the left-hand side of the page where it always belonged. A number of characters (the bloke from Gus, Dr. Rat, The Gasworks Gang, Jelly Baby, Teacher’s Pet, Micky Madd’s dog) bid farewell to the readers in one way or another. And that was the end of COR!!


That week’s BUSTER also broke the news about the forthcoming merger to its readers. The news was on the front cover and occupied one full page inside:

The Slimms landed in the pages of Whizzer and Chips. Hire A Horror found itself in SHIVER & SHAKE, albeit only for a short span of 10 weeks. Willy Worry ended up in WHOOPEE! where it continued until well into 1978. Jack Pott resurfaced in 1979 in JACKPOT and then migrated to BUSTER after the two comics merged in 1982.

This time there were four features that weren’t familiar to regular readers of the weeklies; they included two comedy strips: Give a Dog a Bone and Aqua Lad, both reprints from the early Whizzer and Chips where the former was drawn by Graham Allen and the latter by Terry Bave, and two adventure features: The Spectacular Adventures of Willie Bunk, again from the early Whizzer and Chips where it was illustrated by the universal and prolific Frank McDiarmid, and “Young” MacDonald and His Farm by Ron Turner who contributed numerous adventure serials to WHIZZER AND CHIPS in the 70s. I may be wrong but “Young” MacDonald and His Farm looks like new material drawn especially for COR!!  More stories about Young MacDonald appeared in a few later editions of COR!! specials and annuals.


Annuals were usually released in the end of Summer or early in the Autumn, so COR!! 1975 Annual appeared after the weekly had already folded. It cost 80 p. and had 160 pages. Here is the line-up of characters: Chalky (some in colour), Hire a Horror (some in colour), Jelly Baby (some in colour), Gus Gorilla (in colour), Jasper’s Money Maze (maze page), Teacher’s Pet (some in colour), Wonder Worm, Ivor Lott and Tony Broke (some in colour), The Spectacular Adventures of Willie Bunk (4 stories, 4 pages each), Football Madd, Jack Pott, Aqua Lad, Andy’s Ants,  Give a Dog a Bone, Night Mare, Val’s Vanishing Cream,  Willy Worry, Tomboy, The Gasworks Gang, Whacky, Chip, Super Spook (adventure, 6 pages), TEASE BREAK feature, Tricky Dicky, Swopper Stan, Who’s Afraid of the Big Bad Wolf (some in colour), The Slimms, Rat-Trap (5 pages, Christmas story), Fiends and Neighbours, Gus Giggles, Helpful Hettie and Jasper the Grasper.

Like in the 1974 Summer Special, there were many reprints of Aqua Lad, Give a Dog a Bone and especially The Spectacular Adventures of Willie Bunk from the early WHIZZER AND CHIPS. The only unfamiliar name to readers of the weeklies or the 1974 COR!! Summer Special was Super Spook. The tale was about a mighty muscular miner Jeremiah Smith who was crushed to death in a mine beneath a mountain during the Gold Rush while trying to save other people. His selfless courage and bravery was rewarded by the gift of eternal life and supernatural powers such as flying. He travelled the World wearing a silly skin-tight costume and doing good deeds as Super Spook. I am not sure if it’s a reprint but some panels look cropped so it may very well be one.


Some of the regular sets from the weeklies illustrated by their usual artists were particularly nice. Robert Nixon did a marvellous job on his Hire A Horror and Ivor Lott and Tony Broke pages in the annual both in colour and monochrome:

COR!! Holiday Specials and Annuals continued well into the 80s. I intend to cover them on this blog after I finish the overview of individual strips in the comic (which may take quite a while…)
Posted by Irmantas at 11:25 AM