Buyers of the 1974 New Year edition of Shiver and Shake should have immediately noted the difference because the number of pages was cut by four (from 36 to 32), formally at the expense of Shiver section. I say formally, because regular features from the comic’s spooky Shiver section (such as Webster, The Hand, Grimly Feendish and Sweeny Toddler) started migrating back and forth between the two sections of the comic. At the same time, Frankie Stein, the paper’s most popular feature from Shiver section, was given three full pages (in fact, the first Frankie Stein three-pager was in the Christmas edition the week before). The changes called for some serious space re-arrangement. Damsel in Distress and Wizards Anonymous were discontinued from the second issue of the year; Cackles and Creations Runners Up features ended up sharing one page: 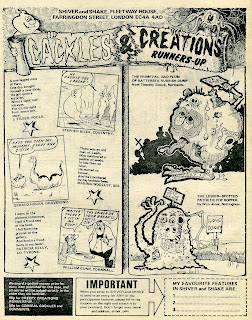 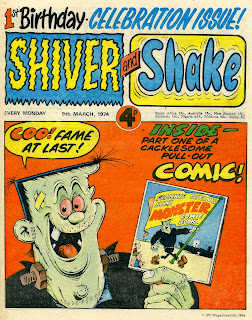 The next major change took effect starting from 1st Birthday Celebration Issue (No. 53 dated 9th March, 1974) when Frankie Stein was promoted to the front page, permanently ousting the lovable spook and tusker pair. There was no room for The Match of the Week left in the revamped paper – one of the comic’s highlights made its last appearance in issue 52 (2nd March, 1974) the week before. The first four editions of Frankie’s front cover stardom were celebrated with a pull-out booklet entitled Frankie Stein’s Mini Monster Comic Book. In those first front-cover editions Frankie Stein came close to taking the comic over: he had the front cover and as many as three inside pages in issues 53 – 55 (that’s in addition to the front and back pages of the mini book in issue 53) whereas in issue 56 he had the front cover, two inside pages and all eight pages of the minibook devoted to him. Not to mention regular appearances in the Shiver Givers feature. Later on things settled down and Frankie’s weekly adventures were restricted to the front cover and two inside pages. Bob Nixon did an excellent job illustrating the feature. Here are some nice covers from the period: 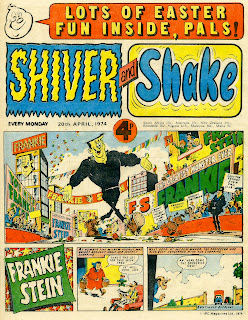 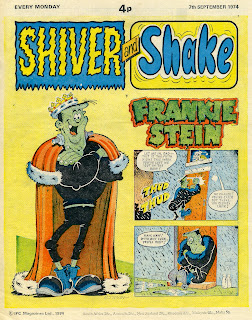 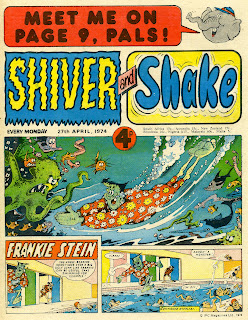 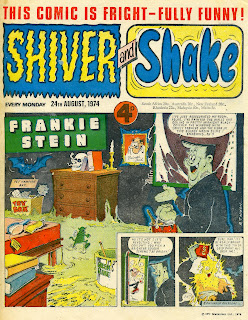 Pages of the pull-out booklet tend to be missing in Shiver and Shake issues 53 – 56 (March 9th - March 30th, 1974) but are well-worth seeking out because in addition to Frankie Stein they contain some nice mini-pin-ups of popular characters from the paper (Grimly Feendish, The Innkeeper, freaks of Horrornation Street and The Ed from Shiver Givers)... 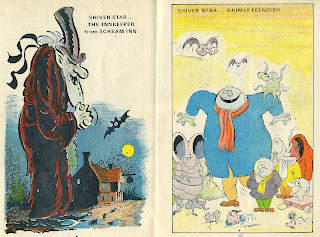 ... and as many as 4 pages of Ken Reid’s art – two Mini Monsters and two pages of Your Horrorscope: 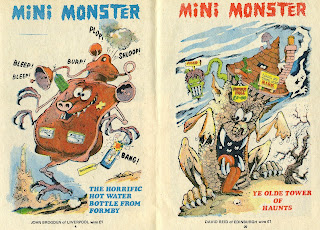 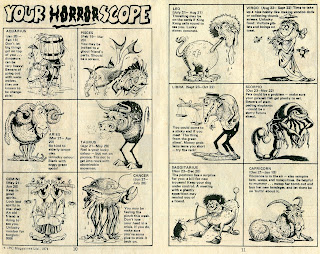 The usual SHAKE section with the full-colour Shake strip on the cover disappeared in issue 53 to make room for the Frankie Stein pull out booklet but when it resumed in issue 57 it wasn’t as it used to be. The Editors probably decided to stop taking the two-comics-in-one gimmick seriously because the invitation to remove SHAKE section from the comic was gone, as was the date and IPC copyright notice on the cover of the section and Shake’s head with the speech balloon containing the weekly Elephant Joke. Here are both versions of SHAKE section front covers side by side: 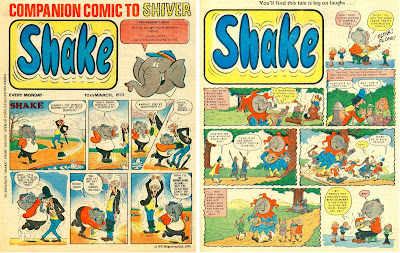 They must have forgotten to allocate a new slot for Elephant Jokes because although Shake still trumpeted they were his favourites and encouraged readers to send them in, the jokes didn’t resume until issue No. 63 (May 18th, 1974) when the layout of Shake a Leg page was reshuffled to accommodate all 3 reader participation features (Mirth-Shaking Inventions and answers, Jokes and Trunk Call (letters section); here’s an example: 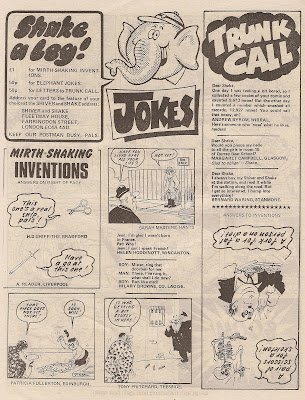 In July of 1974 Shiver and Shake fell victim to strike action by IPC’s printers and no issues of the paper came  out in the four weeks of the month. No explanation of the reasons that led to the interruption was offered when publication resumed in August. I find this rather strange, especially bearing in mind that earlier the editors saw it necessary to explain the absence of instalments of a weekly feature (Eagle Eye) by publishing these messages:

The gap in July is confirmed by two clues: one is the numbering of Creepy Creations on the back page (The Monster Map of England and Wales in the issue dated June 29th, 1974 is No. 69, whereas No. 70, The Rumbling Raspberry from Rustington, appears in the issue with the cover date of August 3rd, 1974, this suggests there were no Creepy Creations on the four dates in between), and two is the successive episodes of Menace of the Alpha Man (in the issue dated June 29th, 1974 the caption under the episode urges not to miss the exciting final instalment of the story next week, and that final episode can be found in the issue of August 3rd, 1974). Hence, although the paper continued for 83 weeks, only 79 weekly issues were published.

As a possible compensation, the first issue after the interruption announced that two super new stories of the horror comedy variety were to start next week, they were Creepy Car and The Ghoul Getters. Alongside with the paper’s long-running top features Frankie Stein, Scream Inn, Webster and Lolly Pop and one recent addition (Blunder Puss), the two new stories eventually joined the lineup of Whoopee! when the two comics merged.

Funtastic news was broken in the issue with the cover date of 5th October, 1974 and the first combined edition with the clumsy name of WHOOPEE! and Shiver & Shake appeared a week later. Surprisingly (for me), neither Grimly Feendish nor Sweeny Toddler made it to the “new” magazine. Both entered the Pick-A-Strip competition (alongside with Shiver and Shake’s Desert Fox, 4 strips from Whoopee’s original roster and one new strip) that ran in the first combined issues of WHOOPEE! and Shiver & Shake. Readers voted for Sweeny Toddler. That's how the strip became a regular in WHOOPEE! and eventually turned out to be the longest survivor of Shiver and Shake’s original characters.


WHOOPEE! AND SHIVER & SHAKE continued under the title for a little over a year until 18th October, 1975 before the Shiver & Shake part was dropped all together. Shiver and Shake Holiday Specials appeared until 1980 and the last Shiver and Shake annual was published in 1985 (cover dated 1986).