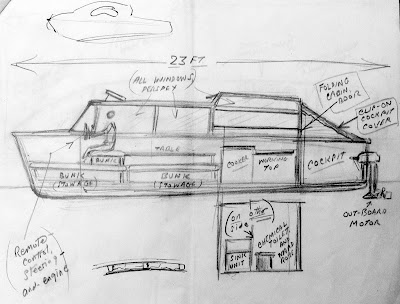 Ken Reid was a devoted boating fan. He bought his boat, MISS BASSETT, in the summer of 1967 with the extra money that he earned working for Odhams. Ken once wrote that he purchased it, in complete ignorance, “second hand and immaculate”, “at a giveaway price due to emigration” from a genial young “Johnnie” who neglected to mention that the boat had a few major faults, such as an unpredictable outboard motor that often stopped in an enigmatic manner and nothing, not even a marine engineer, could induce it to start again until it had simmered down to “cold starting”. The seller, “who made the supreme sacrifice as favour” also omitted to explain that the generator didn’t work, so Ken’s navigation lights consisted of two candles, each placed in a jam jar... :)

Ken spent a lot of his time aboard Miss Bassett moored at Lymm village moorings in Cheshire, and used it as residence and studio in the warm months.

As a boater, Ken was a regular reader of Practical Boat Owner – a specialized magazine dedicated to all things boating. In April 1969 he came across a culinary article about preservation of cockles, written by a Mrs. Gillian Hibbs from Havant, Hants. Ken was a fan of mussels, so he contacted Mrs. Hibbs via the magazine and asked her to write a similar article on his favourite sea food. Mrs. Hibbs obliged, and her article was printed in the May issue of the magazine. Mrs. Hibbs liked Ken’s humorous and vivid writing style so she sent him a letter in reply, and the two corresponded for a while. Ken assured Mrs. Hibbs that the moment “mussel mania” sweeps the country once again in the late autumn, he shall get cracking with bottles, pepper and vinegar with rapturous abandon along the lines suggested by her. He continued by saying that:

Mrs. Hibbs suggested that Ken got in touch with the editor of Practical Boat Owner who she thought might possibly be interested in his writing style. Ken sent the Editor a humorous article on one of his many boating experiences and an illustration showing him proceeding through a mile long tunnel like a billiard ball, cannoning from one wall to the other.

The magazine replied that, unfortunately, the story wasn’t for them because their material had to be essentially practical, useful, helpful and instructive. They said the illustration was too horrific for them – they were for a gentler humour, “which will make Mother laugh but not make her resist Father’s persuasive attempts to make the family take up boating”.

Ken was never short of ideas, so he immediately approached the magazine with another illustrated letter which the magazine accepted and printed in the readers’ letters page of their December 1969 issue, paying Ken a fiver for his contribution. Here is the cover of the magazine: 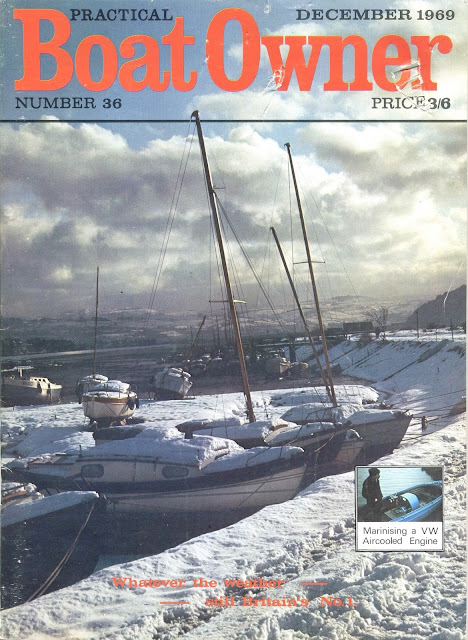 … and here is Ken’s letter: 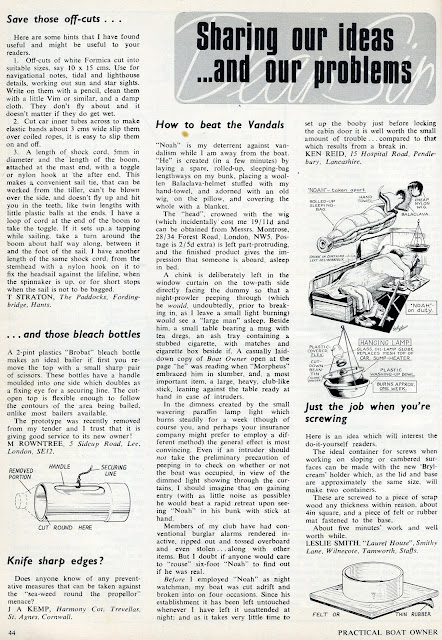 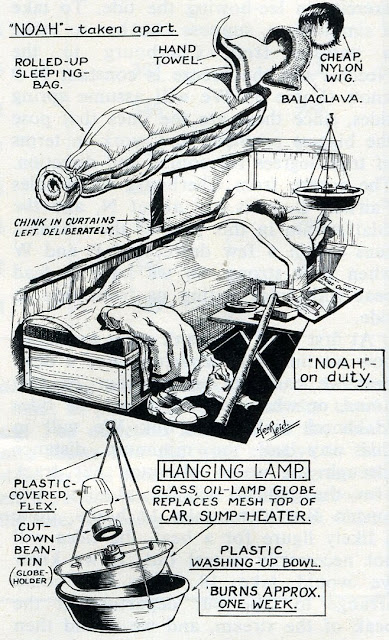 In December 1969 Ken sent another letter to Practical Boat Owner with an article and an illustration of “Mini-derrick” (in pen and wash). Ken’s notes say that the magazine accepted the article and the illustration, and sent him a check for his contribution. If that was the case, it should have been printed in one of the issues in the beginning of 1970 but the dealer who sold me the number with 'Noah' article couldn’t find anything resembling a mini derrick in any of the issues, and he said he looked very closely; maybe the editor of Practical Boat Owner decided not to print it after all…
Posted by Irmantas at 6:20 AM 4 comments: