A LOOK AT SHIVER AND SHAKE STRIPS: FRANKIE STEIN (PART ONE) 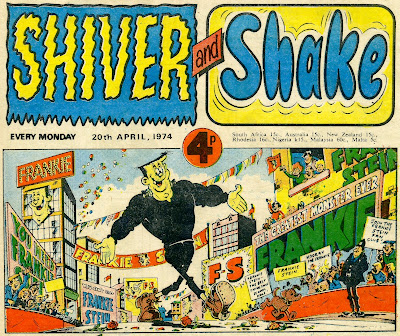 Frankie Stein was a big star of SHIVER section. His strip was the first that the young reader would find on opening a copy of the paper. Frankie happens to be one of my favourite characters in British comics and half-way through writing this piece I realised it may become too long, so I decided to split it and do two posts instead.

The editors introduced Frankie in the first issue of SHIVER AND SHAKE without bothering to explain his origins, and few readers recalled that the character had made his debut nearly a decade ago in the 4th issue of Wham! dated 11th July, 1964, alongside with his maker Professor Cube who hoped to create a little pal and a real live playmate to his son Micky but the scientific exercise went radically wrong. Crazy and occasionally violent adventures of Frankie Stein the friendly monster, Professor Cube and his son Micky continued in Wham! for more than three years totalling up to 142 weekly episodes, the vast majority illustrated by Ken Reid. Towards the end of the run of WHAM! the appearances of Frankie Stein became less frequent and finally ceased altogether after Wham! issue No. 166 dated 19th August, 1967. Thus, Frankie Stein’s new debut in the pages of SHIVER AND SHAKE was after a five-and-a-half year break. Below is a representative example of the old version of the strip from WHAM! No. 109 (17th March, 1967) in which Frankie reunites with Dad and Micky after a long stay away from home: 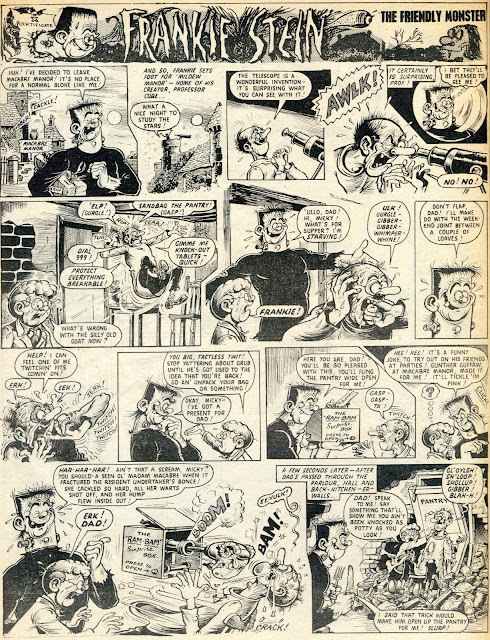 Although Mr. Reid was around and working for IPC at the time, the illustrator’s duties were assigned to Bob Nixon. Maybe it was because Mr. Reid was too busy drawing other features, or perhaps the editors believed readers would find Bob Nixon’s cuddly new Frankie more appealing than Mr. Reid’s old-school diabolical version – we’ll never know for sure. Whatever the reasons, Mr. Nixon did an excellent job as the illustrator and I have no doubt that his version of Frankie Stein is deeply ingrained in the memories of many fans who followed Frankie’s adventures in the 70s and beyond.  Here is the first episode of the new series from SHIVER AND SHAKE issue No. 1: 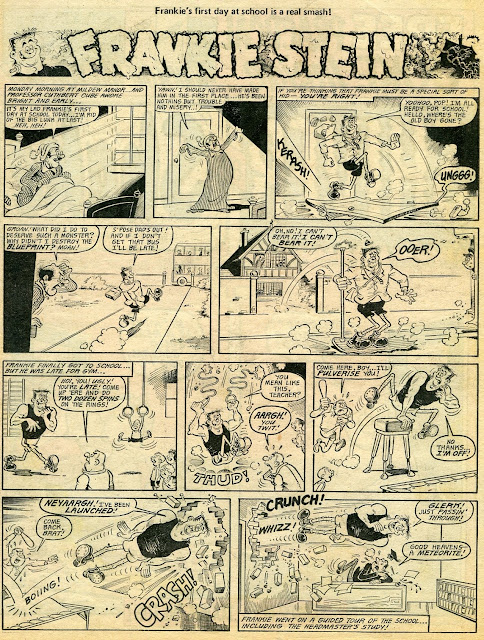 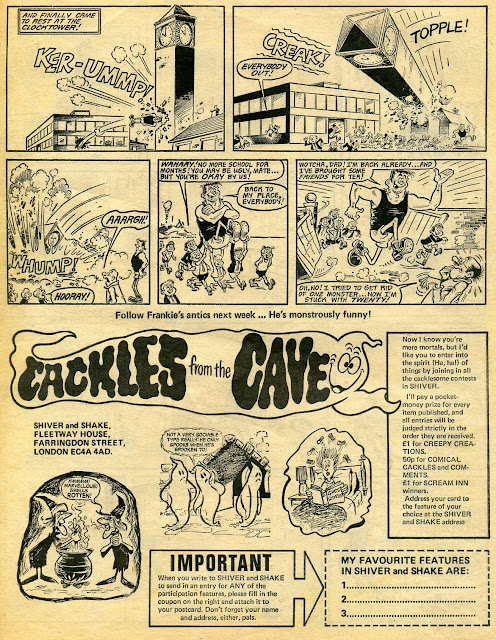 New artist wasn’t the only change: character lineup of the revamped feature was ‘optimised’ by dropping Prof. Cube’s son Micky who used to be a regular in WHAM! series. For truth’s sake it has to be noted that Micky was a secondary character anyway and didn’t have a real role to play in the plot because the conflict was usually between Frankie and Prof. Cube. It wasn’t uncommon for Micky to be absent from weekly WHAM! episodes; as a matter of fact, in the last 16 episodes in WHAM! Micky is seen only once!

Frankie Stein and his Dad Professor Cuthbert Cube lived at Mildew Manor in the village of Puddleditch. They were a pair of truly weird characters: Frankie was a dumb but lovable creature with a tiny brain and a huge muscular body who didn’t know his own strength; Professor Cube was forever sorry for inventing Frankie and employed his imagination and scientific talents devising wicked schemes to get rid of his son. Below is an example from issue 23 (August 11th, 1973). I may be imagining things, but to me it looks as if Mr. Nixon got some outside help on some of the panels in the top half of the first page: 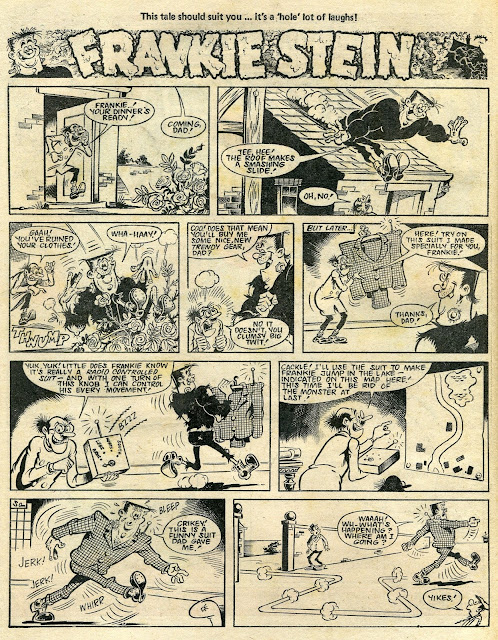 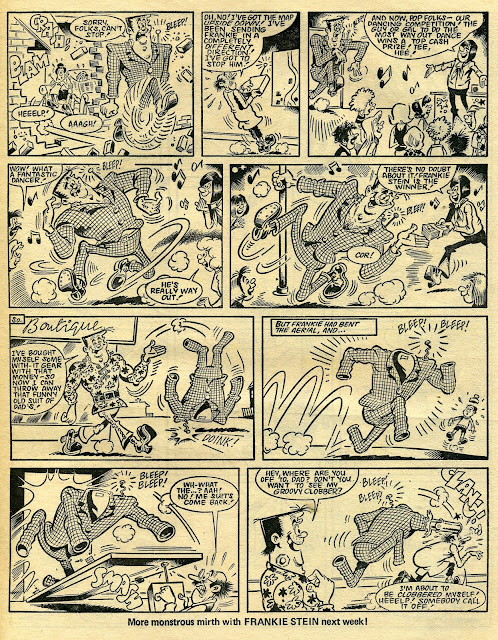 As a character, Frankie is plain and simple: he is kind-hearted and always in a jolly enthusiastic mood, but naïve and blissfully unaware of his own hideousness. Despite Prof. Cube’s never ending diabolical plots, Frankie has warm feelings towards Dad and the thought that his inventor might be trying to get rid of him hardly ever crosses his mind. Pretty much a clueless dimwit.

Professor Cube’s personality is by far more complex than Frankie’s. Strange as it may sound, but he tries hard to be a good parent: he buys Frankie’s groceries, sees him off to school, gives him pocket money, takes him to the Zoo, the circus, the pictures, the seaside and even on overseas holidays, mends his shoes, tells him bedtime stories, bakes his birthday cake, etc. But Professor Cube is forever on the verge of a nervous breakdown because Frankie is a glutton who eats him out of house and home, and a clumsy brute who costs thousands in repair bills. Therefore Prof. Cube’s mind is always busy devising cunning and violent schemes to get rid of his son, and he is unscrupulous in the choice of his means. Everything goes – explosives, bombs, landmines and all sorts of Professor’s own ingenious inventions – mechanical gadgets, potions, concoctions, etc. Prof. Cube tries to get rid of Frankie by enlisting him in the army, shipping him off to Timbuctoo packed in a box, turning him to the Zoo as a ‘Wild Man’, pushing him off a train going at full speed, getting him a job as a stuntman, putting him into orbit around the Earth, sending him off to cannibals’ island, transporting him to the past with the aid of a time machine, setting Frankie up with a female robot and switching her to nag-mode in hope she will drive Frankie out of town and even kidnapping Shiver artist to take control of that week’s story. Needless to say, Dad’s schemes always misfire and turn against him in the form of property damages or physical suffering. The episode below is from issue No. 46 cover-dated January 19th, 1974: 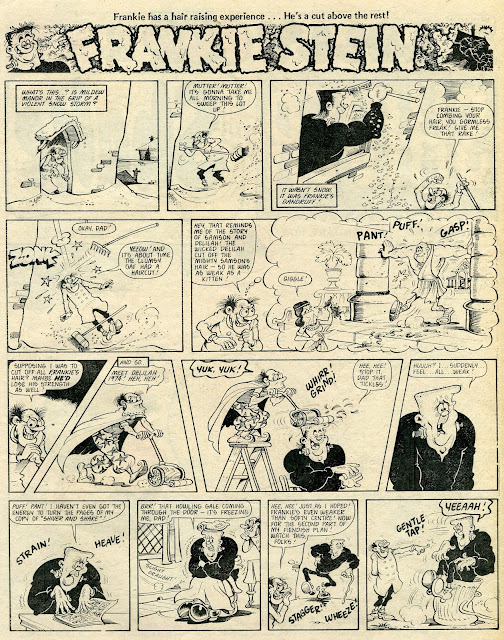 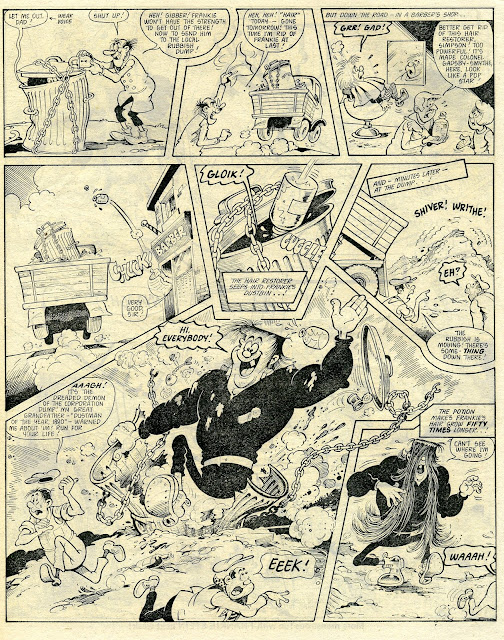 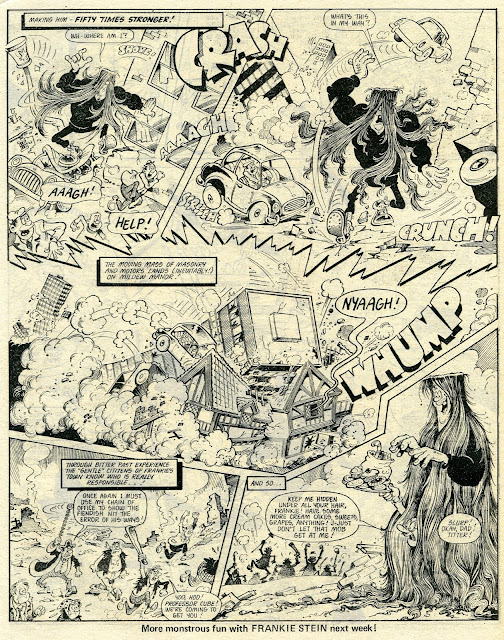 The paradox is that most of Prof. Cube’s misery comes from his efforts to do away with Frankie. If it weren’t for his failed mad schemes, Dad would only have to put up with Frankie’s gluttony, his habit of forgetting to use the doors and breaking through the walls too often, and being a general embarrassment to Dad. Misfired schemes, however, push Prof. Cube deeper into despair and frustration because they often result in damages of a grand scale, destruction of Mildew Manor and Professor Cube’s bodily injuries. And still, Prof. Cube is torn by dual emotions of hate and remorse for being so mean to Frankie, as can be seen in this episode in issue No. 56 (March 30th, 1974) where Professor Cube speaks openly about his feelings: 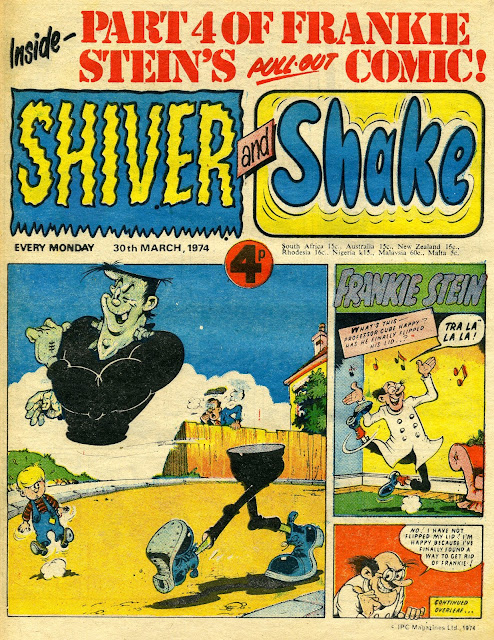 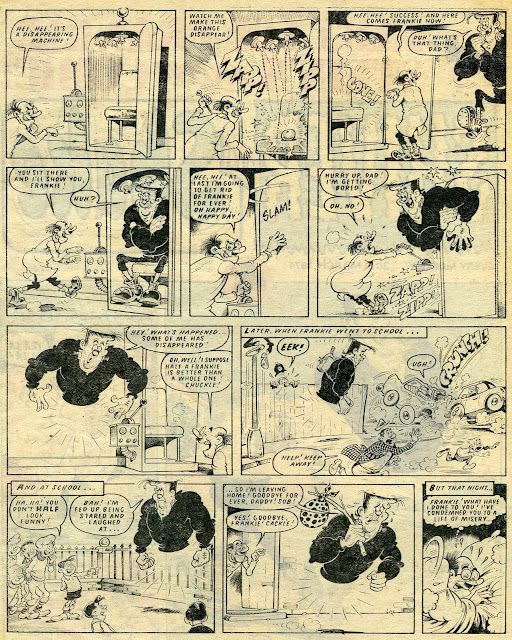 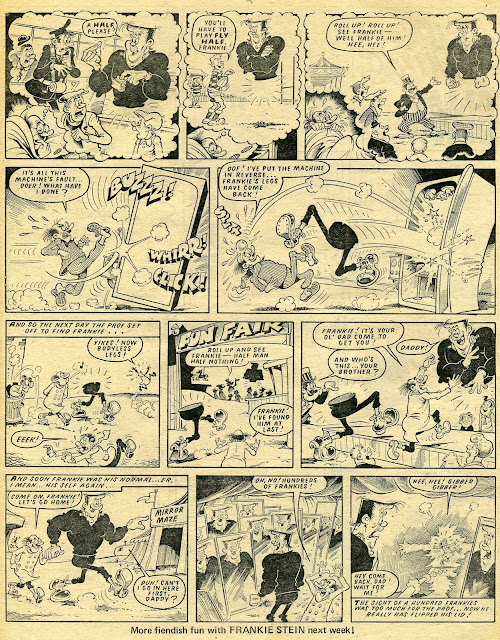 Come back soon for Part Two.