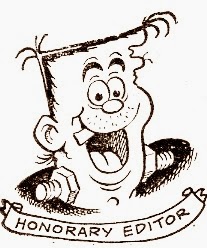 In case you didn’t know, in the mid-70s Frankie Stein was the big star in WHOOPEE! - another IPC comic of the time. Originally from WHAM! comic of the mid-60s, the character was revived in the short-lived but excellent SHIVER AND SHAKE and found himself in WHOOPEE! when the two titles were merged in 1974. I wrote a couple of detailed blogposts on Frankie Stein in my SHIVER AND SHAKE series, you can revisit them HERE and HERE.

When preparations to launch MFC took off in 1975, Frankie Stein was at the pinnacle of his stardom so IPC editorial staff probably decided he had become too big for just one comic and came up with an idea to capitalise on his fame by nominating him ‘honorary editor’ of their new paper with horror comedy as the main theme.

Frankie Stein made his editorial debut on page two of the first issue of MFC, welcoming his fans with a special message. The drawing was by Robert Nixon, who was in charge of the character in Whoopee! A cropped version of this drawing was later reused a few times in Frankie Stein’s editorials and elsewhere, as you will see later on in this post. Speaking of Frankie Stein’s messages, they were a regular feature throughout 1975 and ran nearly every week until issue 22 (8th November, 1975). After that they disappeared until the Holiday Season of 1975 and can be found in issues 28 and 29 (20th and 27th December, 1975). The last one ever was in the second issue of 1976 (No. 31). The messages were Frankie Stein’s rostrum for promoting various fun features in the current or the next week’s issue. Starting from issue 4 they usually appeared on Frankie’s Diary page and sometimes included a ‘Frankie-type joke’. Here are some examples: 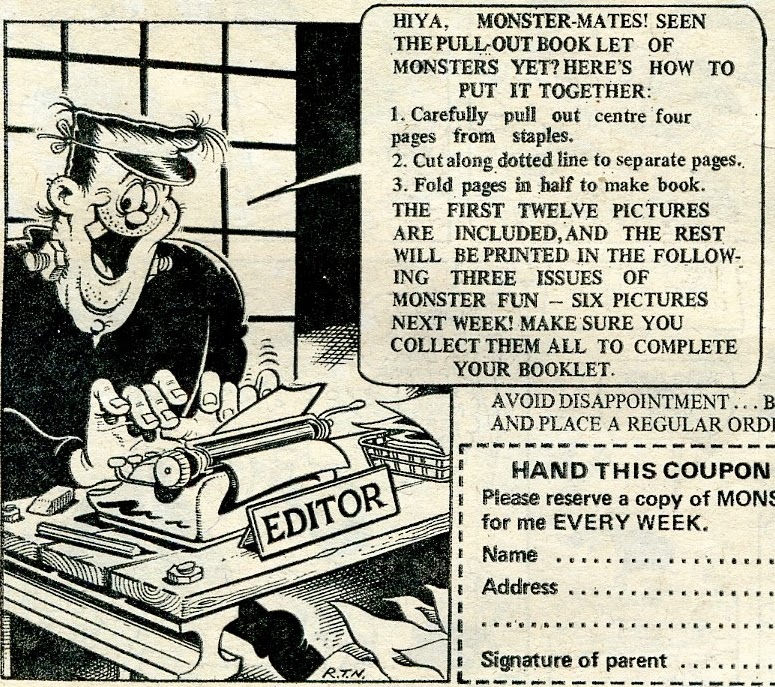 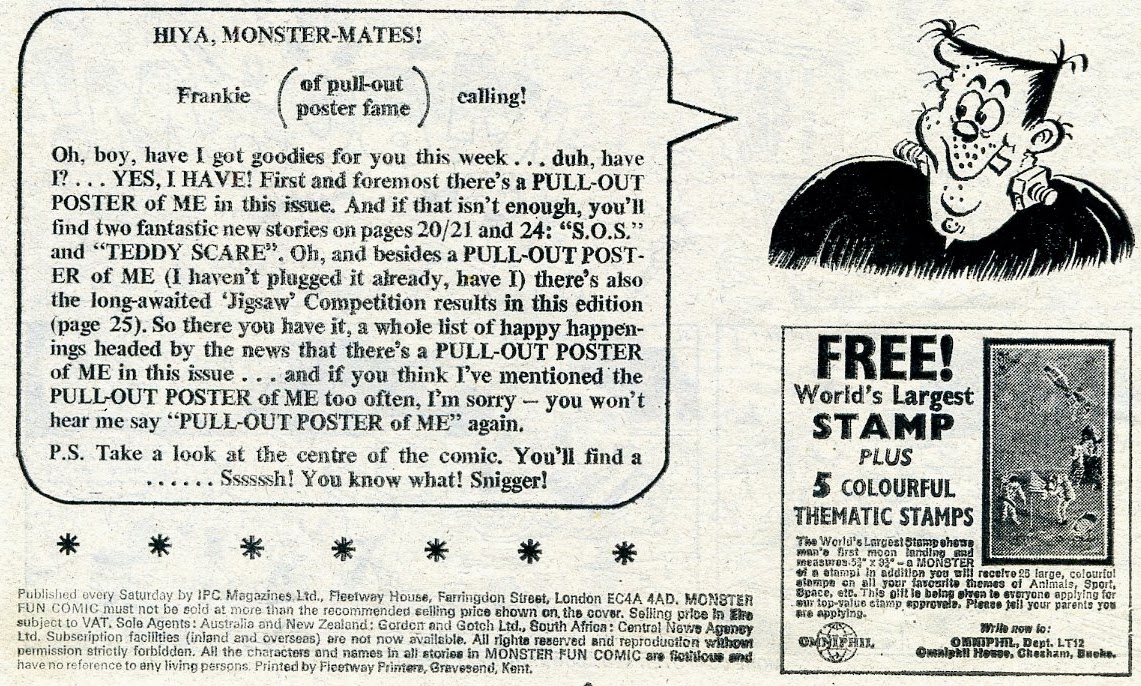 Being the big star that he was, Frankie Stein made front cover appearances in issues 9, 29 and 48: 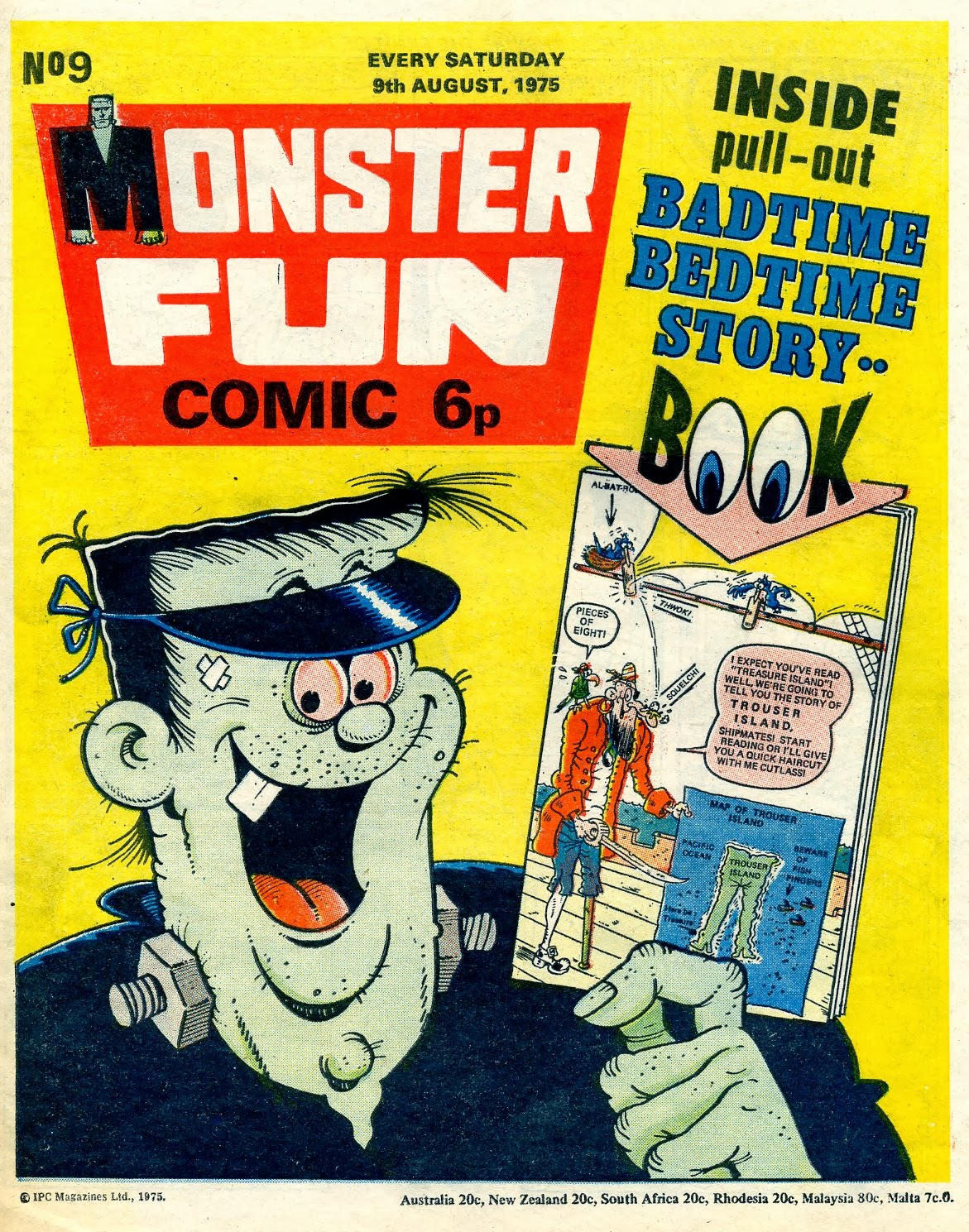 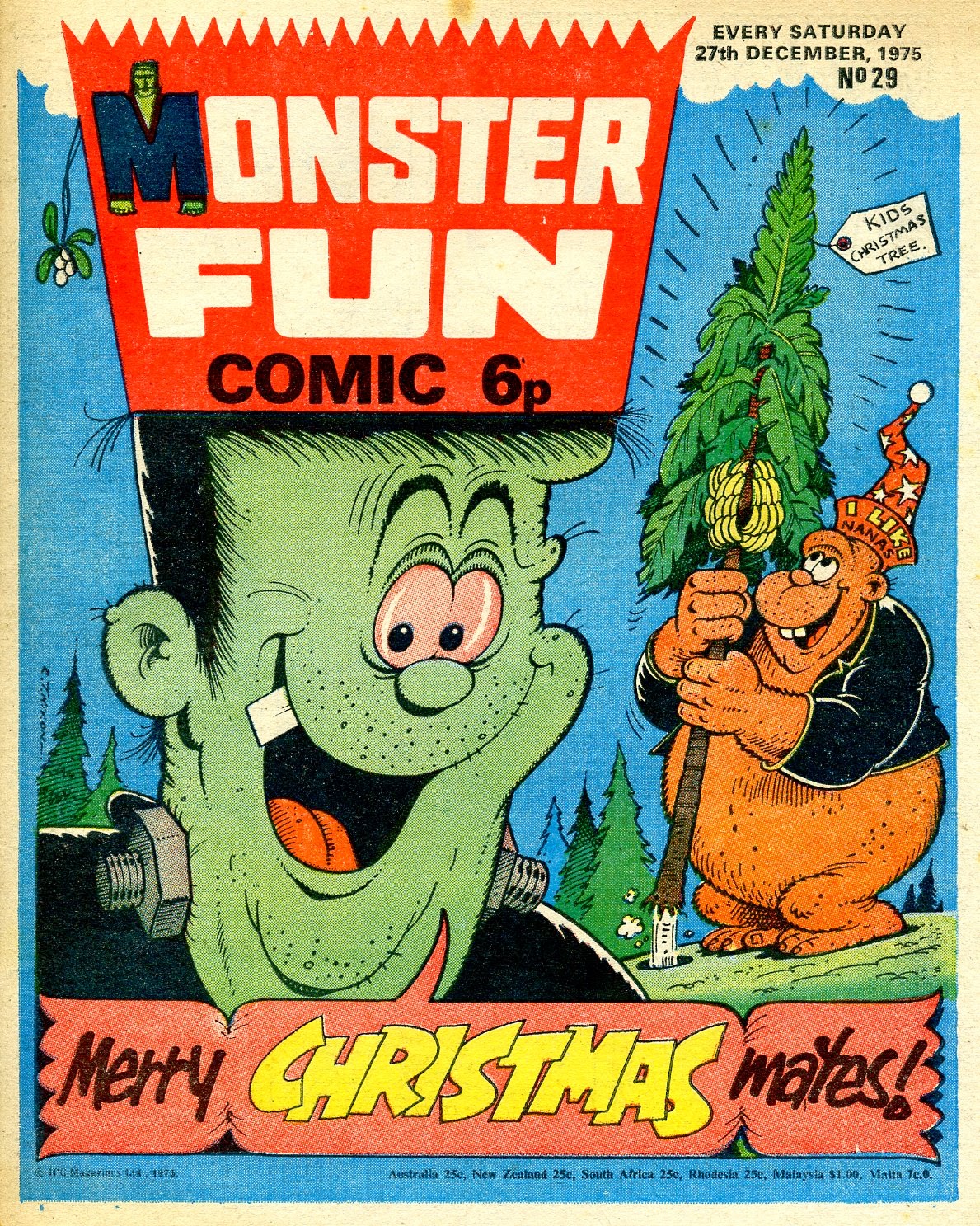 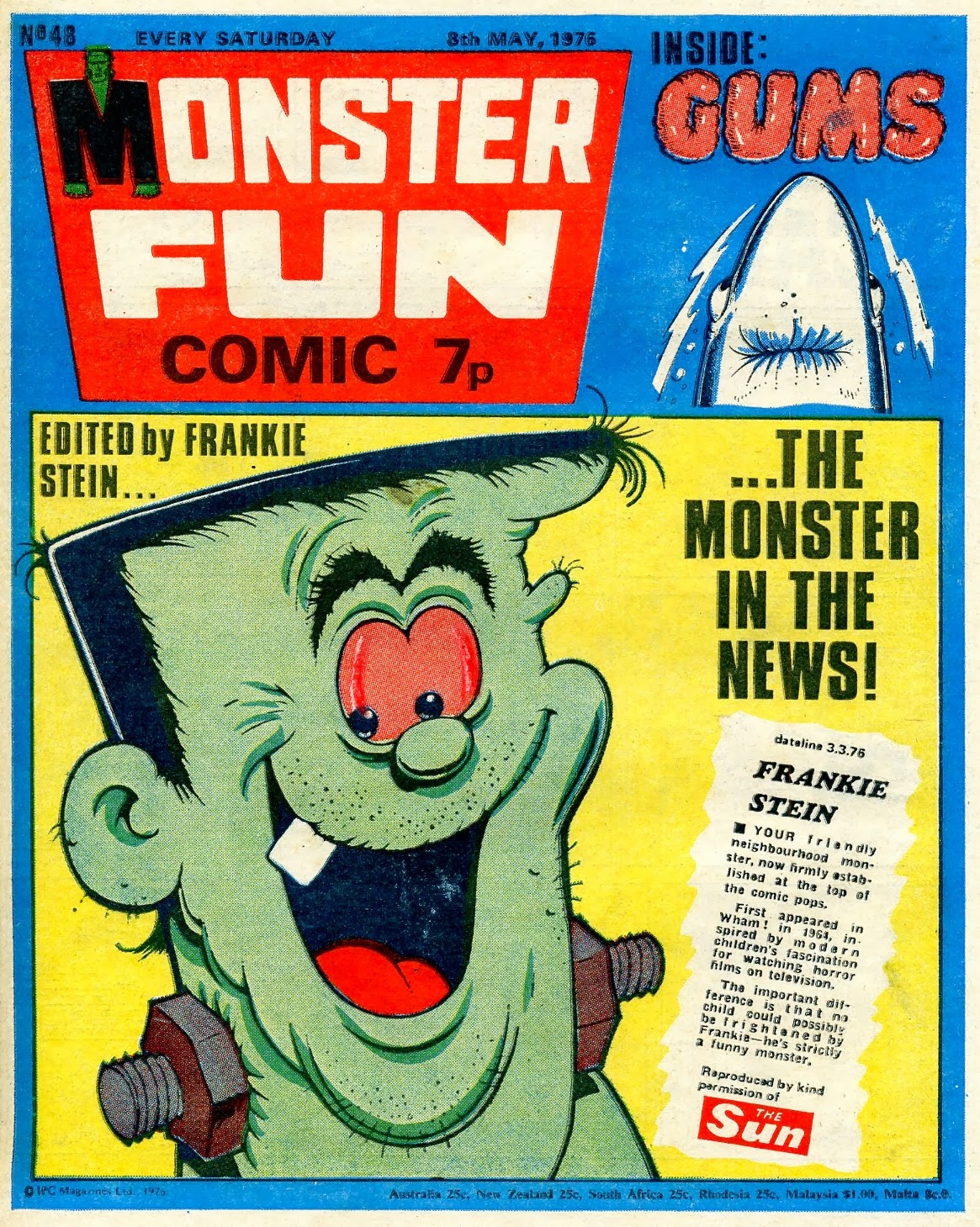 There were also instances when his mug was in the top right corner of the front page beside MFC logo, bellowing special messages such as these: 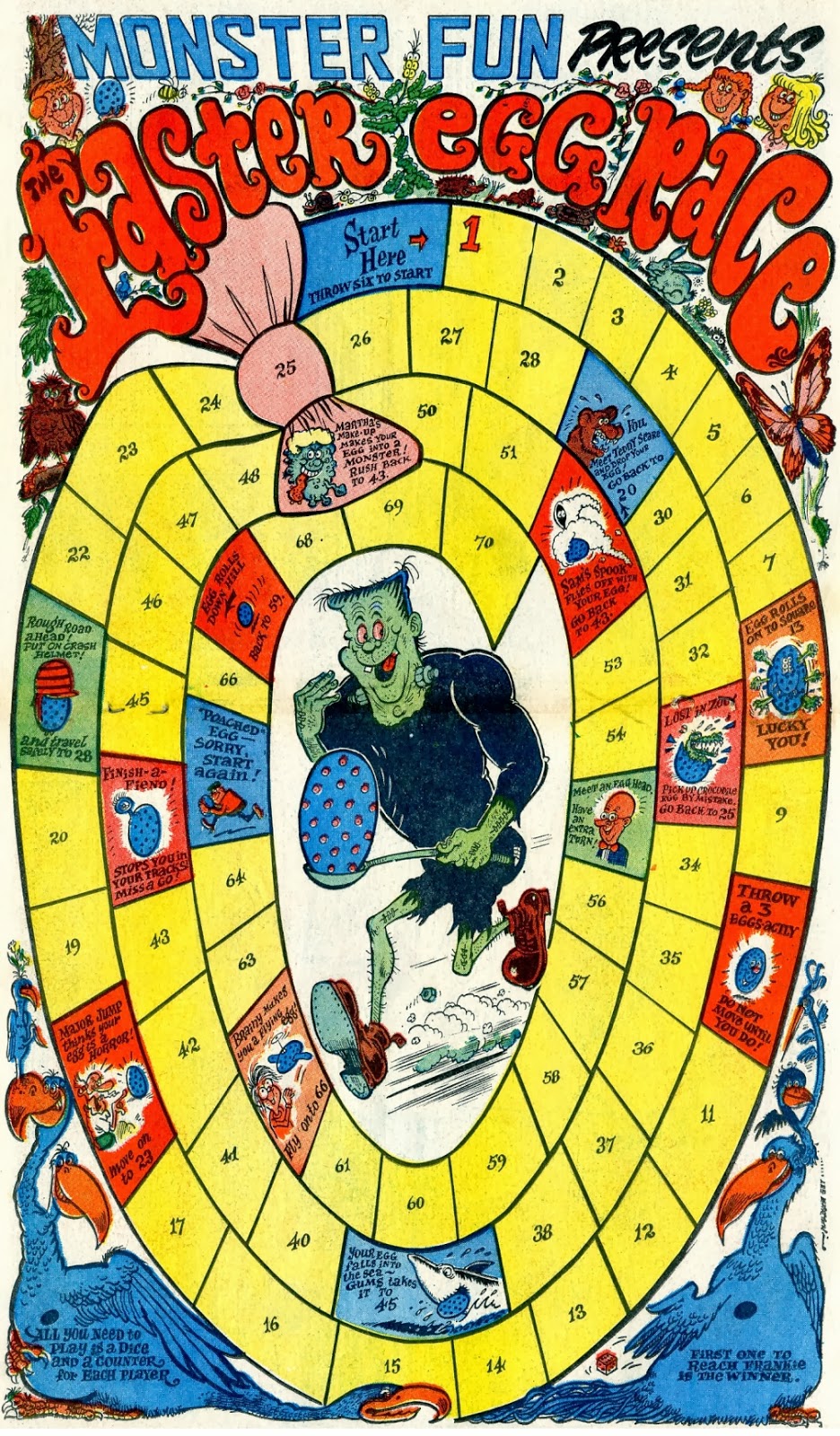 Frankie Stein appeared on several pull-outs: he received his own poster in issue 20 and was the dominant figure in Frankie’s Monster Mountain pull-out game (No. 29) and Monster Fun Easter Eggrace Easter pull-out game (No. 46). Frankie’s pull-out Book of Monster Gags in No. 49 carried his name on the front cover but otherwise had nothing to do with him. Frankie Stein was also one of the characters whose cut-out badge was offered in issue 22.

Let’s take a look inside the paper and see how the Honorary Editor was represented there.

Frankie had two strips of his own in MFC – Freaky Frankie and Frankie’s Diary, both ran concurrently and were illustrated by Sid Burgon. Freaky Frankie was a simple newspaper-type strip without speech balloons, usually consisting of three panels. Check out some examples below. The strip first appeared in issue 14 and continued regularly until issue 42 (27th March, 1976). Later on it appeared only occasionally and the last one can be found in No.  71 (16th October, 1976).

Frankie’ Diary was more interesting. It started in MFC No. 2 under the headline Frankie’s Own Freaky Fun Page, then continued without a headline until issue 12 (the space at the top of the page was usually occupied by Frankie Stein’s messages; in issue 7 the page was headlined Frankie’s Page and the headline Frankie’s Diary was first used in No. 8, only to be dropped again a week later). It then took a break until No. 20 and from that issue till the end of the run the page came to be known as Frankie’s Diary. The episode in issue No. 20 is also notable because it was the only one drawn by Robert Nixon. Here is the first set from MFC No. 2 and Bob Nixon’s set from No. 20: 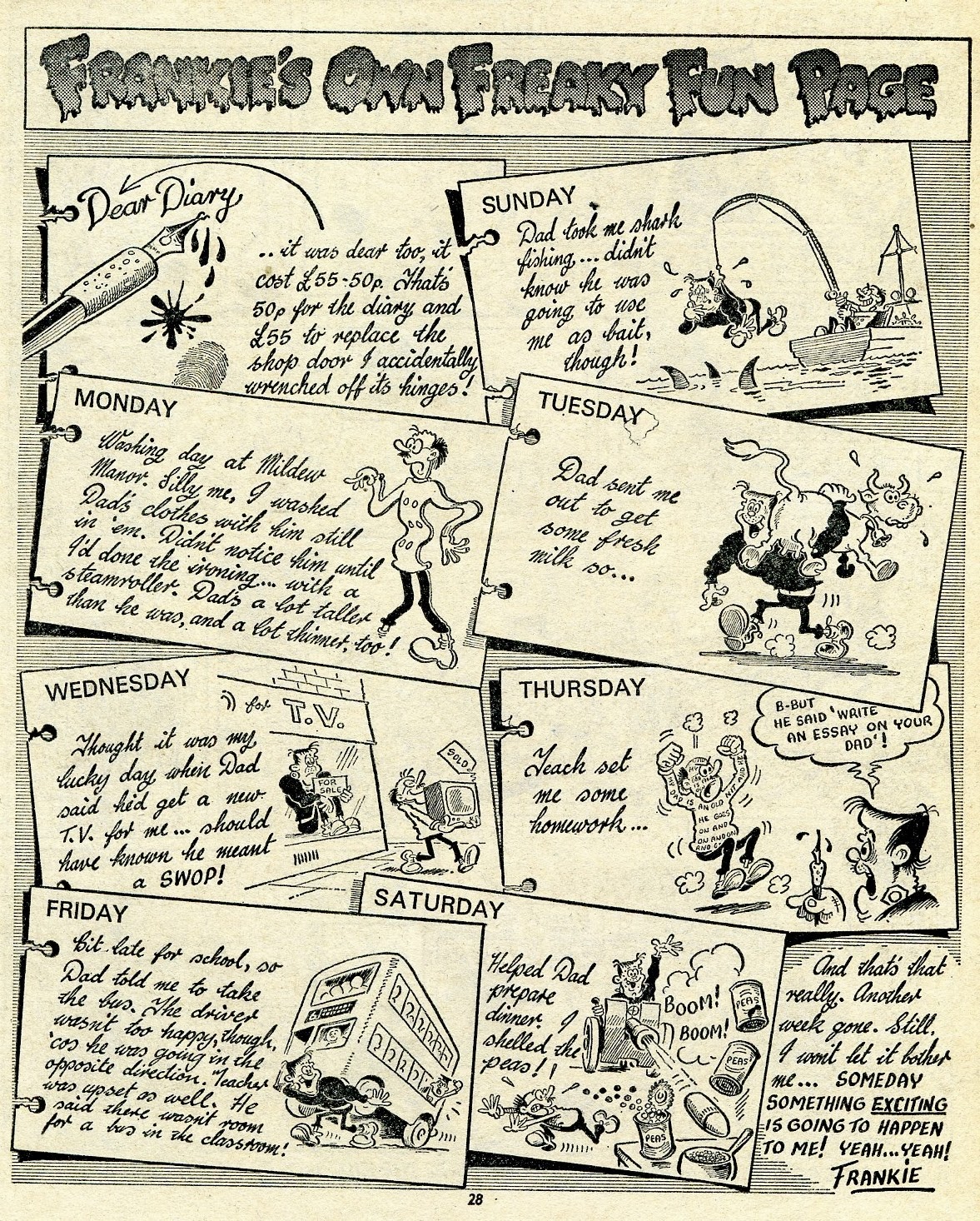 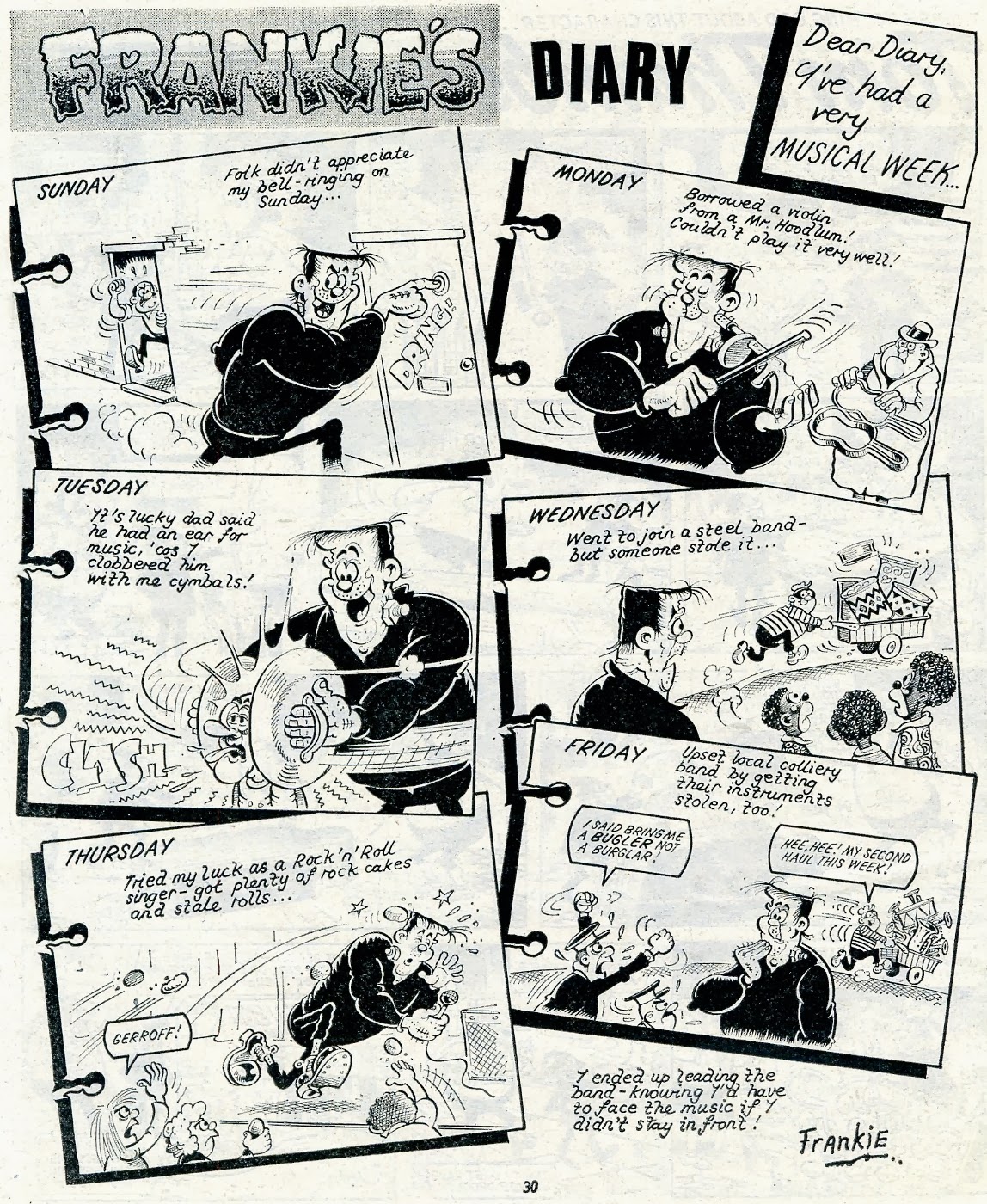 The title of the strip tells it all, really – it was a diary written by the friendly monster himself, telling readers about his misdaventures during the week. It was different from Frankie’s antics in WHOOPEE! because in MFC there was less of Prof. Cube so he didn’t have to suffer as much as he did in the other comic. In Frankie’s Diary most of the humour was at Frankie’s own expense. 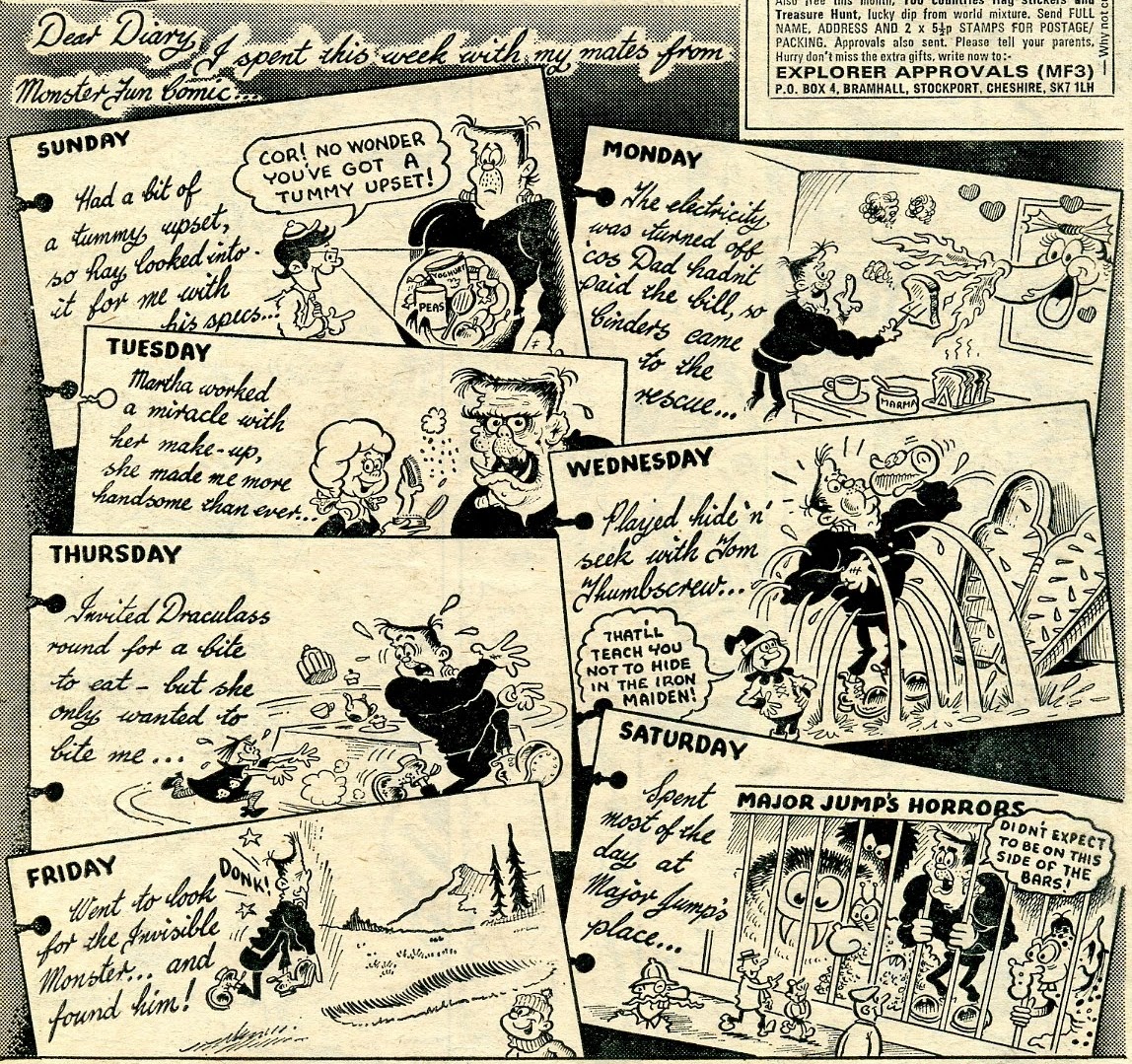 … but normally he wrote his diary five days a week: 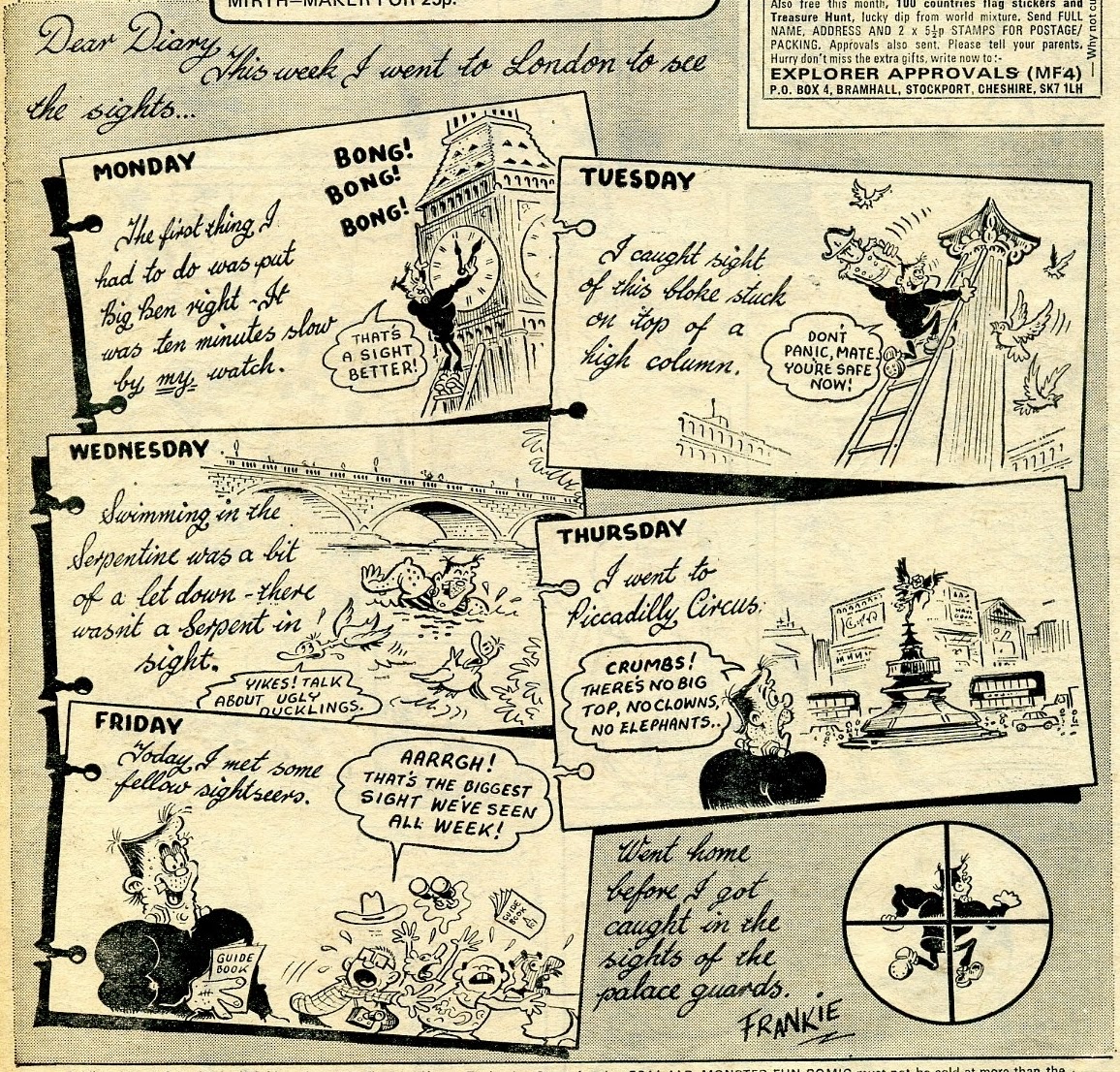 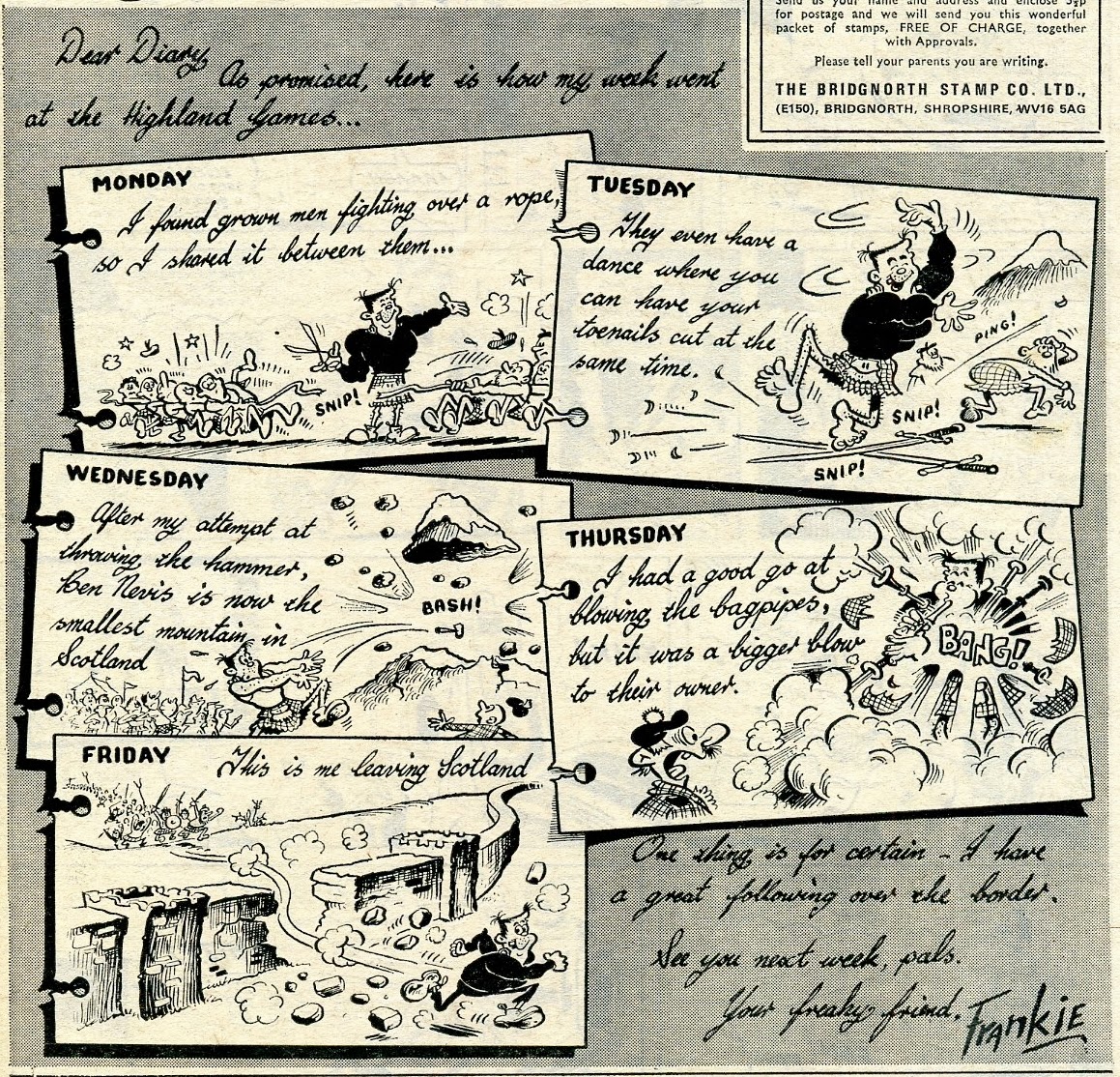 …unless special circumstances dictated that it had to be cut to four or three days only: 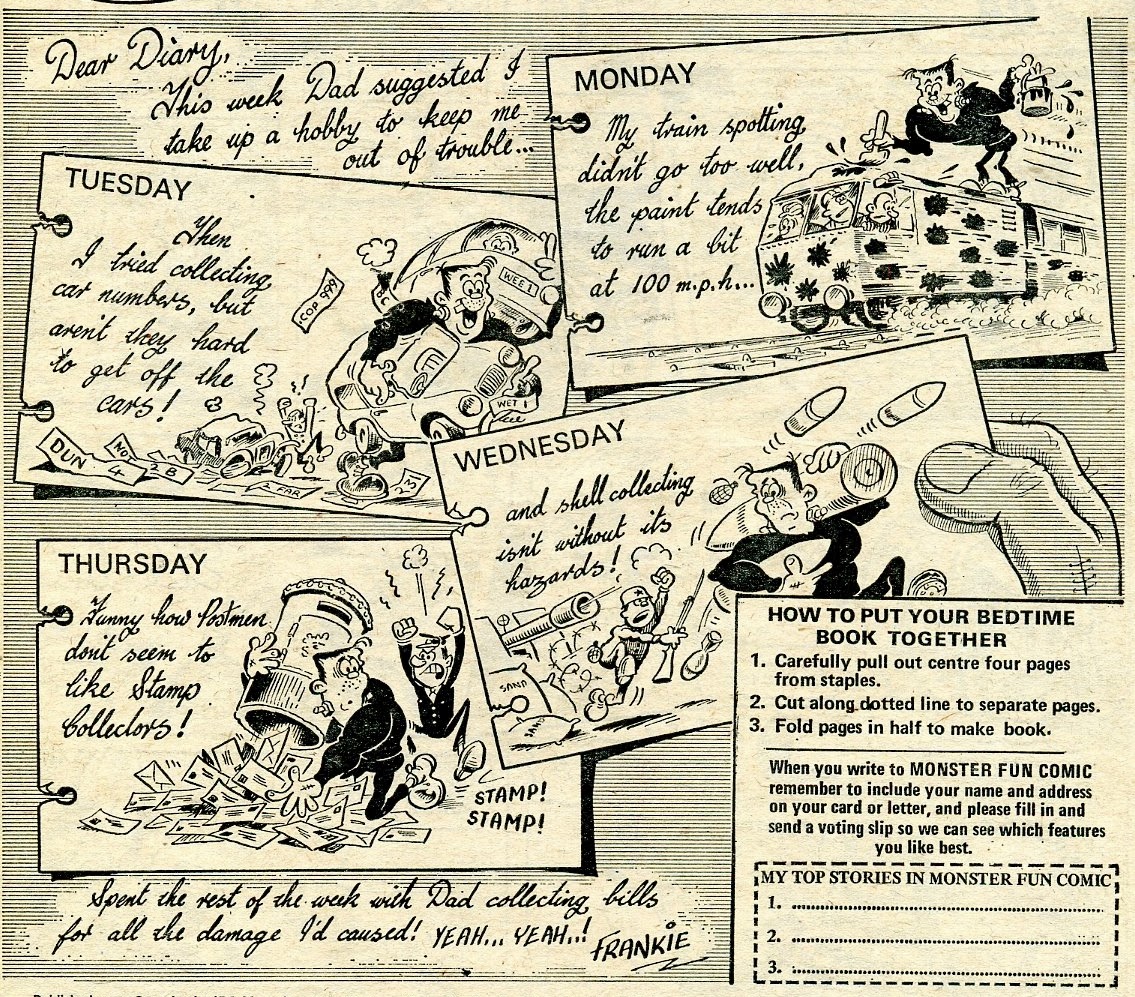 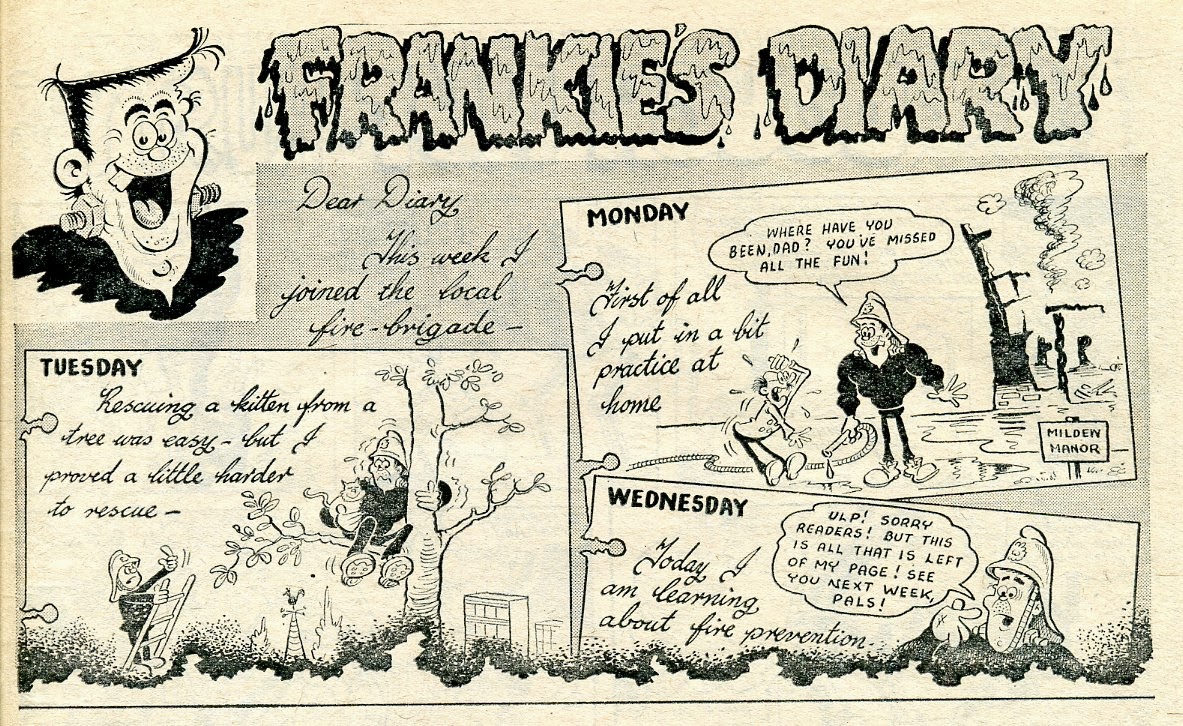 Later on, six days became standard. No explanation for the exclusion of Sunday was offered, perhaps it was Frankie’s day off… Most likely though it was because pages looked less cluttered with only six entries of the diary: 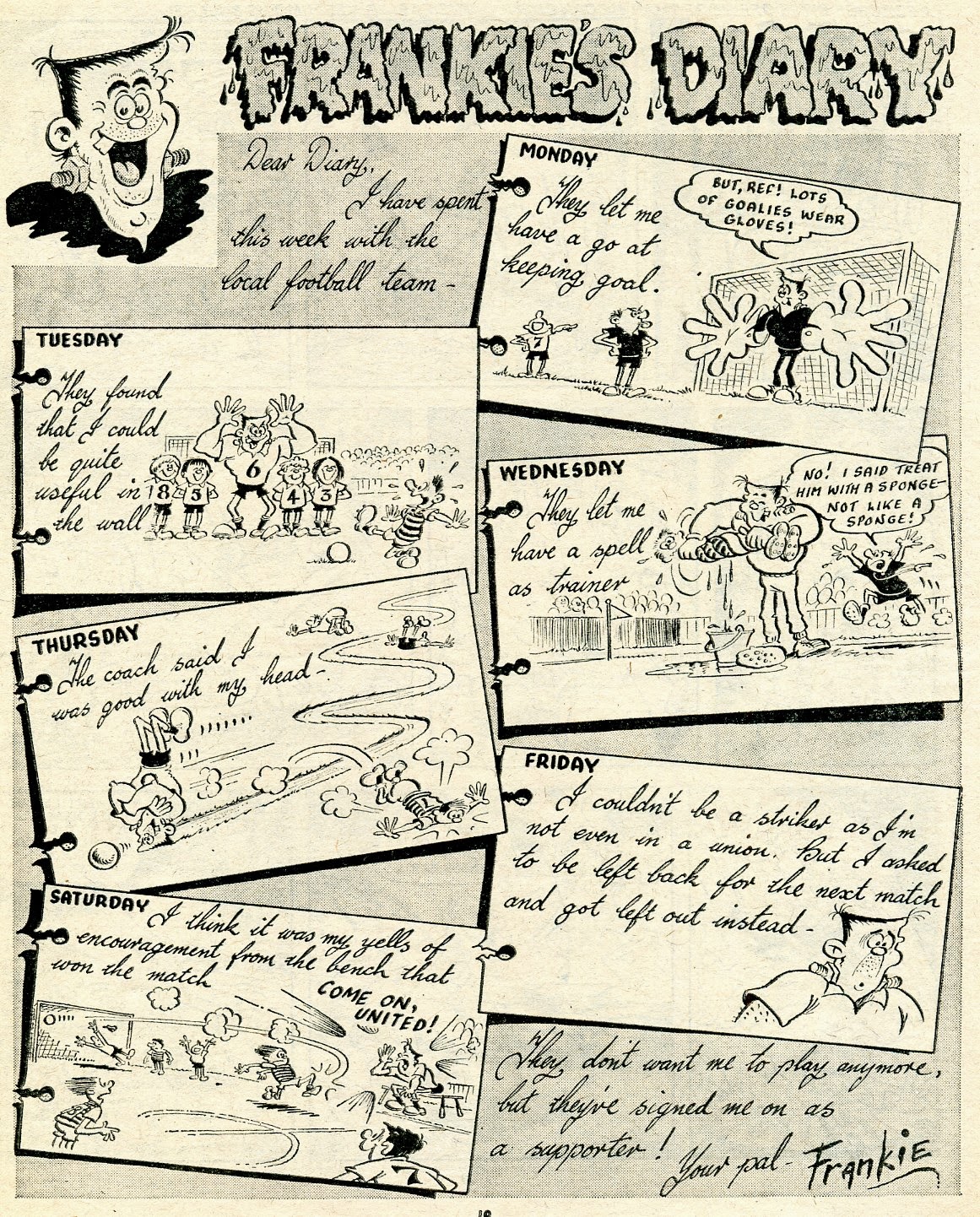 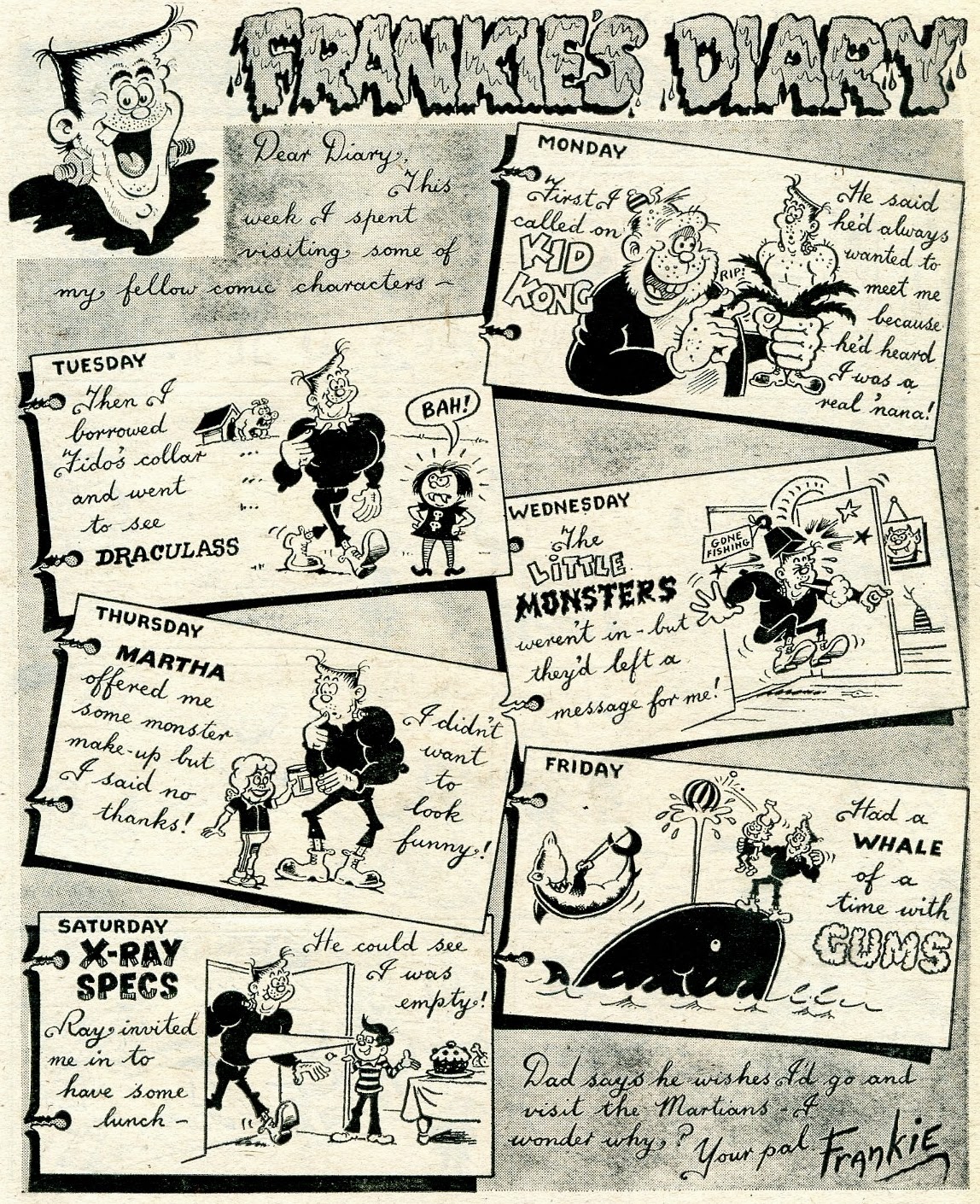 There were two participation features involving the Honorary Editor. Letters of Frankie was a regular feature throughout the run of the paper. I won’t go into details because the letters column has already been covered in the yearly overviews HERE and HERE.

The other one went by the headline Ticklish Allsorts and had little to do with Frankie Stein, except that he was the presenter and the feature always carried his portrait in the corner (in fact, the portrait was a cropped version of the same old drawing by Rob Nixon first used in Frankie’s editorial in MFC No. 1). Readers were invited to contribute “something amusing” and collect the award of a pound for every entry printed. Each week editorial staff would deliver an assortment of those amusing reader contributions to Les Barton who’d produce detailed sets that IMHO are a treat to the eye. They were usually half-a-page long but sometimes Les Barton did a full page. Here are some examples. Aren’t they brilliant! 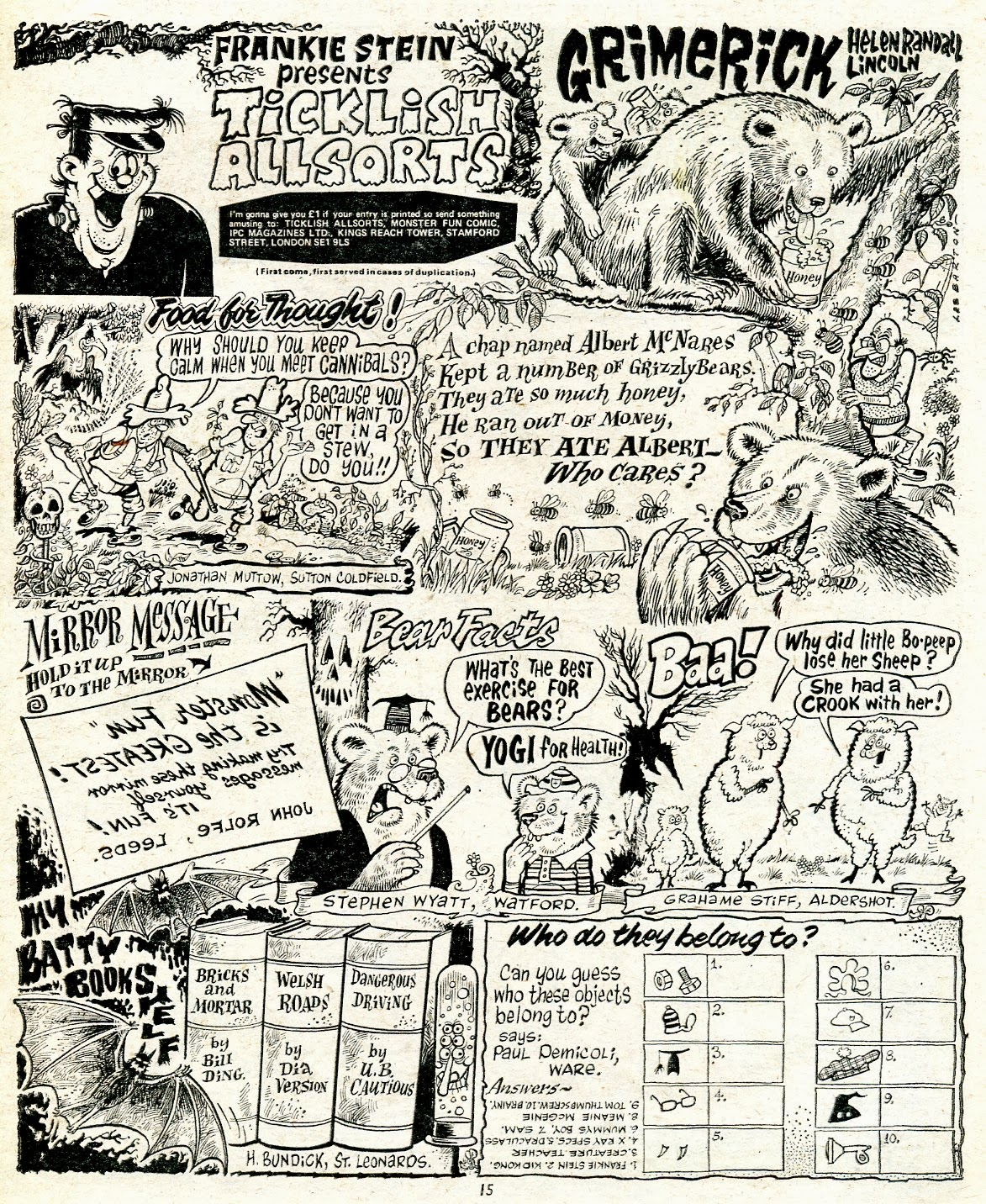 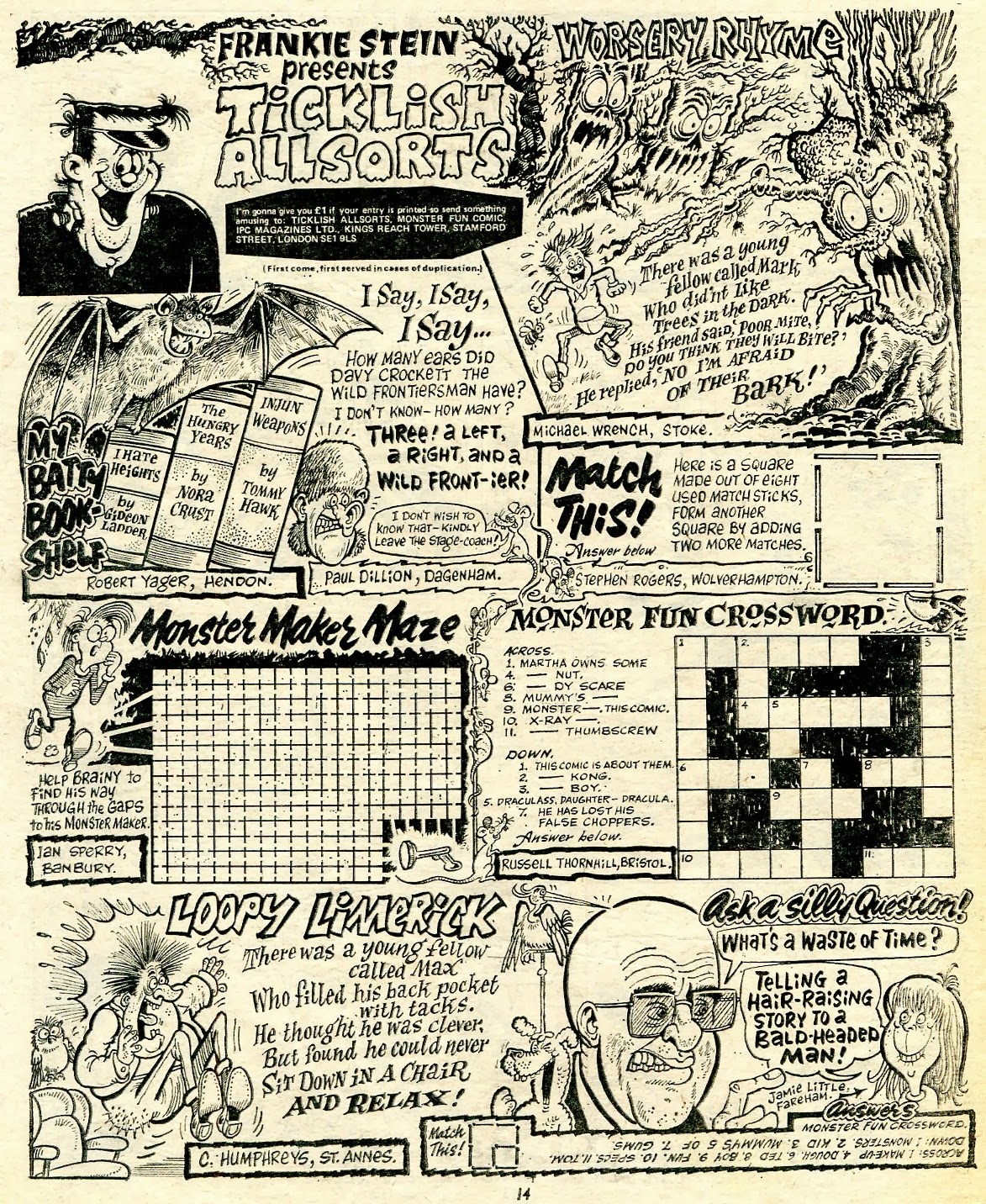 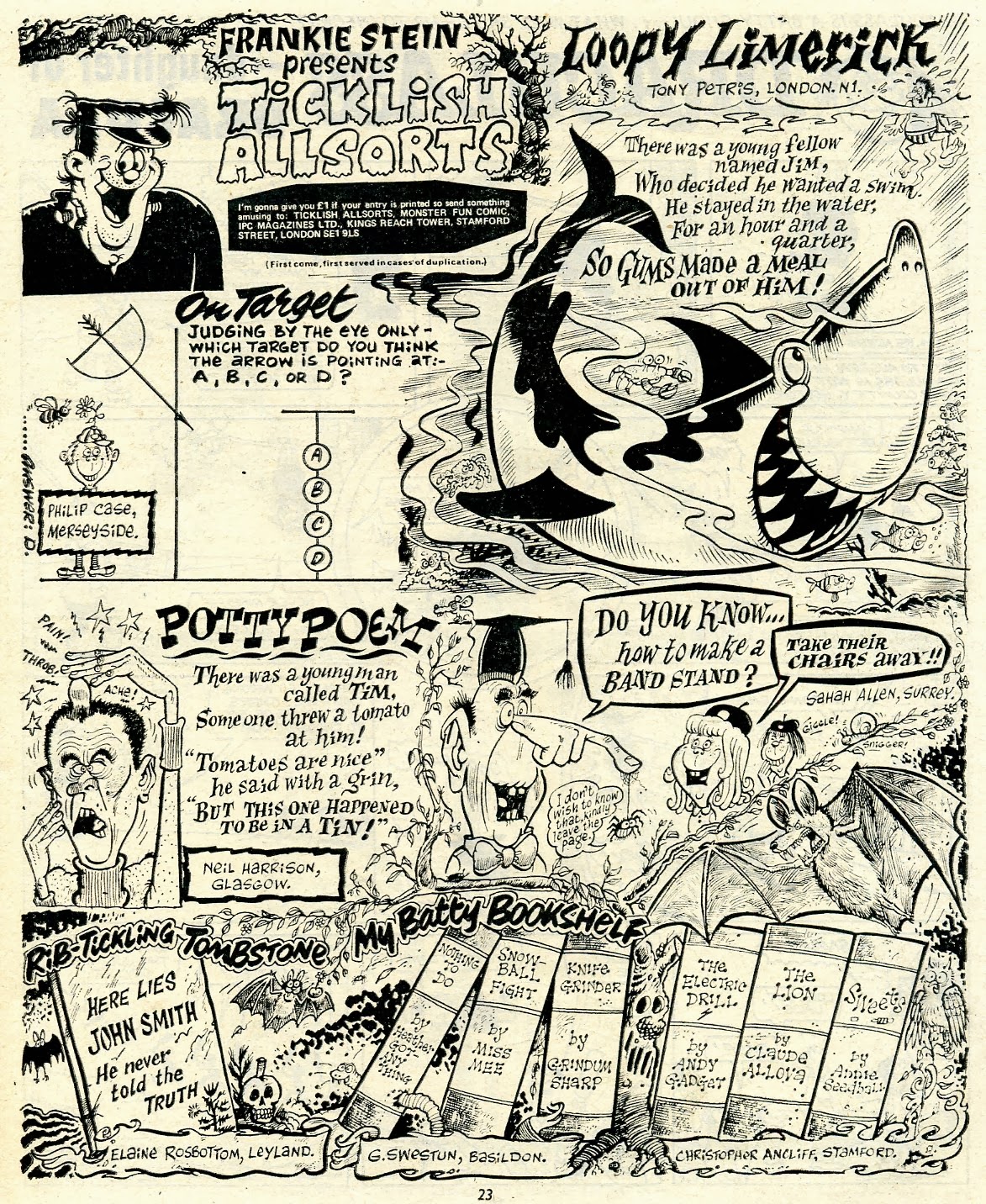 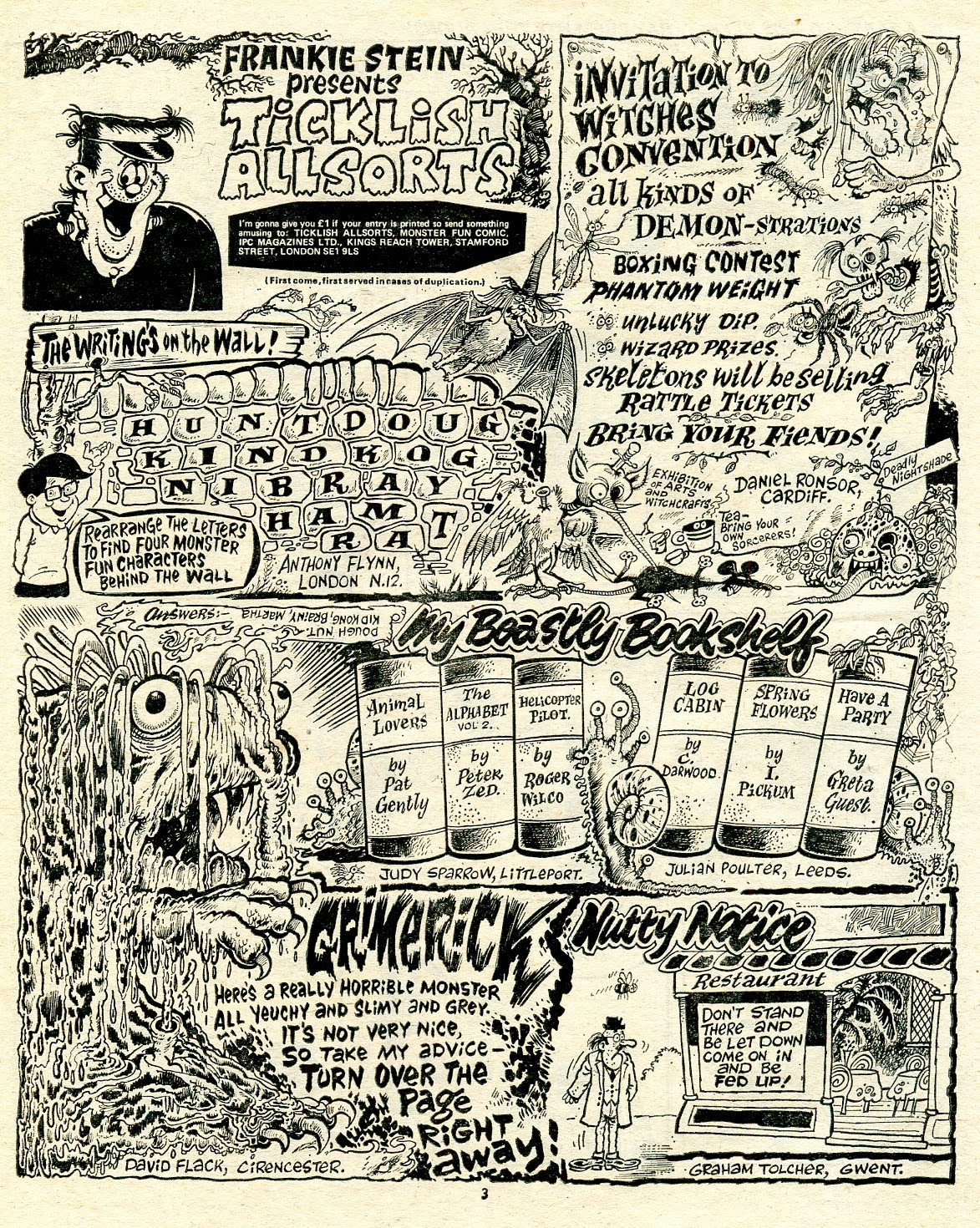 In order for this account of Frankie Stein’s appearances in MFC weeklies to be complete, I will also mention Frankie’s Fun Feature – a spot-the-difference kind of puzzle in issue 9; another one like this can be found in issue 19. 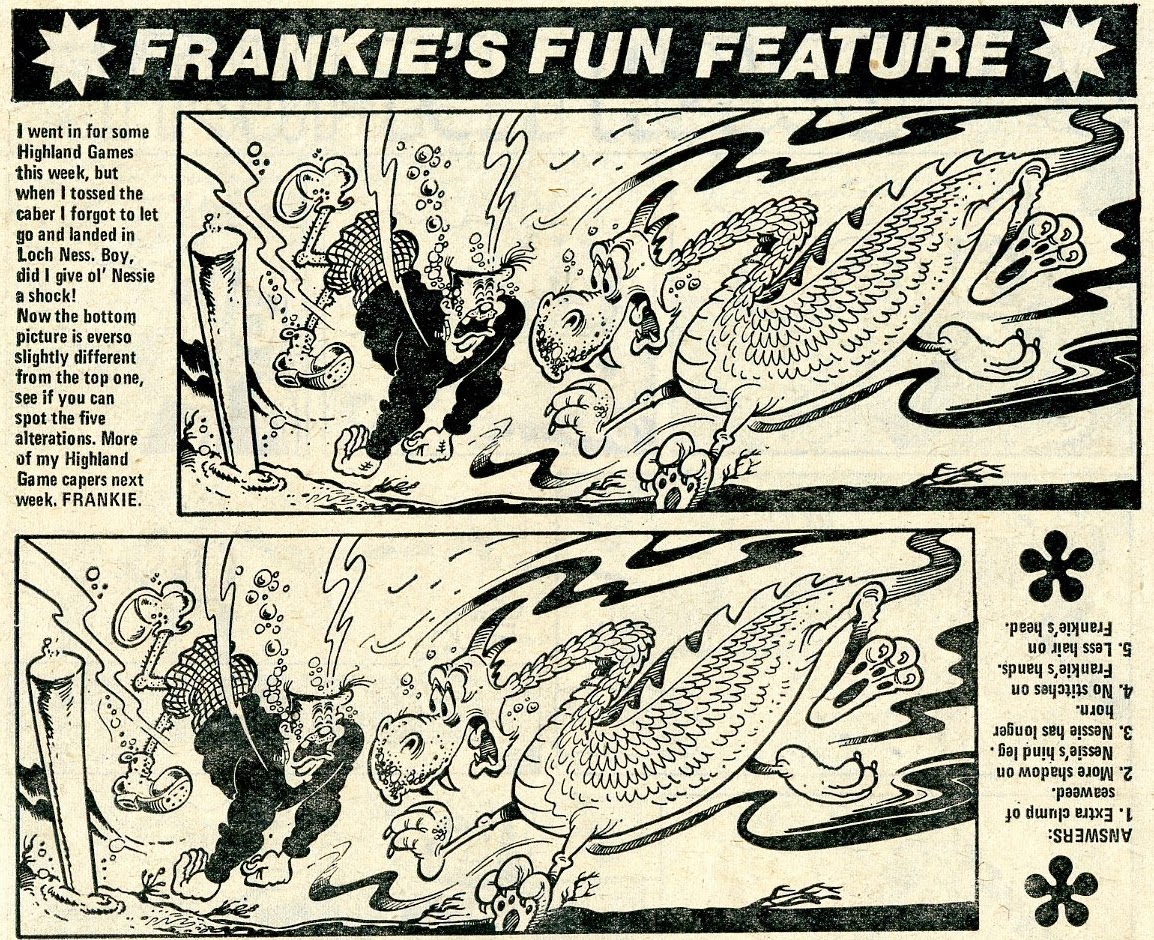 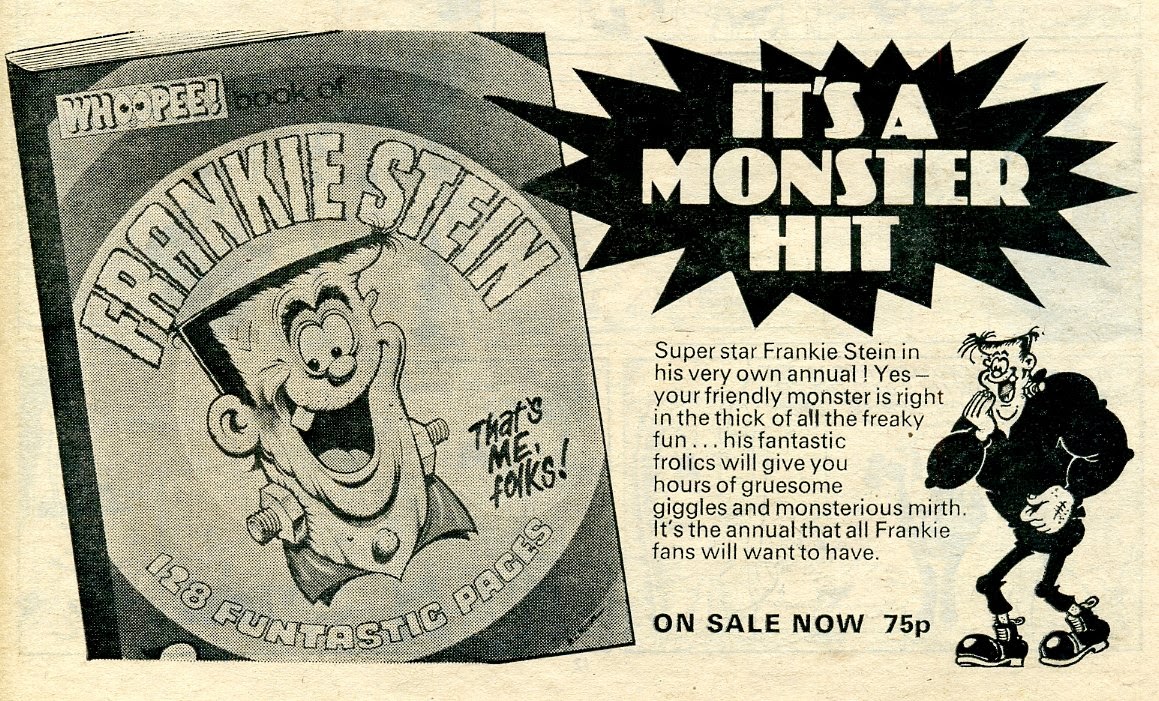 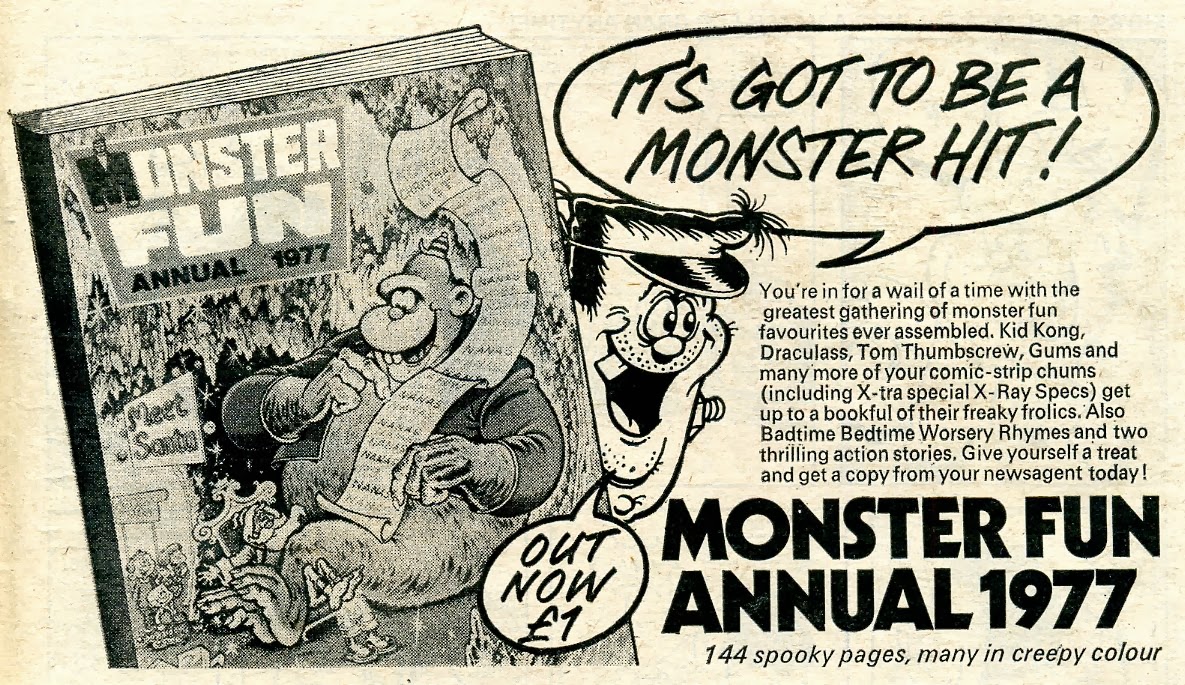 It remains to be checked, but I have a feeling that the Honorary Editor sometimes made the odd guest appearance in other strips of the paper, such as in Draculass in No. 51: 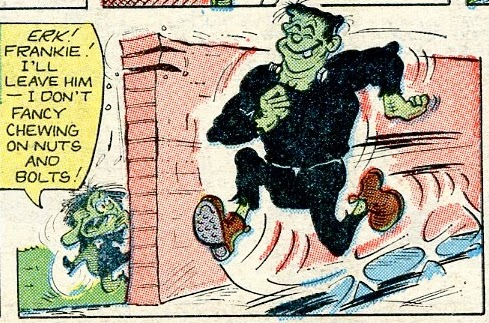 And now, on with reviews of individual strips and Kid Kong is first in line!
Posted by Irmantas at 7:07 AM