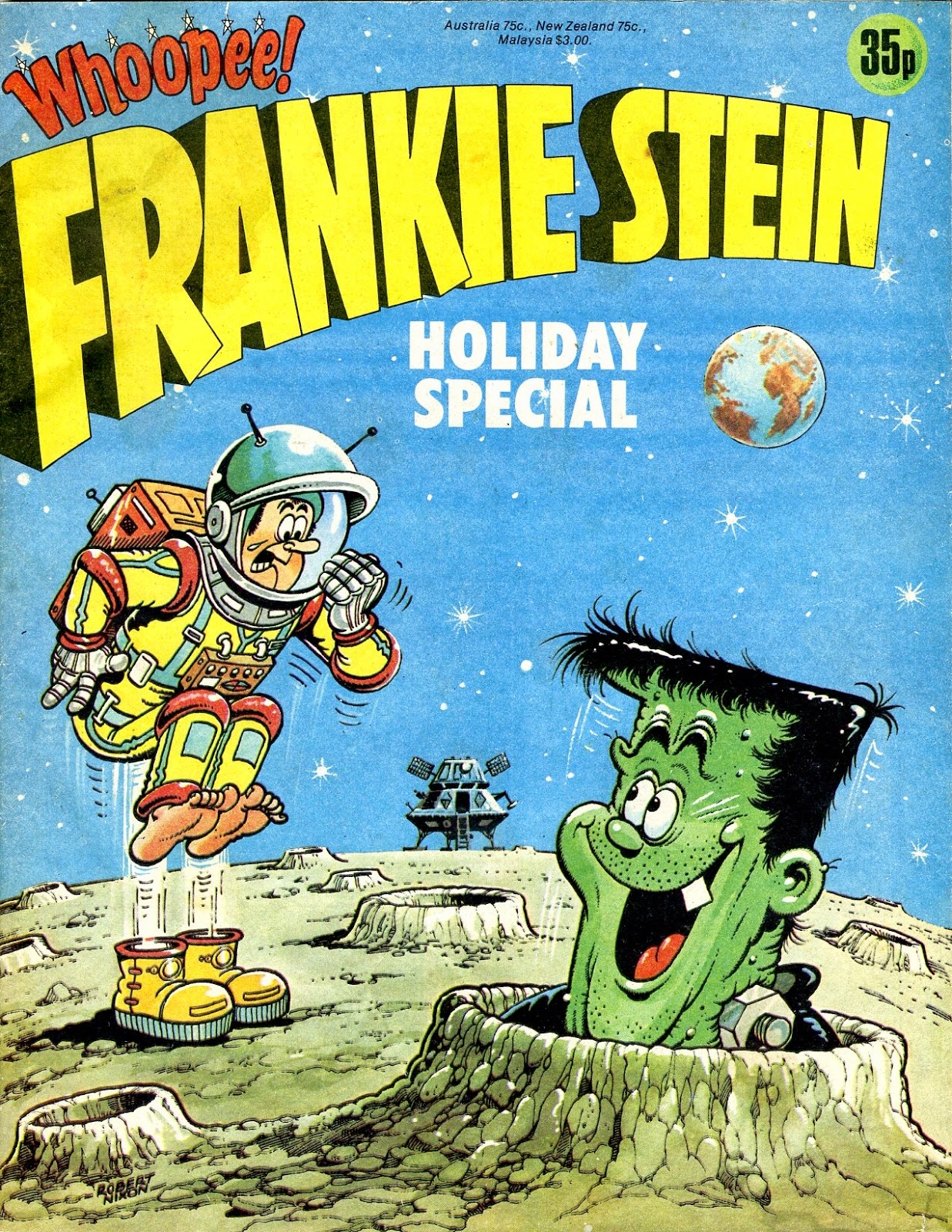 If I were a kid who bought it in the summer of 1978 I would have probably been disappointed with the low amount of Frankie Stein content – only 27 pages featured the friendly monster. This includes the front cover, the pull-out poster of Frankie Stein in a space suit drawn by Robert Nixon – not a reprint this time, 4 pages of Freaky Frankie Puzzles by Artie Jackson, Ghoulish Picture Crossword by Cliff Brown and 19 pages of Frankie Stein antics serialised in three interconnected stories: Adventure in Space (8 pages), African Safari (6 pages) and Holiday Cruise (5 pages).

Watching 'Warstars' and seeing Frankie enjoying it very much gives Dad an idea to send him on a trip into space. As Prof. Cube’s luck goes, he accidentally finds himself on board the spacecraft together with Frankie. 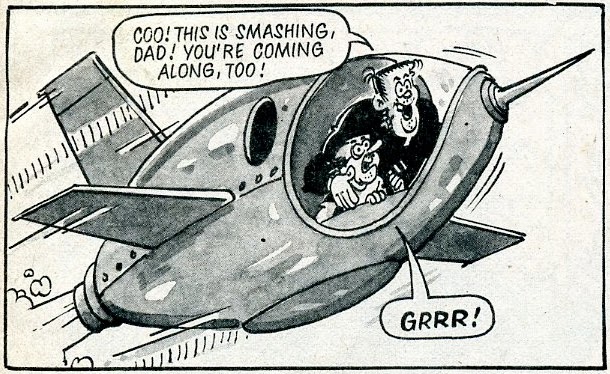 They run into some space creatures and Dad gives them Frankie as a gift, telling them he is a slave robot. Frankie proves to be completely useless as a servant and the aliens kick him out. 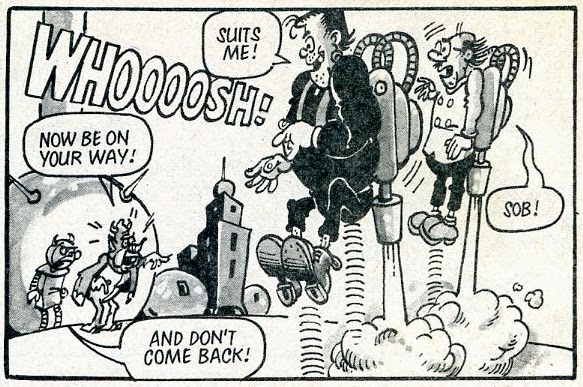 Frankie and Dad’s space journey continues and they find themselves in the middle of an inter-stellar war.

Frankie helps the clashing space tribes make peace and is rewarded with a spaceship to transport him home. Dad makes his last attempt to get rid of the ‘big lunk’ by programming the spacecraft to take him to the Sun but a massive explosion on the surface of the Sun destroys the craft and the pair land on planet Earth in the middle of Africa. This is where the space adventure ends and the African safari begins. Dad’s ploys during the safari include dropping lion skin on Frankie in hope that hunters will shoot him down, encouraging Frankie to take a boat to see some nasty waterfalls up close and finally losing him in the desert. 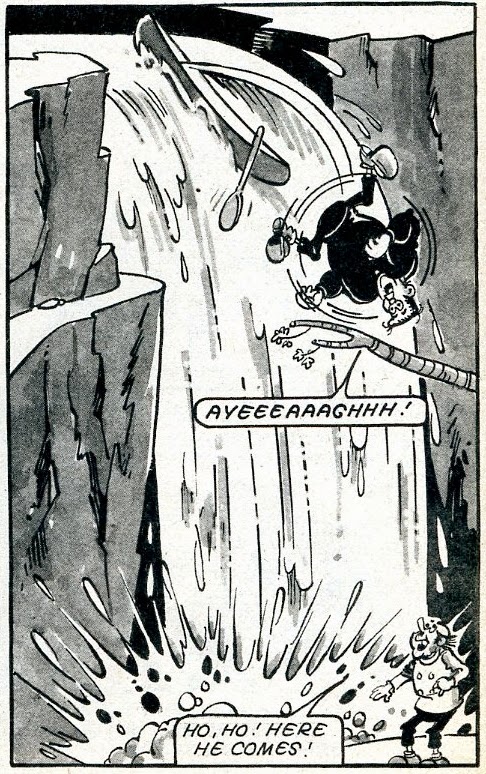 Digging for water in desert sands, Frankie strikes oil, sells the well, catches up with Dad and suggests that they go home on a luxury liner. 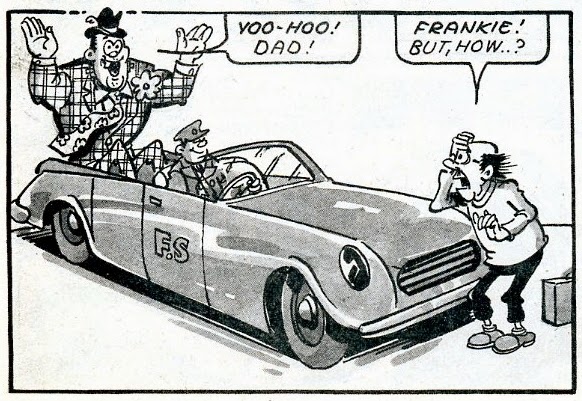 While on the holiday cruise, Dad throws Frankie into the ocean to play with the sharks, then attempts to poison him by putting ‘stuff’ in his salt and finally leaves him stranded on a desert island inhabited by cannibals. 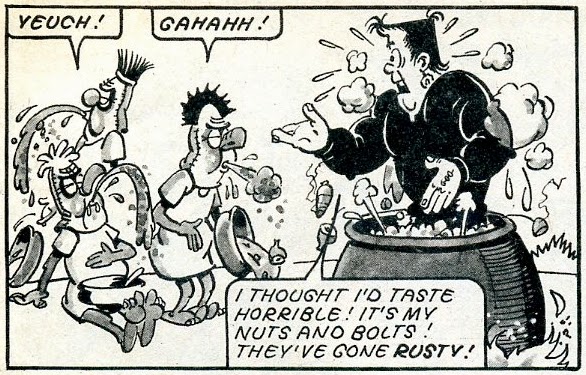 Frankie leaves the island on the back of a whale but soon finds himself stranded on a coral reef. I like the ending: 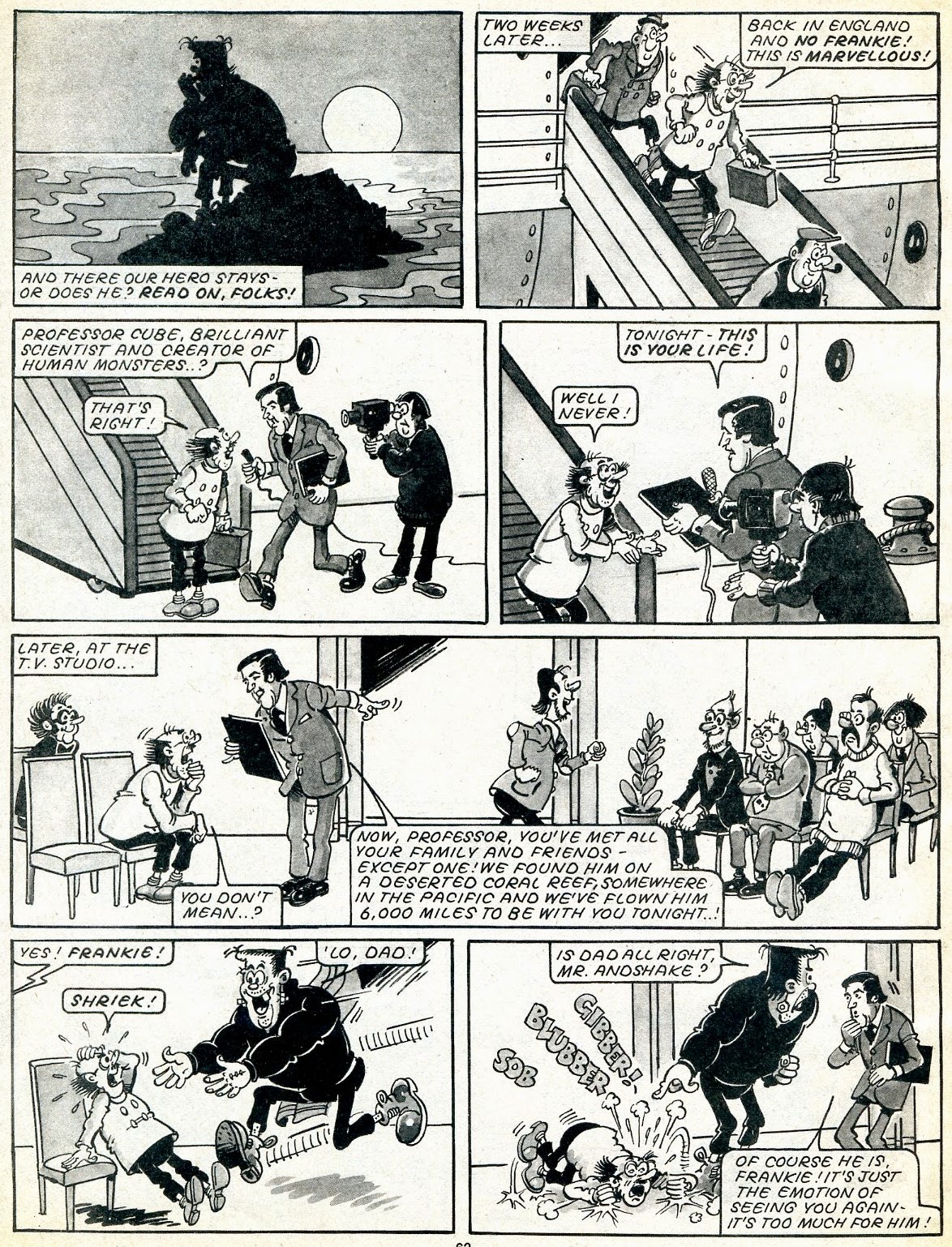 I may be mistaken but it looks like the illustrator was the same Doug Baker who signed two Frankie Stein gags in the previous Holiday Special and drew a number of FS tales in other Frankie Stein publications earlier on. If it was indeed him, his style had improved somewhat since the second Frankie Stein annual (Robinson Frankie and Frankie Stein Super-Freak stories) and grey wash also made the drawings look better. 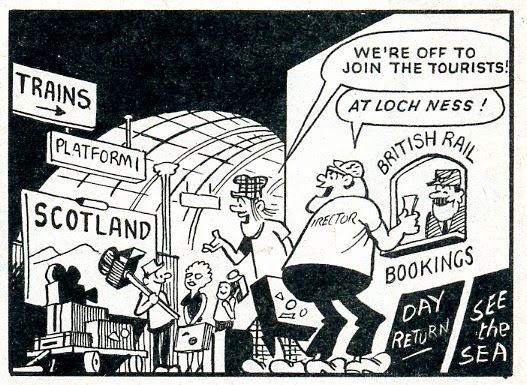 Let’s look other new stories. In Monster Movie Makers Carlo Monte and his crew are shooting their latest epic – ‘The Loch Ness Monster’. The budget prevents them from hiring extras for the crowd scenes so they take their cameras to the actual loch, hoping to scare the holidaymakers with a dummy monster and film their reaction. Things don’t go as planned but turn out well for the daft movie makers in the end. The artist was Mr. Hill who also drew Monster Movie Makers for the previous FS Holiday Special (as well as the subsequent ones).

Computer Cop was a new strip drawn by Alan Rogers. It was about a super robo-cop. Here is the last page of this 4-page episode: 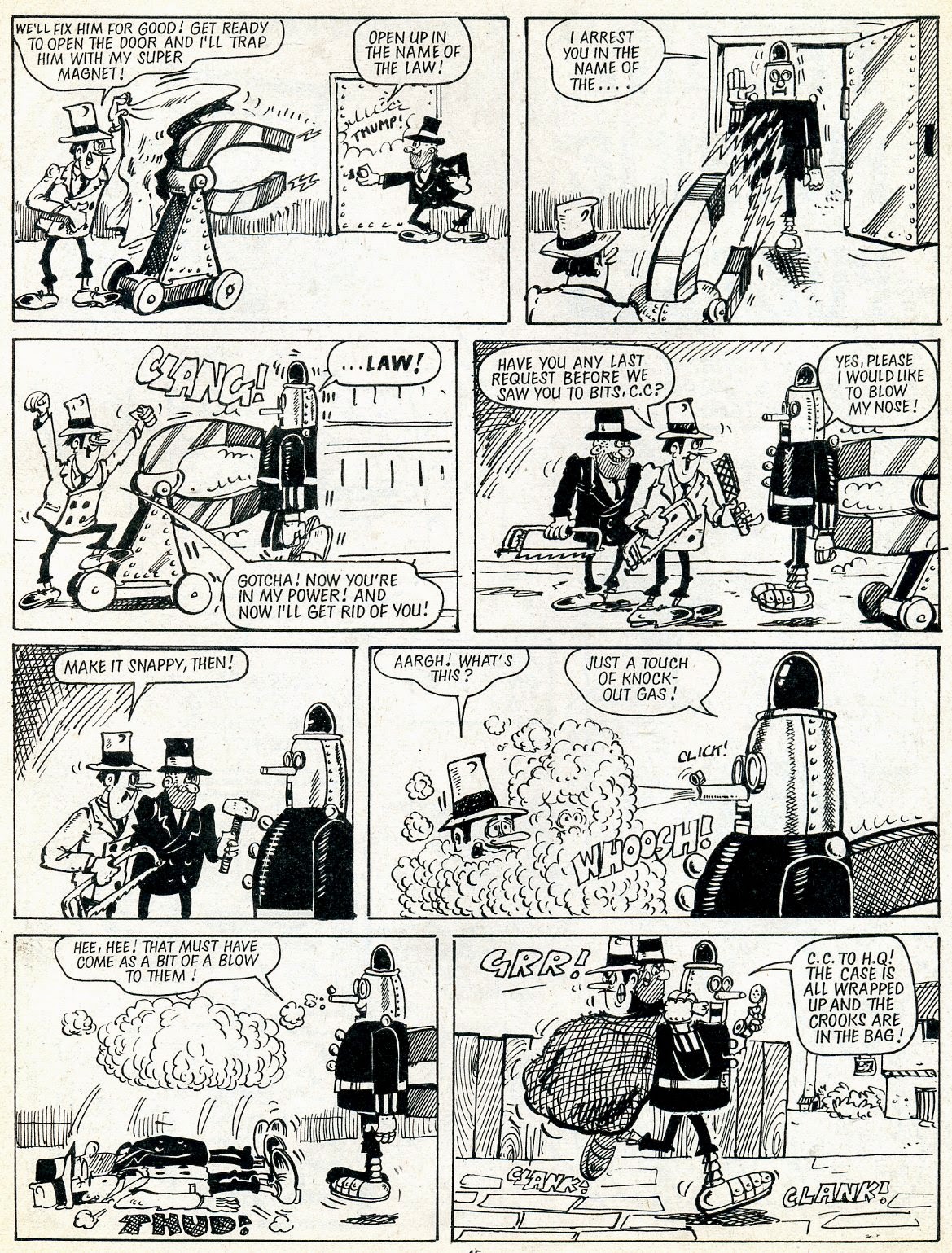 Five WHOOPEE! strips (The Hand, Fun-Fear, ‘Orrible Hole (by Les Barton), Gook-TV Spook (by Artie Jackson who is also responsible for five pages of puzzles and gags in this magazine) and Webster (by Terry Bave)) look like new material drawn especially for this Holiday Special. Here are both pages of Fun-Fear. I wonder who drew them? Looks like Mr. Hill to me: 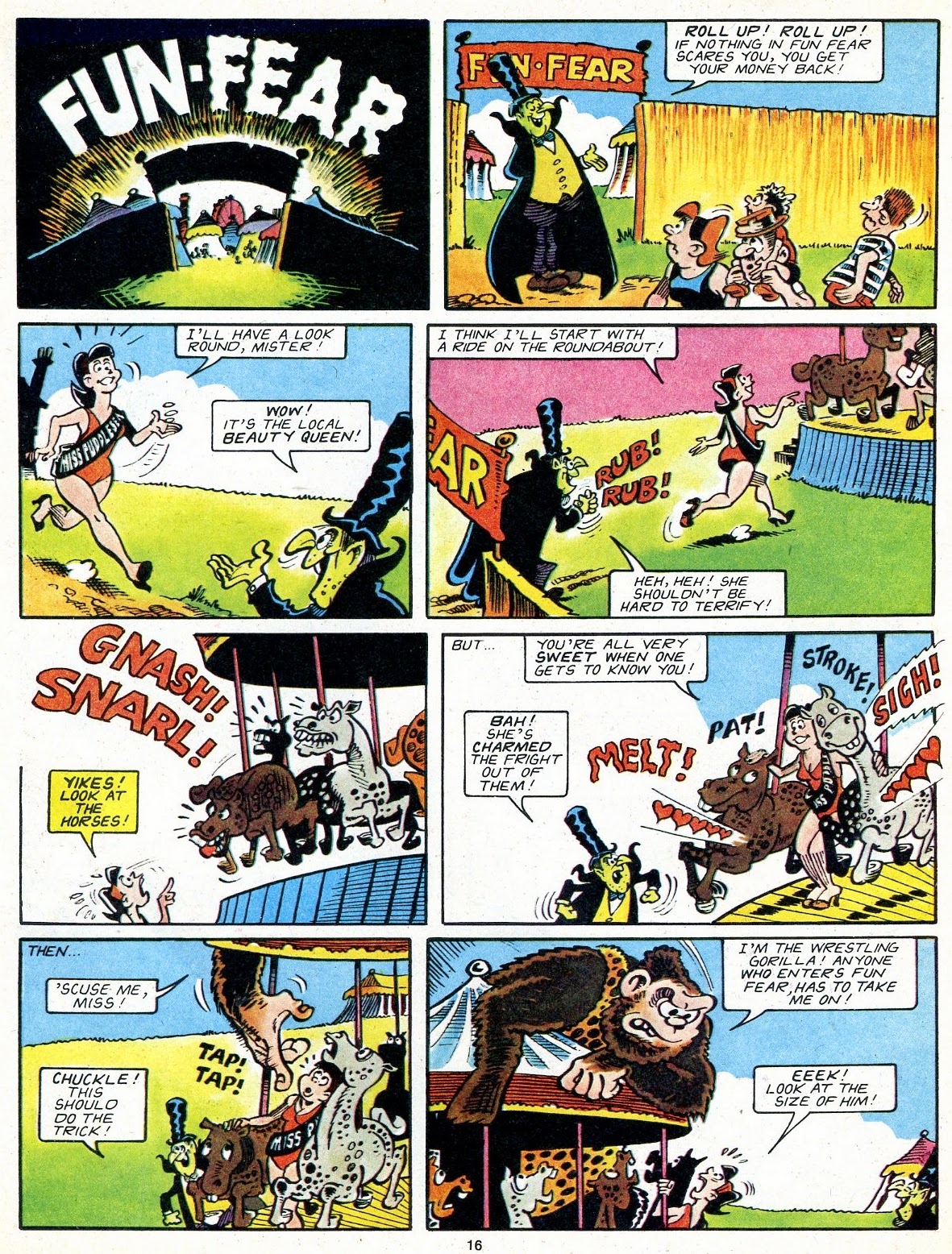 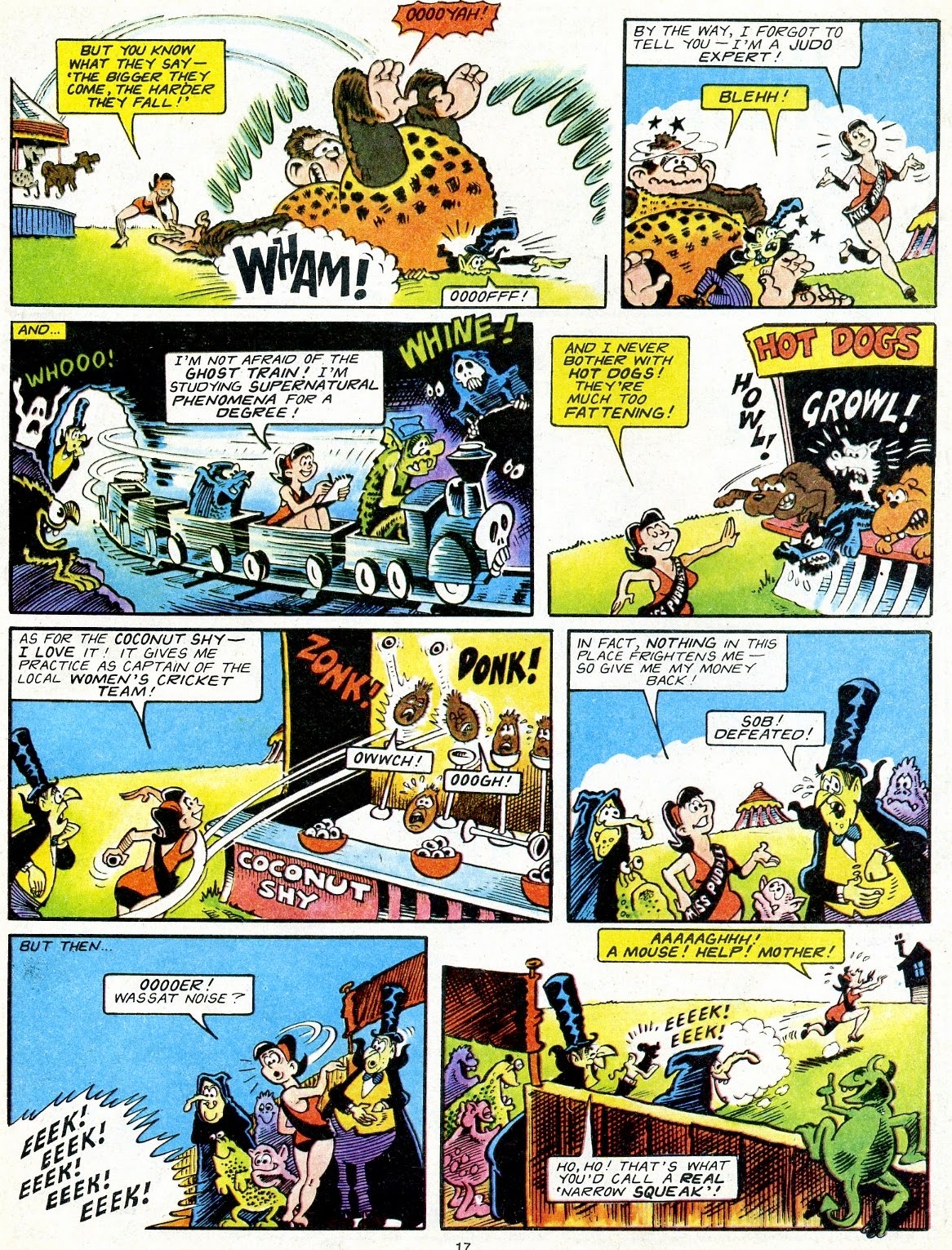 They stopped reprinting The Haunts of Headless Harry and Ghost Ship but introduced reprints of a few strips previously unseen in FS publications: there were 2 episodes of Ghoul Guides from KNOCKOUT (IPC version), 2 episodes of Monkey Nuts by Graham Allen (I can’t remember where the reprints are from) and 5 pages of Tell Tale Tess by Joe McCaffrey from COR!!

For the second time after the previous FS Holiday Special, this edition also has 2 episodes of Barney’s Brain Box, reprinted from COR!!

I will round up this post by showing a page of gags by Artie Jackson: 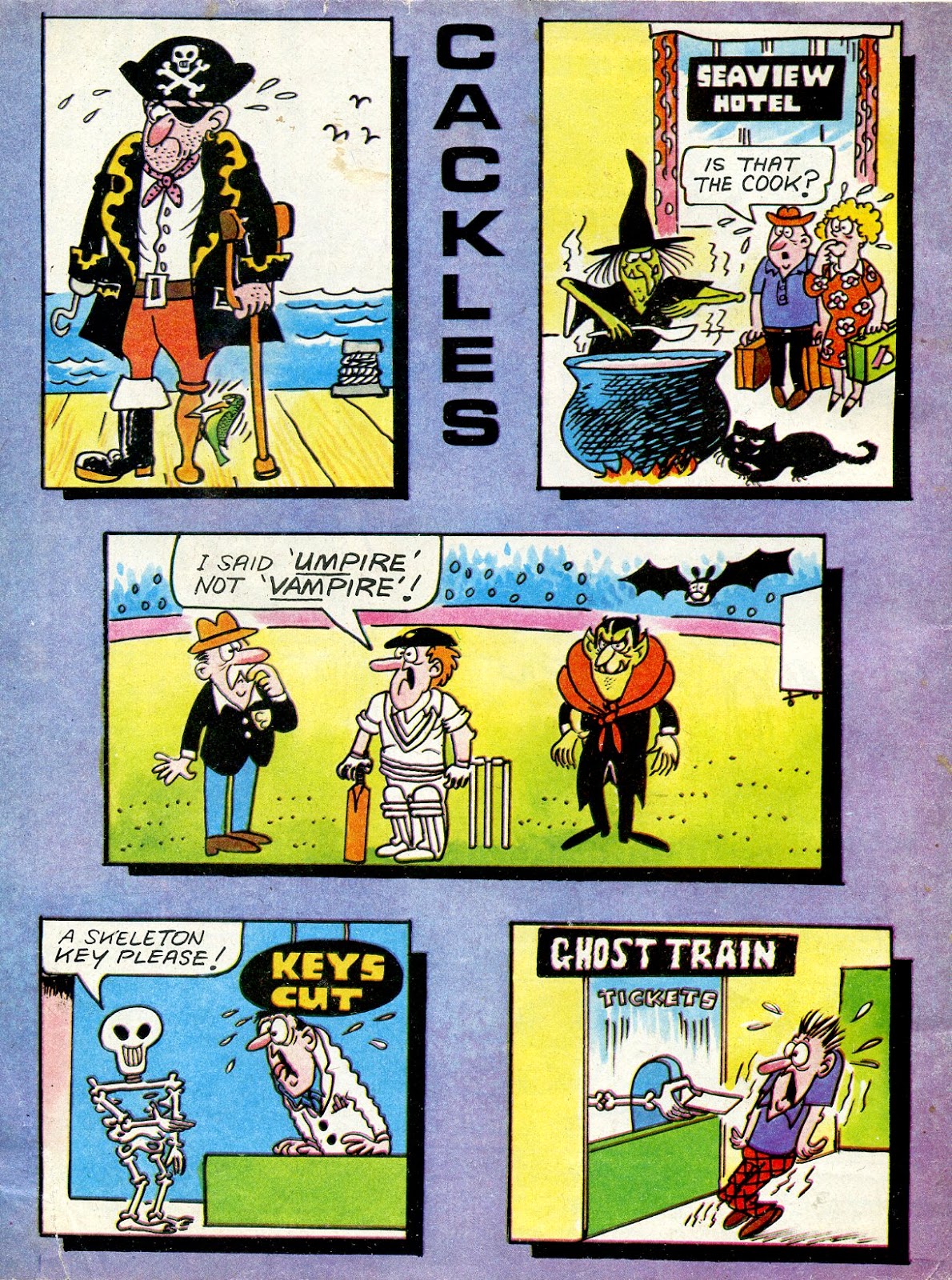 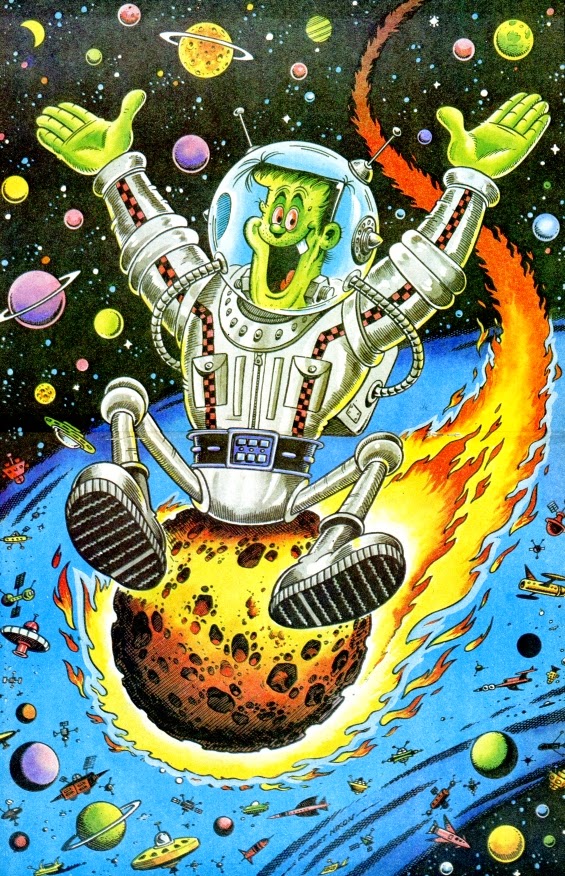 Images 2014 © Egmont UK Ltd.  All rights reserved. Used with permission.
Posted by Irmantas at 7:02 AM