Badtime Bedtimes Books is something what Monster Fun Comic is probably best remembered for. They were centre-page pull-outs which were meant to be removed from the comic, cut up and arranged into eight-page minibooks. Each book was a self-contained whacky story. Here is an example from MFC No. 3. Unfortunately, IPC printing presses often failed to do them justice (click on the images to enlarge): 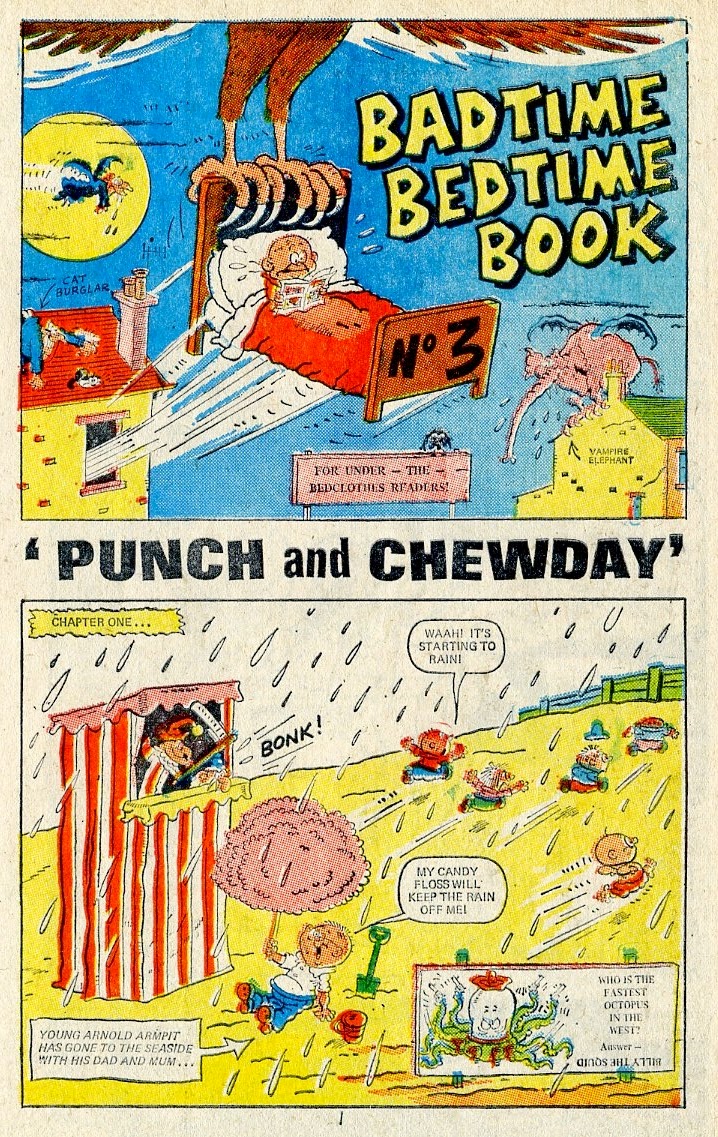 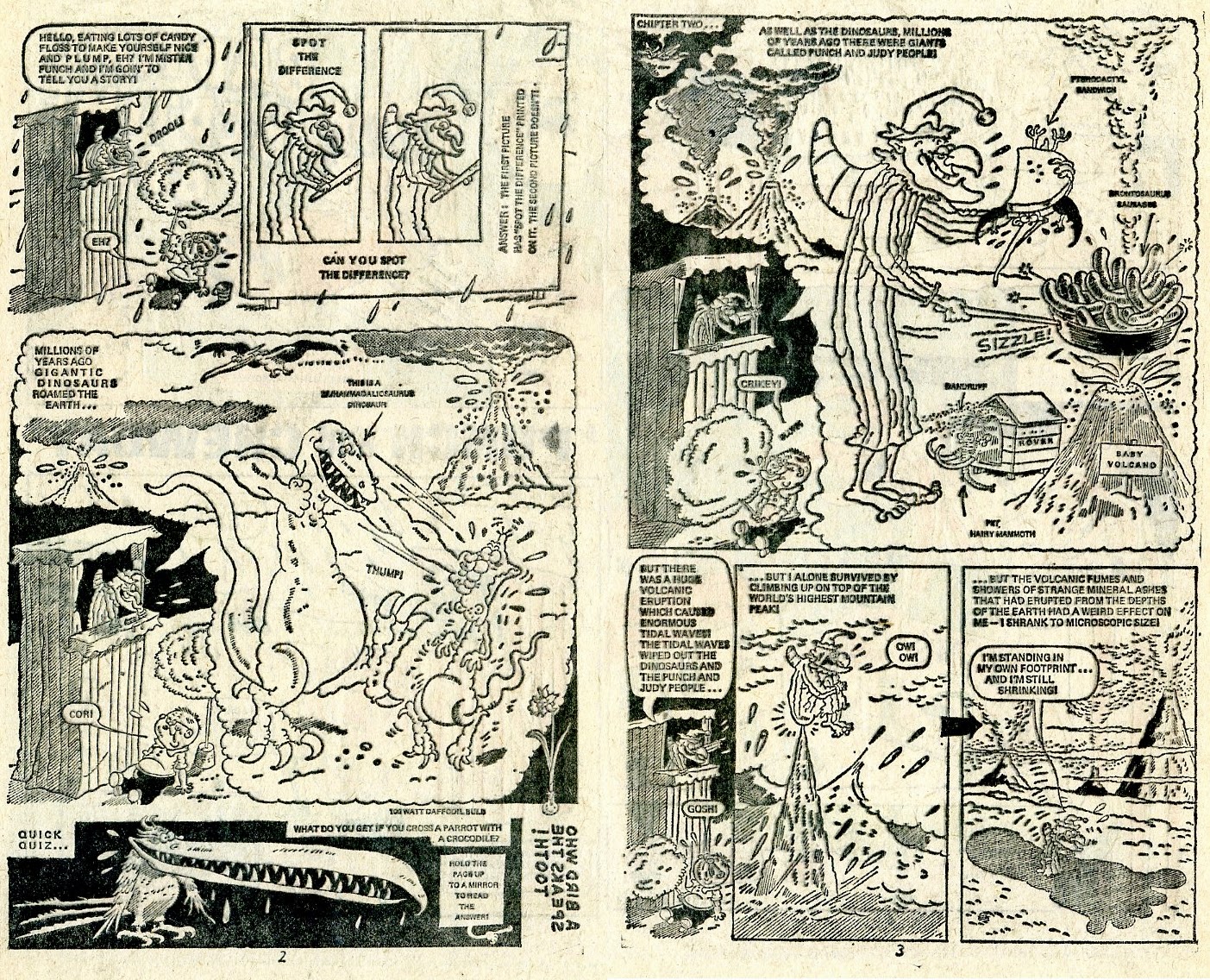 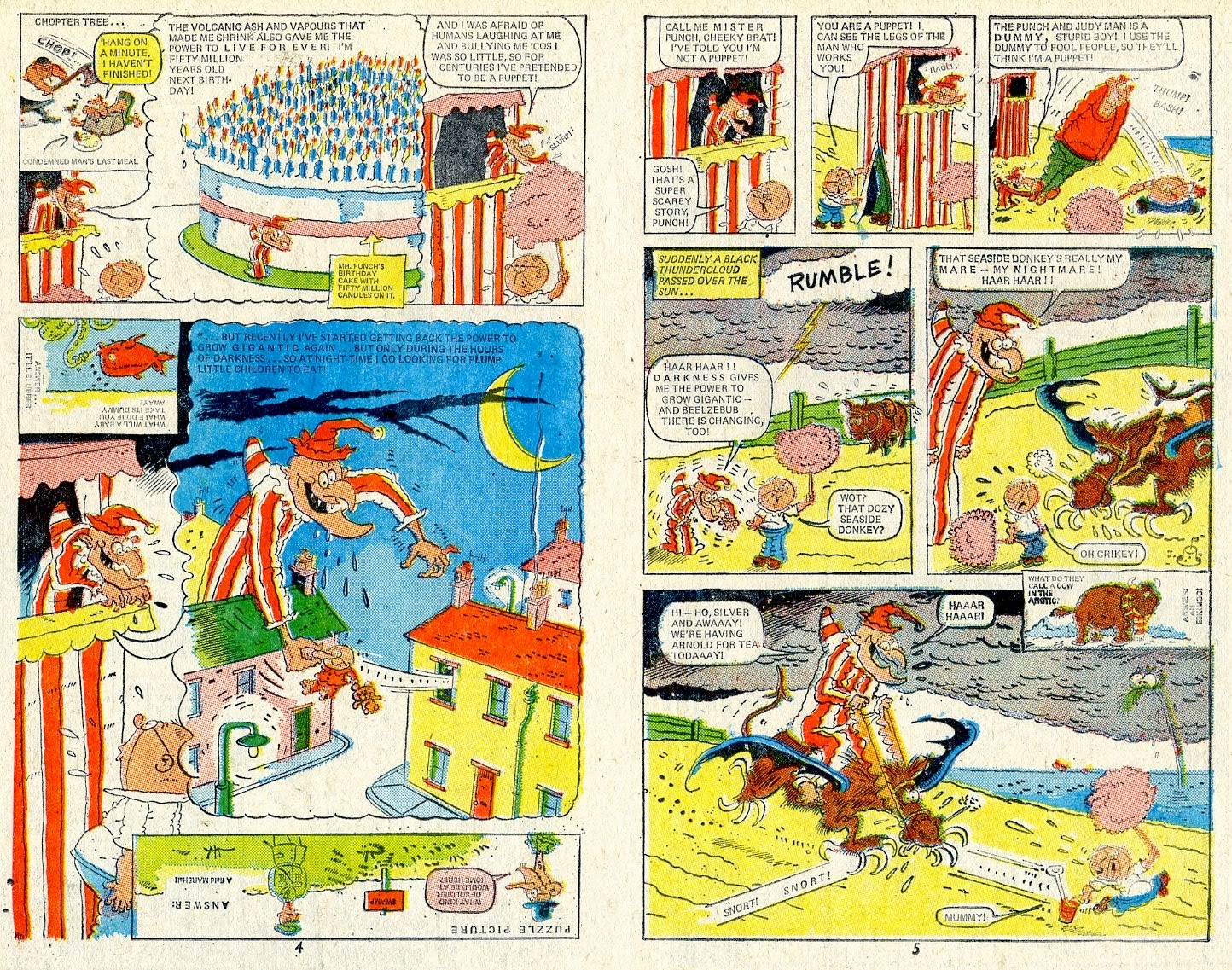 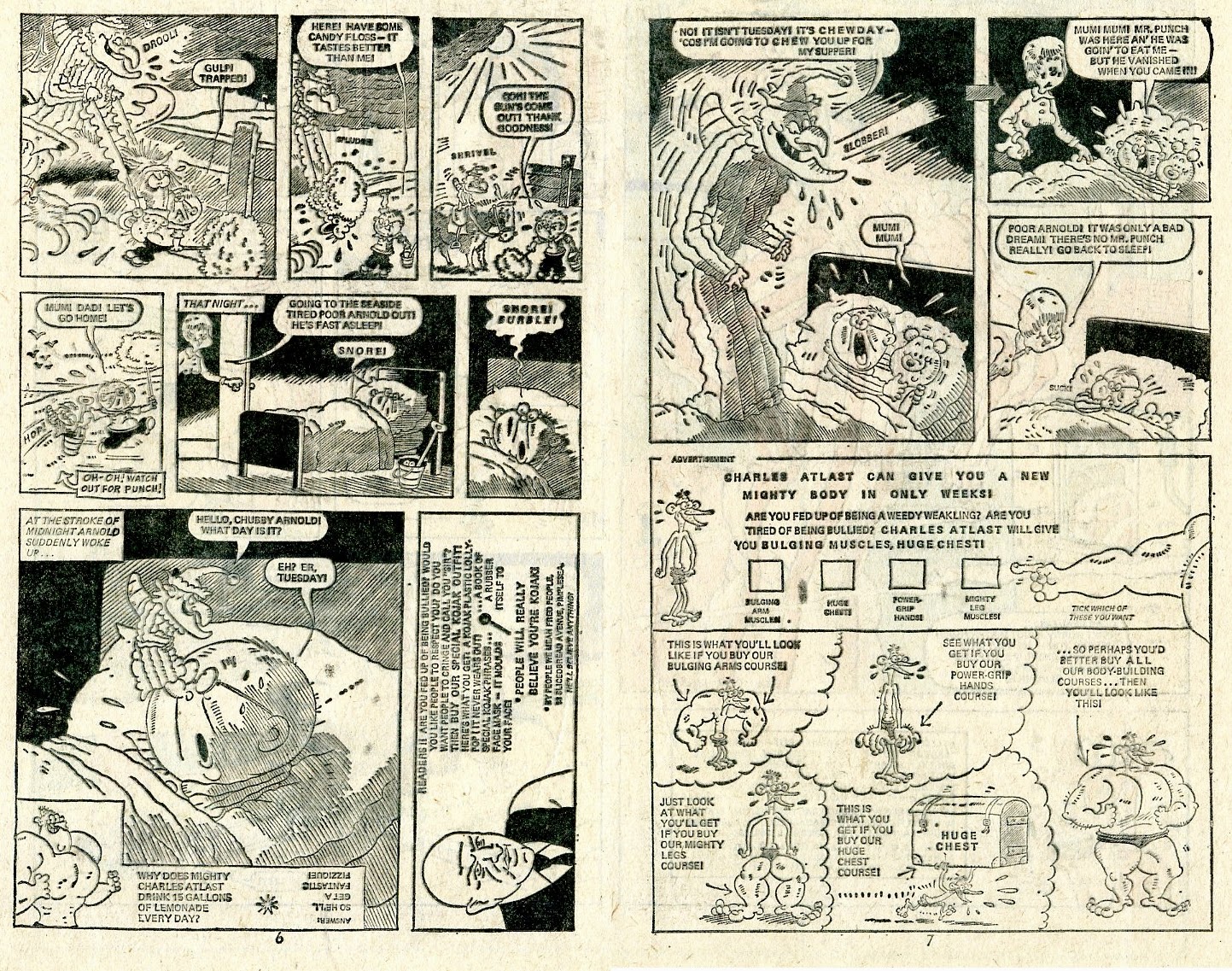 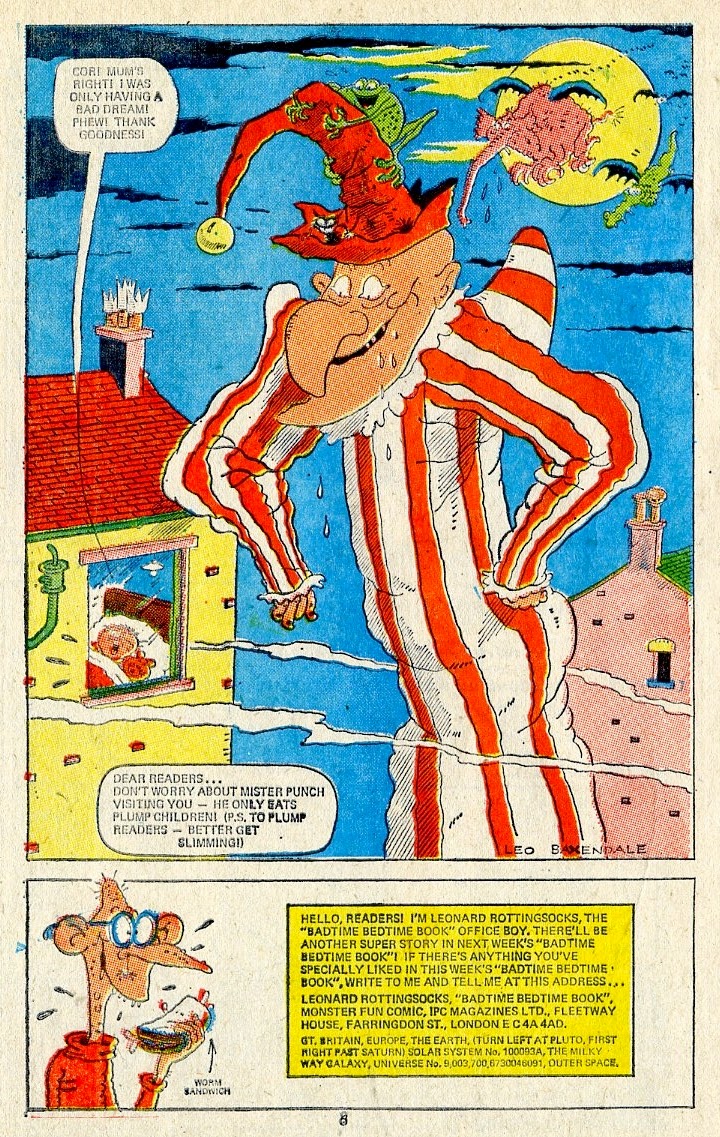 Leo Baxendale wrote about Badtime Bedtimes Books at length in his book A VERY FUNNY BUSINESS, and that’s how we know it was Bob Paynter who created the concept and gave it to Leo Baxendale to develop. Mid-70s was the time when Mr. Baxendale had grown disappointed with the comics industry and was looking for an opportunity to quit because he felt it was in for a decline. He realised that times had changed and that comics humour should follow suit. Although he was excited about Badtime Bedtime Books, he had planned from the very start to use them as a “test bed” for his new ideas and a vehicle to manoeuvre his way out of the comics industry.

The first Badtime Bedtime Books received glowing reader feedback which Leo Baxendale compared with reaction to his very early Bash Street Kids, and he immediately knew he was on the right path. 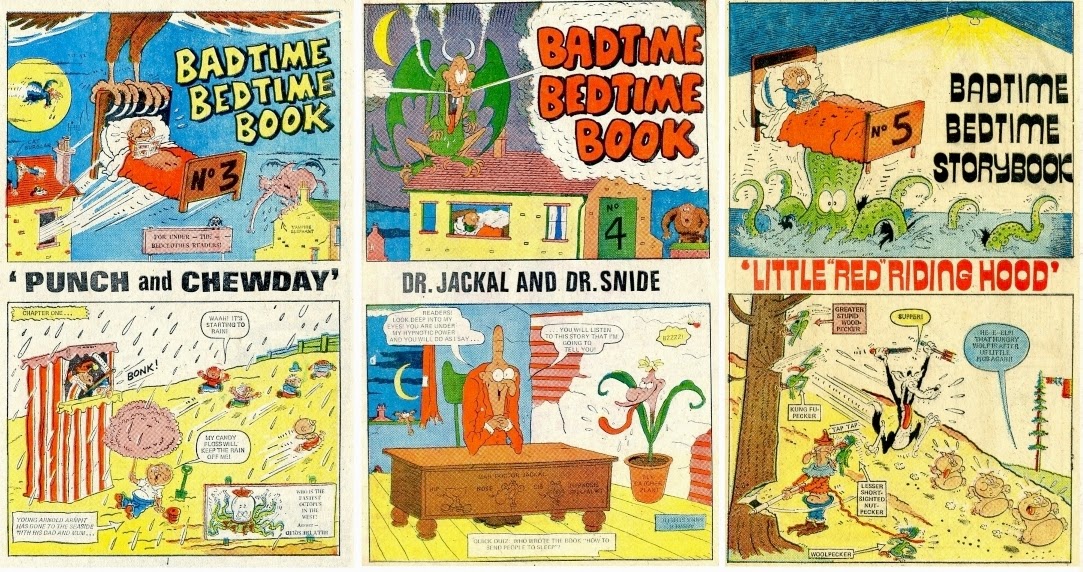 As could be expected, pressing deadlines prevented Mr. Baxendale from working at a leisurely pace and producing a quality “vintage” book every time. He gradually divested himself from other strips he had still been drawing for IPC and concentrated single-mindedly on the BBBs, but he still didn’t have enough time to do them as he thought they should be done. As a consequence, he adopted a loose sketchy style, producing a vintage set only once in a while. This was also the time when Mr. Baxendale started contemplating a series of his own Willy the Kid annuals. He no longer had the time to write the BBBs, and eventually stopped drawing them too, leaving Bob Paynter with a huge challenge of finding first the writers and later the illustrators who could match Mr. Baxendale’s talent. 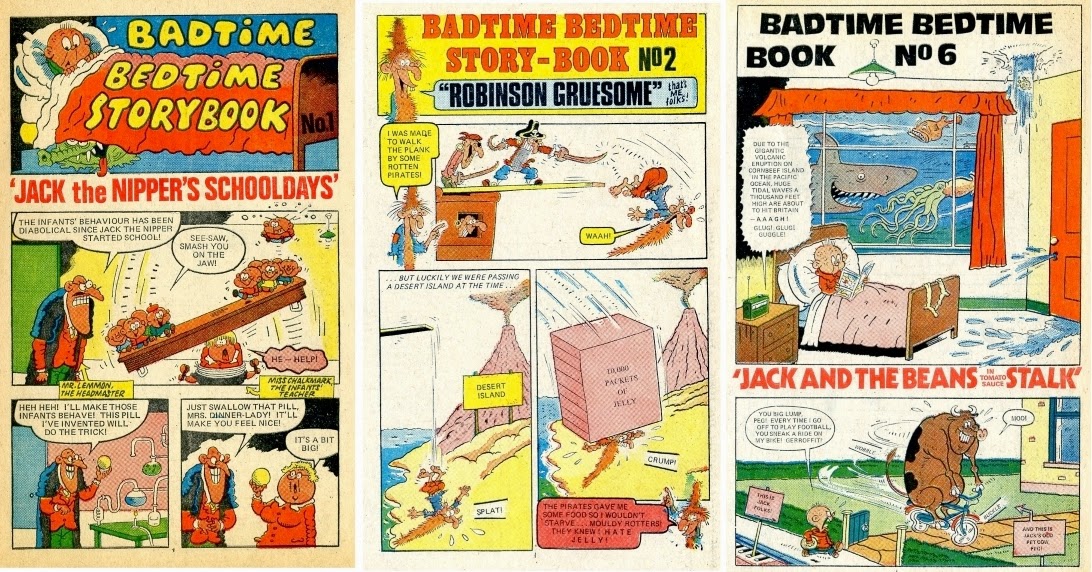 In all likelihood the original idea was to have a BBB in every issue (with the odd poster of a MFC star character squeezed in), and Mr. Baxendale was somehow able to keep the schedule, although we know from his book that he was working at a leisurely pace and preparing his first Willy the Kid annual at the same time. All but three of the 25 Badtime Bedtime Books that came out in 1975 were illustrated by Mr. Baxendale but the decline of the feature was very much on the horizon. 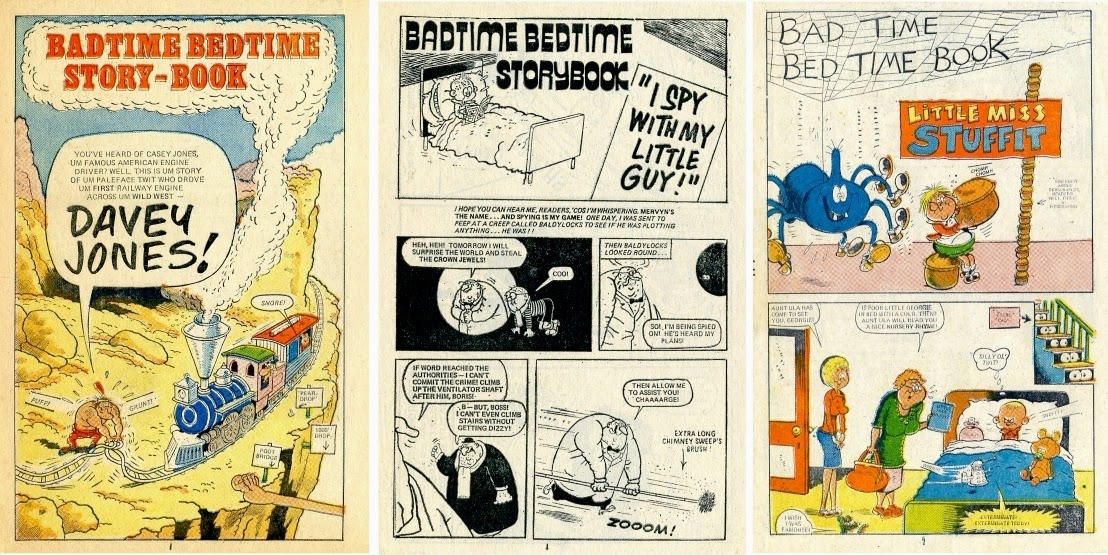 By the time he had to prepare the first MONSTER FUN COMIC issues of 1976, Bob Paynter had run out of Badtime Bedtime Books supplied by Mr. Baxendale, so he tried experimenting with a few other artists. IMHO, three of the illustrators (Artie Jackson, Leslie Harding and even Terry Bave) weren’t really up to the task, and the five BBBs that appeared in the first months of 1976 were particularly poorly drawn. Things improved considerably when Bob Paynter gave the artist’s duties to Mike Brown who was able to imitate Leo Baxendale's style to perfection, adding his own twist to it. The Editor must have been satisfied, as confirmed by the fact that towards the end of the run the frequency of BBBs was restored to its previous levels. Mike Brown proudly initialled or signed most of the sets, so he must have been pleased with his work as well. 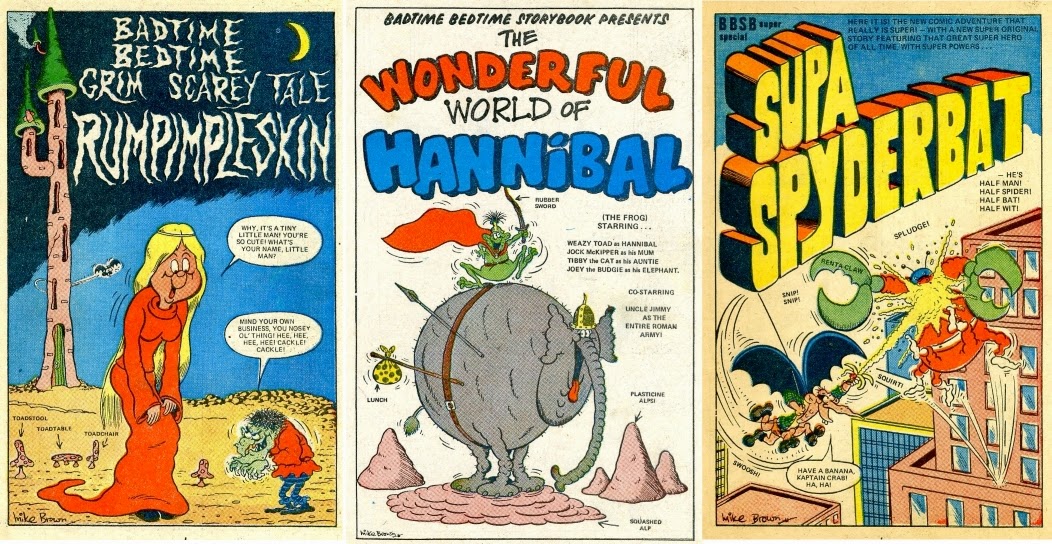 The MONSTER FUN COMIC run of Badtime Bedtime Books falls into three “periods”: 1) the Leo Baxendale period, 2) the “grey” period when they were drawn by other artists, or when Leo Baxendale’s simplified style or ghosters’ efforts make one wonder who really illustrated them, and last but by no means least 3) the Mike Brown period.

I will cover the three periods in my next posts. In the meantime, here is the Badtime Bedtime Book poster from MFC No. 36 dated 14th February, 1976. Drawn, I believe, by Leo Baxendale. 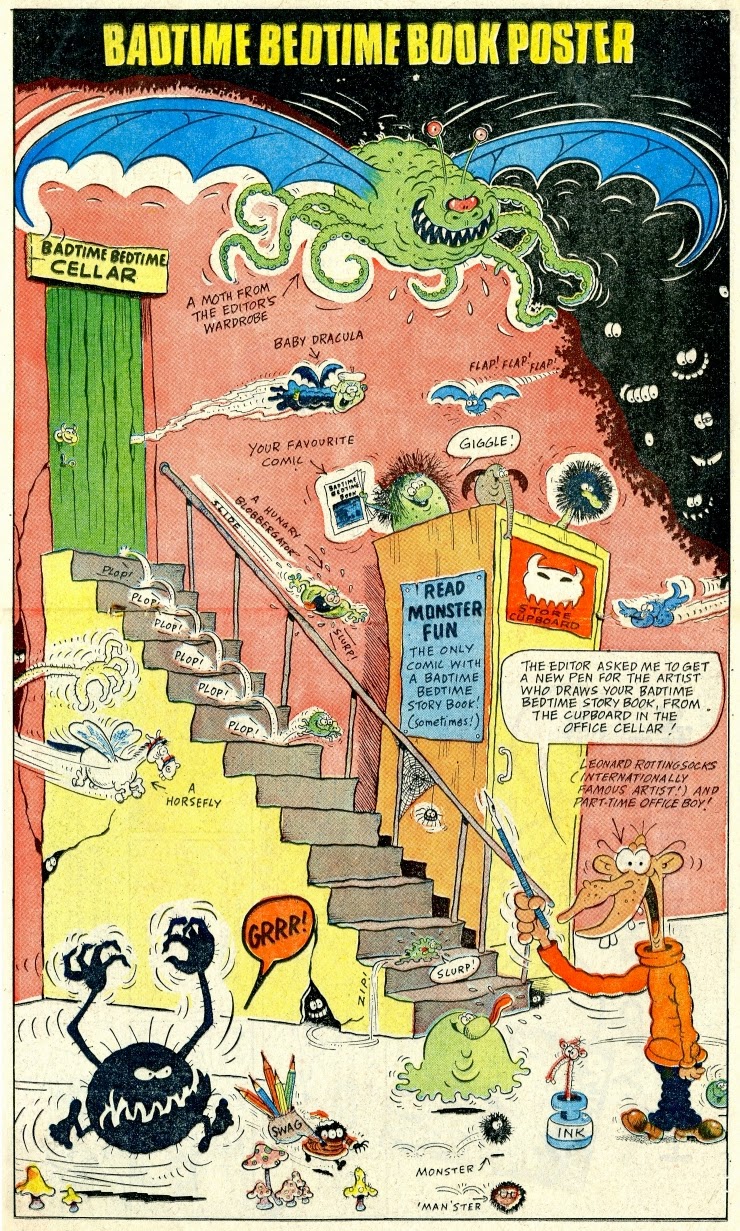