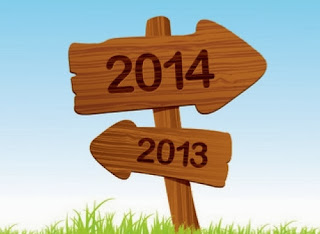 The end of the year is a good time to look back and see where my collecting hobby and enthusiasm for UK comics has taken me and what lies ahead... First of all I am very happy and proud I completed a detailed overview of SHIVER AND SHAKE that is easily one of my favourite British comics. I was hoping it will be a kind of an introduction to the epic quest of covering the entire eleven-year run of WHOOPEE! – the comic that is responsible for triggering my interest in British comics in the first place. I have compiled a detailed index of the title and all of its strips but it looks like the WHOOPEE! tribute project will have to wait because I’ve picked another IPC comic for 2014. As opposed to 567 issues of WHOOPEE!, MONSTER FUN COMIC had a modest run of just 73 issues (which is even less than SHIVER AND SHAKE at 79) and I am confident I can comfortably manage it over the next 12 months. 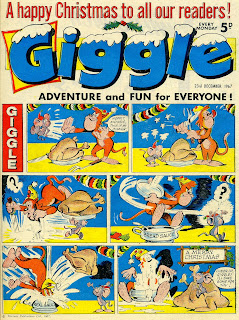 My other quests for 2014 (and beyond, if necessary) include completing the runs of BUSTER (only 9 issues remaining, plus 4 issues that I need to upgrade condition-wise) and SPARKY (41 issues remaining, including 6 issues that I need better copies of). I am also determined to collect a full set of GIGGLE but it’s a tough one and I still need 16 issues (of the total of 38). In keeping with the theme of the Holiday Season, here is the front cover of the only X-mas number of the title:

This year I was lucky to pick up a few large joblots of The Dandy and The Beano from the 70s and the 80s, also a nice long run of early NUTTYs. Buying large joblots appears to be an excellent idea because comics tend to come in uninterrupted runs and often in fine condition, with pink flyers and even free gifts intact. As an extra bonus, the joblots that I bought were outrageously cheap. I took them to the local binders and had them bound in half-year hard-cover volumes. The only difference between my bound sets and those sometimes offered by phil-comics on eBay is the absence of printed text on the spines of my copies (which makes them look like dull office ledgers from the outside) but I intend to compensate with bright dust-jackets. The plan is to collect complete runs of the Dandy and the Beano from 1970 until the change of format in the late 80s and have them packaged nicely in half-year books. I am also doing pretty well collecting the Beano and the Dandy of the 60s but I have no plans to have them bound. They will all remain individually bagged and boarded because that’s how I believe they should be stored.

I often tell myself my collection is nearly as complete as I’ll ever want it to be and I should put my hobby on hold. The problem that I’ve got is that I have to be very careful reading Comics UK Forum and some UK comics blogs because sometimes I unexpectedly bump into unfamiliar titles and artists that fascinate me and I get carried away again... 2013 was the year I discovered young children’s magazines and comics, such as TREASURE, ONCE UPON A TIME and PLAYHOUR, and in them such artists as Woolcock, Quinto, Mendoza and Hutchings, drawing many first-rate features and strips, such as Gulliver Guinea-Pig in PLAYHOUR. This smoothly brings me back to the subject of the Holiday Season and those scrumptious festive numbers. PLAYHOUR took their Christmas very seriously in the early 60s and played the theme throughout December on the covers and in Gulliver Guinea-Pig tales inside. Check out these images from the X-mas edition of 1960 (unfortunately, the only one from December that I’ve got from the year so far). Artists’ signatures tell us the front cover is by Gordon Hutchings and Gulliver Guinea-Pig by Philip Mendoza. 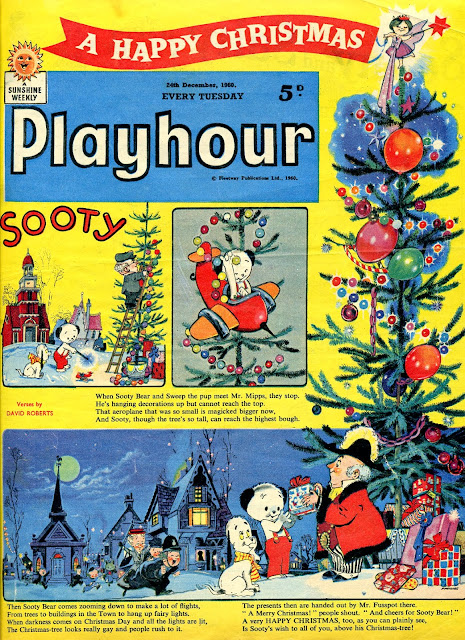 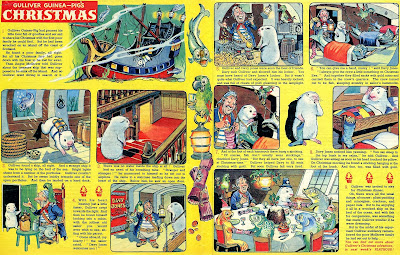 In December of 1962 PLAYHOUR ran a three-week story Gulliver Guinea-Pig and the Christmas Toymakers illustrated by Hutchings, and in 1963 – another three-week tale of Gulliver Guinea-Pig’s Travels in which the Toymakers invited him to trim Father Christmas’ beard. I will save those for some other time but here is the cover of a 1963 Christmas edition (the last one of the three from that year) and a sweet little X-mas tale from the same number. The cover is somewhat unusual in that it has no sign of snow – was the greenhouse effect already at work in 1963? 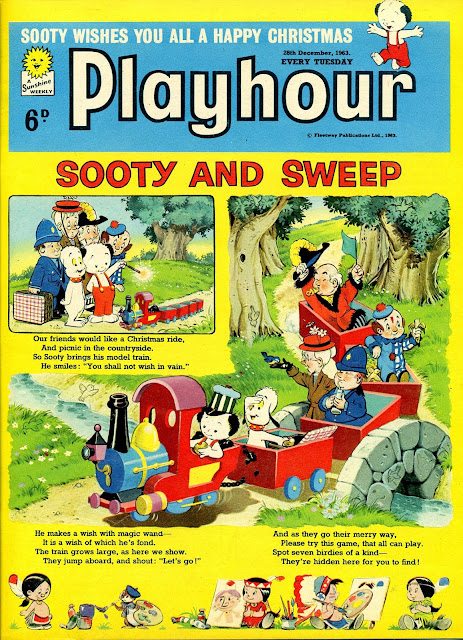 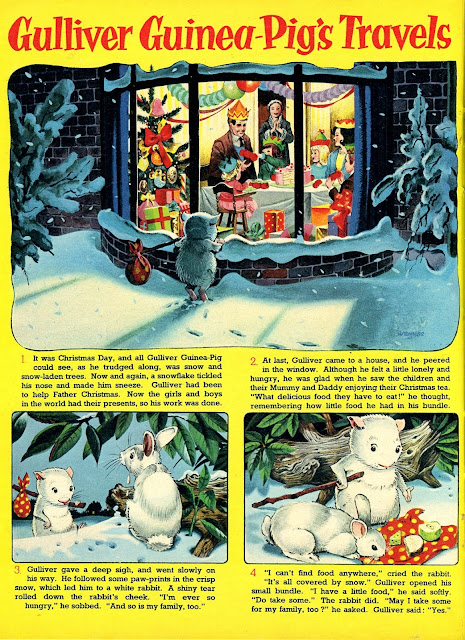 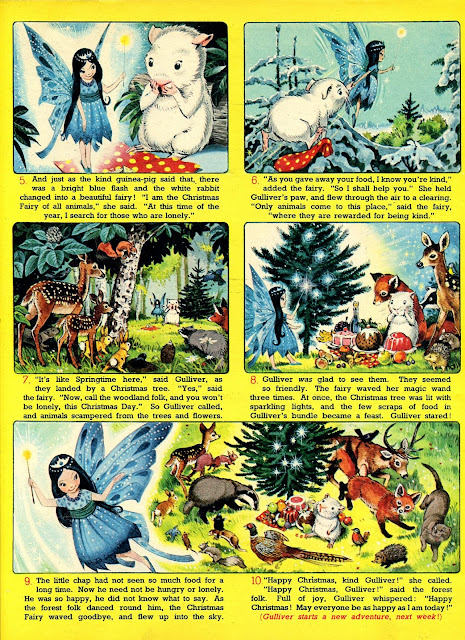