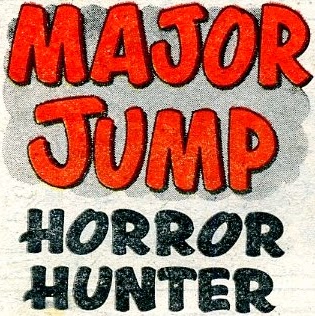 Next in line is another excellent example of the comedy horror genre. In the introductory episode of Major Jump Horror Hunter in MFC No. 1 we meet Major Jump – owner of a large estate who realises that the only way he can keep it going is by opening it to the public and making it into a monster menagerie. His original idea is to catch and exhibit some big exotic animals, and in Major Jump’s vocabulary ‘monster’ means ‘big’ – at first he doesn’t even believe in real monsters. The Major owns a special flying craft that can go anywhere, now all he needs is a ‘willing lad assistant’. Enter Cosmo Crumpet – a daft bespectacled young man, and his pet Meredith – a real monster creature who looks like a big fat slug. This comes as a shock and a revelation to Major Jump – if monsters do exist, he can make it a real monster menagerie!  Meredith is hired as the keeper of the future monster zoo, while the newly-converted believer in monsters Major Jump sets off on his first monster hunt accompanied by his freshly-employed assistant Cosmo: 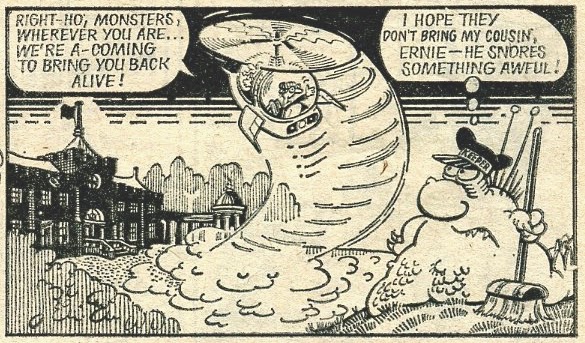 This looked like a nice idea for a strip but having read the second episode I was a bit disappointed: Major Jump and Cosmo got a phone call from a Scottish gent who complained there was a monster mouse lurking around his house. They rushed to Scotland and set a monster trap for the creature, only to discover the hard way it was not a giant mouse but a giant moose. The gag was OK, but I thought, oh no, are they going to screw this up by doing another version of Ghoul Getters Ltd, only with monsters instead of ghosts?!. Ghoul Getters Ltd. was a super strip that originated in SHIVER AND SHAKE and continued in the combined WHOOPEE! & SHIVER AND SHAKE, but doing another feature with ghost-/monster-busting as the main theme would be lazy, I thought. I am glad my concerns proved to be wrong. In the comming weeks Major Jump and Cosmo went on many an exciting expedition to faraway lands looking for all kinds of monsters with crazy names such as the 1003 –Eyed Monster, the Australian Elastic-Pouch Kanga-Wanga, the Blundering Backwards Galloper, the Two-Headed Bombay Pompadonkle, the Great Spotty-Nose Twittyclot, the Sneaky Wikiki-Freaki, the Great Polar Elephant Seal, the Terriblosaurus, the Nagasaki Nosher, the Fabulous Foozlum Bird, etc. The hunt involved the use of an arsenal of silly disguises and traps as well as a hypodermic syringe loaded with tranquilizer. Major Jump was usually the one who designed the wacky monster-catching schemes and the poor Cosmo had to do all the tricky work. 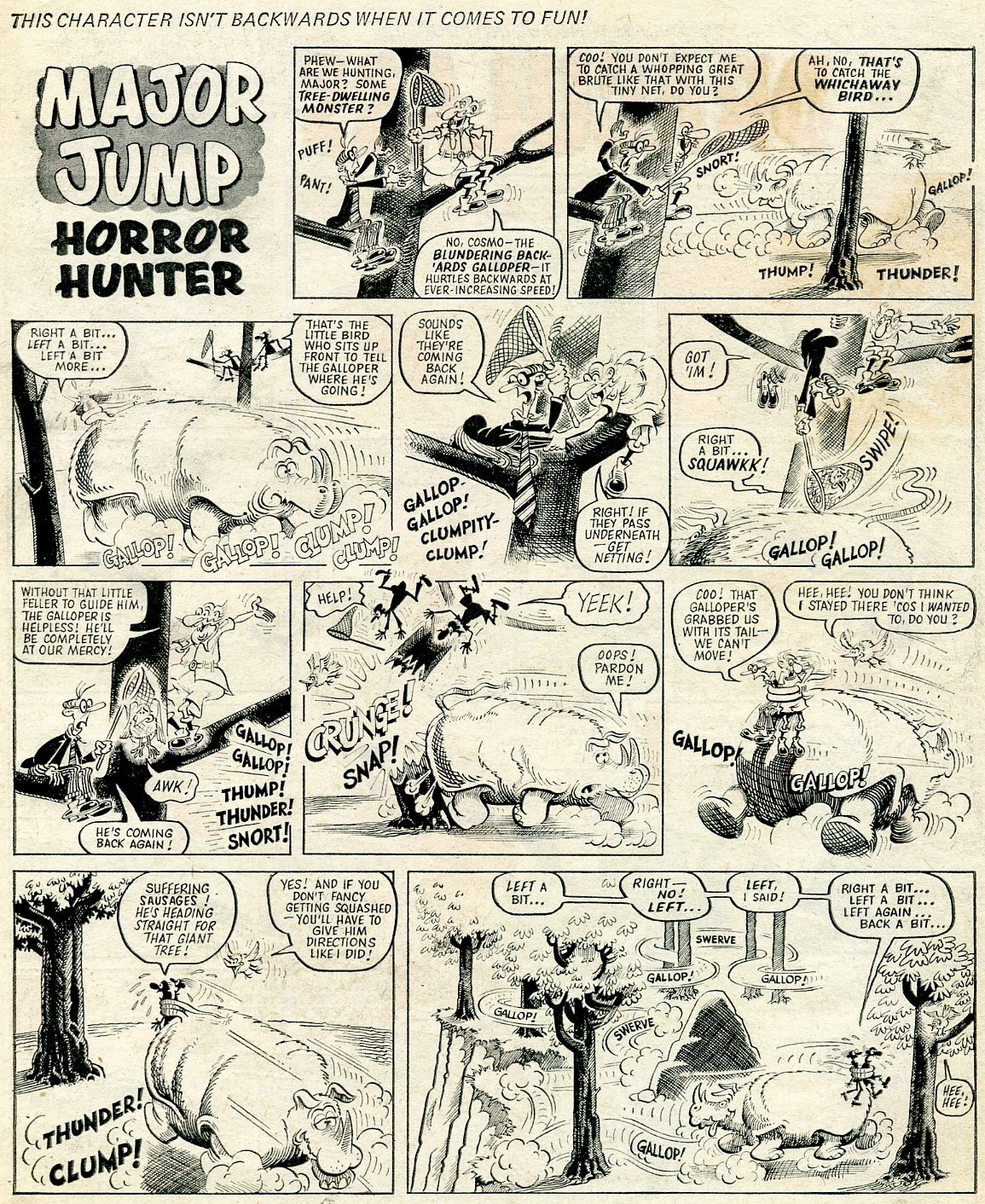 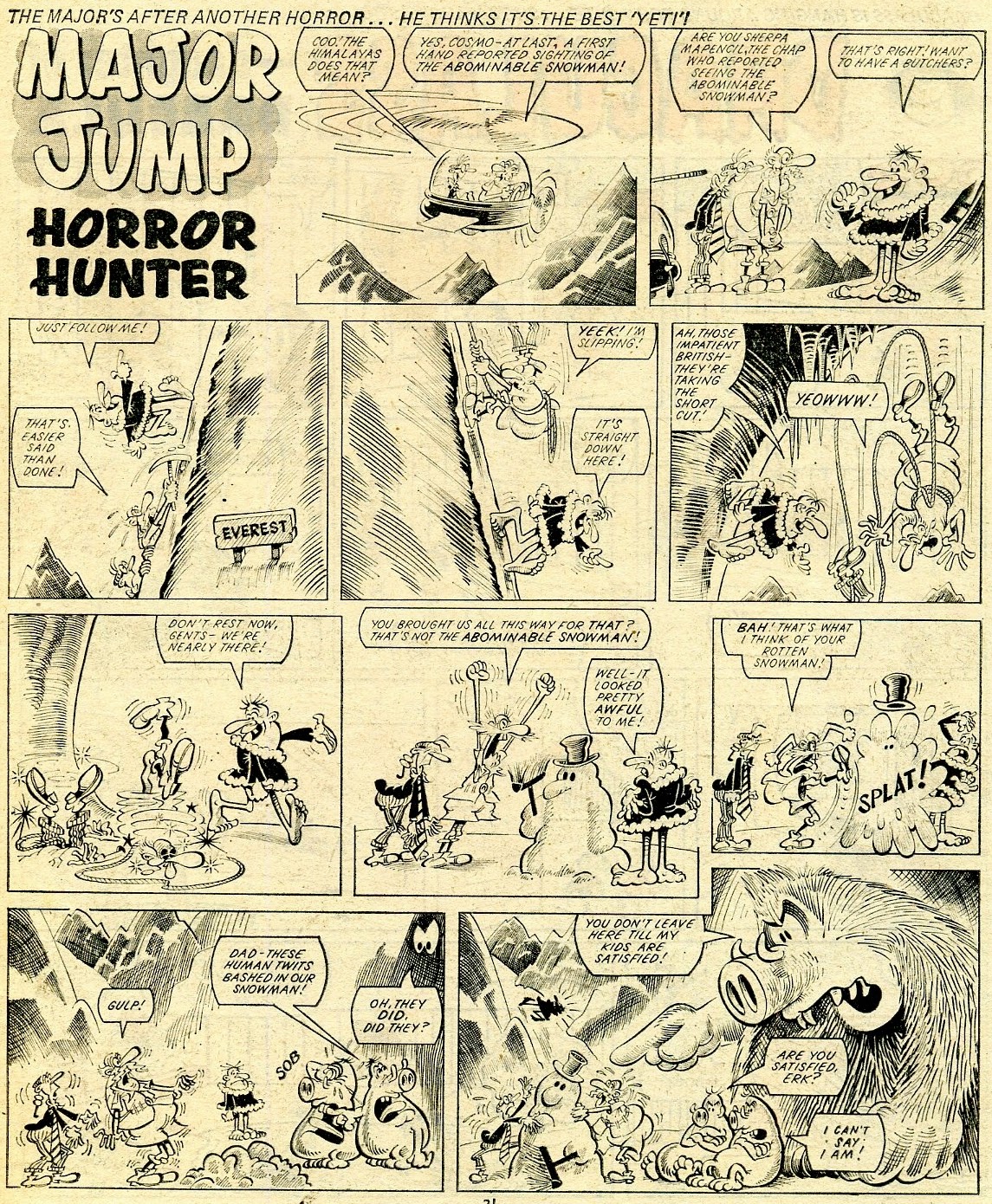 Although the schemes frequently misfired and landed the two monster hunters in trouble, the menagerie was soon chock-full of weird creatures. What I like about the strip is that it didn’t become repetitive by focusing on monster-hunting adventures but alternated between the expeditions and daily life at the zoo. Check out a couple of examples below. The one about benefit tourists is my favourite: 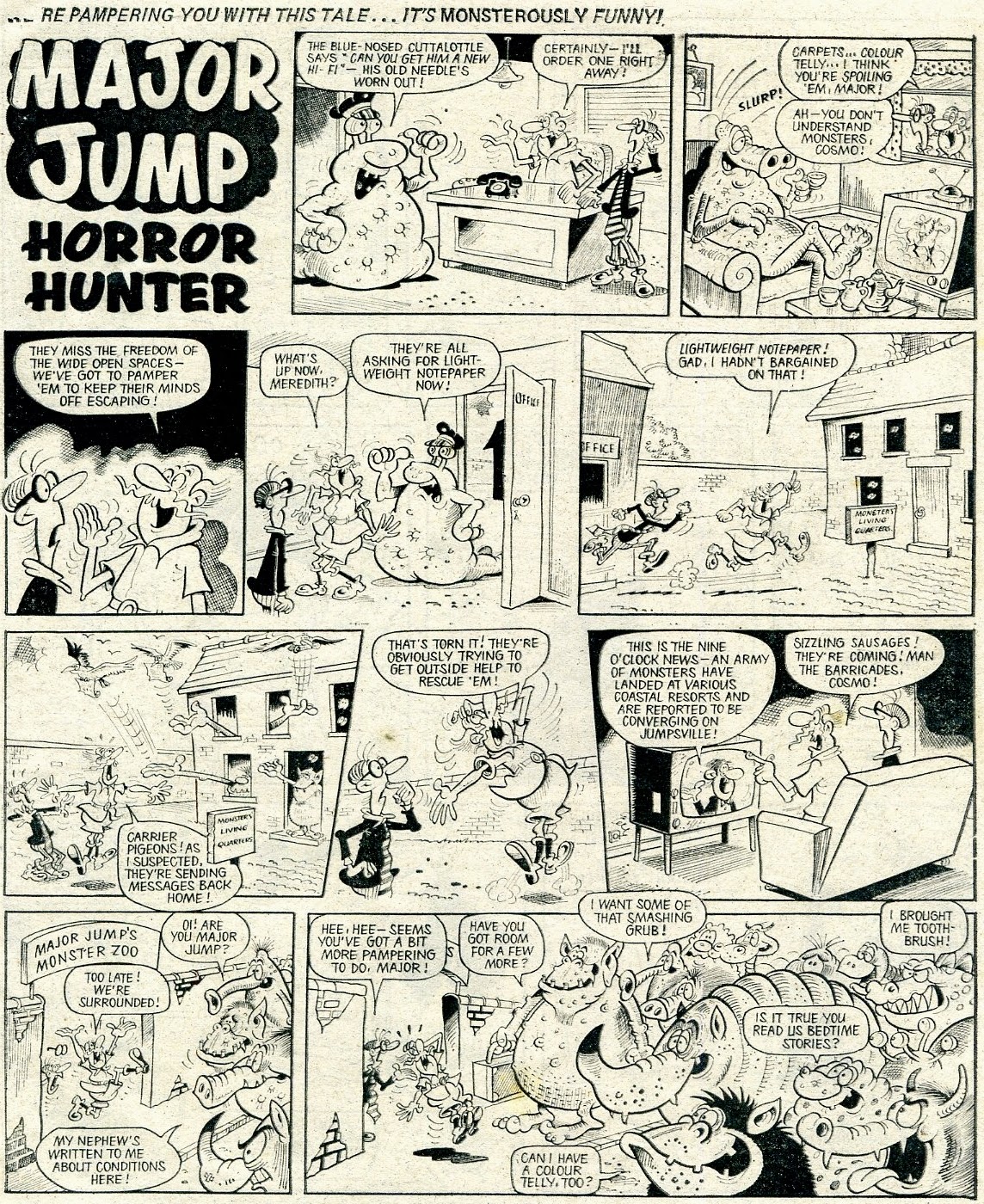 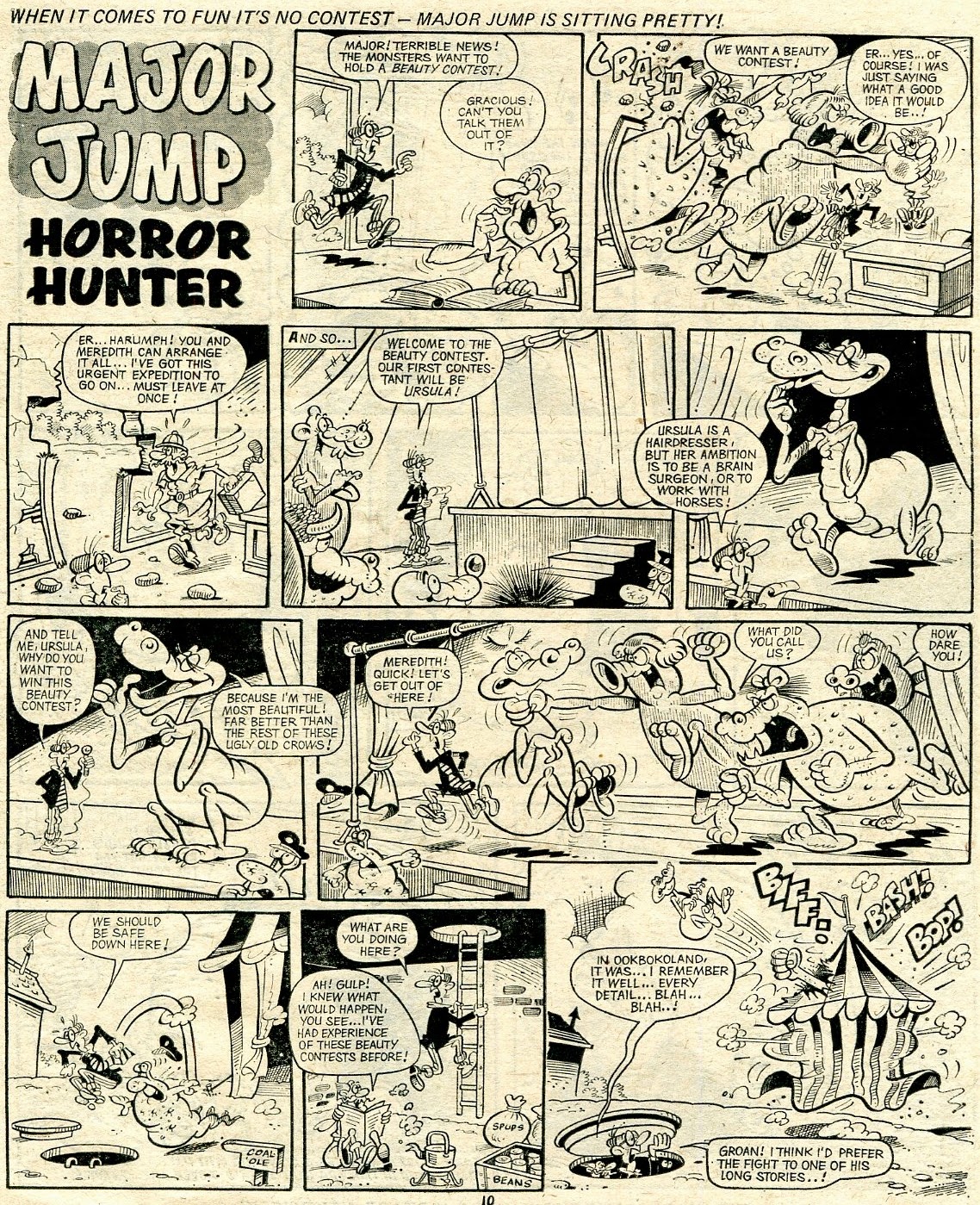 In issue 56 Major Jump and Cosmo captured the Horrendous Heeblyjeebie – the ugliest monster of them all. It was so hideous they had to keep its face covered, which prompted the announcement of a one-off participation feature offering five £1 prizes to authors of Heeblyjeebie’s best portraits. It isn’t clear who announced the competition but it looks like it was Major Jump himself. The Horrendous Heeblyjeebie was also seen in the next week’s episode (in MFC No. 57), here are both sets in sequence: 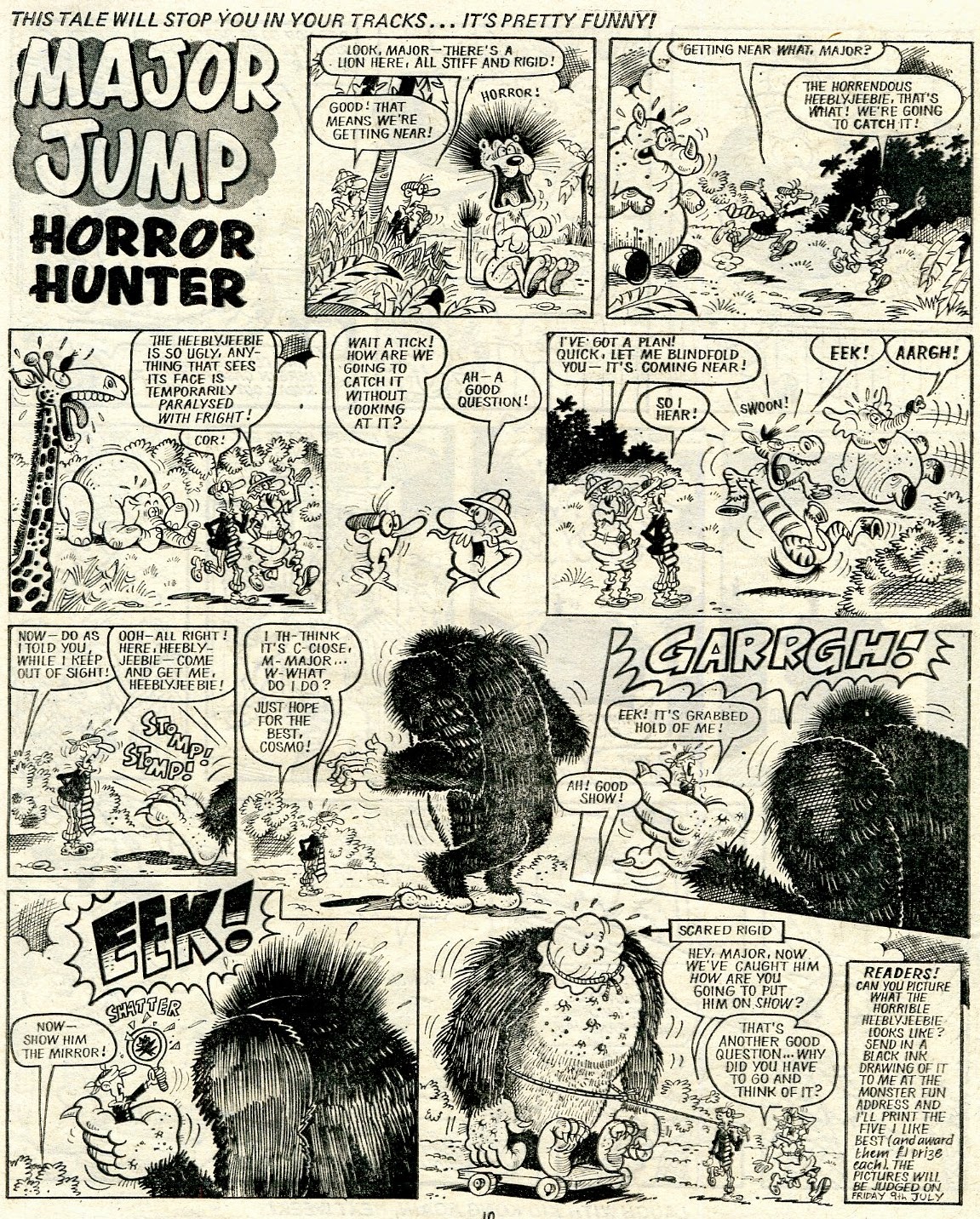 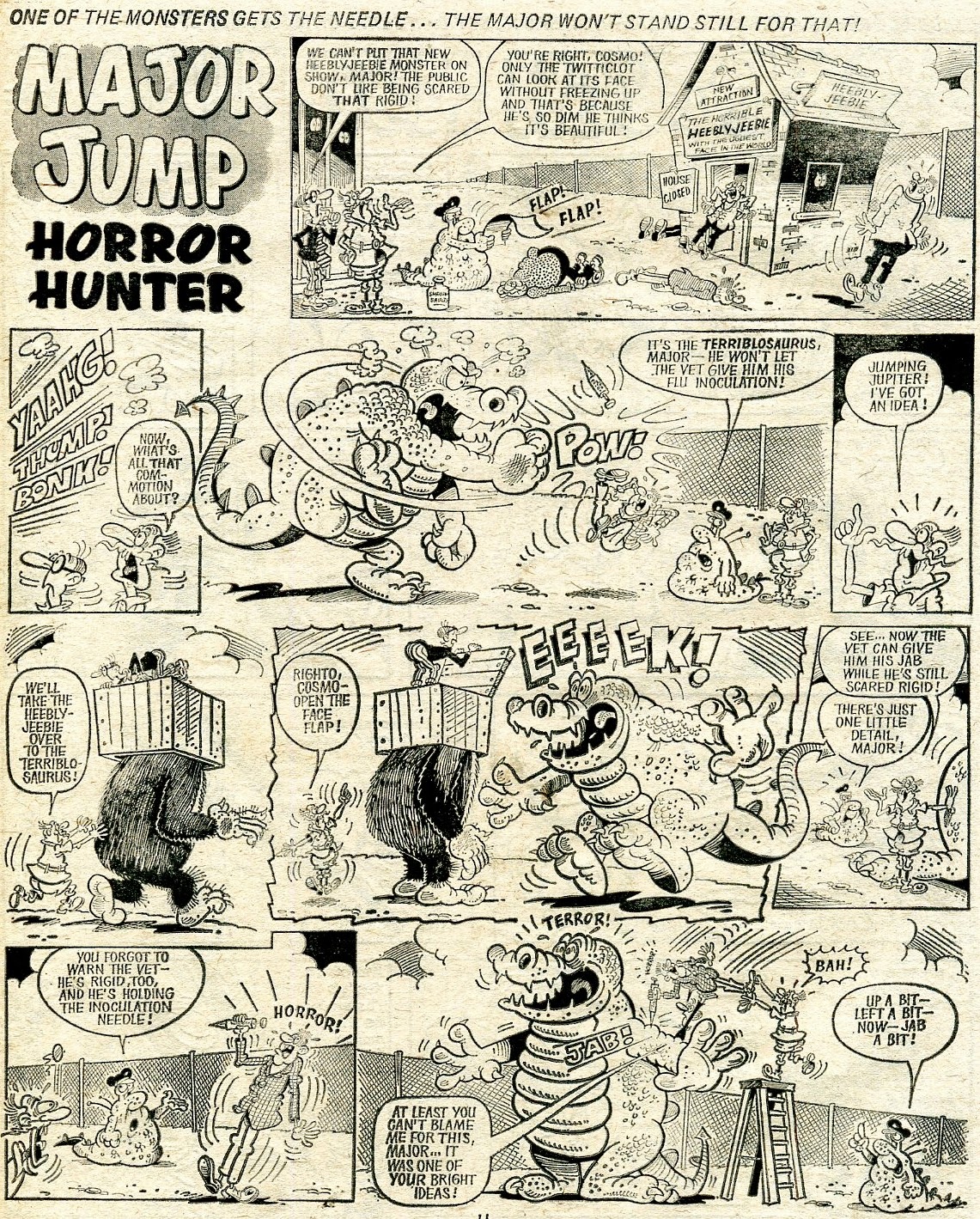 The five best portraits were printed in MFC No. 66 and the lucky winners must have been delighted to discover that for some reason their £1 prizes had been doubled: 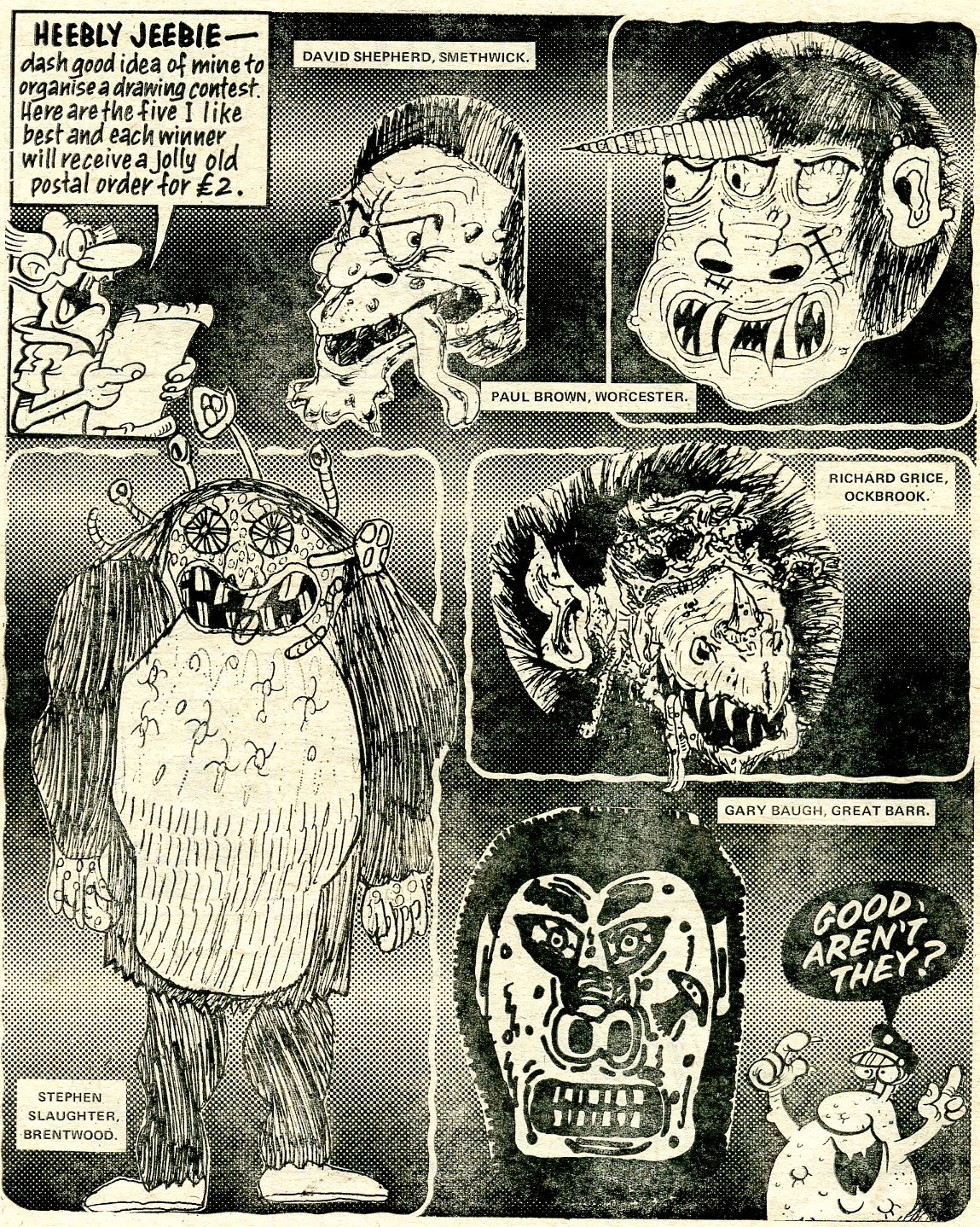 It appears that initially the illustrator was Ian Knox, although none of the episodes were signed (as opposed to Terror TV – Ian Knox’s other strip in MFC, of which only a few episodes weren't signed). Starting from issue No. 34 another artist who I believe is Barrie Appleby took over. The one-pager ran in MFC issues 1 – 72 and missed issue Nos. 15, 25, 31, 39, 51, 52, 55, 58, 61 and 65. All sets were in black and white except for the full-colour episode on the back cover of MFC issue No. 67.

All in all, Major Jump Horror Hunter was a witty, well-written and beautifully presented strip but there are two things I find disappointing about it. Firstly – I think it deserved a proper ending (the feature did not make it to the combined BUSTER AND MONSTER FUN and disappeared without a warning after the penultimate MFC edition).  Secondly, I think it would have been great if they had shown the Horrendous Heeblyjeebie’s real face…

Come back soon for a look at the hideous Creature Teacher!