This is part two of my detailed look at MONSTER FUN ANNUAL 1978. You can read the first part in the previous post HERE.

Ian Knox illustrated and signed the three-page set of Terror TV lampooning Top of the Pops with Tony Blackout (= Tony Blackburn) as host. Here we meet some performers who are now almost forgotten:

... and some stars who are still big today: 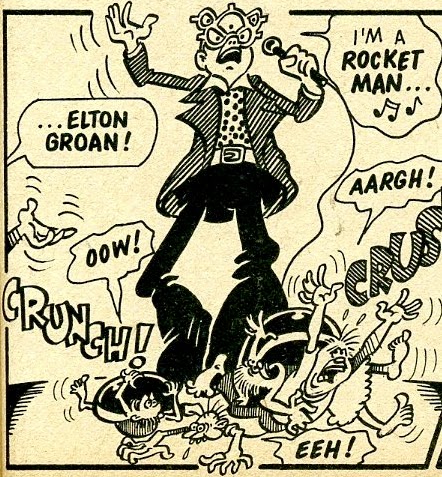 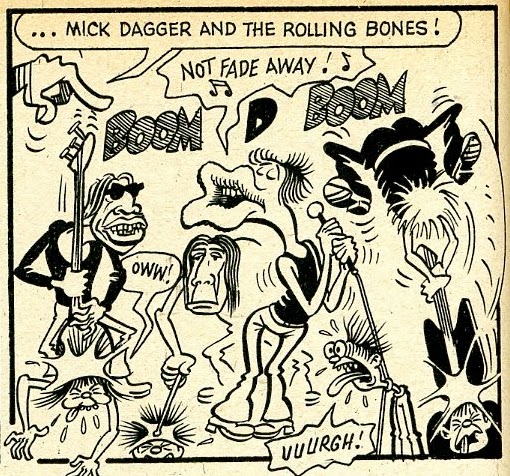 Both two-pagers of Ticklish Allsorts with Les Barton artwork were in the best tradition of Monster Fun Comic weeklies. Here is one: 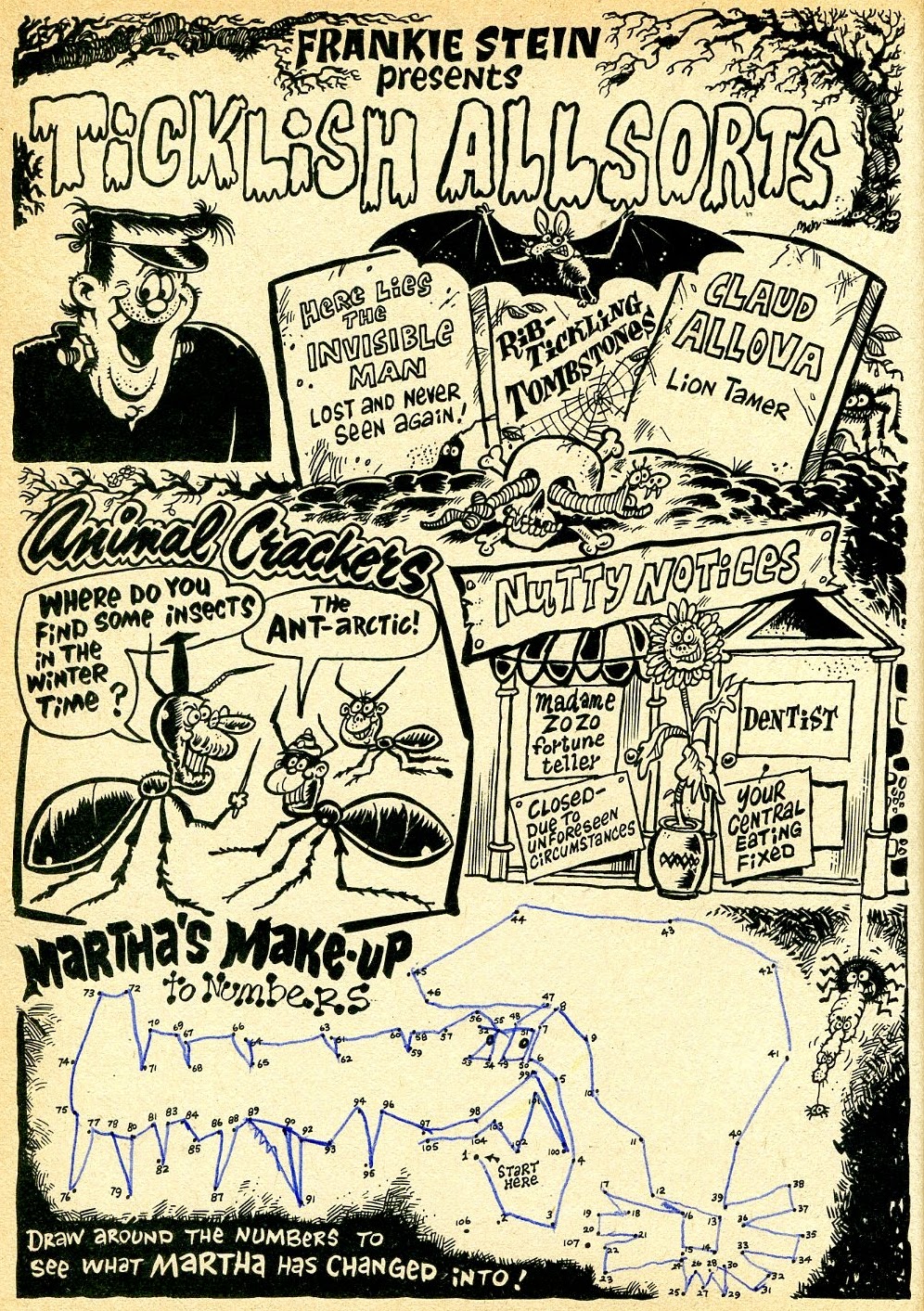 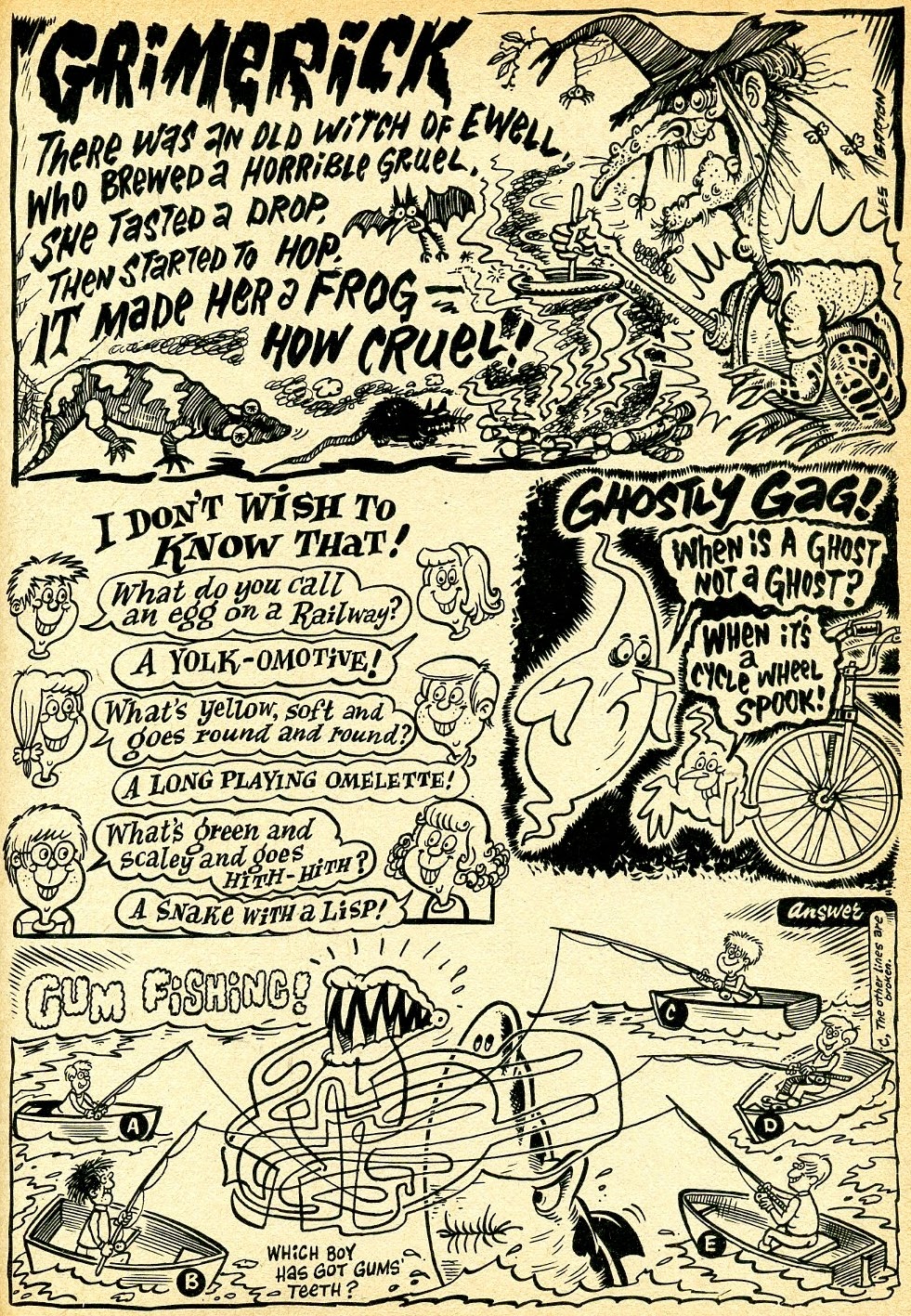 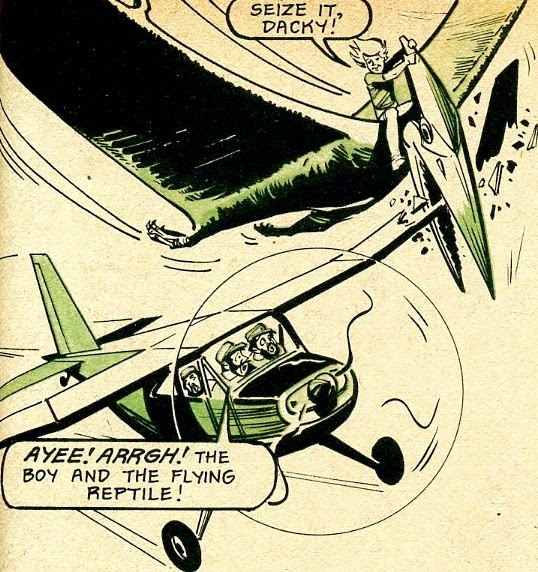 The book had another story of Terry and the ‘Dactyl, the second one after 1977 Annual. In it Terry Briggs and his pet – the great flying prehistoric reptile – descend from their home in Inca gold city high on a plateau to recover the gold plate which they accidentally dropped down. Down on the ground, they confront a ruthless gang of bearded desperado raiders and liberate Argentine doctor senorita Isabella Mendez whom they have kidnapped for ransom. The gorgeous good doctor rewards the lad with the gold plate given to her as a gift by the natives, and Terry and the ‘dactyl return to the safety of their home on the great plateau. The best thing about the story is that the illustrator had sneaked in his signature in one of the panels which helped me identify him as Giorgio Giorgetti. This means that I can now confirm the name of the artist who illustrated quite a few adventure strips in IPC comics, including The Ghostly Galleon in SHIVER AND SHAKE and most importantly Rat Trap in COR!!

The Annual had one more adventure thriller called The Menace of Formula X. It first appeared in COR!! weeklies and all 20 pages of the original story were reprinted the Annual. I covered it in detail HERE a couple of years ago.

Other reprints included the usual selection of Hot Rod, Stoneage Brit Ancient Nit and The Robot Maker, all re-arranged into two-pagers and some coloured-in. With the two installments of The Robot Maker in this Annual, the number of reprints of the strip in MFC publications summed up to 19 which meant that the stock of original episodes from the COR!! run in 1970 was now exhausted. 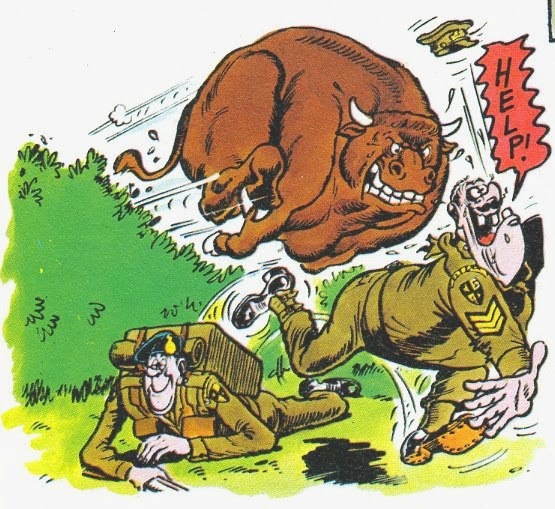 The most exciting thing about this Annual is that it has two Badtime Bedtime Books. Both are classic BBBs in everything except that they aren’t pull-outs.

The Story of Traffic Island by Robert Loony Stevedore is presented by none other than Leonard Rottingsocks – ‘office boy, wit, and prehistoric chip buttie collector’, whatever this means. The Traffic Island is actually a plot of lush greenery inside a busy traffic roundabout. Little Jim Ladd is sent there to fetch the Mayor’s hat that was blown off and landed there. He meets two weird inhabitants of the island – the poor Ben Gooni who was accidentally left behind when the road was built, and the evil Long Gone Silver who was ‘deported’ by the Mayor and now wears Mayor’s hat in revenge. Jim is a smart lad: not only does he recover the hat but he also helps Ben Gooni break free from the island.

The story was interrupted a few times by promotional intermissions featuring the loony Dr. Bonce, 'noted brain surgeon and twit': 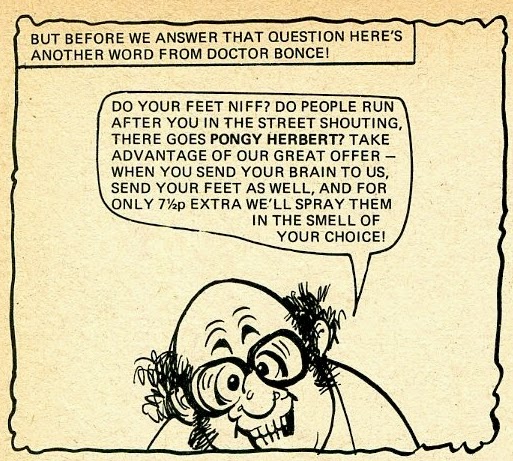 I don’t know the name of the artist but he was not nearly as good as Mike Brown who drew the second BBB - the absolutely brilliant Badtime Bedtime Annual Story Starchy and Butch. Here it is in full: 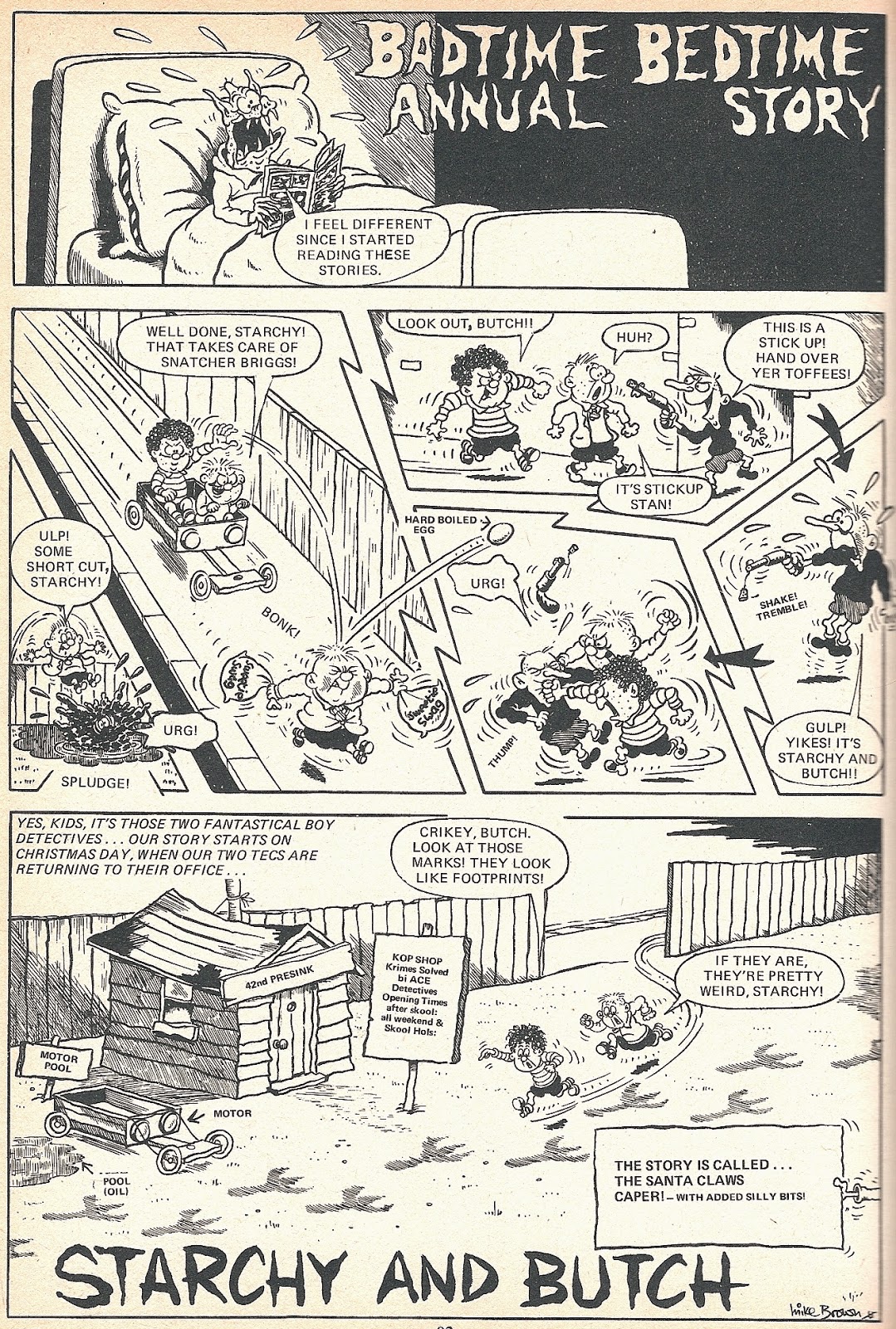 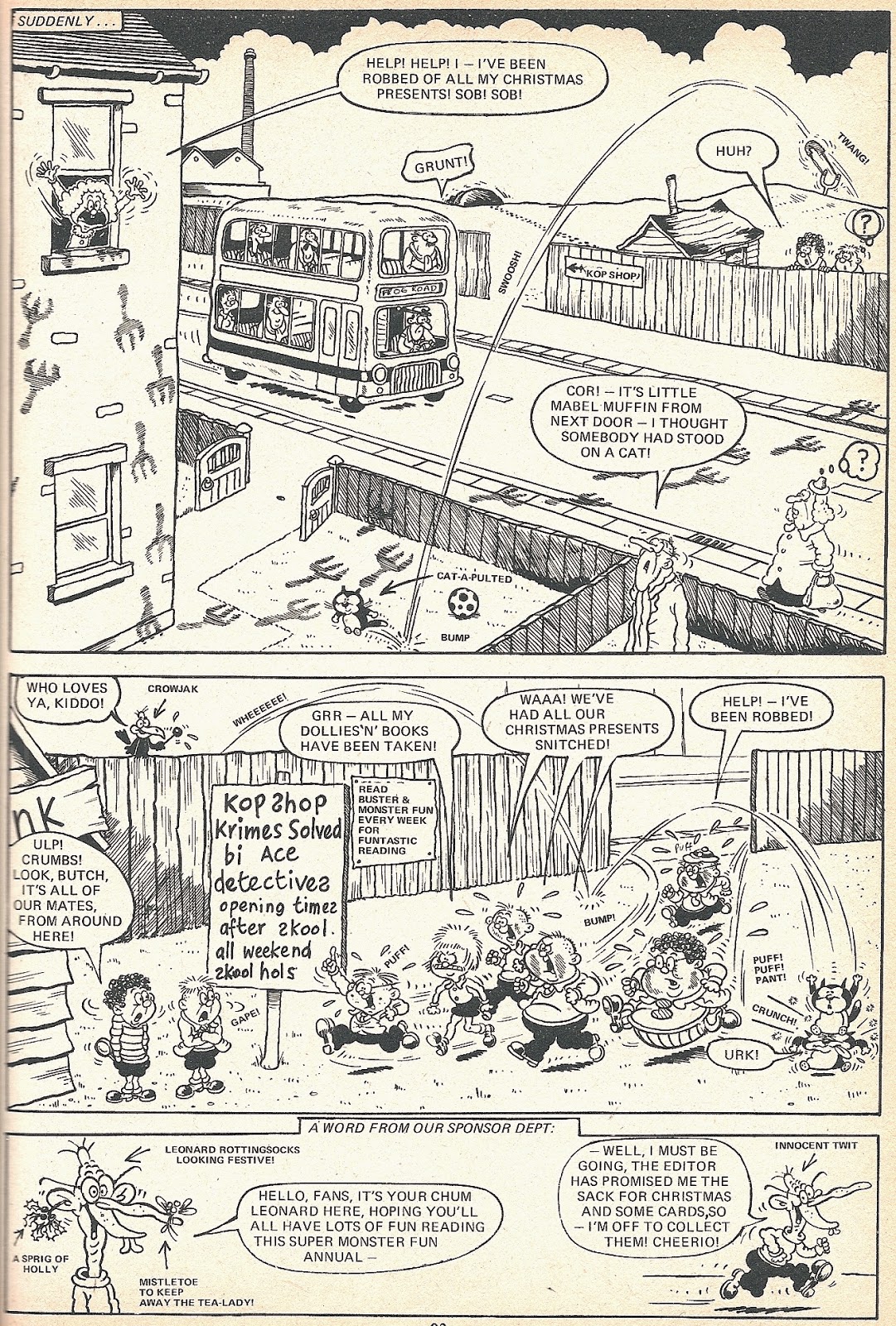 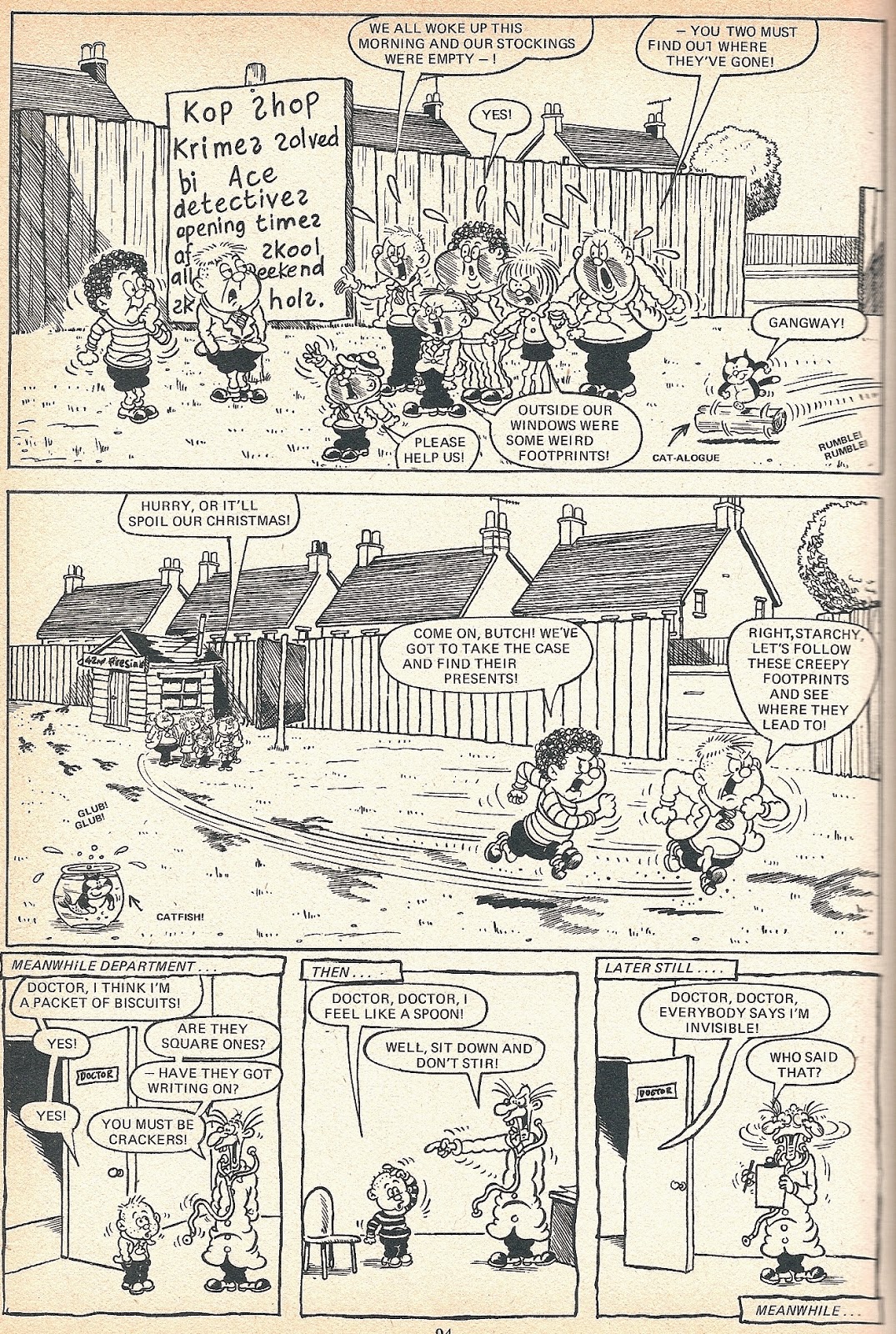 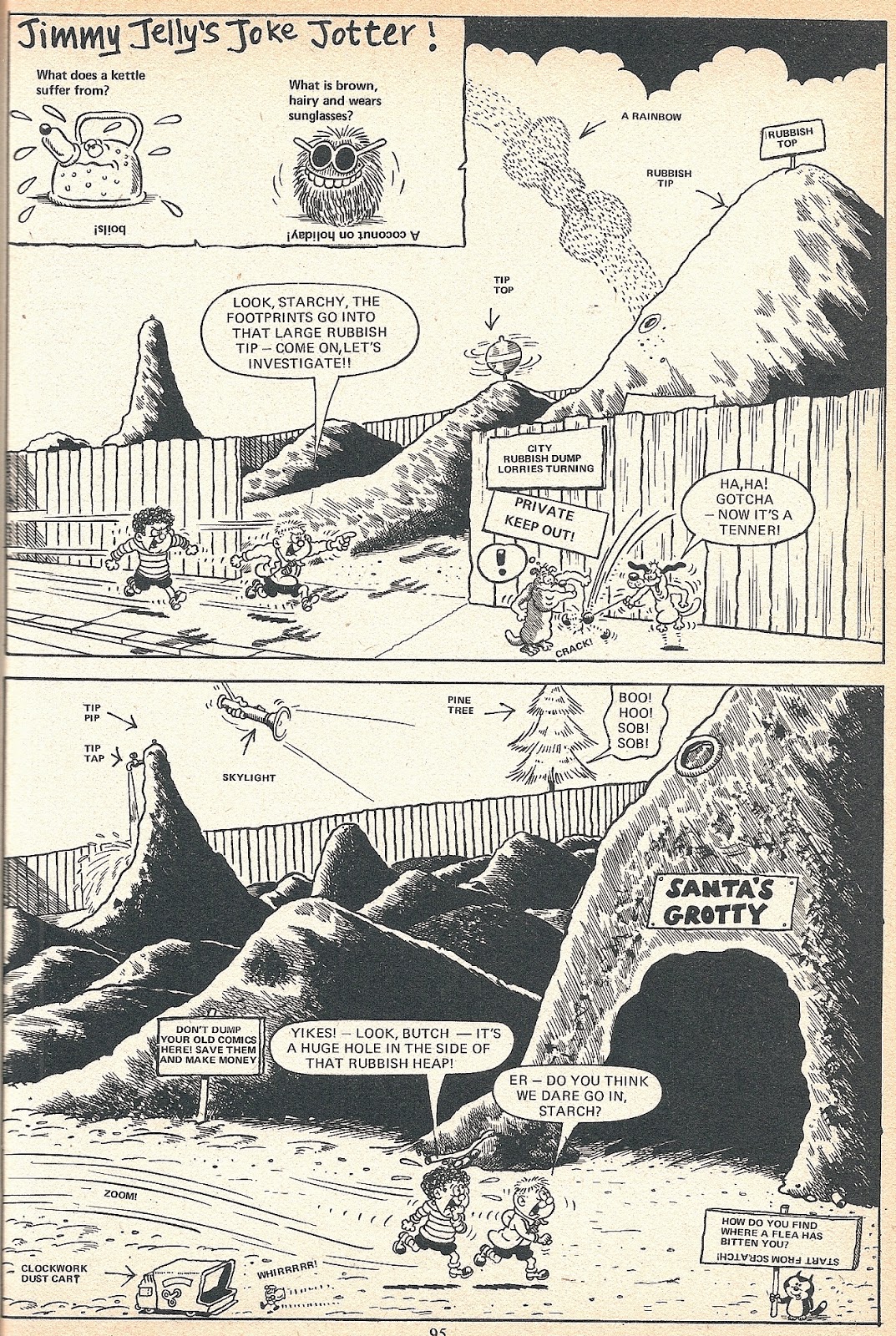 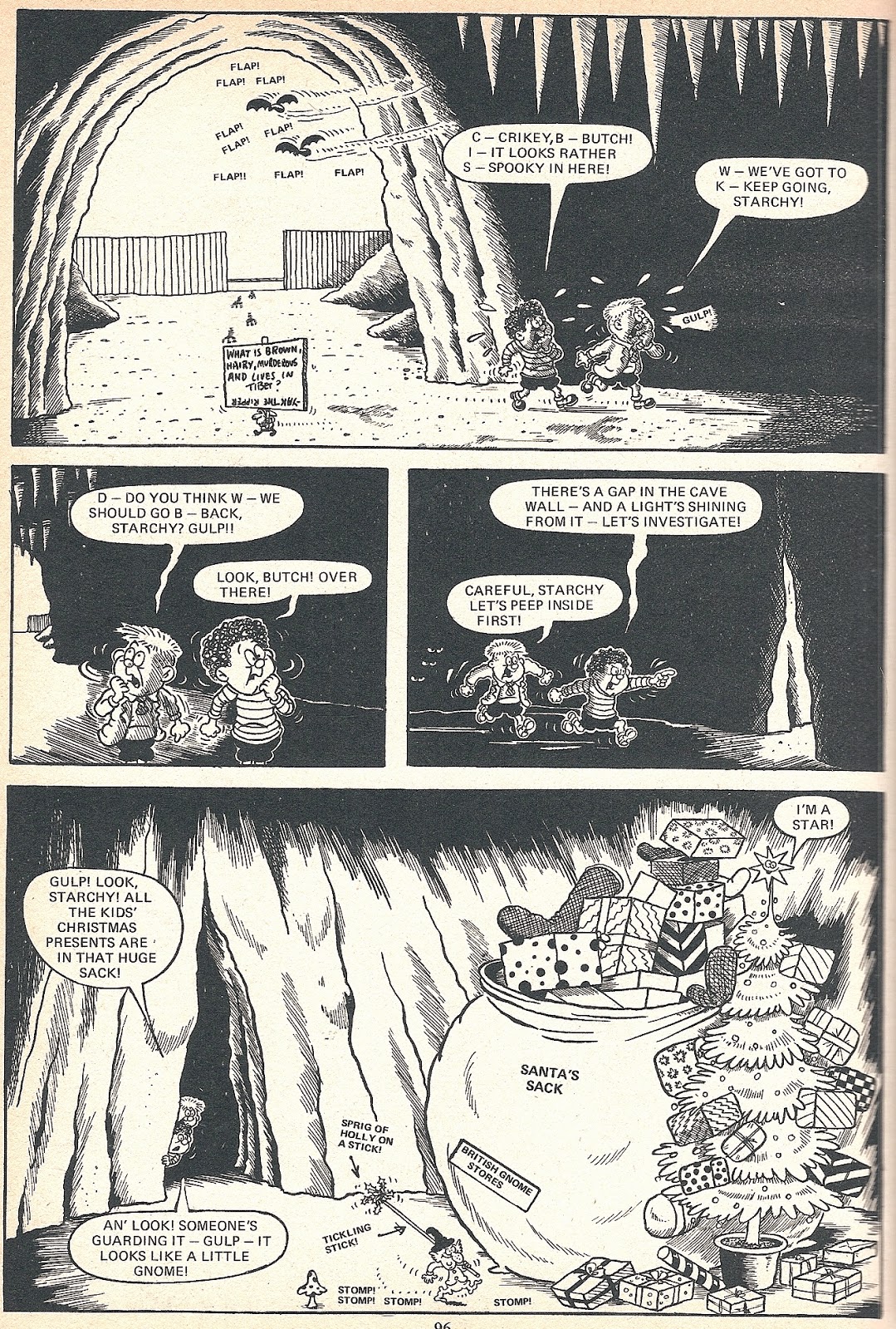 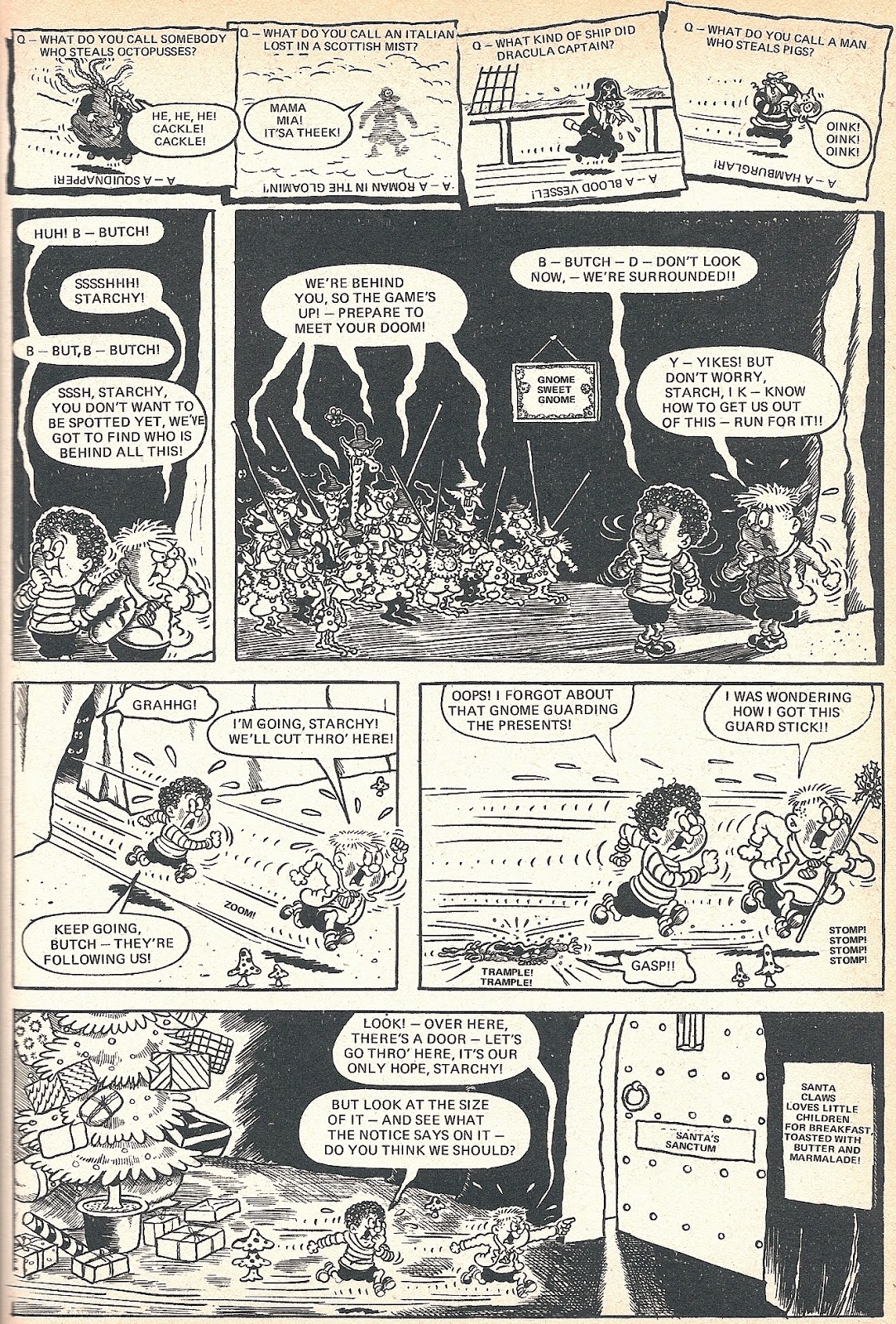 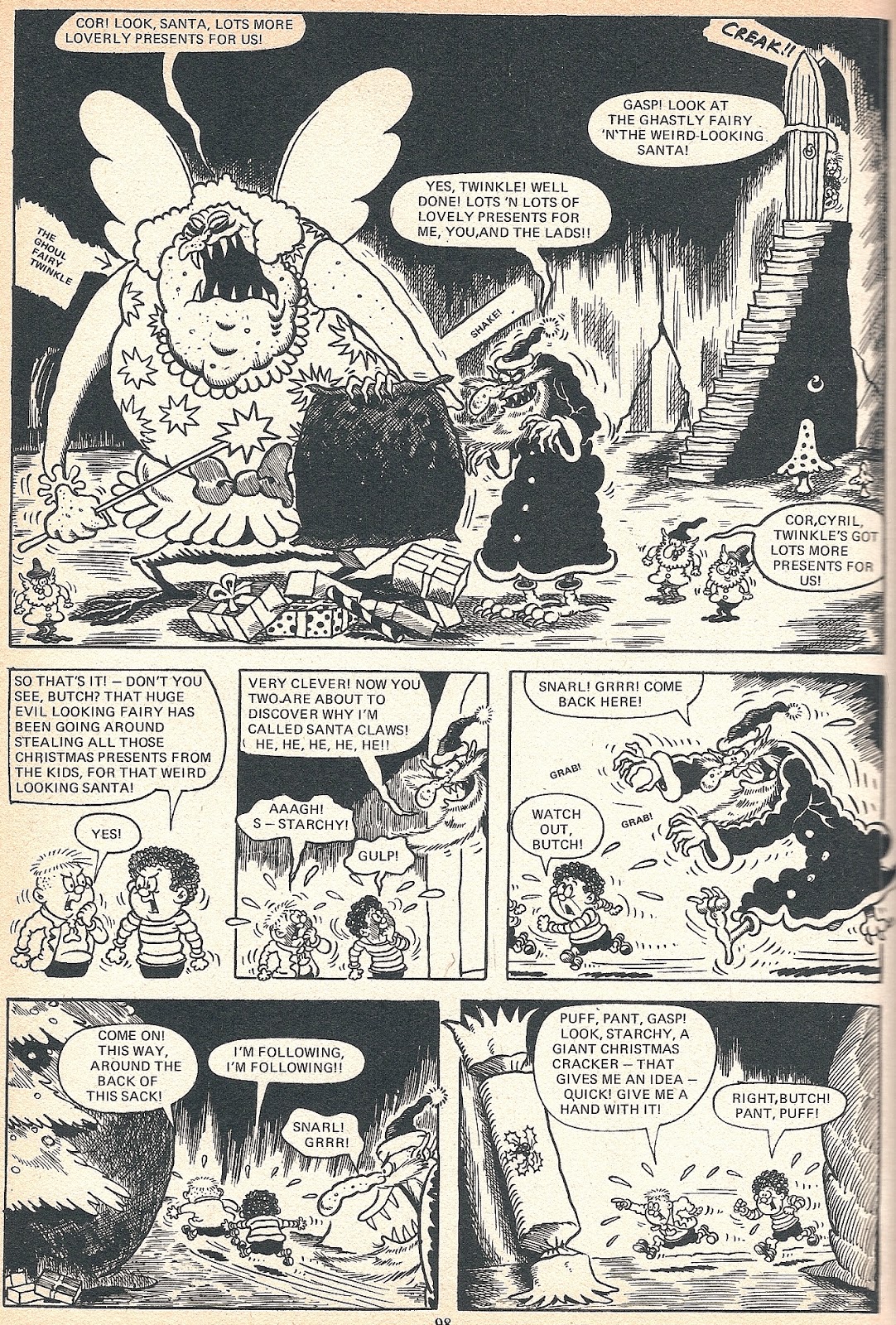 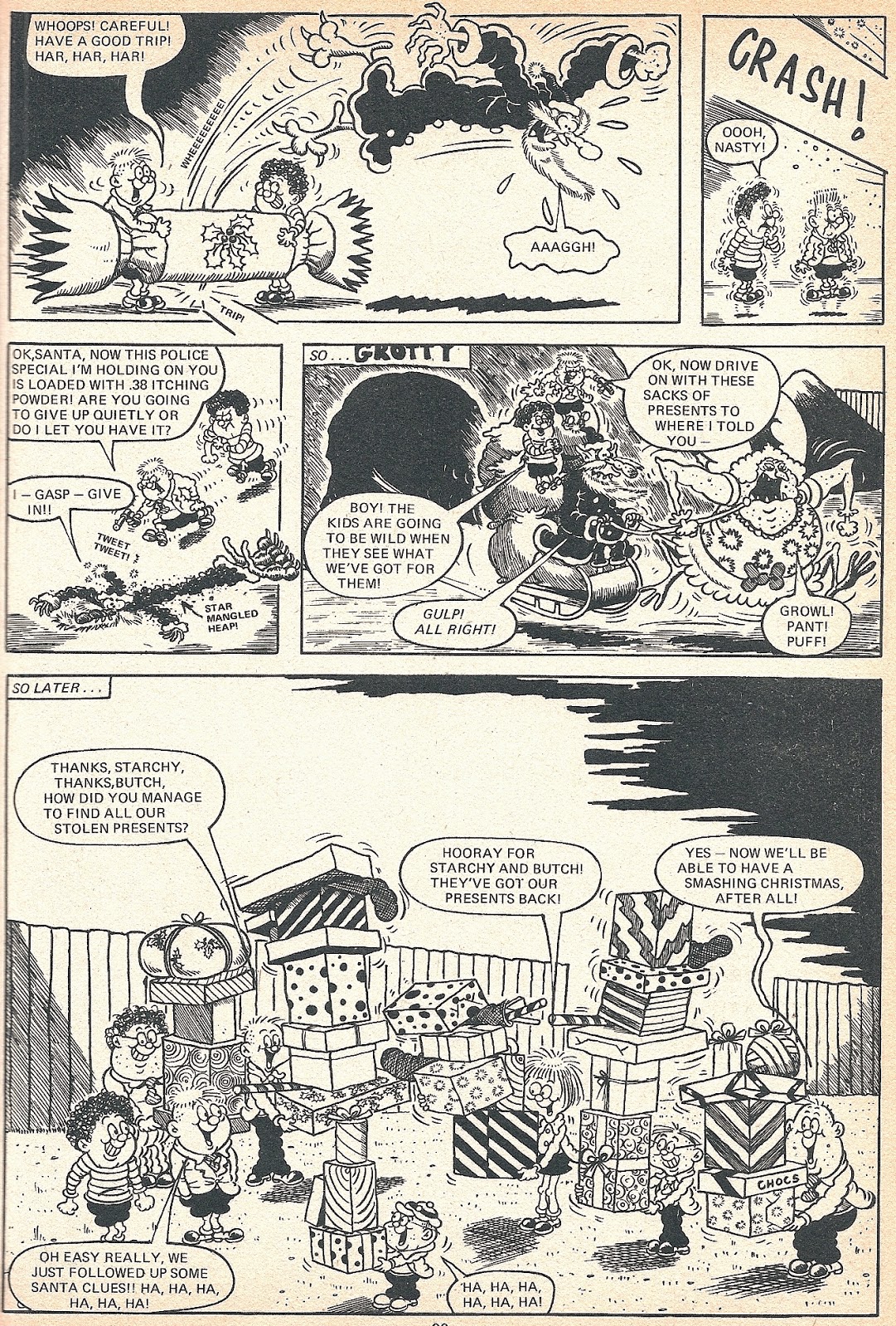 All Images 2014 © Egmont UK Ltd.  All rights reserved. Used with permission.
Posted by Irmantas at 8:22 AM