A LOOK AT COR!! STRIPS: ROBBY HOOD AND HIS ONE MAN BAND, PART TWO


The third story ran from 13th February until 27th March, 1971 (issue Nos. 37 – 43). Robby and Muchflour accidentally find themselves on board a strange empty barge sailing along the canal. They discover that the whole boat is booby trapped. Three dangerous looking men stop the barge and leap on board. Robby and Muchflour hide in a secret compartment in the hull and find themselves in the company of Captain Horatio Spike, a retired Royal Navy officer. Captain Spike owns the barge and has booby-trapped it against the attackers. The background story is that three weeks ago he won a contract to haul coal for one of the local mines but a Ned Tarrant wanted the business so he and his men set to get captain Spike. The thugs fall victim to the different booby-traps but manage to scupper the boat just before jumping ashore. The barge goes underwater. Robby and Muchflour decide to go after the mob. They find Tarrant and his cronies preparing to cast off with their own horse-driven barge. Muchflour launches an unsuccessful attack on horseback and ends up on board the boat, unconscious. Robby follows the barge until it arrives at the coal depot and is about to start loading. He boards the boat and reunites with Muchflour. After a few action-packed episodes Tarrant and his mob throw Robby into the canal. The spectre saves him but since Muchflour is invisible to the thugs, they think that Robby walks on water. The invisible pal helps Robby persuade the thugs that he is a magician and the boy forces Tarrant to sign his barge over to Horatio Spike. 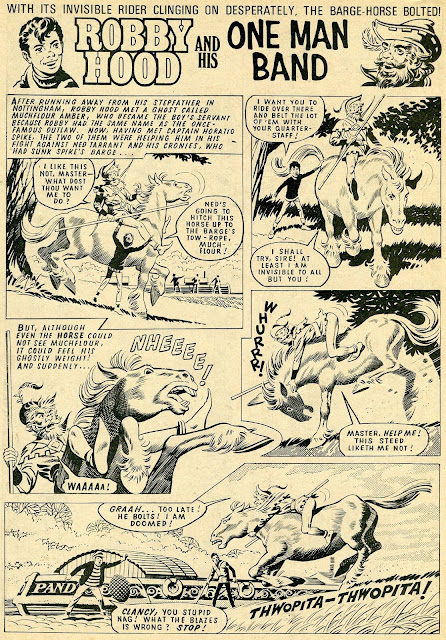 The final story started in the issue of 3rd April and ended in the issue of 24th April, 1971 (issue Nos. 44 – 47).  Muchflour teaches Robby to fire arrows. A stray arrow startles a lady who was painting a picture behind the threes. They carry her up to the house and dial the ambulance but a strange bearded man secretly cuts telephone wires. While Robby and Muchflour are busy trying to revive the lady, the evil man uses a fishing rod to fetch one of the paintings lined along the walls of the room. The lady comes to her senses and recognises the strange man who is Ivan Popoff. The boy and his ghost pal rush forward to get him but Popoff grabs the painting and escapes with his car. The stolen picture is “The Stately Stag”. The lady’s name is Amelia Dawson, she is an artist and art collector. The background story is that she bought the painting 6 months ago. Soon after Ivan Popoff appeared and began to pester her into selling it to him. She refused because she liked the painting, so now he finally stole it. The two friends suspect there is something strange about that worthless work of art. Popoff suffers a car accident and Robby recovers the painting. He discovers there’s another one underneath and it’s a Rembrandt. Popoff confesses that he stole the painting from a famous museum last month, disguised it and hid it in a friend’s junk shop but then the old lady bought it in mistake and he had to try to get it back. Popoff goes to prison. Miss Dawson invites Robby to live with her in her house and Robby accepts with his pal’s approval. Muchflour is getting weary of the modern times and returns to sleep in a hollow oak from where he emerged in the beginning of the series. 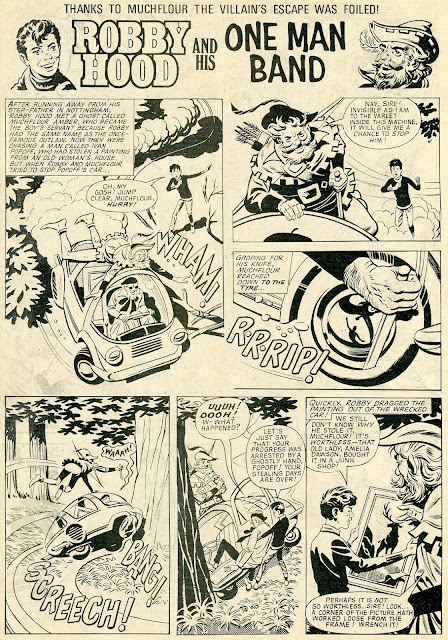 A LOOK AT COR!! STRIPS: ROBBY HOOD AND HIS ONE MAN BAND, PART ONE


Robby Hood and His One Man Band was yet another adventure serial in COR!! that occupied two pages of the paper and lasted from 7th November, 1970 until 24th April, 1971 (issue Nos. 23 – 47). The black and white feature was illustrated by Ron Turner. The script was by Scott Goodall who is said to have written all adventure tales in COR!!

Robby Hood lived with his step-father and step-brothers who were always making fun of his name and place of birth (Nottingham) until he finally decided to run away from home and vanish into the Sherwood Forest. There he met a weirdly-dressed bloke named Muchflour Amber, one–time miller from the parish of Mansfield who spoke in a peculiar way and was seeking a fellow by the name of Robin Hood. Robby realised that the bloke was a spectre from the Middle Ages on a quest to find the long-dead heroic outlaw and join his band of merry men. Saddened by the news that Robin Hood was no longer around, Muchflour offered to become Robby’s faithful servant. One peculiar thing about the ghost was that Robby was the only person who was able to see him (well, apart from the readers of COR!!) while all the other characters of the feature were completely unaware of his presence so Muchflour never failed to catch them off-guard. It was a great advantage because the characters who Robby Hood and his “one man band” had to deal with were usually dangerous criminals.

The series consisted of the opening episode in the issue cover dated 7th November, 1970 (No. 23) and four serialised adventures.

The first story ran from 14th November until 12th December, 1970 (issue Nos. 24 – 28).  The pair accidentally encounter two armed thugs who have kidnapped Miss Rushton, a millionaire’s daughter, and are holding her for a ransom of 20,000 pounds. Robby tries to free the girl but the bandits capture him as well and take both of their prisoners to their hiding place. Muchflour brings their treachery to an end with the aid of his ancient acorn of wisdom and a young stag whom he summons with a blow-horn. In the process of liberating Robby and the girl, Muchflour sets the crooks’ hideout on fire and grounds their helicopter. The girl reunites with her father and the kidnappers are arrested. Robby and Muchflour stay in the Sherwood Forest. 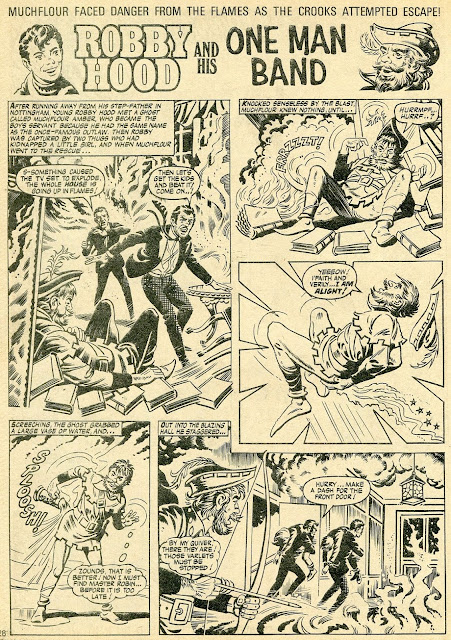 The second adventure span over the period from 19th December, 1970 until 6th February, 1971 (issue Nos. 29 – 36). Muchflour and Robby meet old Dan Spooner who has a smallholding on the edge of the forest. A construction company has bought Spooner’s land and wants him to leave. The evil foreman Herbie Bennett and his construction men try different dirty plots to drive the old man off his land and make him abandon his hut. Muchflour and Robby try to help the old-timer as much as they can but the construction men finally bulldoze the house. Spooner, Muchflour and Robby discover a maze of tunnels underneath the hut and meet a strange dwarf Bimbo who turns out to be the wicked foreman’s accomplice and lures Robby into a trap. Construction men capture Robby and carry him to their quarters where he finds out that the real reason why Bennett and his gang were so desperate to evict old Dan Spooner and demolish his house was the soil. It contains a high percentage of iron ore and the tunnels under the house were made by Bennett and his thugs prospecting. Evicting Spooner was a deliberate fraud because mining rights for the area would guarantee a fortune. The thugs dump Robby and Spooner in a hole and are going to bury them under tons of quick-setting cement but Muchflour pulls them out. They follow the crooks and make them confess by using the “noise torture” administered with Muchflour’s ancient super-loud blow-horn.  Herbie Bennett and his cronies are taken away by the police. Mr. Spooner offers Robby to stay with him, but the boy prefers the company of his invisible friend. 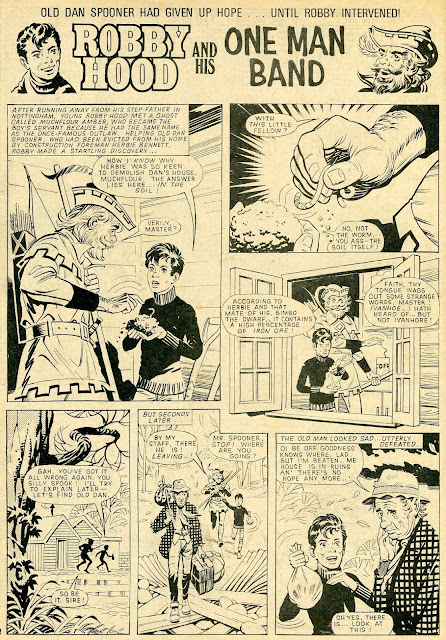 The remaining two stories will be covered in the second post on Robby Hood and His One Man Band.