A LOOK AT COR!! STRIPS: RAT-TRAP


Rat-Trap was a weird adventure strip and reader participation feature centered around the unappealing figure of a fiendish criminal mastermind – Doctor Rat. Announcements of a new feature came in the form of teasers in COR!! issues dated 15th July, 1972 (No. 111) and 22nd July, 1972 (No. 112) - a single panel in the POSTBAG section in the former and a half-pager in the latter: 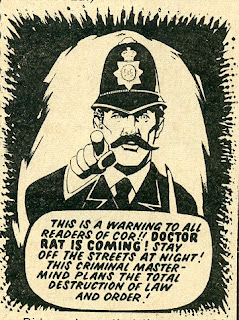 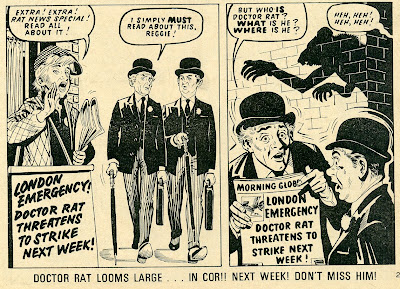 Dr. Rat made his first appearance in the issue of 29th July, 1972 (No. 113), announcing it was time to strike and make the forces of law and order tremble at the very sound of his name. The sinister rat-like figure emerges from his hidey-hole and presents the readers with a calling card – a rodent with a stethoscope round its neck. A police officer instantly recognises him as Doctor Rat, about to become known as King of Crime. Without any delay he is off to his first robbery and the Bank of England is the target. Putting on a show of his super-natural powers, Dr. Rat robs the bank and escapes from the police. No one will ever catch the World’s Master Criminal - laughs the villain as he runs along the sewers of London… - and rats to all you, readers of COR!! With a rodent raspberry thrown in for bad luck! RAAAASSSP! 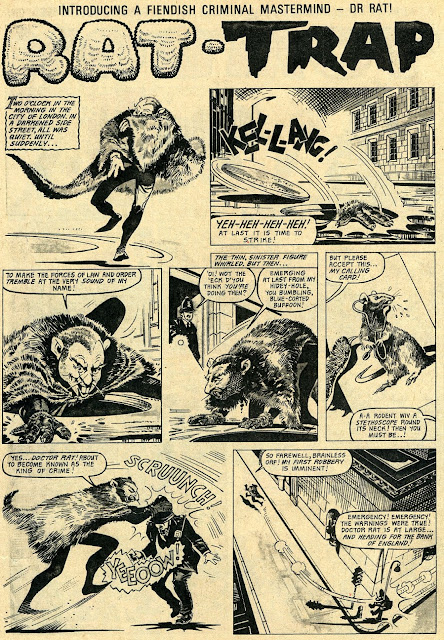 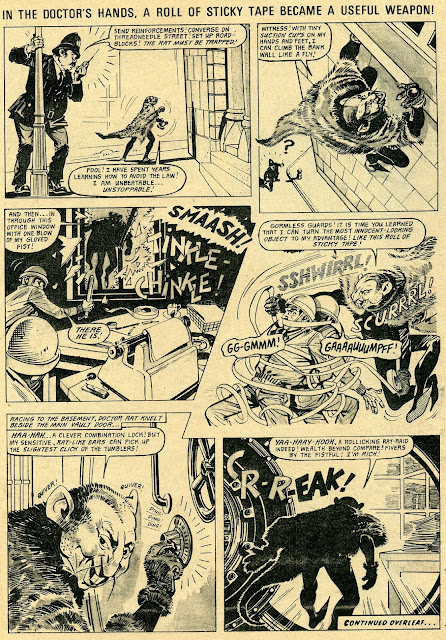 In the following issue we see the Government meet at Downing Street; the ministers decide that as the police have already failed, it is obviously a job for the Army. Task force under the command of Major General Flushem-Out will attack Rat’s hideout in the sewers. But law and order are in for another humiliating defeat, ending with a RAAAASSSP!

The police and the army have failed, so a week later the government calls in the men from BIFFF – British Institute for Foiling Felonies consisting of six secret agents. They decide they need only one thing – a rat trap. The men of BIFFF make their first attempt to trap Dr. Rat while he is robbing an art gallery but Dr. Rat foils the plan and challenges the agents by giving them a present – a list of his future crimes. Law and order realize they are powerless to stop the villain and the Chief of BIFFF makes an appeal to every reader of COR!! throughout the World in the issue dated 15th August, 1972 (No. 115): 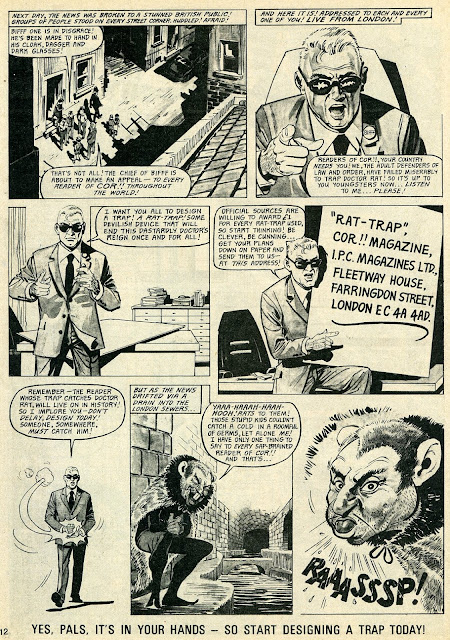 Dr. Rat provokes COR!! readers by ridiculing and scorning at them. The script writer’s intention was probably to irritate the readers and make them want to contribute their best effort toward bringing the King of Crime down. And contribute they did by suggesting all sorts of ingenious traps designed to catch the criminal mastermind wanted for burglary and rudeness. A prize of £1 was offered to the reader whose design was used. Every week BIFFF agents announced the name of the reader whose plan was to be put into action, but their combined efforts produced no result and Dr. Rat remained at large. 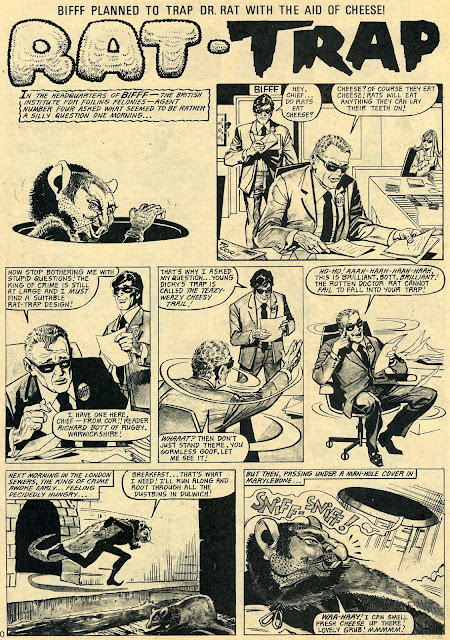 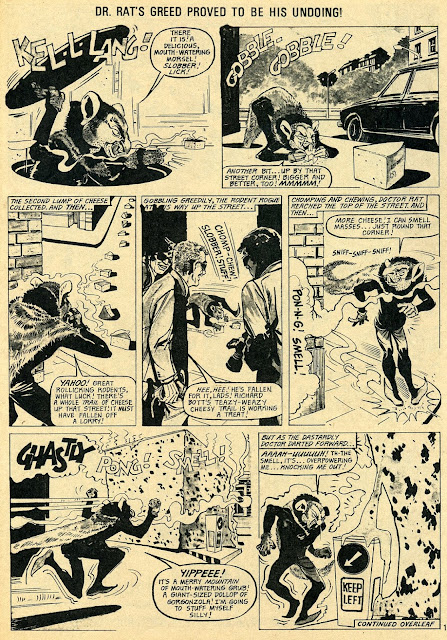 Dr. Rat must have been popular with the readers because COR!! issue dated 6th October, 1973 (No. 175) came with a free gift RATTY RAASSPER that was of course a tie in with the feature. The gift was a cardboard sleeve with a rubber band and a metal hoop inside that made a rasping sound as it spun around inside the envelope; besides, the design of the sleeve was such that Dr. Rat would also thrust his tongue out to accompany the rasping sound. Here is what it looked like (sadly, the insides are no longer present): 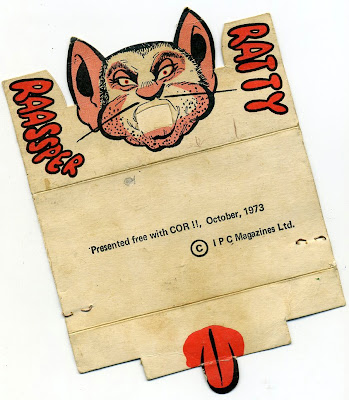 A week later the free gift was used as part of another failed plan to trap the King of Crime: 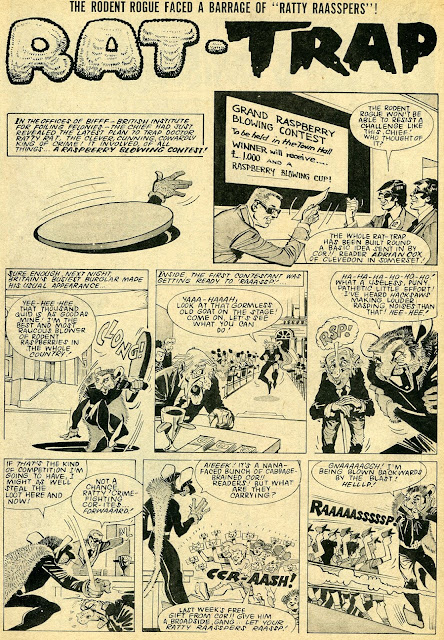 In the issue dated 8th June, 1974 (No. 210) BIFFF agents announced that the rodent might be caught next week and that’s final! And trapped he got, but not thanks to an idea offered by a reader: 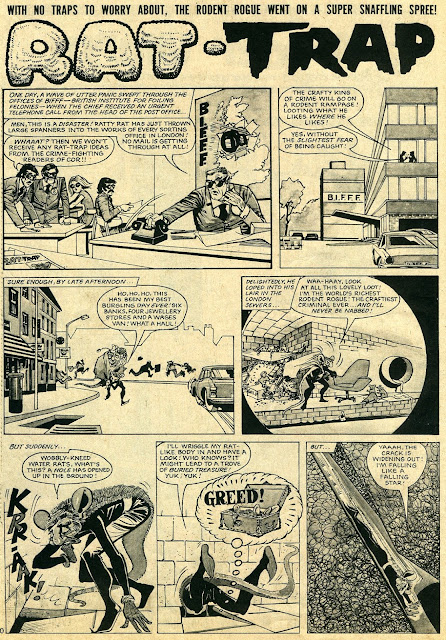