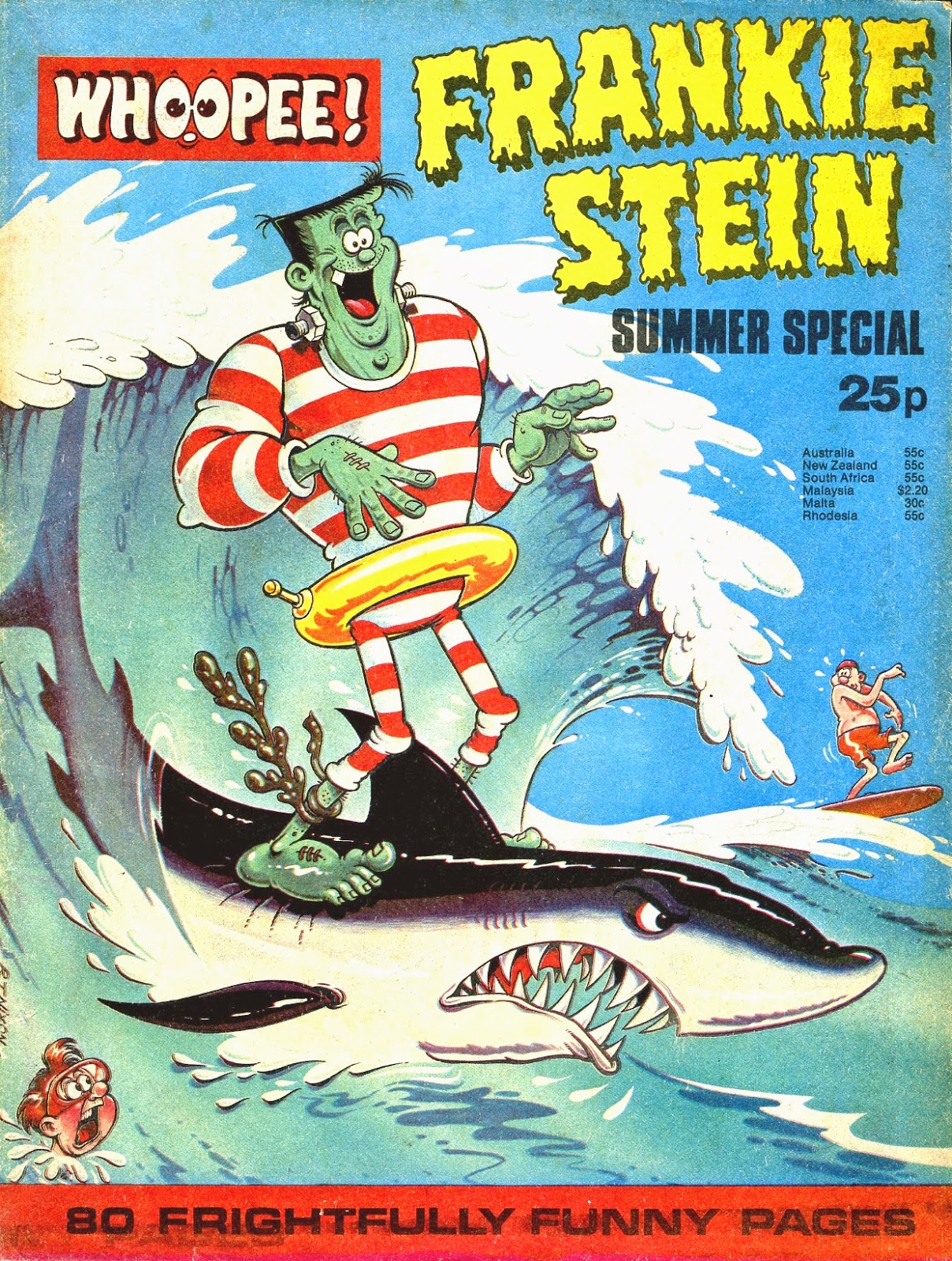 The first Frankie Stein Summer Special came out in the summer of 1975, it was 80 pages thick and cost 25 p. As could be expected, Frankie Stein was the star of the magazine and featured on both covers, 36 inside pages and the pull-out colour poster – that’s 40 pages, or exactly one half of the paper. Less than three quarters of the Frankie Stein stuff was new material while the rest was reprints. There were 9 pages of old school Frankie Stein drawn by Ken Reid for WHAM! issues 71, 79, 155 and 61. As was the custom at IPC, Mr. Reid’s original one-pagers were cut up and rearranged to spread over two or even three pages with resized and often heavily doctored frames and weird alterations of text. Interestingly, they didn’t bother to white Micky out. Here are some examples of original frames in WHAM! and the matching 'enhanced’ ones in this Frankie Stein Summer Special side-by-side:

The scene by Bob Nixon used on the bright pull-out poster of Frankie diving in the sea was originally drawn for the cover of SHIVER AND SHAKE dated 27th April, 1974 (No. 60): 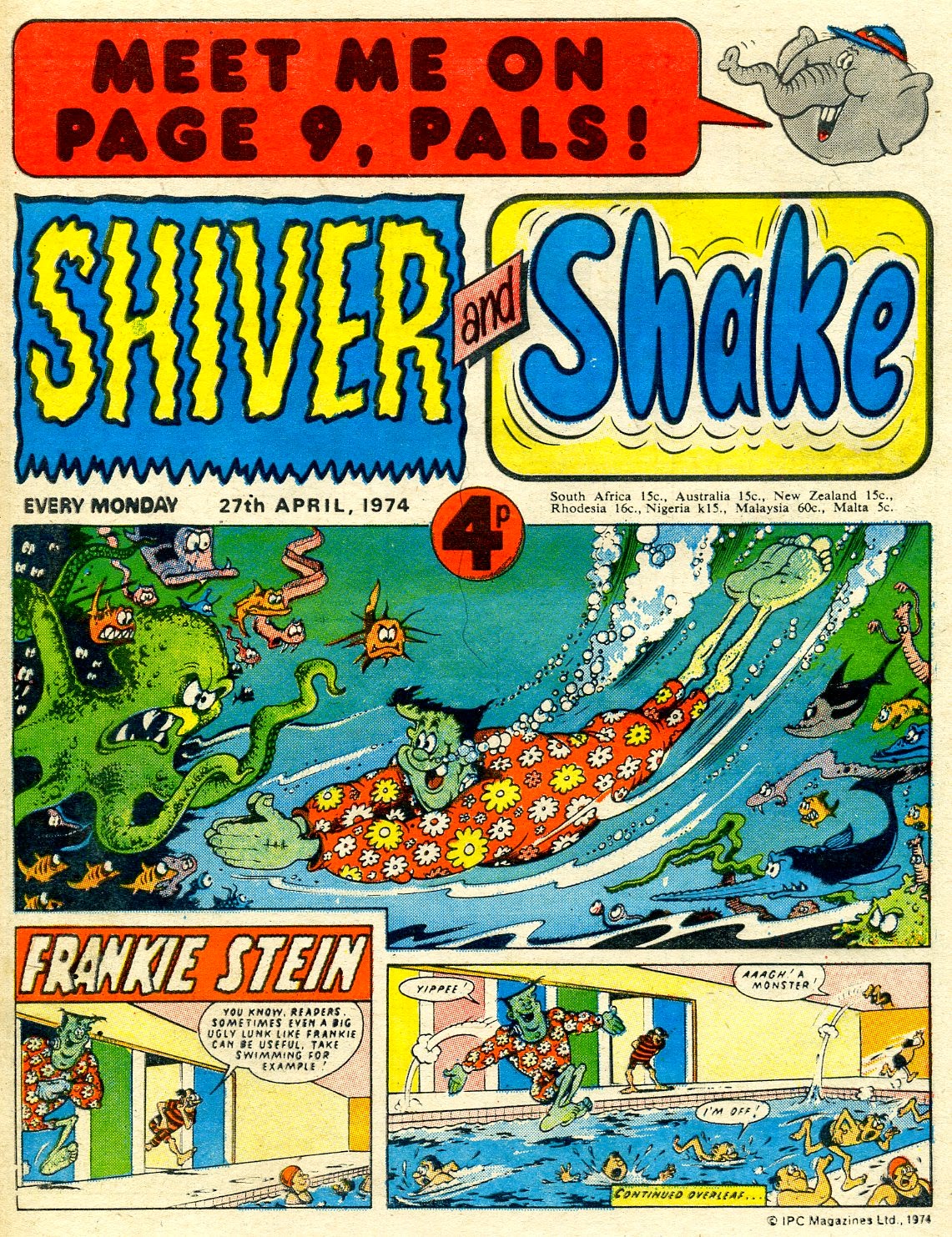 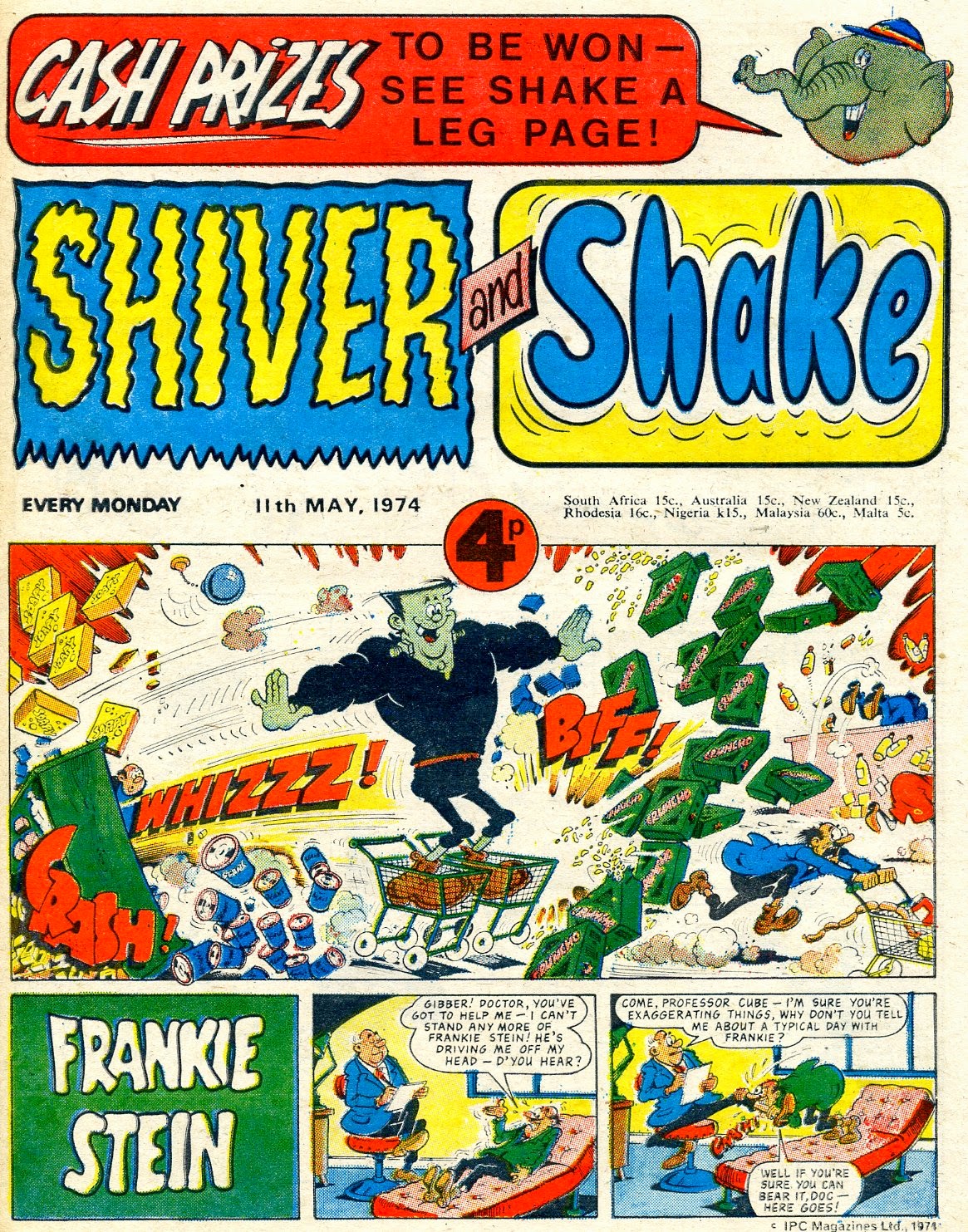 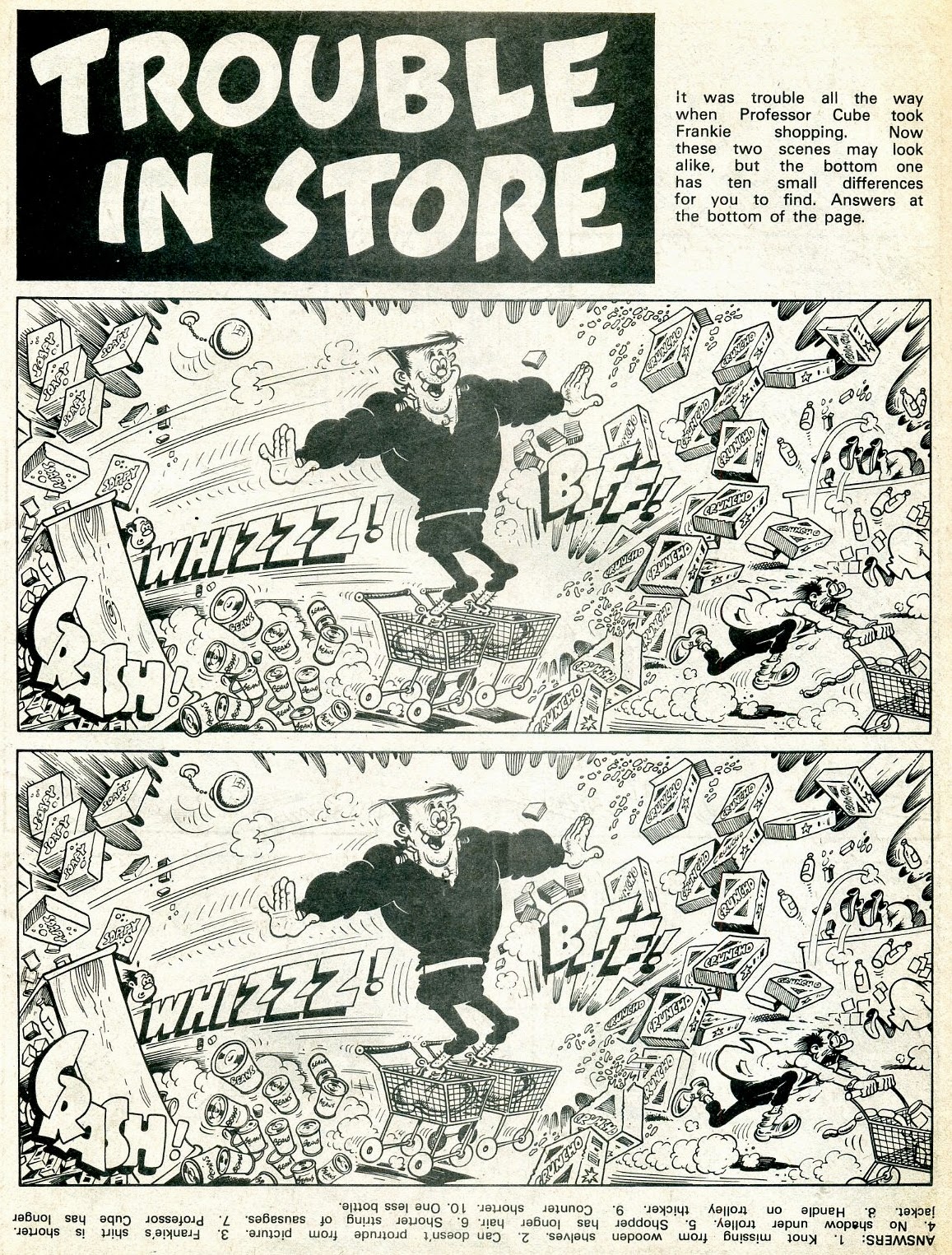 Let’s leave reprints alone for a while (more will be mentioned later) and look at the new material included in this first Frankie Stein Summer Special.

Robert Nixon was the biggest contributor. He drew two Frankie Stein stories – a 4-pager and a 5-pager. In the first one Prof. Cube and Frankie go on holidays and Prof. Cube makes two unsophisticated and predictably unsuccessful attempts to rid himself of ‘the big lunk’ – first by encouraging Frankie to surf on a dangerous rocky beach and then by plotting to use him as shark bait. Here is a frame from the story which is a simpler version of the lavish front cover artwork: 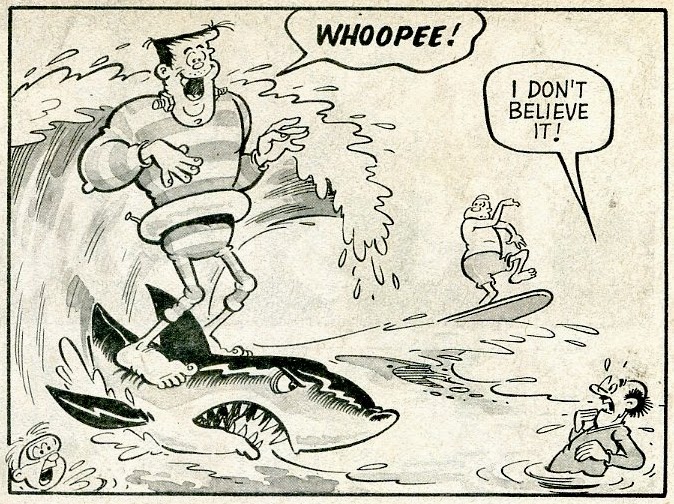 The story is also interesting because in it Mr. Nixon used the-evil-conscience-vs-the-good-conscience technique which Ken Reid exploited so well in his Dare-A-Day Davy strips in POW! in the late 60s.

In the second Frankie Stein story Prof. Cube tries to get rid of Frankie by sending him off to an army summer camp which looks a lot like a Konzentrationslager but ends up at the receiving end of discipline: 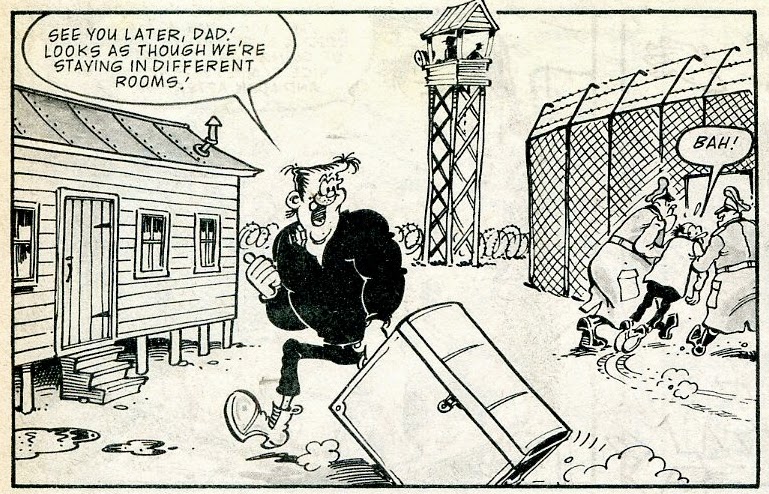 Frank McDiarmid’s contribution was a nice six-page story of Prof. Cube and his Ancestors which I showed in its entirety not so long ago, you can view it HERE. I have included it into the page count of Frankie Stein strips because the friendly monster features in the strip opposite Dad.

Jim Crocker illustrated a simple one-page Frankie Stein story on the back page:

Five sets of the feature called Frankie’s Travels drawn by Sid Burgon were a nice addition to the package. They were Frankie’s postcards sent from different tourist spots around the Globe. Here is an example: 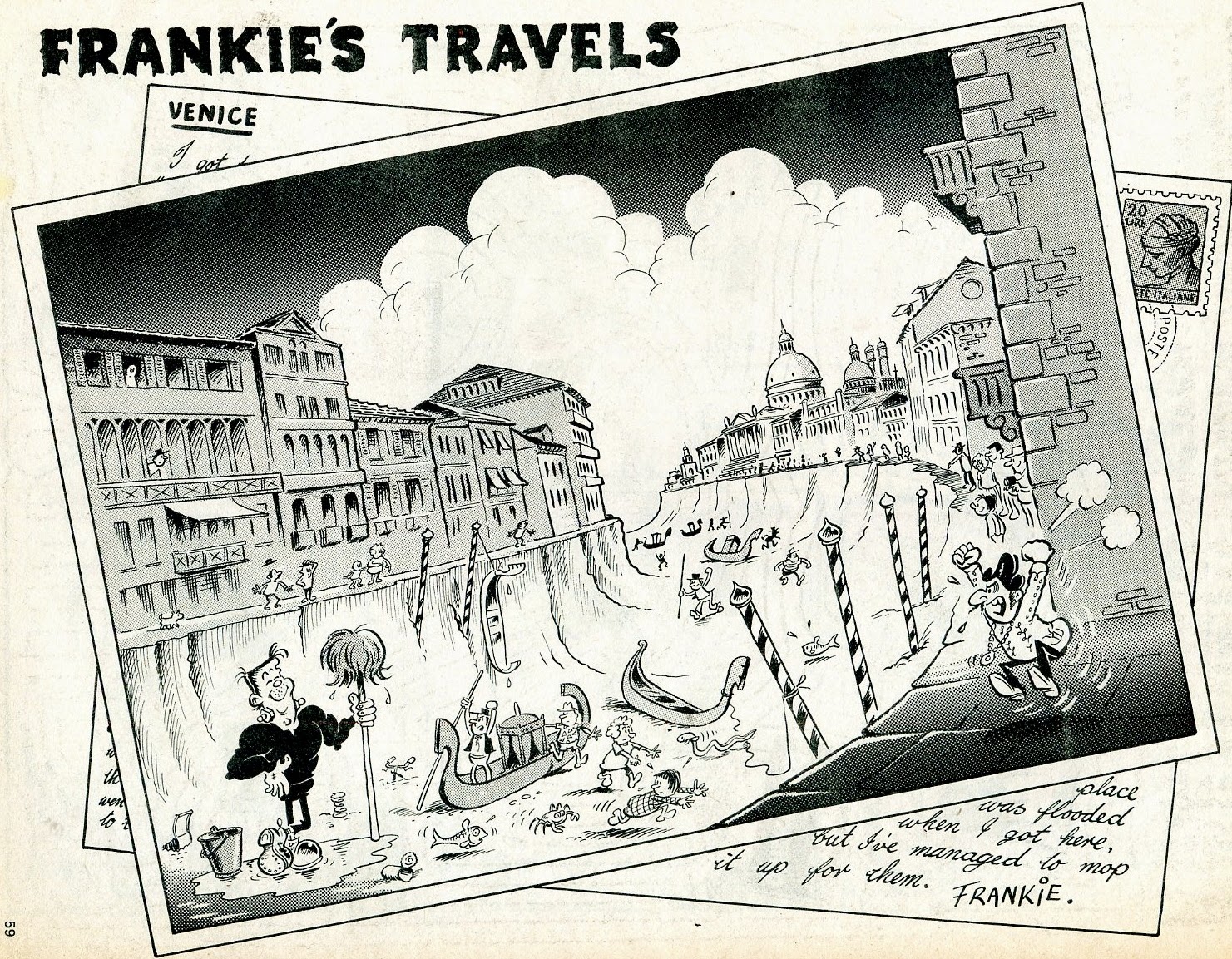 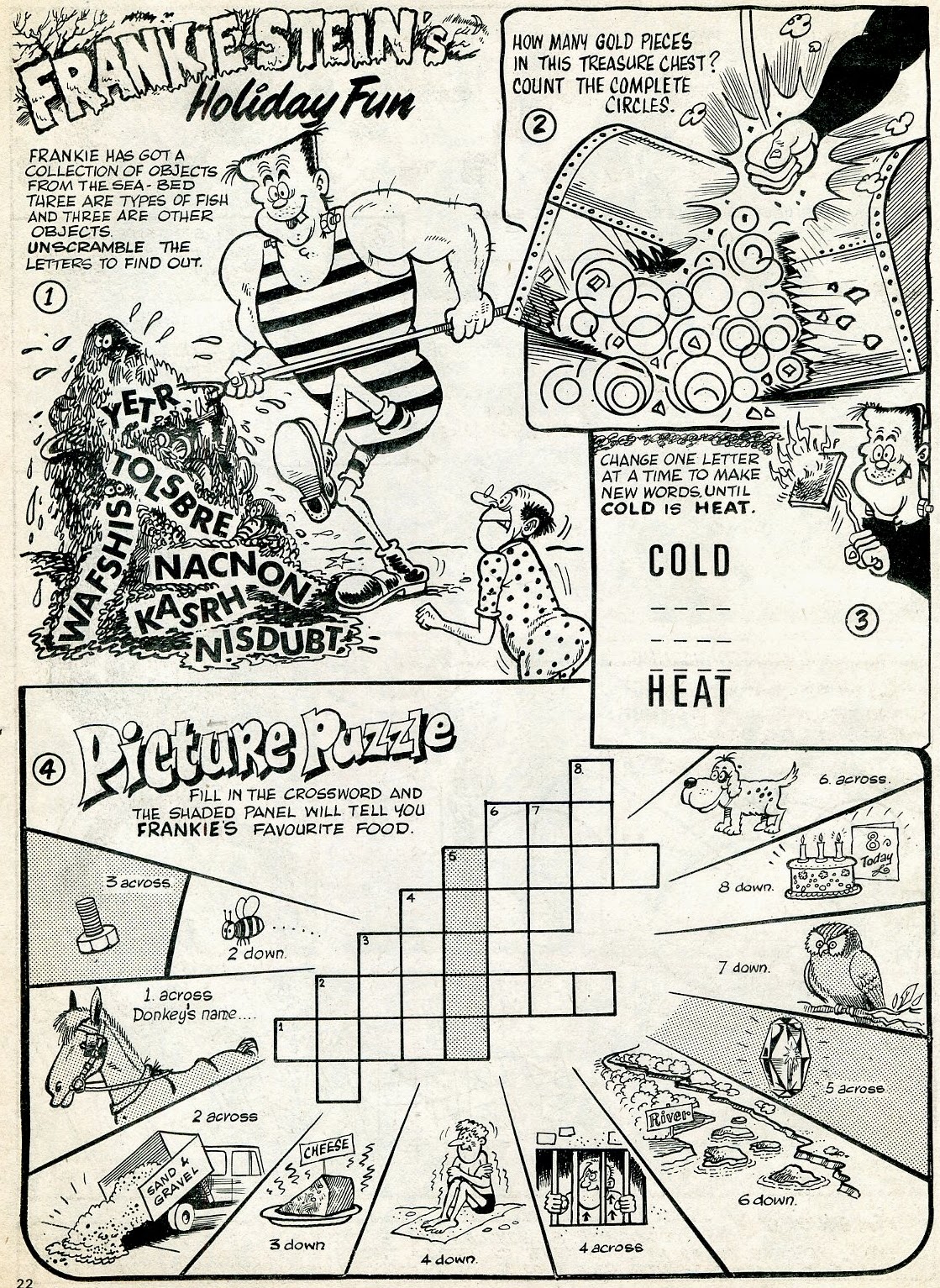 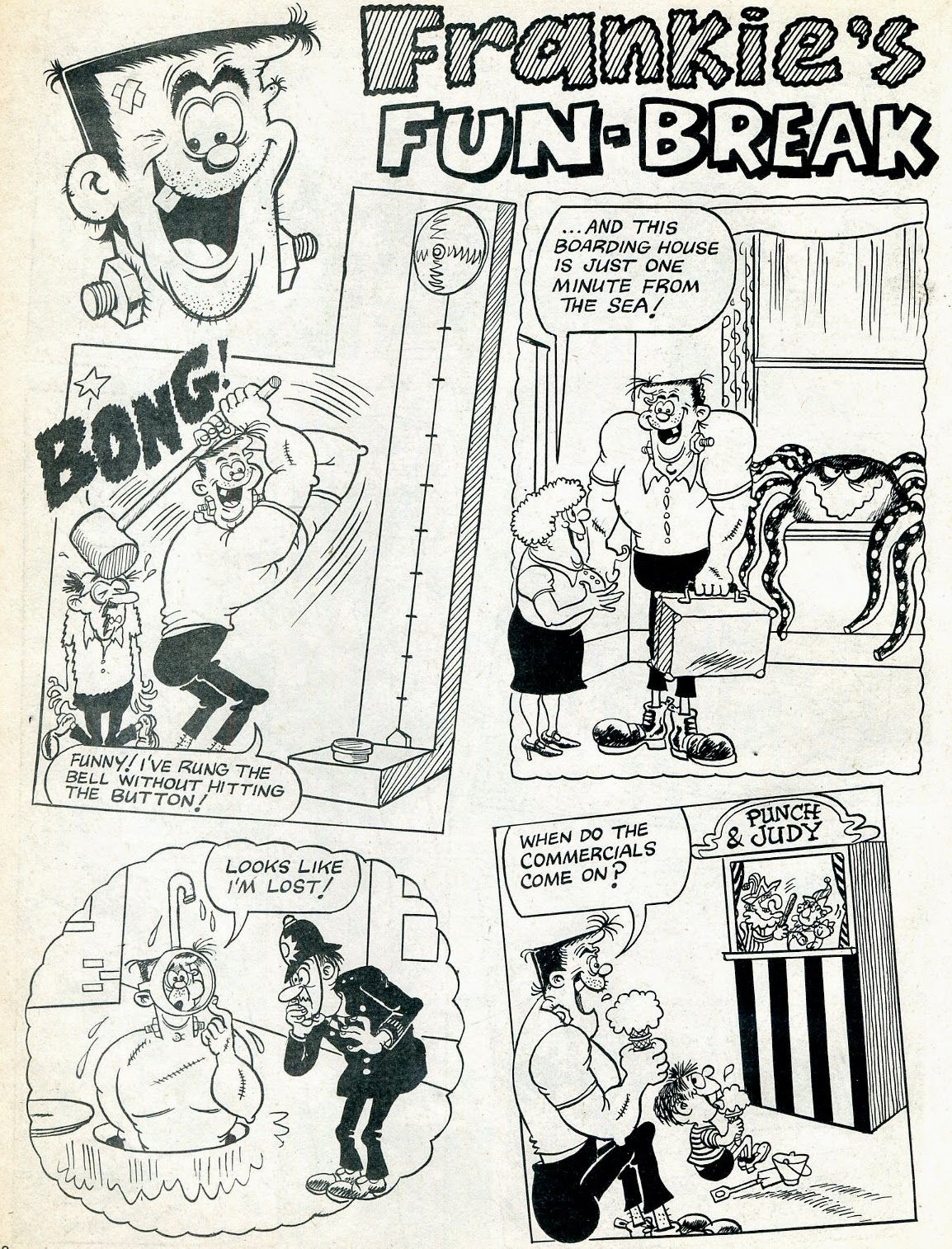 The other half of this Frankie Stein Summer Special was filled with reprints of non-Frankie Stein material. There are 24 pages of Mervyn’s Monsters – a strip which enjoyed a relatively brief run in BUSTER in 1968 and was illustrated by Leo Baxendale. Mervyn was a loopy lad who controlled a bunch of squelchy thingies known as the super spies of M.U.M. – Mervyn’s Undercover Monsters, and reported to Major Rhode at London H.Q. Their enemy was Mush – chief of the hostile organization known as C.R.U.S.H. (no explanation of what the abbreviation stood for was offered) and his cronies such as the potty professor Pottz and Abdul the Mighty. Both sides had an endless arsenal of electronic spying devices, disguised weapons and all kinds of crazy super-modern secret agent gadgets.

The Haunts of Headless Harry and Ghost Ship were borrowed from the SMASH! of the early 70s. They were represented in the Summer Special with 4 one-pagers each, some were coloured in. I am not sure who the artists were: 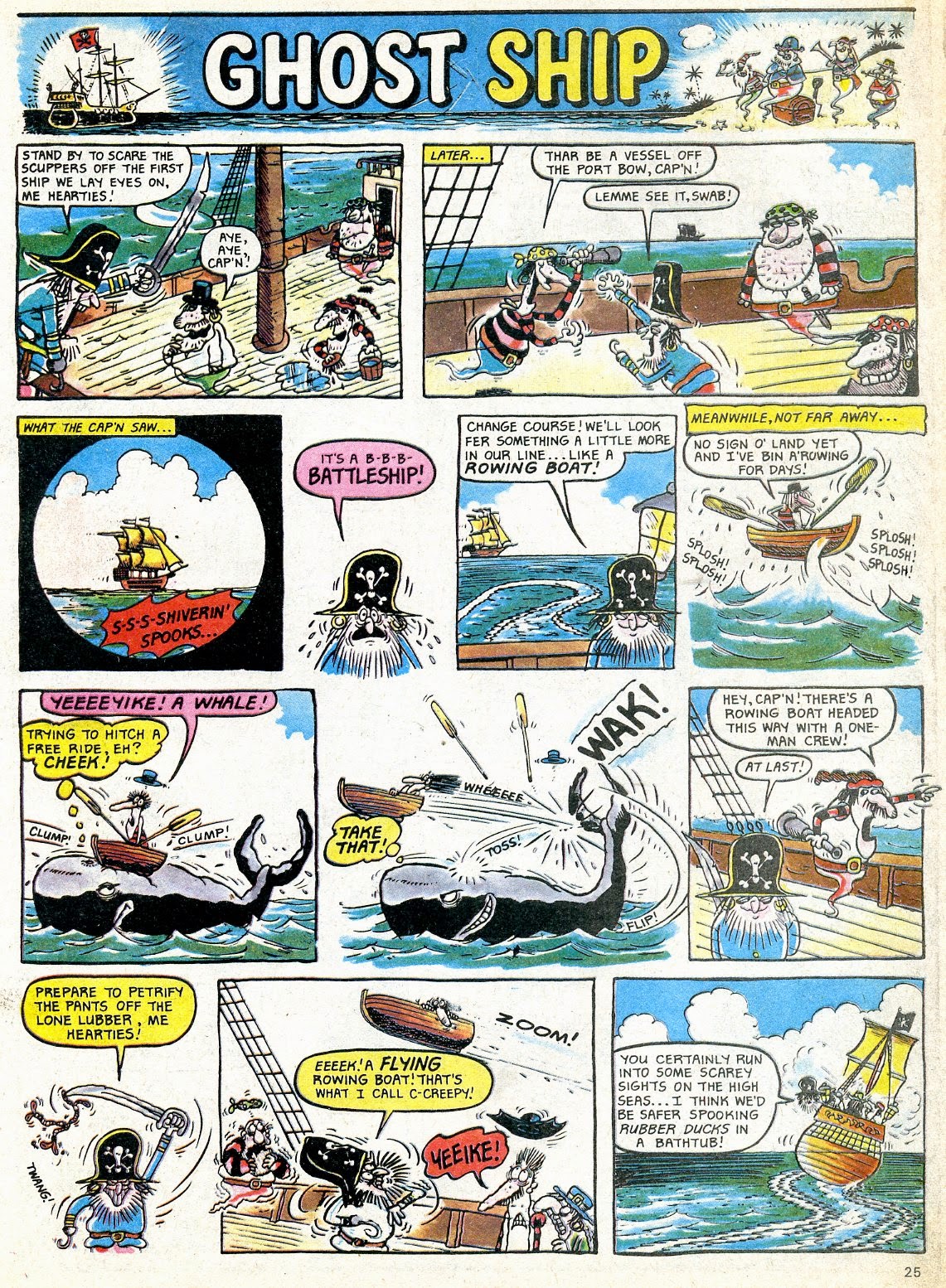 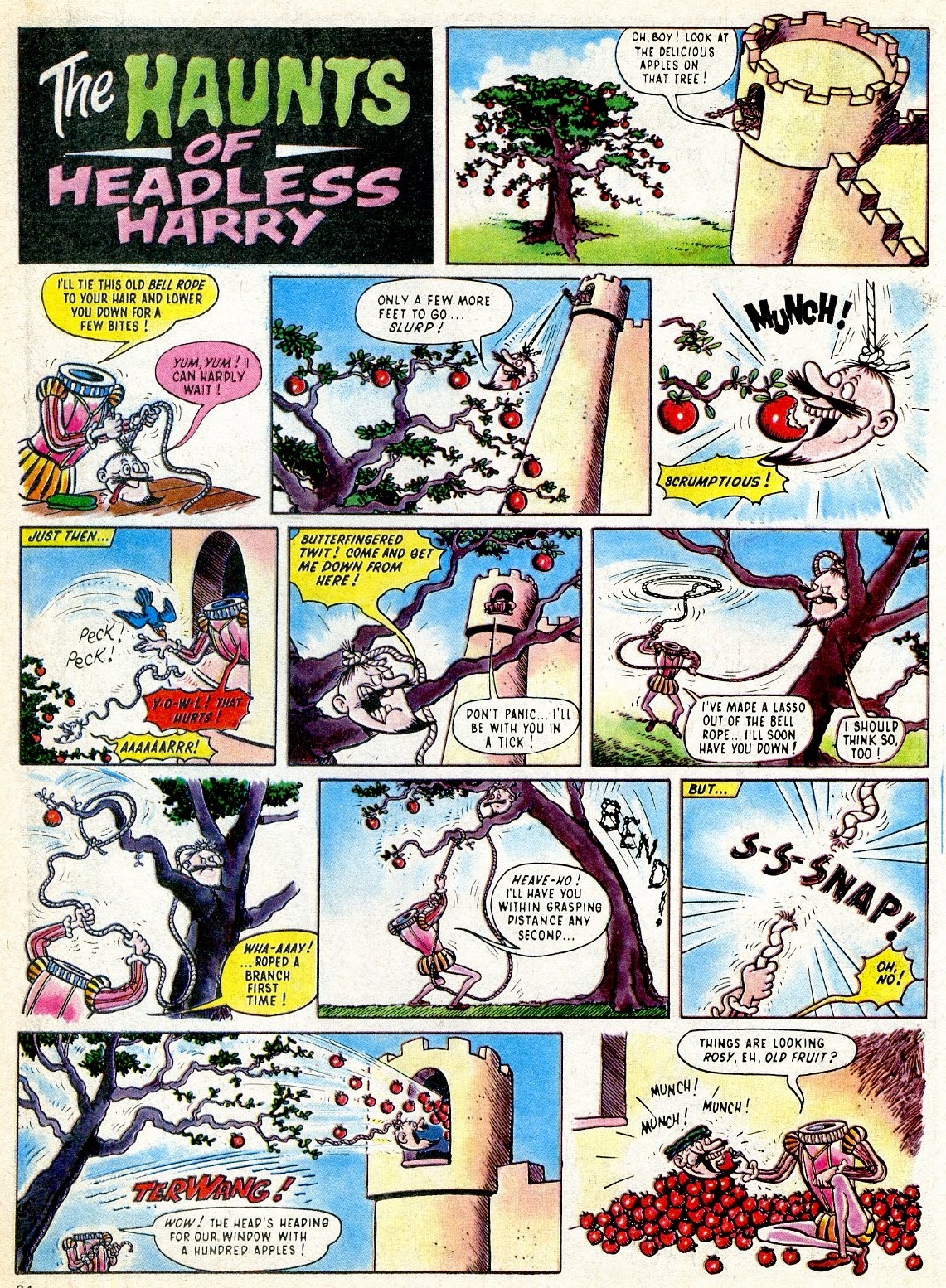 In the mid-70s the holiday specials of IPC children’s comics still had adventure serials in them. In the first edition of Frankie Stein Summer Special it was 8 pages of Crabbe's Crusaders drawn by Carlos Cruz. The original run of the strip appeared in BUSTER where it started in January 1969 and continued for more than a year. The story was about four orphaned lads who were shipwrecked on an island and met Professor Pankhurst Crabbe, the nuclear scientist who had escaped 'the war-mongering fools of the world' and set up the Headquarters for the Furtherance of Peace on the island.  Professor Crabbe has means to watch every trouble spot on Earth and the four youths become his crusaders for peace with the mission to combat this strife… In the story which is reprinted in the first FRANKIE STEIN HOLIDAY SPECIAL Crabbe’s Crusaders go on their first assignment and help the people of the Pacific island of Cortago overthrow a cruel dictator.

All in all, the Special was on the heavy side of reprints – a bit unusual for a first edition. I have counted 53 pages of reprints and only 27 pages of new material!
Posted by Irmantas at 6:56 AM