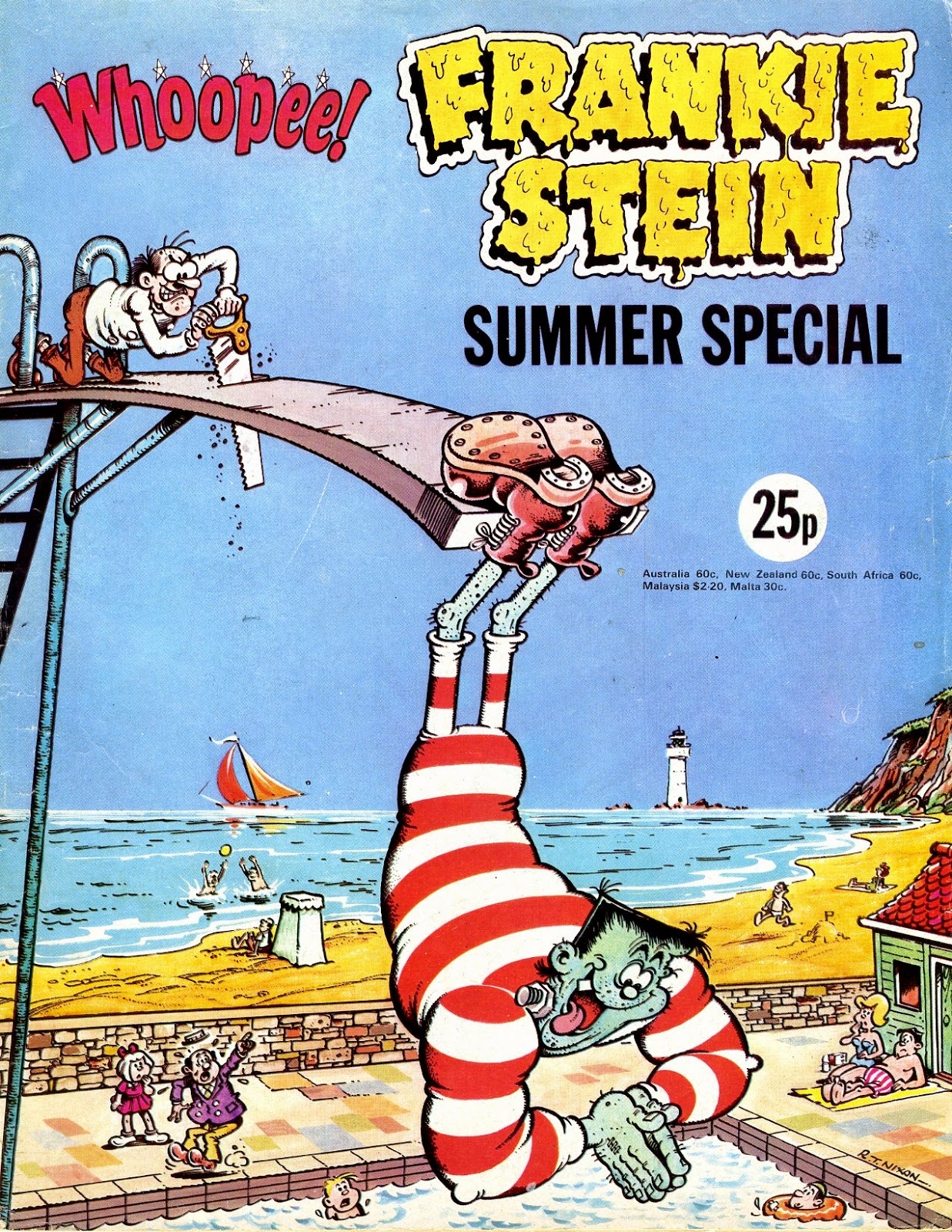 WHOOPEE! FRANKIE STEIN SUMMER SPECIAL 1976 was 64 pages thick and cost 25 p. Unusually for the times, it was printed on fancy glossy paper. Unlike in both previous Frankie Stein publications, the page count of Frankie Stein-related content outweighed other features by a good margin: there were 46 pages of the former and only 18 pages of the latter. What’s also good is that as many as 44 pages of the Summer Special was new material.

Frankie Stein Around the World was the central story of the magazine. Split into 5 parts, it was 24-pages long – the first 14 were by Frank McDiarmid, followed by 1o from the hand of Brian Walker. Mr. McDiarmid had already drawn a few Frankie Stein sets in SHIVER AND SHAKE weeklies whereas for Brian Walker it must have been the first Frankie Stein job (his first one in WHOOPEE! weeklies didn’t come out until the issue cover-dated October 9, 1976). 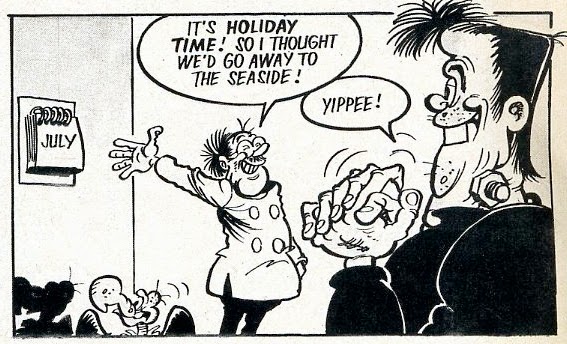 It’s holiday time so Prof. Cube takes Frankie to the seaside where he risks facing charges for two counts of attempted murder, first by pushing Frankie off the cliffs, then by cutting the line as they do water-skiing. 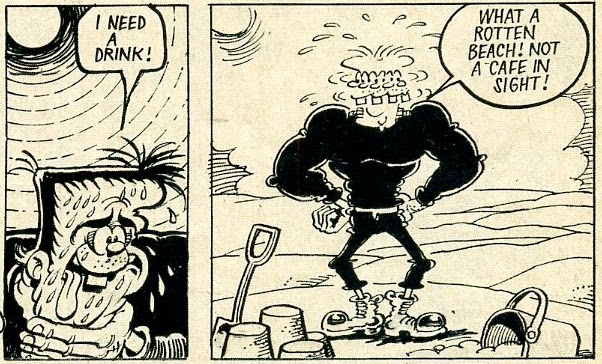 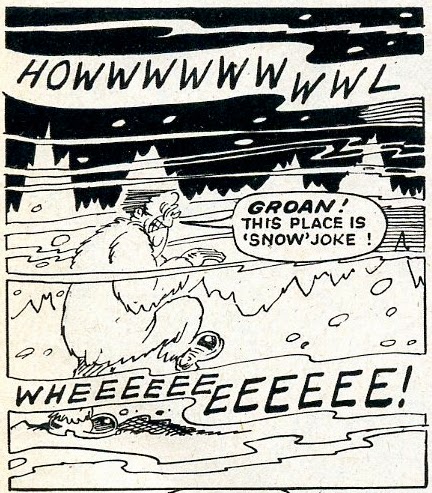 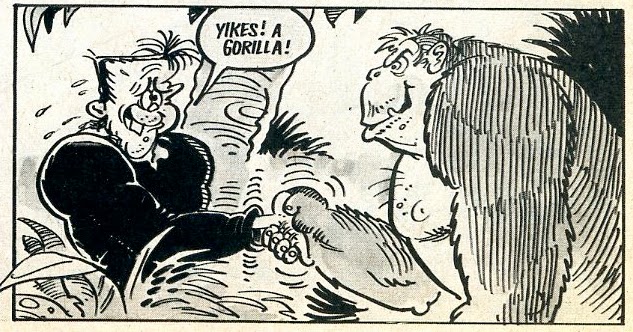 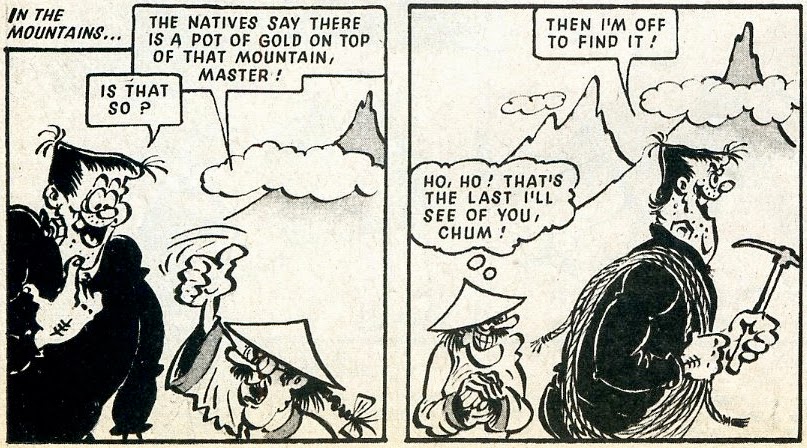 ...and finally the lost world in South America:

Just as Prof. Cube thought he was free at last, a famous explorer spotted Frankie wandering in the wild and brought him back to England, believing he was the missing link: 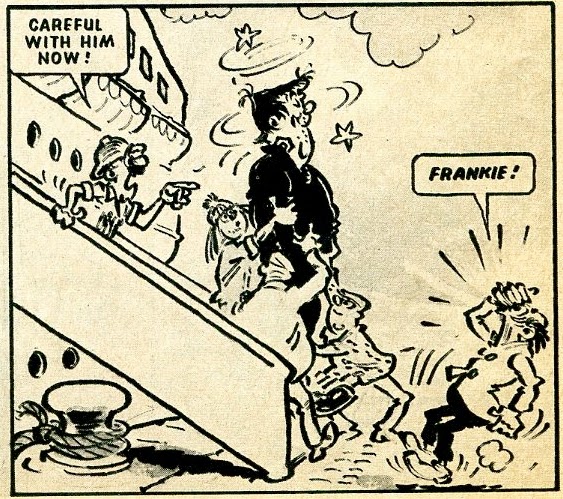 It was back to the drawing board for Dad, so he took Frankie to the swimming pool and this was nearly the end for Frankie Stein but angry readers forced Prof. Cube to bring their favourite character back to life. 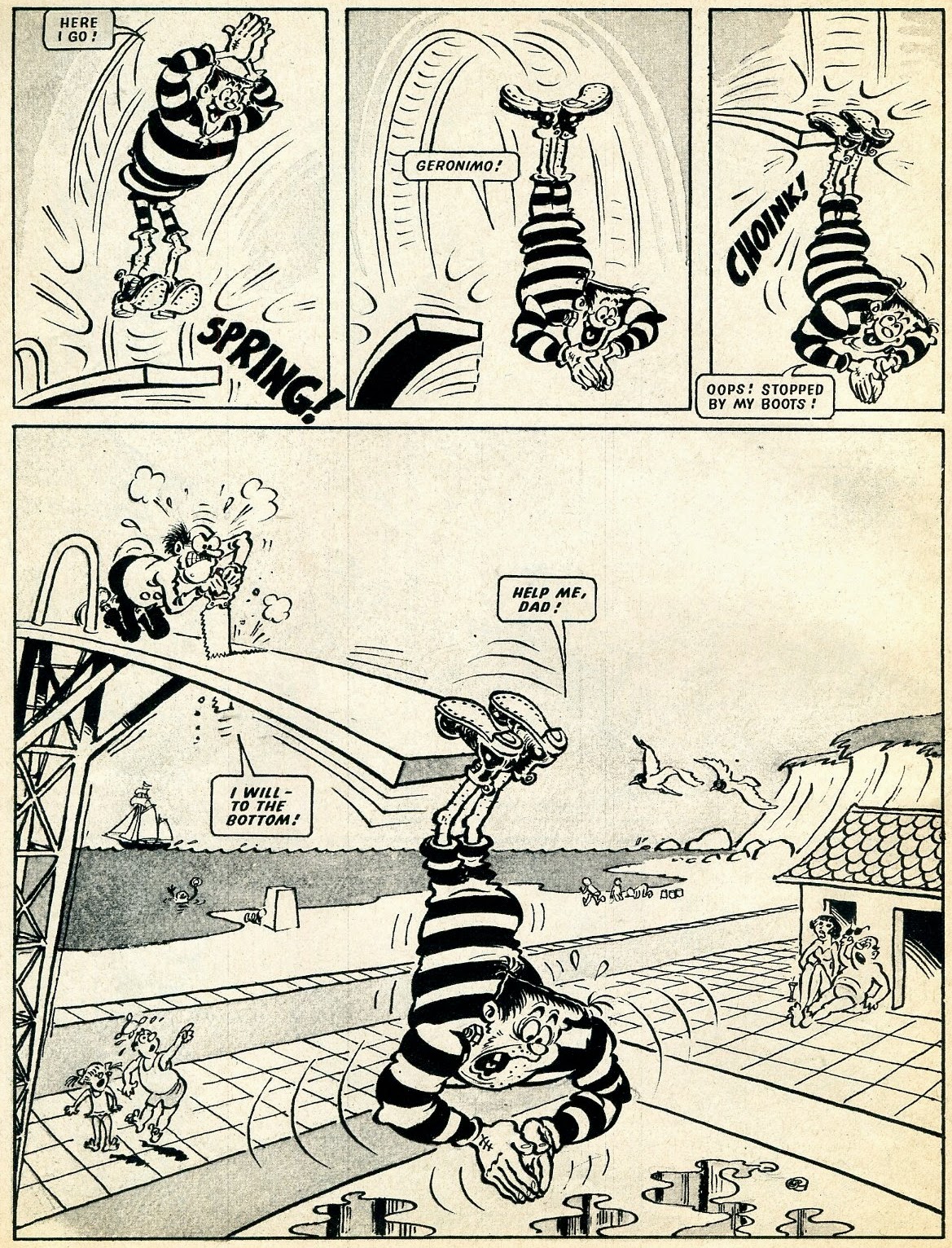 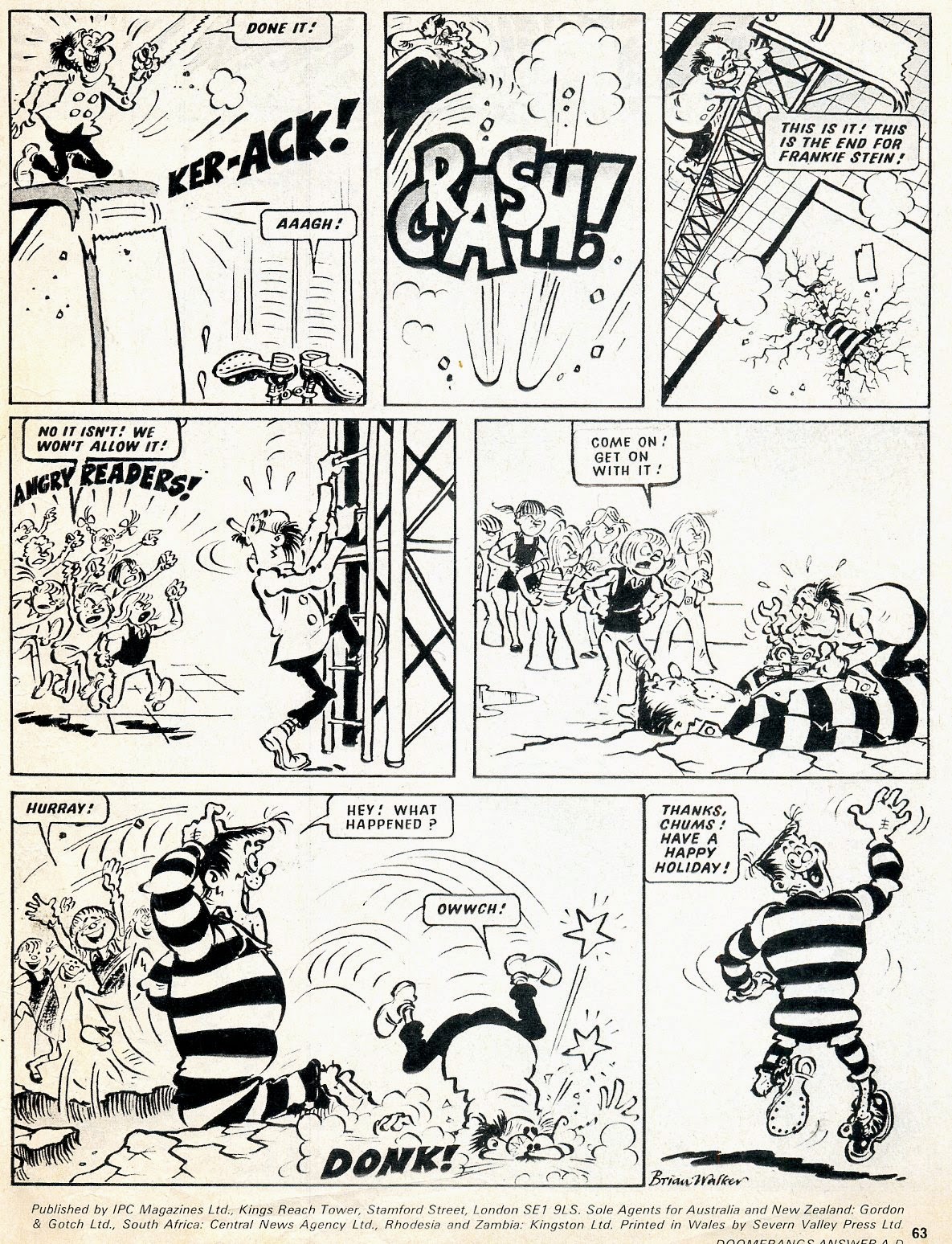 8 pages of Frankie Stein by Ken Reid were reprints from WHAM! issues 38, 58, 33, 49, 40, 122, 36, 158 (listed here in the order of their appearance in the Summer Special). This time common sense prevailed and they kept alterations of the originals to the minimum, such as increasing the height of two rows of panels on pages without the masthead – they had to do something to fill the page. Only two episodes were affected whereas on the remaining six the new masthead was the only change, save for the odd word whited-out here and there for no reason at all. The episode from WHAM! No. 158 was coloured-in, check out the result: 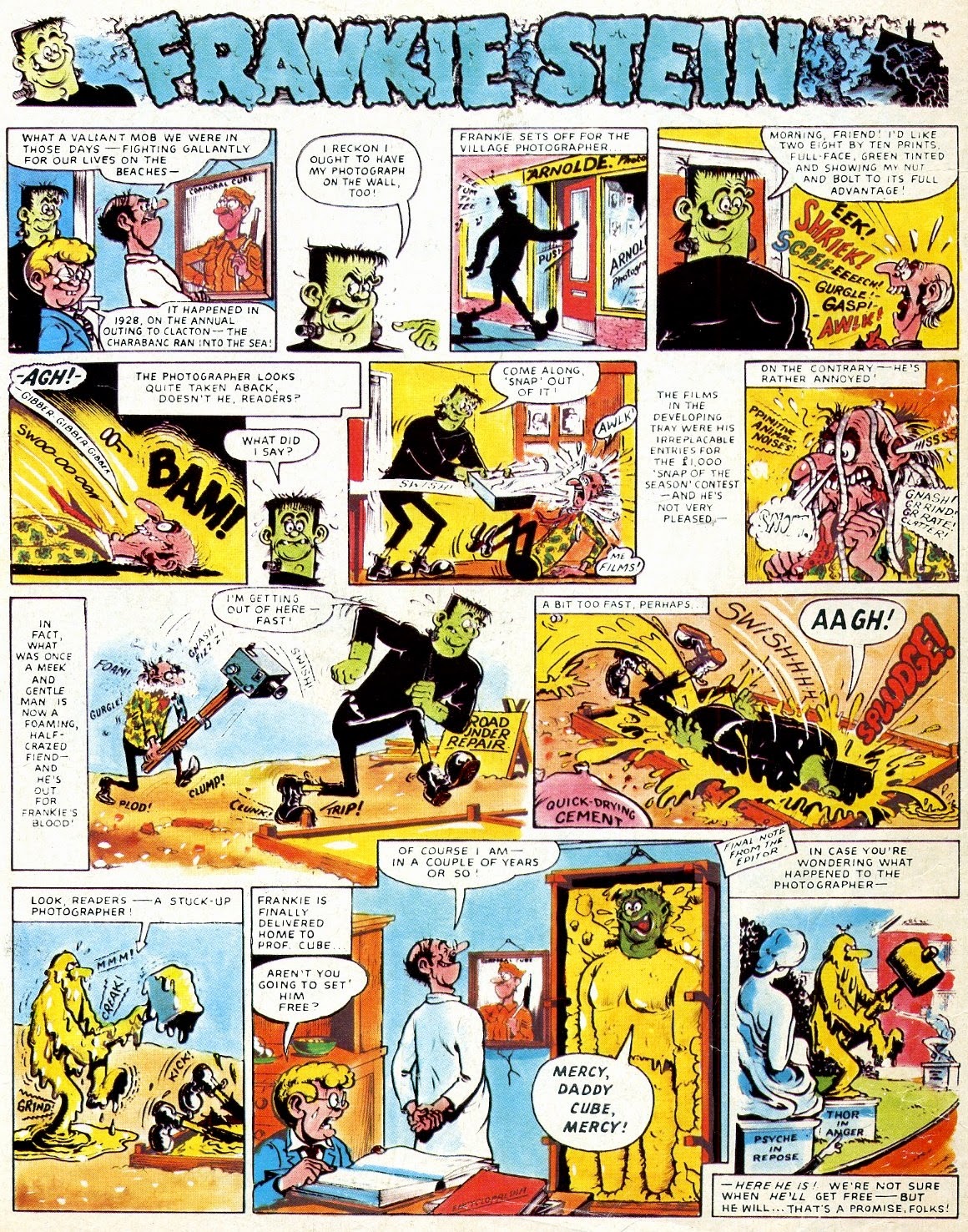 They also re-used some of Mr. Reid’s more recent artwork: in Doomerangs spot-the difference puzzle they borrowed something from the World-Wide Werdies pin-up that can be found in the 19th October, 1974 issue of Whoopee! and Shiver and Shake: 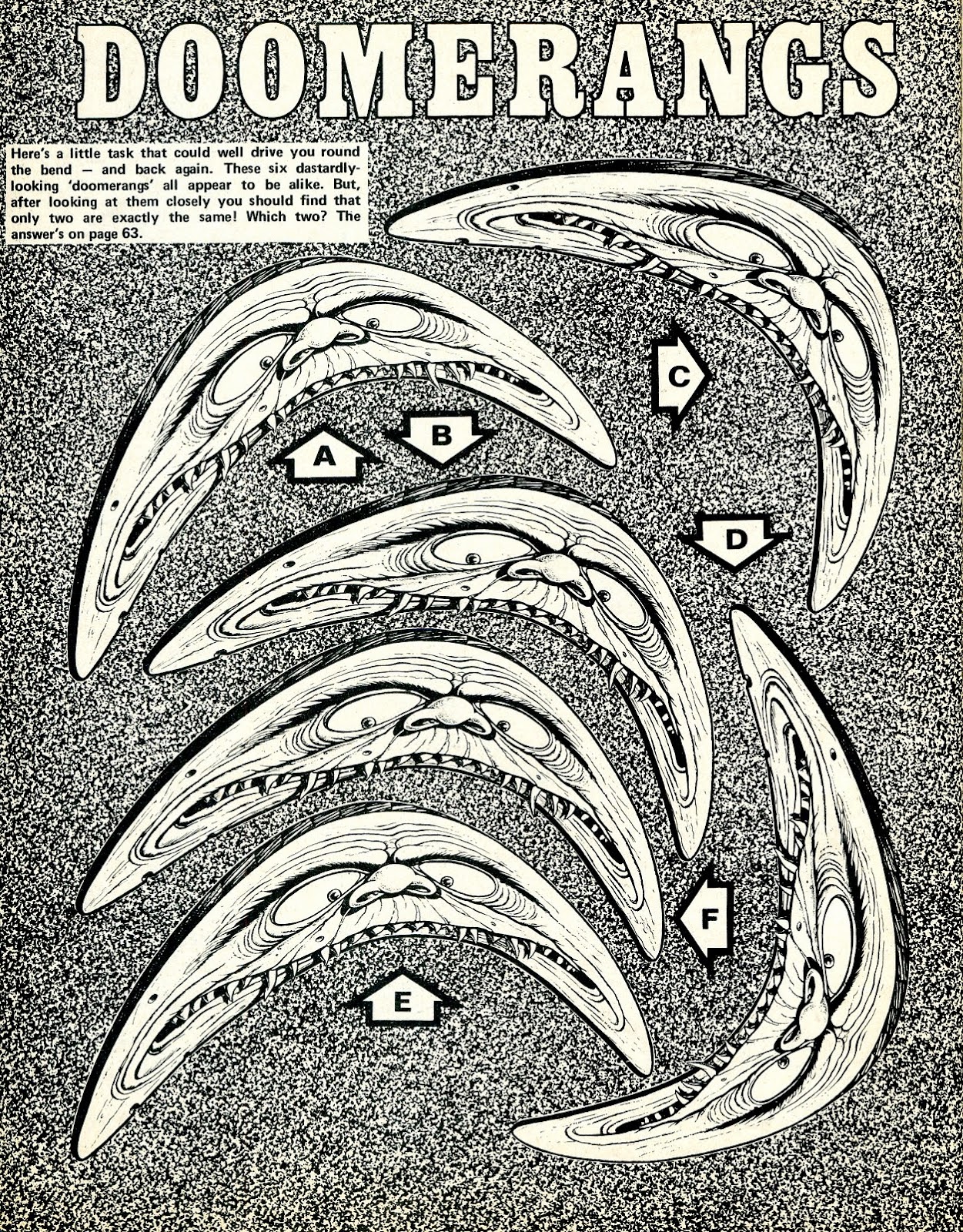 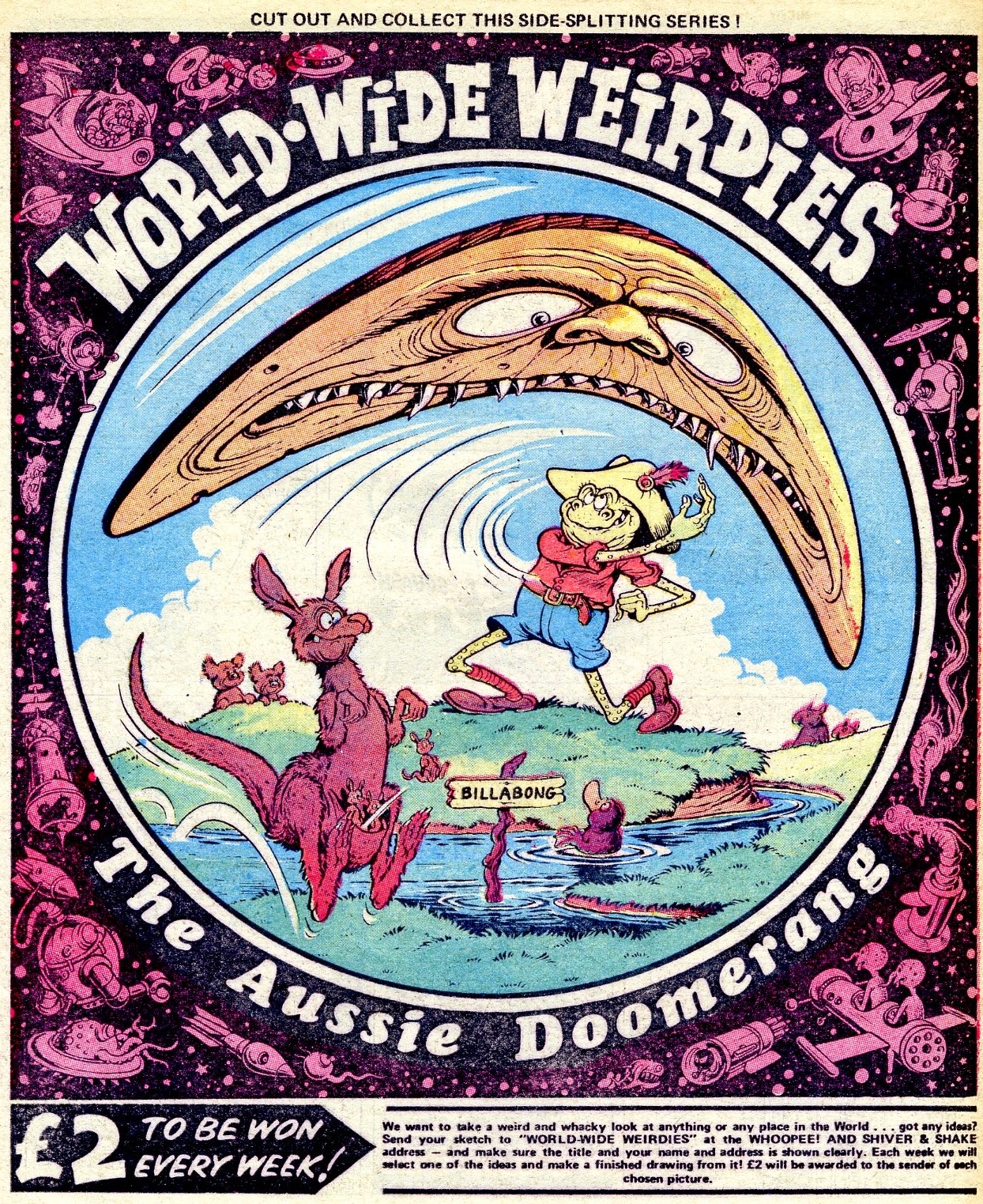 The other two spot-the-difference puzzles also re-used drawings from older comics: in Double Trouble it was a panel by Bob Nixon from the weekly episode of Frankie Stein in Shiver and Shake No. 68 (June 22nd, 1974), and in Double Shocker – a panel by Brian Walker from the conger eel episode of Scream Inn in SHIVER AND SHAKE No. 65 (June 1st, 1974). The SUMMER SPECIAL also had two double-pagers of Frankie Stein puzzles, all new material drawn by I don’t know who, possibly Jim Crocker. Here is a sample: 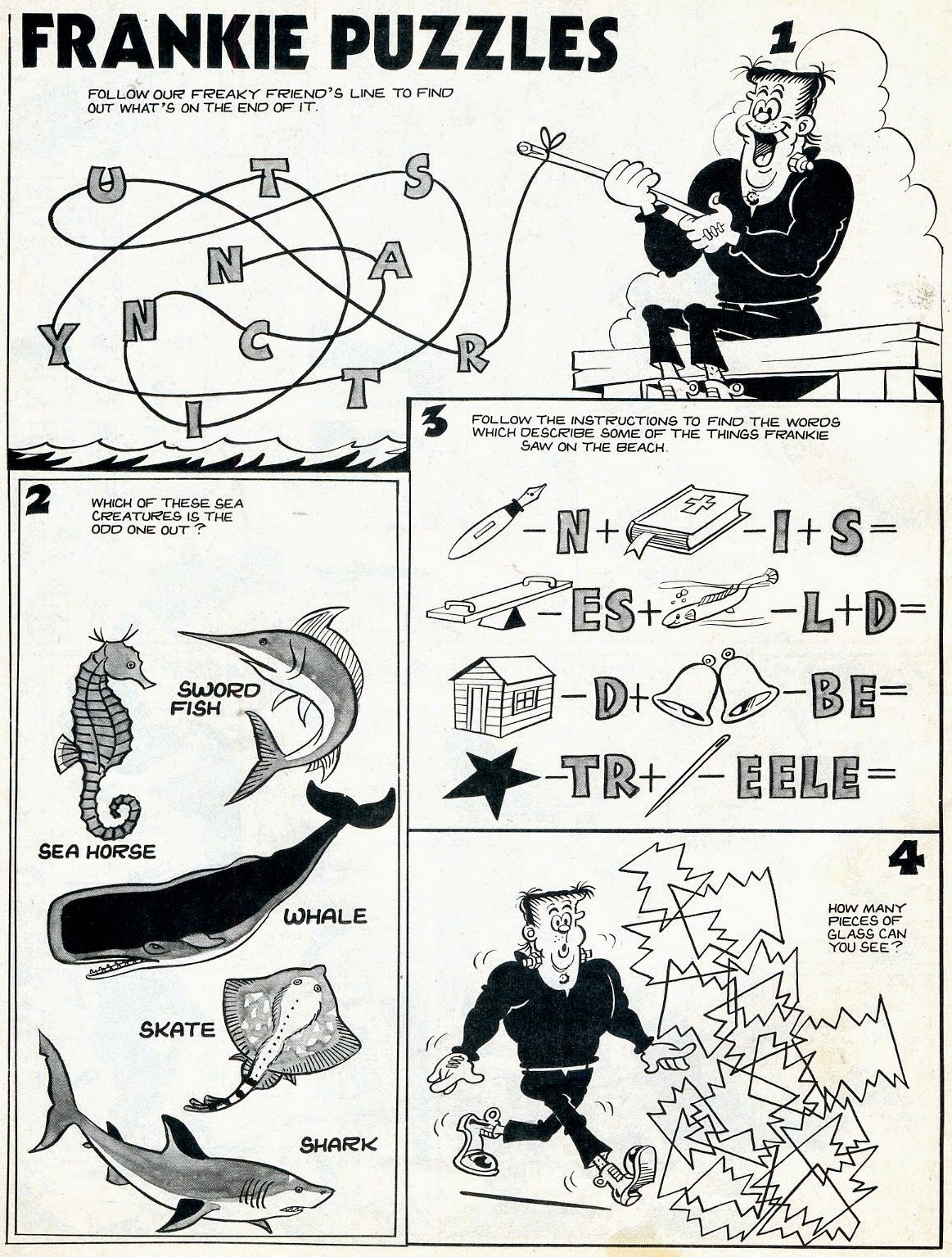 Let’s take a quick look at the rest of Frankie Stein content. Jim Crocker contributed two double-pagers of gags in the form of Frankie’s notes which strongly reminds me of Frankie’s Diary in Monster Fun Comic. One was called All the Fun of the Fair and the second – Back to the Drawing Board. Here are the first pages of both: 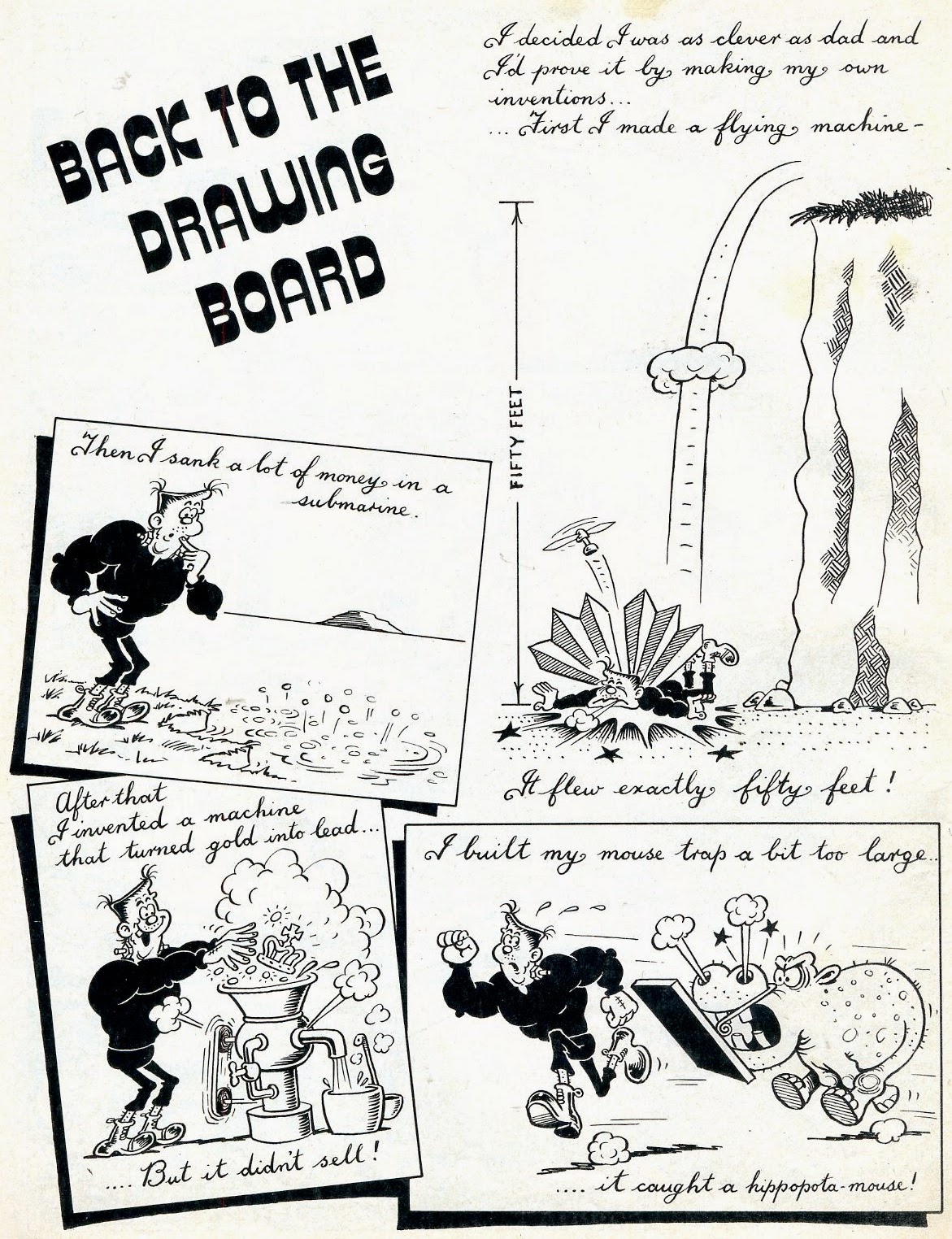 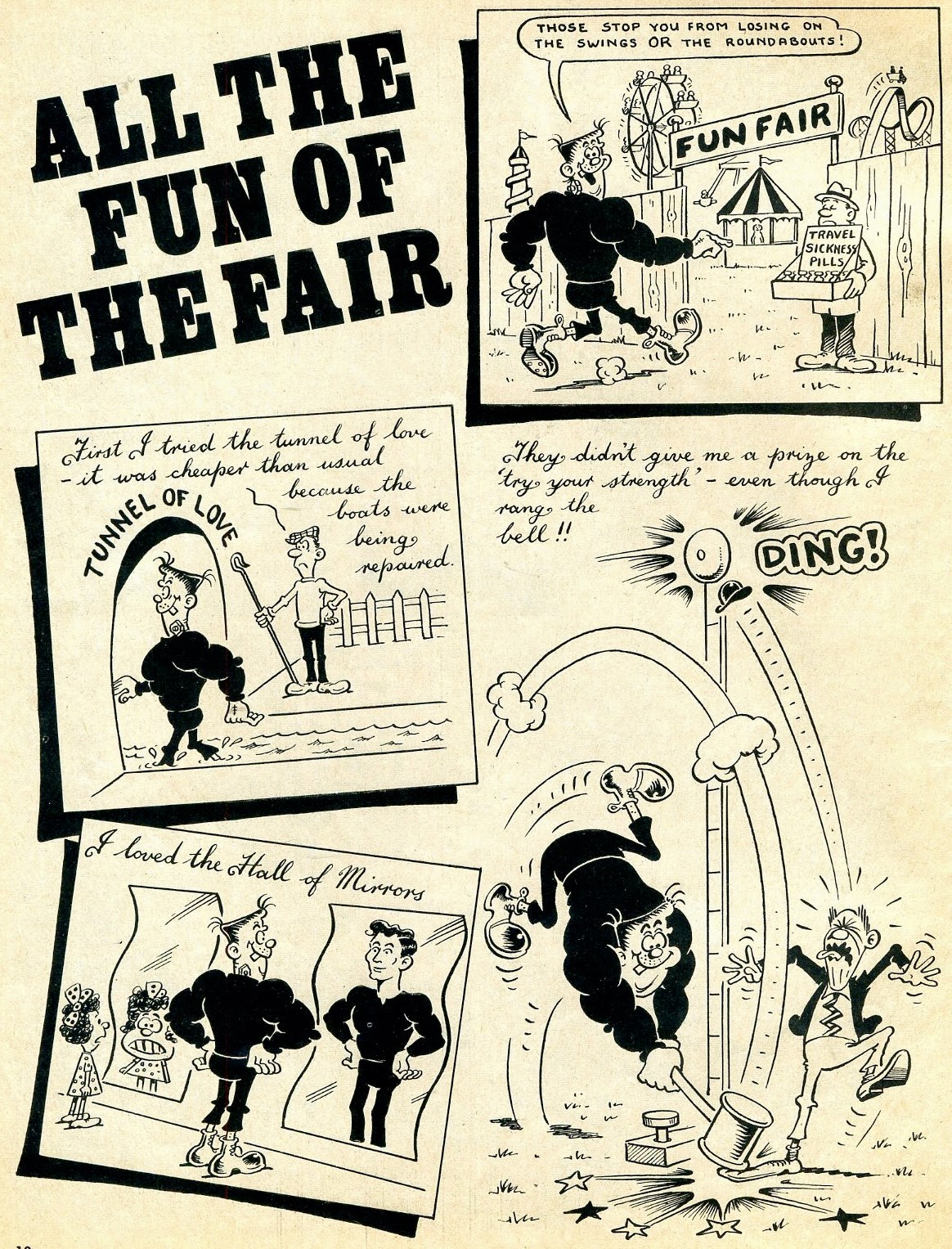 In my previous post I mentioned the interesting practice of inviting new artists to draw some Frankie Stein material for those publications. In WHOOPEE! FRANKIE STEIN SUMMER SPECIAL 1976 you can find this two-page piece called Frankie’s Camping Holiday which, I think, was illustrated by the same artist who drew Mum’s the Word in WHOOPEE!: 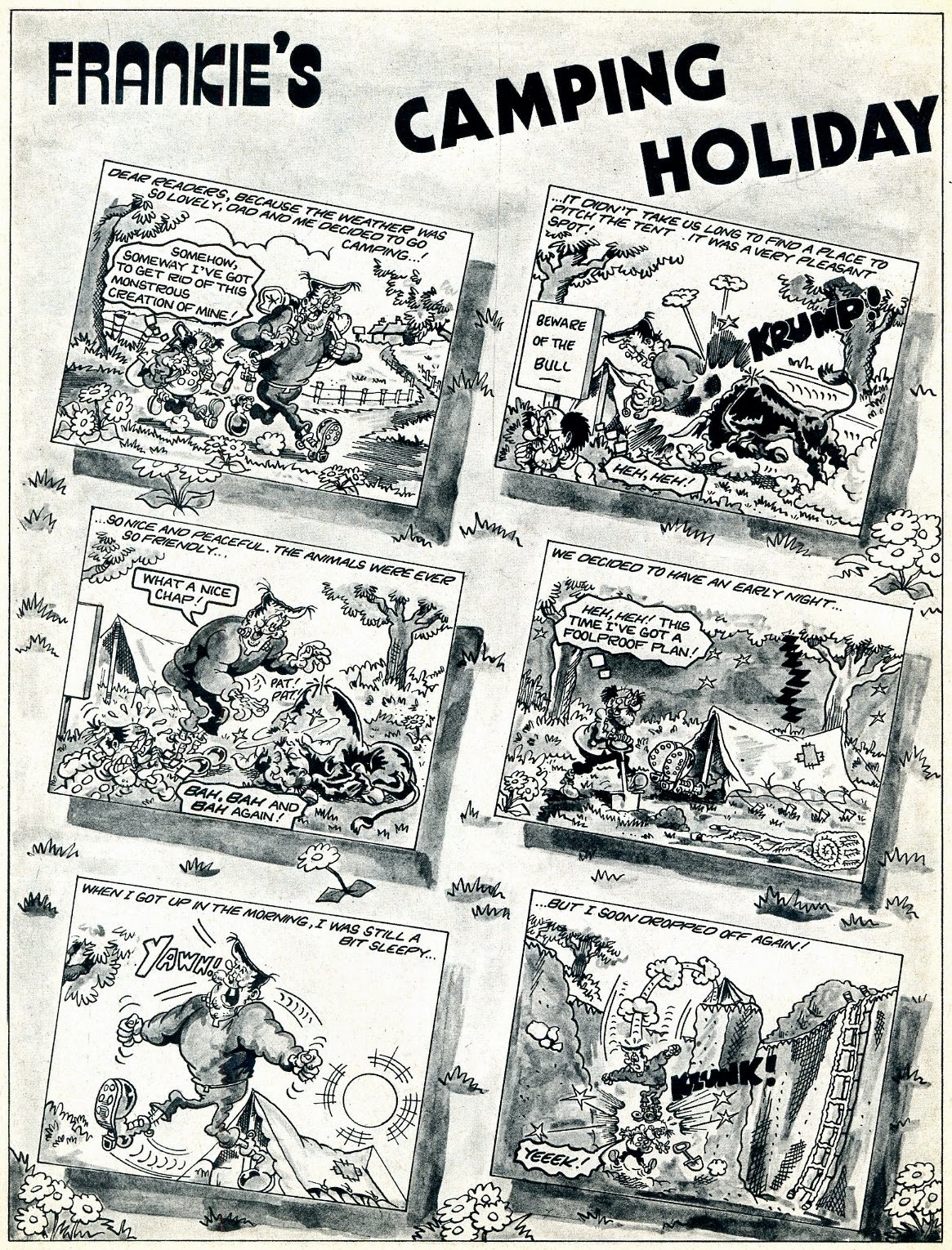 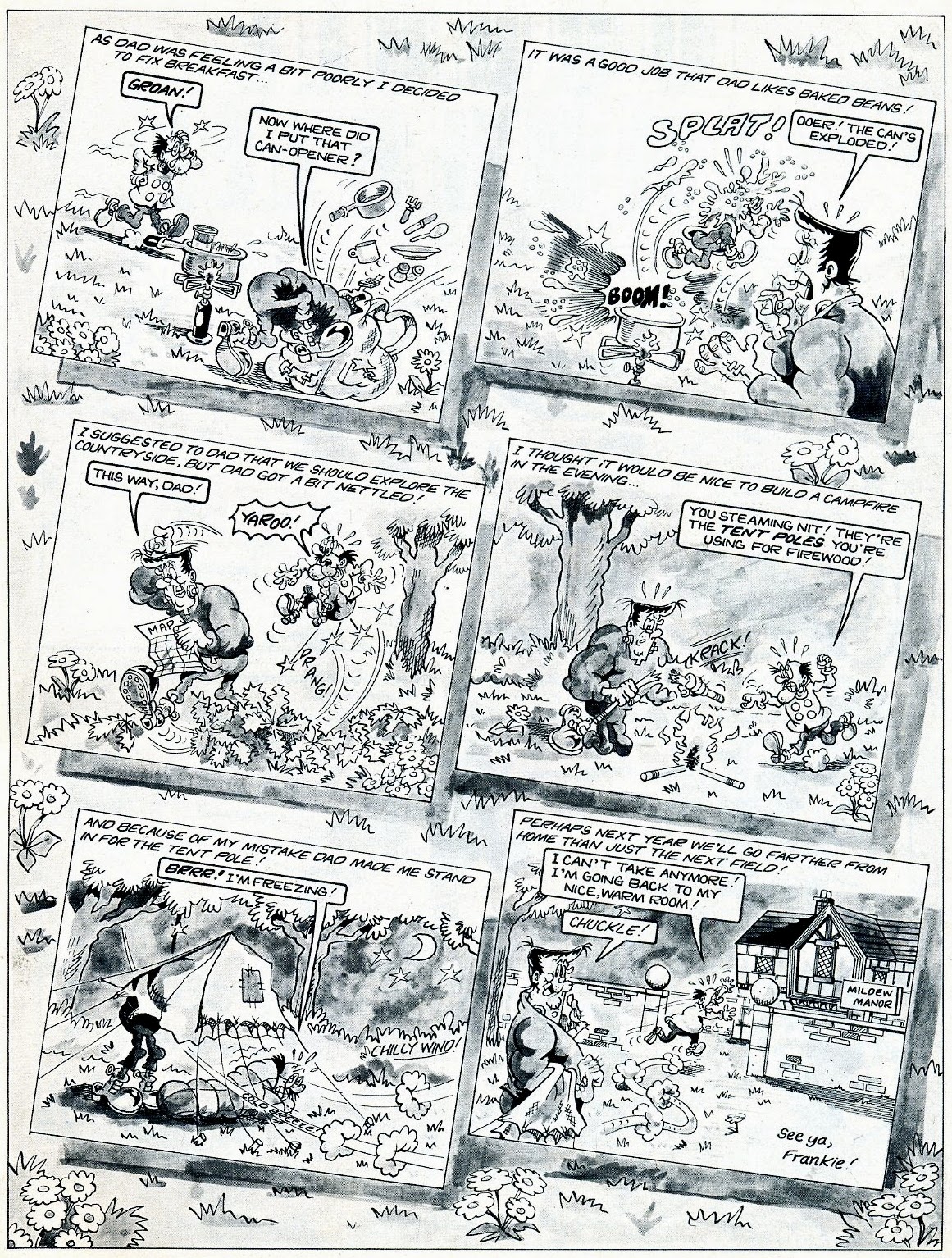 The centrespread was given to Frankie Hike! board game drawn, I believe, by Artie Jackson: 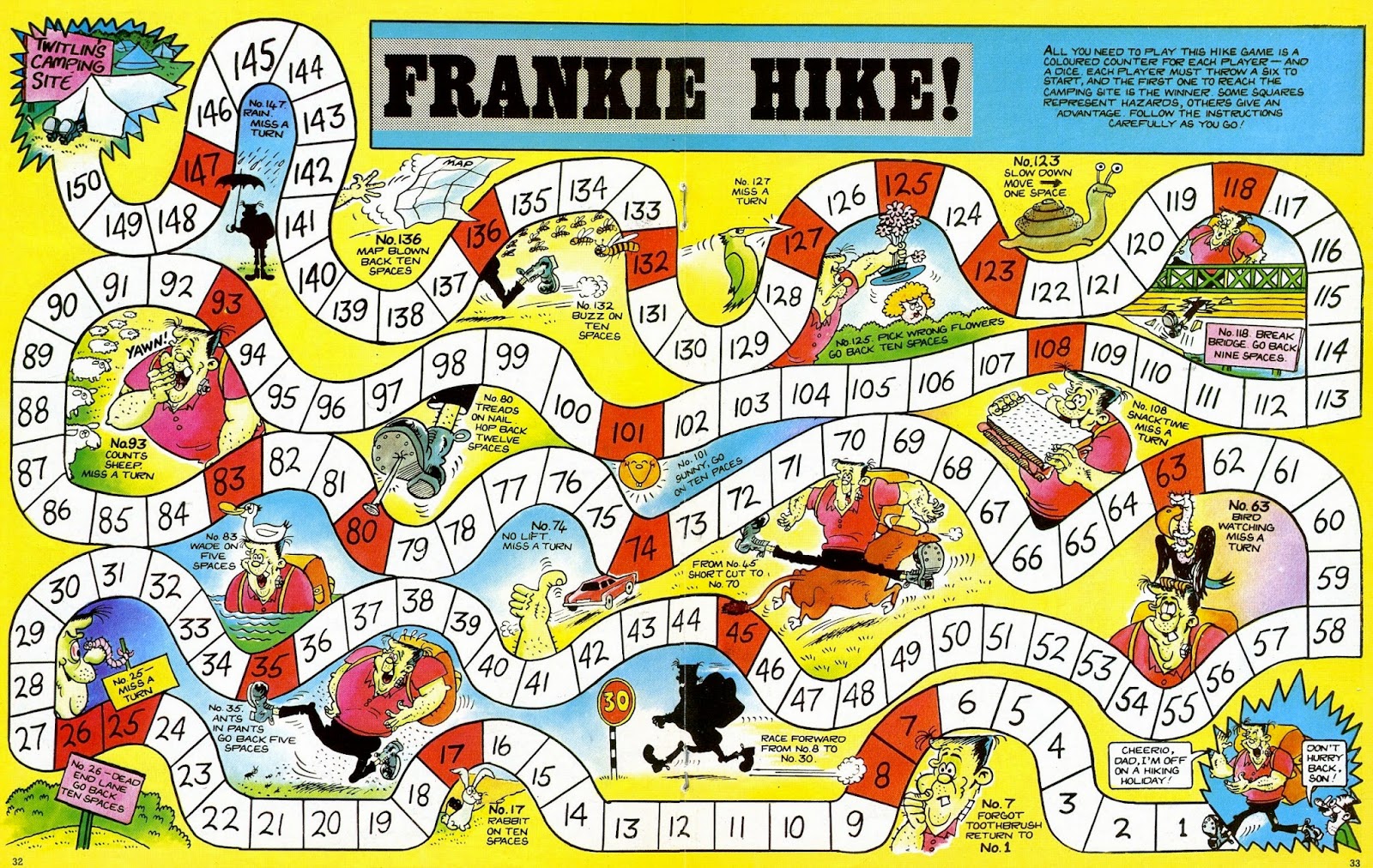 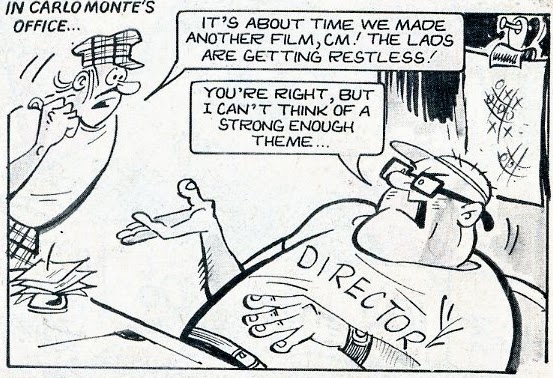 The 4-page episode of Monster Movie Makers, first seen in Frankie Stein Book 1976 and illustrated this time by Les Barton, was the only new piece of non-Frankie Stein material in WHOOPEE! FRANKIE STEIN SUMMER SPECIAL 1976. In this episode Carlo Monte, director of International Film Studios, came up with an idea to make another epic called The Curse of the Mummy and ‘borrowed’ a haunted Mummy case from the local museum.

Robert Nixon’s only contribution was the front cover – a redrawn colour version of one of the panels from the FS Around the World story by Brian Walker. I wonder who copied whom because the drawings are very much alike:

Incidentally, the original cover artwork was offered by Compal Comic Book Auctions some time ago under this description (note that they got the date wrong): Frankie Stein Holiday Special original front cover artwork (early 1980s) drawn and signed by Robert Nixon Frankie's practising his diving but 'Dad' has other ideas … Bright poster colour on board. 17 x 13 ins. The winner paid £284. Here’s what the piece looked like: 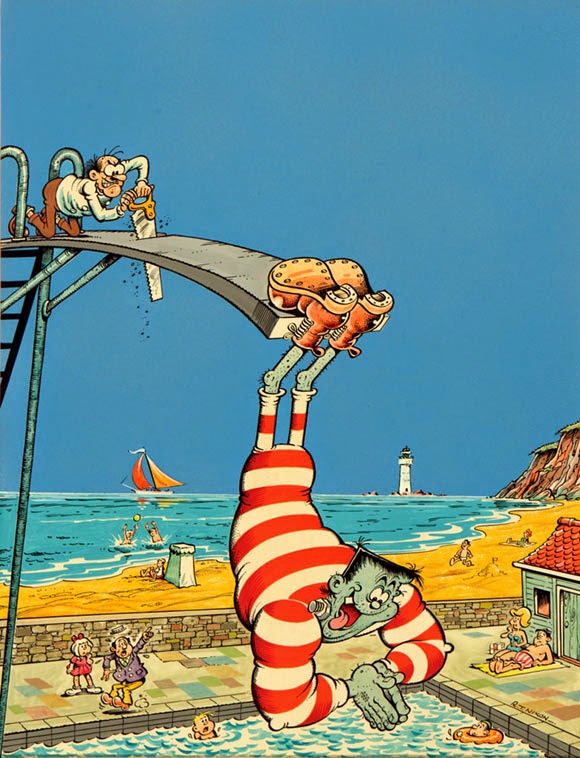