Barney’s Brain Box was a series about an absent-minded boy Barney Biggs who was able to concentrate on only one thing at a time. The problem with Barney was that he frequently fell into a state of dopiness. As a result, Barney’s fantasies and daydreams pushed reality to the back of his mind making him forget all about his errands and commitments. COR!! readers could see what went on inside Barney’s head. Barney’s “brainwaves” were portrayed as little creatures (brain-bods) inside his brain box. The conflicting nature of the brainwaves inevitably resulted in battles and humorous clashes between reality “brain-bods” and fantasy “brain bods” as the former struggled to win Barney’s attention back from the latter. To make things even more complicated, the setting kept alternating between reality and Barney’s brain box as goings-on in the real World altered the course of events in Barney’s head. Luckily for Barney, reality “brain-bods” usually prevailed, and just in time for him to avoid trouble 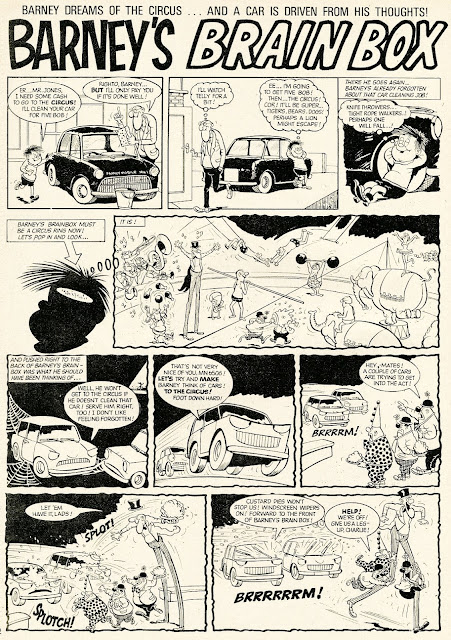 The feature only lasted for 31 weeks from the first issue until the first issue of 1971 in which Barney made a New Year resolution to think of only one thing a time and thus put an end to his problems.

The concept of Barney’s Brain Box was similar to that of a number of older UK strips such as The Nervs, Georgie’s Germs, Numskulls, maybe even Buster’s Daydreams, but it was a scrumptious feature nonetheless. The short-lived series occupied two pages (except in the issues dated 11th July 1970, 15th August 1970 and 3rd October 1970 (Nos. 5, 11 and 18) where it was 1 and ½ pages long). It was illustrated by several artists such as Mike Lacey and Tony Goffe, but the majority of the episodes were by the unconfirmed illustrator who drew Football Madd and some other strips in COR!!, Peter Davidson perhaps? 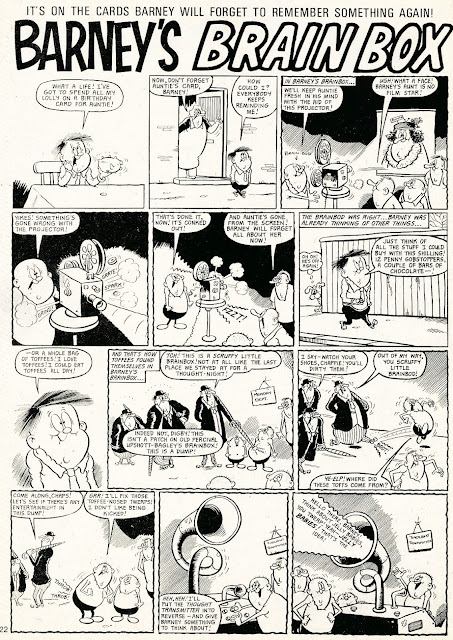