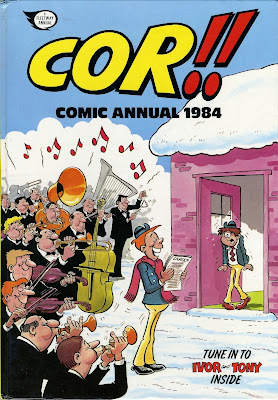 As always, the annual was a combination of reprints and new material. In the introduction to the COR!! Specials and Annuals chapter of this blog I mentioned that in reprints the panels were usually cut up and rearranged so that original one-pagers from the weeklies became two-pagers in holiday specials and annuals. This meant that some panels had to be tampered with and extended. Sometimes this involved a small effort on behalf of IPC's staff artists: for example, only the last panel had to be ‘augmented’ in this Tomboy set that originally appeared in COR!! issue dated 12th January, 1974 and was reprinted in the 1984 Annual: 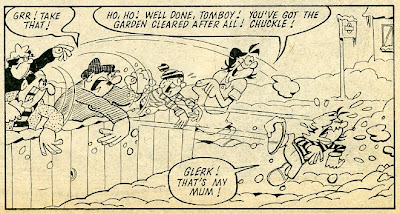 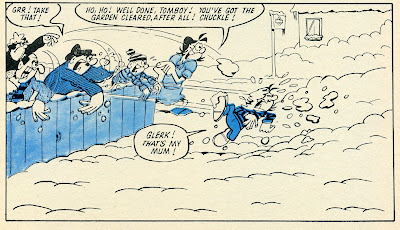 On other occasions more work was required, often resulting in awkward panelling and general layout, as can be seen by comparing the original set of Donovan’s Dad from COR!! dated 23rd December, 1972 and the reprint in the 1984 Annual: 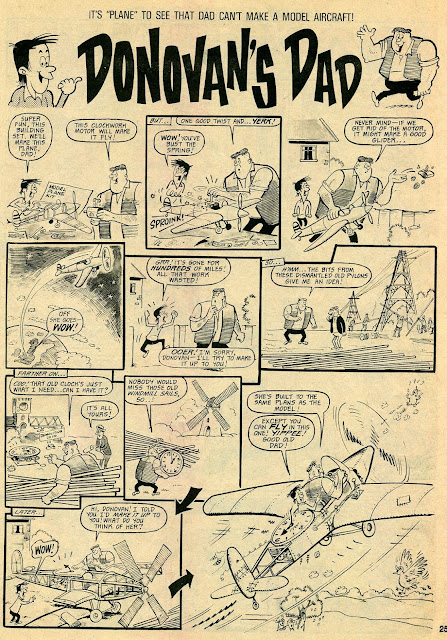 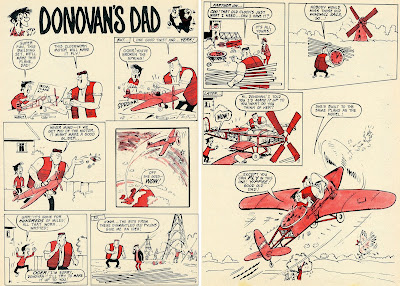 The Annual had quite a large proportion of new material, as indicated by the number of strips marked in red in the contents summary above (I will repeat myself by saying that red means that the strips were either one-offs or their appearances were limited to COR!! Specials and Annuals and they will receive their own blogposts later on).

There was only one one-off strip in this annual and it was Terry’s Tube Travels. 3 episodes of it were illustrated by Cliff Brown who also drew Timothy Tester in Whizzer and Chips for quite a long time. The tale was about Terry and the telescope that he received as a gift from his Grandad who owned it as a lad. Whenever Terry looked through the telescope, he got transported to the place that he looked at (be it Mars, ant-heap or Easter Island): 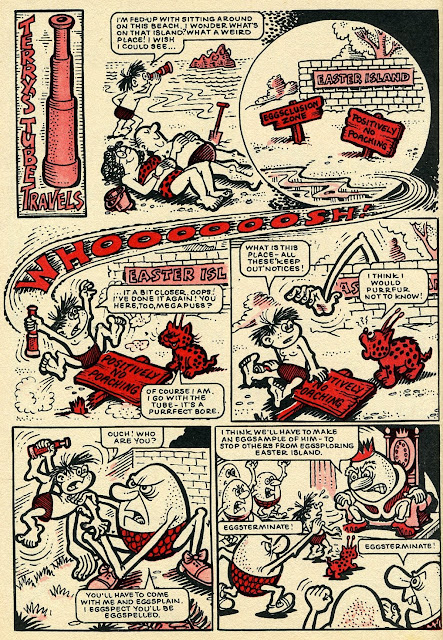 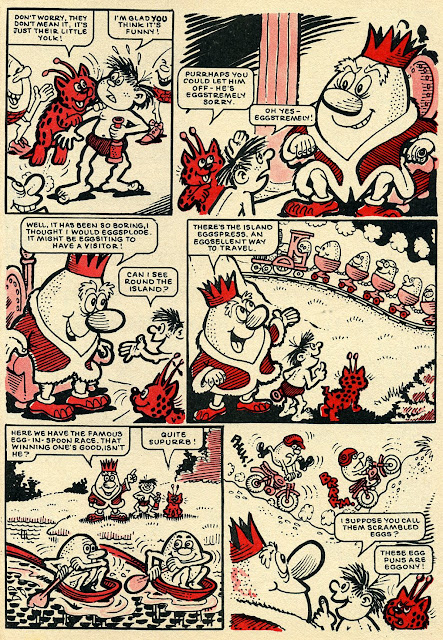 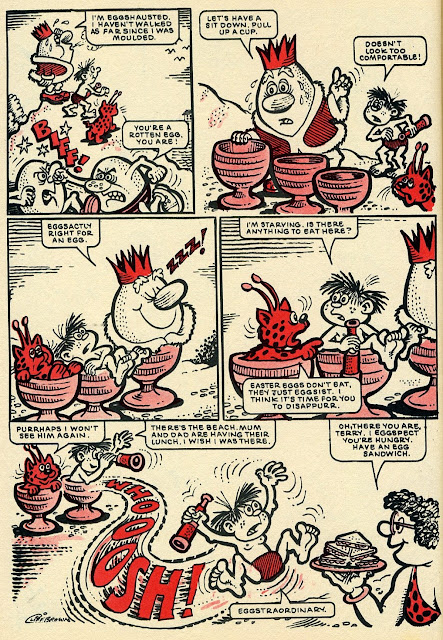 In an earlier post I labelled Percy Grower and his Fantastic Fertiliser as an one-off. Well I was wrong because it made its second appearance in this Annual. The artist’s style is so distinctive that when I first looked I automatically assumed it was yet another episode of Benny Bendo. So, it is now official that Percy Grower and his Fantastic Fertiliser was not an one-off and appeared in two COR!! annuals.

The Annual contains new sets of two of my favourite strips in COR!! specials and annuals – The Gasworks Gang by Frank McDiarmid and Jasper the Grasper by Les Barton, both shown below in full. I particularly like the latter. 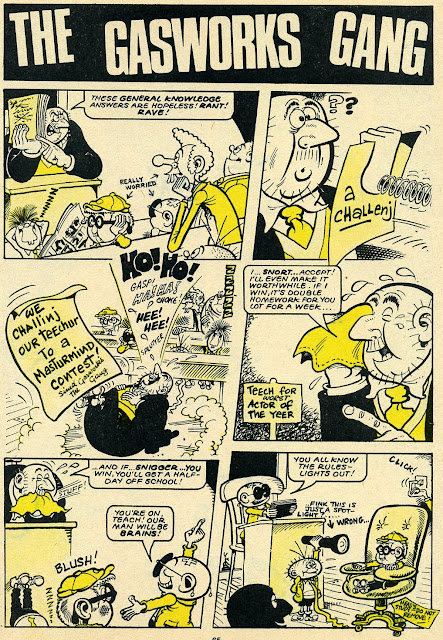 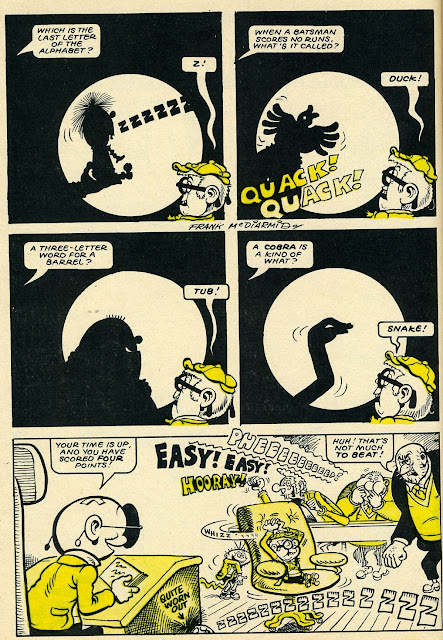 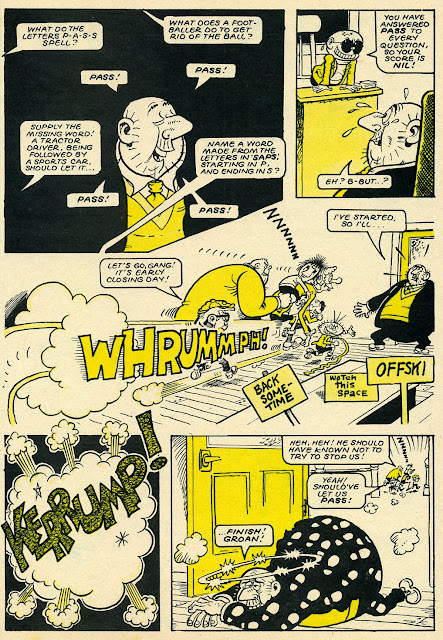 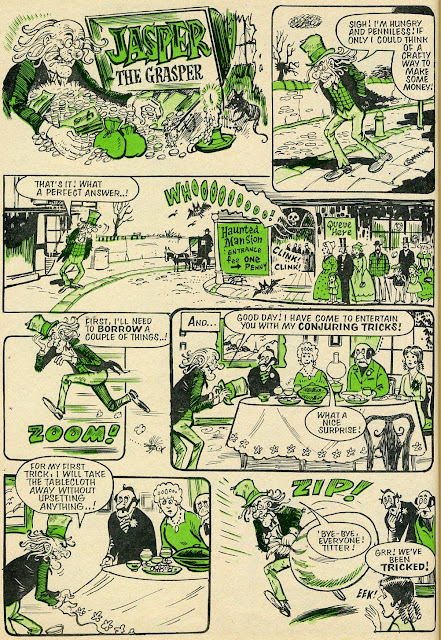 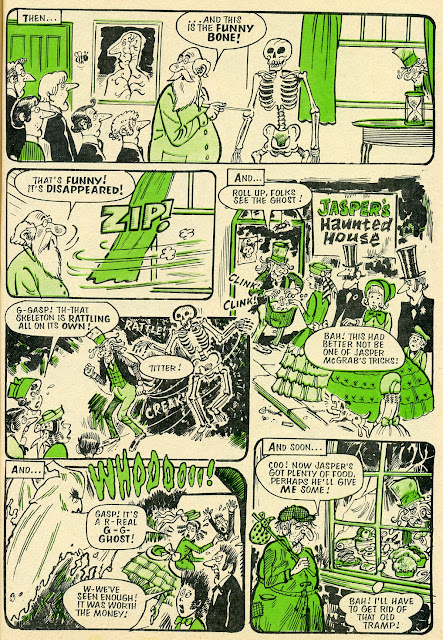 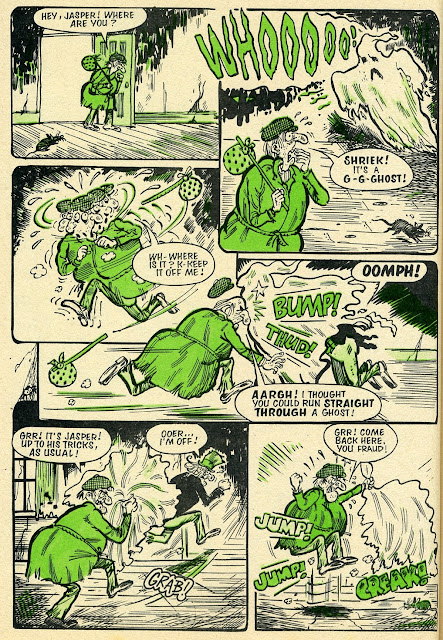 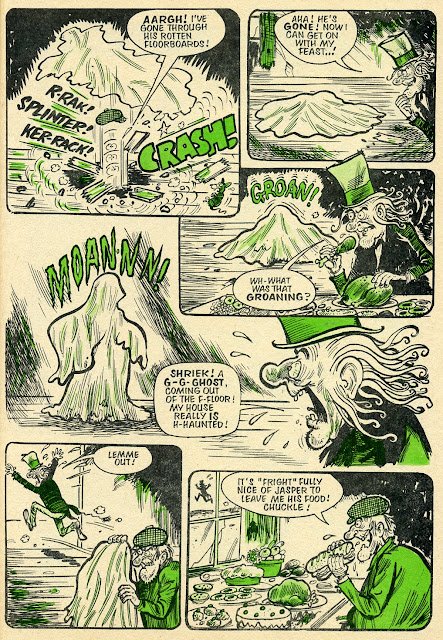 The episode of Fiends and Neighbours came with an original masthead. Here is the opening page: 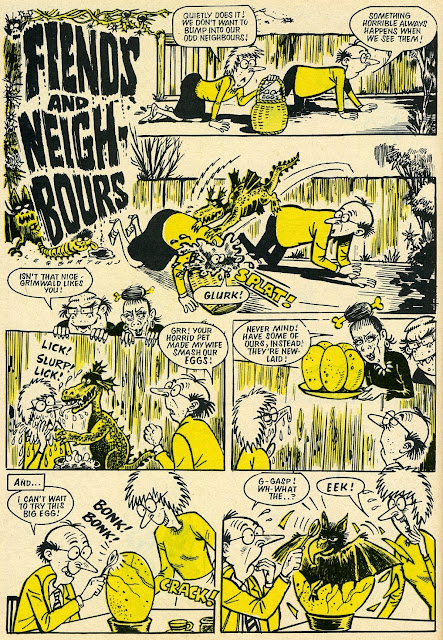 Posted by Irmantas at 2:40 PM No comments:

Donovan's Dad. The series was about a little lad named Donovan and his extra-strong but rather dim working class Dad with super-powers who didn’t know his own strength:  he could knock a torpedo off its course, lift railway tracks into the air to save a runaway car and land an airplane without undercarriage. If he flung a snowball, it could whistle half-way round the globe and hit a native in Africa... Starting from COR!! issue dated 8th May, 1971 (No. 49) the two of them set off on a World tour. They got stranded on an island, met cannibals, visited Australia, New Zealand, Mexico, the USA (Texas), Italy (Pisa, Venice), France (Paris) and returned to England in issue dated 31st July, 1971 (No. 61).

The black and white one-pager enjoyed a long run of nearly three years from the first issue until 14th April, 1973 (No. 150). The original artist was Terry Bave.  In part II of his detailed account in the Summer 1986 edition of GOLDEN FUN Terry Bave recalls that Donovan’s Dad had been devised by Bob Paynter who invited him to create the necessary characters for the feature. Terry Bave’s drawings were approved and he agreed to take on the weekly drawing provided that the scripts were supplied. With all the work they were doing for WHIZZER AND CHIPS as well as COR!! at the time,Terry Bave and his wife Sheila already had quite enough script writing as it was.

Terry Bave’s account tells that although great fun to draw, Donovan’s Dad did not prove quite so popular and only ran until mid-1971. This isn’t exactly true: the artist probably recalled the time in 1971 when he stopped drawing the feature and it was taken over by another illustrator who I believe was Les Barton. The last set by Terry Bave was in COR!! issue dated 13th November, 1971 (No. 76) and the first one by Les Barton appeared a week later.