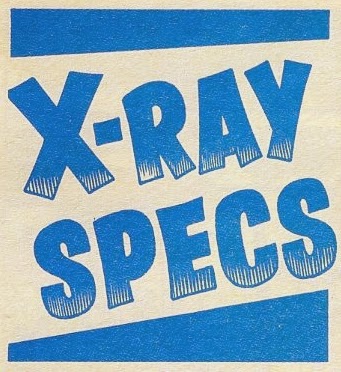 Ray was as an ordinary boy until a mystery optician (I.Squint) gave him a pair of specs with x-ray vision. From then on he became one of those kids with gimmicks that were so common in IPC comics. The specs were quite a peculiar piece of eyewear – they enabled Ray to see through things – humans, walls, ground, bushes – everything. The specs also worked in reverse: 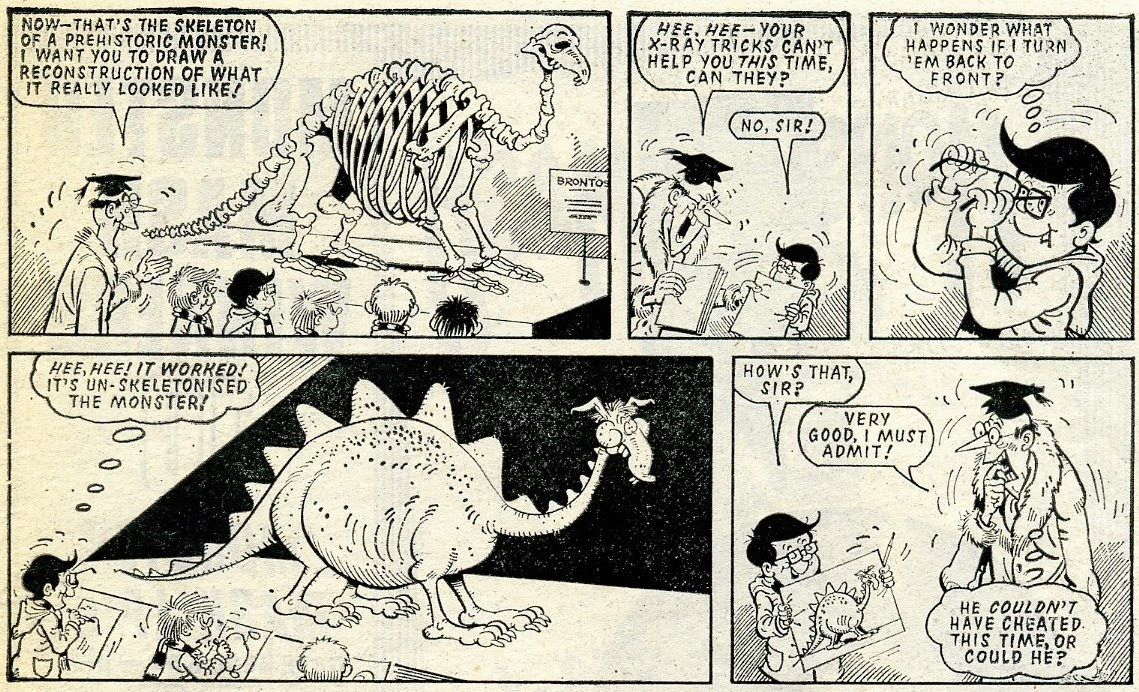 … they worked fine even when covered with paint: 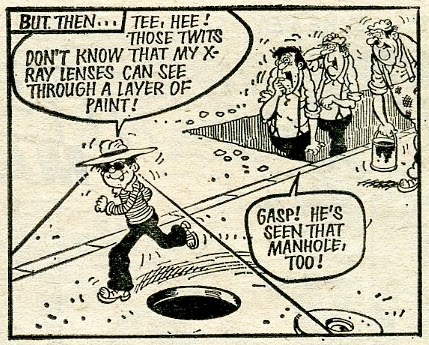 … they granted x-ray vision to anyone who put them on, including animals: 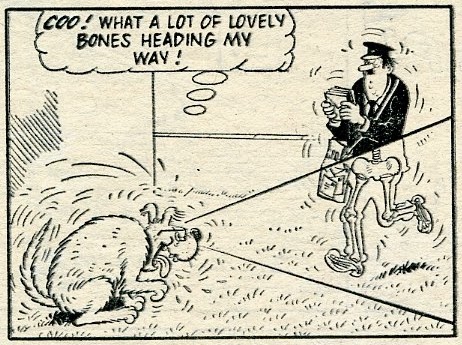 … and this is what happened if you put them on a camera lens in a TV studio during a live broadcast: 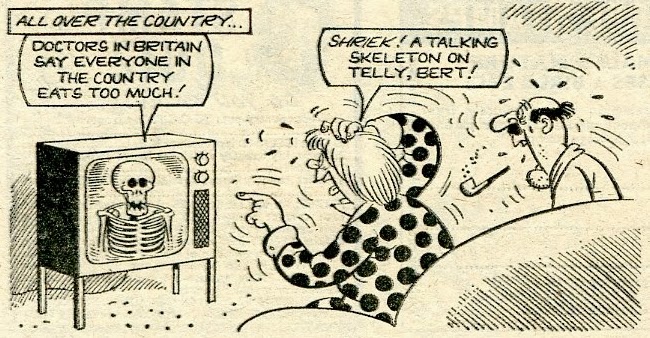 His magical specs gave Ray the advantage of being able to warn people of looming dangers, help them find lost things, see hidden passages and tunnels, etc. Quite often he put his x-ray vision to good use by helping catch crooks and robbers, expose cheats and teach bullies a lesson. On a few rare occasions he himself was seen cheating or trying to use the x-ray vision for his own ends but his efforts usually backfired.

At first other people didn’t realize Ray had this special talent but soon it became common knowledge among his friends and family. Friends sometimes hated him because the specs made him such a know-all; at the same time, wearing them was quite taxing: x-ray vision could be tiring at times and wouldn’t go away even if Ray took his specs off : 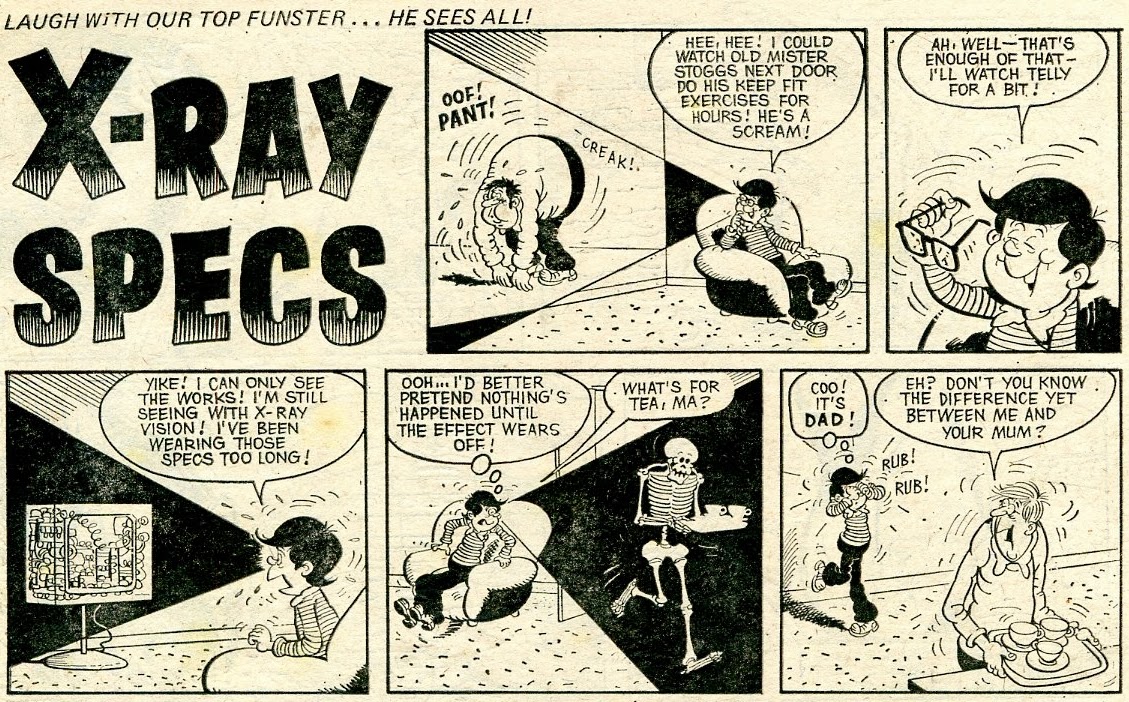 Wearing the specs could also be rather stressful for those who weren’t used to them. The episode below is from issue No. 62: 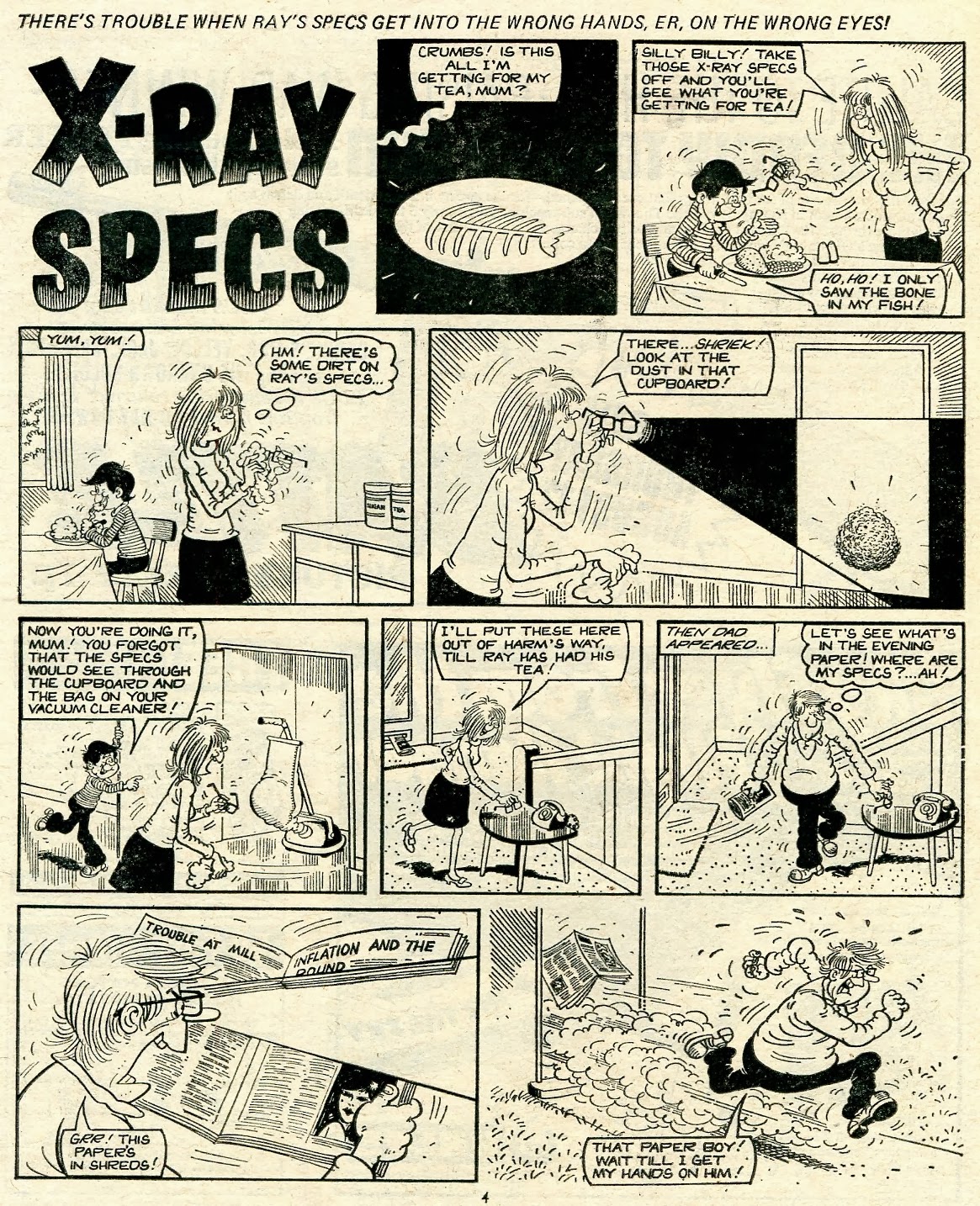 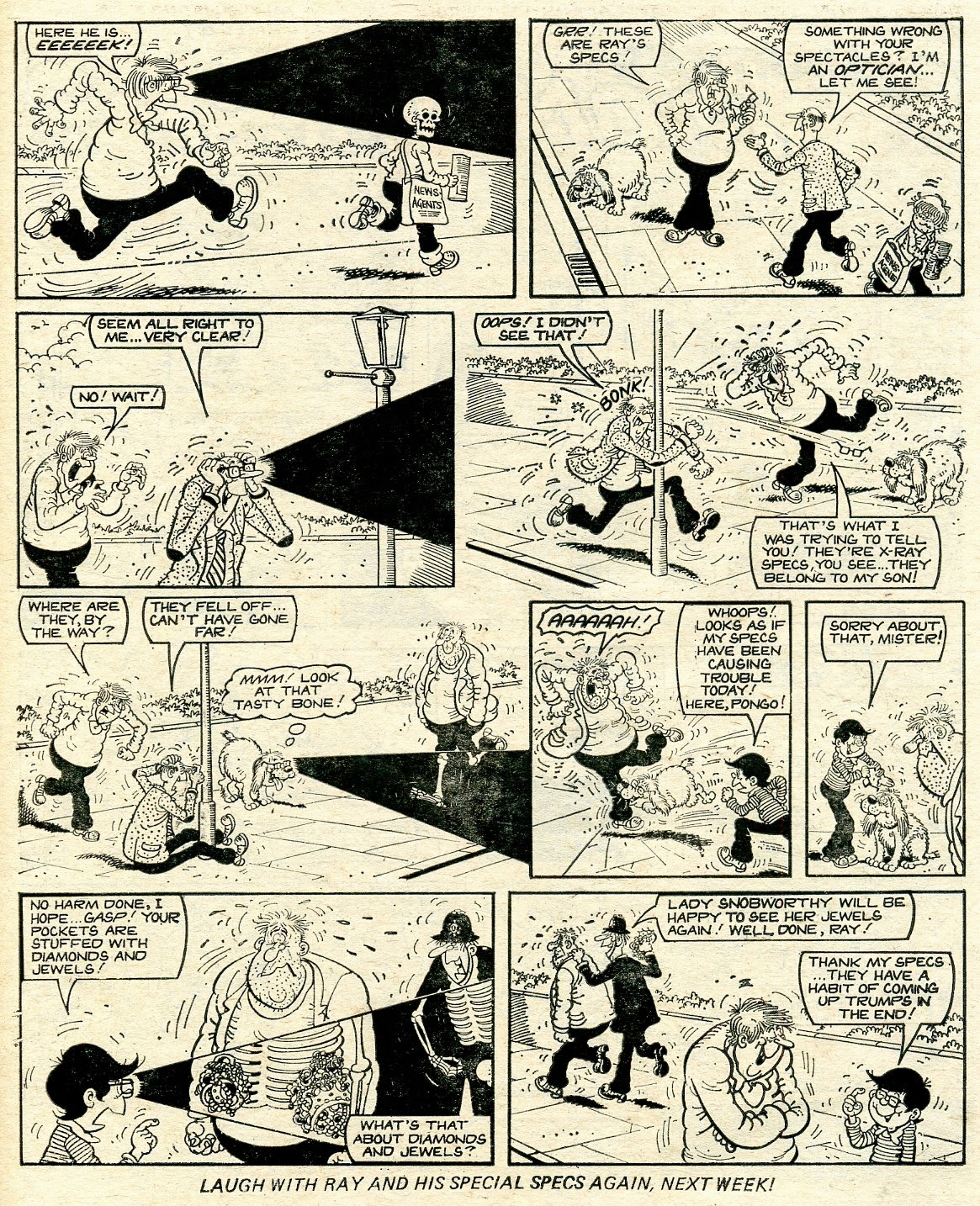 Monster Fun COMIC was a ‘horror’ paper, so each strip was supposed to have a scary element in it.  In X-Ray Specs it was the skeletons that Ray (and the readers) could see courtesy of x-ray vision. There were two or three nice episodes with real spooks; here is one from issue 57: 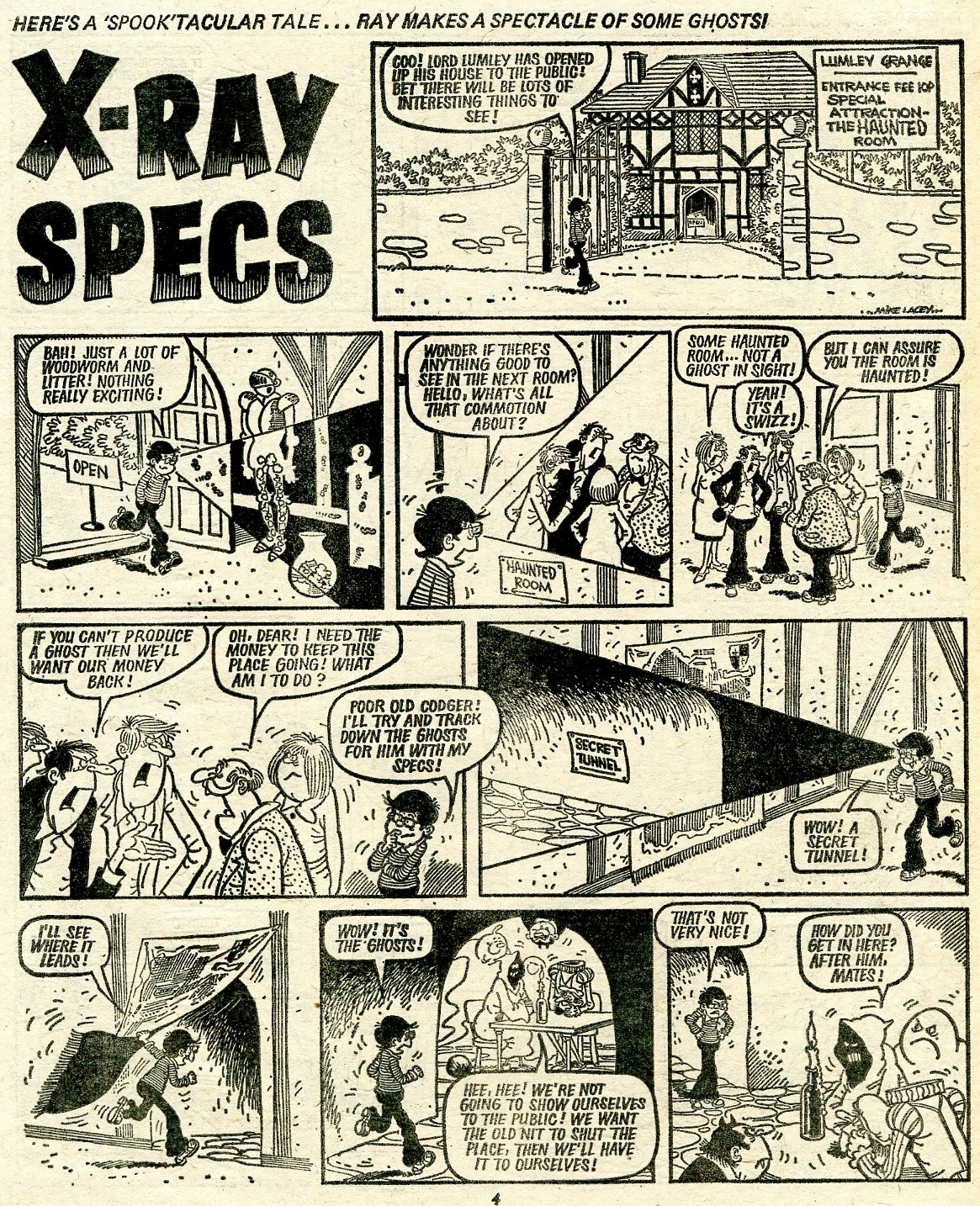 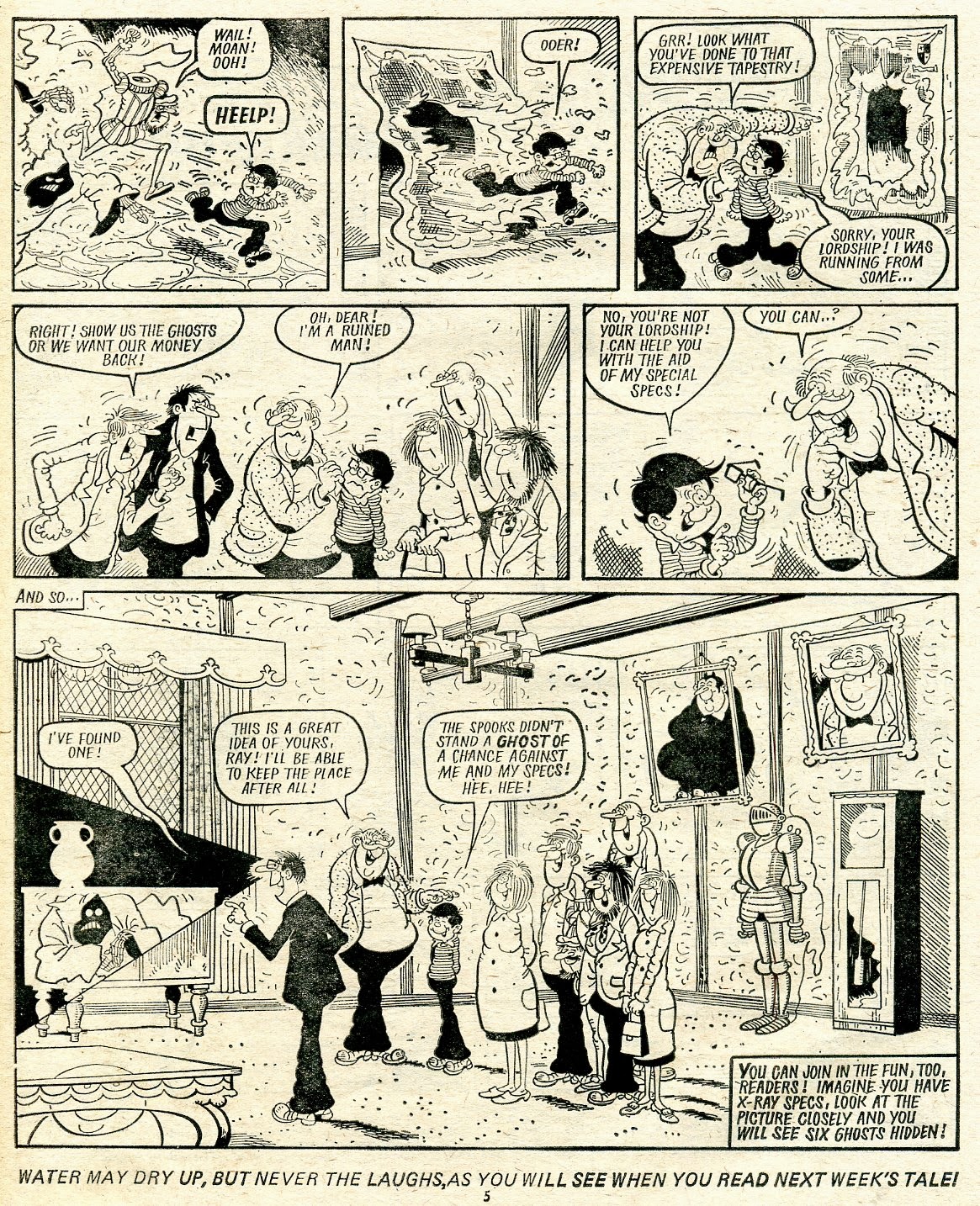 Speaking of skeletons, in the episode in MFC No. 7 Ray found a free shaking skeleton in a packet of cornflakes. A similar freebie was offered with the third issue of MFC and from the look of it in the drawing below, the two were exactly the same. It would be interesting to know if a free skeleton was indeed offered by some cornflakes manufacturer at that time.

X-Ray Specs first appeared in MONSTER FUN COMIC No. 1. The strip didn’t miss a single week during the 73-week run of MFC and survived merger with BUSTER where it lasted till the final issue of the comic and nearly made it to the 21st century! The vast majority of the 73 episodes in MFC were illustrated by Mike Lacey; Terry Bave contributed three sets in issues 11, 12 and 13, and five episodes in issues 37 to 41 were drawn by an artist whose name I don’t know. The first episode was only one page long, but starting from MFC No. 2 the strip was given 1 ½ pages and a more-or-less permanent slot on pages 8 – 9 and later 10 – 11. X-Ray Specs must have done very well in the popularity charts because starting from issue 33 it became a two-pager and was moved forward to pages 4 – 5. X-Ray Specs made four front cover appearances in issues 3, 6, 15 and 20. Here is an example: 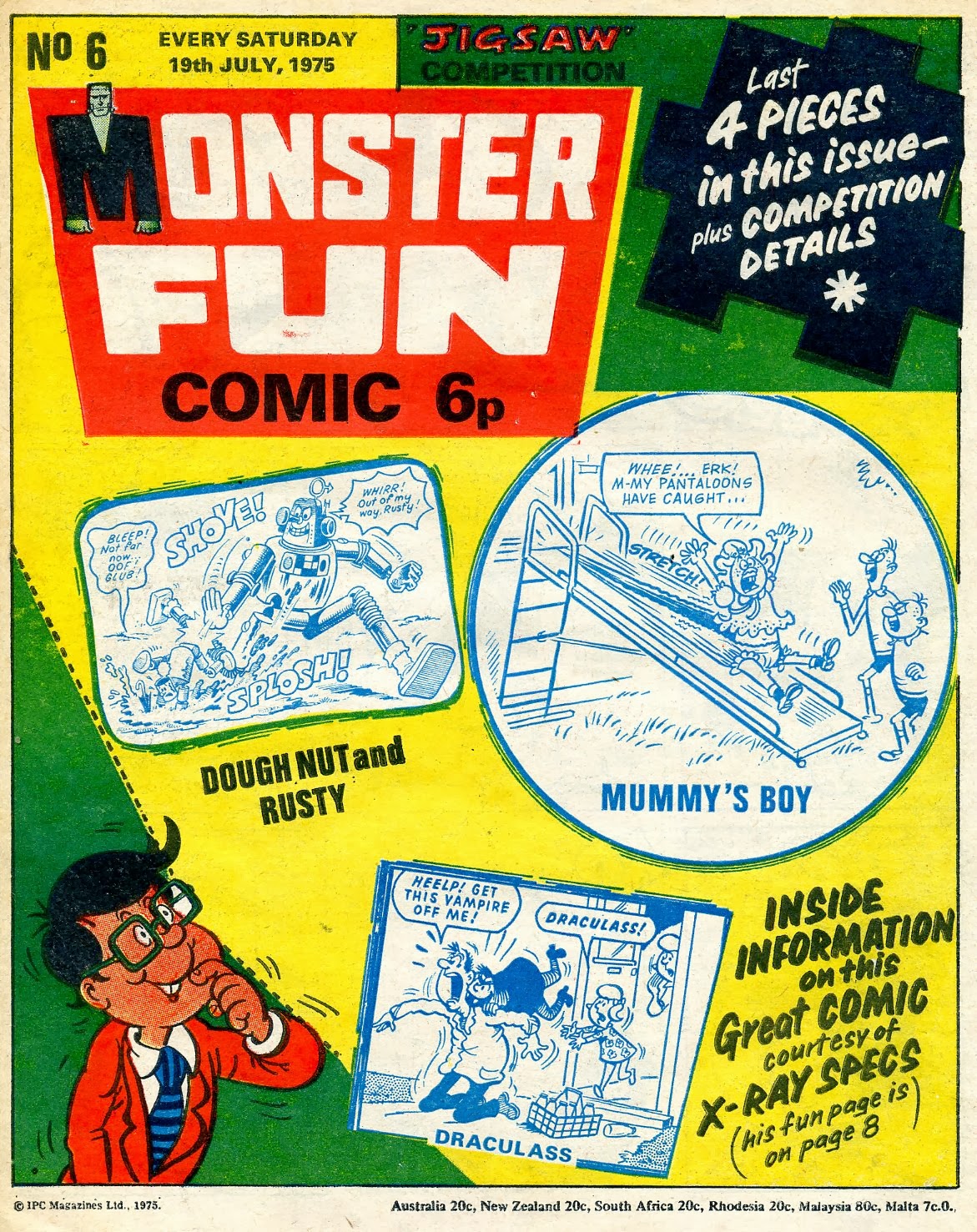 Incidentally, the idea of Ray scanning through the insides of a comic was re-used in the strip two weeks later (in issue No. 8) when Ray used x-ray vision to read MFC without buying it and Frankie (in his capacity of the Honorary Editor) wasn’t so thrilled about it…

I will finish this post with a complete episode from issue No. 55 which I find rather funny: 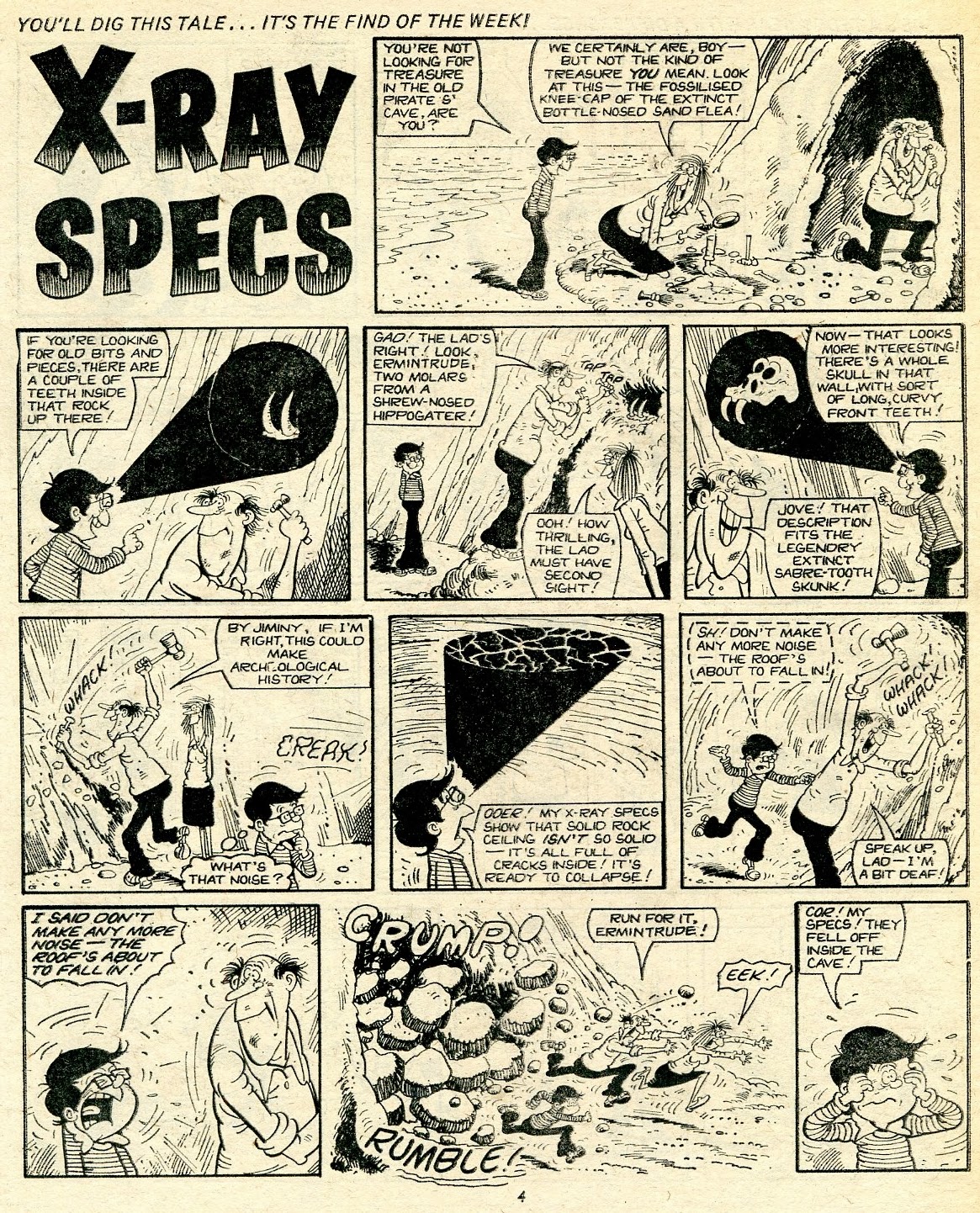