A LOOK AT MONSTER FUN STRIPS: MARCH OF THE MIGHTY ONES


Adventure serials involving man-made mechanical monsters were rather common in UK comics of the 60s and the 70s – The Toys of Doom in BUSTER, Von Hoffman’s Invasion in JET and later BUSTER, Young McDonald and His Farm in COR!! Holiday Specials and Annuals are some of the memorable examples. March of the Mighty Ones was MFC’s offering in this genre, and an excellent one too. 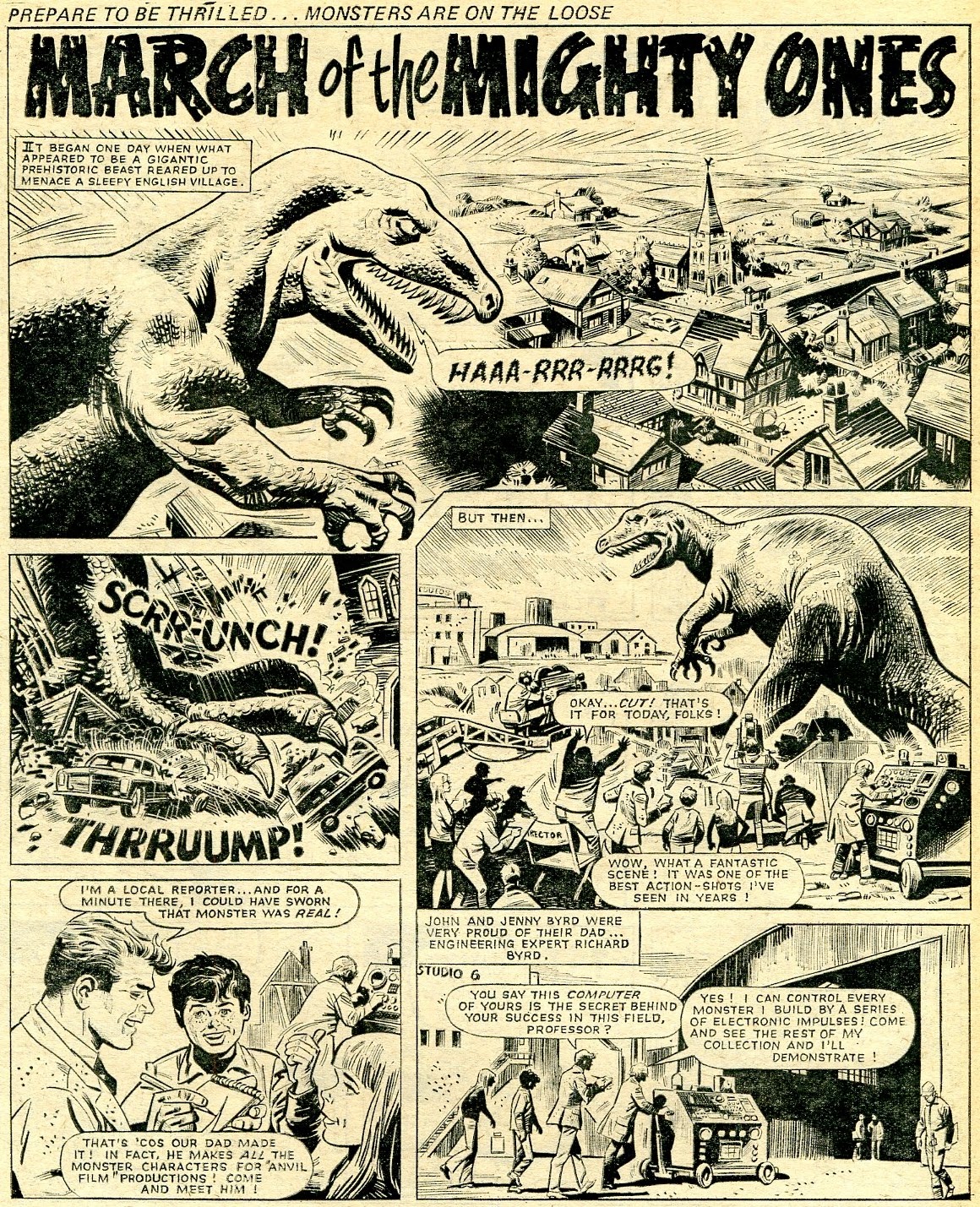 John’s and Jenny’s Dad Richard Byrd is an engineering expert who works for Anvil Film Production Studios as constructor of realistic life-size mechanical monsters for various film projects. He can control all his creations by electronic impulses sent from his central computer. In the first episode the engineer and the whole film crew are off to do some location filming of Abominable Snowman in Tibet, leaving John and Jenny behind to look after the hangar full of monsters. Things go wrong the next night when the central computer is struck by a bolt of lightning, activating the horde of giant prehistoric creatures and sending them on the march. All of them are in aggressive attack-and-destroy mode, the local police station is flattened, all phone lines are down, the monsters spread across the area and the whole country is in grave danger. Local population flees in panic.  Being the only ones with the knowledge of the robots needed to destroy them, the young Byrds stay behind and set off on a mission to track the monsters down and destroy them one by one. 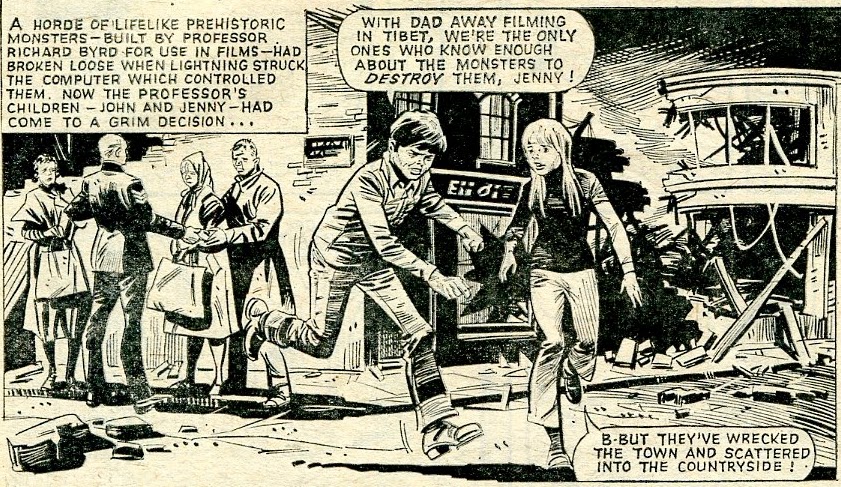 This was the general background for John’s and Jenny’s weekly dramatic encounters with the various mechanical beasts. John had memorized lots of details about each and every monster, so he always knew their exact weak spot or the place where their vital parts were fitted. Young John Byrd had a good memory because the number of beasts he and his sister Jenny tackled during the 73 episodes of the story was quite impressive – I have counted 25 individual monsters and 8 groups between two and a few hundred ‘things’. 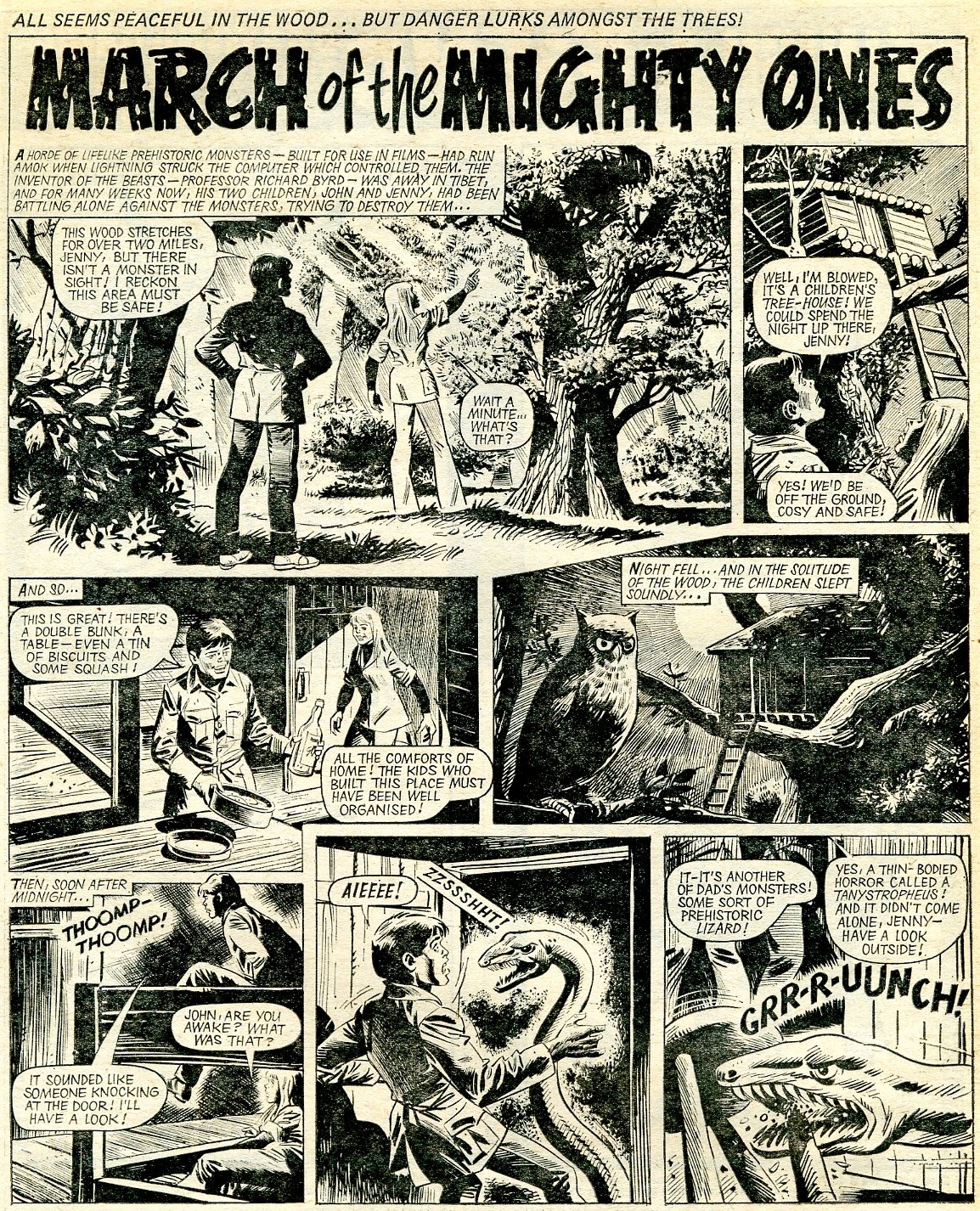 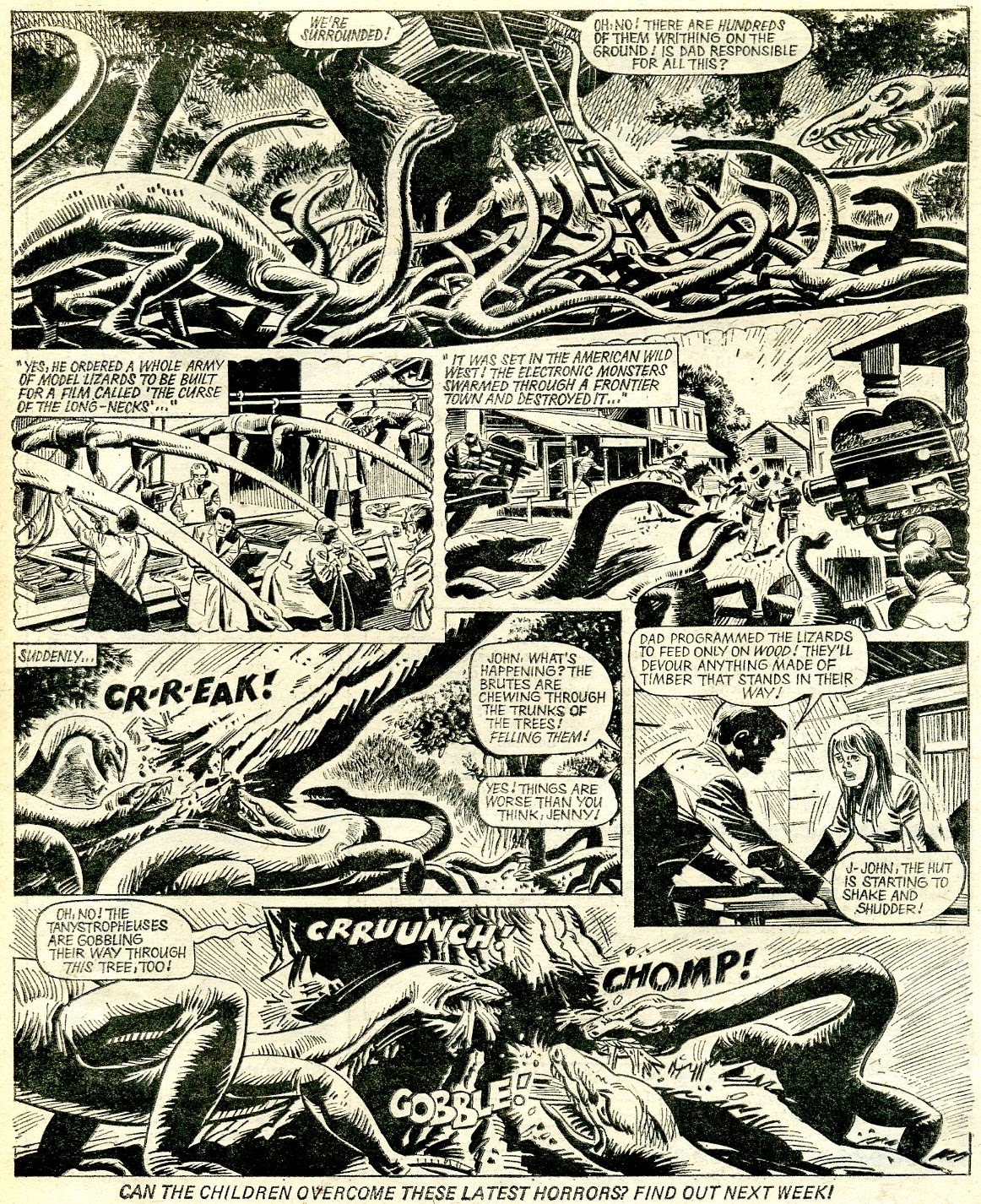 The vast majority were replicas of real dinosaurs and pre-historic animals – such as Tyrannosaurus, Pterodactyl, Archaeotherium, Iguanodon, Glyptodon, etc. etc.; a few were fantastic creatures – such as a giant ground sloth or a cross between a camel and a pre-historic horse capable of firing electric power bolts from its stubby trunk. There were some homo sapiens specimen as well – such as a pair of mechanical prehistoric cave-men and even two professional criminals and bank robbers Jim and Joe; these two were different from the rest because rather than being part of the horde of the monsters running amok, they were crazy marauders looking to plunder the deserted town crawling with monster machines.

In issues 54 to 56 John and Jenny got caught in cross-fire as they accidentally found themselves in a private safari park full of real feline predators and had to fight a twenty-ton Hydrosaur at the same time: 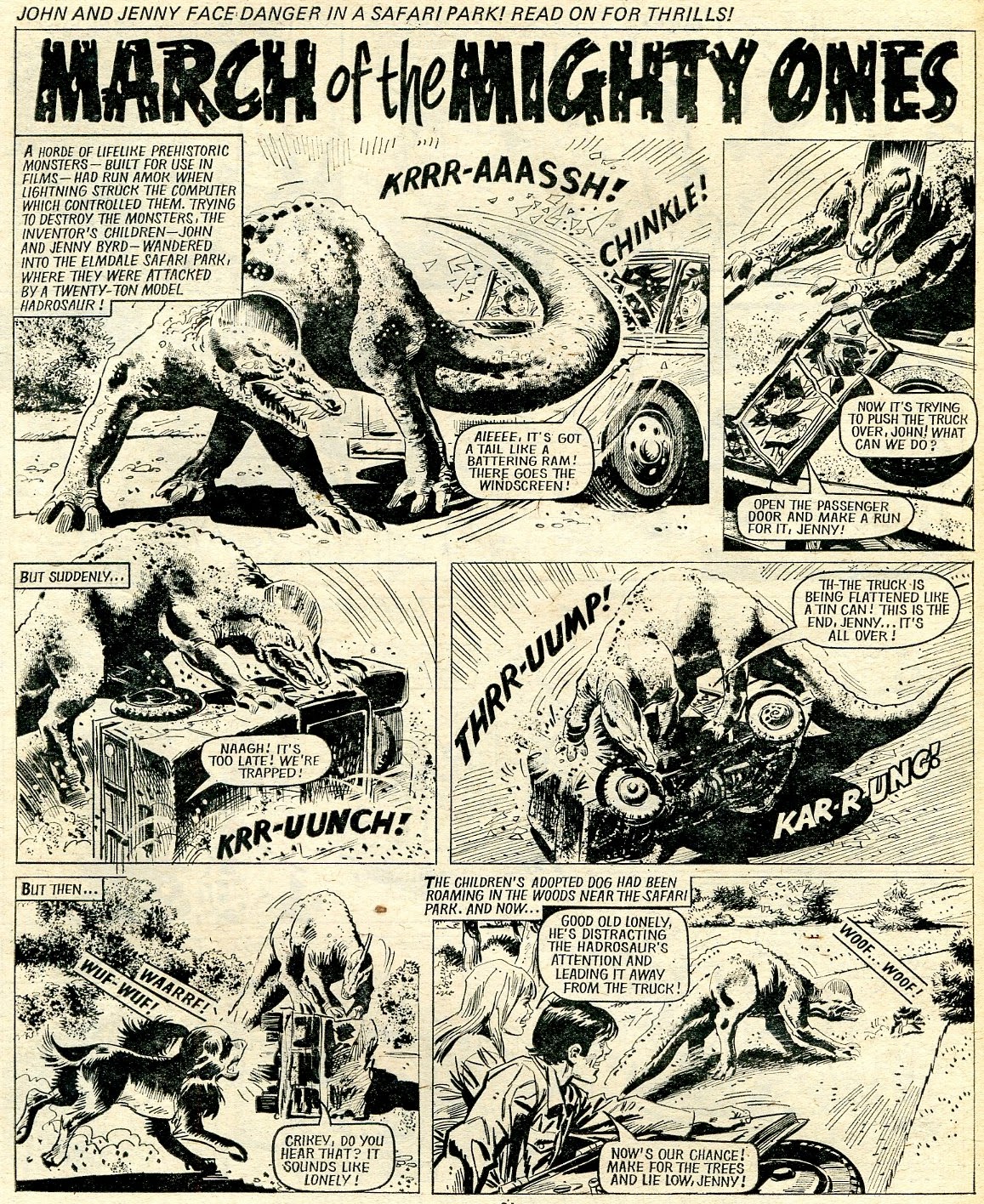 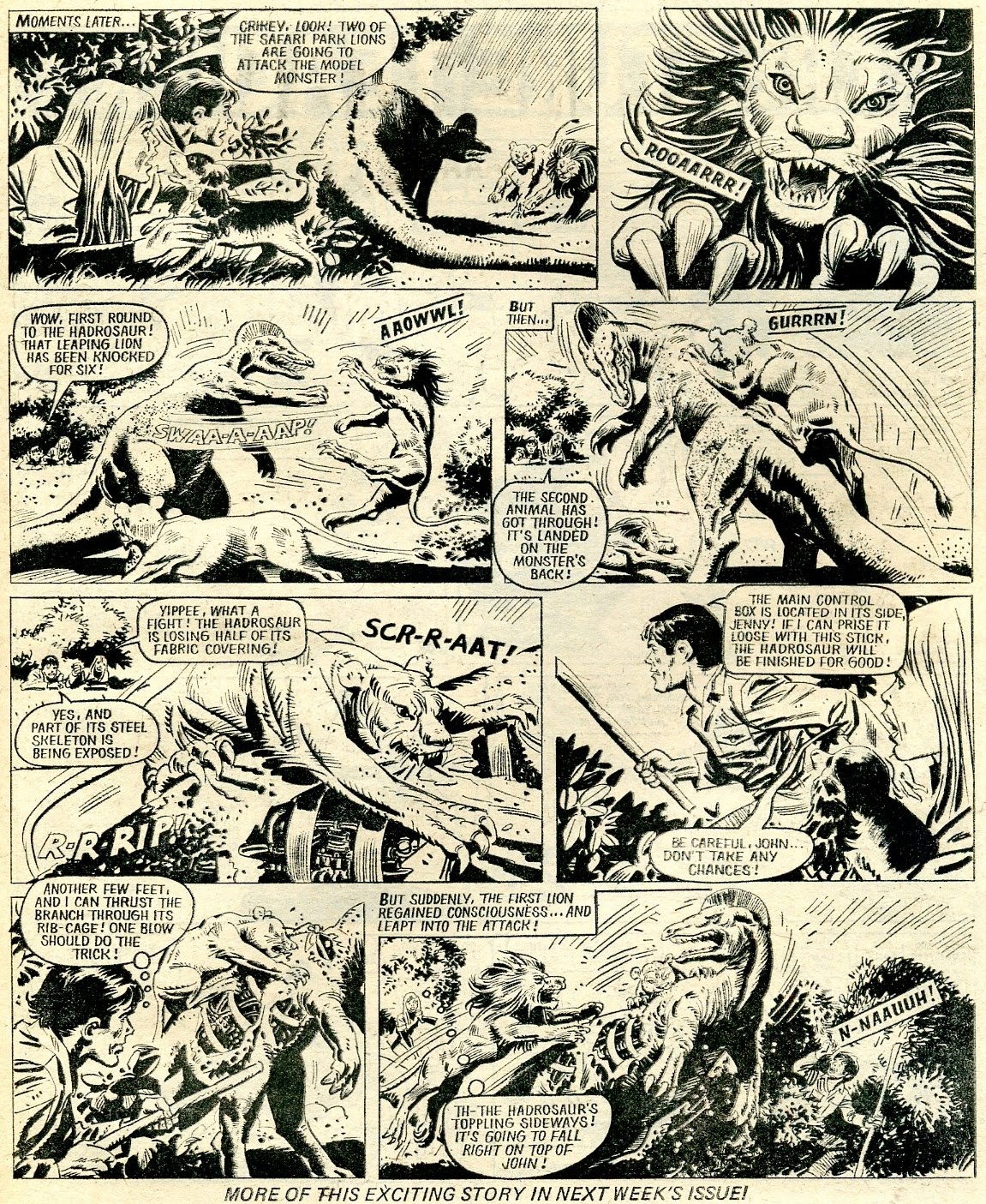 The young Byrds were quite inventive in their means of destruction: sometimes the two monster-slayers used heavy construction machinery to wreck the fake monsters, sometimes they burned or drowned them, and very often they smashed electronic brain circuits and main control units of the predators or removed fuses from their systems. This usually caused the mechanical beasts to go BA-THOOMPA! in flames. 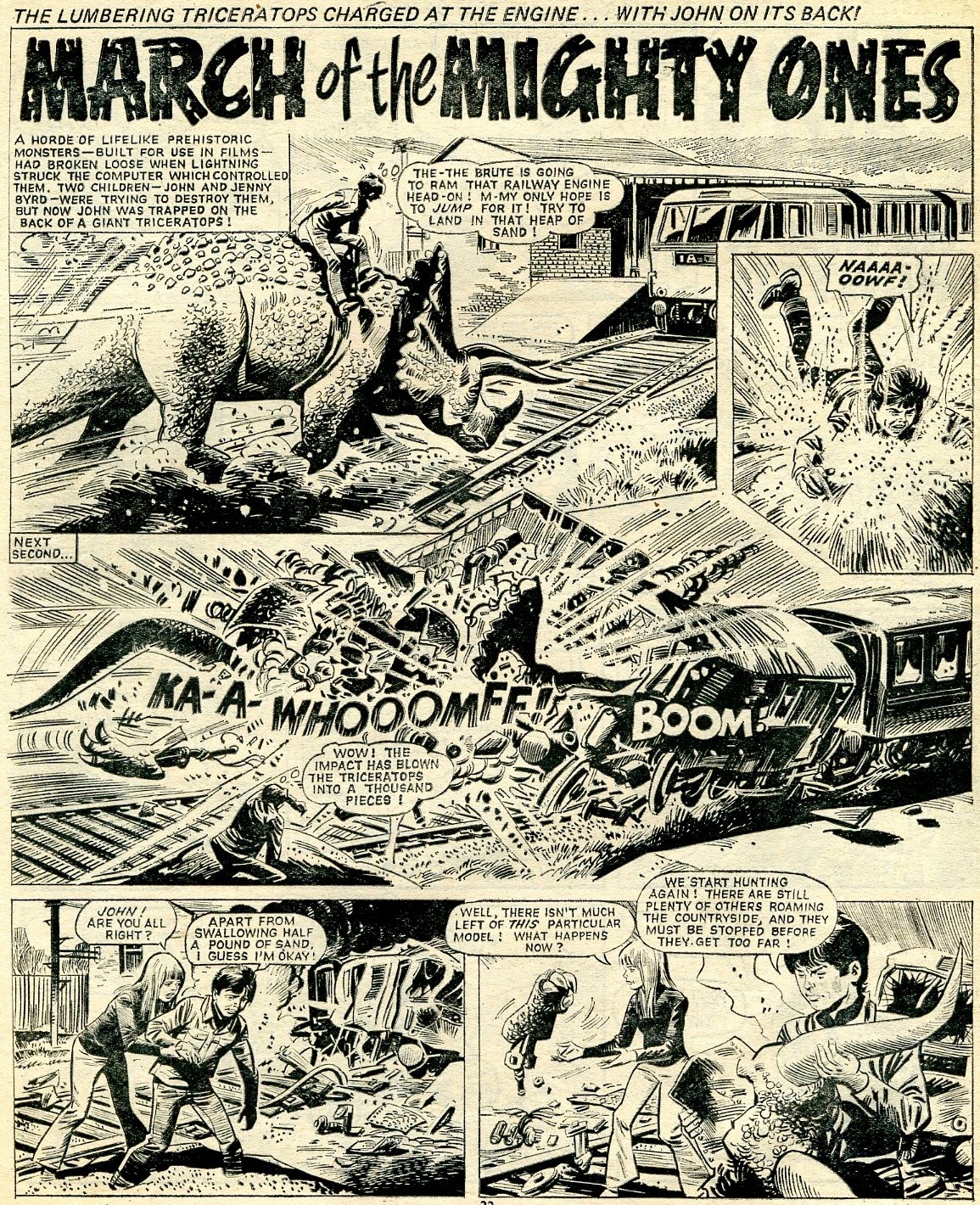 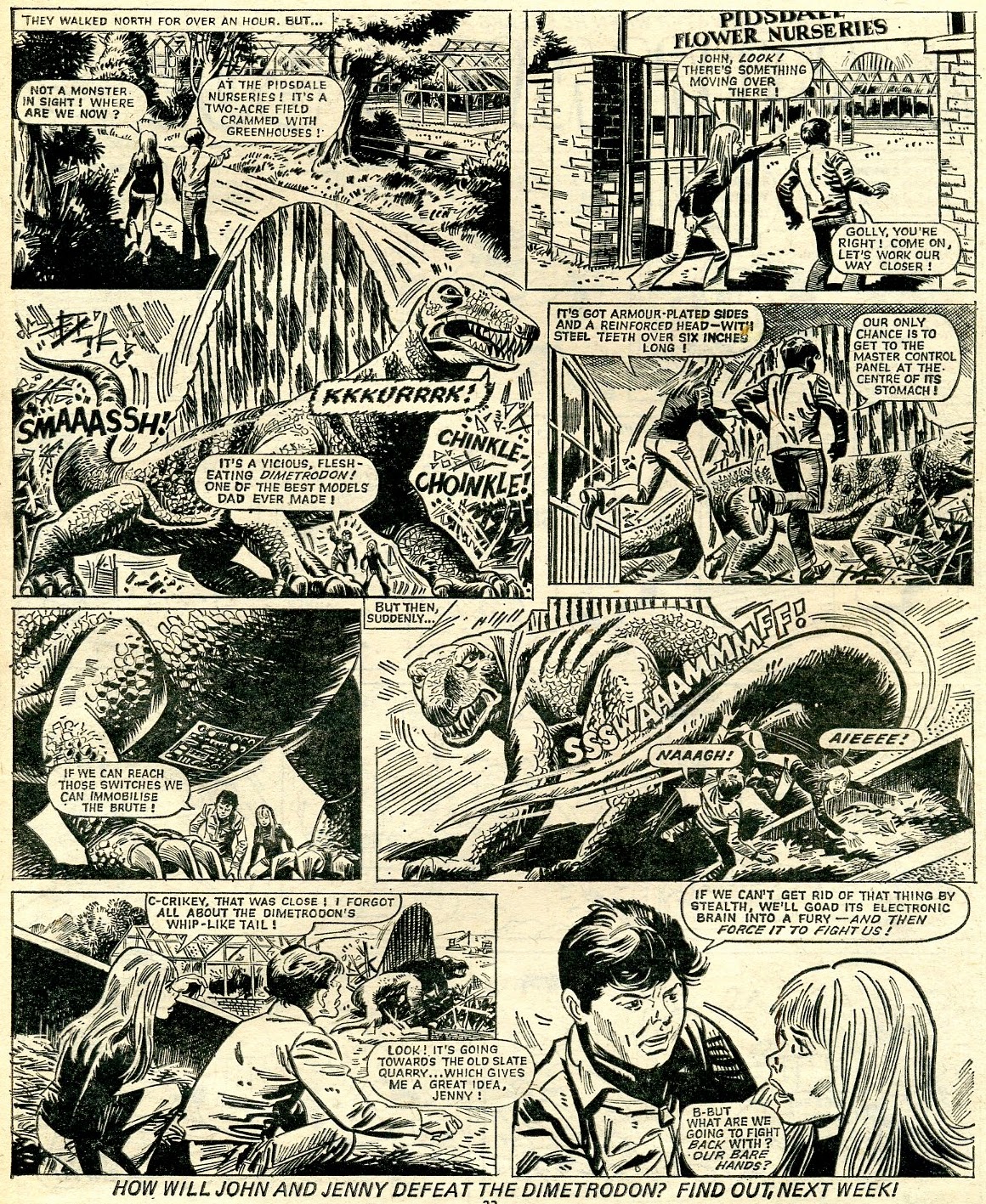 In a number of visually striking episodes fire only destroyed the outer fabric covering and exposed the steel skeleton but did not stop the haywire brute so finishing it off called for an extra effort of the Byrds.

Sometimes the episodes were comical – in issue 10 an old man whom John and Jenny saved from a nasty sabre-toothed tiger got so mad at a terrifying Megalosaurus for trampling his property that he poked it with a pitchfork and short-circuit sent it into flames; in another episode John tricked two aggressive robot cave-men into stuffing themselves silly with canned herring and then ripped their main fuses out. Of course, things weren’t always that easy; the brave monster-busters often faced mortal danger and other drama such as separation, amnesia and even a hostage situation. It’s nice how they managed to keep their mood up celebrating important holidays: 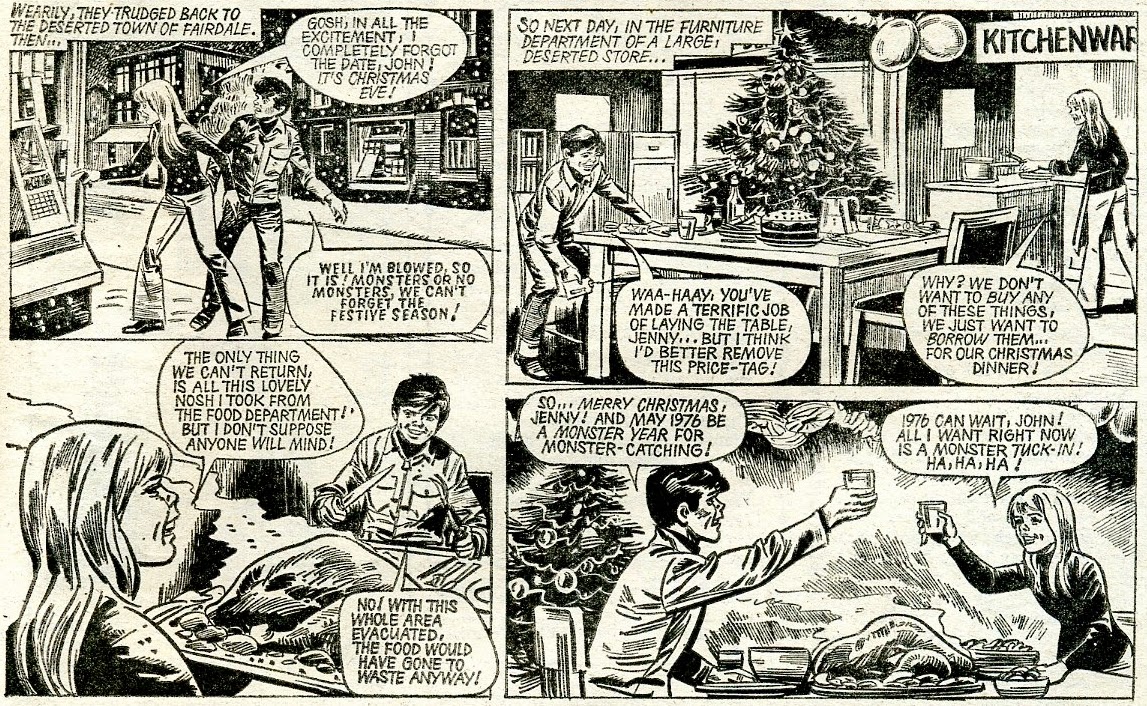 …and simply being normal kids: 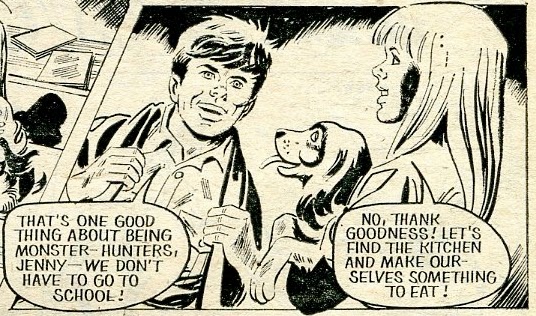 In issue 43 the young Byrds met and adopted Lonely – a dog that became a full-fledged member of their monster-hunting team: 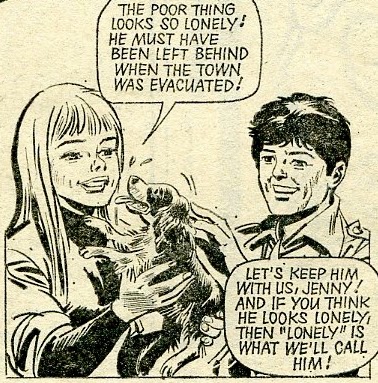 The scene of the weekly episodes was set in different eerie settings often seen in horror movies (deserted town, empty amusement park, old quarry, desolate movie theatre, disused colliery shaft, toy factory warehouse, abandoned stately home with a private maze, empty posh school, etc.).  The writer of March of the Mighty Ones also had a soft spot for vintage vehicles and machinery – whenever the kids needed to drive somewhere, they could be trusted to pick a vintage car, and in No. 31 they even borrowed a World War I tank from the local weapons museum and drove it against Cetiosaurus – the biggest dinosaur of them all. 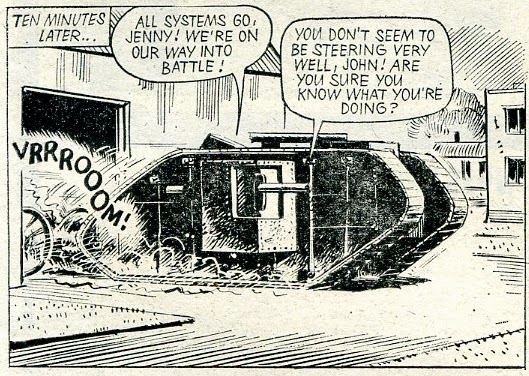 The last cliff-hanger frame of the episode in issue 71 (Oh, no! I – I simply can’t believe it! Surely not… It can’t be! – screams John upon seeing something we can’t see) kept readers in suspense for two weeks because March of the Mighty Ones missed the penultimate issue of MFC (No. 72 – the only issue without the story). The story ended with this whopping 4-page set in the last edition. The young monster hunters look as good as doomed as they face a horde of the last remaining 5o of Dad’s fake monster army led by a huge Tyrannosaurus: 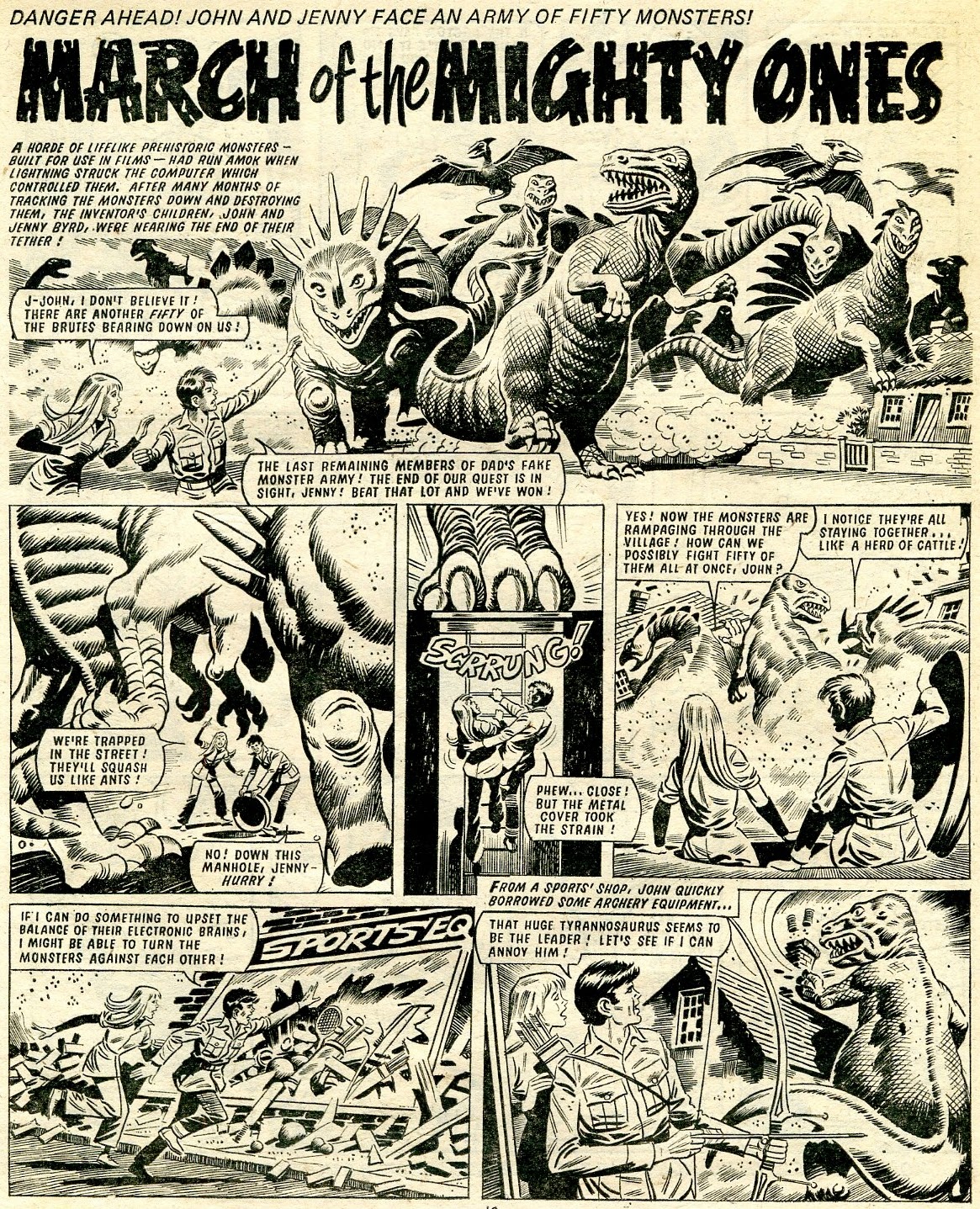 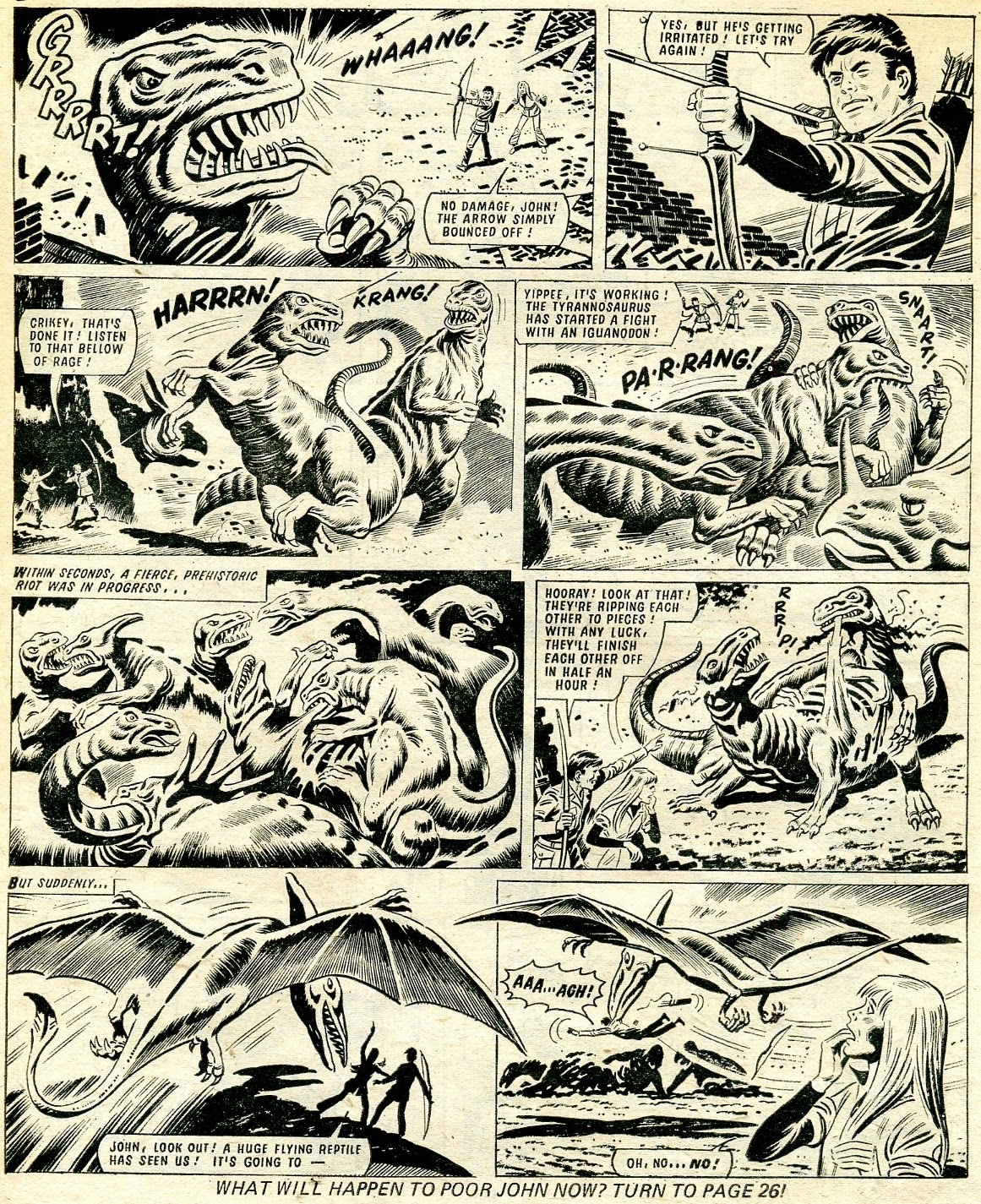 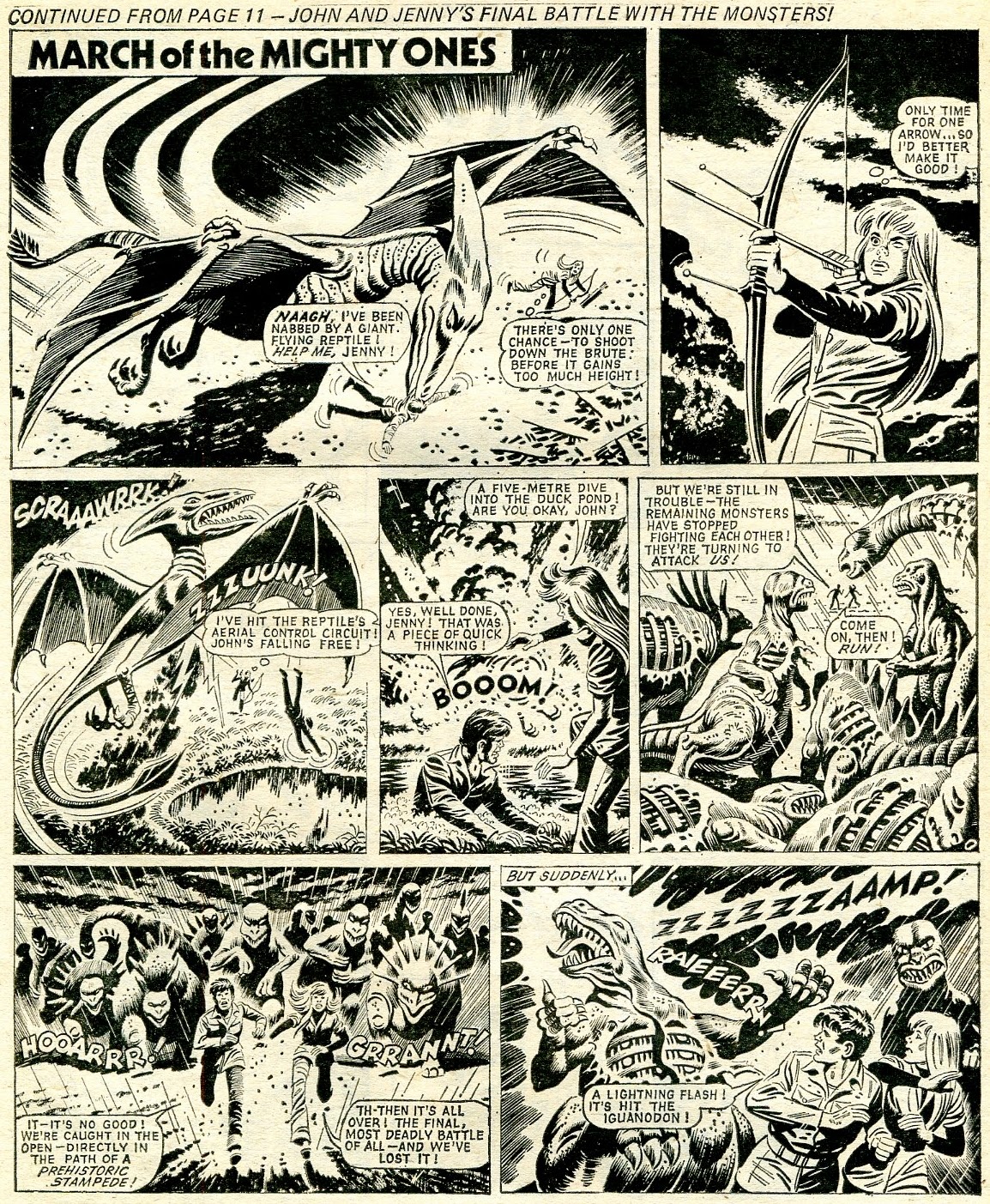 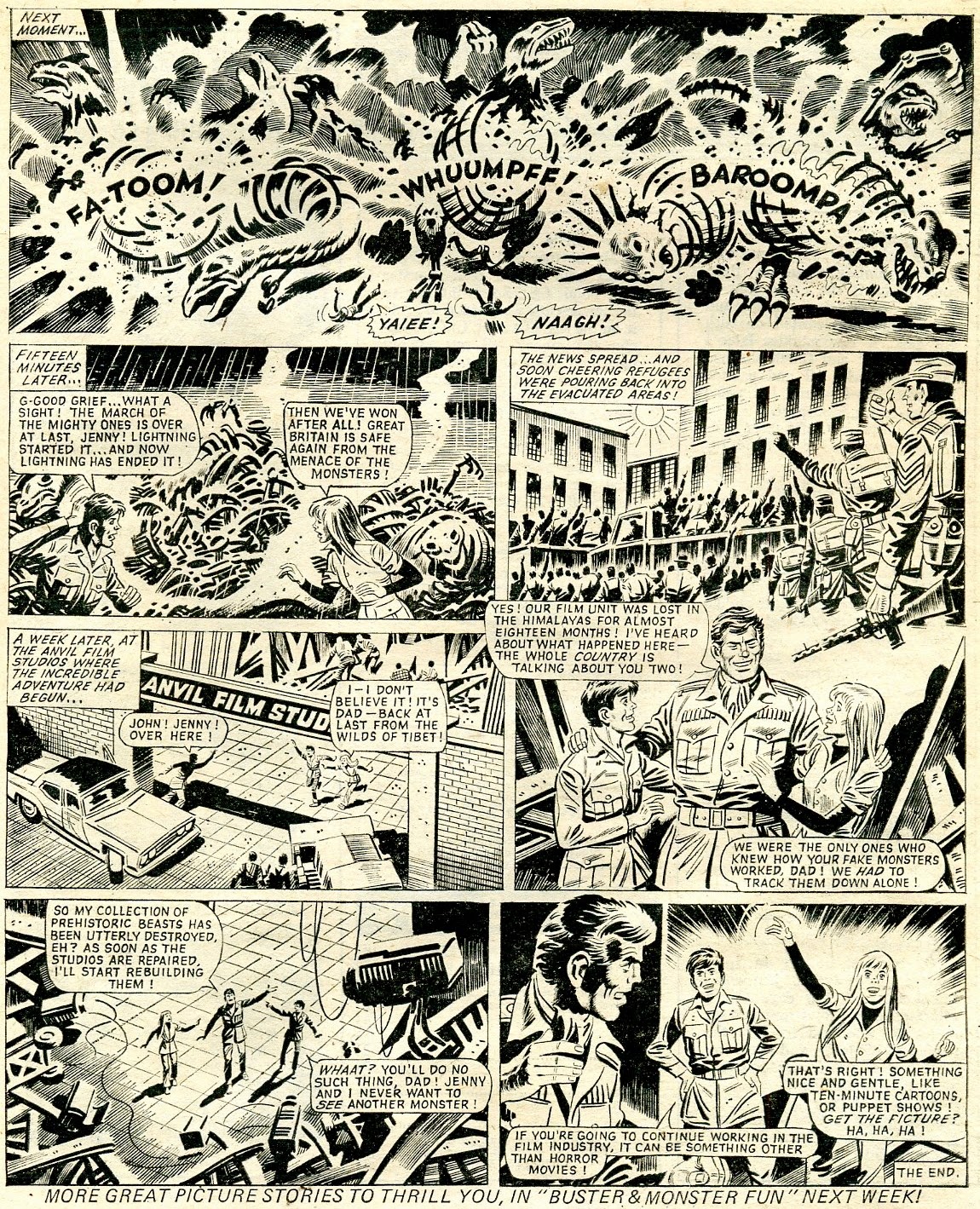 As can be seen from the last episodes, a change of the illustrator had taken place. The main artist was Mike White who drew March of the Mighty Ones from the first issue. Starting from the episode in MFC No. 63, Ron Turner took over and continued drawing the feature till the very end.

The idea of March of the Mighty Ones lent itself perfectly to powerful visualisation and the excellent execution by two top-rate artists made it an attractive and readable series. I find it a bit surprising it was not transferred to Buster and Monster Fun because I think it had potential for a long and successful run. 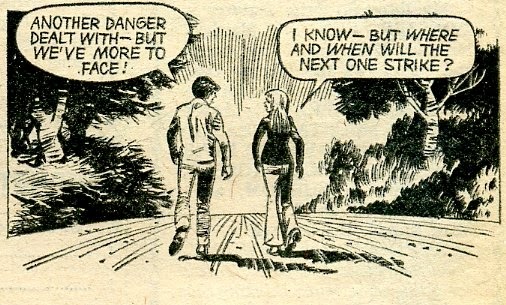