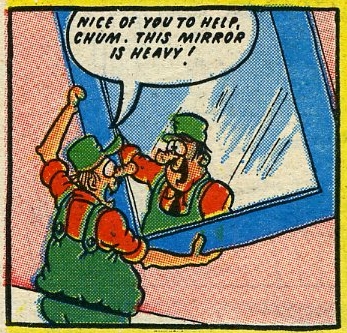 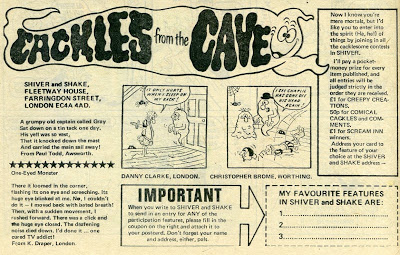 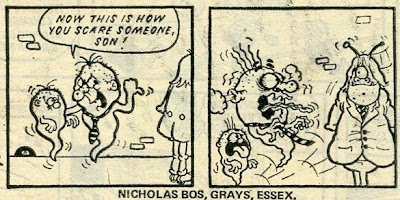 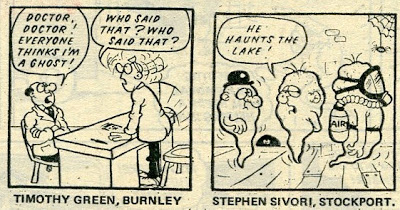 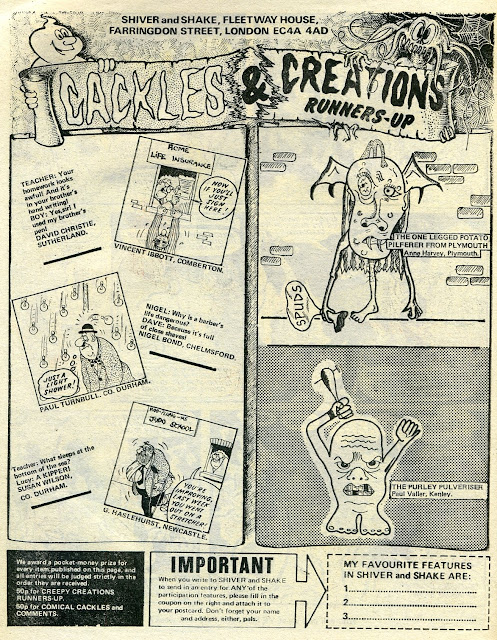 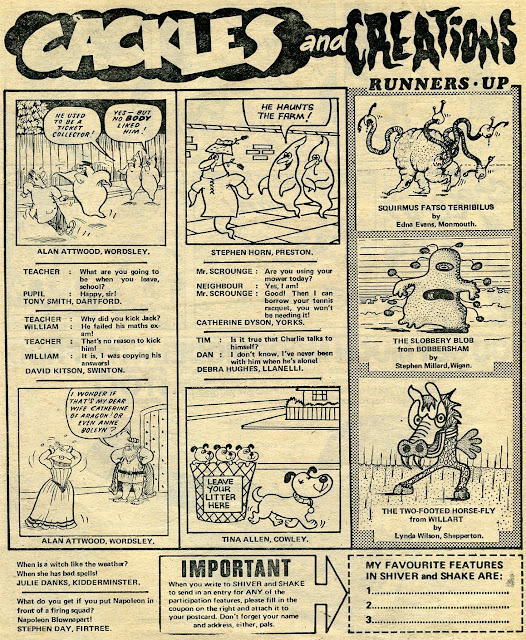 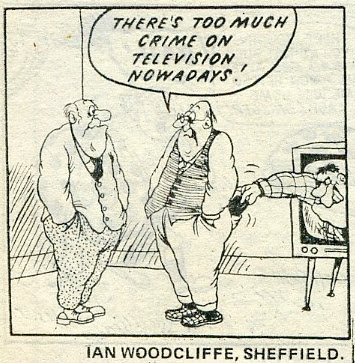 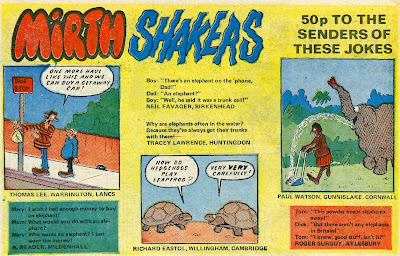 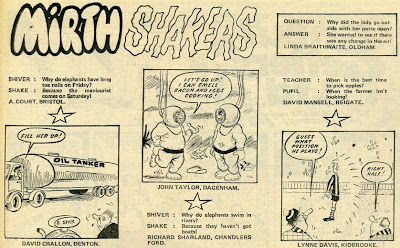 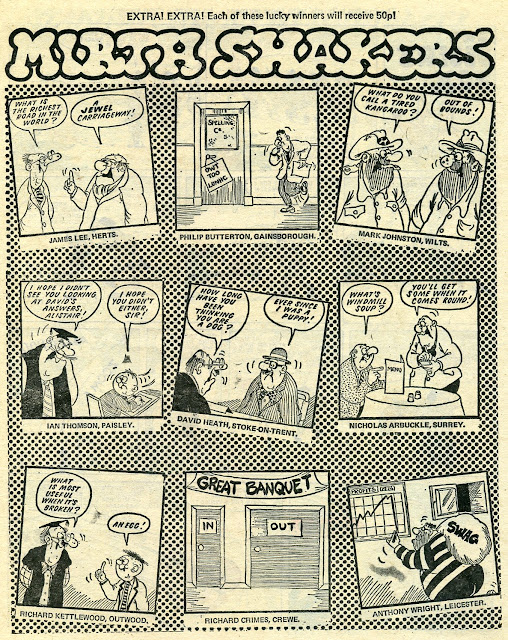 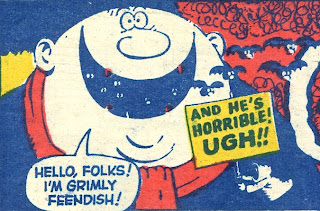 Grimly Feendish was the fourth strip that started in SHIVER AND SHAKE No. 22 and the third of the paper’s features (after Frankie Stein and Ghouldilocks) that had originated years ago in another comic. Grimly had enjoyed a long and spectacular career in crime, first as a character of the long-running strip Eagle Eye Junior Spy in WHAM! and later as the star of a strip named after him in SMASH! , so before looking at the run of shiver and shake it is appropriate to mention a few things about his background.


Grimly Feendish was Leo Baxendale’s creation for WHAM! comic. In his book a very funny business Mr. Baxendale admits that the character came out looking ‘vaguely like the uncle in the Chas Addams family’, but in fact the likeness was way more than vague.

In Eagle Eye Junior Spy Grimly Feendish was an ambitious criminal mastermind whose aim was to conquer the World. The infamous arch-villain fought a relentless war with the young MI 5 ½ agent Eagle Eye who was forever foiling his evil plots. Eagle Eye Junior Spy’s Grimly Feendish first appeared in the first issue of WHAM! and was last seen in the penultimate edition of the paper (No. 186 dated 13th Jan., 1968).

Interestingly, less than two years before that he got his own weekly strip in another Power Comic SMASH! Although the Grimly of SMASH! still had his crowd of squelchy things and weirdies familiar to readers of WHAM!, his criminal ambitions had shrunk considerably and become limited to stealing and robbing. Crimes of this category fell outside the competence of intelligence services but being ‘the rottenest crook in the world’, Grimly made new enemies in the shape of the police. Grimly Feendish ran in SMASH! issues No. 1 – 162 (Feb. 5th, 1966 – 8th March, 1969 (last pre-revamp issue)) and then disappeared from the radar for nearly four years before re-surfacing in SHIVER AND SHAKE No. 22.

The Grimly of SHIVER AND SHAKE was the thieving and robbing version from SMASH!, rather than the villainous mastermind with World-domination ambitions from WHAM! The shiver and shake run of Grimly Feendish started with eleven reprints from SMASH! I pinned down the particular issues of SMASH! in which the episodes originally appeared; here is the list for those who care:

Check out an example of a SMASH! original and a SHIVER AND SHAKE reprint side-by-side: 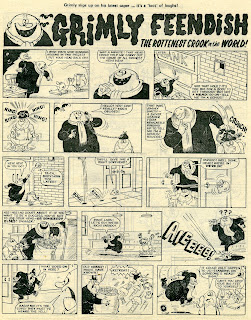 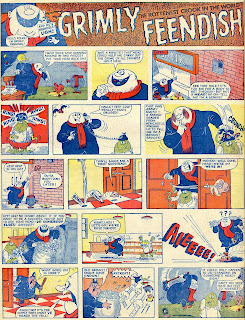 In Shiver and Shake Grimly Feendish picked up where he had left off in SMASH! and continued with daring crime schemes, assisted by Squelch and company. Although his life’s ambition was to rob the Bank of England, it was not uncommon to see Grimly raid a candy store or swinde old folks out of their pensions. In issue 24 Grimly Feendish appeared in The Shiver Givers strip and hit a new low by lifting a rubber from Frankie Stein and a type-writer from Shiver: 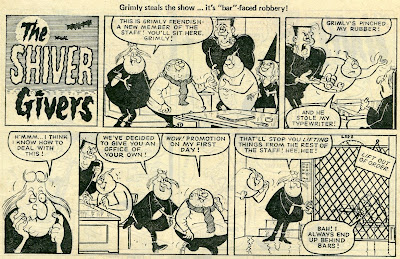 From issue 34 until the end of the run illustrator’s duties were given to the young Tom Paterson who was just starting his career in comics. I may be mistaken, but Grimly Feendish was probably his first regular strip and Tom’s style is hardly recognisable at that stage. Check out the examples below and see how his style evolved into something more familiar as weeks went by. He even signed a couple of episodes towards the end of the run (in Shiver and Shake issues 73 and 77):

Trivia buffs will be delighted to know that Tom Paterson’s trademark striped upright sock was first seen on the side of the turret of Grimly’s tank in Grimly Feendish episode in SHIVER AND SHAKE No. 49:

Grimly Feendish started in SHIVER AND SHAKE issue No. 22 and continued until issue No. 77 missing three weeks inbetween (issue Nos. 63, 72, 76). The episodes in issues 22 to 33 were reprints from SMASH!, as was the episode in issue 39 (illustrated by Terry Bave I believe). The episodes in issues 34 to 77 were by Tom Paterson who drew in his early rough style. The strip was part of SHIVER section of the paper. Grimly Feendish got his own mini pin-up in Frankie Stein mini pull-out comic in SHIVER AND SHAKE issue 54: 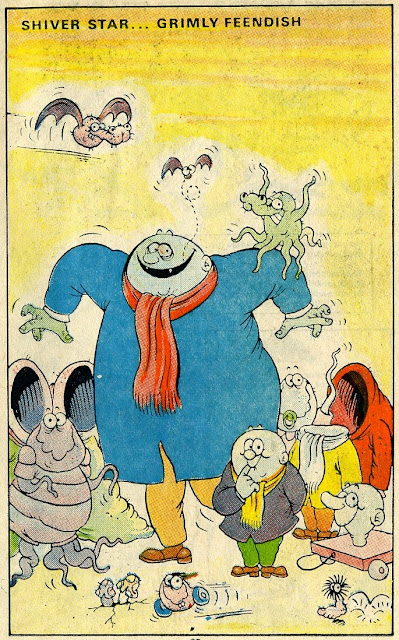 Grimly Feendish didn’t survive merger with WHOOPEE!, so SHIVER AND SHAKE saw the sad end of his long and dramatic criminal career from the mastermind of the underworld to a petty thief. The strip was included as an entrant in the Pick-A-Strip feature in Whoopee! and Shiver & Shake where it competed against 7 other strips but readers gave their support to SweenyToddler. The good thing is that he continued in SHIVER AND SHAKE annuals and holiday specials for quite a while and if you are a Grimly buff, you may very well might find it worth while checking the Grimly Feendish label in the column on the right for full details.

Afterwards Grimly was seen just one more time in ALBION series published by Wildstorm in 2005.

Grimly Feendish must have been fondly remembered by many, including members of the London rock band The Damned who named one of their singles after him in 1985. The single reached No. 21 in UK charts: