JAWS the blockbuster Hollywood movie was released in 1975. Gums the MFC strip was a clever and funny tie-in with the film and started in MFC No. 35 (7th February, 1976). Check out the famous poster of the movie and the advertisement of Gums in MFC issue No. 34 (the week before its premiere) side-by-side: 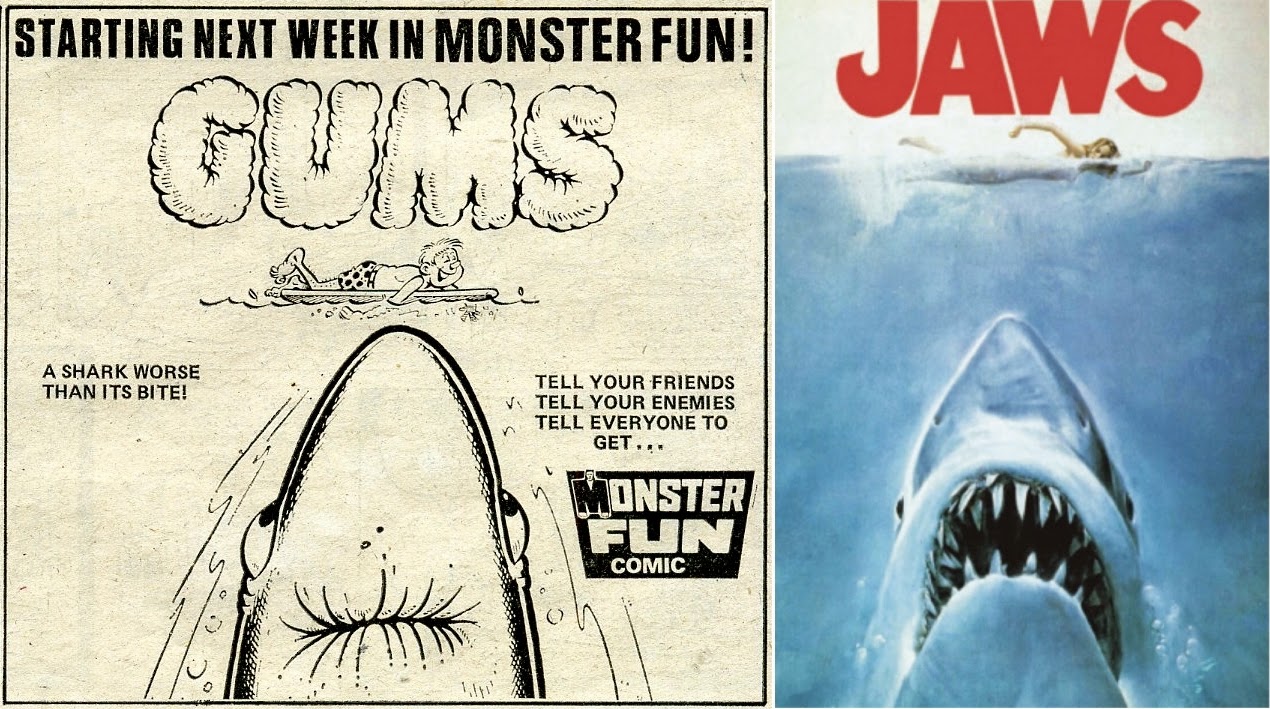 The scene was set on the sunny coast of Australia. The strip was about a toothless shark with a set of false choppers and the young Bluey who lived in a coastal town which the beast chose to terrorize. The shark was a dangerous and aggressive predator. The only way to render him harmless was by removing his false teeth – the mission which Bluey took upon himself. That’s the basic idea of this highly successful and long-running IPC strip which originated in MONSTER FUN COMIC.

The early stories were serialized and often spanned a period of two weeks; in the first week Gums usually lost his choppers: 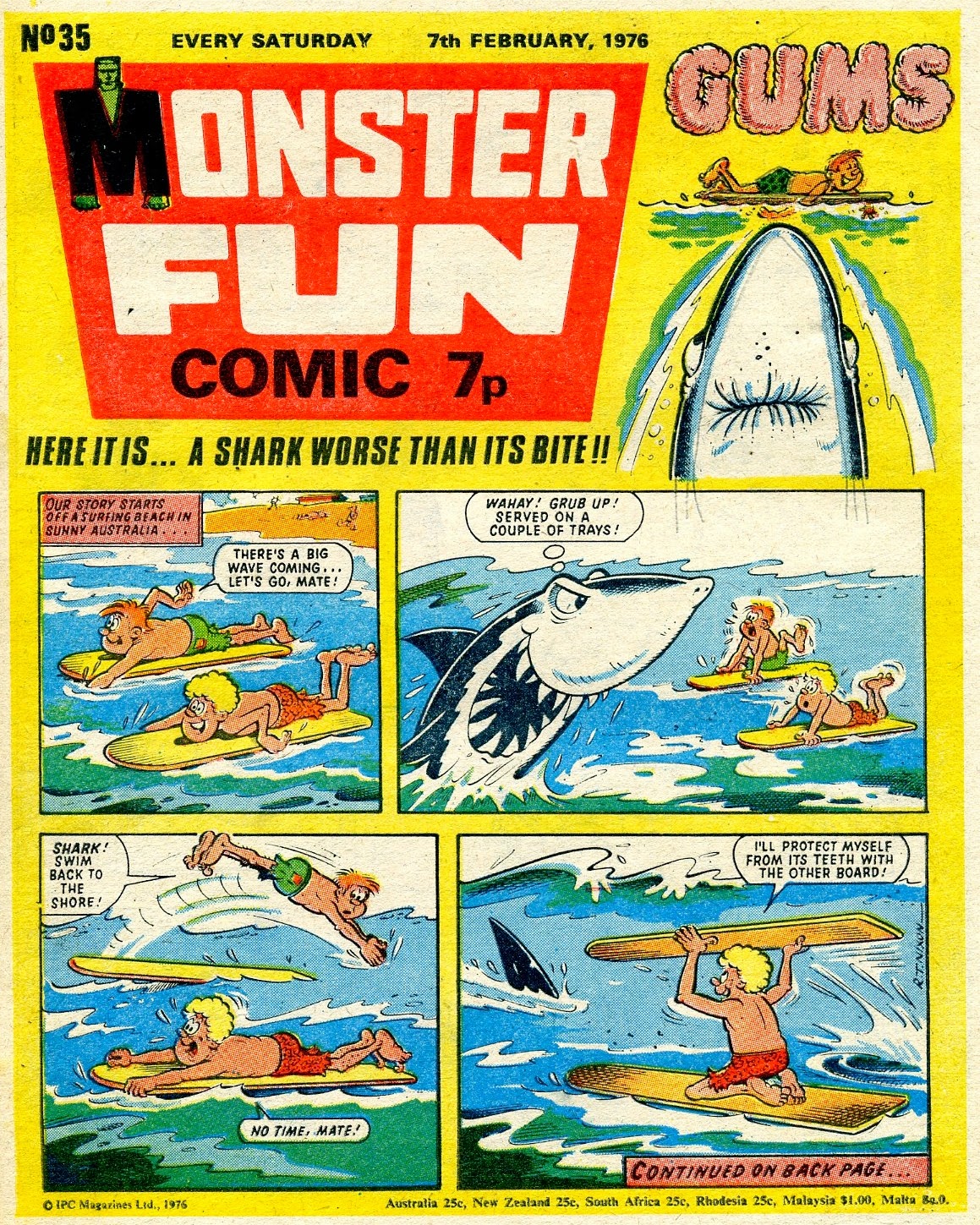 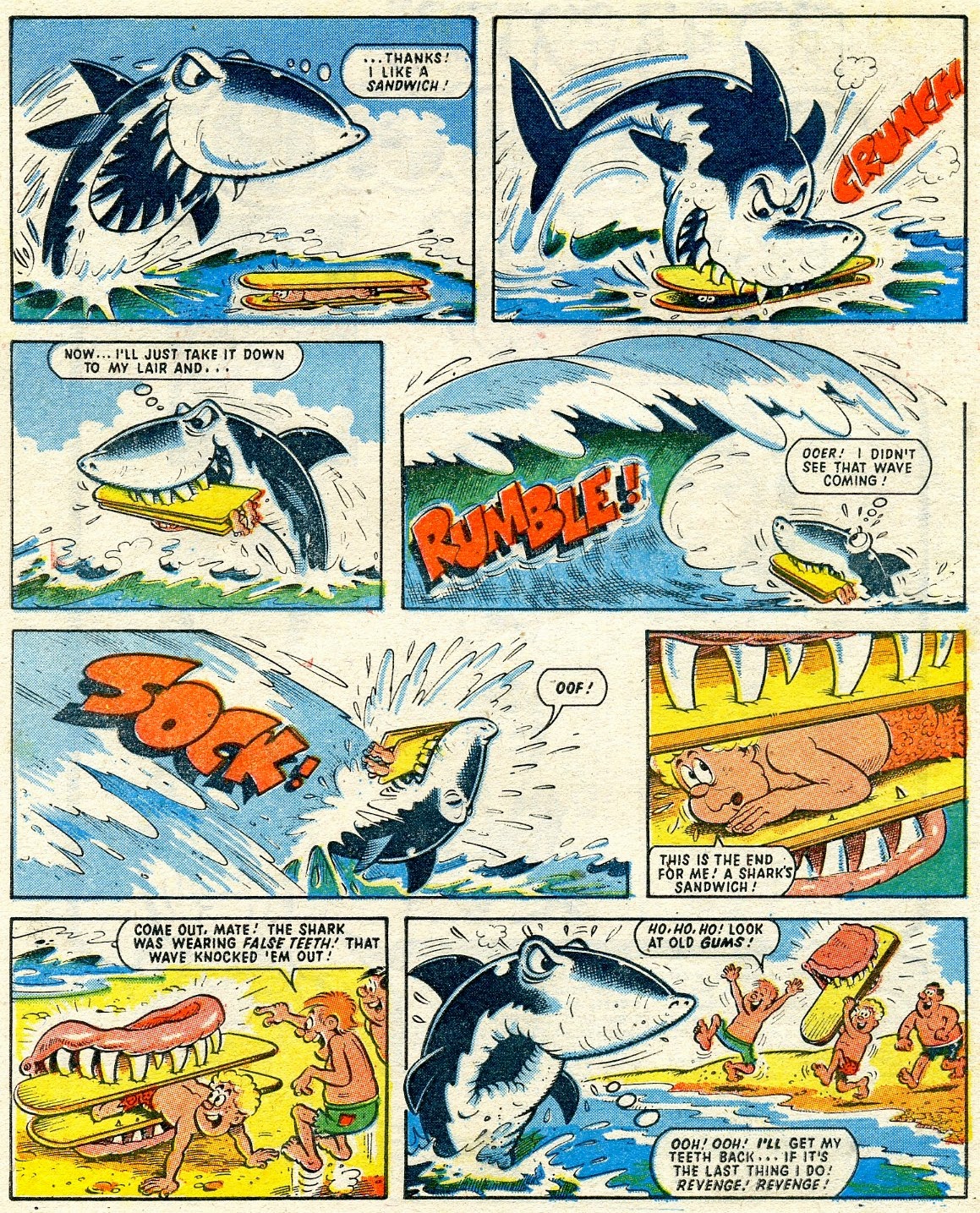 …and won them back a week later, thanks to his own cunning and smartness, or through sheer luck or coincidence: 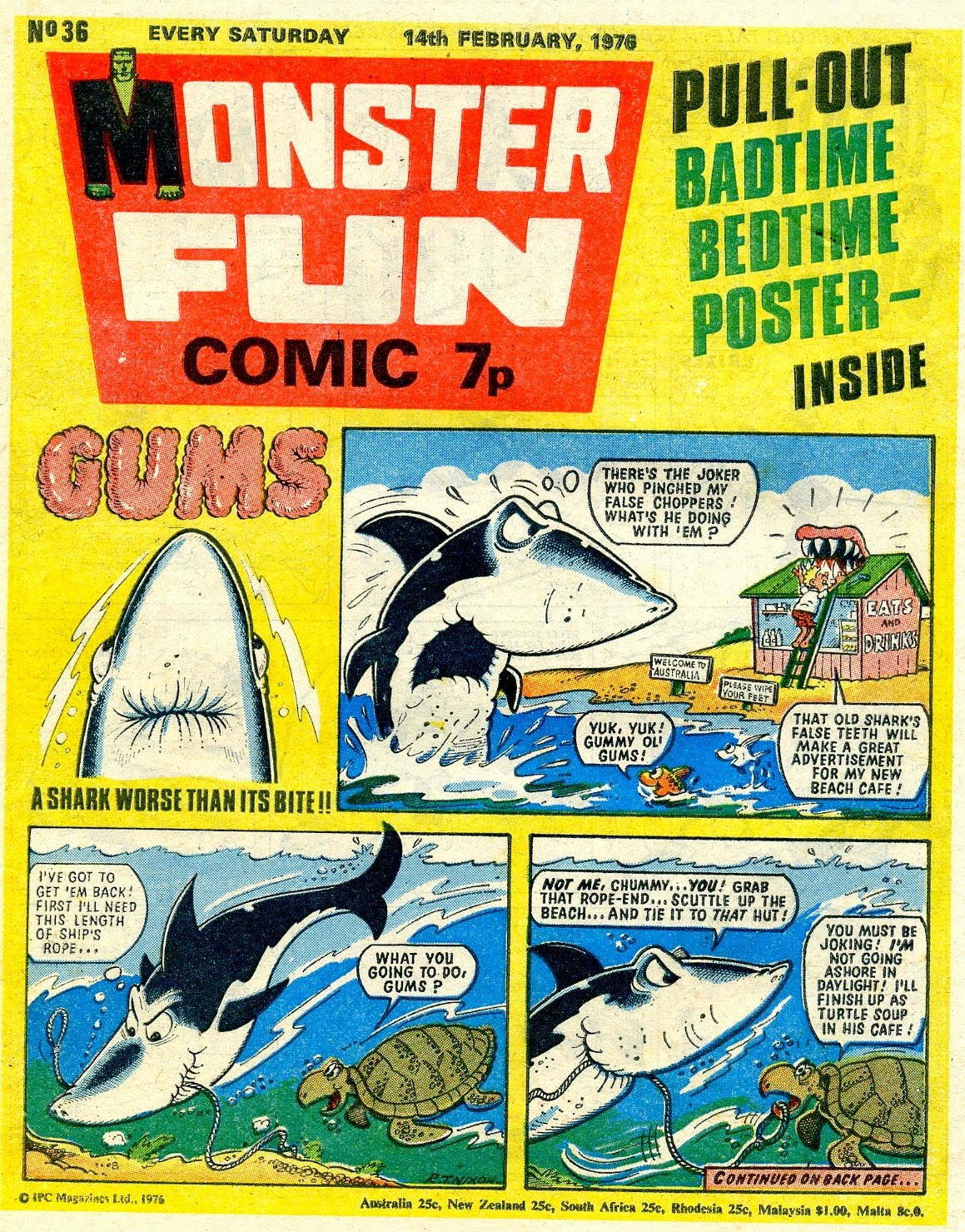 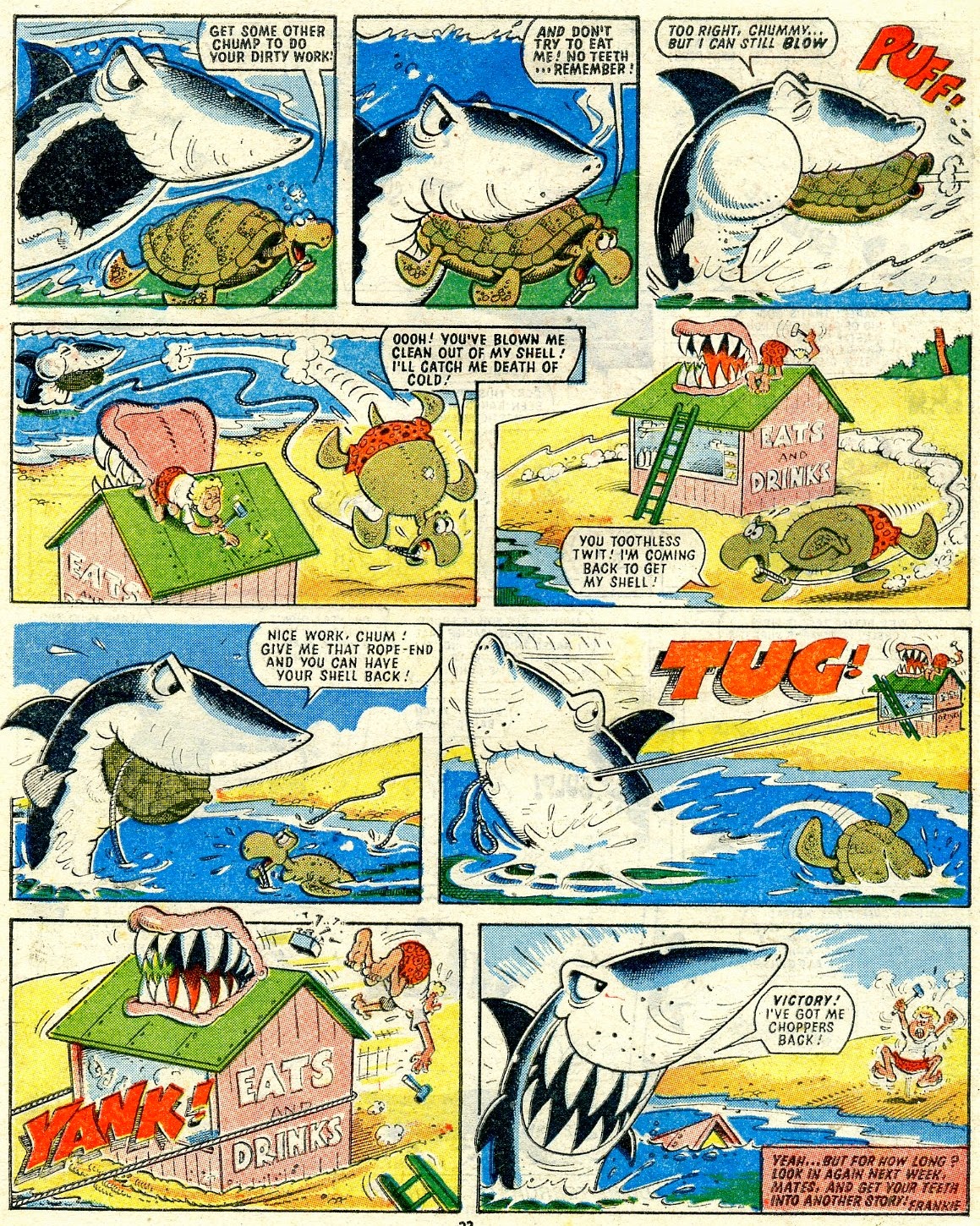 Bluey prevailed in the majority of the episodes but sometimes the shark got the upper hand. Typically, this involved the use of munition from sunken ships: 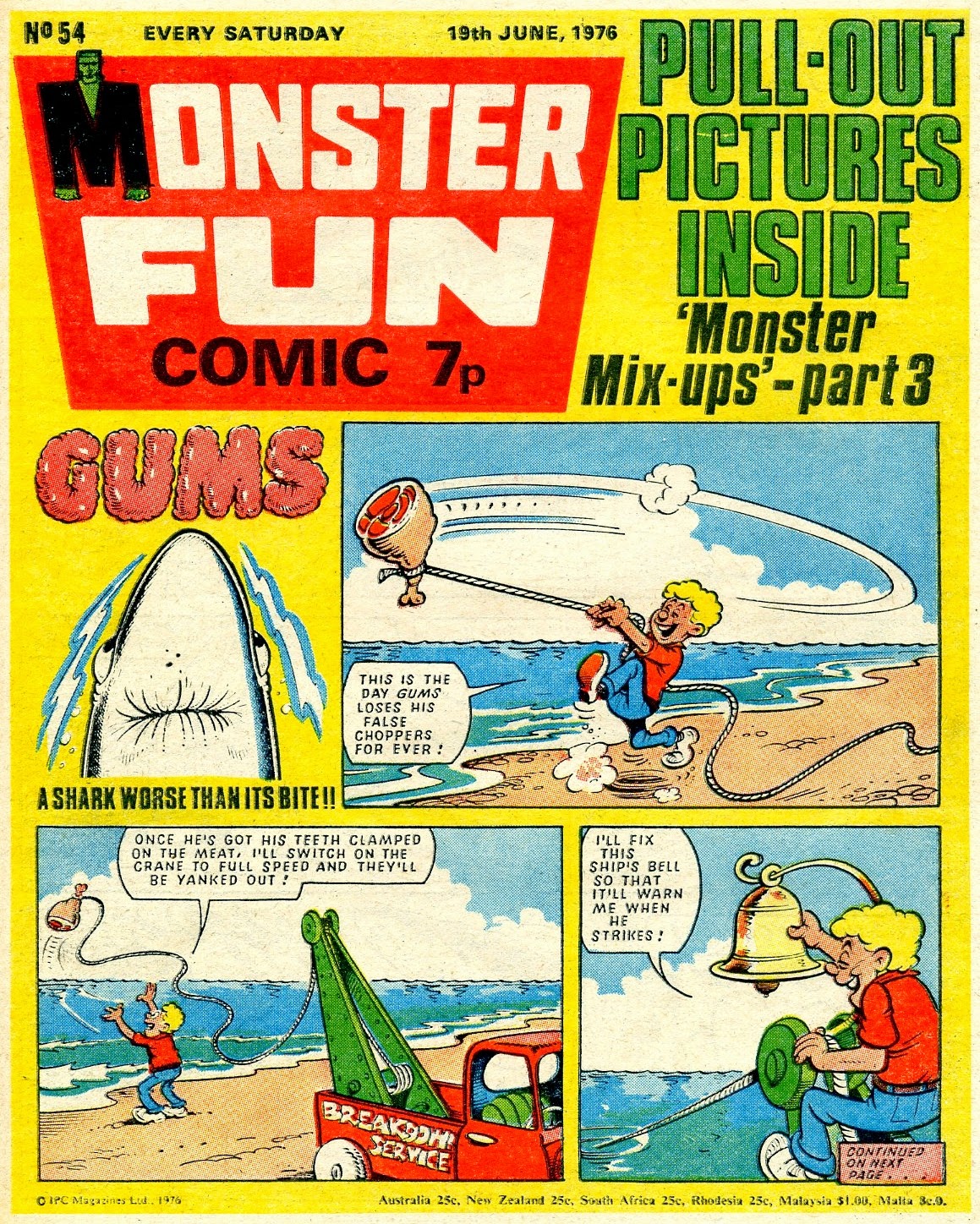 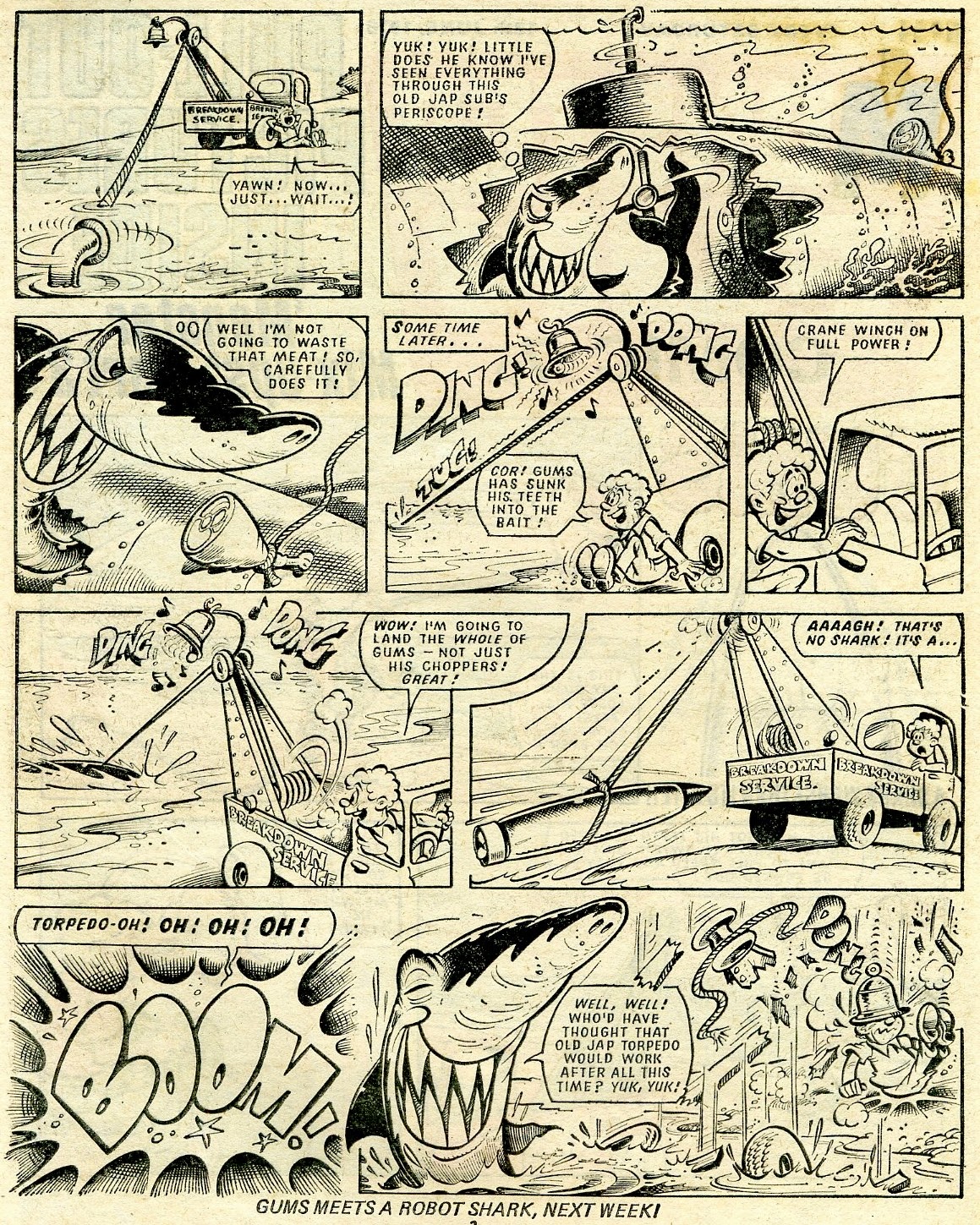 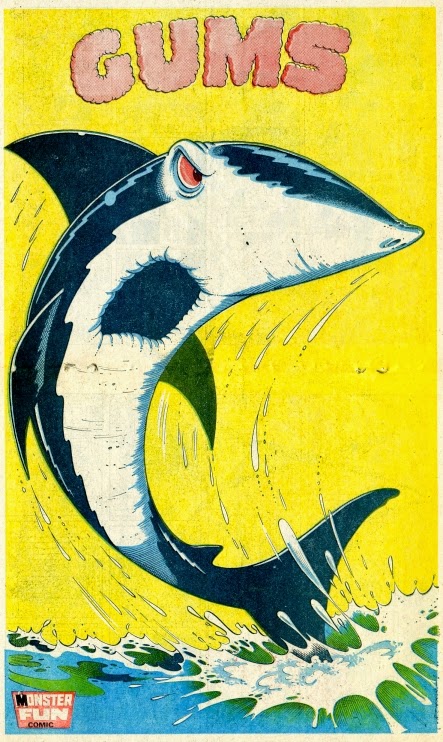 Initially the illustrator was Bob Nixon who, according to his own words in the interview for GOLDEN FUN, also designed Gums to the idea suggested by the editor. Mr. Nixon continued to draw the strip until issue 59 when Alf Saporito took over from him on a permanent basis (Alf Saporito’s first episode of Gums was in MFC issue No. 52). It is interesting to note that Mr. Saporito signed a few of the early sets: 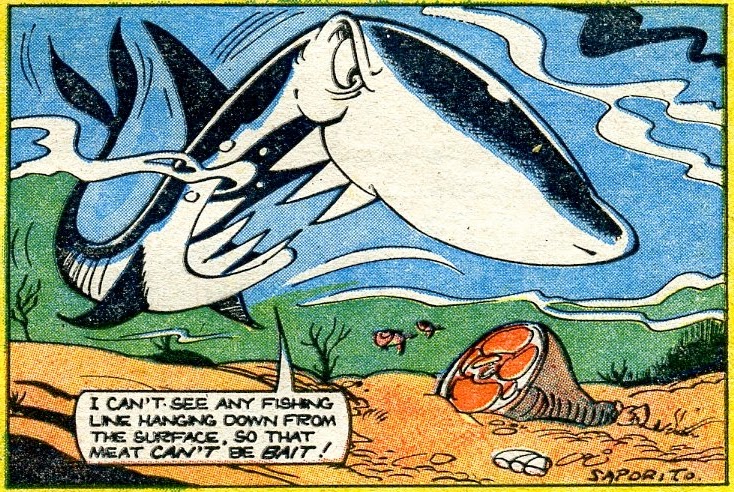 Alf Saporito remained in charge of the strip in BUSTER for the rest of the seventies and during the early eighties when he was succeeded by John Geering.

The episode of in MFC No. 71 was illustrated and signed by Les Barton: 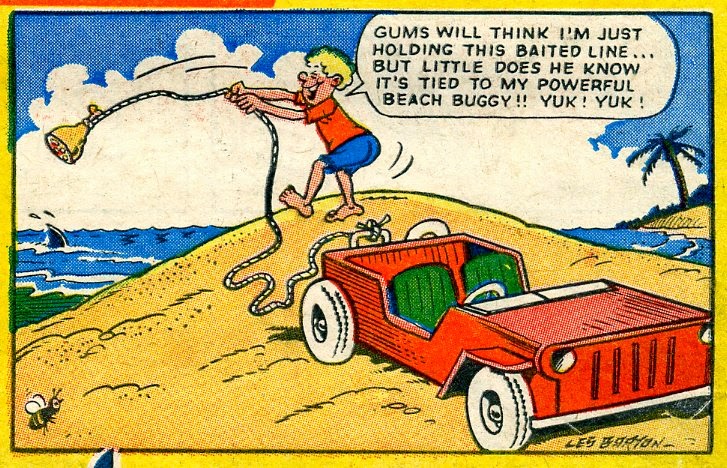 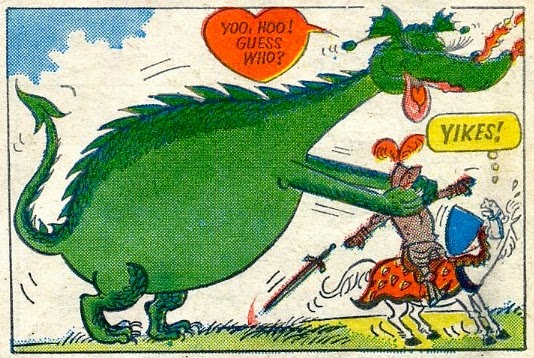 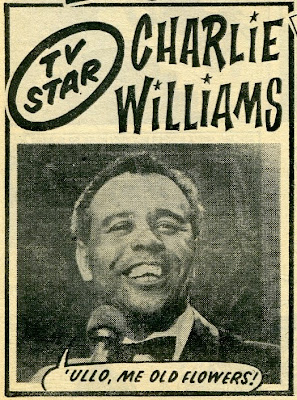 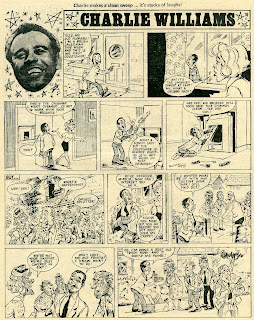 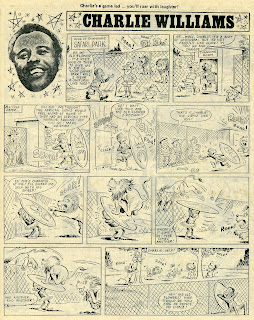 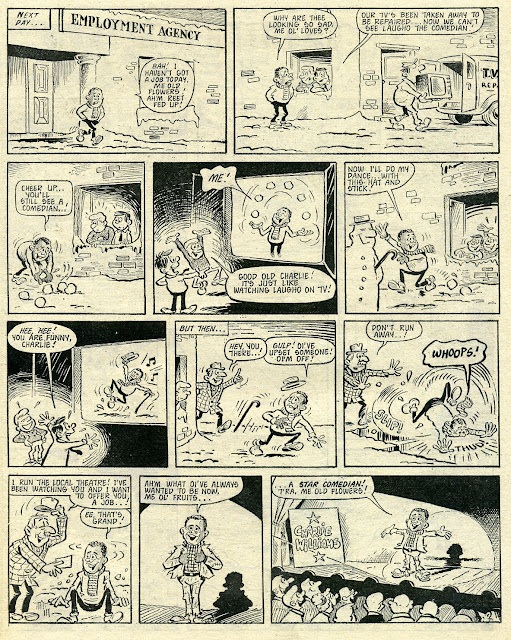 Gus Gorilla was COR!! mascot and cover star. He had his own strip named after him that occupied the front page and was in full colour for nearly three years until it was moved to the inside of the paper and turned monochrome. Gus’ weekly antics were followed by a bloke who always showed up out of nowhere in the last panel only to say that you can't make a monkey out of Gus. In the beginning of his career Gus wasn’t a character of many words. In quite a few early episodes he didn’t utter a single word. In fact, there were several covers with hardly any speech balloons at all. Unlike the majority of characters in children’s humour comics Gus rarely interacted with kids. His adventures usually involved grown-ups; a pair of chaps appeared more or less regularly, one was short and on the fat side while the other was tall and lean. They always tried and failed to have fun at Gus’ expense

Gus’ regular artist was Alf Saporito. Some episodes were illustrated by other artists such as Mike Lacey and Sid Burgon. 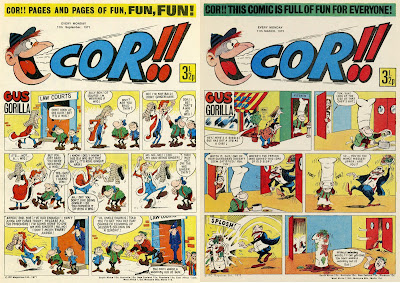 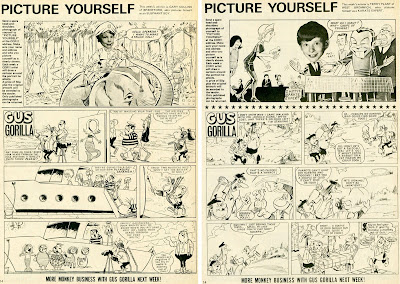 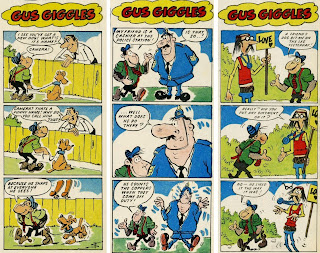 Gus starred in two other COR!! features: Gus Giggles and Gus Gags. Both ran on the front page concurrently with the Gus Gorilla strip when it was moved to the inside of the comic. Gus Giggles was a three-panel gag cartoon in the same vein as Gus Gorilla only there Gus managed without the moustached bloke and his usual punch line. It ran from 21st April, 1973 until 23rd March, 1974 (Nos. 151 – 199) and was dropped in favour of Gus Gags that appeared during a short period from 30th March, 1974 until 8th June, 1974 (Nos. 200 – 210 (the penultimate issue)). The gags (two of them every week) were drawn from reader’s ideas and contributors received one pound for each cover joke published. Gus Gags feature survived COR!!’s merger with Buster where it continued for as long as the very last issue of 1979. 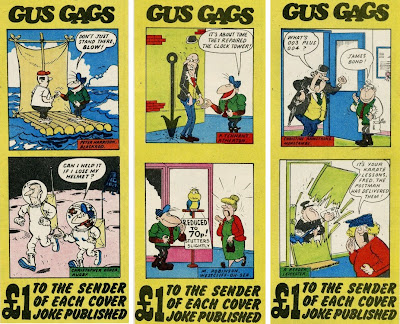