A LOOK AT SHIVER & SHAKE STRIPS: THE HAND 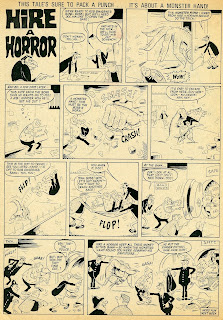 The Hand first appeared as Monster Hand in Hire A Horror strip in COR!! comic dated 27th November, 1971 (No. 78). IPC must have liked the idea because less than two years later it was developed into a weekly strip for the new SHIVER AND SHAKE.

The main character was a giant hairy left human hand with a mind of its own. Although readers could see it, the Hand was apparently invisible to its fellow strip characters. At first the Hand couldn’t decide if it wanted to go around scarring folk or helping them but eventually it became a full-time goody that always sided with the weak, the poor and the disadvantaged.


The Hand started in the first issue of SHIVER AND SHAKE and continued in SHIVER section until the very last edition, missing just two issues in between (Nos. 73 and 77). The original artist was Reg Parlett who illustrated the strip until issue 39 (except in issue 33 when it was drawn by Les Barton). 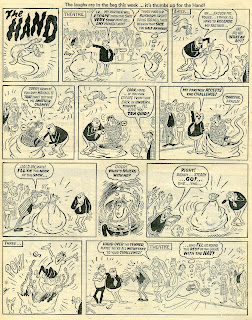 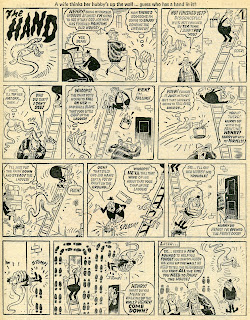 Later on other artists took over. I can recognise Frank McDiarmid in issue 49 and Tom Paterson in issues 53 and 56. The majority of the later episodes were by an artist whose name I don’t know. I would appreciate if someone could identify him for me because he illustrated at least one more strip in Shiver and Shake: 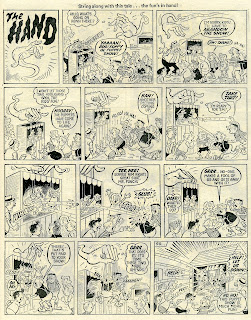 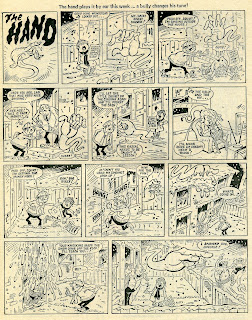 The Hand didn’t make it to WHOOPEE! but it did make two appearances in the comic: you can find the Hand in the pre-merger WHOOPEE! No. 20 where it appeared as the Star Guest from SHIVER AND SHAKE (illustrated on that occasion by Frank McDiarmid) and then in the second combined issue of WHOOPEE! AND SHIVER & SHAKE (No. 33) where it had two pages in the second part of the pull-out mini book.
Posted by Irmantas at 6:02 PM 3 comments: