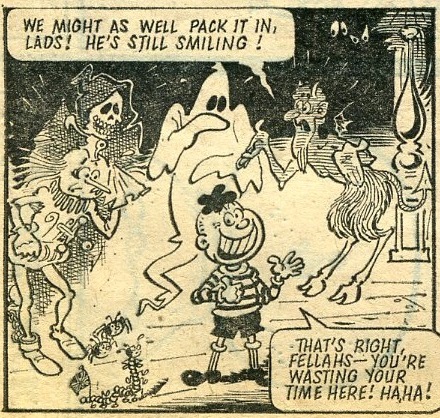 The series of guest appearances of fellow-Whoopee! characters in Scream Inn concludes with an episode featuring Smiler – the boy with a permanent smile. Drawn by Nick Baker, the character first appeared in 1976 in Whoopee! issue No. 102 (March 6, 1976) and ended in 1983 in issue No. 475 (June 25, 1983 – the last one before WHOOPEE! absorbed WOW!).

Here is the two-pager, followed by the episode of Smiler from the same issue of WHOOPEE! Note how Brian Walker credited Nick Baker in the opening panel of Scream Inn. Quite unusual, isn't it? 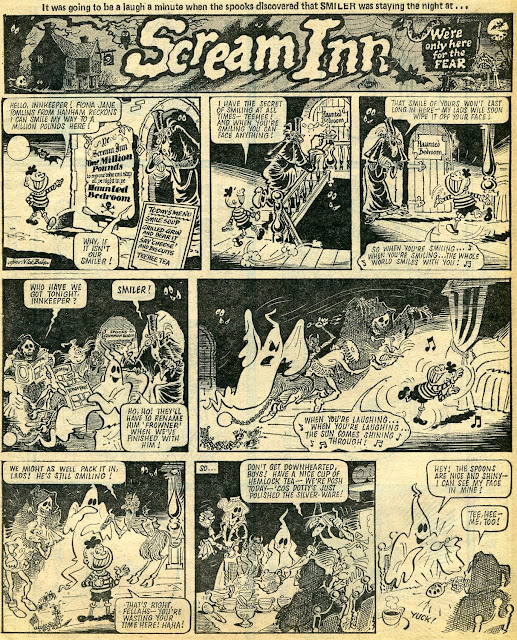 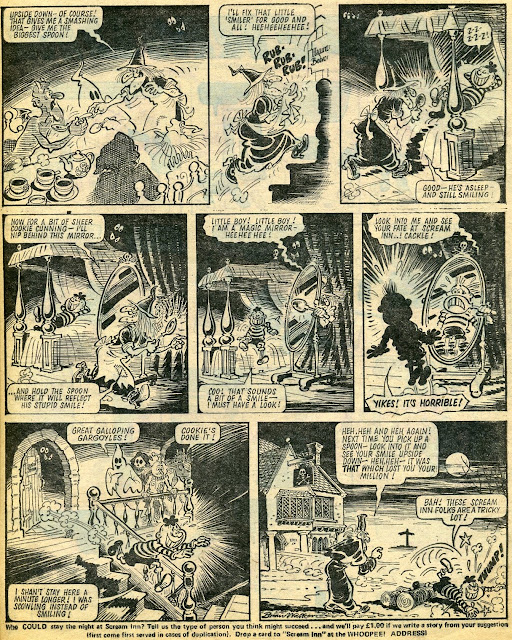 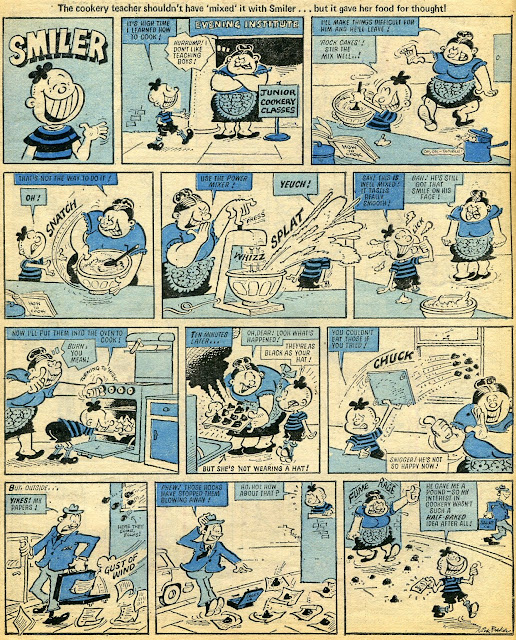 Scream Inn is a great strip and one of my favorite ones in British comics so I will surely return to it in the future…
Posted by Irmantas at 8:15 PM No comments:

A LOOK AT MONSTER FUN STRIPS: S.O.S. (SAVE OUR STAN)

The saga of Stan Stilton began in MFC issue No. 20. Agent Stan Stilton was an employee of D.R.A.I.N. – Department for Removal of All Internal Nuisances. In the opening episode the daft agent believes he has captured a criminal mastermind, only to find out that his prisoner is in fact the Number One of D.R.A.I.N. Sick and tired of Stilton who is an idiot and a constant source of trouble, Chief decides to get rid of him by sending him on a mission to capture Gruesome Gannet Gunge and his gang of grisly midgets. The elusive World Enemy No. 1 strikes first by abducting Stilton and taking him to his gang’s secret hideout in Gungitrania. The abduction occurs in the middle of a ‘job interview’ for the position of Stilton’s assistant. Moments before Gannet Gunge drives Stan Stilton away in his Gungemobile, the trouble-prone agent hires a young assistant by the name of Charlie Cheddar who proves to be somewhat smarter and luckier than his boss...

This was the beginning of the 20-weeks long action-packed series of hairbreadth escapes and last-minute rescues for Stan Stilton as he repeatedly got in and out of Gannet Gunge’s clutches with the help of Charlie Cheddar and some other very strange aides. The plot developed at breakneck speed, in defiance of the laws of physics and logic, and was often jazzed up with Monty Python–like absurdity and mad intermissions which made S.O.S (Save Our Stan) stand out amongst traditional MFC strips. 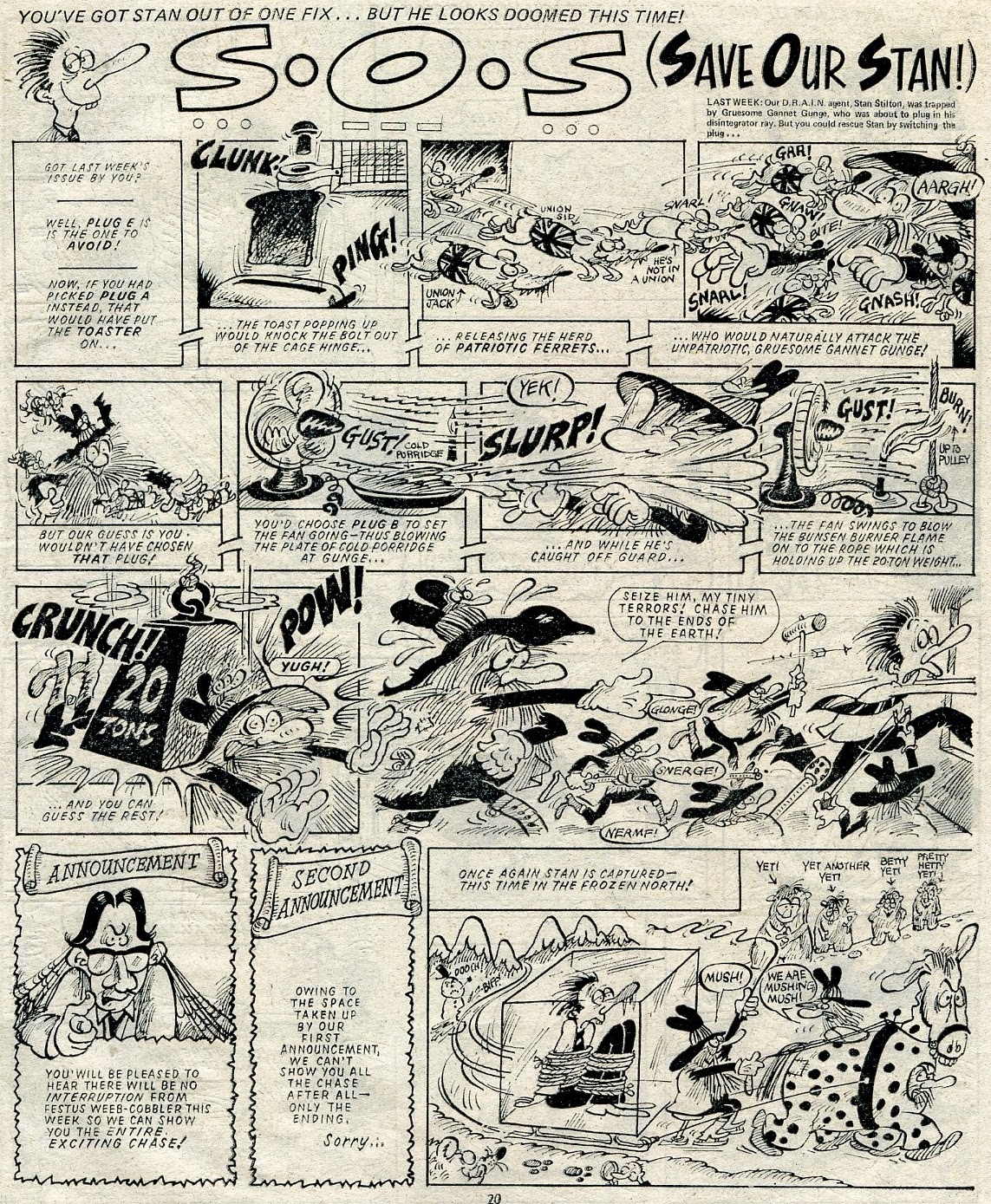 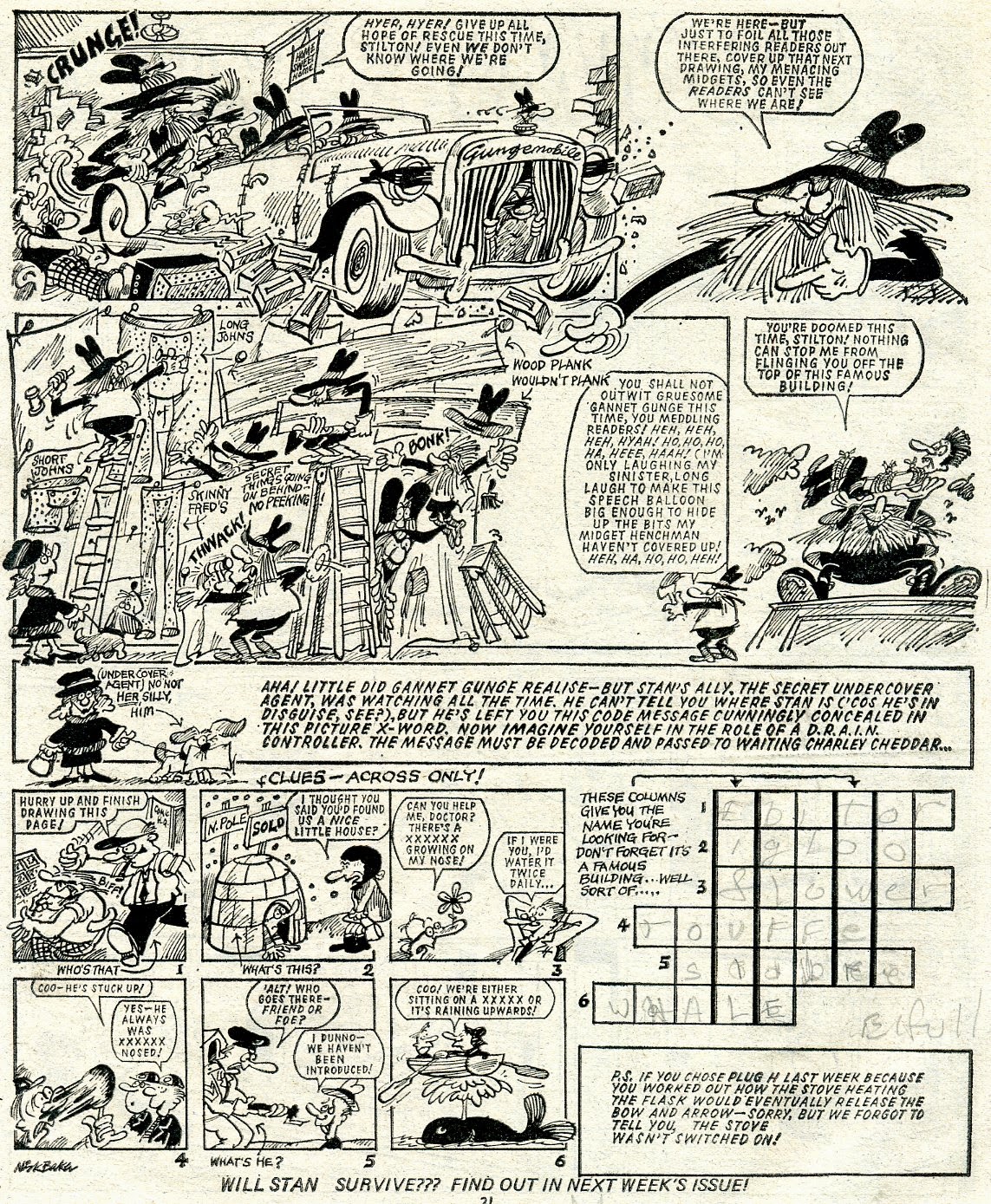 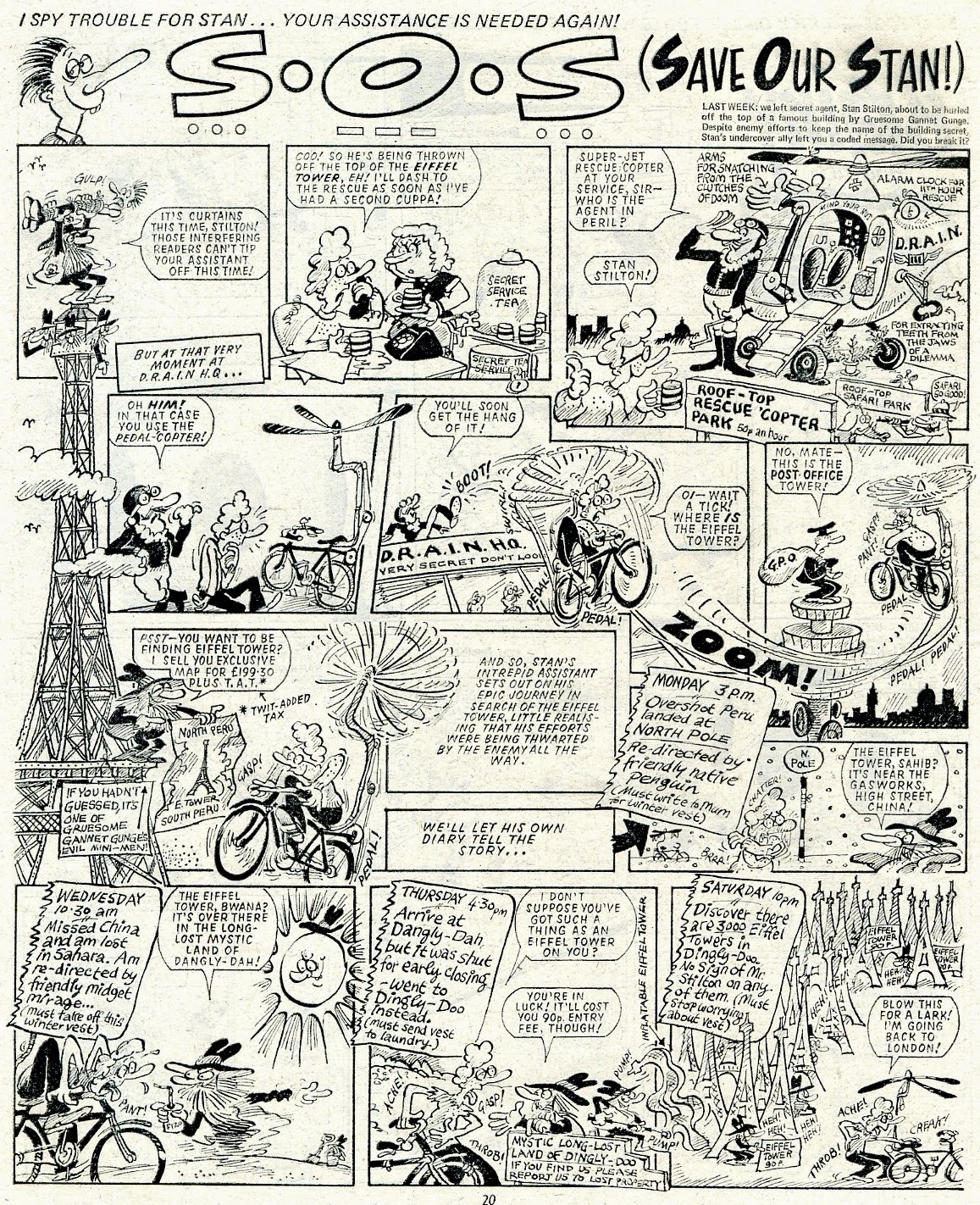 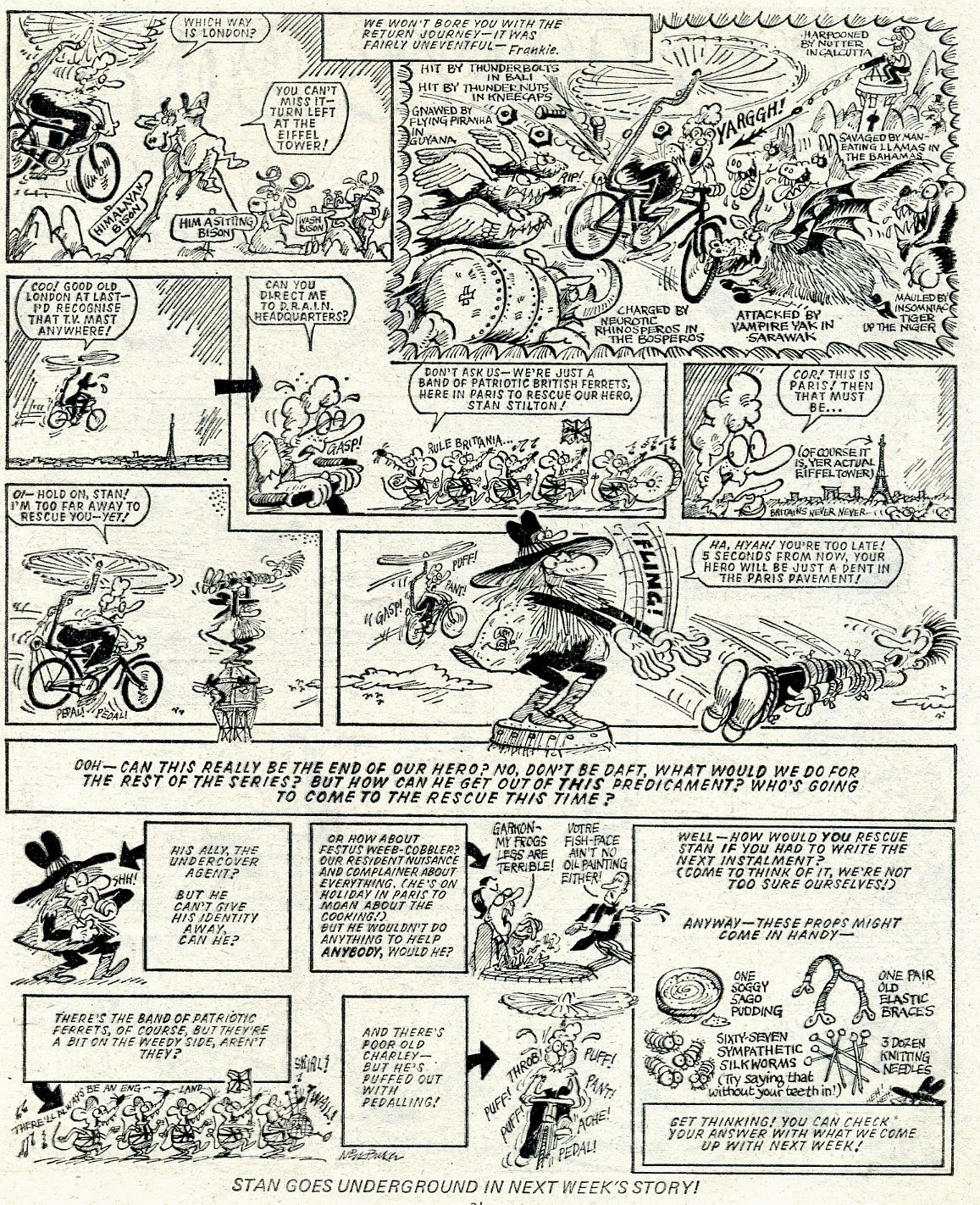 Both opposing parties had friends and aides: Gannet Gunge and his midget menacing minions had Gunge’s Mumsy, Jorkins the torturer both of whom lived in Grisly Grange – the ancestral home of the Gunges, and a pack of Gungitranian monsters (croco-dorkles, the dreaded Boogly Woogie and others), while Stan Stilton and Charlie Cheddar had the undercover ally who was a master of disguise, the intrepid messenger parrot, a herd of patriotic British ferrets and last but not least – the readers of MFC. Every single episode of S.O.S (Save Our Stan) ended with a puzzle or a coded message which the readers were challenged to solve or decipher in order to help Stan get out of his weekly scrape. The readers were not expected to send their answers to MFC – the idea was that they solved the puzzles and imagined they were indeed helping the hero who would otherwise be doomed. In the beginning of each weekly instalment the scriptwriter pretended that readers’ essential help was received and well-appreciated, while the evil Gannet Gunge sometimes referred to readers of S.O.S (Save Our Stan) as meddlers. 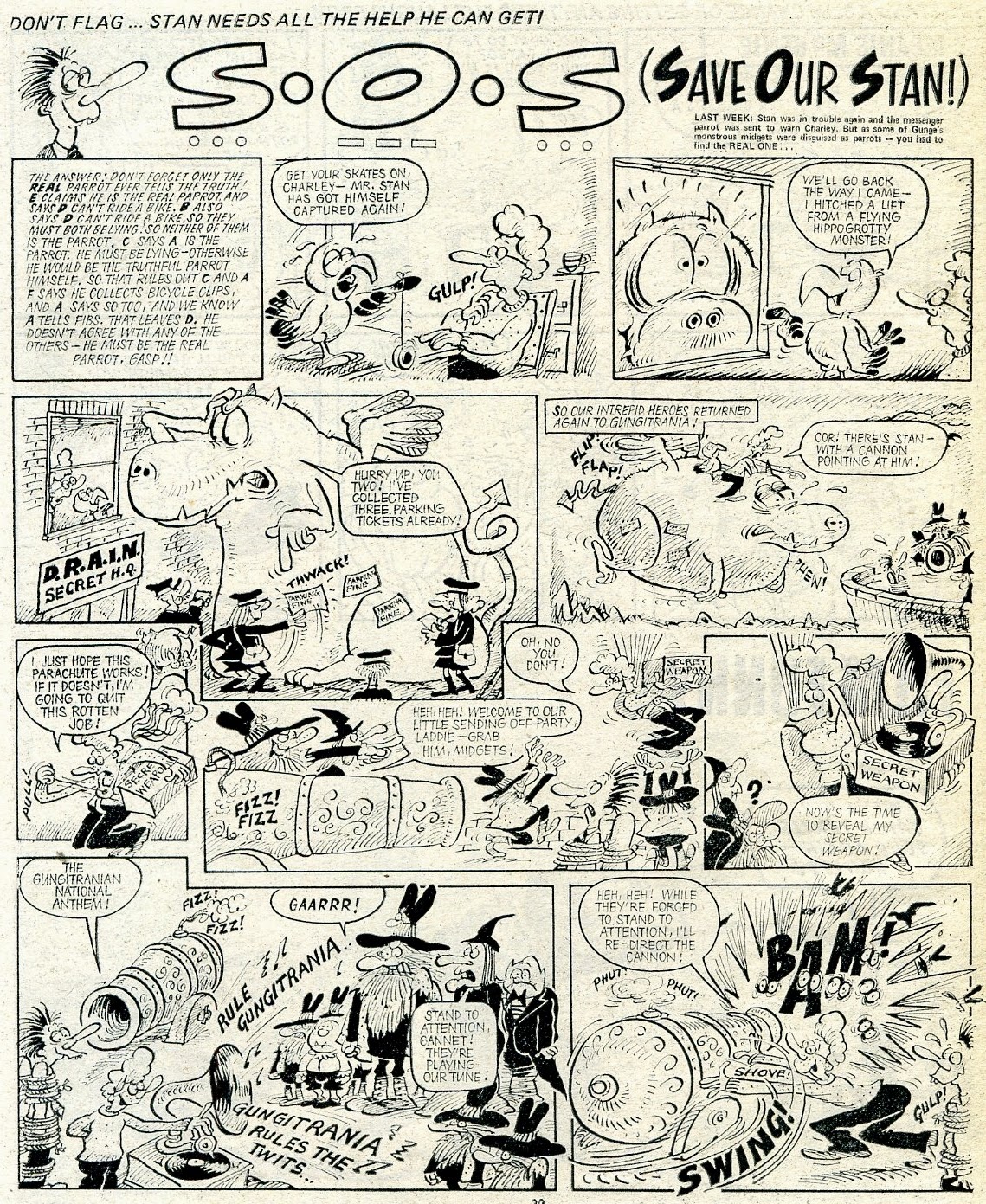 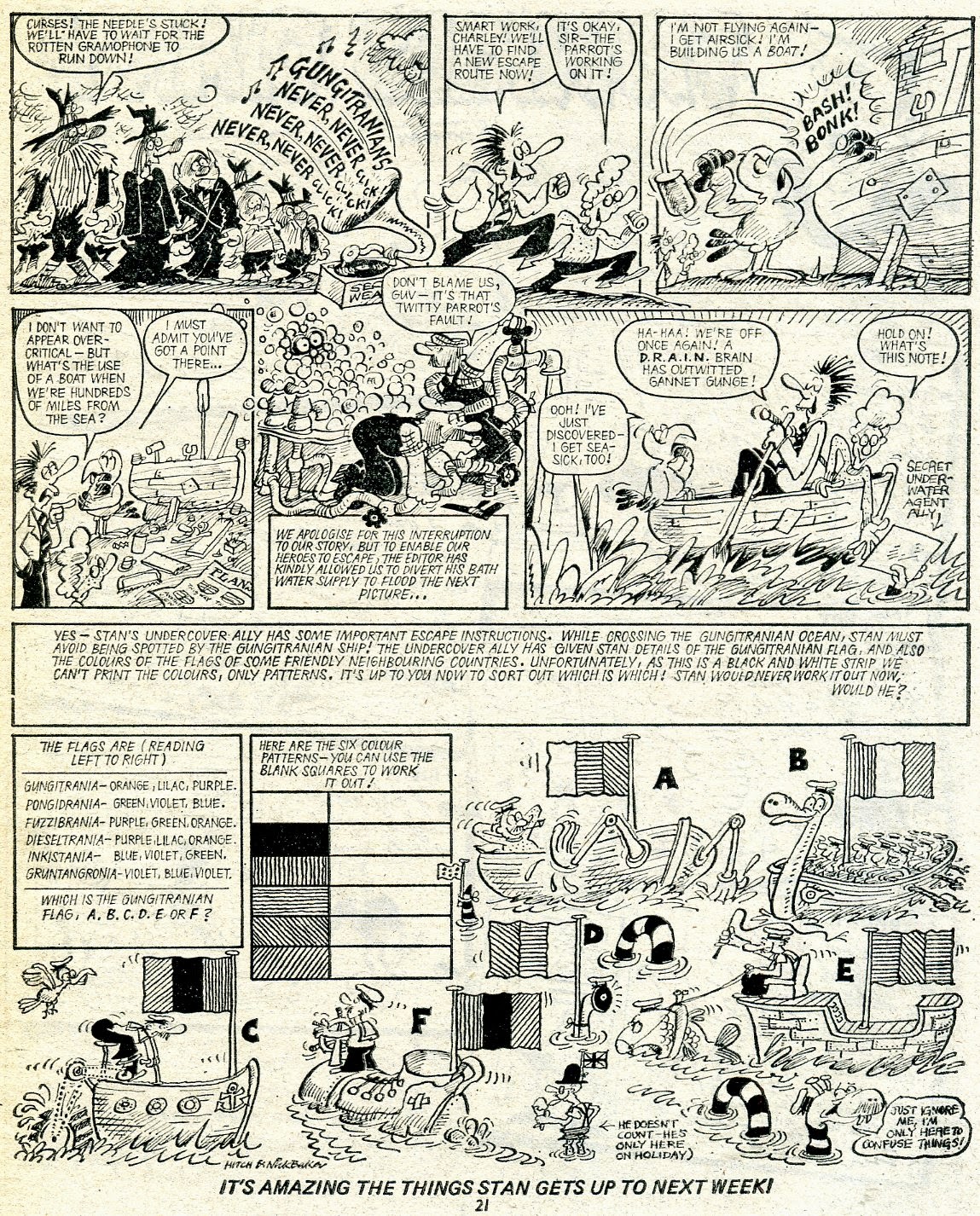 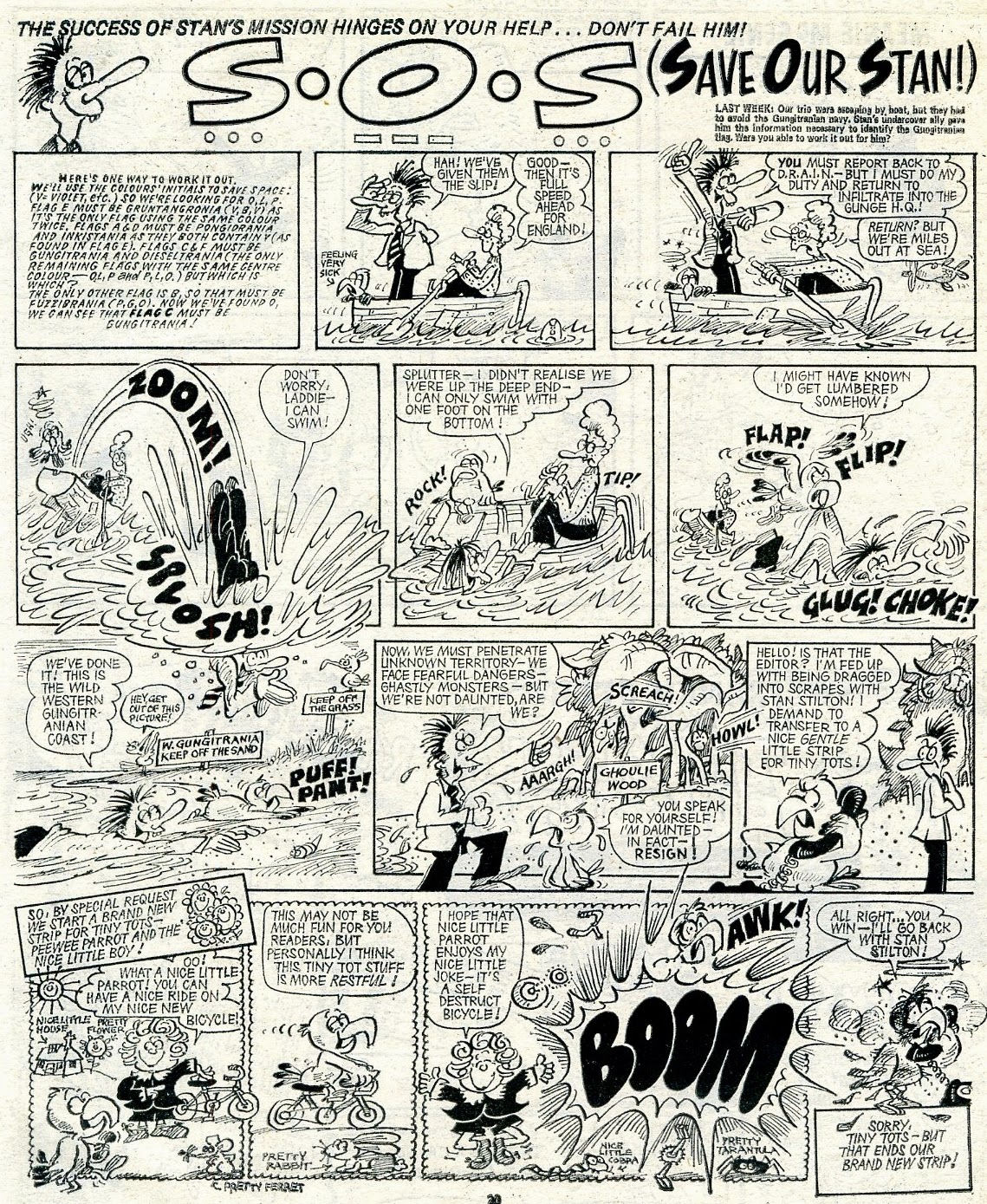 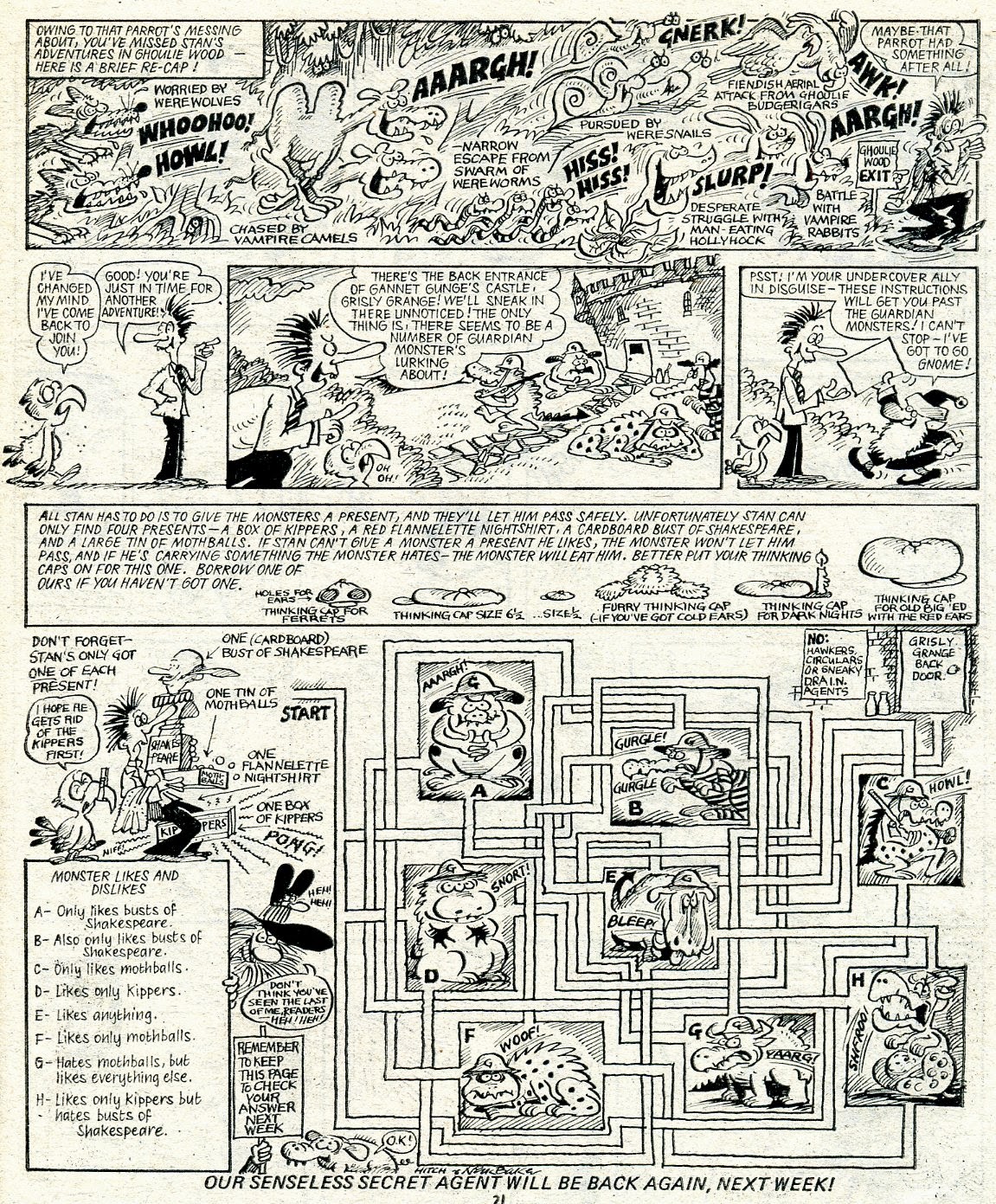 The story ended when Stan’s young assistant disguised himself as a housemaid and laced the midgets’ tea with Gunge’s monster-making serum. The serum transformed them into monsters who then turned on their former master.

Let us not forget that the real reason why the chiefs of D.R.A.I.N. sent Stan Stilton on the mission was to get rid of the troublesome employee and they certainly didn’t expect the loopy agent to do away with the criminal mastermind. So when Stan phoned in with his "mission accomplished" report and requested transport back to D.R.A.I.N., No. 1 and No. 2 realised their plan had failed. They knocked up this last puzzle and hoped it would take Stan and Charlie years to work through, ‘unless those rotten readers’ helped them out. 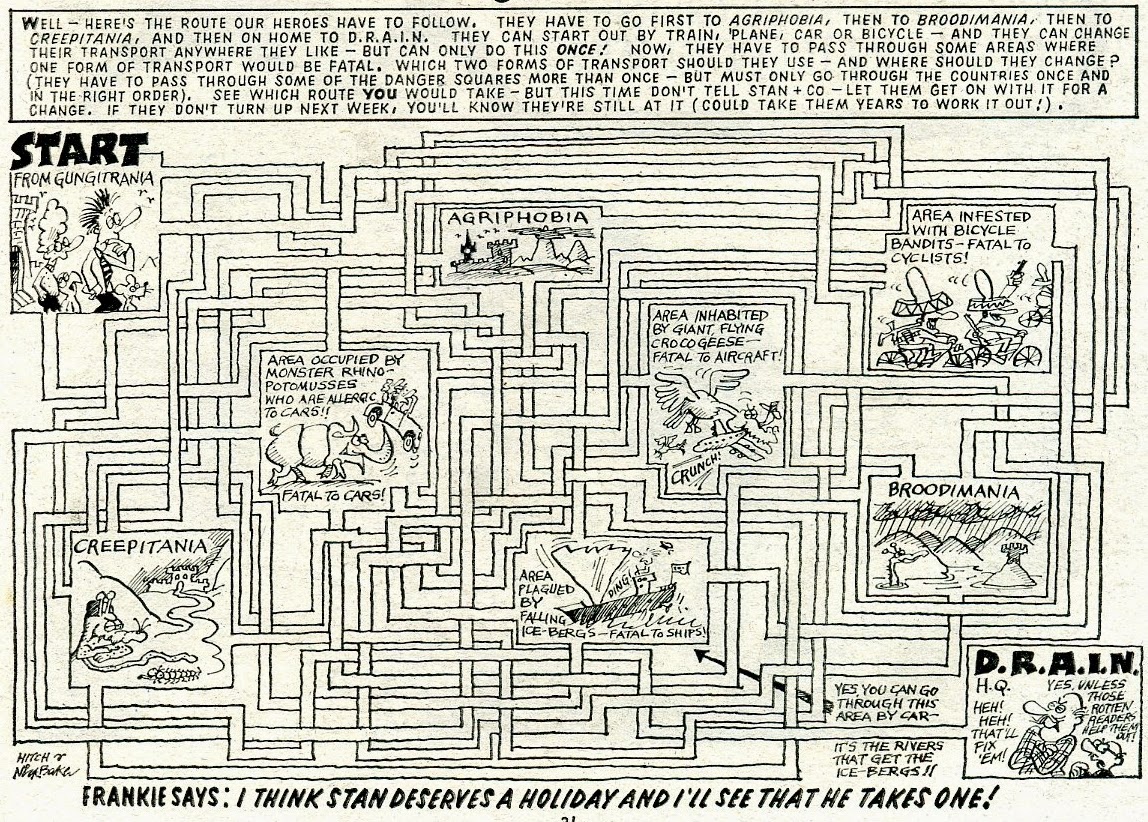 Frankie Stein, the Honorary Editor of MFC, saw that Stan Stilton took a well-deserved holiday after MFC No. 39 which contained the finale of this interesting serial. IMHO the b/w two-pagers of S.O.S (Save Our Stan) with its wacky humour and weird puzzles were an excellent ingredient in the MFC package. The artist was Nick Baker who signed nearly all the sets. Starting from No. 28 the episodes of S.O.S (Save Our Stan) came with a double signature HITCH and Nick Baker:

Was Hitch the script writer? Mr. Baker included a few portraits of the artist, the writer and the editor in the strip. I don’t know if these are faithful caricatures or simply generic drawings of people in the professions, but here they are nonetheless: 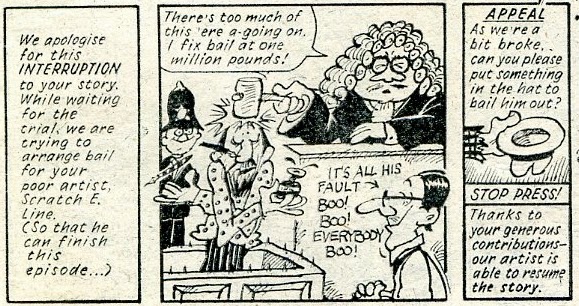 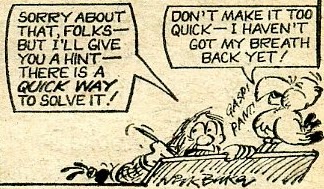 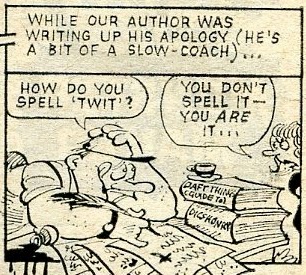 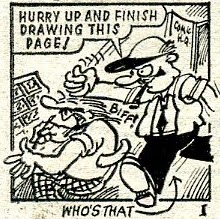 I am sure I’ve seen the strip reprinted but I can’t remember where. I will update the post with the details when I come across those reprints again.
Posted by Irmantas at 7:02 AM 7 comments: