Further to my previous post where I showed the cover of BUSTER No. 1,000, let’s take a look at two other landmark numbers of the comic.

BUSTER No. 500 can be easily identified by simply counting the weeks in the calendar because the first industrial action to affect regular weekly publication schedule didn’t occur until 1970. Here is the cover of issue 500: 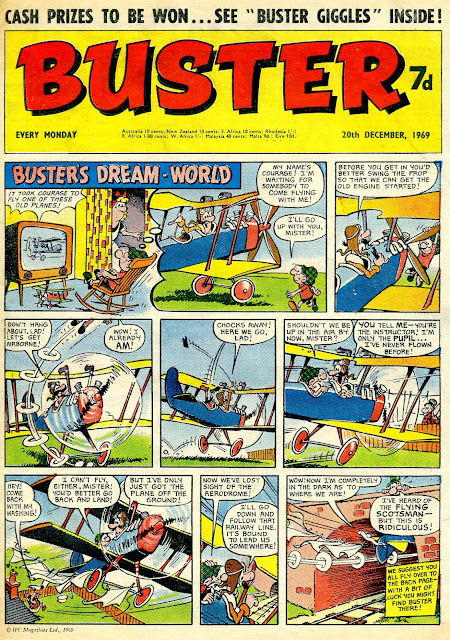 … and this is what BUSTER looked like a thousand issues later, behold the cover of No. 1,500: All Images 2016 © Egmont UK Ltd.  All rights reserved. Used with permission.
Posted by Irmantas at 9:18 AM 5 comments:


The sequence of those interesting BUSTER covers ended in June 1964. Starting from June 27th, 1964 Buster’s Diary was all over the cover and non-humour splash panels were never used again. BUSTER continued as a mix of humour and adventure strips for quite a while and there was no apparent reason for reverting to the old cover design at that stage. In fact, with the introduction of The Astounding Adventures of Charlie Peace on June 27th, 1964 the balance tipped even more towards adventure, but the editors probably had their reasons. Perhaps they felt that promoting BUSTER as part-adventure paper was a disadvantage to the sales of the new adventure comic HURRICANE that was launched in February of 1964. 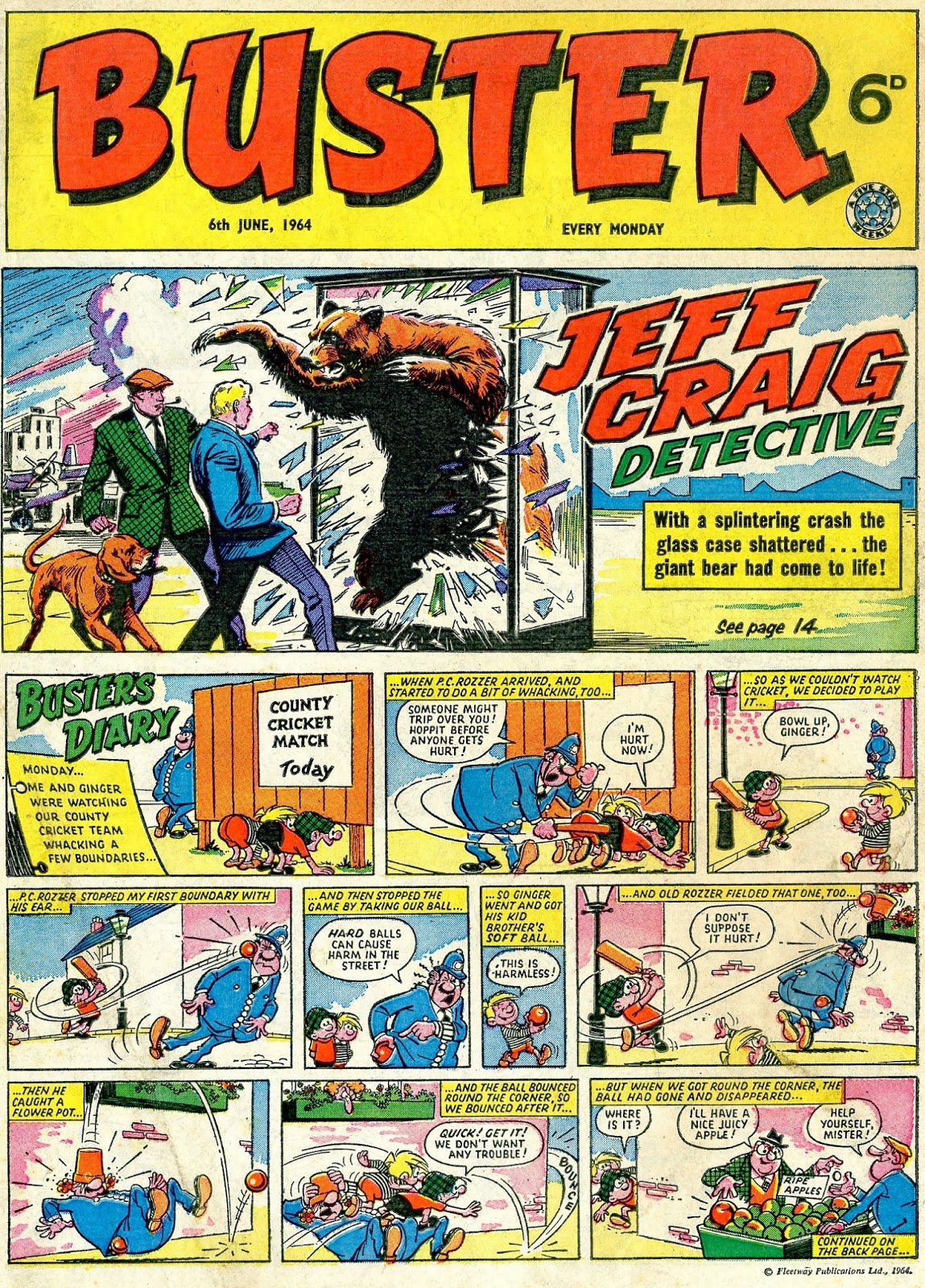 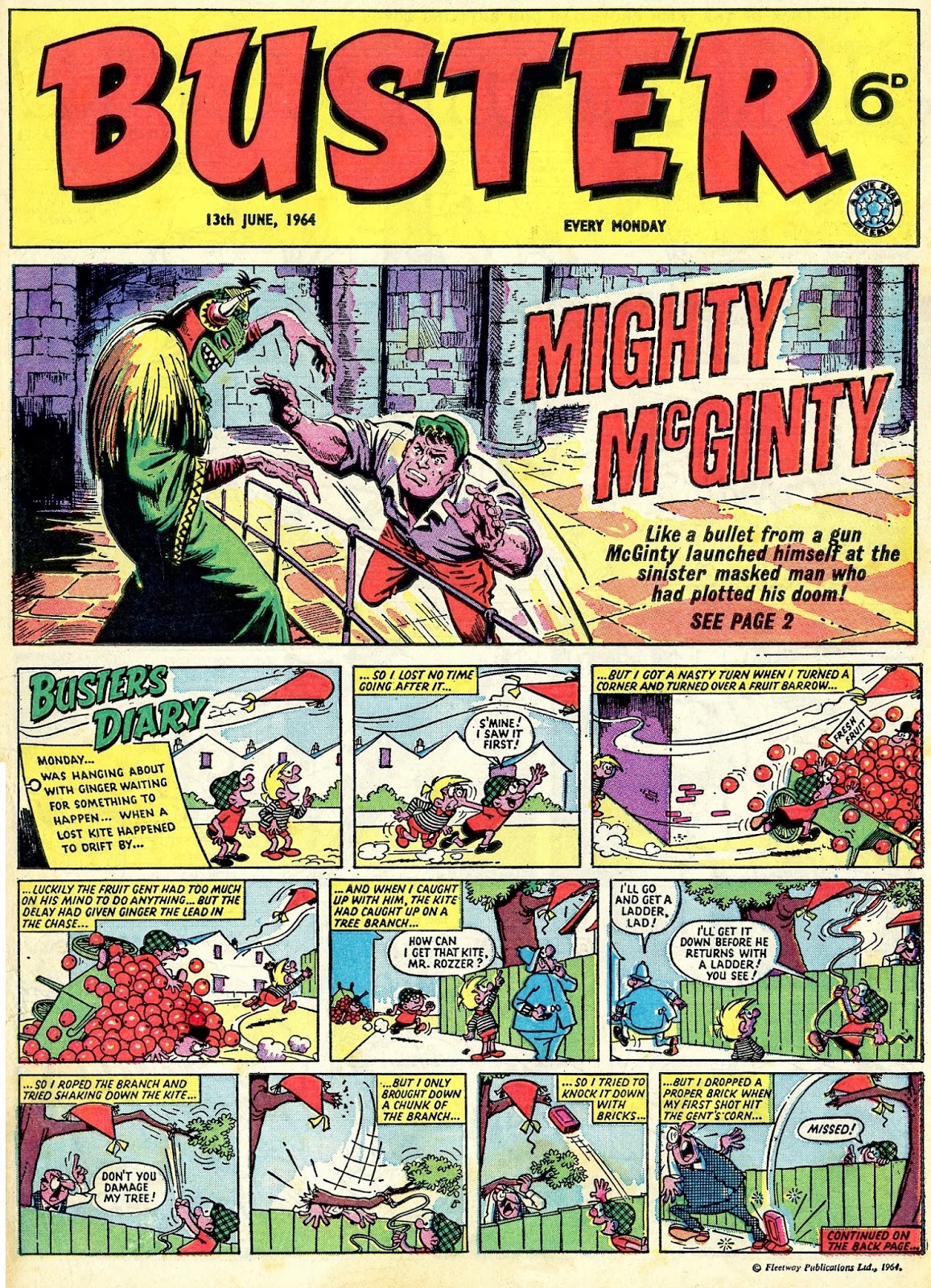 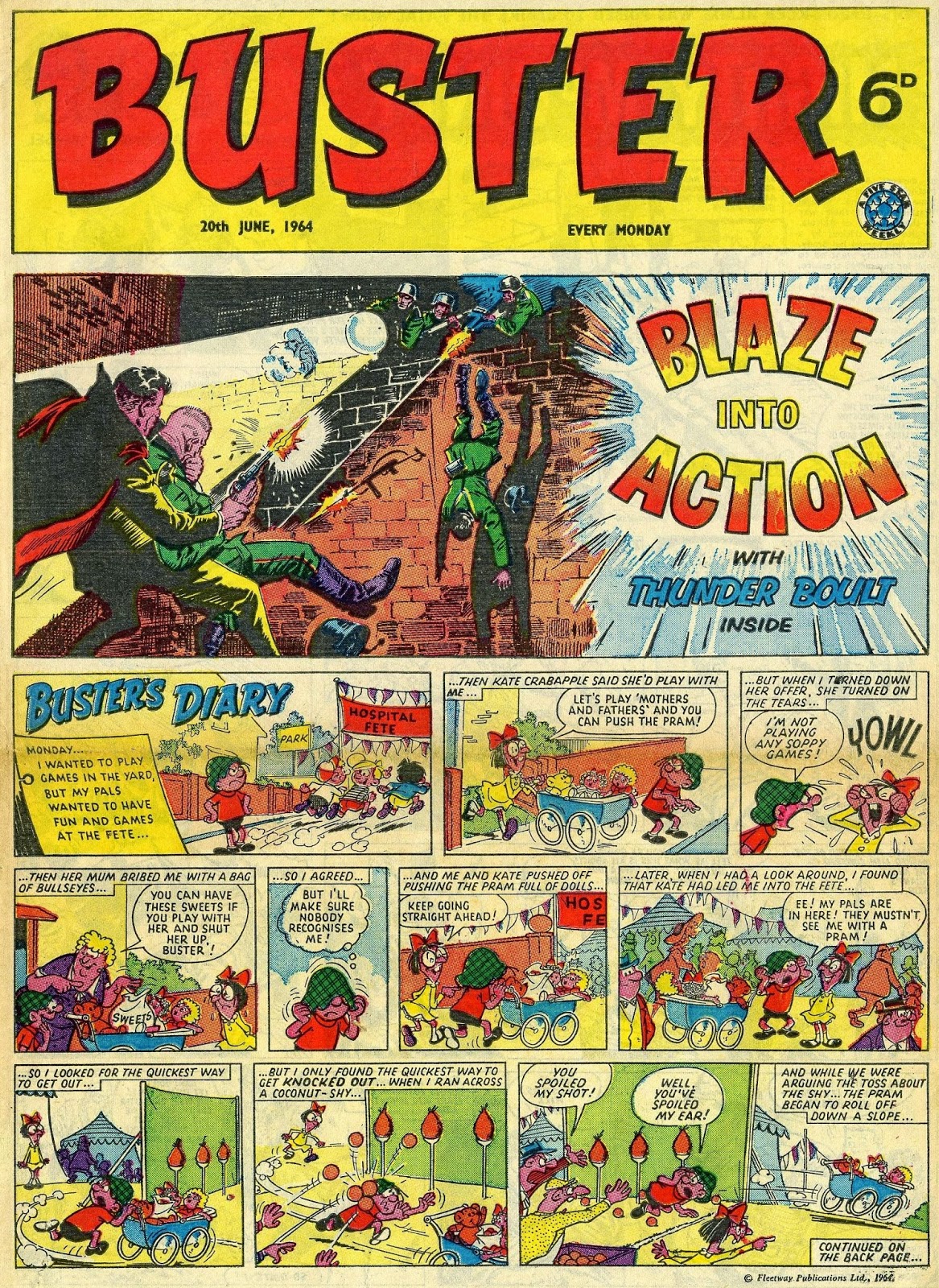 Judging by the slump in the number of daily visits and comments, this series of blogposts wasn’t a tremendous success, so I’d better get back to the usual business and MONSTER FUN COMIC is next in line, as promised.

Apparently, the cover galleries didn’t succeed in reaching fellow collectors with spare copies of BUSTER to sell or swap but since they will continue their existence on the web courtesy of Blogger and Google, I will repeat the usual mantra one last time and maybe one day it catches the eye of the right person…

As I explained in my introduction to this series HERE, I started it hoping perhaps it will attract the attention of BUSTER collectors with spare copies of the title and they’ll help me fill my few remaining gaps. Please, contact me via e-mail if you have copies to sell or swap and don’t mind shipping abroad because I am not in the UK. I have 25 – 30 spare copies from the early 60s and might help fill some of your gaps, so e-mail me for a list and details about condition. See my blogger profile for the address.


The second Shrinker story (Return of the Shrinker) ended in BUSTER dated March 21st, 1964 (Ray Moor’e and Steve Holland’s BUSTER Index 1960 – 1995 wrongly says it concluded on Feb. 15th, 1964). In the end of that story the evil scientist Capek found himself in the hands of the law and was put behind bars at last, but promised to return and claim his revenge. And return he did in BUSTER dated May 2nd, 1964. Gang boss Madago devised and flawlessly executed a daring plan to free Capek hoping that the two can form a team and become the richest men in the World. He underestimated the cunning of the evil scientist who used the crime syndicate’s resources to perfect his new shrinking machine and then turned it against the gang boss. With Madago out of the way, Capek is now the biggest crime boss alive, fully equipped to unleash his plot against the World. 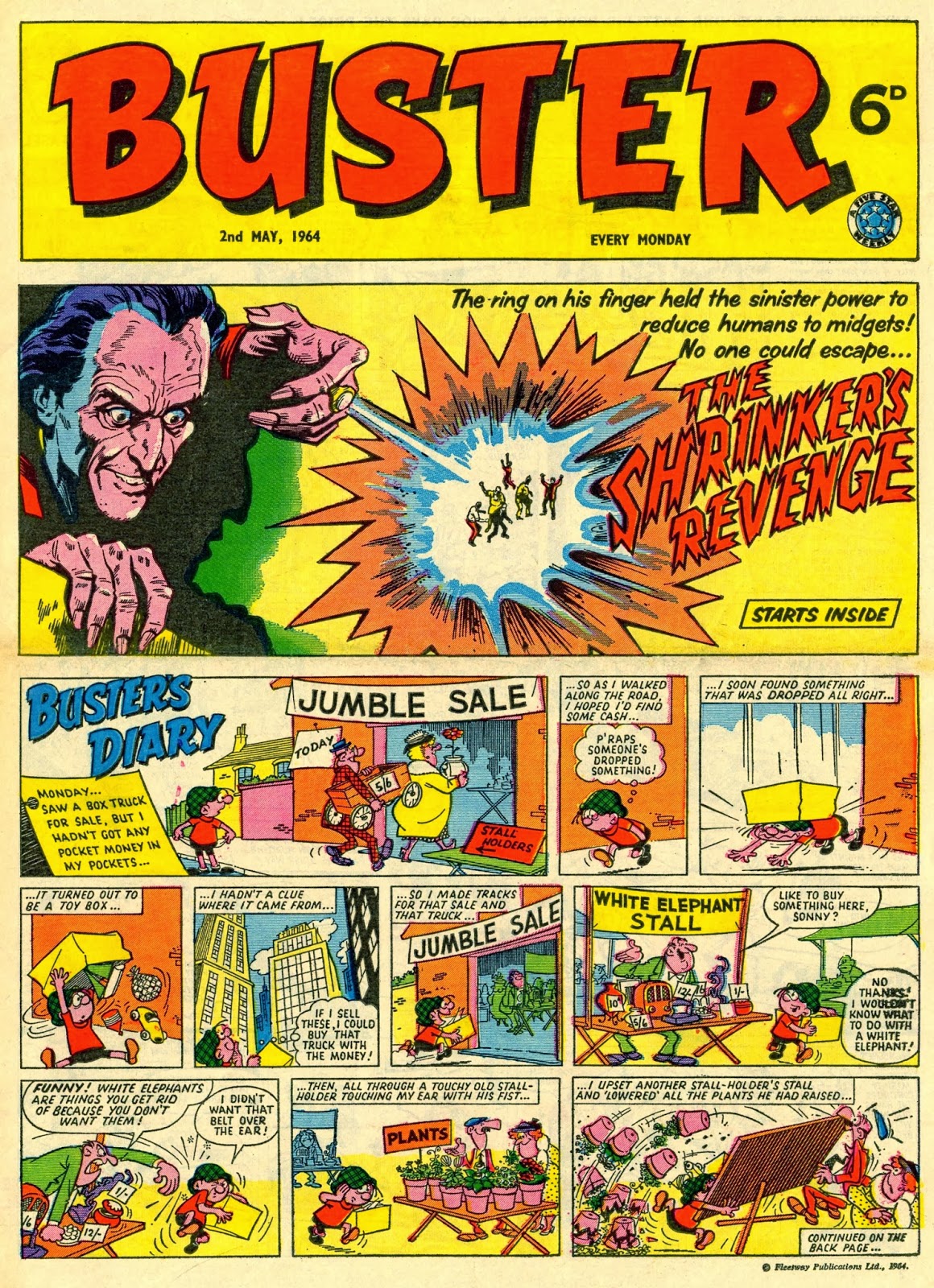 The splash panel on the cover of the next issue featured Thunder Boult - the Magician Who Went to War. The issue contained the first episode of a new suicidal mission against the dreaded German Gestapo in enemy-occupied France. 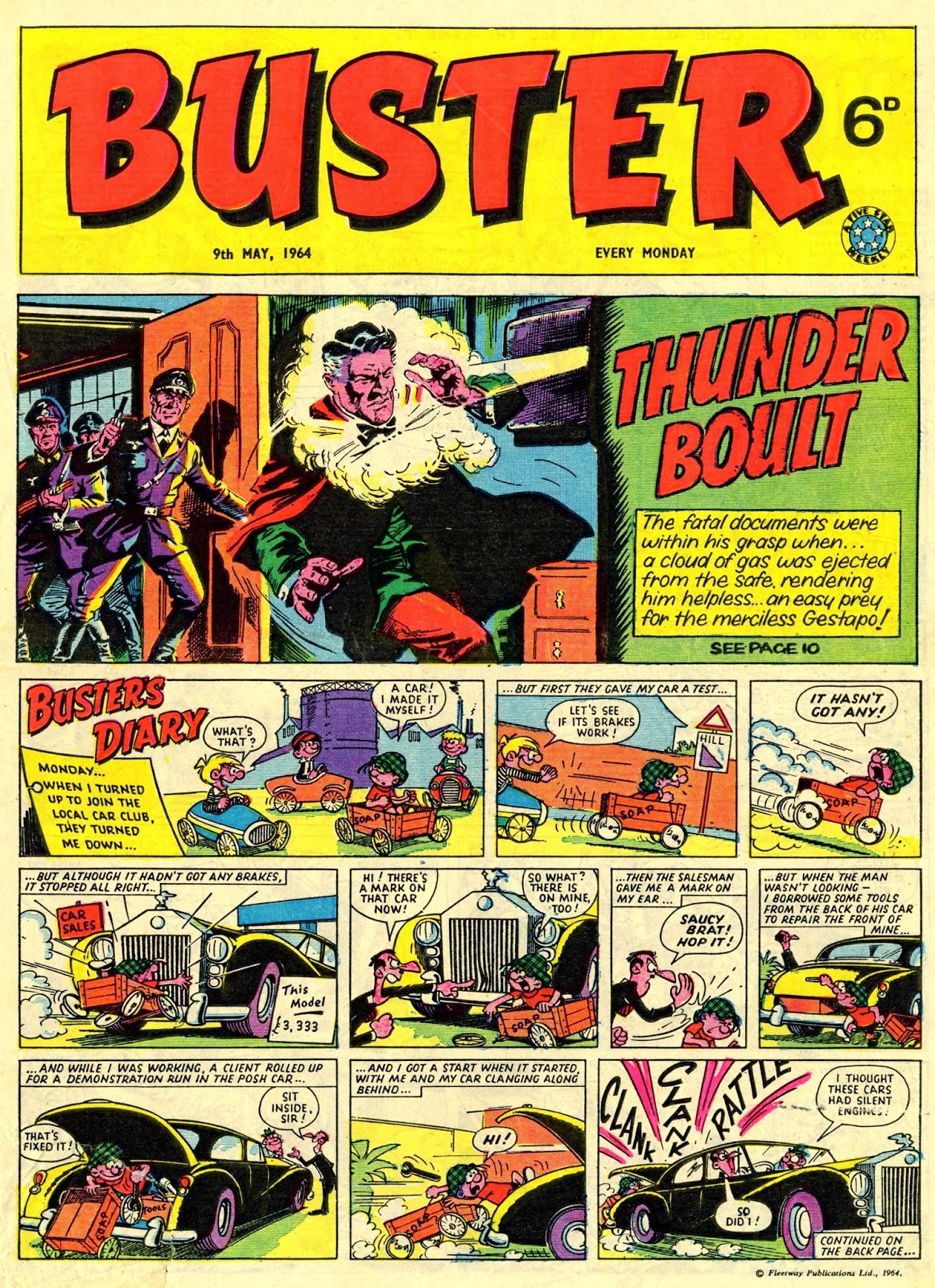 A week later a new Maxwell Hawke story was introduced: 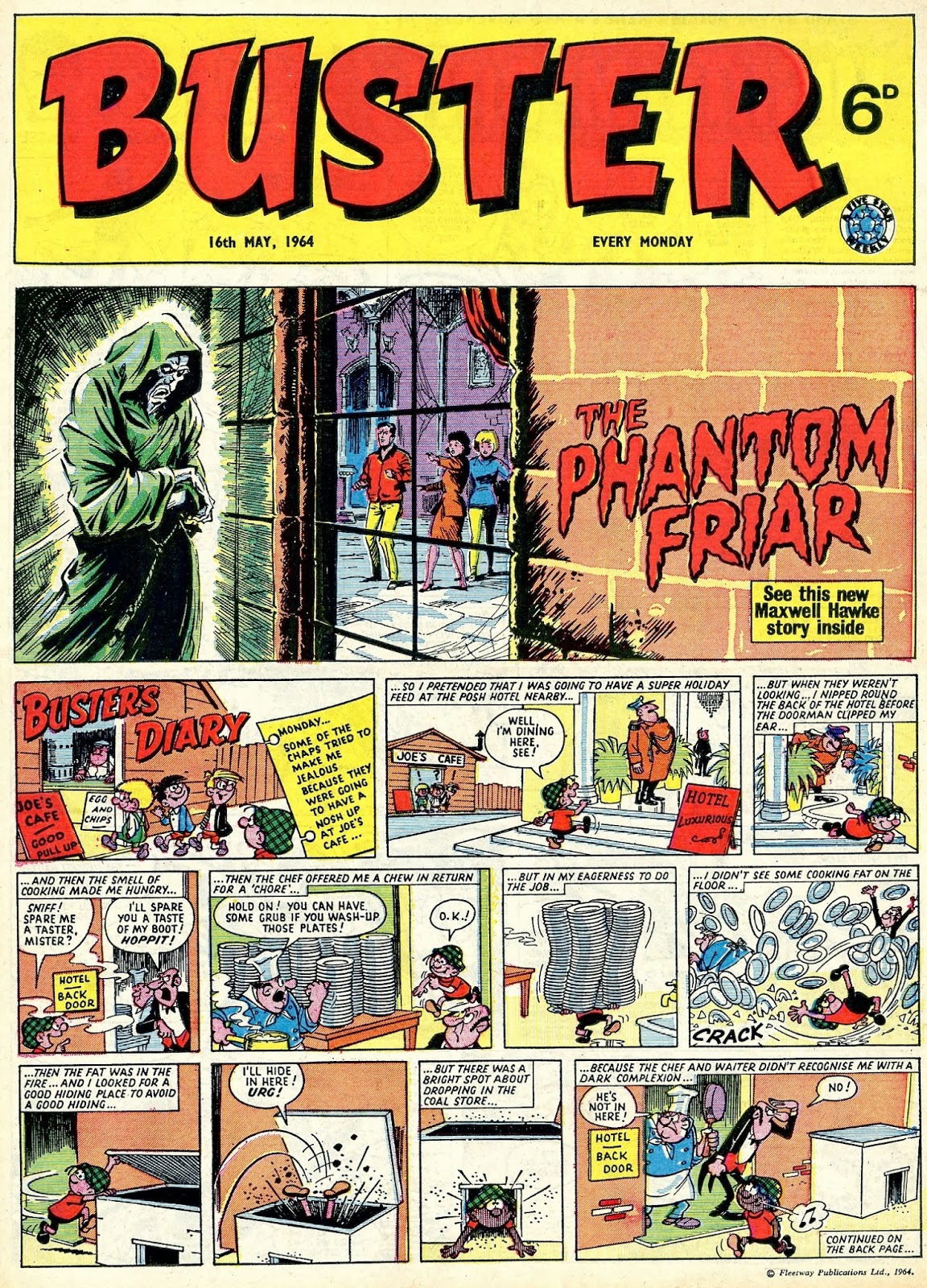 Mighty McGinty and his fighting crew are now in darkest Africa where they are attacked by a band of natives. The harder the fight, the more he likes it! 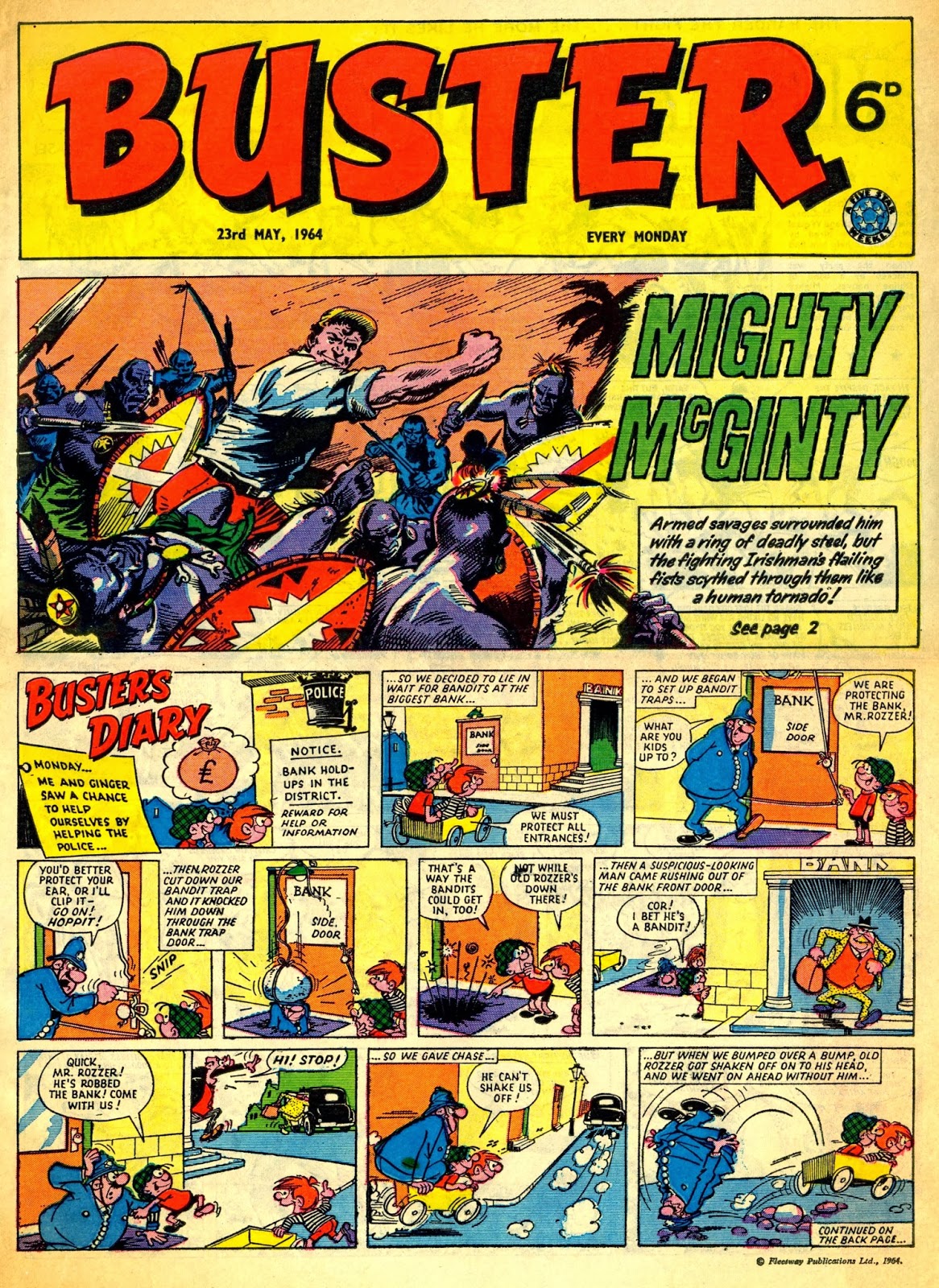 The mighty young Saxon Edmund, a.k.a. Black Axe, carried on with his ruthless war against Viking invaders of Britain. 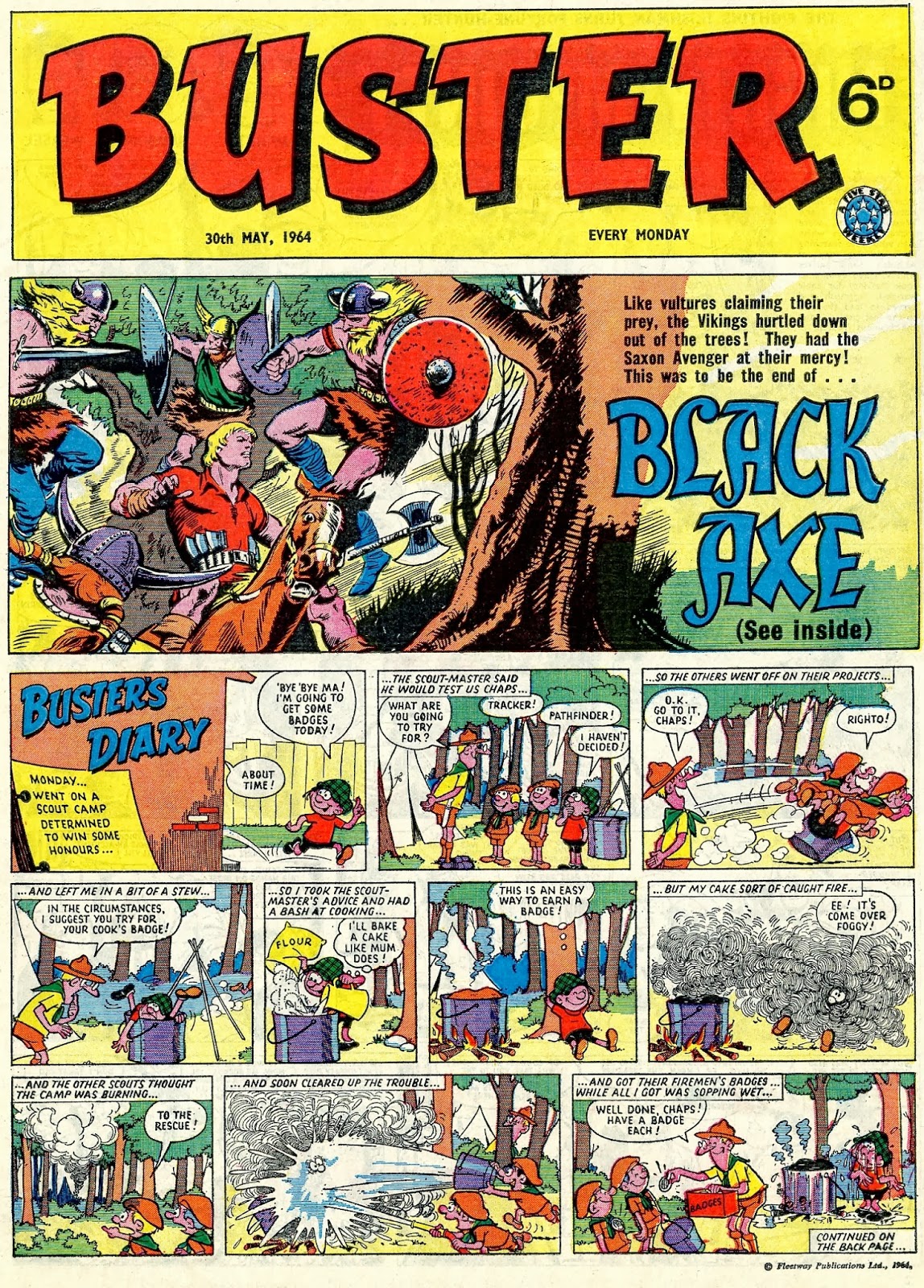 As I explained in my introduction to this series HERE, I started it hoping perhaps it will attract the attention of BUSTER collectors with spare copies of the title and they’ll help me fill my few remaining gaps. Please, contact me via e-mail if you have copies to sell or swap and don’t mind shipping abroad because I am not in the UK. I have 25 – 30 spare copies from the early 60s and might help fill some of your gaps, so e-mail me for a list and details about condition. See my blogger profile for the address.

Posted by Irmantas at 7:03 AM No comments: