A LOOK AT COR!! STRIPS: WILFRED THE WORLD'S WORST WIZARD

Wilfred the World’s Worst Wizard was a story that only appeared in COR!! annuals and was illustrated by Alan Rogers. The title says it all – the loony wizard’s spells usually went wrong and put him in trouble, most frequently with his wife. The scene of the Wilfred tales was set in Medieval times.

Here is a quick account of all Wilfred the Wizard tales:

1979 Annual: two 3-page episodes, one immediately after the other. Wilfred tries to get a job as a court wizard with one of the local kings but fails his audition; then he comes across a mean princess in distress whom he saves from the dragon and marries but soon comes to regret it.

1980 Annual: a 4-page episode (the only one with the short version of the title, Wilfred Wizard) in which Wilfred Wizard tries to help Peterkin find a wife to look after him and tidy his cottage.

1981 Annual: two 4-page episodes. In the first Wilfred Wizard tries to make the King’s sad-faced daughter (probably his wife’s little sister) laugh and win a reward of 100 crowns. For once he succeeds but only thanks to his clumsiness, not the magic. In the second episode (signed by the artist) Wilfred tries being a knight-errant but ends up on his usual night errand when his beefy wife refuses to move off her sofa to make him supper.

1982 Annual: one 4-page episode signed by the artist. Wilfred Wizard sparks a war between the King and his nasty neighbour Baron Wasteland. All turns out well in the end thanks to Wilfred’s spells that actually work but the King and his men still prefer to excuse themselves when the Wizard wants to demonstrate more of his tricks.

1983 Annual: two 4-pagers. In the first one the King makes Wilfred Wizard take the place of his knight whom the nit renders unfit for the jousting tournament. In the second tale (signed by the artist) Wilfred decides to make himself big and strong so that he can run all the errands and appease his mean wife. Here is the whole episode: 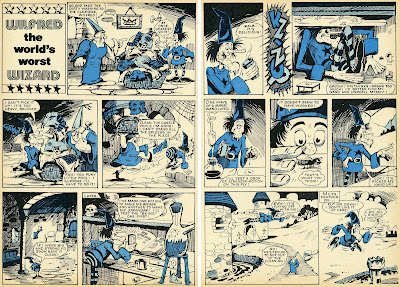 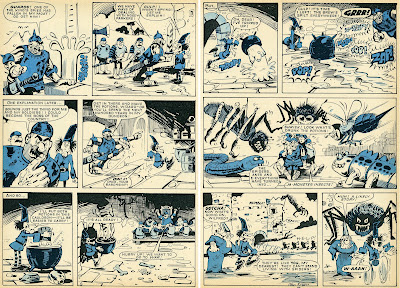 1984 Annual: two 4-pagers. In the first Wilfred goes to cut himself some wood to warm his chambers and brings home a dragon who is grateful to the daft wizard for (accidentally) lighting his fire with a Roman candle and saving his life. In the second episode Wilfred uses his magic to get a new cart so that he and his wife can make it to Aunt Griselda’s castle on time for lunch: 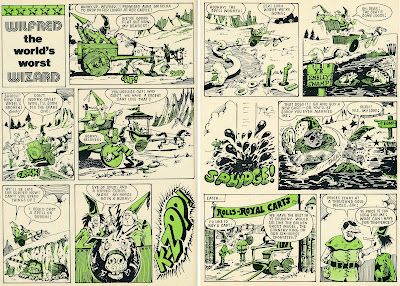 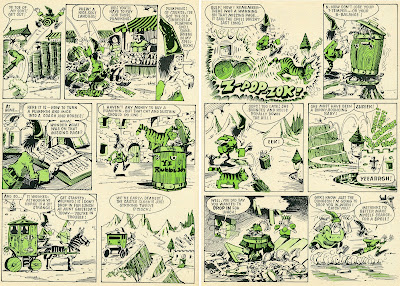 1985 Annual: two 4–page episodes, both signed by the artist. In the first story Wilfred joins the King’s court on their way to the picnic at the sea-side. When the tide washes the cart out to sea, Wilfred Wizard transports the King and his party home on an improvised flying carpet, without realising it is tartan cloth that will take them to Scotland. In the second tale Wilfred Wizard tries to please his wife and get her a bearskin coat like the one her sister has. The missus is in for a shock when Wilfred’s spell makes all of her clothes disappear leaving her bare-skin:

1986 Annual: two 4-page episodes, both signed by the artist. In the first tale Wilfred is the only one in the castle who is not ill with cold and succeeds in repelling the attack of the army of the King’s enemy Baron McBadd. In the last tale Wilfred tries his best entertaining auntie Groanface at the King’s banquet. It turns out he picked a cook book to learn his tricks from while the cook used Wilfred’s spell book to make his special soup that turned all the guests into frogs…
Posted by Irmantas at 7:42 AM 3 comments: