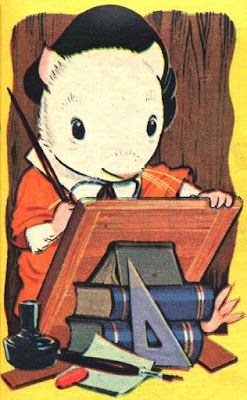 Judging from the low number of pageviews and hardly any feedback on the last few blogposts about Gulliver Guinea-Pig, a detailed account of the complete Playhour series from 1958 till 1965 is unlikely to be very popular but I have started planning it nonetheless. Wouldn’t it be fun to trace the adventures of the restless traveler drawn by some of the finest artists - starting with both main illustrators of the strip, i.e. Philip Mendoza: 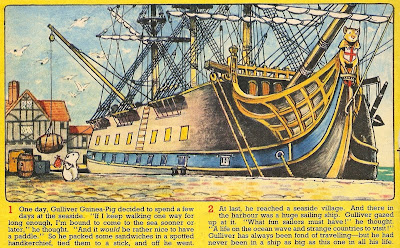 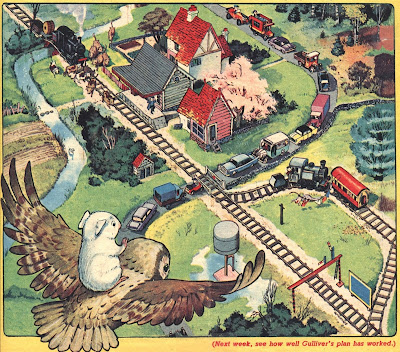 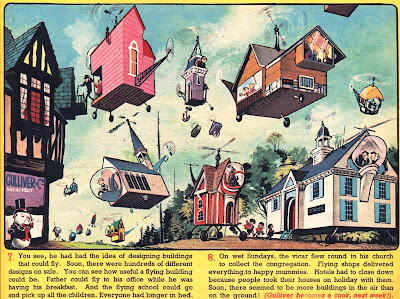 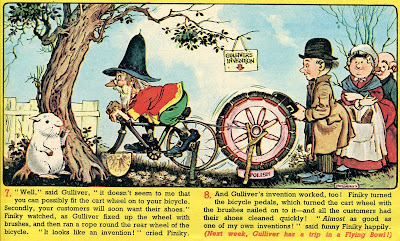 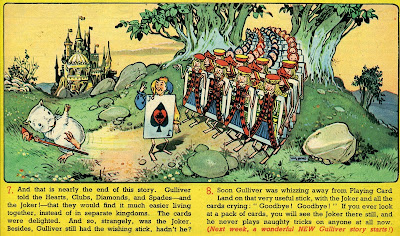 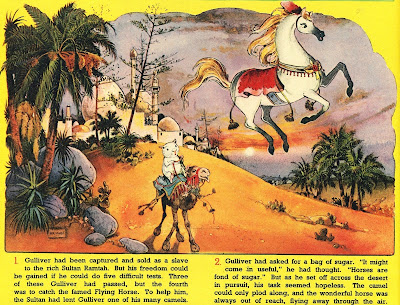 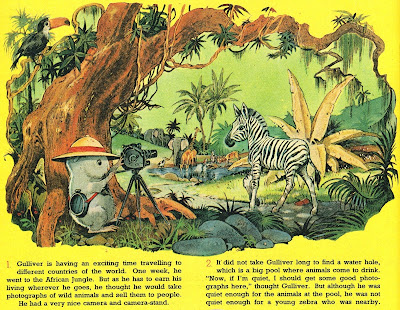 … and including those who only occasionally stepped in for the regulars, such as another Playhour’s star artist Fred White: 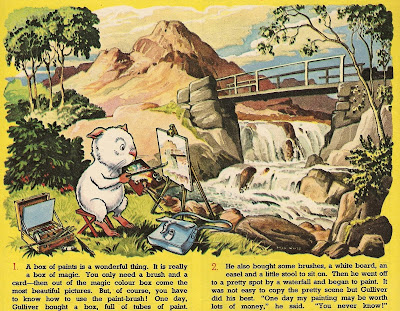 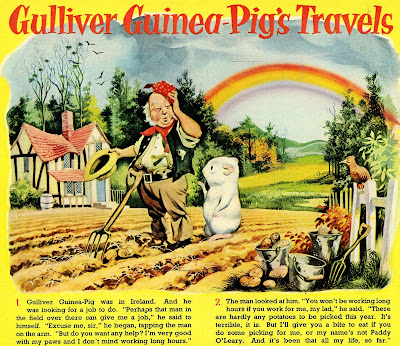 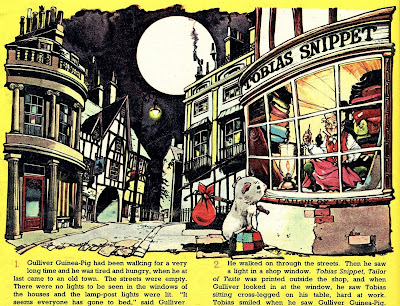 … and a few others, such as Cambra whose name I’ve never heard before: 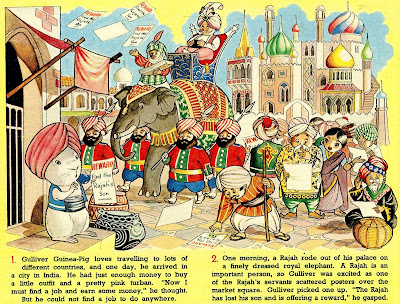 I am only missing 12 episodes, they are all from the years 1958 and 1959, and it looks like a fellow Gulliver fan from Australia will help me fill the gaps in the near future! 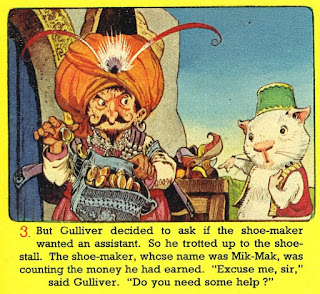 THE ORIGINS OF GULLIVER GUINEA-PIG – PART ONE


For the first time on Kazoop!!, I have an article by a guest writer! The remarkably researched piece by John Wigmans, a fellow enthusiast of Gulliver Guinea-Pig, covers the origins of the bold little traveler. Many thanks to John for choosing my blog to publish his article. Here is part one:

The First Steps of an Unlikely but Very Likeable Hero: Gulliver Guinea-Pig 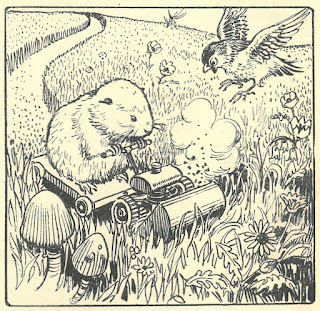 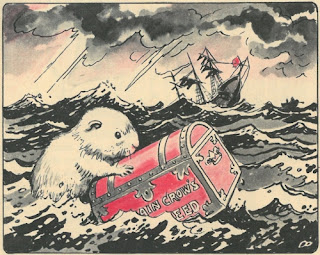 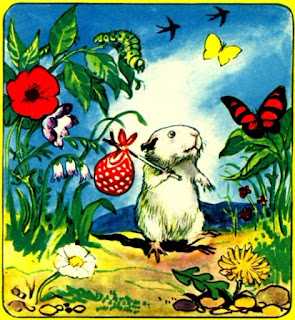 The Fleetway House, Farringdon Street, London: HQ of The Amalgamated Press, publisher of numerous magazines and comics. In the spring or early summer of 1957 it became clear to the residing management that the sales of Tiny Tots nursery comic were declining. This long-running weekly (first issue 22 October 1927) had survived the Second World War and paper rationing. But in the mid-fifties the comic had lost most of its appeal to young readers and parents who bought it for their children. Admittedly, Tiny Tots looked very old-fashioned compared with the new line of nursery comics that had been launched by the AP in 1954: Jack and Jill (in February) and Playhour (in October). 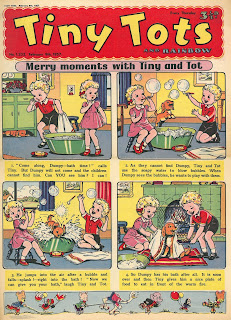 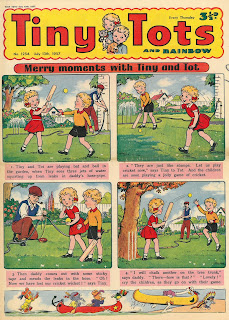 The people in charge (could this have been Leonard Matthews, by then Managing Editor of all of the Amalgamated Press’ comics?) decided to take action. There were three options: axe the title; incorporate the comic with another more successful one; or revamp the ailing weekly to make it look more modern in an effort to boost circulation.

Killing off Tiny Tots completely seemed a bad choice: in 1957 it was the only remaining real pre-school comic of the four ‘ancient’ juvenile AP-weeklies that had survived the War. By the spring of 1957 the other equally old-fashioned nursery titles Playbox, Rainbow and Chicks’ Own had already dropped out of the picture. This must have been the result of declining sales. Playbox (first issue 14 February 1925) ran until 11 June 1955, after which it was merged into the highly-successful Jack and Jill. Even the older Rainbow (first issue 14 February 1914) was incorporated with Tiny Tots on 5 May 1956; the latter obviously still enjoyed a higher circulation than the former. And finally Chicks’ Own (first issue 25 September 1920) was absorbed by Playhour on 16 March 1957.

Bill Lofts, a historian of old boys’ books and story papers, wrote this about the demise of Chicks’ Own in The Collectors’ Digest of May 1957 (No. 125):

Perhaps his last remark hit home with The Fleetway House. Fortunately, Tiny Tots was not merged with either Jack and Jill or Playhour – not yet anyway. But something needed to be done before it was too late. Perhaps a revamp, in an effort to boost circulation? Essential ingredients: a new formula; a lot of new, modern strips and features to replace the old-fashioned ones; a new editor; etc.

In order to make it look like the successful Jack and Jill and Playhour comics, yellow borders were introduced on the cover; a group of three companion papers was born. The issue for 12 October 1957 (No. 1267) was the first improved Tiny Tots. The adventures of the popular Tiger Tim and Mrs Bruin’s Schoolboys were transferred from the back page to the front. According to the artist Colin Wyatt who had joined the art department at The Amalgamated Press in August 1957 (and who was effectively an eye-witness), this particular installment was drawn by Peter Woolcock, one of the regular artists of Playhour and Jack and Jill. 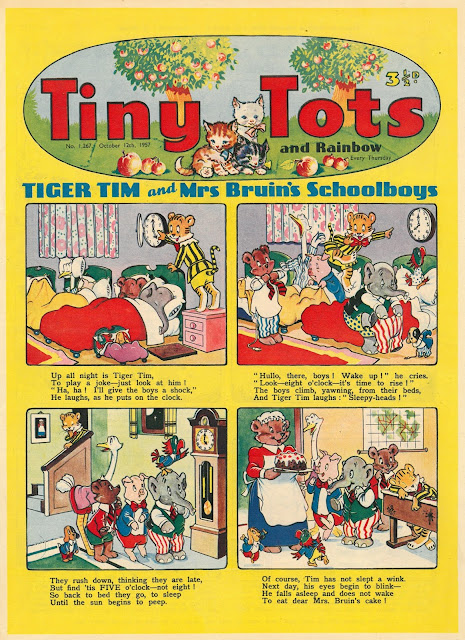 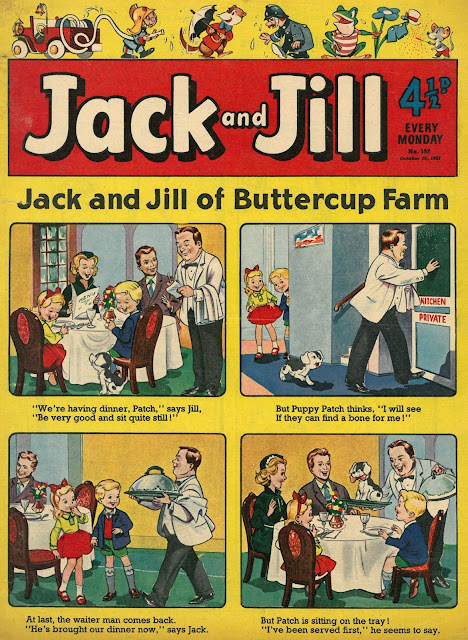 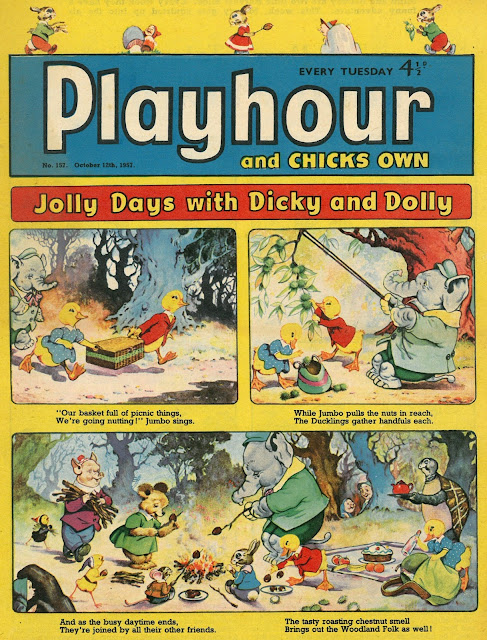 Besides Woolcock, a host of Jack and Jill and Playhour contributors also got involved with the new Tiny Tots. Artists like Ron Embleton, Basil Reynolds, Ron Nielsen, Nadir Quinto, Philip Mendoza and Hugh McNeill contributed one or more strips between No. 1267 and the final issue No. 1334.

Not surprisingly, two key men from Playhour became very important. One was Basil Reynolds, art editor of Jack and Jill, Playhour and Tiny Tots since February 1956, who was appointed editor of the latter in August 1957. Obviously, he was there to oversee all the changes necessary to revamp the comic. The other one was David Roberts, Playhour’s assistant editor, who continued to do what he did best – writing stories. One of the new features was The New Nursery Rhymes that appeared on the centre pages, with drawings in black, grey-wash and red-wash. Roberts penned the first instalment with obvious ease and delight (illustrated by Ron Embleton). 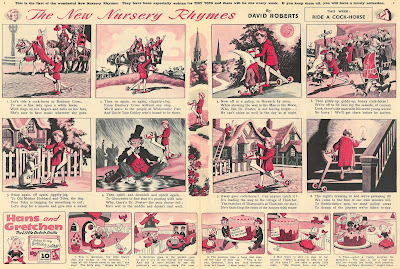 Unfortunately, I do not own a complete run of Tiny Tots’ final years but I do know that The New Nursery Rhymes continued right up to the very last issue of the comic. I presume that Roberts wrote most of the scripts and the rhyming captions. For instance: Tiny Tots No. 1327 (6 December 1958) has The New Nursery Rhymes ‘by David Roberts’ on the centre pages. The artwork looks much older (taken from the AP’s archives?), so it is possible Roberts wrote new rhyming couplets to go with these antiquated drawings. The final issue of Tiny Tots - Companion paper to Playhour and Jack and Jill, dated 24 January 1959 (No. 1334) still had The New Nursery Rhymes on the centre pages.

The series was really a hotchpotch of stories. Most were written by Roberts, some by Basil Reynolds (at least one with drawings by Ron Nielsen), others were not credited at all. Some installments were reprints of much older artwork with new rhyming captions. But at one point the man with the ‘plump figure and a somewhat seeded look’ (as Steve Holland described Roberts on his BearAlley-blogspot), created a character that would go down in comics history as a true masterpiece.

Enter Gulliver Guinea-Pig, one of the most endearing heroes ever to travel the World. Created by David Roberts, this brave and enterprising guinea-pig experienced the most exciting adventures between May 1958 and September 1965 in Playhour weeklies, Playhour Annuals and a couple of books.

Come back soon for Part two!