A LOOK AT SHIVER & SHAKE STRIPS: MATCH OF THE WEEK 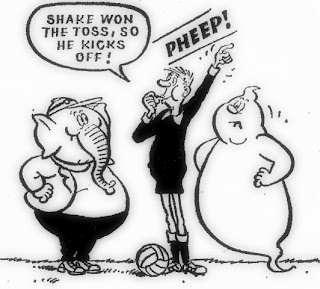 Moving slowly but surely, I have now arrived at the middle pages of the first issue of SHIVER AND SHAKE and the centrespread was allocated to Match of the Week. Every week two very strange teams would meet on the pitch and wreak havoc on each other, breaking rules and using all sorts of tricks to subdue the opponents. More often than not the outcome was the abandoning of the game.

Mike Lacey was the artist who contributed the absolute majority of weekly sets. Other illustrators of Match of the Week were Leo Baxendale, Les Barton and two (rather amateur) artists whose names I don’t know. Tom Paterson (who apparently was just starting doing work for IPC in his early rough style that he used before he began imitating Leo Baxendale) did three sets in issues 10, 37 and 42. Check out one example in the list below.

In his book A VERY FUNNY BUSINESS Leo Baxedale recalls he drew two sets of Match of the Week – the very first one that he said he had done back in 1972, and then Ghosts vs Humans, before refusing “point blank” to draw any more. He did, however, continue writing scripts for other artists to draw but surrendered writer’s duties two and a half months later.

New teams came and went every week so obviously the strip had no regular and recurring characters, except maybe the referee. Below is the list of the fixtures illustrated by the odd complete episode. Names of the illustrators other than Mike Lacey are marked next to the relevant episodes.

Issue No. 1 ● March 10th, 1973 ● Cowboys versus Injuns. Contrary to what Mr. Baxendale says in his book, the first episode was actually drawn by Mike Lacey, and the set that Mr. Baxendale remembers drawing in 1972 must have been the one that appeared in the second issue of SHIVER AND SHAKE.
Issue No. 2 ● March 17th, 1973 ● Cops versus Robbers, Leo Baxendale: 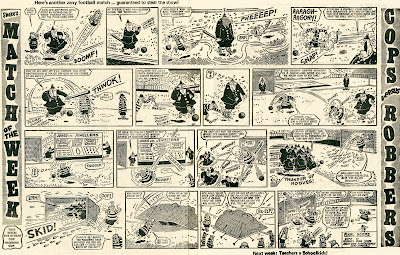 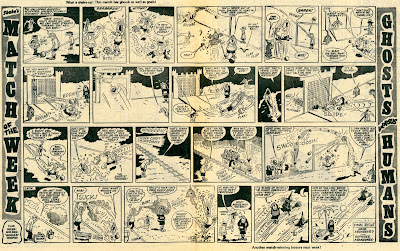 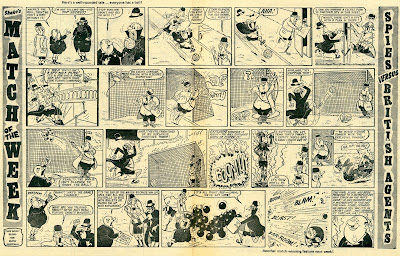 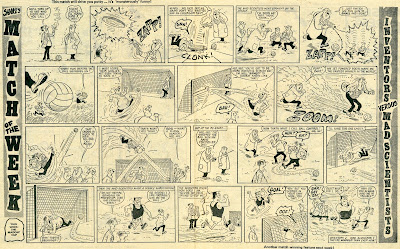 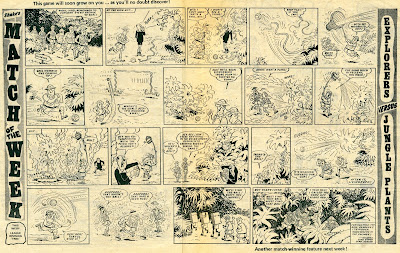 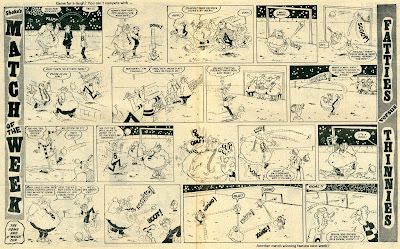 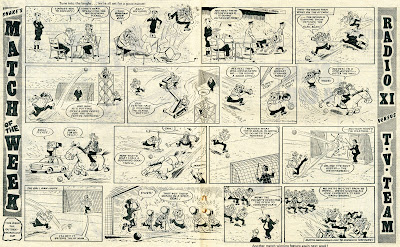 Match of the Week (Divers versus Deep Sea Creatures) appeared in the Star Guest feature in COR!! No. 181 (17th November, 1973). Illustrator unknown.

It was not all about football. In issues 15 to 20 the writer experimented with other sports such as high jump, tennis, cricket, water polo, polo and even land yacht racing but then reverted back to football. Here are some random non-football panels: 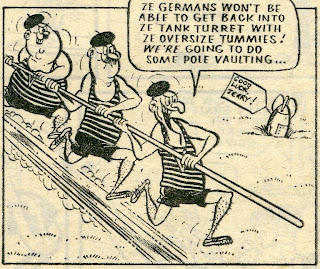 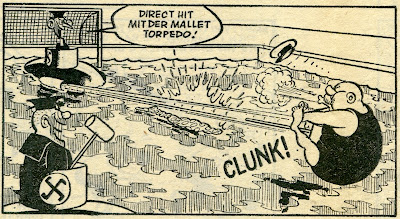 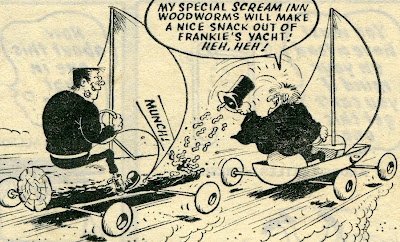 Match of the Week started in the first issue of SHIVER AND SHAKE. It lasted until issue 52 without missing a single week and was always on the centrespread. You can view a few more complete episodes by checking out three old posts in my Football series from last summer, the links are here, here and here.

I will finish with the last panel of the final episode. As it rightly says, the match between spectators and referees was probably the closest to a ‘normal’ game throughout the entire run of 52-weeks.