As promised, here is part two of the complete list of Terror TV programmes in BUSTER AND MONSTER FUN weeklies, all drawn by Barrie Appleby. Go to the previous post if you missed part one. 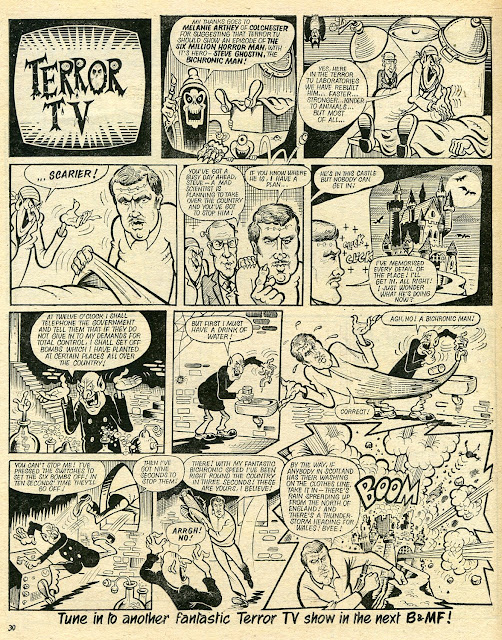 August 27, 1977 · Sportsfright hosted by Harry Carpenterror. Magnus Murkysome thanks reader for programme idea
September 3, 1977 · Magnus Murkysome tries to cancel a play by his ghosts and show some holiday sport instead but the ghosts disrupt his plan
September 10, 1977 · Celebrity Scares with Bob Punkhouse
September 17, 1977 · Demon Andrews introducing another dread-ition of This Is Your Fright, featuring Vincent Plight, horror film star supreme 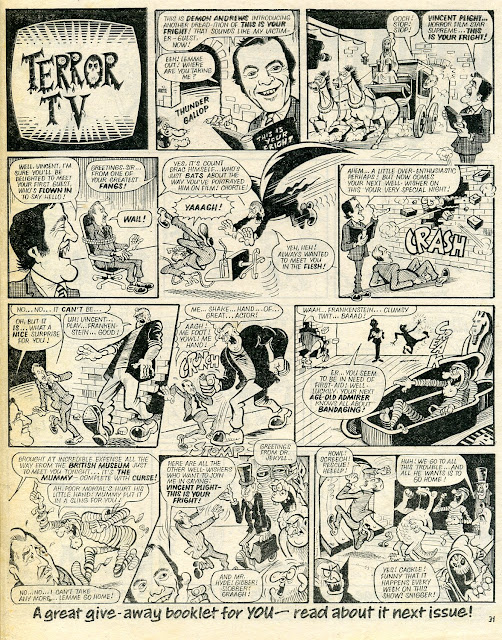 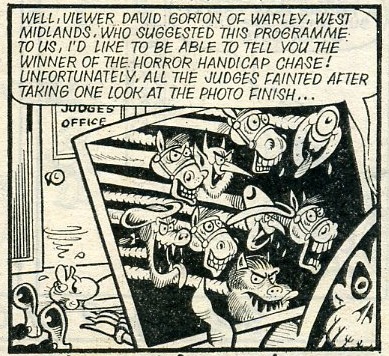 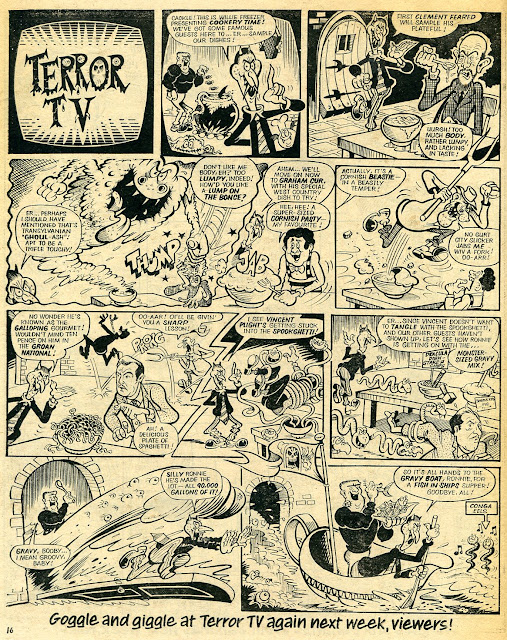 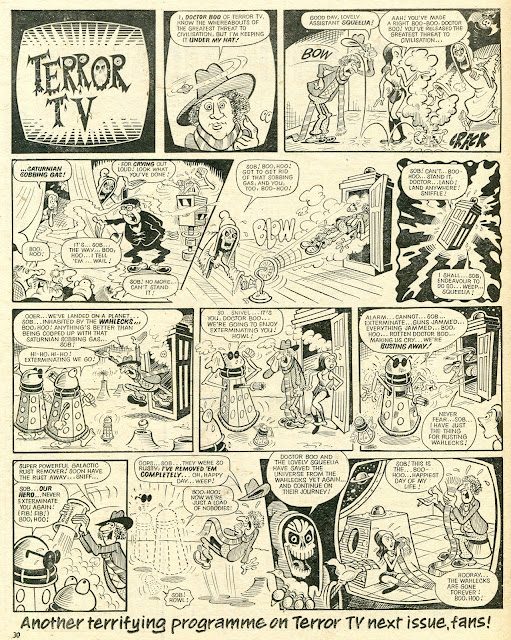 These two episodes stand out in the sense that the story spans two weeks; besides, there appears to be a crossover of at least two shows,  Coronation Street being one of them. Here are both episodes: 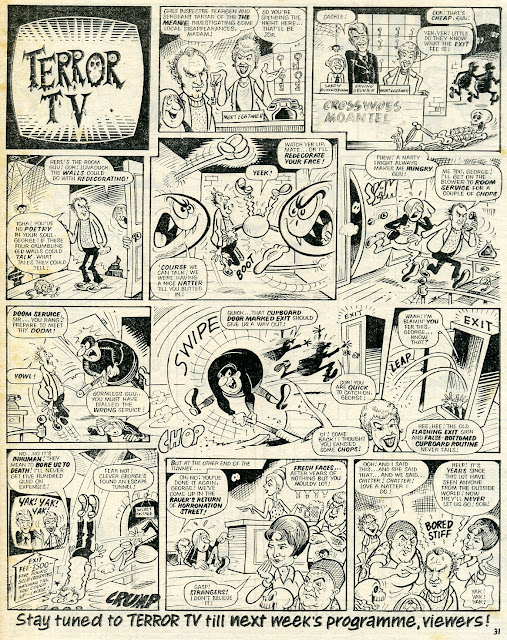 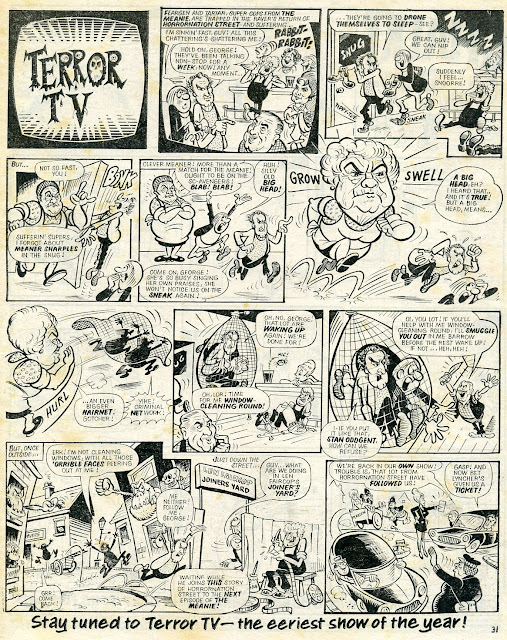 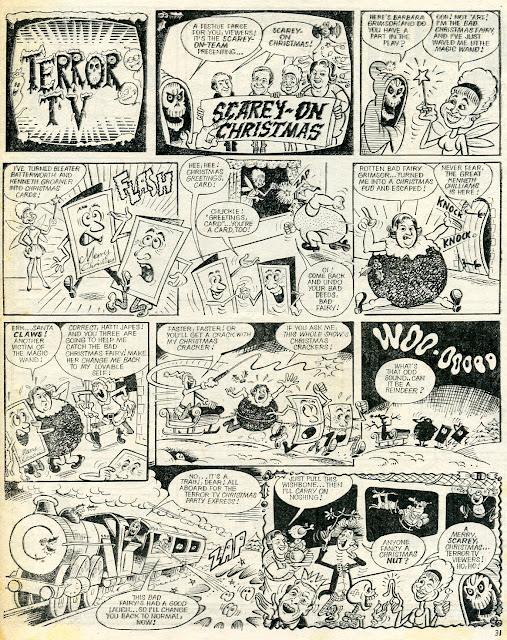 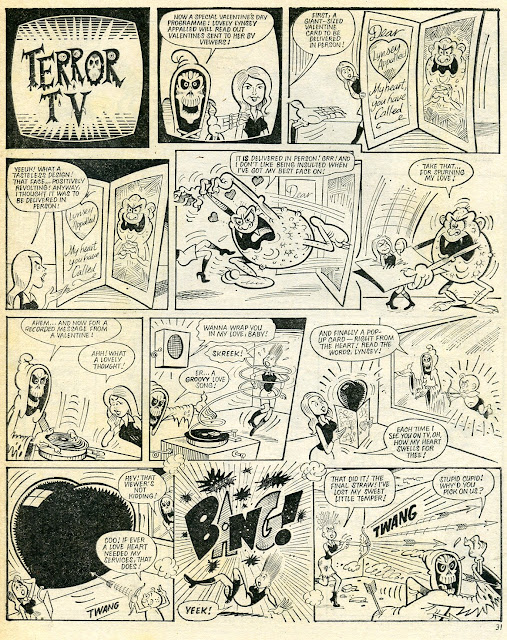 TERROR TV IN BUSTER AND MONSTER FUN – PART ONE 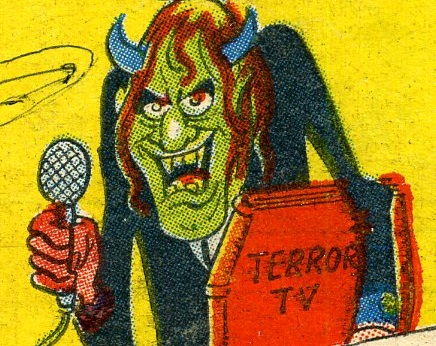 A recent e-mail from a fan and researcher of Doctor Who requesting details about episodes of Terror TV strip featuring the Time Lord made me realise that I’ve left some loose ends when covering the strips that originated in MONSTER FUN COMIC and were transferred to BUSTER when the two titles merged in 1976. There were eight of them - Martha’s Monster Make-Up, Teddy Scare, Draculass, Terror TV, Kid Kong, Gums, Mummy’s Boy and X-Ray Specs. I covered their runs in MONSTER FUN COMIC in my detailed account of MFC a few years ago. I have no wish to go too deep into BUSTER territory but the relatively short runs of Martha’s Monster Make-Up, Teddy Scare, Draculass and Terror TV in BUSTER AND MONSTER FUN make me want to cover the four strips to their very end.

I am not sure there’ll be much to say about all of them but Terror TV was a really interesting one. You can refresh your memories of the strip by revisiting my old article HERE.

In MONSTER FUN COMIC, Terror TV was a two-pager, it ran for 24 weeks in issues 50 – 73. The illustrator was initially Ian Knox. Barrie Appleby took over from issue 67 and drew the strip till the end of the series in MFC.

Barrie Appleby remained in charge of the feature after it transferred to BUSTER and became a one-pager. The first combined issue of Buster AND MONSTER FUN was cover-dated 6th November, 1976. Terror TV ended 68 weeks later in the issue with the cover date of 18th February 1978. It missed one week (October 8, 1977), so the total episode count in BUSTER came up to sixty-seven, all illustrated by Barrie Appleby. The strip made five front-cover appearances in colour.

The vast majority of the episodes lampooned real TV shows and required Barrie Appleby to draw lots of caricatures of real TV personalities. My knowledge of British television of the seventies is patchy and only a few of the names make sense to me (Fawlty Terrors = Fawlty Towers, Doctor Boo = Doctor Who, Looterror Colomboo = Columbo, John Claws = John Cleese, Jimmy Madville = Jimmy Savile, etc.). Below is part one of the complete list of the episodes with a few scans of the pages that I find to be interesting or nice. Part two will follow soon. Have fun identifying the names of the shows and TV stars and reporting your findings in the comments section :) 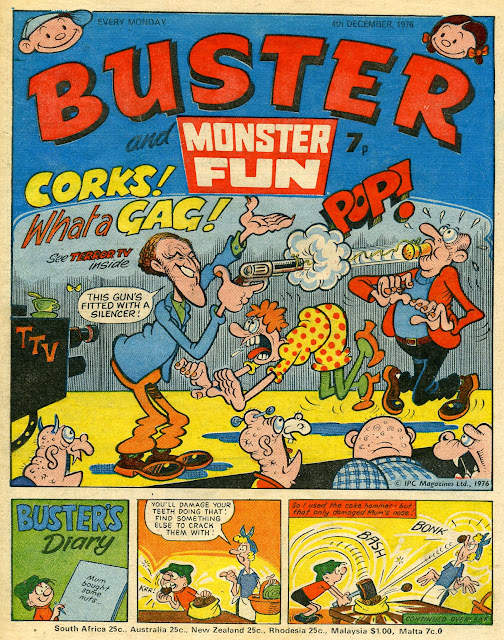 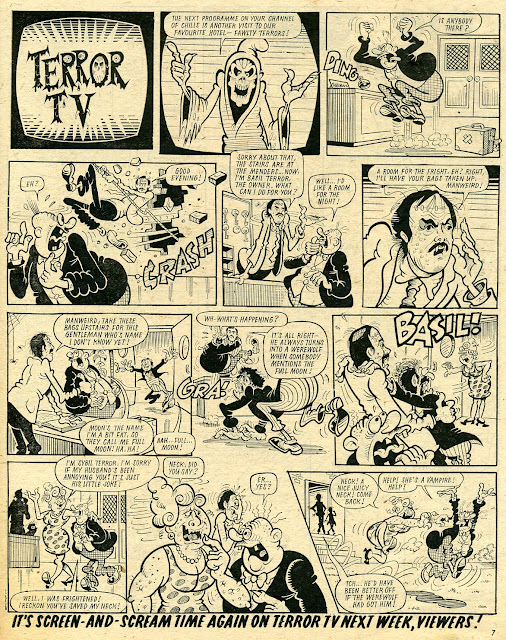 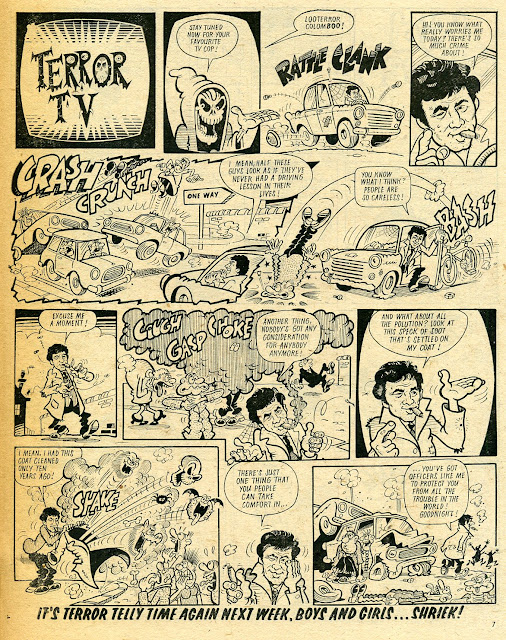 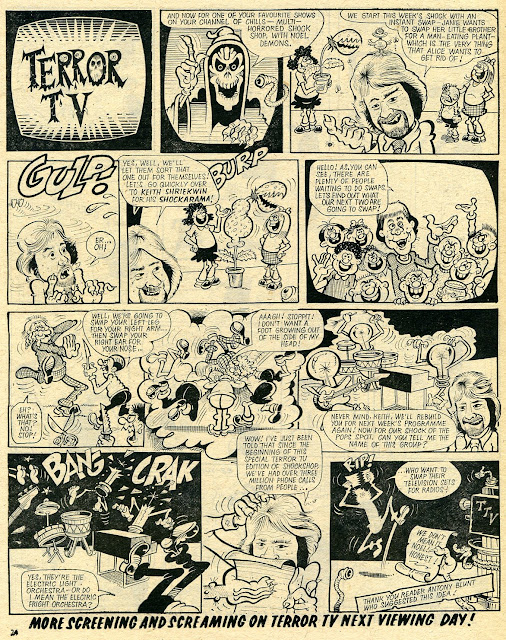 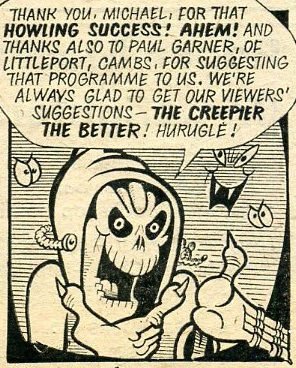 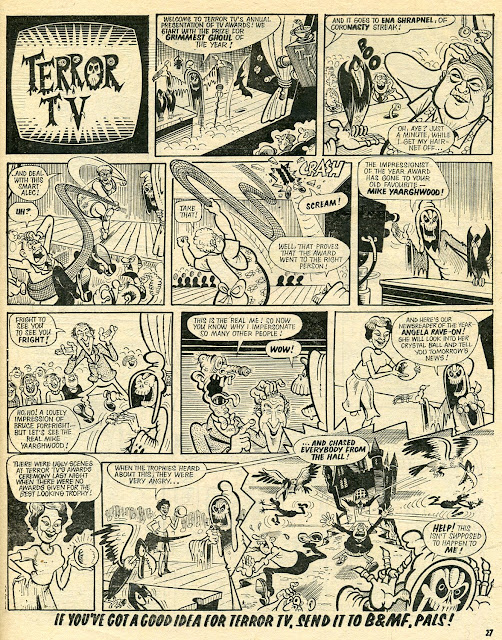 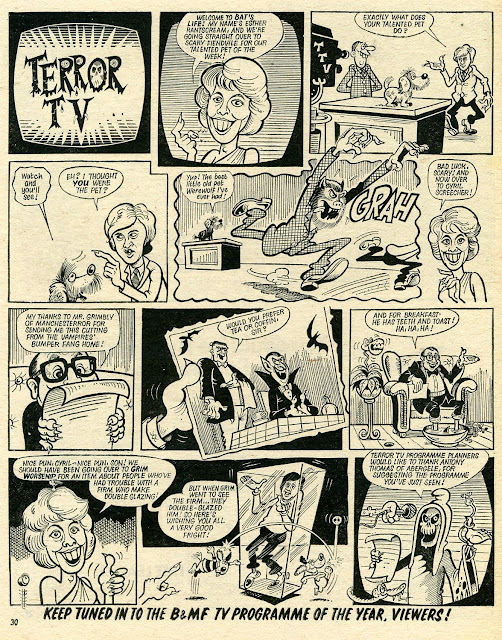 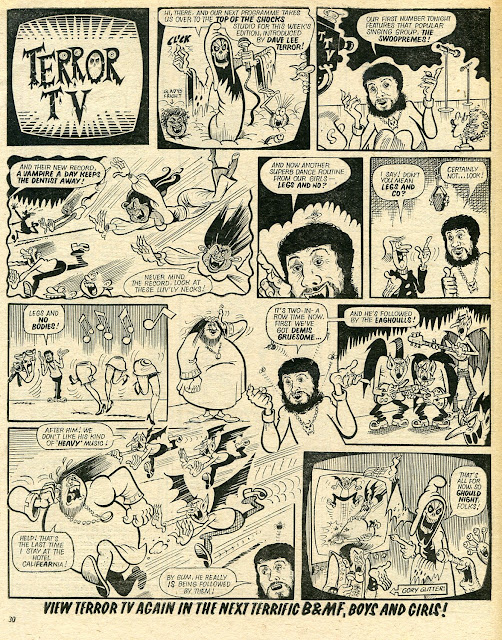 COME BACK SOON FOR PART TWO OF THE COMPLETE LIST OF TERROR TV PROGRAMMES!
Posted by Irmantas at 11:53 PM 4 comments: